Feeling somewhat refreshed from a night's sleep in the cabin, I set off at about 10:30am to tackle another day of riding. First I had to remember to put everything back where I found it in the cabin, which I hope I did correctly. There was the water pump to unplug, and the heater to turn off, and the TV and DVD player to unplug as well, plus of course the dishes, making the bed and turning off all the lights. Plus the water heater had to be shut off by throwing the breaker switch for it. Oh, and there was something called a burn toilet, which basically incinerates what you flush away...I hope I used it correctly because I'd never seen anything like it before.

Anyway, after heading out, got an immediate idea of what the day was going to be like by having to climb a steep hill before actually getting to the main part of Brinnon (which is actually moderately populated, just very scattered). The climb wasn't too bad, but it was just a warning shot. The real action came a few miles out of Brinnon when I started heading up Mount Walker, a small mountain on the fringe of the Olympic range. The climb was about 1,500 feet in about 3.5 miles and took about an hour, after which my legs were hurting pretty badly. Even the long descent on the other end didn't really help matters. The soreness didn't go away, either, but stuck around all day, mostly because every couple of miles there was another climb (usually not that steep but enough to force me to shift into the biggest chainring and plod along for a while). These hills kept slowing down the ride, plus the winds in my face on the other side of the hill kept me shivering all day. I'd sweat like crazy climbing, then hit the cold headwinds as I'm trying to recover. All of this contributed to some early exhaustion and a lot of rest stops, so I didn't even make it to Port Angeles until almost 7pm.

Along the way, I did see some pretty nice scenery, as usual, so it wasn't all bad. There were mountains to my left most of the day, but the views of the coastline faded as Route 101 went mostly inland. The few times I did get back to the coast, this was followed shortly thereafter by a long climb back up into the woods. (sigh) Here's one of the few coastal views, early in the morning as I was leaving Brinnon: 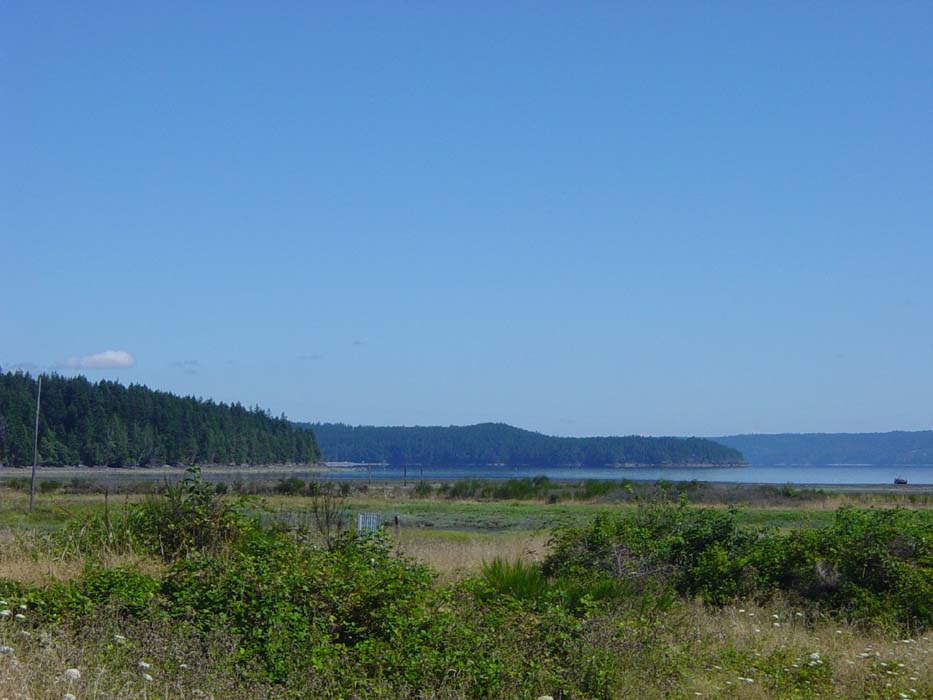 Another shot of Brinnon, showing the mountains behind the few small buildings at the "center" of town. The white one just right of center is the only motel, and is probably where I would've stayed last night if not for the cabin. By the way, no, the mountain isn't erupting, that's just where the cloud happened to be when I took this shot. Also, even though it's gloriously sunny, it's still cool (about 60 degrees). 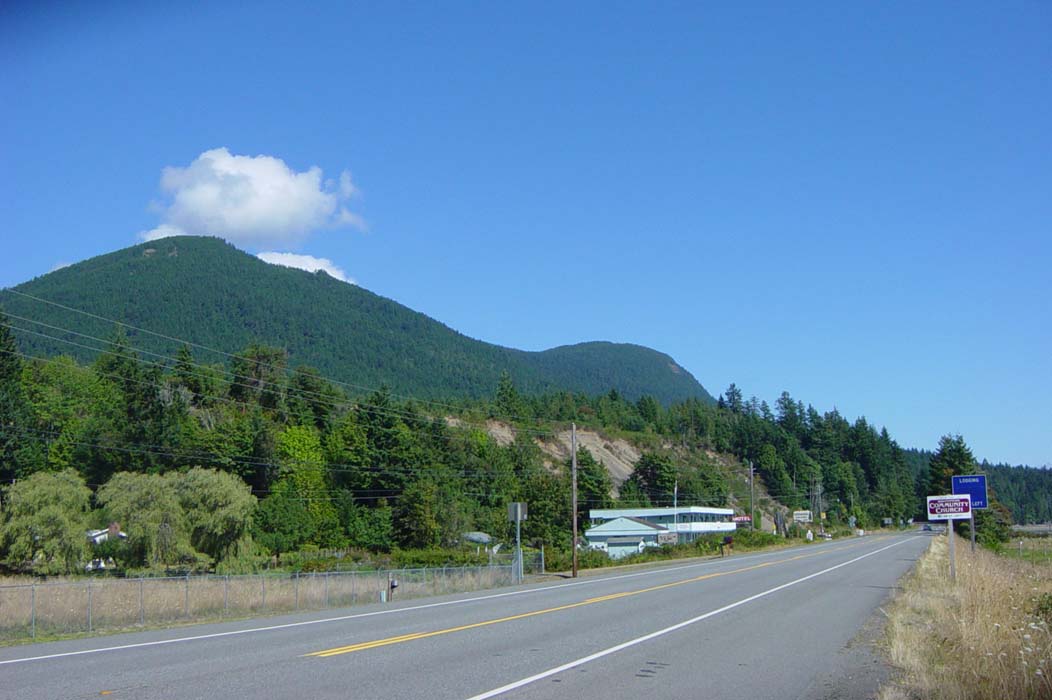 This next pic was taken about halfway up the mountain. This hill was to the left of me at the time. 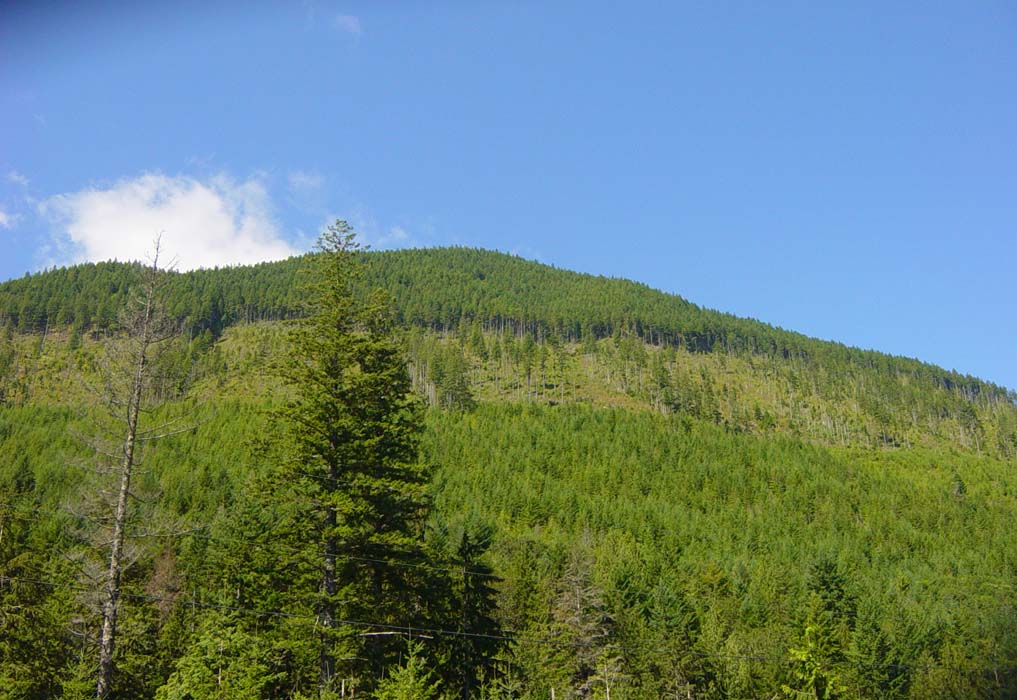 After climbing Mount Walker, there was a very long and steep descent, which I needed pretty badly. Here's a look at the road down. I was at least able to console my aching legs with this amazing view. 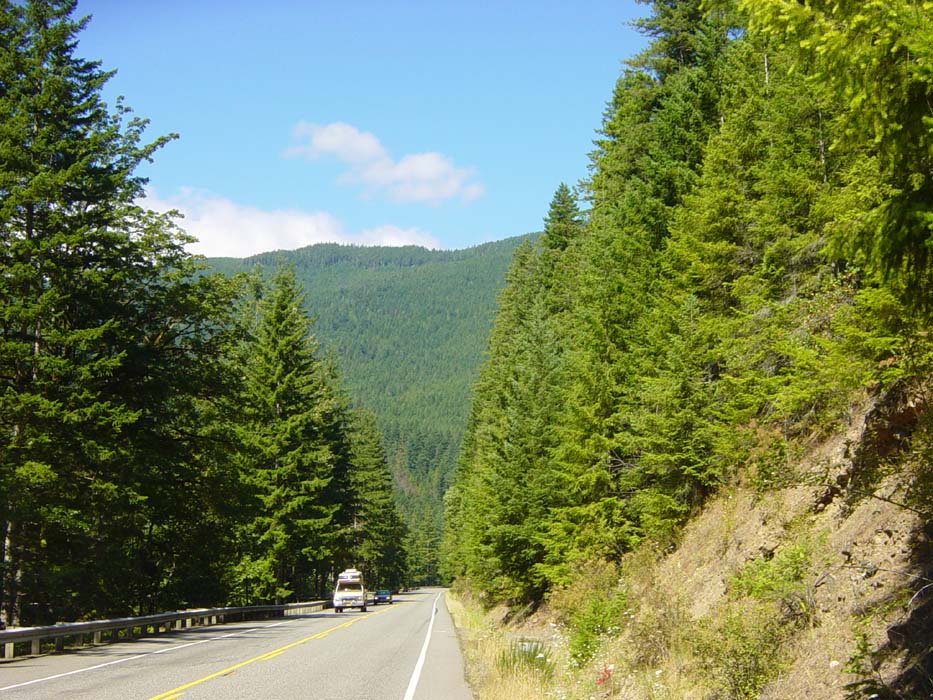 At one point the road left the trees and I came upon a rare sight in this area, an actual farm. This was one of only a few open spots with a good view to my left. Also, it happened to be on a downhill area, so I could afford to stop and take a picture. The brown sign to the right of the road announces a campground ahead, which are everywhere. If I needed to camp, I could do so with ease, pretty much anywhere along here. However, I'm hoping for a hotel. I'm going to be sore enough that I'll need a nice long rest tonight. 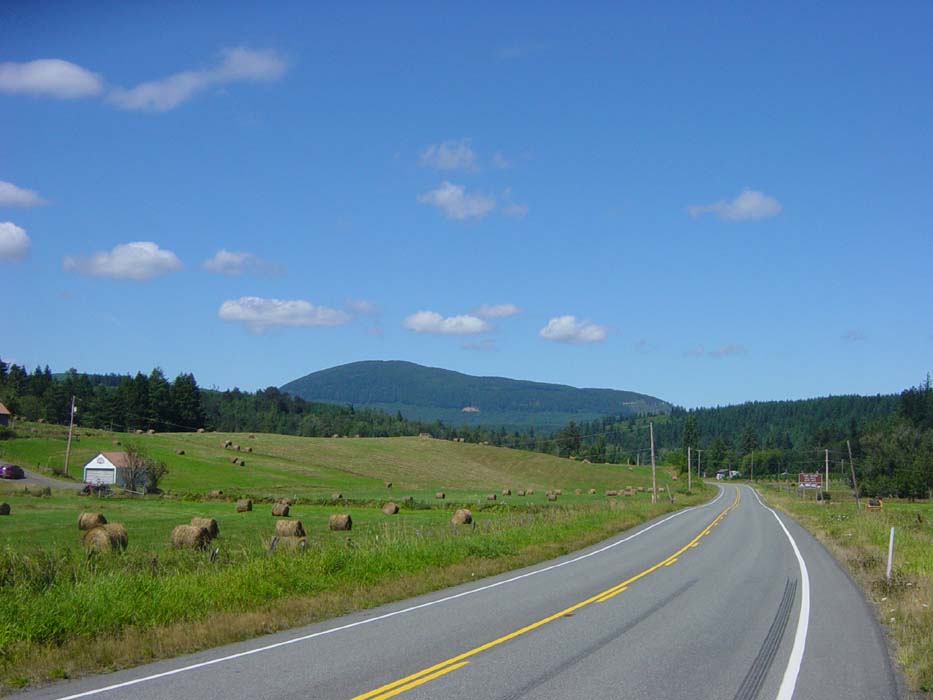 This is a view of the Olympic Mountains, taken as I reached the northeast section of the Penninsula and started slowly turning west. 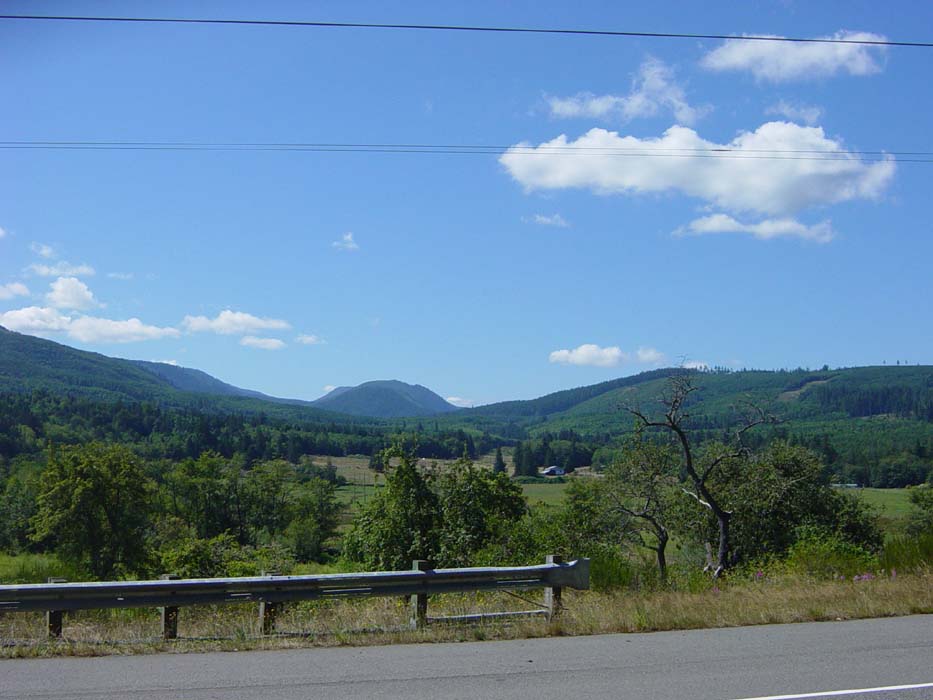 Atop one of the long climbs I whined about earlier, I managed to catch this view of Discovery Bay. There was a cafe by the side of the road here, along with one of the many little espresso shacks that seem to be everywhere on this side of the country, and behind that the view was open. Another long climb awaited me here, and also, they had recently repaved about 20 miles of road, so for the next two hours I had to deal with gravel all over the shoulder. Not that it was much of a bother, it just made me go slower on the descents. 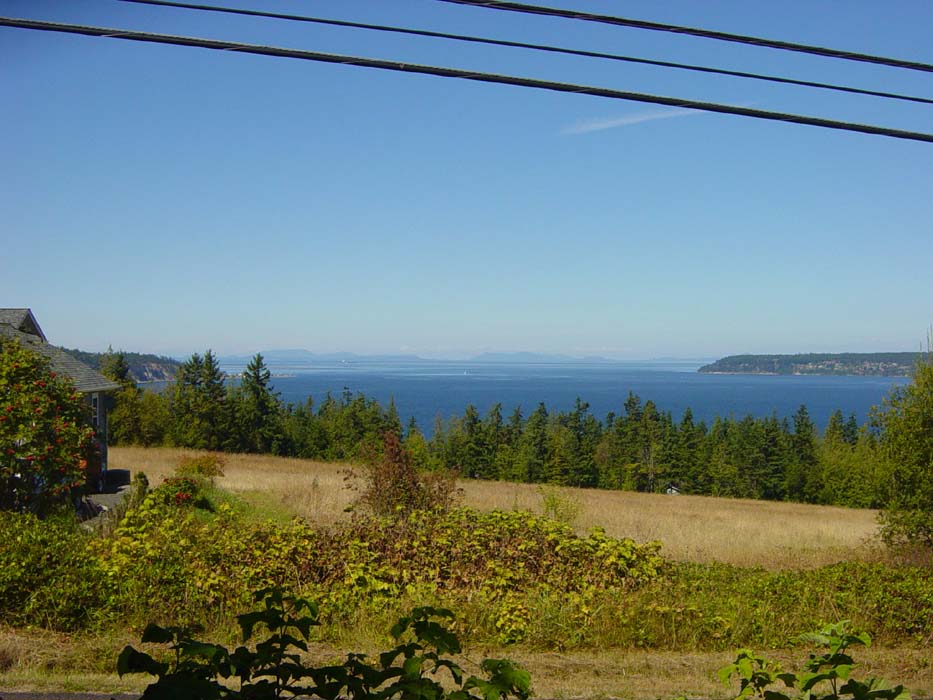 Speaking of descents, here's another nice view heading down with the mountains ahead of me. By this point I'm moving west along the top edge of the Penninsula. 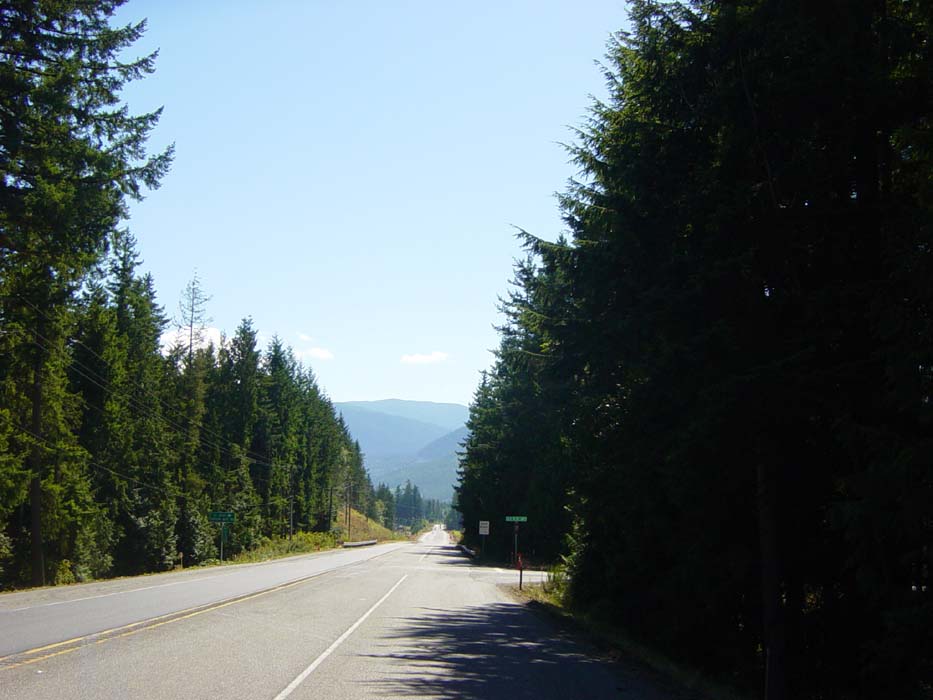 More water, this time part of Sequim Bay. A little bit further there was a historical marker describing how the bay was discovered and the various Native American tribes that occupied the area. There are tribal lands all over this part of Washington, too many to mention. Native American galleries and gift shops are everywhere, along with the ubiquitous casinos. 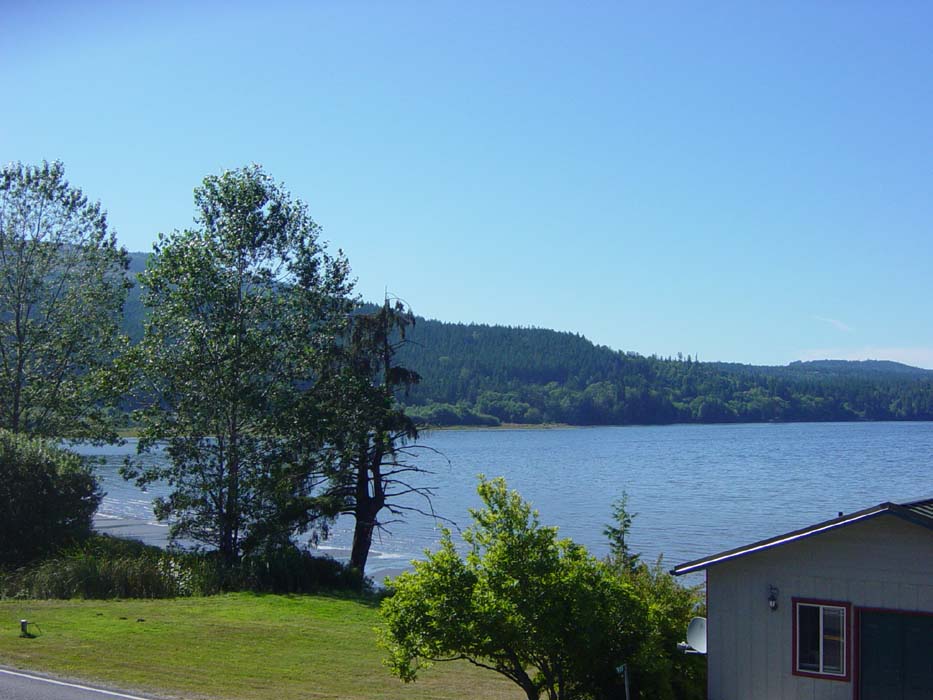 Here's a sign you won't see back in Ohio. (I'm talking about the one on the left, obviously.) 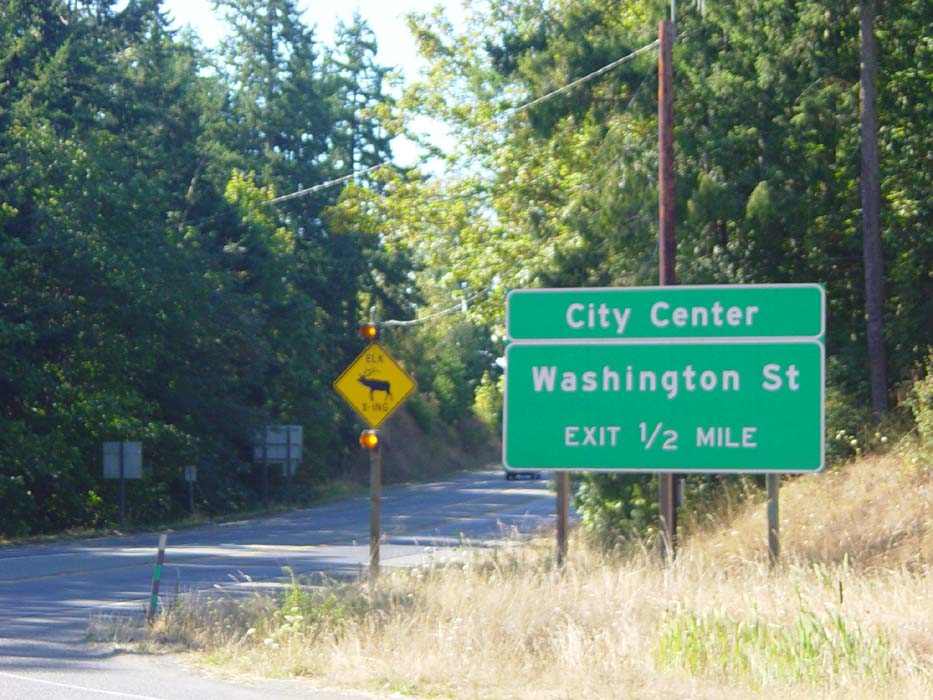 As I approached the town of Sequim, I spotted a little sign telling bicylists they could exit and take a bike path the rest of the way to Port Angeles. Since the road was so crowded (apparently lots of people head out this way, including plenty of trucks) I decided to try it. The path went through the main part of Sequim, then broke for about a mile, and when I picked it up again I'd past mostly through town. Then it wound through the hills, past more farms and country roads, twisting and turning and making sudden, very steep climbs and descents that made me wish I'd stayed on Route 101. Add to this the fact that the surface wasn't all that smooth and I wearied of the path very quickly, eventually heading back to 101 to continue on into Port Angeles. This did add several miles to the ride, which should've been about 64 miles.

I'd hoped the path would've been more scenic, but virtually all of it went through woods so thick there was little to no visibility. Here's one exception, looking out at the mountains again, past one of the farms I mentioned. 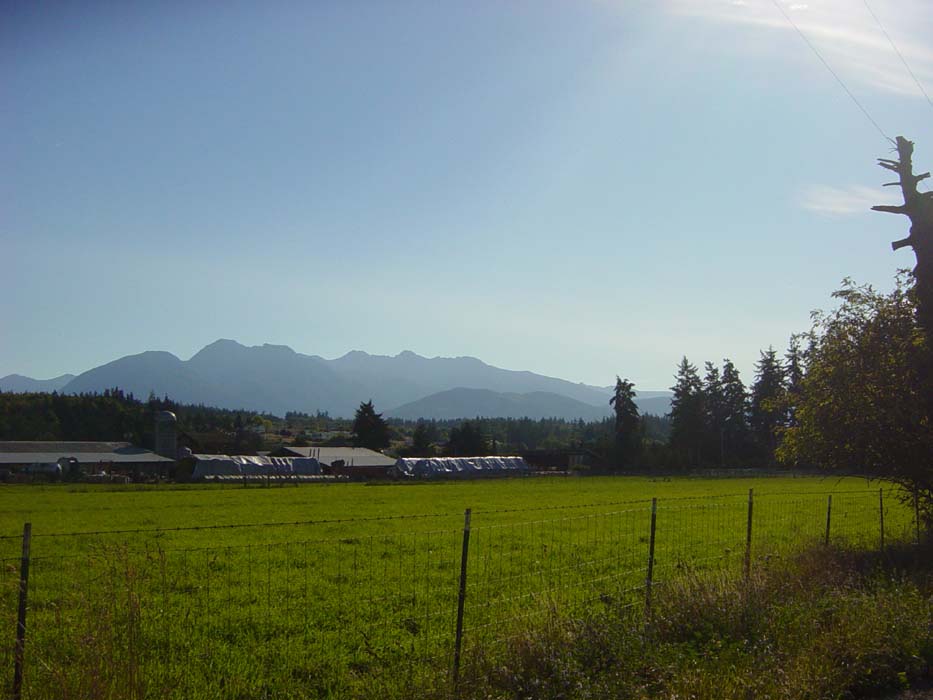 With the path left behind and only a few miles left to go, I was hoping for a nice long descent into Port Angeles, but instead I had one more huge hill to force my weary legs to carry me over. Finally in town, I hunted for a while for a cheap hotel, finding that most were full, which means I arrived at a time when some event or other must be going on in the local area. Fortunately there were rooms available at the Riviera Inn, and on the ground floor too. (I really don't want to haul that overloaded bike up the stairs after a long ride.) After a quick run for my traditional 2-liter of soda and some pizza, I was back in the room enjoying a relaxing night.