Gualalalalaaaaaaa...there's a name that just never gets old. Ah well, it was a nice town to visit while it lasted. The luxury hotel room at half price was quite the worthy investment, too. I still spent more than I wanted to, but that's nothing a trip to a campsite can't cure. Besides which, hopefully in a couple of days I'll be visiting family in Frisco and can avoid hotels again.

So with that in mind I set off at about 10:30 and the sun was already out, with a weak northwest wind and a pretty nice day shaping up. Here's what the terrain looked like for the first few miles or so. Nothing too bad yet, but the coast was pretty boring with nothing around but that yucky brown grass or whatever it is. 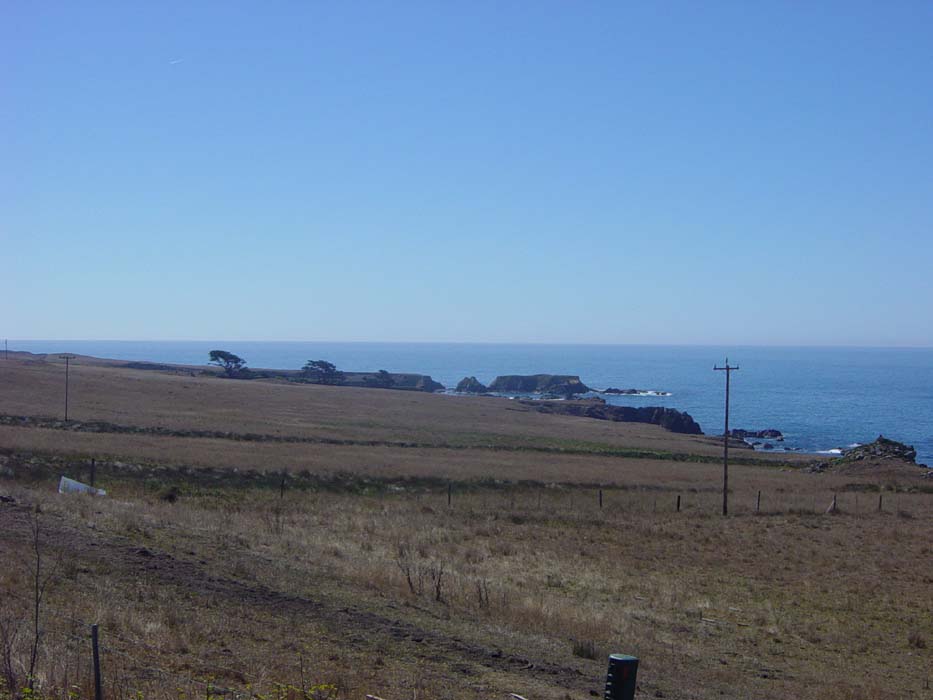 The hills began shortly after this, basically more of the same from yesterday, with long climbs leading to breakneck descents and more climbing to follow. The views weren't even that great. Here's one: 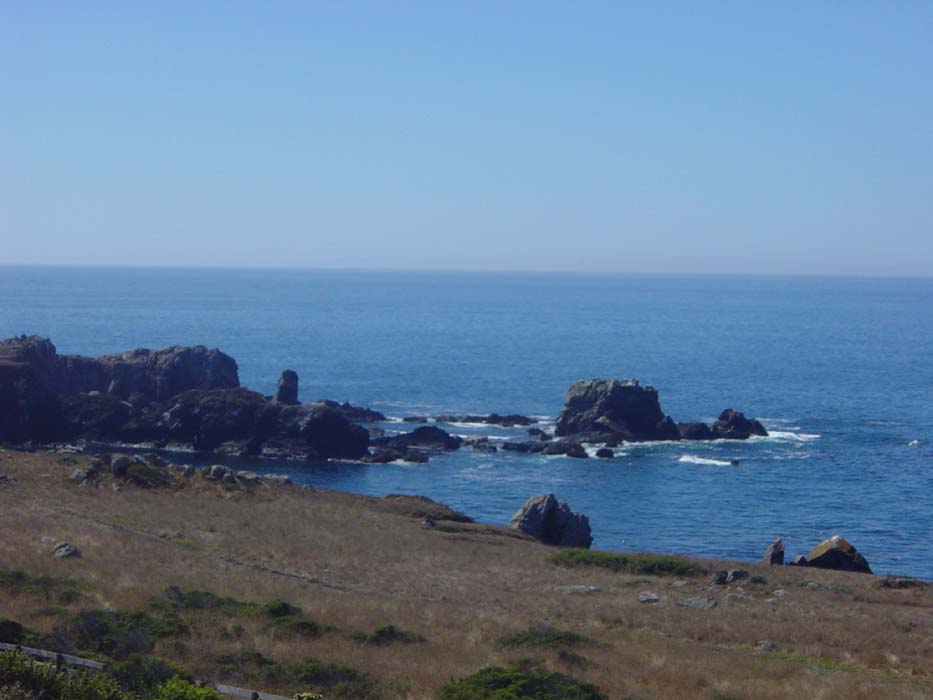 As usual, every little bay or cove brought another painfu set of hills. Here are a couple of pics of views from up top. 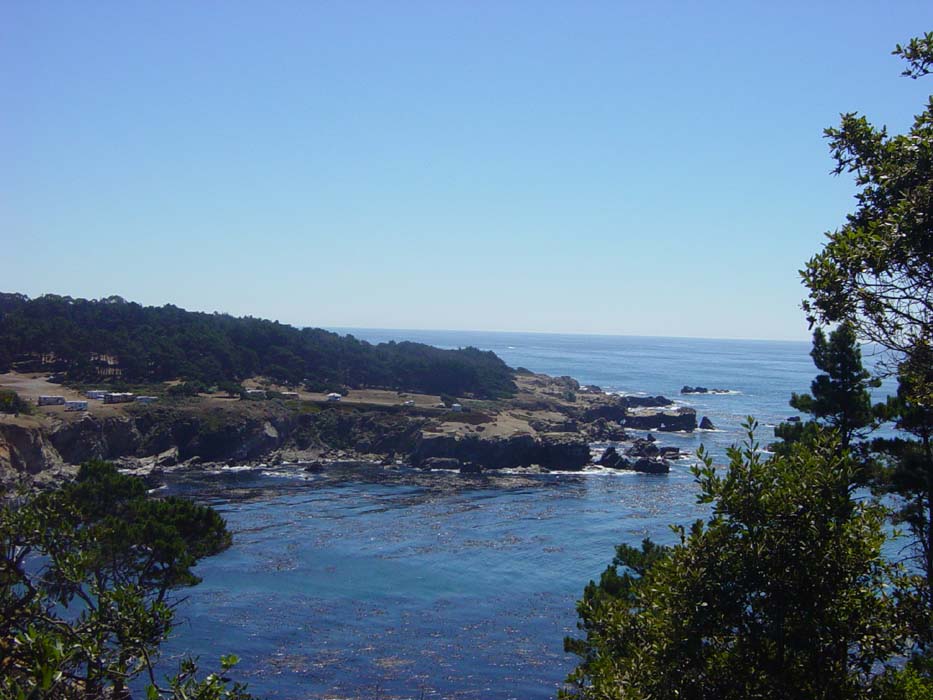 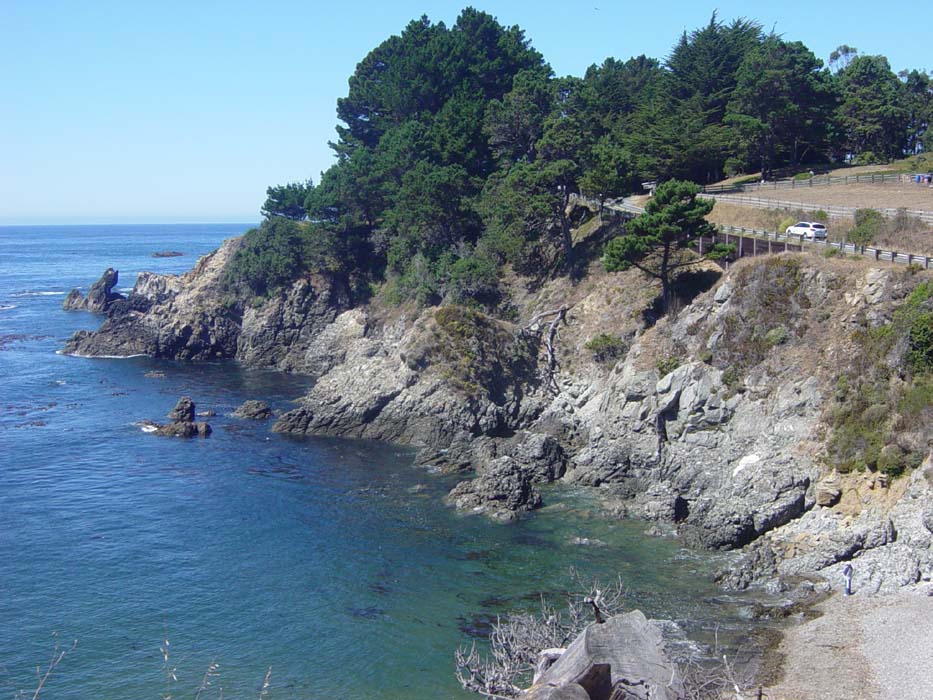 This one was kind of nice, looking almost straight down at the water, with a little sailboat off the coast for some background. This was one of those places where the road had not much of a shoulder, no guardrail and nothing but a steep drop a couple hundred feet to the water. 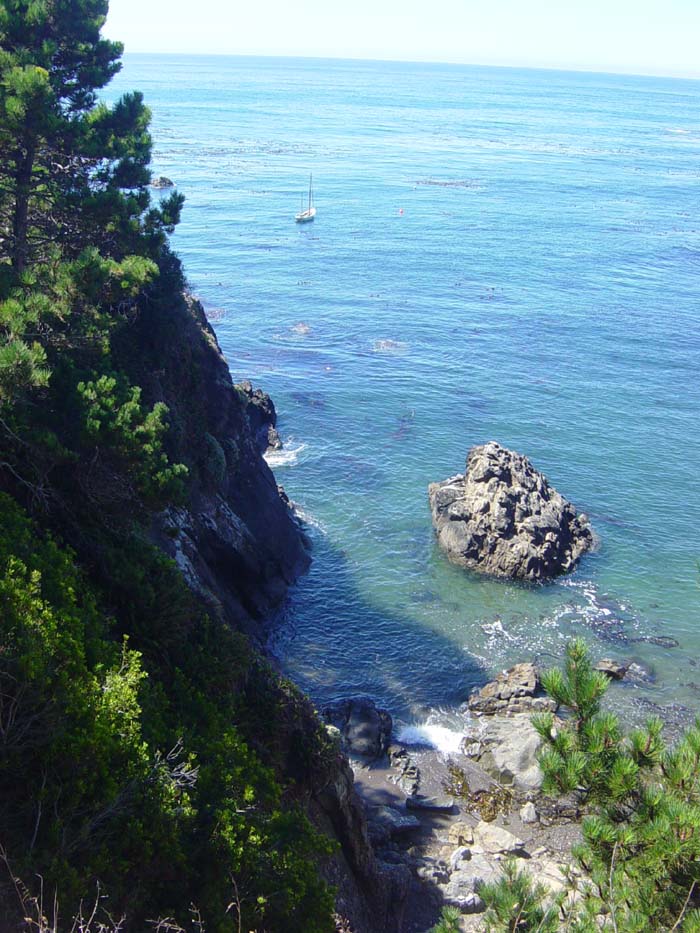 That tower there is actually a kind of totem pole that sticks up out of a hotel resort that probably cost a fortune to stay in. 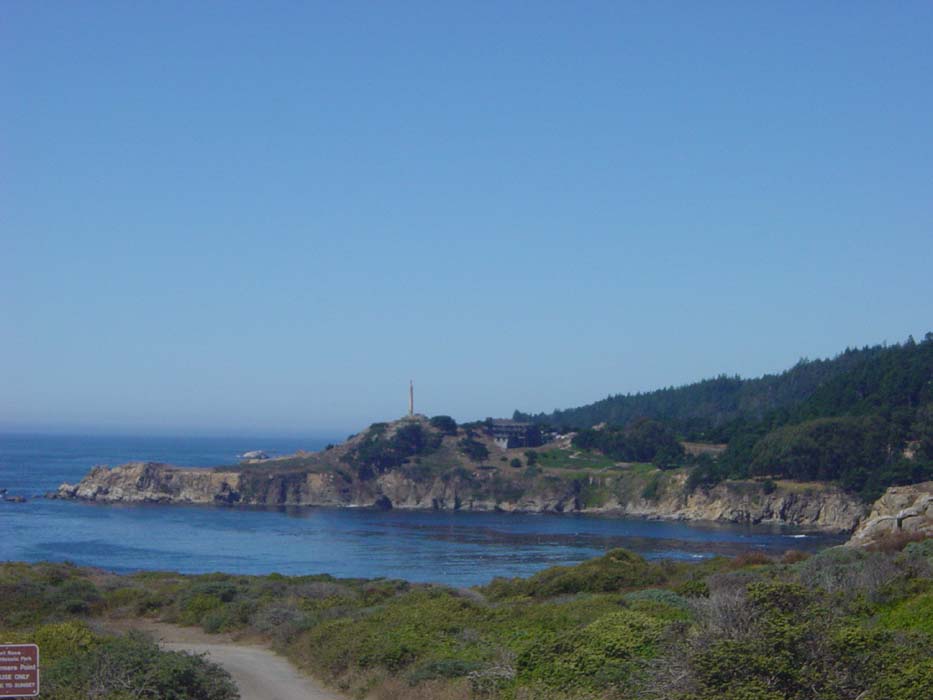 Here's another nice picture of an interesting chunk of beach, complete with the road hooking around up top. Keep in mind the road I'm on right now goes straight to the left, drops down almost to beach level, then climbs all the way back up to there. I have to tell you, it gets pretty discouraging knowing I have to go through something like this every mile or so. 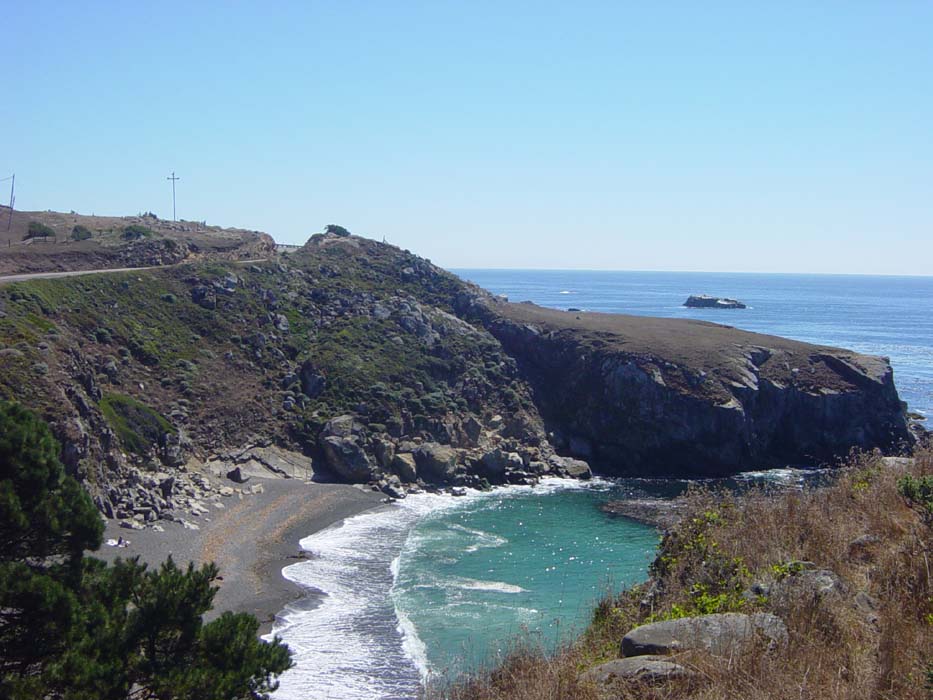 Yesterday I talked briefly about what the rest of the land looked like when I wasn't near a beach or cliffside. Here's a pretty typical look at the normal terrain around here. Basically, if it didn't have a rocky coast in it, it wasn't worth looking at. 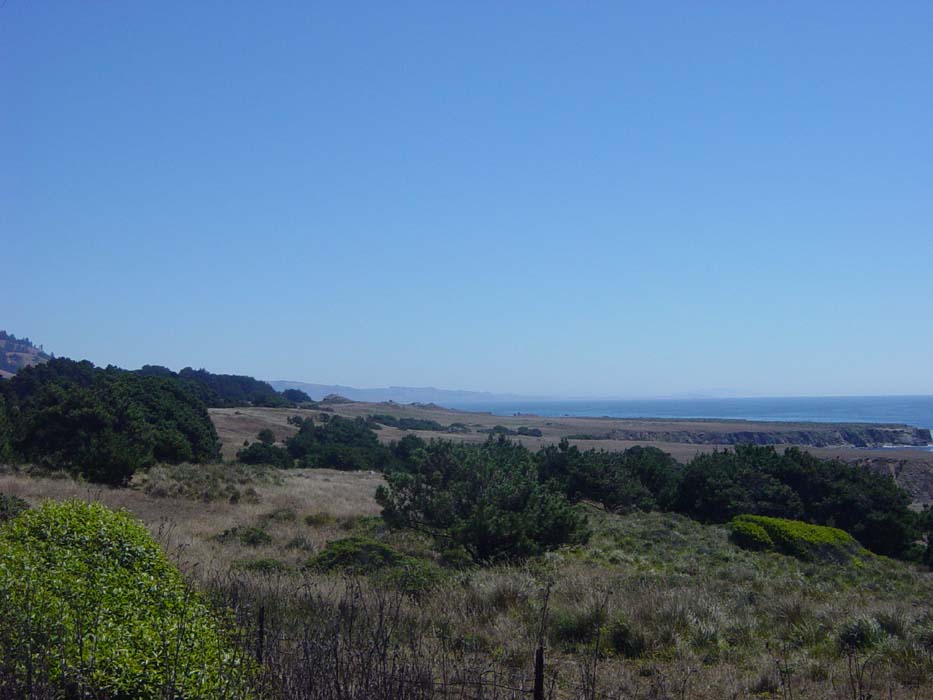 So I went along the rest of the day muttering under my breath about every one of those hills I was talking about, but little did I know what I was really in for. Just before the town of Jenner, I came to a real monster climb that went on for miles. Plus, it was right on the edge of a steep cliff, often with little or no room for error to my right. I was getting close enough to San Francisco that traffic was fairly heavy, too, with trucks passing on a regular basis (most of the RVs were heading north, though, since it was Friday and people were leaving town for the weekend). So not only am I creeping up this steep slope, I also have to worry about traffic, and where I'm going to find a space to stop for pictures like this: 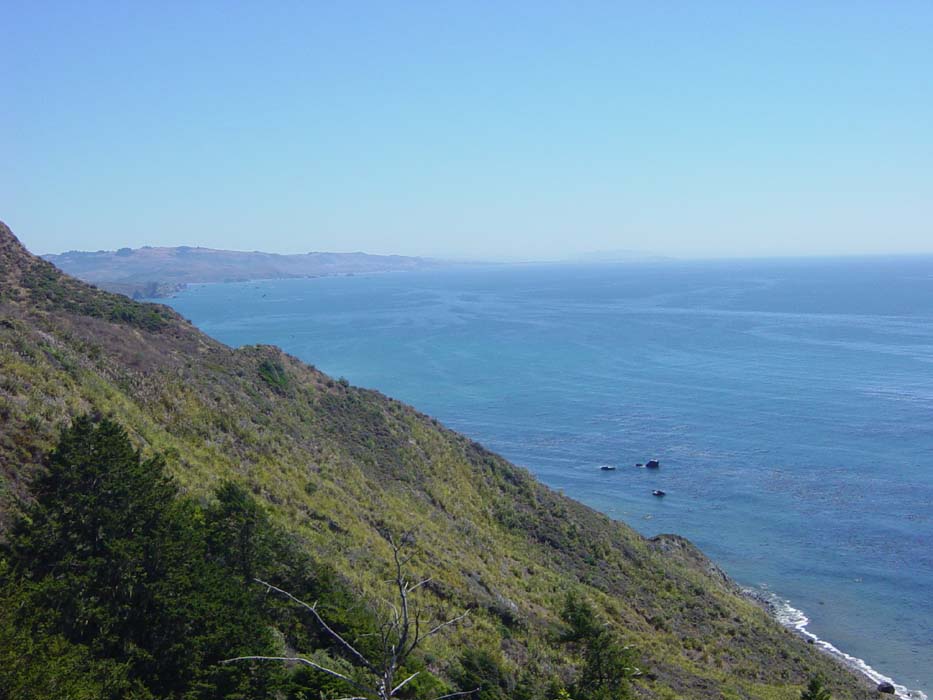 Here's another one from a little bit further on and a couple hundred feet higher up. 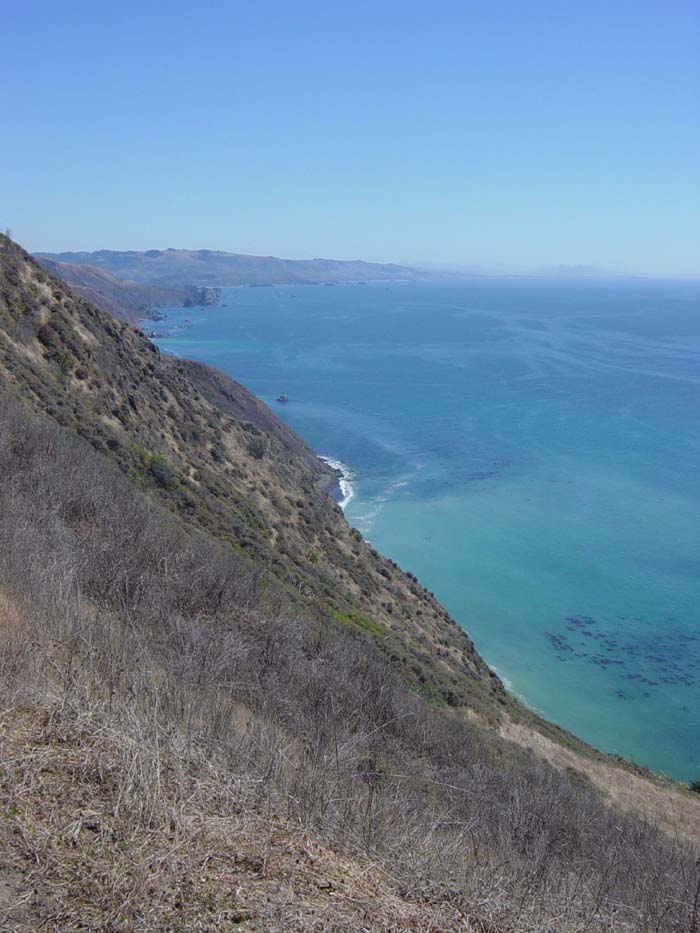 This one is similar except you can see the road starting to descend the other side. It went down a ways, then started back up again, forcing me to climb almost the same distance again. While I was doing this, no less than a half dozen other cyclists came along and passed me at various points, usually when I was taking a break. Apparently it was bike touring day, or something. 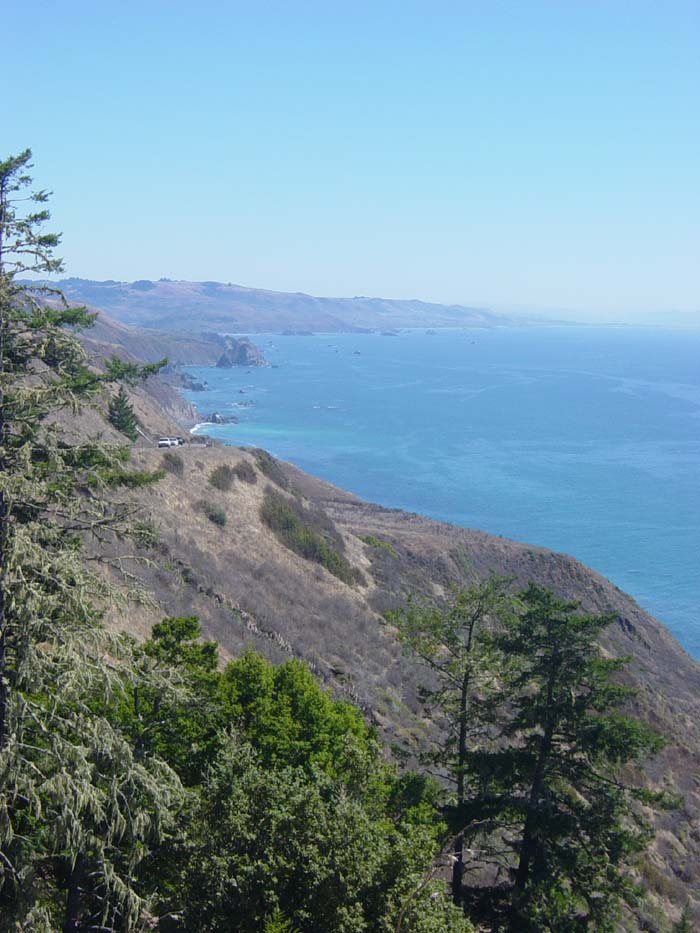 Another pic from the cliffside, looking down a bit so you can see just how high up this is and how steep the drops are. 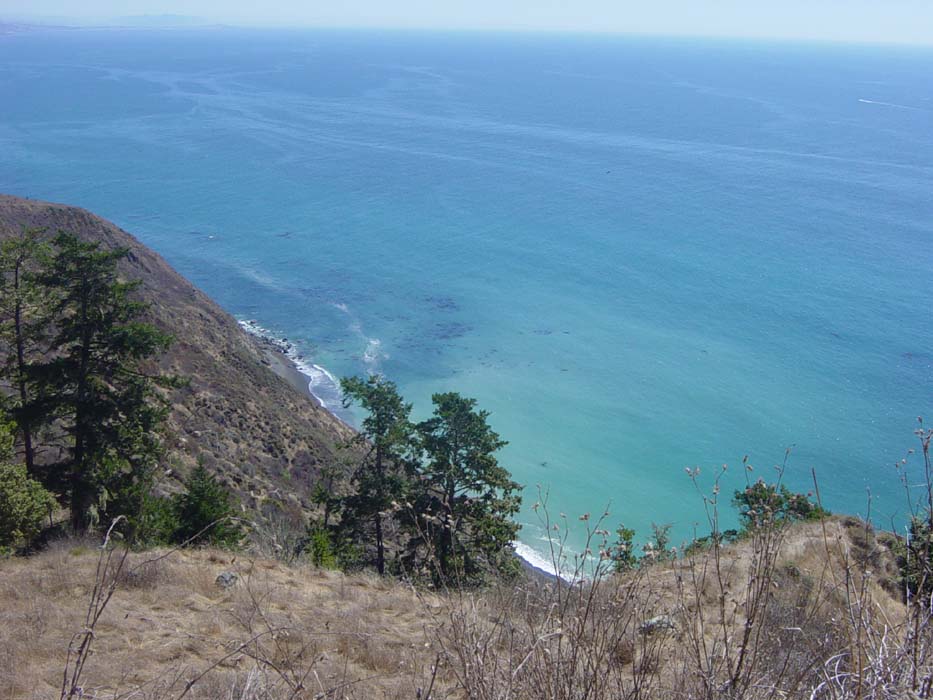 Random Wildlife Sighting: At one point I came to a pullout where a couple people were stopped in a car, looking out over the ocean. I was tired enough to take a break and chat with them about whatever it was they were looking at. Apparently there were humpback whales passing by. If you look real close on this picture, just slightly left of center, there is a barely visible plume of white coming up out of the water. That's one of the whales right there. Watching for a bit longer I realized there were at least several out there because they would sometimes breathe together, creating multiple plumes. The couple watching along with me explained they were from this area and had seen enough whales to know these were humpbacks, not grays or blues. I'd tried to spot whales before several times on this trip, but they either weren't there or the fog blocked the view, so it was nice to actually see some, even at extreme distance. 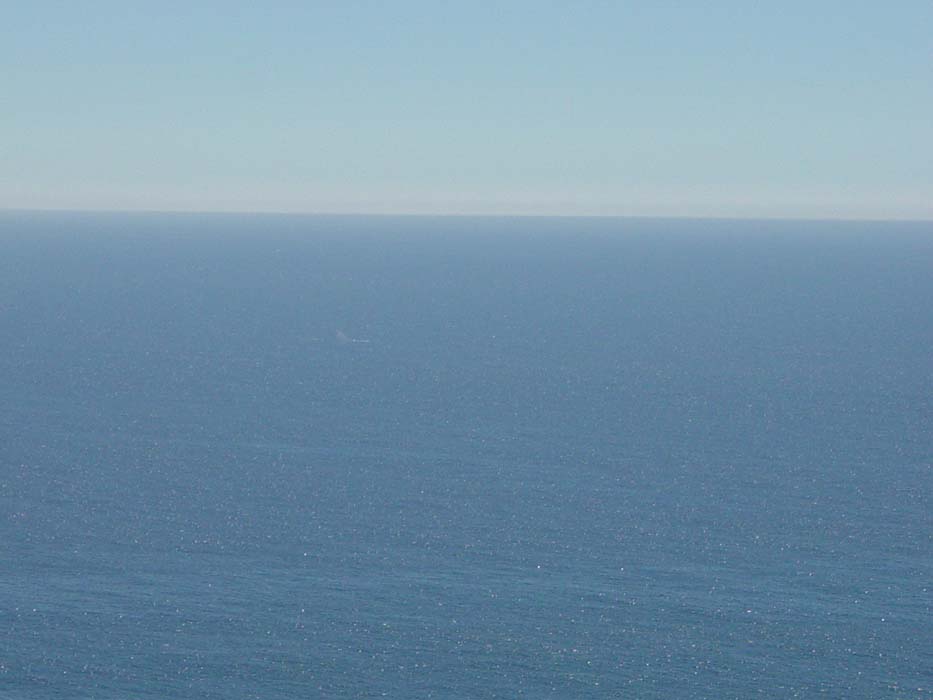 Finally I came to what I thought was the top of this severe climb only to look down and see I wasn't finished by any stretch of the imagination. There was another set of switchbacks heading down and left, followed by the usual hairpin turn and this nasty piece of work. You probably can't see it here, but wayyyy down there on the road, several of the cyclists that passed me earlier are working their way up this slope. 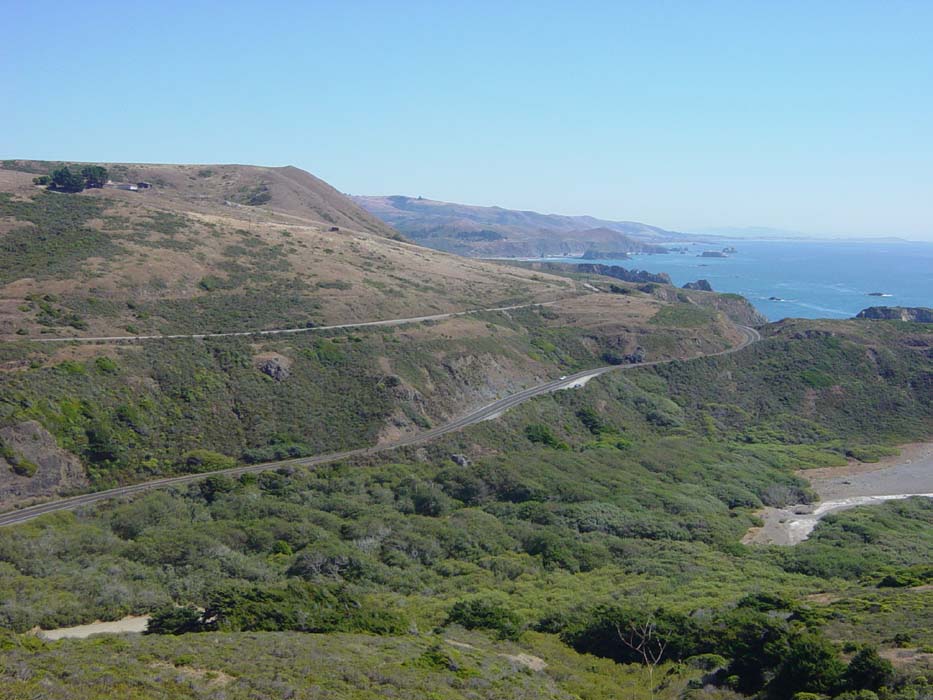 Well, somehow I managed to get through this, and with legs burning I made my way to Jenner, which is where I was told the road would get easier. Well, it didn't, really, except that there weren't any monstrous things like that last nightmare climb. Here's the terrain near Jenner: 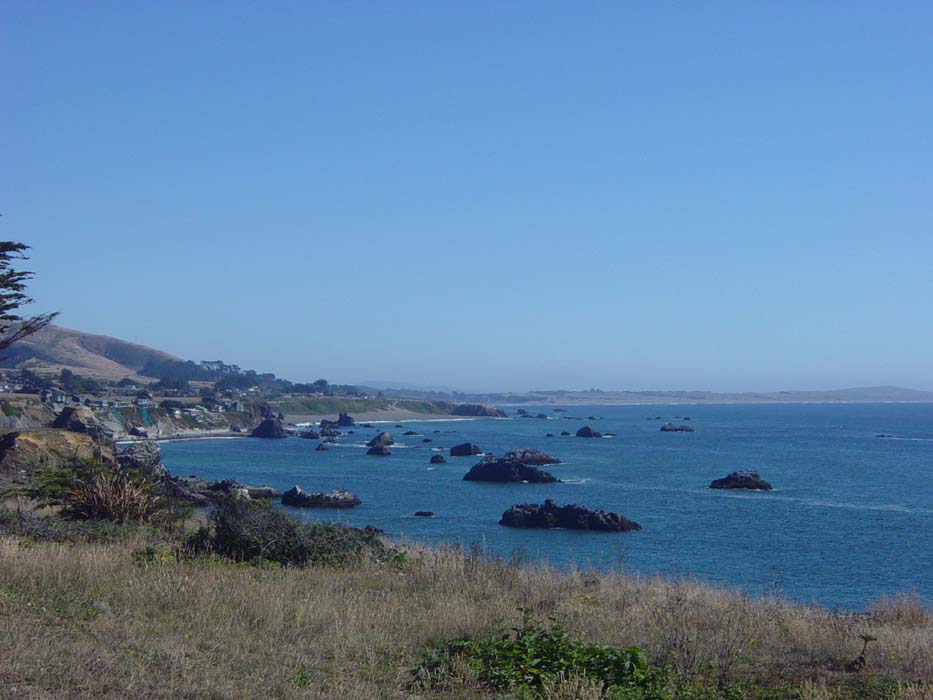 Another view of this bay, and notice just how close I was able to get to that rock, which was only a few yards offshore. 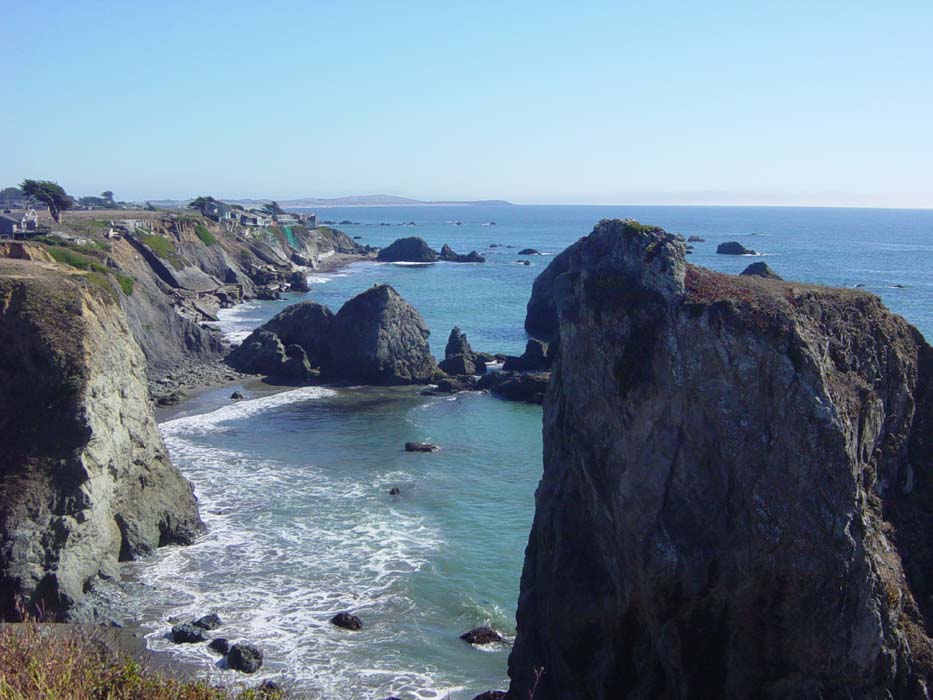 After this I rode on to Bodega Bay, by which time I was physically spent and also had started to get a bit of abdominal cramping, probably meaning the hot dog I had for lunch earlier didn't really agree with me. I talked to a local about where I might stay and how I might get on the Internet, but the hotel he recommended was full and the others wanted too much money, plus I couldn't get on the net and still have power to the computer, so there went my evening. I headed off to a campsite nearby, where I managed to get one of the last spots (tucked in amidst some RVs near the beach), and then headed back to town for dinner and a soda. On the way, the fog rolled in, and it started getting cold. By the time I finished dinner and got back, this is what the sunset was looking like: 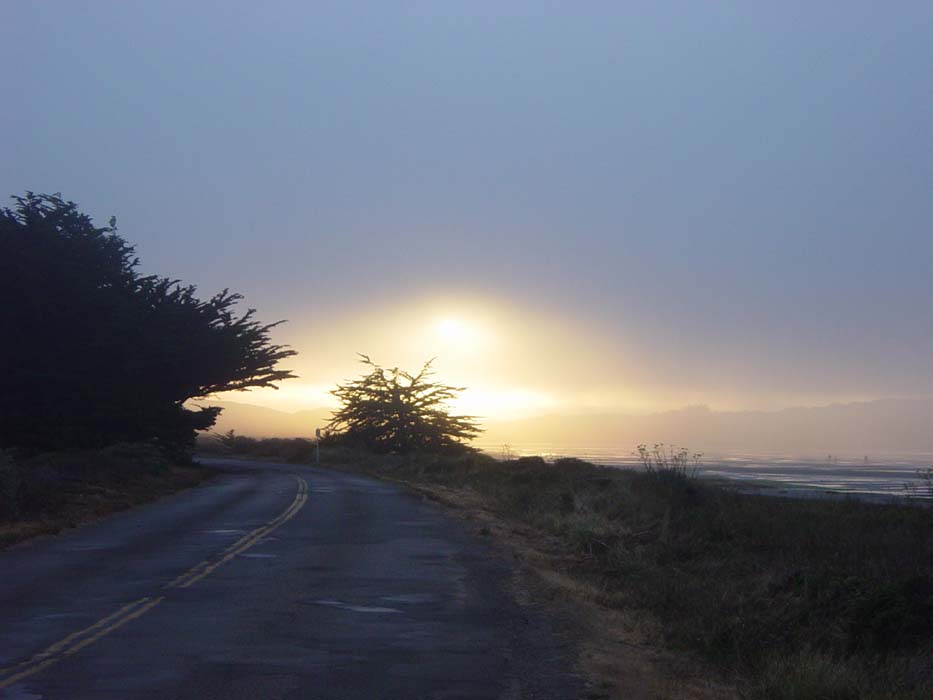 Looks nice, but what it did was lower the temperature so much that I spent the rest of the night shivering in my tent. Plus, the abdominal troubles got worse so basically I just huddled there all night wishing I'd paid for the hotel after all. Ah well, at least tomorrow I should be in an actual house for a change.