For the last few days it seems like all I've done is complain about the hills, and while I do indeed enjoy complaining, and will often whine just for the sake of whining, I have to say the endless climbing really got to me. When I was working my way up that nightmare cliff after Stinson Beach, and then started to descend the other side, thinking I was done with it, and then saw through the fog the switchbacks winding their way up the next set of climbs...well I must admit I came pretty close to stopping the trip in San Francisco after that. When I was doing the cross country ride, though, I had the same thought many times and kept going anyway, eliminating the heavy trailer as my way of dealing with it. This time I figured after a day off and some rest, I'd try to plan the rest of the trip so as to avoid the worst of the hills, if at all possible. Additionally, I determined that instead of trying to force myself into extra mileage on tough climbing days, I'd instead focus on taking more breaks, going fewer miles and not stressing out and getting frustrated by the difficulty level. Then I resolved quite firmly to press on and eventually complete the goal of reaching the border of Mexico, even if it takes a few 30 or 40 mile days in there to make it happen.

The day off was quite refreshing and enjoyable, owing almost entirely to the hospitality of my relatives Bobby & Betsy, whom I hadn't seen for way too many years. They set me up with a room and food and Internet and cable for two nights and I was able to get the rest I needed, leaving the house only to do a 10-mile minimum daily ride yesterday (all on smooth, flat bike paths that were absolutely packed with people). I was able to watch about 10 total hours of sports, mostly NFL opening day games, and it was basically exactly what I needed. Furthermore, I was able to plan a route for the next couple of days that avoided some serious hill climbing in favor of lots of flats and straightaways through populated areas with plenty of food and water stops and potential hotels. If I'd gone with my original plan of heading out to Half Moon Bay, this would've pushed me up over a number of steep climbs. Instead, Day 25 was a smooth, mostly enjoyable piece of cake that would've been far longer except for a few factors I'll get to shortly.

First of all, I left about 10am, which is right around my usual start time (maybe a bit early even) and headed down to the nearby BART (Bay Area Rapid Transit) terminal, about 6 miles away. This was just reversing the course of my arrival on Saturday night, except that then I was also driven to the house owing to the fact that it was after dark. Today I didn't need that and besides I wanted to hit a bicycle shop on the way to pick up another inner tube (I realized I didn't have any fresh spares, just one that had some patches on it) and refresh my tire pressure. With that done I reached the BART station and waited for my train: 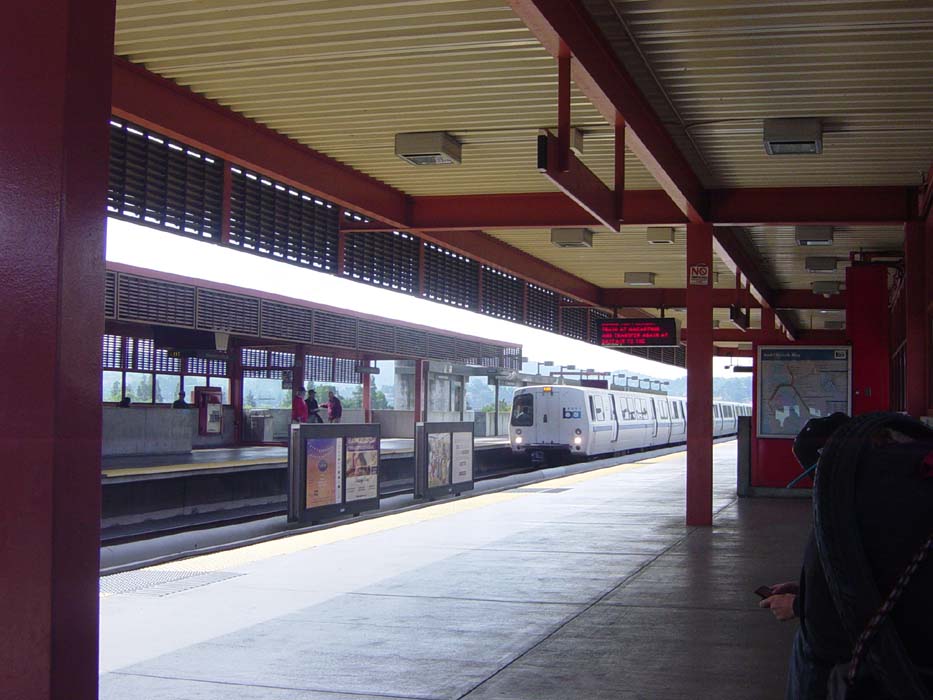 The BART is an extremely efficient and inexpensive way to get around; a ticket from Walnut Creek to downtown San Fran was $4.75 and the ride took about 20 minutes. Compare this to any cab ride (far more pricey) or a bus (wayyyy slower) or driving (gas, time, and where are you going to park?). I think if I lived in this area, I'd own a car strictly to move heavy things around, use my bike to get everywhere local, and ride the BART for longer trips. Judging by the number of people that piled onto the train the further along it went, I think I'm not the only one with that attitude. They let you take bikes onboard as well, except during rush hours, with the caveat that if the train is completely full, you have to make room for other passengers. That didn't happen for me because I got out at the Montgomery Street exit, but I'm pretty sure if people kept getting on the farther downtown I went, I might well have had to exit.

Anyway, once off the train I headed down to the shoreline and started off on the Embarcadero, heading south. The day was much warmer and less windy, and though there plenty of clouds the sun was out as well. However, because I've been in San Fran several times before, I didn't spend a lot of time touring. Instead, the goal was to get moving and go as far as possible today. The weather was perfect (except the light wind couldn't decide what direction to blow from, often fighting me early on) but I'd lost a lot of time waiting for my train and getting into town. Here are a couple of pictures as I left San Francisco proper. The first is from the ferry terminal dock looking back at the city: 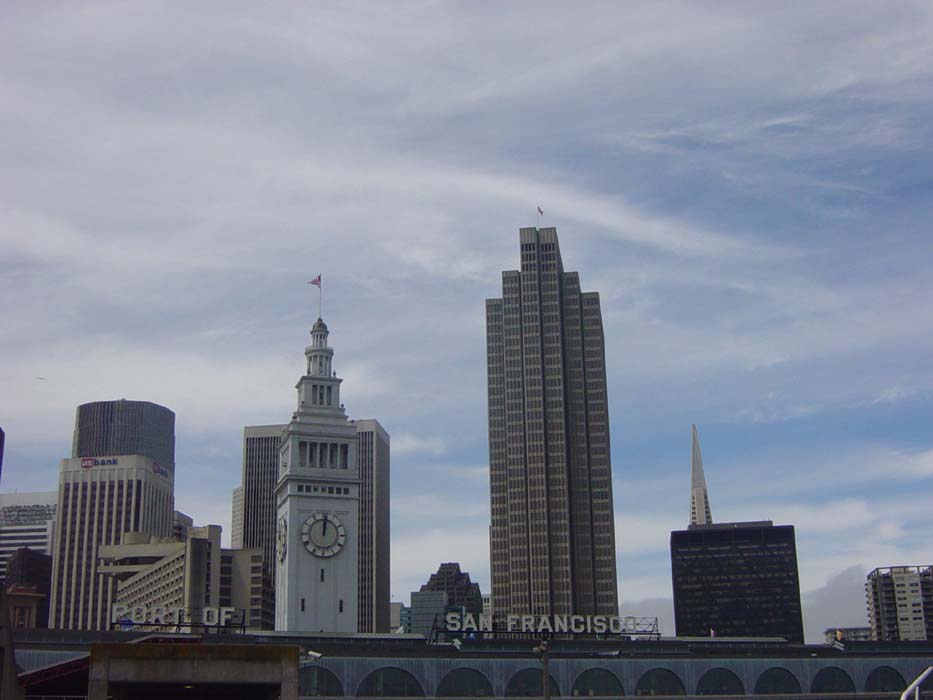 This is the Silver Gate Bridge....errr I mean the Bay Bridge. 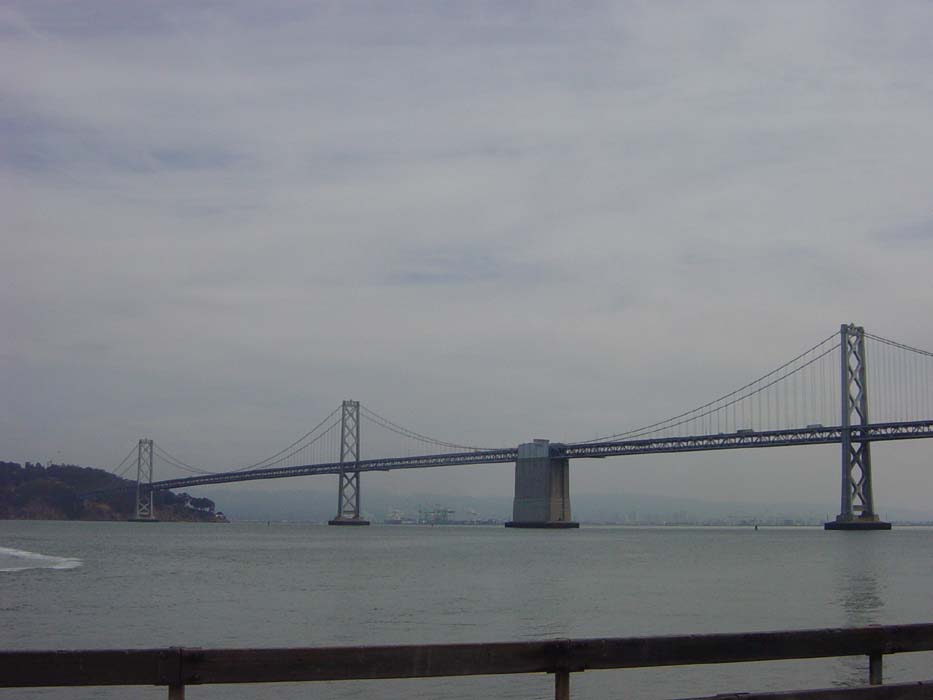 The route I took moved onto 3rd Street which goes right past the baseball park where the Giants play. (I won't name the park because I absolutely loathe the way corporate sponsors have their names on ball fields now.) 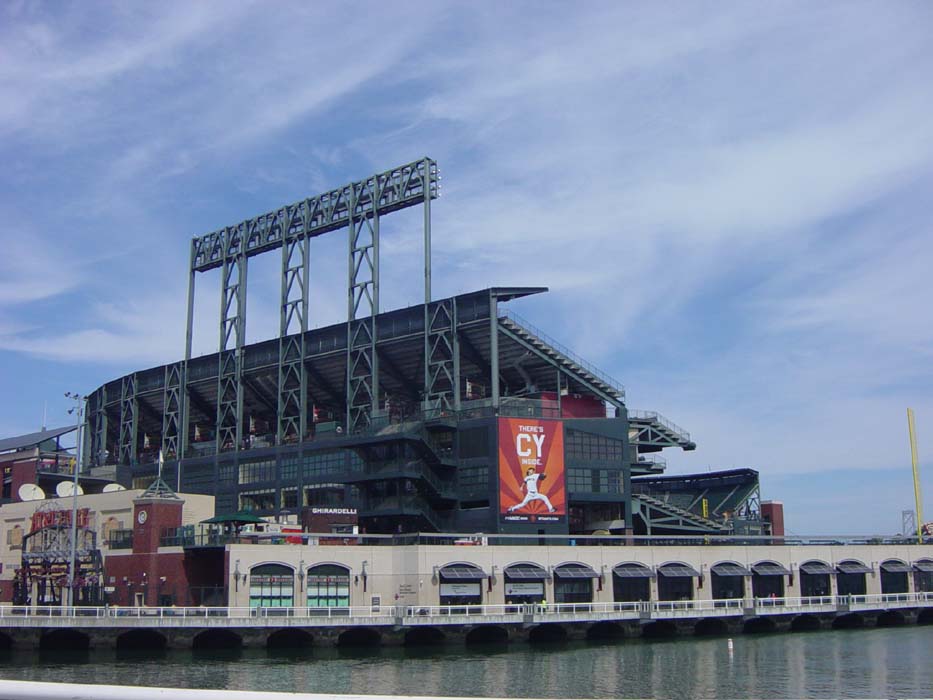 This view here is fairly typical of the roads I took heading south out of SF and through South San Francisco. Basically it was nothing but traffic passing by close to me (no bike lanes most of the day, unfortunately) and tons of streetlights. By the way, have a look at the light in the lower left hand corner. What's a red "T" mean? I'd never seen that before. Eventually I figured out that signal there was for the train (notice the rails that run along the street there, and the train station in the middle of the picture). San Fran has more than just cable cars, it has a ground-based light rail, and of course the overhead BART I mentioned before. Seriously, if you want to live somewhere and not own your own car, this is the place for you. 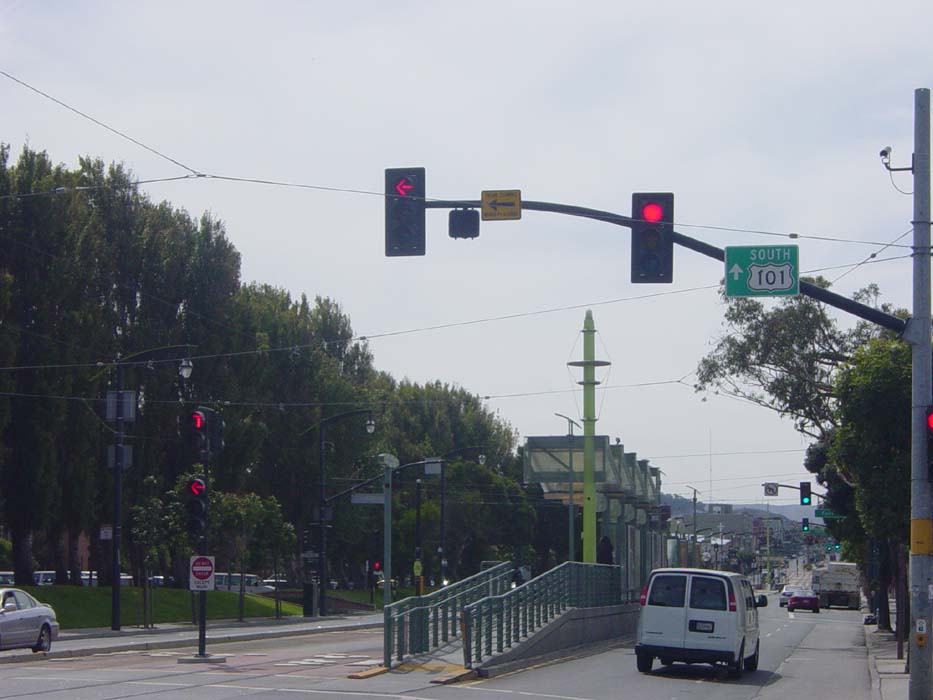 Eventually I got out of the industrial type areas and started passing through town after town without any breaks between them, just a continuous metropolitan area that was a "parade of Sans"--San Bruno, San Mateo, San Carlos, eventually San Jose. The weather was nice, though, and the terrain was oh so amazingly flat and easy. Here's an example of what I got to look at all day long: 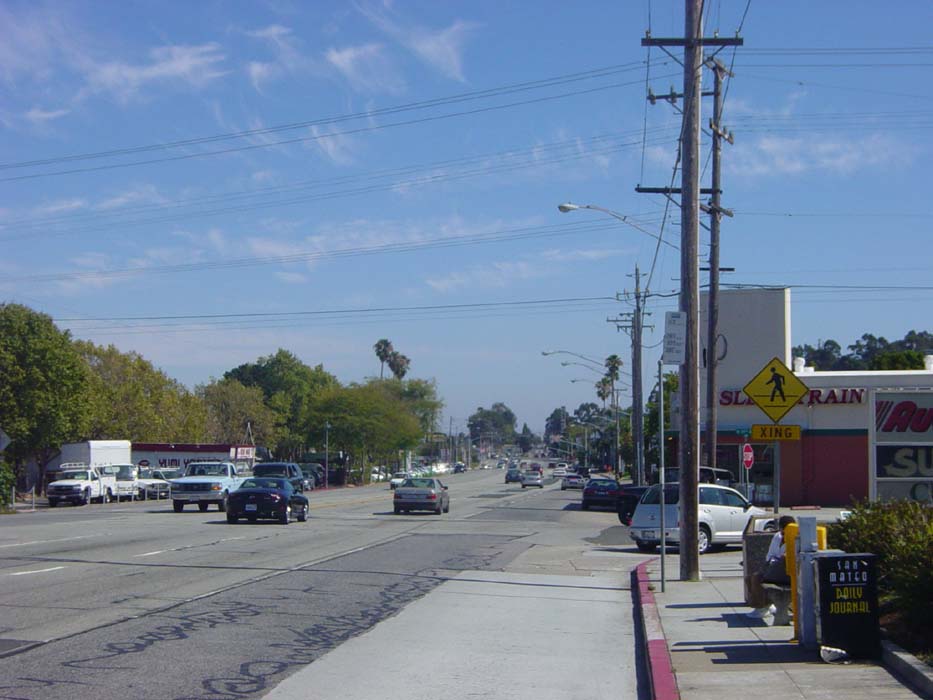 Because I do enjoy complaining, though, let me point out a couple of things. First of all, the roads were pretty bad a lot of the time. There were buses everywhere and this caused the right side of the road to become fairly beaten up. Here's an example. The right lane here is a bus stop where they've placed concrete for extra support, and it's all cracked and uneven with the rest of the pavement, creating lots of bumps and ruts. And the next lane over isn't much better. At least here they've tried to fill it in a bit, but lots of times this wasn't the case and I'd find myself dodging nasty holes and sometimes "bubbles" in the road surface. Plus, traffic didn't give me a lot of room. I think it was actually more dangerous riding on this city street than it was on a lot of the narrow, twisting roads along the coast, because there people pay more attention to you and there are fewer distractions like lights and other vehicles. 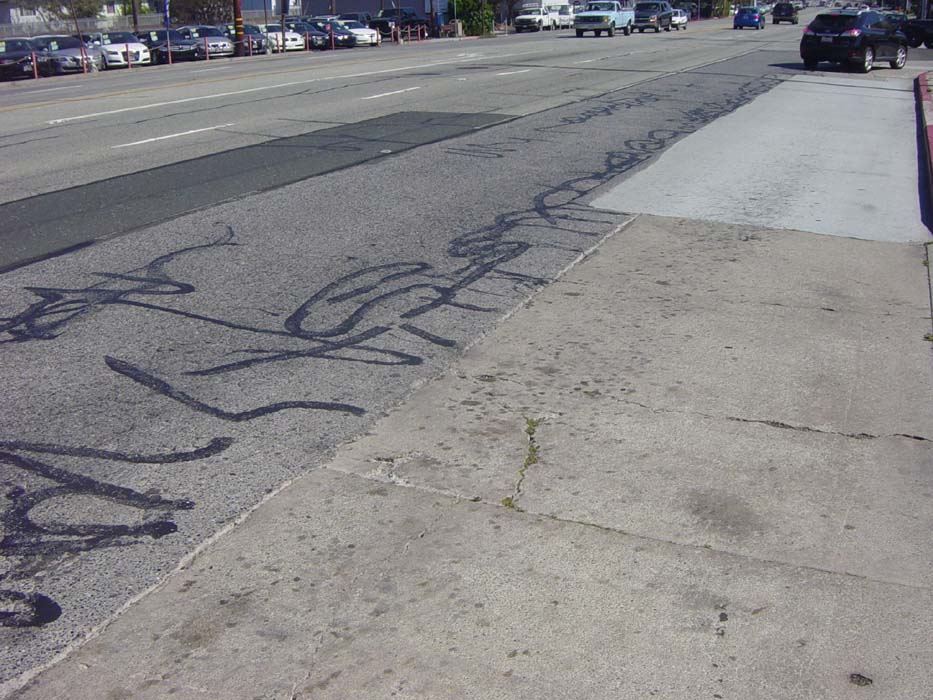 The other thing that bugged me all day were the constant lights. Here's a picture that unfortunately was taken in low-res mode for some reason even though I'm pretty sure I checked the setting first (sometimes the camera doesn't switch modes properly). This was taken about 20 miles after the last photo and you can see the terrain is still level, the road still has no shoulder and there's still loads of traffic. But the point I'm trying to make is I'm sitting at a light, and I did plenty more of that all day. In fact, I'm pretty sure I waited at more traffic lights today than I did the entire rest of this trip combined. (Keep in mind most of my riding days thus far have been on remote roads or freeways. For example, when I left Port Angeles and rode west to Forks, down the coast, then back around and south again, I didn't see a single streetlight until Aberdeen, several days later.) 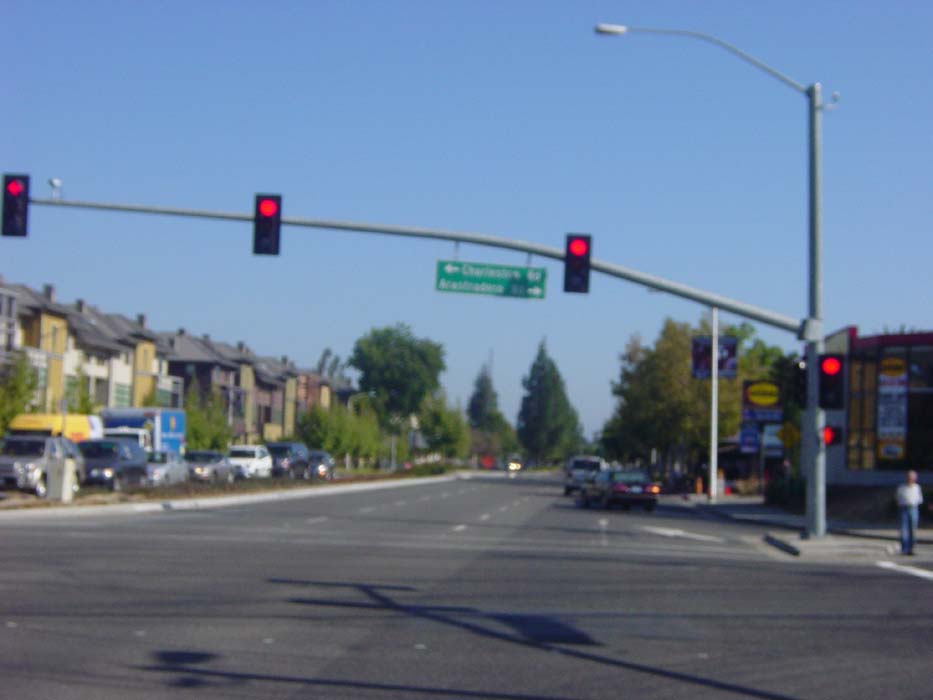 Here's one more bad low-res picture from closer to the end of the day, in Palo Alto, waiting for yet another light. I'm quite sure I lost at least an hour of riding time today waiting at lights. Combined with the extra time getting into San Francisco, the day was getting late as I rode into San Jose. But I still had aims of reaching the next town, Morgan Hill. 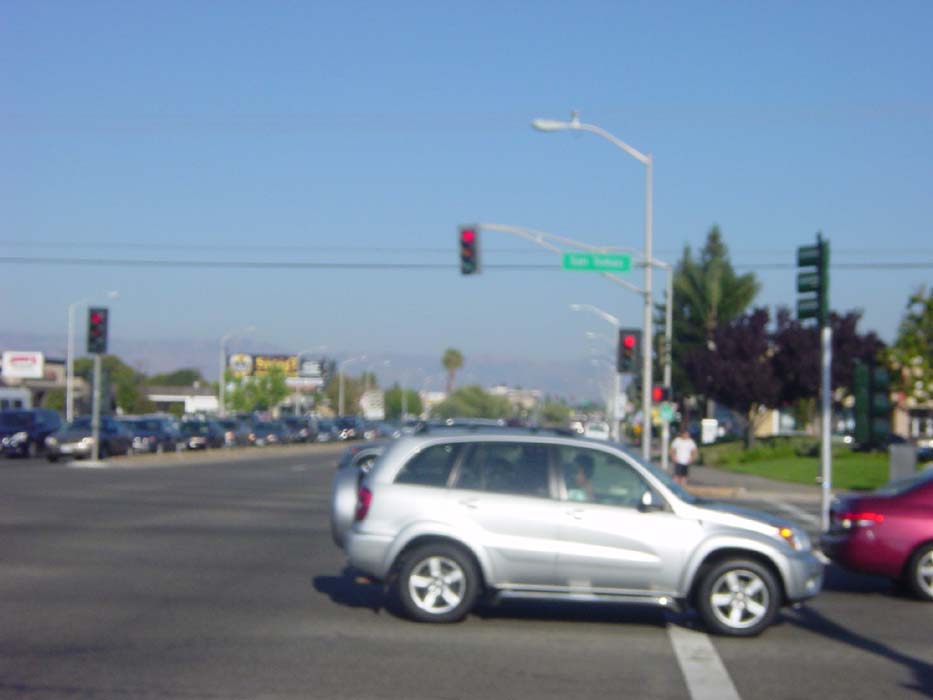 Such was not to be, however. I'd been following Route 82 most of the day, which had been relatively well marked up until then. However, upon reaching downtown San Jose, it basically disappeared. There was one cryptic "Route 82, Right Lane" sign suggesting it turned right, which I knew it had to do at some point, but no indication where. Several blocks later I saw Route 101 up ahead and knew I'd gone too far since 82 parallels that highway (I should also mention that 101 is still restricted access so I can't ride my bike on it, unfortunately, as that would've saved me a lot of waiting at lights). After turning around, I came to what I thought had to be the 82 turn, but still no indication of any sort. I turned, went a mile or two, saw no signs at all saying I was on 82, and figured I had to be wrong after all. Well, after some riding around I eventually got directions and found out I'd been in the right place after all, so I went back there. Note to San Jose: Come on guys, if you're going to have a numbered route going through your city, at least tell drivers and riders where you turn if you want to stay on it. Thanks.

Anyway, this debacle cost me even more time and now the sun was getting low, so I abandoned the original plan (which would've made today about an 80 mile ride) and found a cheap hotel close by. Tomorrow should feature the return of the hills as I make my way back to the coast.