When I got up today and looked over my route, I had in mind to get to Oxnard and make it a short trip, seeing as yesterday's final climb was so taxing. I did some research on hotels in the area and then took a look out towards Malibu, but everything there was too expensive. I knew Santa Monica was 95 miles away but I really didn't think I'd ever get that far so I didn't bother researching anything further on that. Instead, I focused on the initial stages of the ride, i.e., getting out of Santa Barbara and on to Ventura and Oxnard, which were going to require a lot of turns and route adjustments.

The morning was relatively nice where I was, already getting warm and the sun shining overhead as it has most days of late. Of course, as soon as I got down to the beach, there was the fog again. I took this picture of the pier at Santa Barbara, which was actually pretty cool, but you can't see much of it. 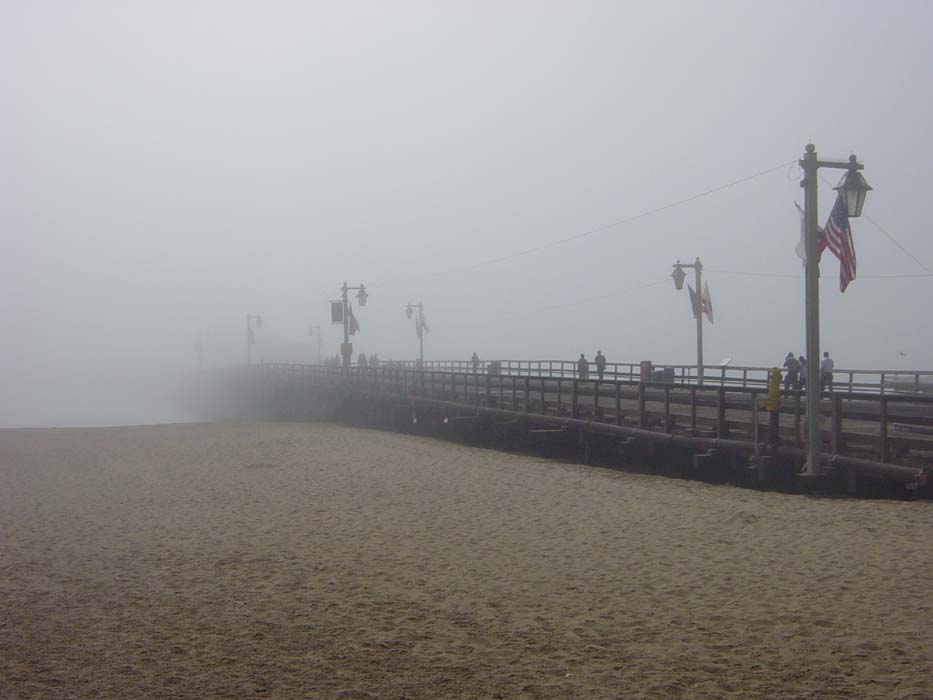 Here's another shot looking back at the beachfront area as I leave it, so you can see how the fog just doesn't quite make it more than a couple hunded feet inland. That was all the more it bothered me all day, just occasionally crossing my path as I got nearer to the water. (I could actually use it as a landmark to tell how close to the beach I was.) 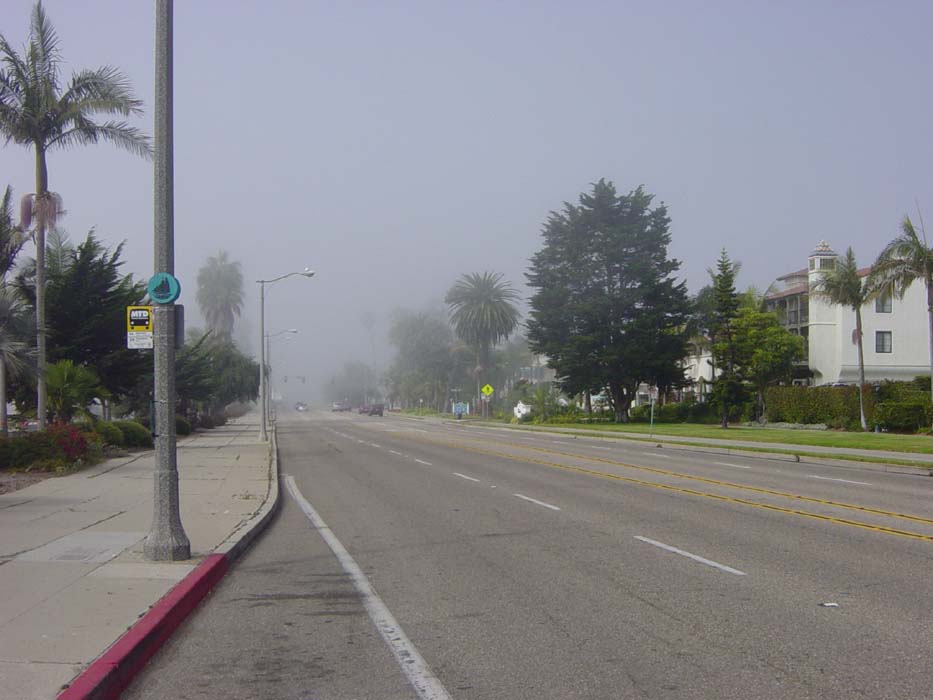 As soon as I reached the point on my route directions where I was supposed to merge onto US-101, there was THE SIGN again. I figured that would probably happen (I can be taught) so I had some alternatives plotted out. Unfortunately, because of a missing road name, I went a bit too far at one point and had to work my way around, until finally I stumbled on this nice bike path following the left side of 101. How convenent, there's even a fence. 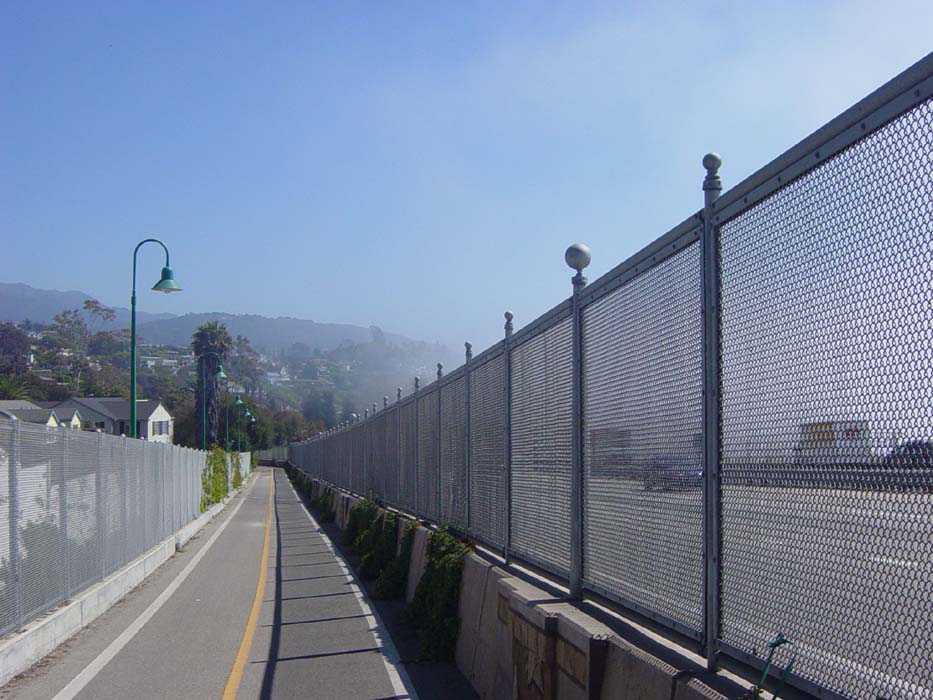 Further on, the path disappeared and so I tried to get onto 101 again, only to be confronted with THE SIGN once more. (It's just ahead and to the right of that blue car there.) 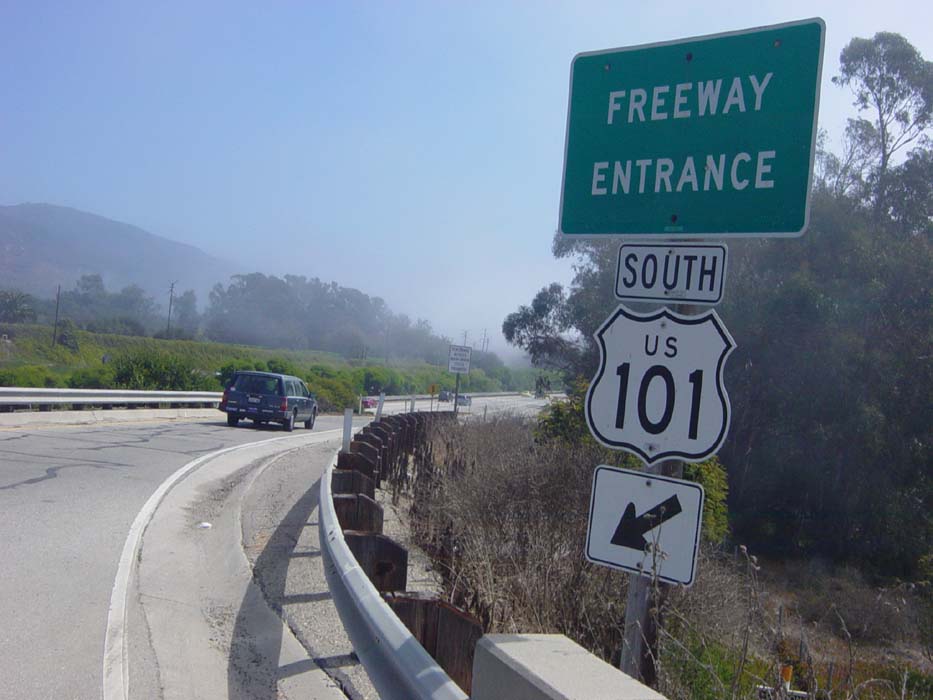 Fortunately, there was a road parallelling 101 here so I got on that, hoping only to try the next entrance ramp, but then I noticed a bike route sign labeling that street part of the "Coastal Route." So I started following Coastal Route signs and they pretty much hugged 101 for about another 10 miles. The road was pretty flat here, but to my left there was a nice line of mountains which blocked my only other alternate route (up throught the Thousand Oaks area). So I was quite happy to find this bike route as otherwise I'd have had to get on 101 despite THE SIGN. 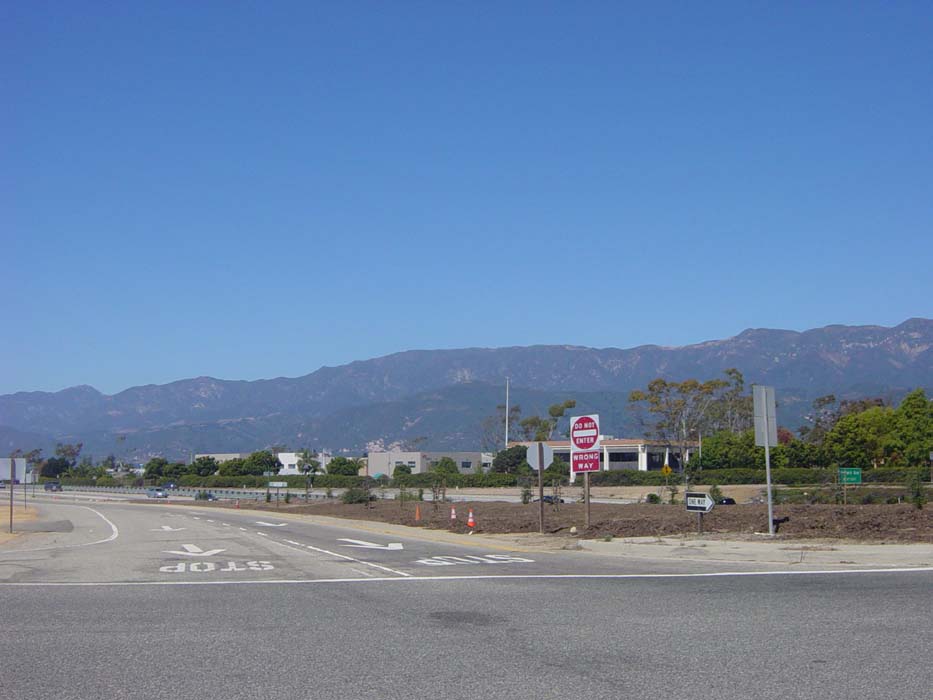 After getting some lunch at a Carl's Jr. (the west coast version of Hardees) I continued on until I reached the end of the Coastal Route. There was no more parallel road, so I tried 101 once again, and hey what do you know, there was no SIGN this time. Just a pair of "Emergency Parking Only" warnings (I guess they really wanted you to know that because there are two signs back to back that say the same thing). 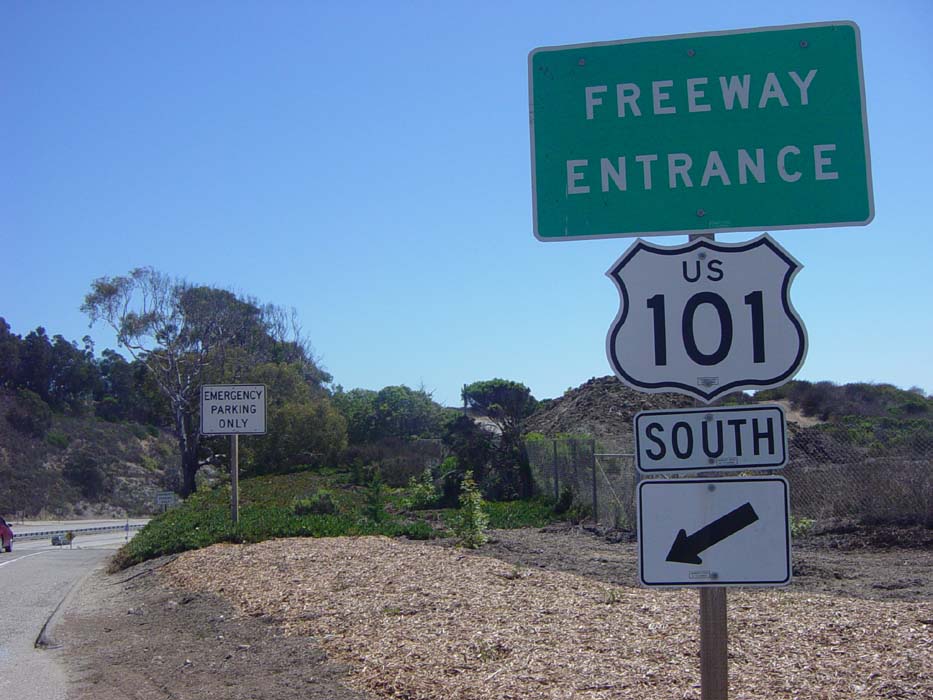 Here's a nice view a bit further down the freeway. The fog is almost gone now and you can see a nice bit of coastline there. 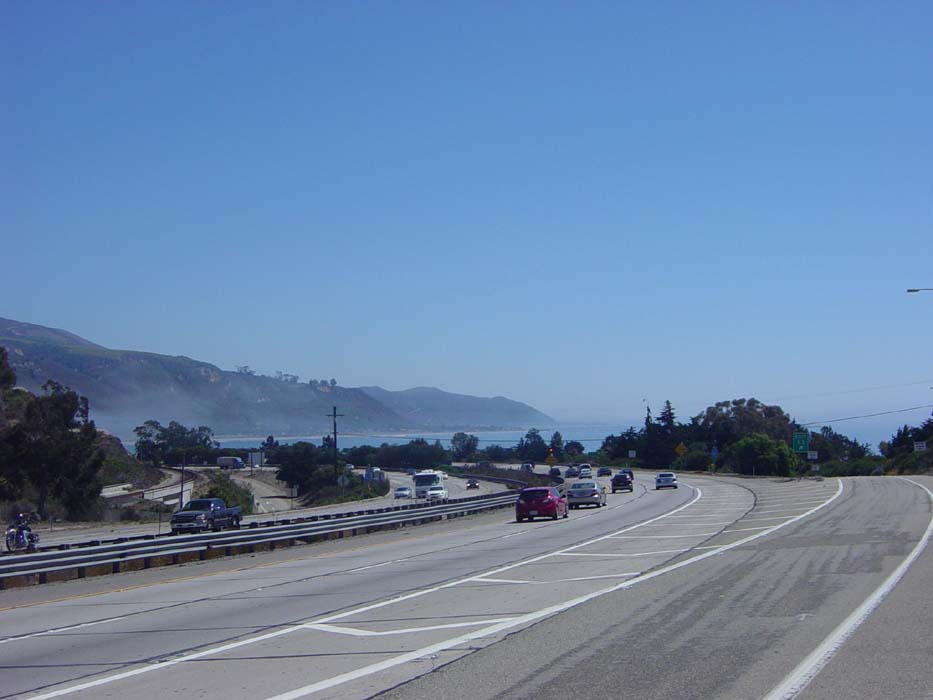 I got a surprise a bit farther on as this stretch of freeway suddenly sprouted a bike lane, and a parking lane to the right of that. Don't believe me? Here's proof. There were cars parked here and there (none in this picture) so people could take a stroll on the adjacent beach. 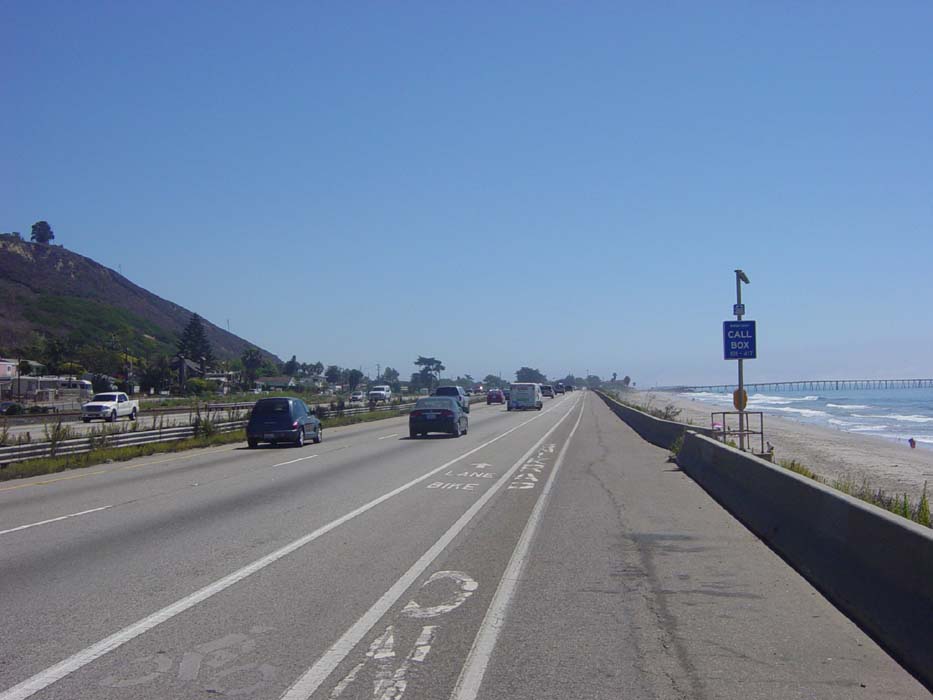 So 101 goes from not wanting me on it at all, to giving me a bike lane to ride in. Someone needs to make up their mind on this stuff. Anyway, to the right of the previous picture, there was this island sitting there with a bridge running out to it. I didn't investigate this further but it struck me as rather odd. 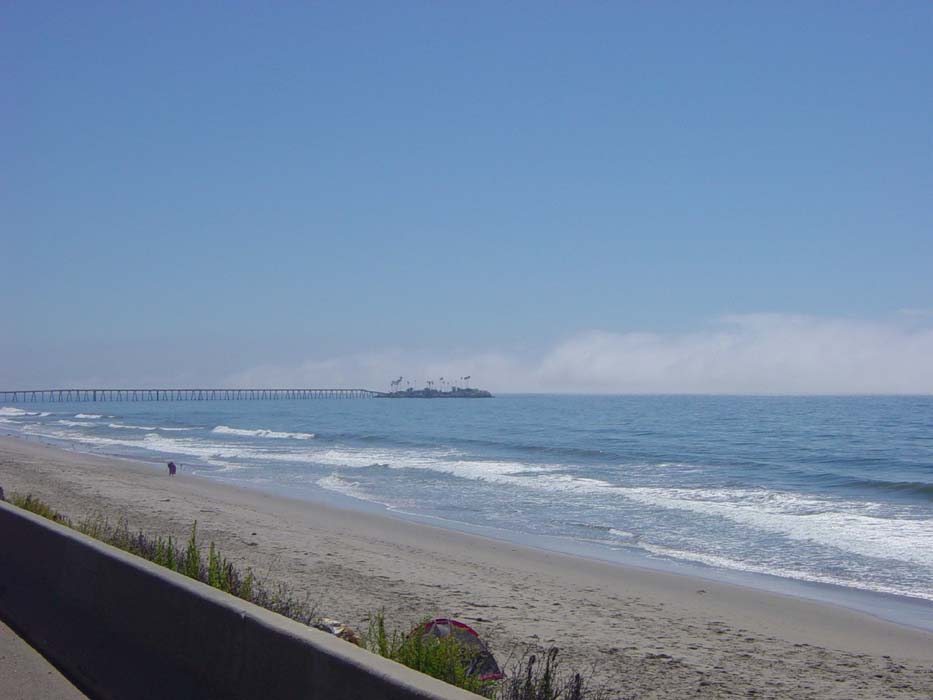 The beach ride continued for a while and was very pleasant. By now the wind was coming from behind me, mostly, and the terrain (despite the mountains there) was flat all the way along. I'd already gone about 25 miles at this point and it was still really early in the day, so I started to entertain thoughts of maybe trying for Santa Monica. I told myself if I got to Oxnard (about the halfway point) and thought there was enough time left, I'd go for it. 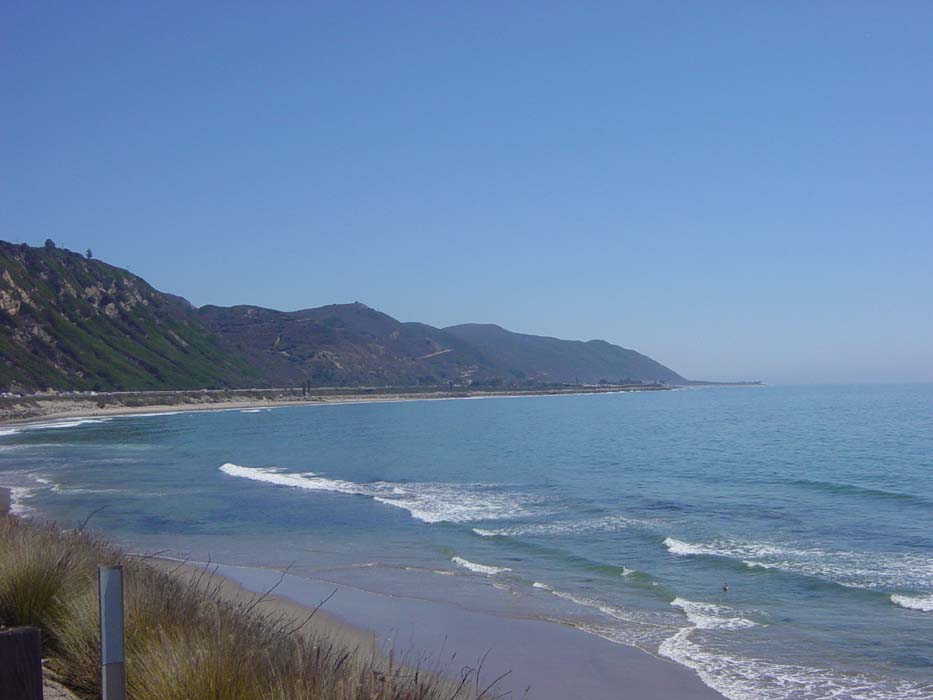 A bit later on THE SIGN reared its ugly head again and I was forced to exit.  I knew this was coming, though, and had a route planned to get through Ventura and Oxnard and on to Route 1 on the southeast side of town. 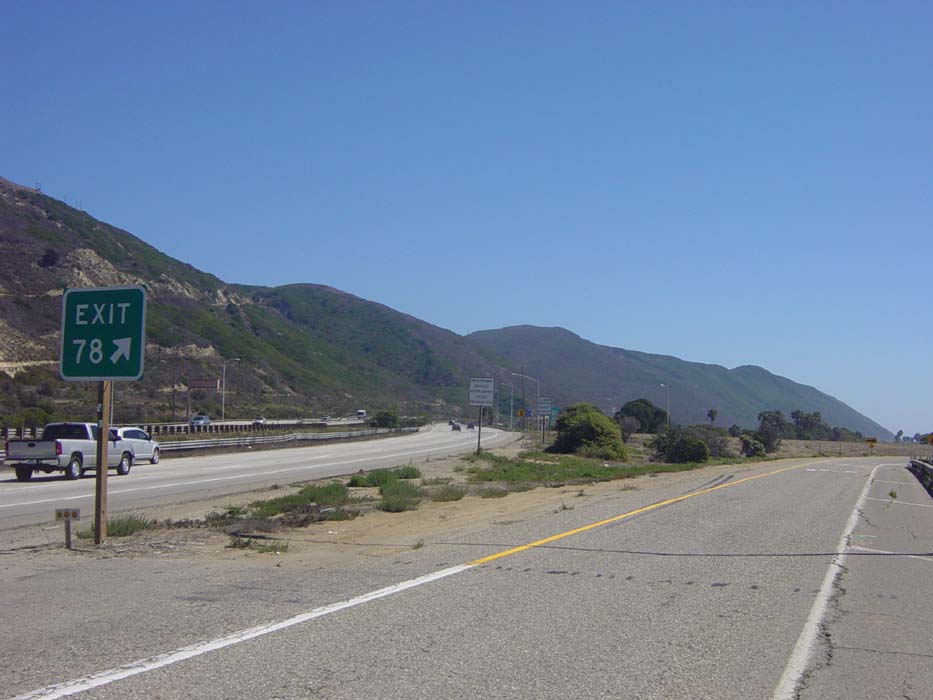 One last look back at the coastline I just passed, though. 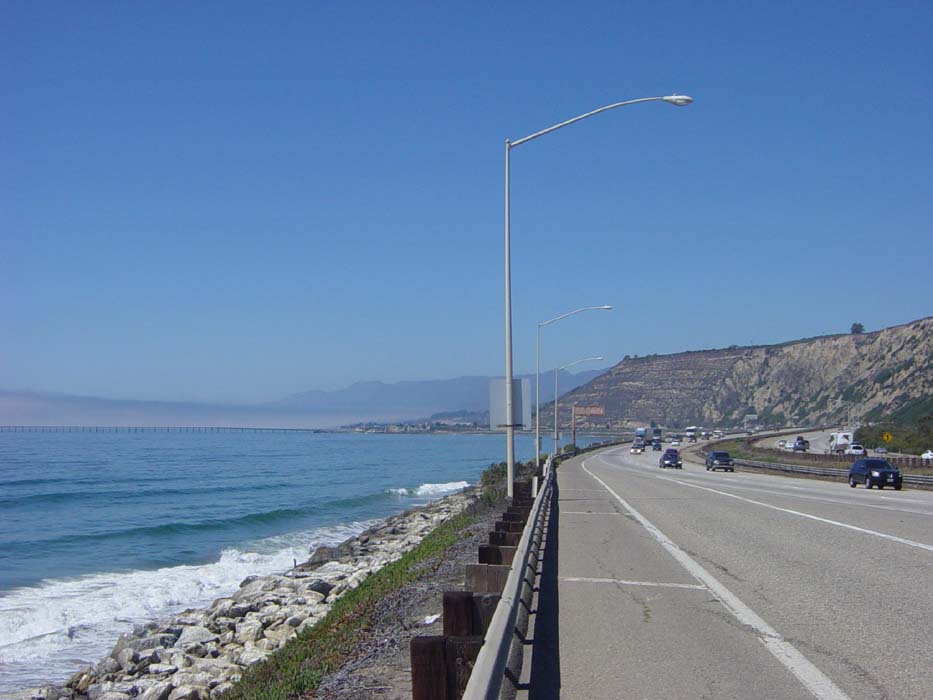 Ventura surprised me with a nice bike path that ran along the coast for quite a while, enabling me to avoid the surface streets my route originally included. Here's a pic of the rather crowded path as it passed through a state park. I'm literally riding alongside white sand beaches at this point. 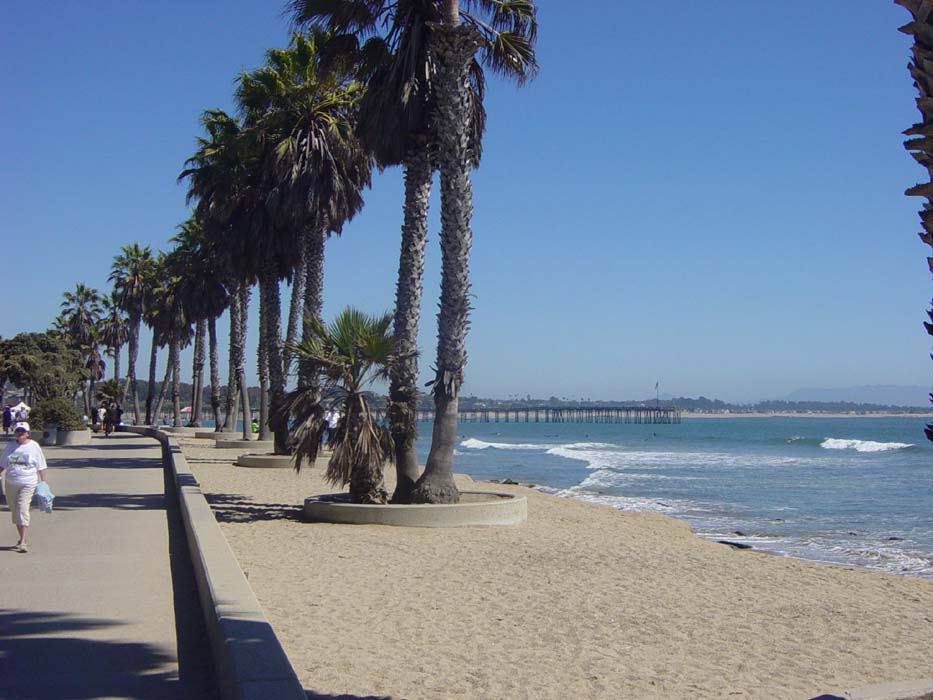 Once the path ended and I got back on the roads, there wasn't much to see. The route took me out of Ventura and into some industrial type areas before running by a Navy base, and then out into some farmland. I clicked this shot while riding, showing the edge of the next set of mountains I'll be going past. Route 1 goes right around that corner, where the hills meet the water. 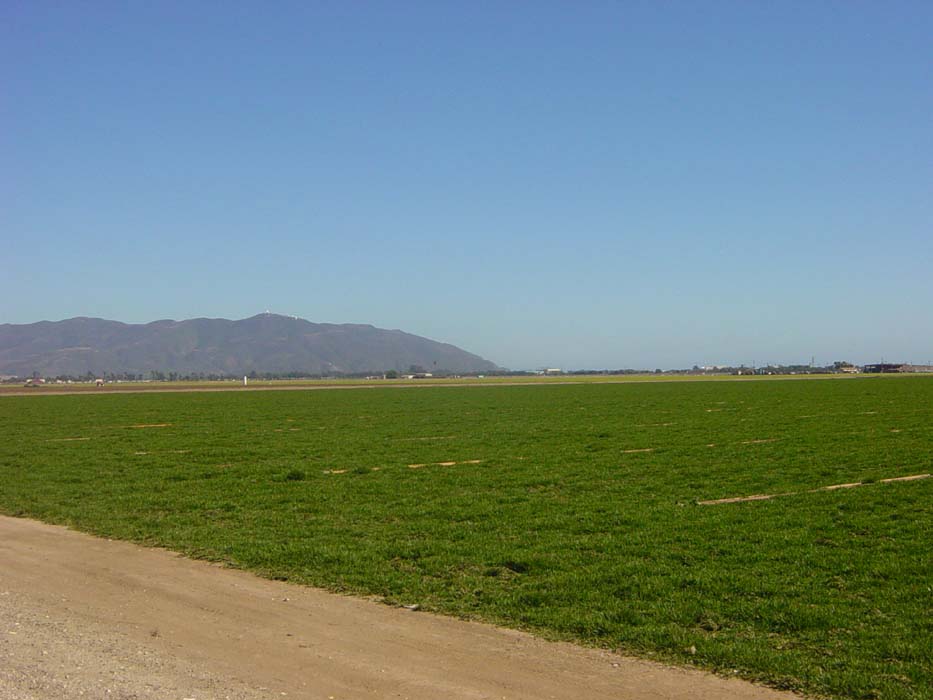 In fact, here's what I'm talking about right here. At this point my decision was made, and I was committed to getting to Santa Monica. It was about 3pm and I had almost 50 miles to go, with the sun setting around 7:15. I would have to hurry, unless I was willing to stop in Malibu and pay $150+ for a hotel room. There was also a campsite along the way, but I expected it to be full and was correct. 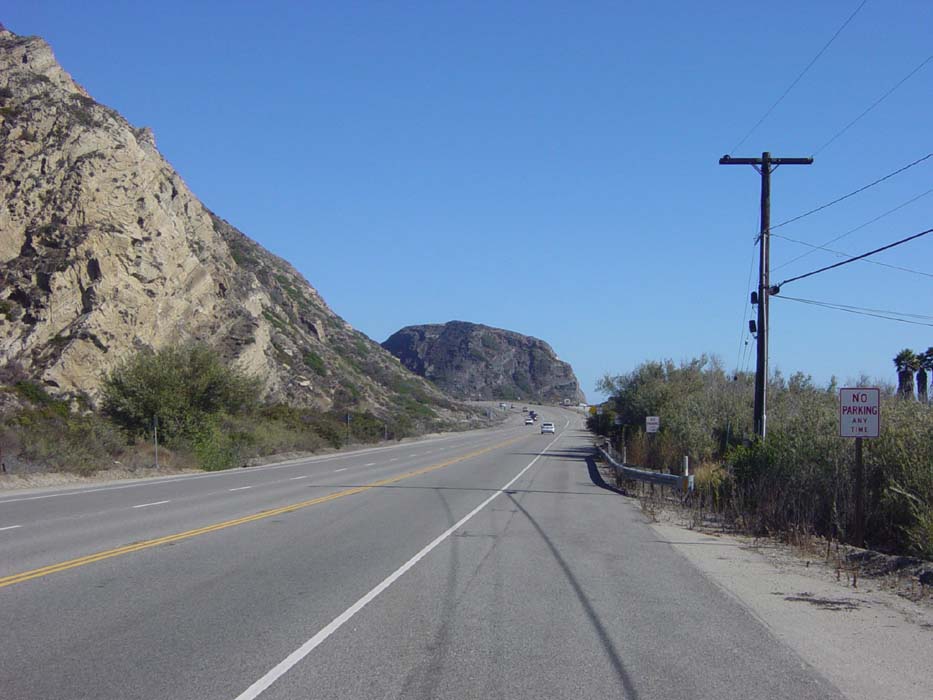 Another view of the coast heading to Malibu. The road is relatively flat, despite the hills you can see here, a marked contrast to the sections of road I had to deal with earlier in this trip. Usually, seeing a mountain like that meant nasty climbing ahead. This time, the road just passed around it at just above sea level. 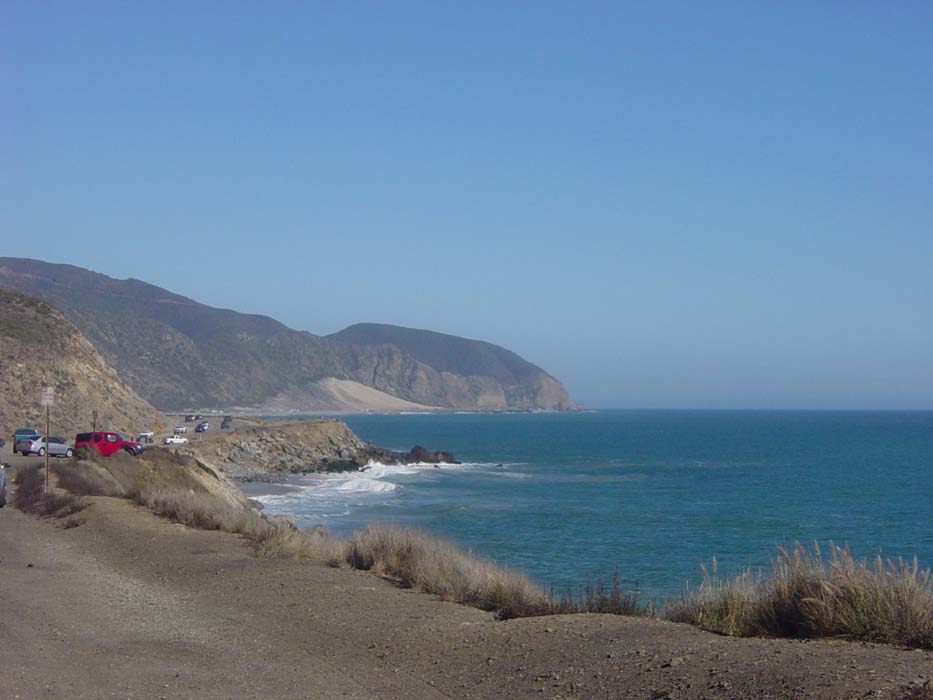 This is the view from around that point up in the previous shot. Notice there are buildings at the end of the next penninsula. This is the fringe of Malibu, which it turns out stretches like 27 miles along the coast. 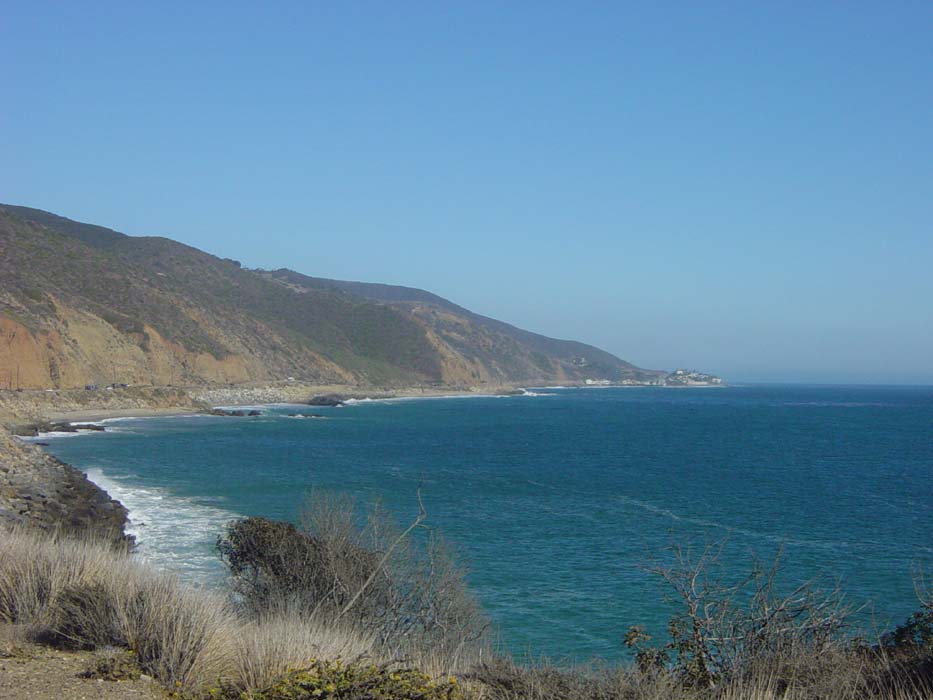 At this point I began to encounter a few low hills, but nothing serious. There were numerous beaches and lots of people, but very few buildings. Here's a view looking at what some of those people were up to: surfing with kites. Looks like fun, but I think I'd get my arms ripped off if I tried it. 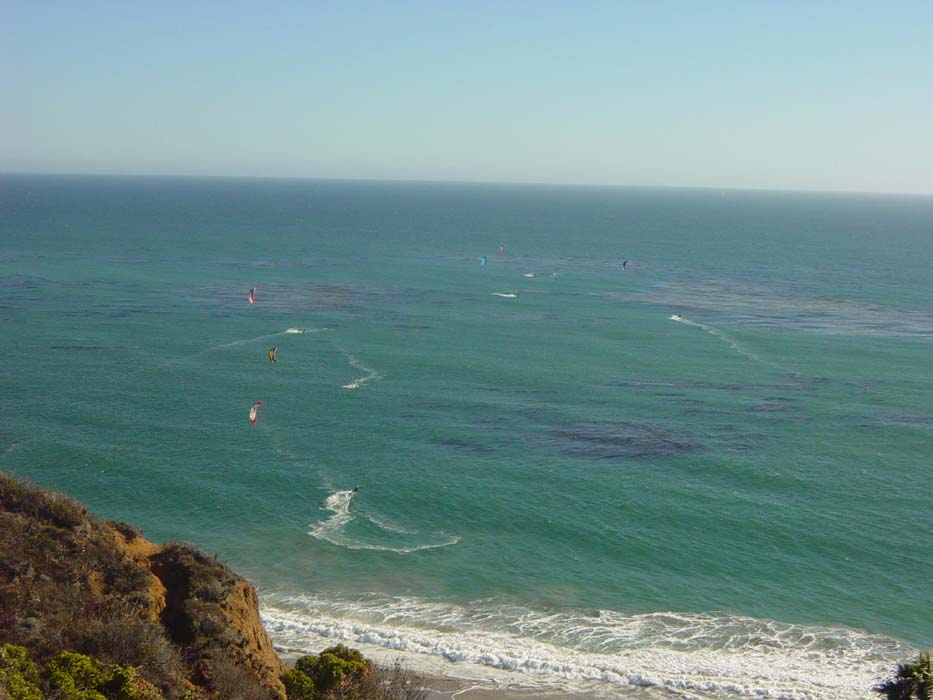 Eventually I reached a place where the houses started to pile up around the beach. Here's a first look at that: 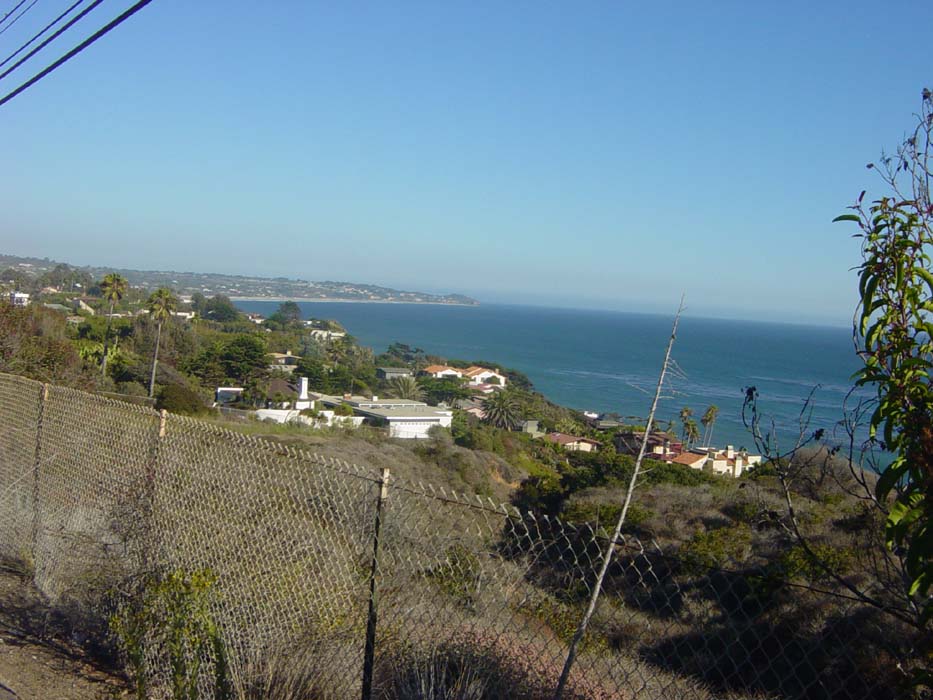 A much better view further on. 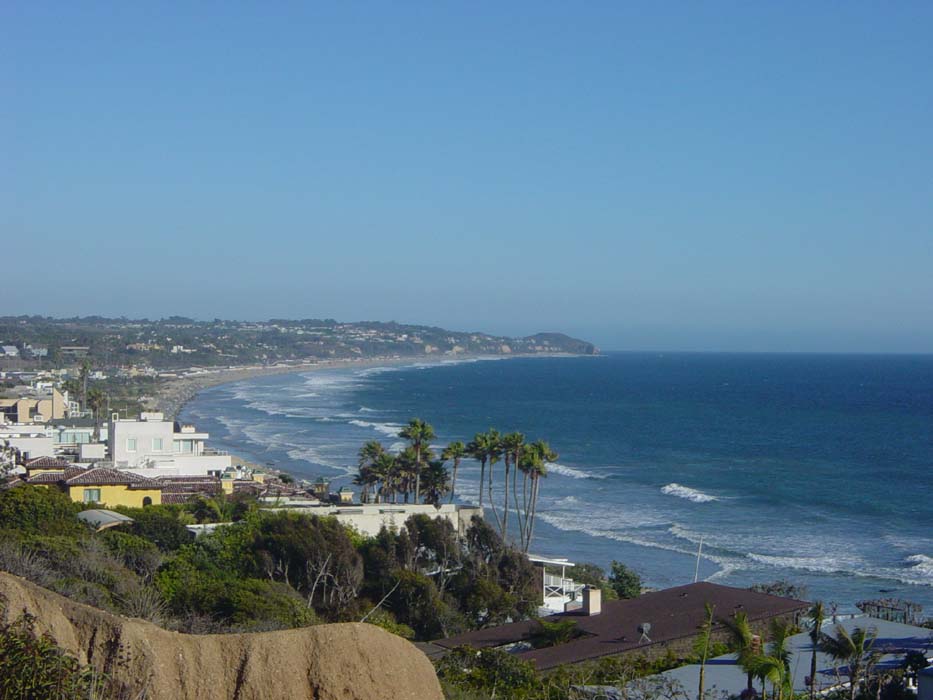 And another look at a section of Malibu. Note the hill there, which I had to climb shortly after this picture was taken. There were several more fairly steep hills (none more than half a mile long) but nothing terribly serious, but I was worrying because they were slowing me down considerably, and time was of the essence. 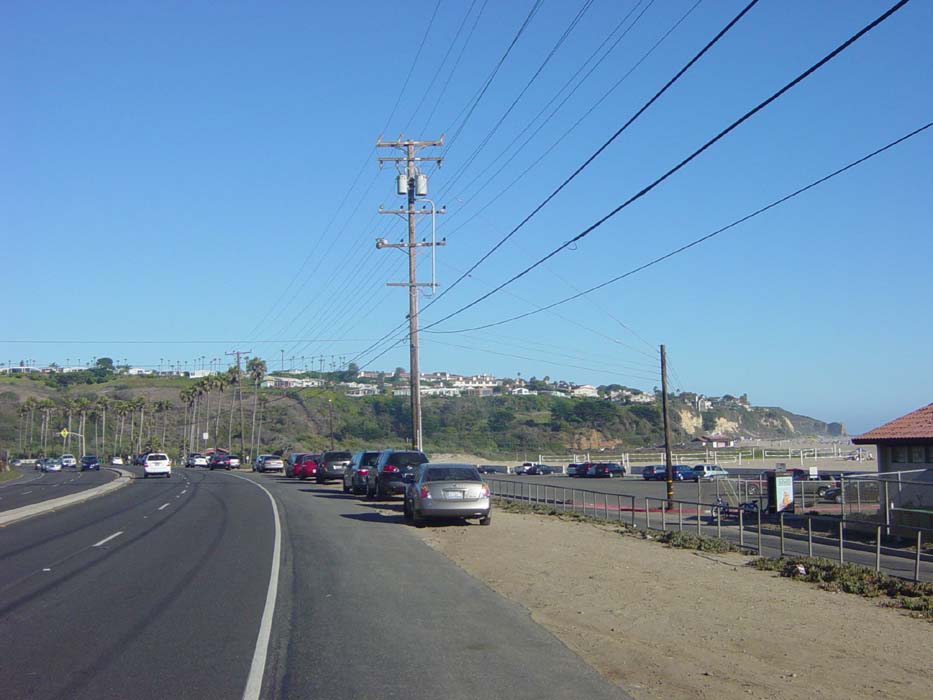 Finally I got tired enough on one of the climbs to take a break, my first one in over 30 miles. There was a park here and I refilled my water, then took a snapshot of what I now realized was Pepperdine University. As you can see, it's also a flag farm. I always wondered where flags are cultivated, and it turns out it's right here in Malibu. This particular crop was just about ready for harvesting. 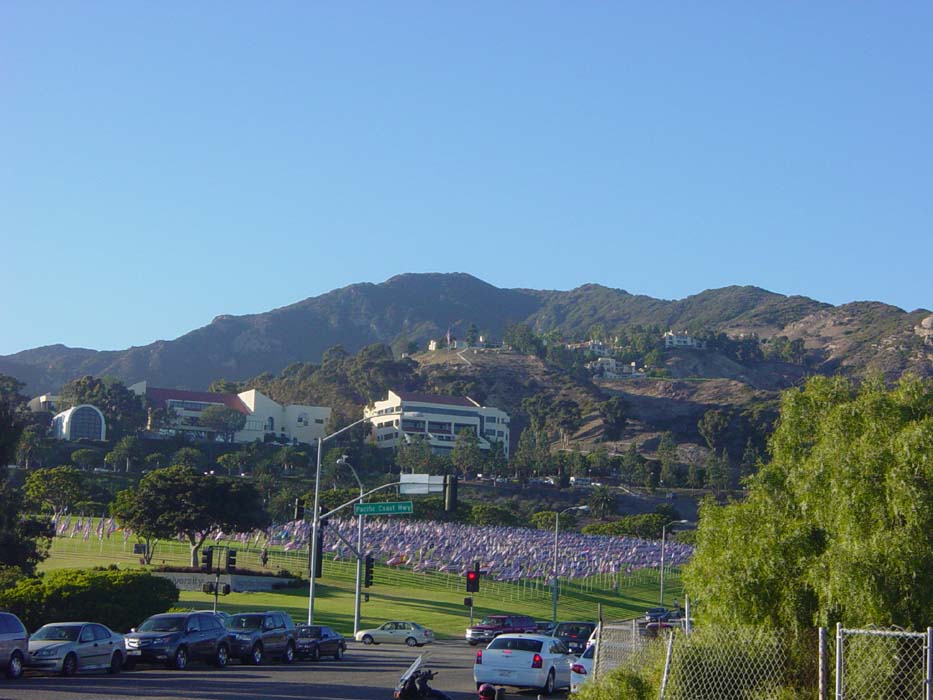 I'm so witty. Anyway, moving along, I topped a couple more hills before finally getting my first look at my destination for the day. See those tall buildings on the far right? That's Santa Monica. 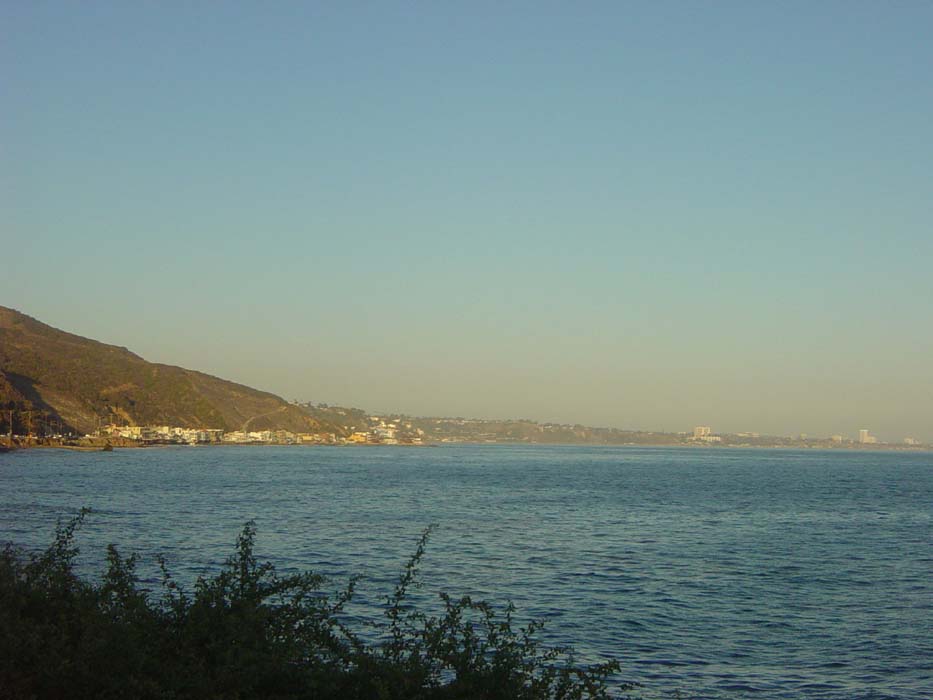 As dusk was falling, I finally made it. Here's the famous Santa Monica Pier. 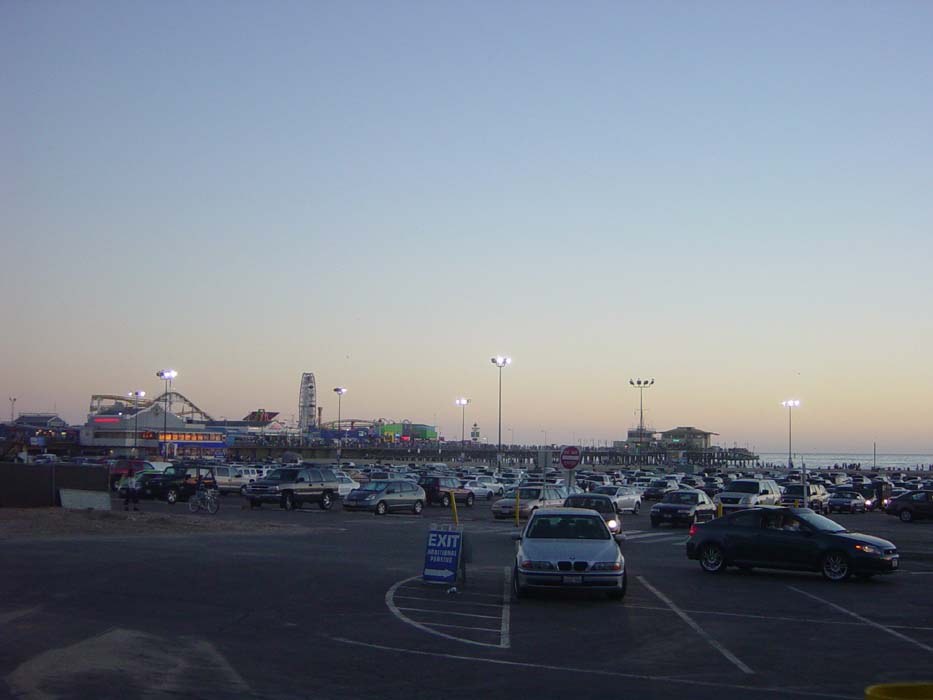 Shortly after taking this I began a cris-crossing of the town itself looking for reasonable hotels that weren't full. It was completely dark when I finally chanced upon the Gold Star hotel a few miles further down than I'd originally intended to go. It was only $80 (they only took cash) which was $45 less than the next cheapest place I found. I can't wait to get out of this expensive section of California and back to where prices are reasonable again.