The weather report for today suggested rain, so we packed jackets and prepared for the worst, but fortunately all we got all day was a few light sprinkles. The wind, when it was there at all, stayed at our back, which made the gradual climbing easier. It didn't do anything for the really steep climbs, but fortunately there were only a couple of those and most were short.

We began the day heading to Ubersee where the instructions said to pick up the starting point for the day's tour. Remember, we weren't staying in Ubersee like the route suggested, because the hotels there were all full, forcing us to stay 10km to the west. So instead of having nice detailed instructions and little "E" symbols pointing the way, all we had was something like "Ride to Ubersee, go to the center of town and look around for the starting spot." With all that to go on, we basically headed off the direction we'd gone yesterday, but instead of turning north towards the lake, we kept going east. This route took us alongside a train track and then up a fairly tough climb on a crushed gravel path (most of our riding today was on gravel, again). Here's a look back at one of the climbs after we finished...notice how the road just disappears downhill). 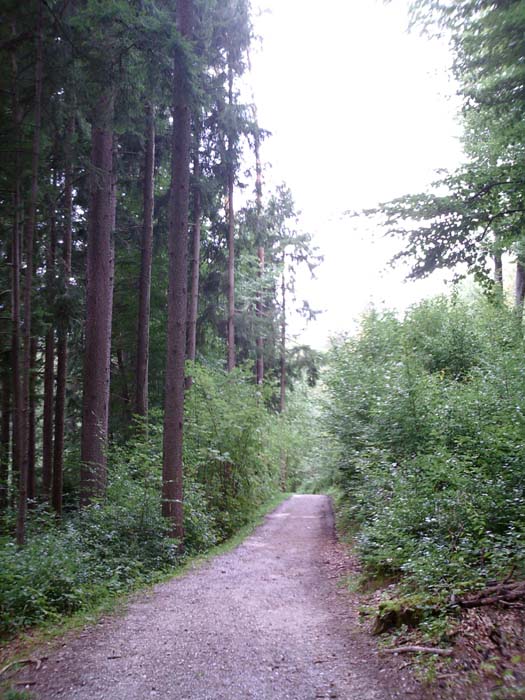 At least the view from up top was pretty nice: 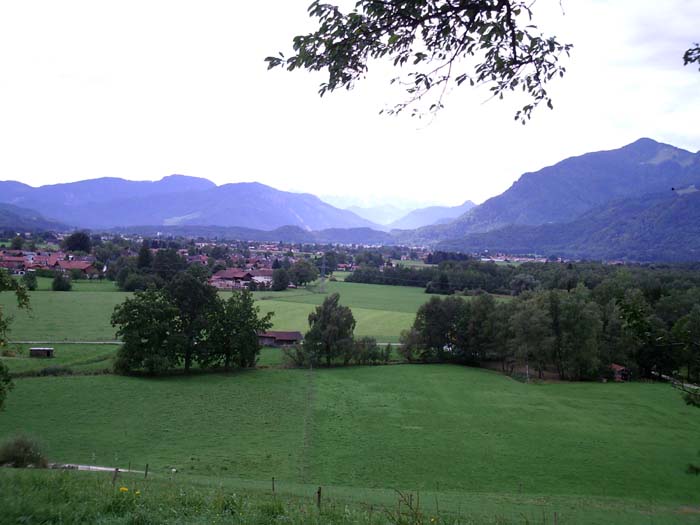 After this we descended and tried to link up with the route heading out of Ubersee, but when this proved impossible (it's hard to get around on winding, unknown roads without a really detailed map that has street names on it) we just stumbled around until we came upon a recognizable landmark (a train station) that got us on the right track. (I hadn't intended to put a pun there, but one just crept in anyway.) This led us to a nice scenic little river crossing...here is the view to our right as we're about to cross over. 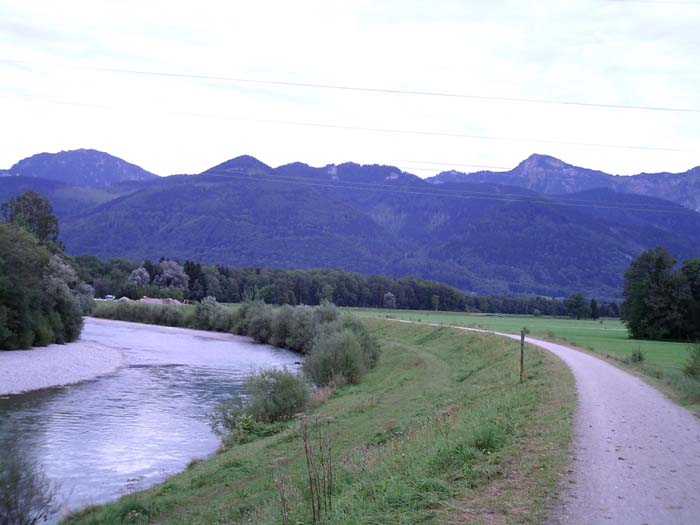 The bridge itself was pretty narrow, as you can see below. Notice the signpost there. The red circle around the horse doesn't mean "Horses welcome," it means "No horses allowed." It took us a while to figure out that a red circle like that was a restriction, not an invitation. Also, the green signs below that are bike route indicators (as you can see from the picture above, we were crossing over a bike path). Oh, and that tiny white circle below that with the red in it...well, more on that later. 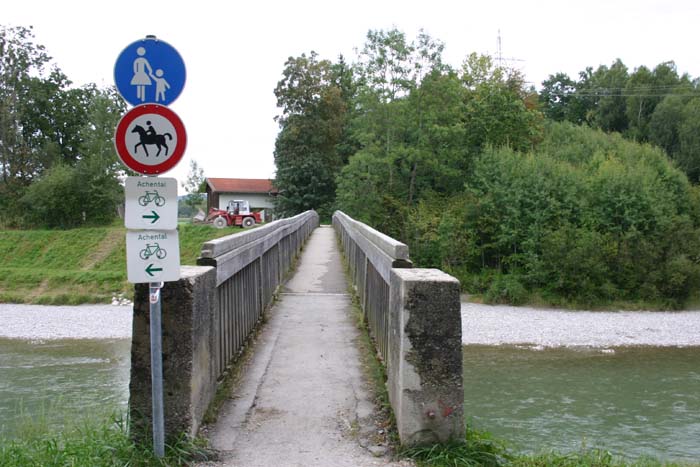 The route we were on didn't cut left after the bridge, as you might be thinking, but instead went right into those trees, and up into some hills. The path at that point was so steep, narrow, and covered in slippery gravel that we were forced to walk. Here's a view from the top, which gives little idea of how steep it really was, but trust me, it wasn't worth sliding and toppling over that railing. Besides, it didn't stay steep for long. 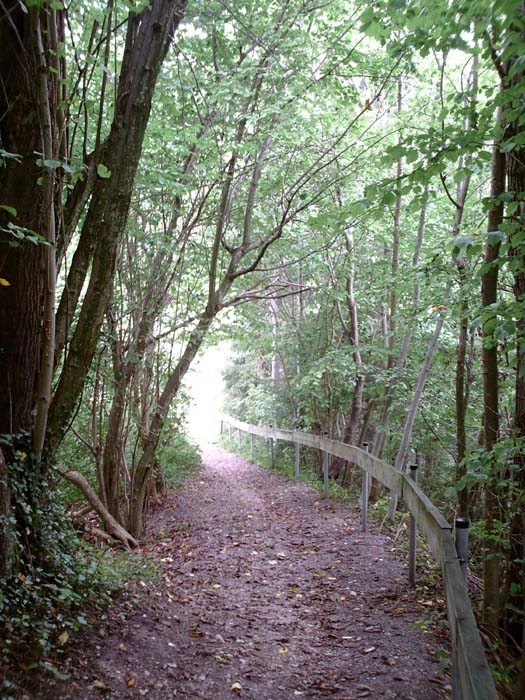 Once at the top of this we broke out into the clear and got treated to this view: 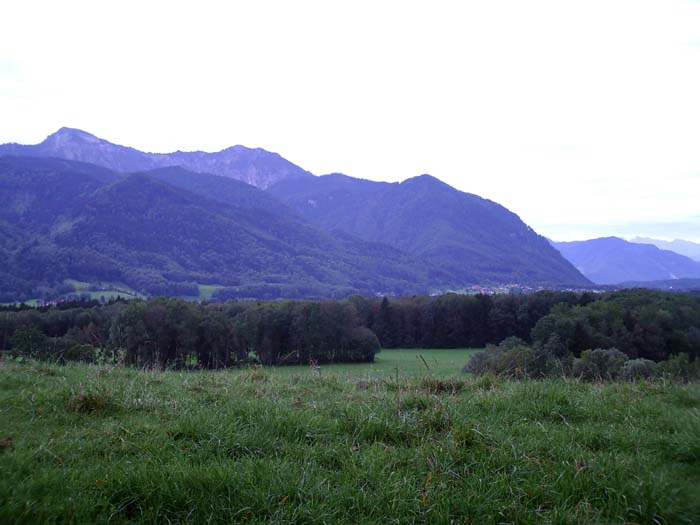 Now, back to that sign from earlier. The little white circle I was talking about there was actually one of the "E" route markers we're supposed to be following. Herre's a closer picture of it so you can see what I mean. The stickers are placed so the arrow points in the direction you're supposed to go, in this case straight across that bridge. 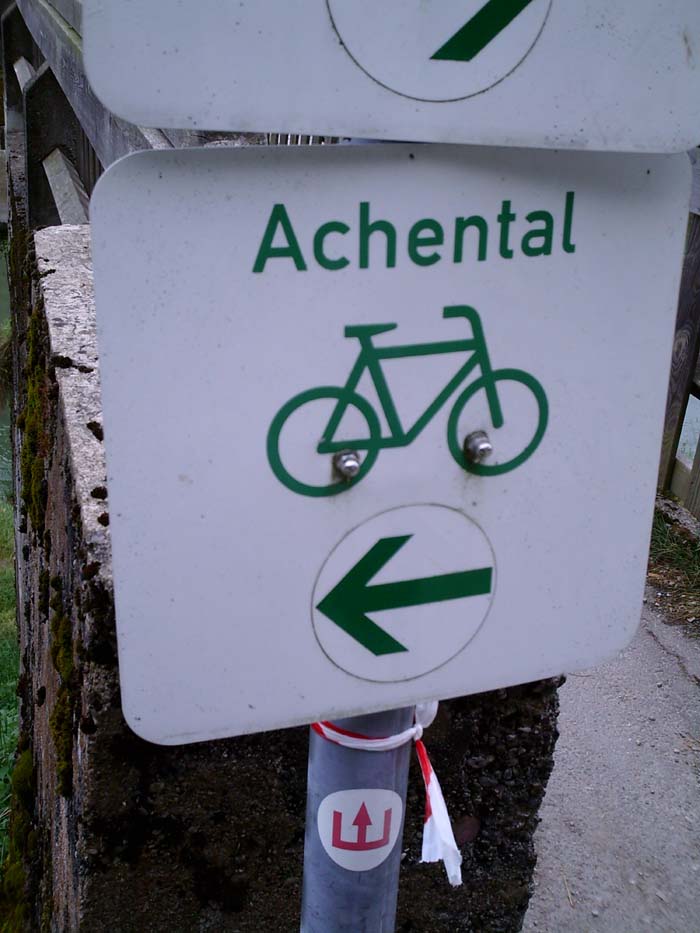 Now to show you exactly how big these things really are: 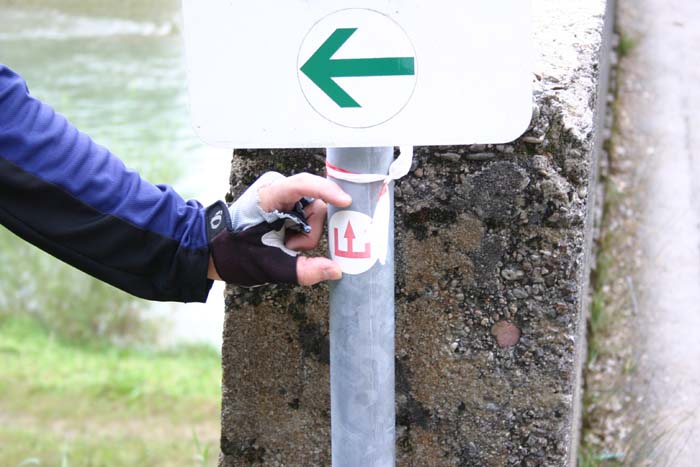 Try to imagine trying to spot something like that when you're dodging traffic, or on a steep downhill, or on a twisting section of slippery gravel. They're very easy to miss. On a nice quiet path, sure, but we had a lot of trouble finding them under the above conditions. Oh, also, then you would have situations like this one here: 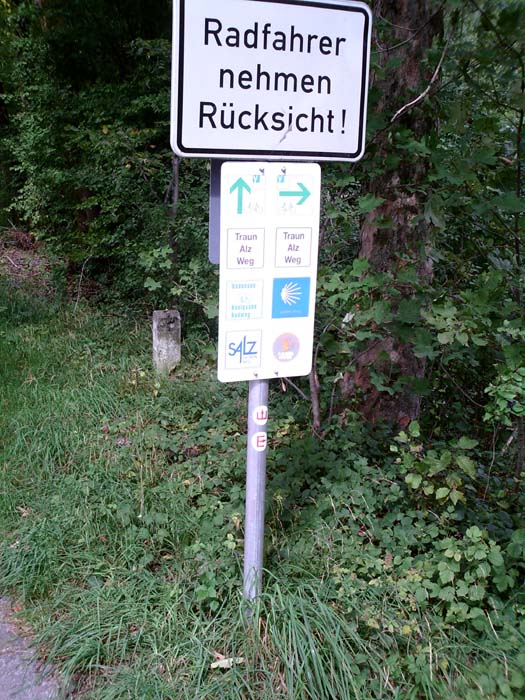 Okay, so, which way do we go, straight or right? Or does either direction work? (Nope. The correct answer in this case was right, but we could only figure that out by stopping, digging out the route guide, figuring out exactly where we were, and deducing the proper way to go. Following the printed instructions is almost impossible while moving, unless you like riding out into traffic or into ditches.)

So anyway, as I was saying, we figured out the right path to take and headed down out of the hills to reach the (paved, yay!) road from Bayern to Bergen. Here we were riding right along the edge of some mountains. This is the pitiful little hill we just came from. (The sign there notes that the area is a nature preserve and talks about some of the birds you might find in there. At least, that's what I think it was saying, seeing as I can't read German.) 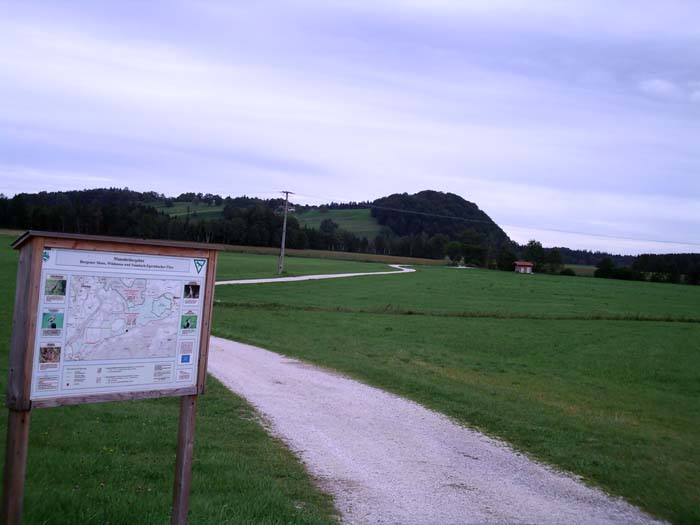 This is the hill in the other direction. Fortunately, we didn't have to climb this one. 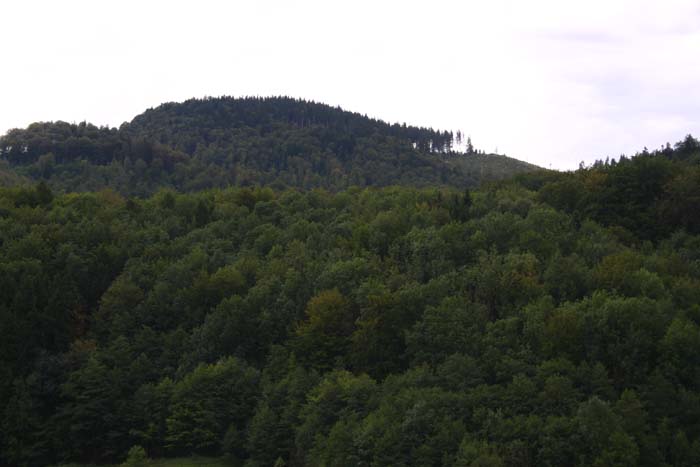 The route to Bergen gave us some nice views: 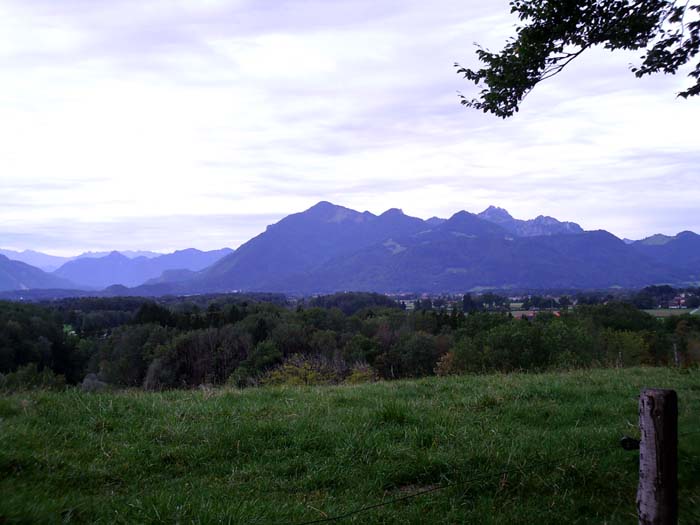 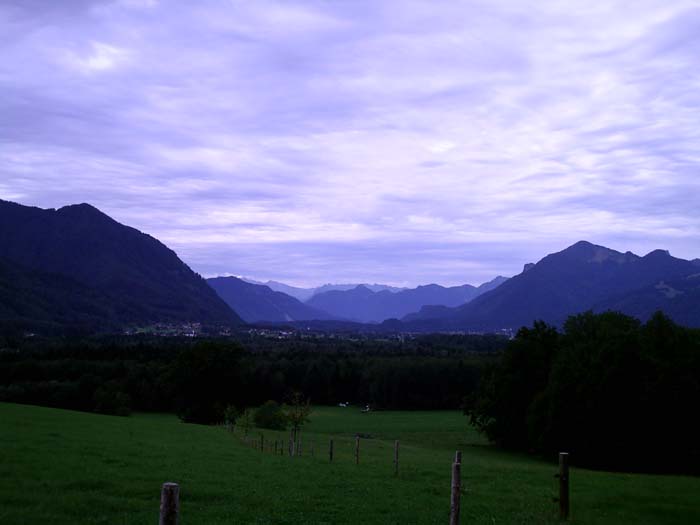 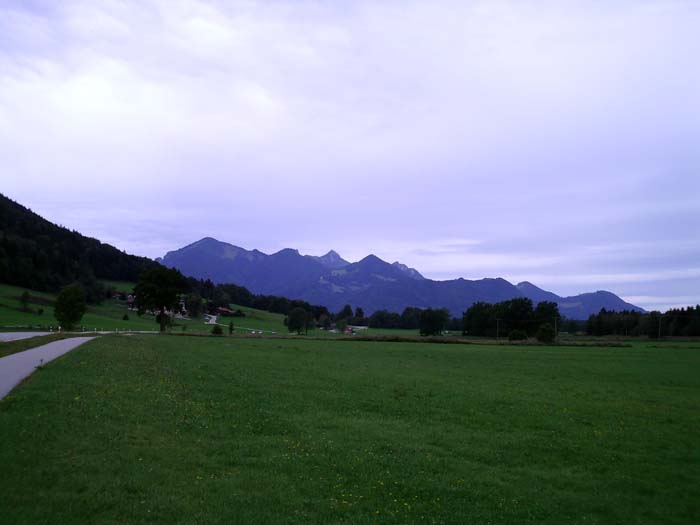 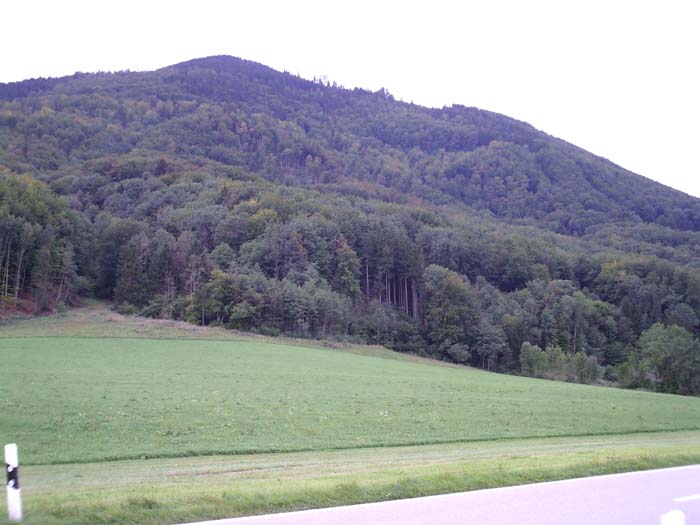 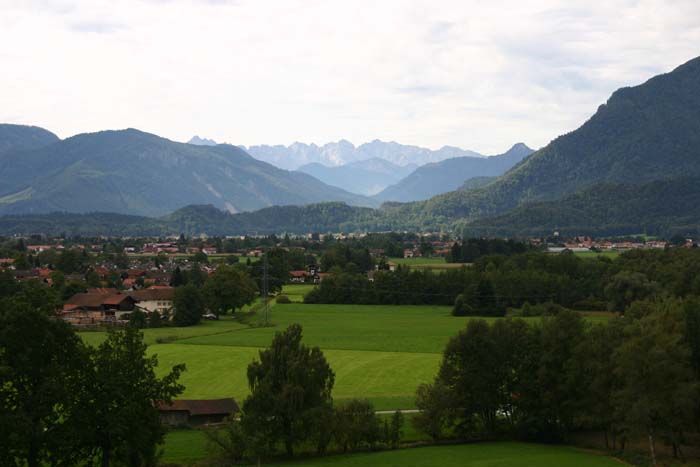 They start to all look the same after a while, but seriously, the mountains are just awe-inspiring. Unfortunatley, we didn't stay out in the open for long. Once reaching Bergen, it was back into the woods and onto more gravel on the way to Siegsdorf and ultimately to our destination, Inzell. On the way through Siegsdorf, we ran afoul of another impossible-to-spot "E" marker and wound up going a couple kilometers out of our way (and uphill) before backtracking and finding the tiny turn we missed after leaving a busy traffic circle on a narrow, crowded street (how did we ever miss it??). They really need to make "E" stickers with big "X"s across them to warn people they've missed a turn and are now going the wrong way. Remind me to put that in the tour evaluation!

Anyway, here's a few pictures of the forest terrain we were passing through. The last one is as we're emerging from the woods and are heading back out onto roads just before reaching Inzell. 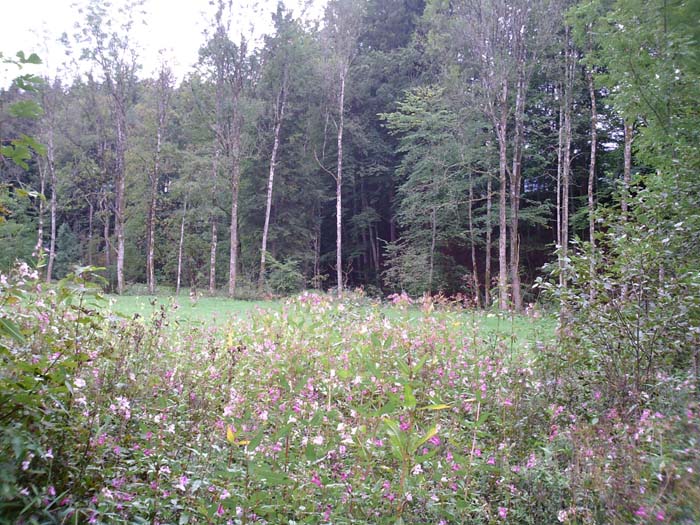 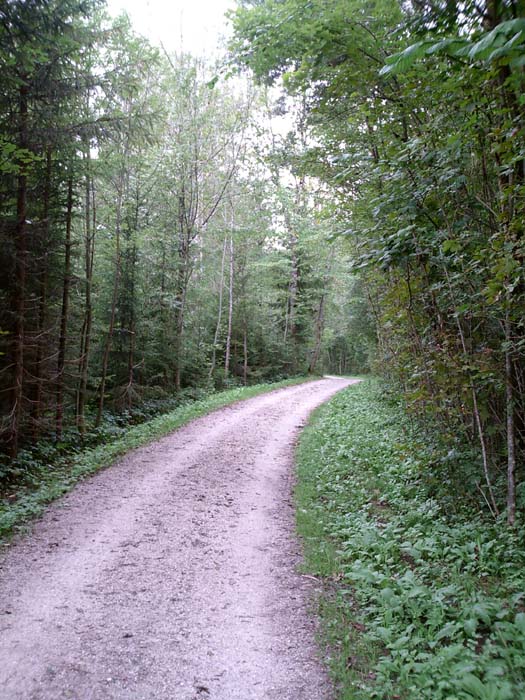 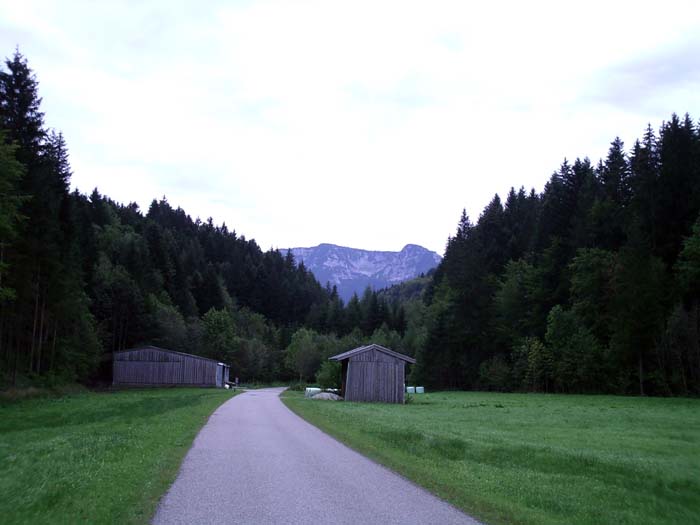 The mountains in the background are pretty impressive. It turns out Inzell is an alpine resort town, nestled in a notch at the bottom of a couple of these peaks. Here's a nice view of the surroundings just before we got into town (just after passing through the gap in the trees above). Cows and farms were a pretty common sight throughout this entire tour, by the way. 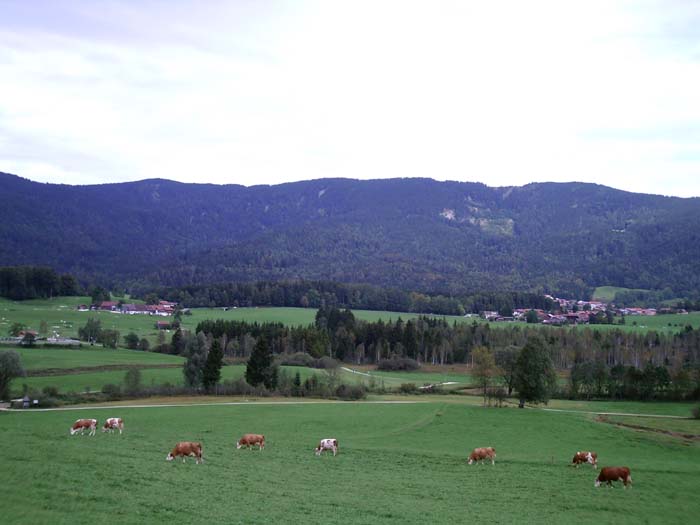 Now a final panoramic shot for the day (hmm, I didn't quite keep the camera level this time, but you get the idea).

After meandering through Inzell a bit we found our hotel: 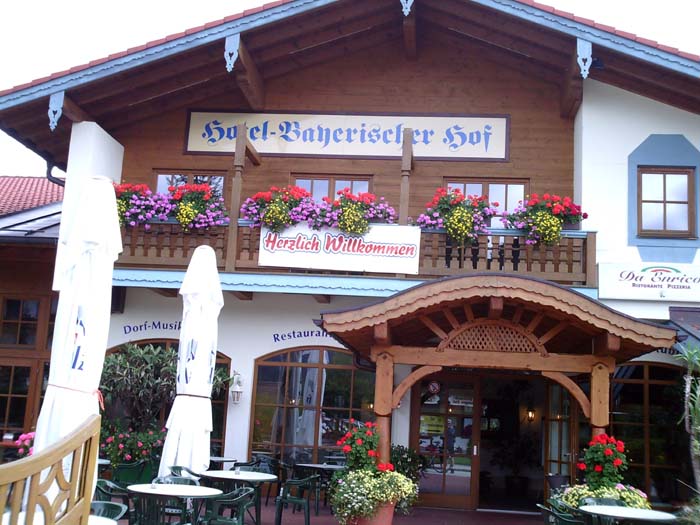 Not as much English was spoken here, making it harder to get things done (signing in, for example, was difficult, and even something as simple as getting a bucket of ice proved challenging...when I asked for ice, I got an ice cream list from the dessert menu in the hotel restaurant - eventually I got my point across by showing them an ice tray from the non-functional refrigerator in the hotel room). Still, the place is pretty nice, and since it caters to skiiers in the winter, it's downright huge. This is the off-season, so hardly anyone is here, making this gigantic place seem almost deserted.

Here's a couple of views out our back window, by the way... 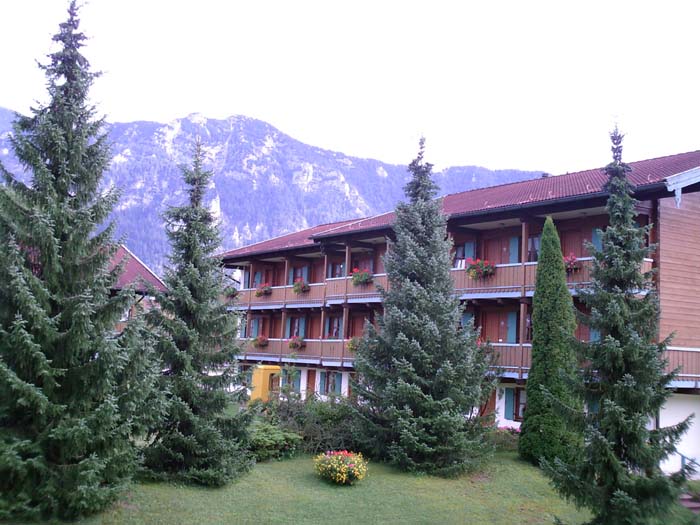 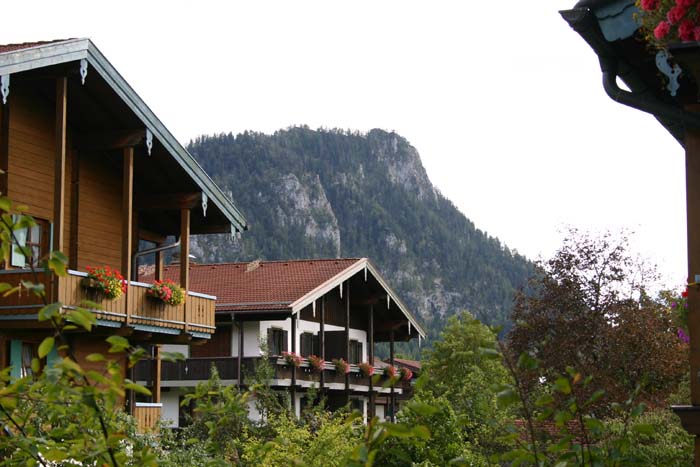 Each of those buildings probably has 40 or 50 hotel rooms in it, so like I said, the place is pretty big. We were both rather tired after all the hill climbing today, so rather than walk around or try to ride through the town, we just stayed in the hotel and ate at the restaurant there. I'm starting to really enjoy weinerschnitzel.