Miami to Ft Lauderdale
Miles: 51
Terrain: Flat (but I did climb 3 hills and go through a tunnel)
Weather: Partly cloudy, hot and humid, 10mph variable winds

Finally! A good night's sleep. I felt much better...at least at the start of the day. I hung around a while at the hotel, not in any big hurry to go back out in the heat, and finally got going shortly after 11. The day went pretty much like yesterday...a few miles of okay riding, followed by the onset of nausea and overheating until finally I'd have to stop after 6-8 miles. The second time, I waited a bit too long and wound up hyperventilating for a while in a local convenience store/diner just short of downtown Miami. After downing some Gatorade and banana, I resolved to take it easier and be more careful the rest of the day, and there weren't any recurrences, although I still had to stop regularly and continually battled with the upset stomach. Even some pink busmuth didn't really help much. I suppose I shouldn't really be surprised that I feel this way, because that's how it's been at the start of pretty much every bike tour I've ever done, but still, it's damned annoying.

A few miles after that difficult break, I came to downtown Miami and got a look at the waterfront there. The view was worth all the trouble today. That's why I do these tours, after all. To see some things I've never seen before, and actually feel like I've earned the view.

Anyway, after that I rode on along US-1, pretty much all day, passing through heavily populated areas that for the most part weren't worth taking photos. The going was slow, not just because of the heat, but also because of all the streetlights and traffic. Most of the time I just felt wasted and spent, and the very few hills (bridges, really) plus the tunnel felt like 1,000-foot climbs. Honestly, I'm really not sure how I made it 50 miles today. I should've stopped at 20. Every mile feels like 5 in this kind of environment. Next time I do a tour, it's going to be during cooler weather!

Oh, and also, I found out about the 45-mile point that I'd been riding along on a broken spoke for who knows how long. I haven't broken a rear spoke in years, ever since I started using the "bomb-proof" extra-heavy duty rear wheels provided by my local bike shop. I guess the wheel doesn't like the weather any more than I do. Fortunately, even though tomorrow's Sunday, there's a shop about 3 miles north of where I stopped that (hopefully) will be able to fix the problem. I might be able to do it myself, but since I have to take off the wheel, remove the tube and tire (the break is inside the rim), and disassemble the freewheel, I'd rather not have something go wrong with that out in the heat. Plus the shop can probably do it in 15 minutes with the tools and stand they have available, whereas it'd take me much longer.

So anyway, I found a nice hotel for cheap ($50) in Ft Lauderdale and stayed the night. Tomorrow, more pain and heat exhaustion! Yay! Oh, and just in case you might think I'd missed out on another fun thing about riding in the heat, here's what my legs and arm look like... 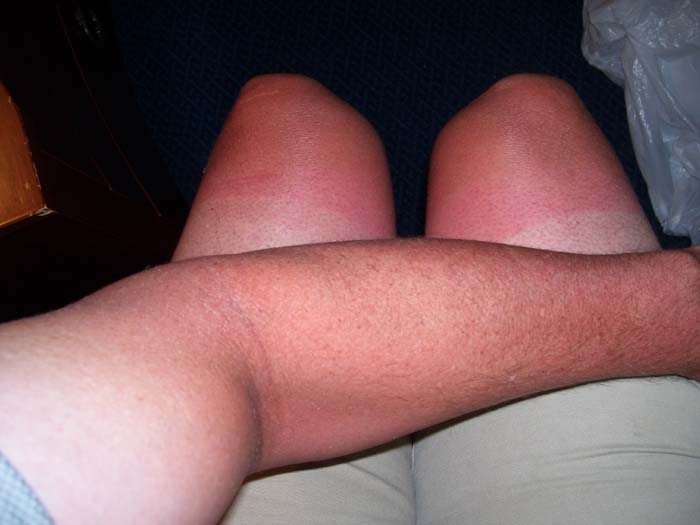 When I got into Miami, they had a light rail system running all the way downtown, and underneath it they had this bike path that kept me off US-1 for a while. (It's off to the right a bit.) Too bad it didn't seem any cooler in the shade. 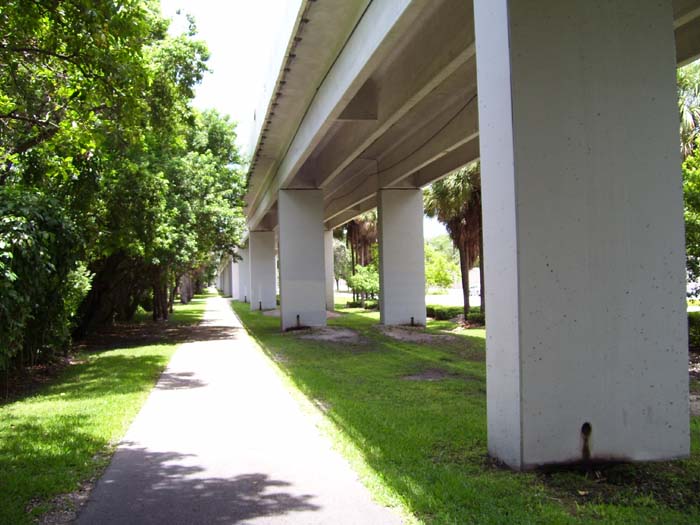 At one point on that bike path, I crossed over a pedestrian walkway, giving me this nice shot of Miami's skyline. 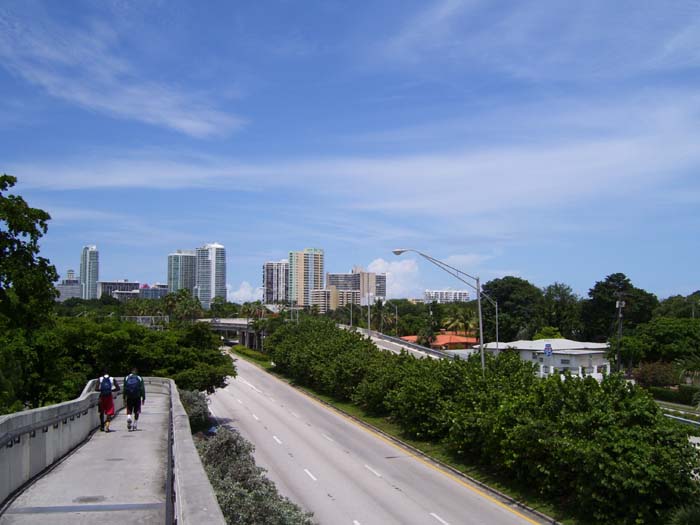 Once downtown, the road featured palms right up alongside the skyscrapers. 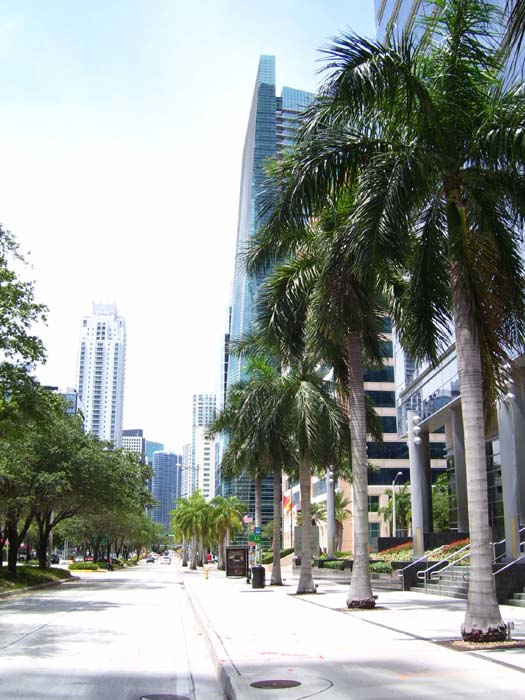 At the waterfront, I tried taking 4 pictures in a panoramic style, stitching them together with Photoshop. As you can see, the camera lens gives a slight curve so the buildings on the edge seem slightly warped, but you get the idea. To the left is the Port of Miami, and then as you pan right (use the scroll bar at the bottom of the window) you can see all the buildings adjoining the river. Boats kept passing by, so I suppose there must've been some marinas further in, though I didn't see them.

Moving along, the weather started to look bad again (this is shortly after leaving Miami) but I must've been chasing this storm, because I never quite caught up with it. 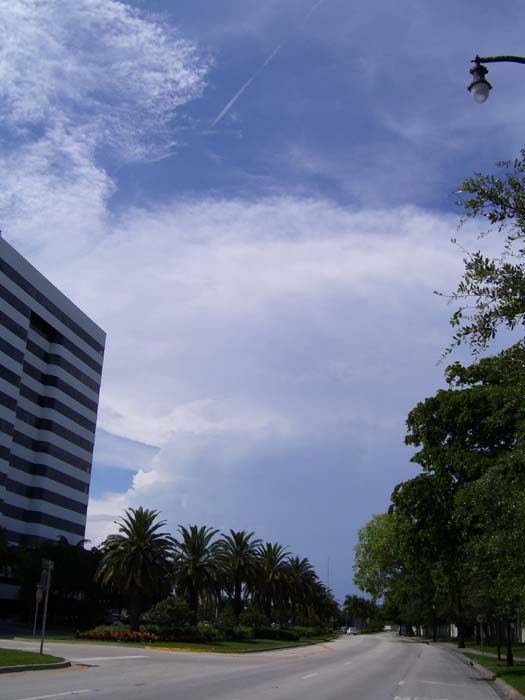 This is a look at Ft Lauderdale as I went over a bridge near the airport. That section of road was a highway (the only highway I've been on this whole time), but only for a couple of miles, and it wasn't restricted or anything. 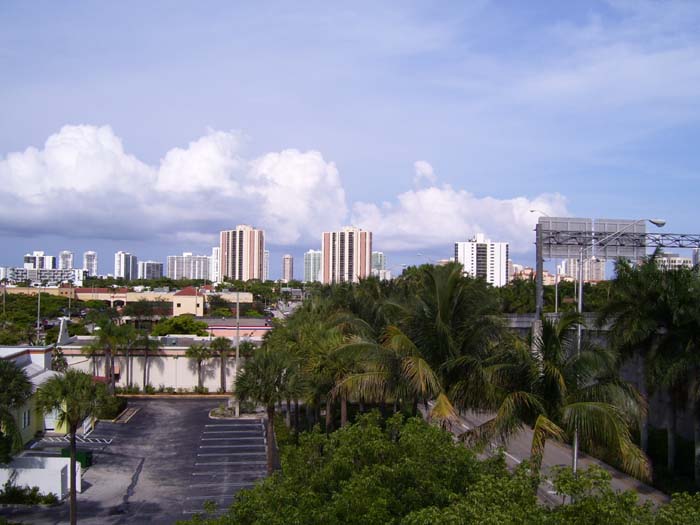 Close to the end of the ride, I took this last picture because it sort of suggests what I've been looking at pretty much all day...buildings, the occasional parking lot, plenty of strip malls, and assorted trees and palms. Perhaps tomorrow I'll see some beaches. 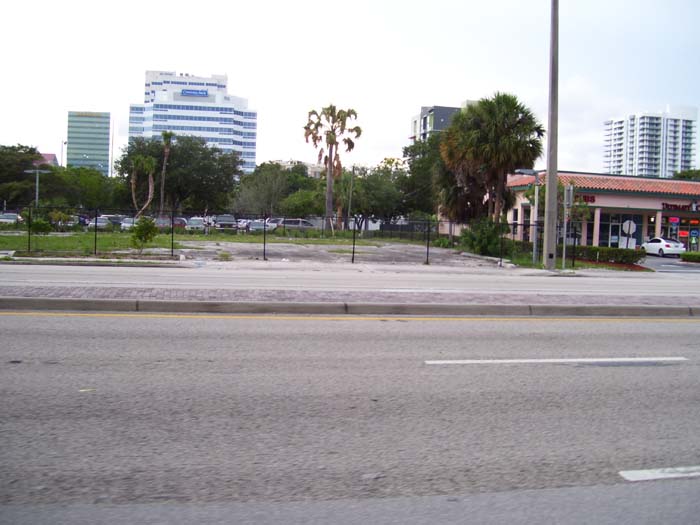 Anyway, that's all for tonight...more later, after I get my bike repaired.