B5 Wars Ship of the Month (Final)

For the past several years, AOG has provided a Ship of the Month to our loyal fans here on our web site. We regret to announce that this month features the final SOTM due to the closing of our license. As a result, we've decided to go out with a bang and provide one of the most requested ships of all time. Regrettably, we never did secure the rights for the Excalibur or Drakh, so please don't email requesting such units.

Thanks for supporting our Babylon 5 Wars project for these last few years. We really do appreciate it. --Agent One

Early on in the Earth-Minbari War, the EA found itself awed with the sheer size and power of the Minbari Sharlin War Cruiser. Lacking anything that could stand up to one in a toe-to-toe fight, planners began the process of coming up with designs for a "supership" that could face off against a Sharlin and come out the victor. The project, code-named "Medusa," produced a variety of radical designs, none of which ever saw development. After the war, however, rumors persisted that the Minbari destroyed a partially built ship of immense size at the Proxima shipyards. No trace of this hypothetical "Medusa" survived the conflict, and not one shred of evidence exists to show the ship ever made it past the drawing board. Even so, many still insist that, given another year or two, the EA might have fielded one of these tremendous vessels.

The Medusa never existed, so a true control sheet cannot be produced. Shown here is a "best guess" estimate of the ship's capabilities, using cutting edge EA technologies of the period (the late 2240s). It is unlikely that the EA could have actually fielded something this powerful. True to Earth Alliance doctrine, the ship would be slow and difficult to maneuver, but packed tremendous firepower. Presumably, should such a ship be built in more modern times, heavy particle cannons would appear somewhere on the hull, but as a member of the Interstellar Alliance, the post-Civil War EA has no need for such a ship.

Designer's Note: Players have wanted to see the Medusa ever since we put one in the original Earth Wars playtest pack. The original ship (in First Edition) was basically "two of everything EA uses on a single hull." This version is much more reasonable. It is, however, totally conjectural, and should be treated like the Poseidonova or White Sharlin - a joke ship not intended for use anywhere except "just for fun" scenarios. If you really insist on allowing one in a campaign or something, it would be at best a rare ship, more likely a unique one, with a year of availability of 2250. Note that this ship has the Poseidon's command bonus, which would not be cumulative with any other bonuses should a Poseidon actually be in the same scenario.

Trouble reading the details on the file below? You can download a PDF version of this ship. Note: You need the Adobe Acrobat Reader to read a PDF file. Click here for a free download! 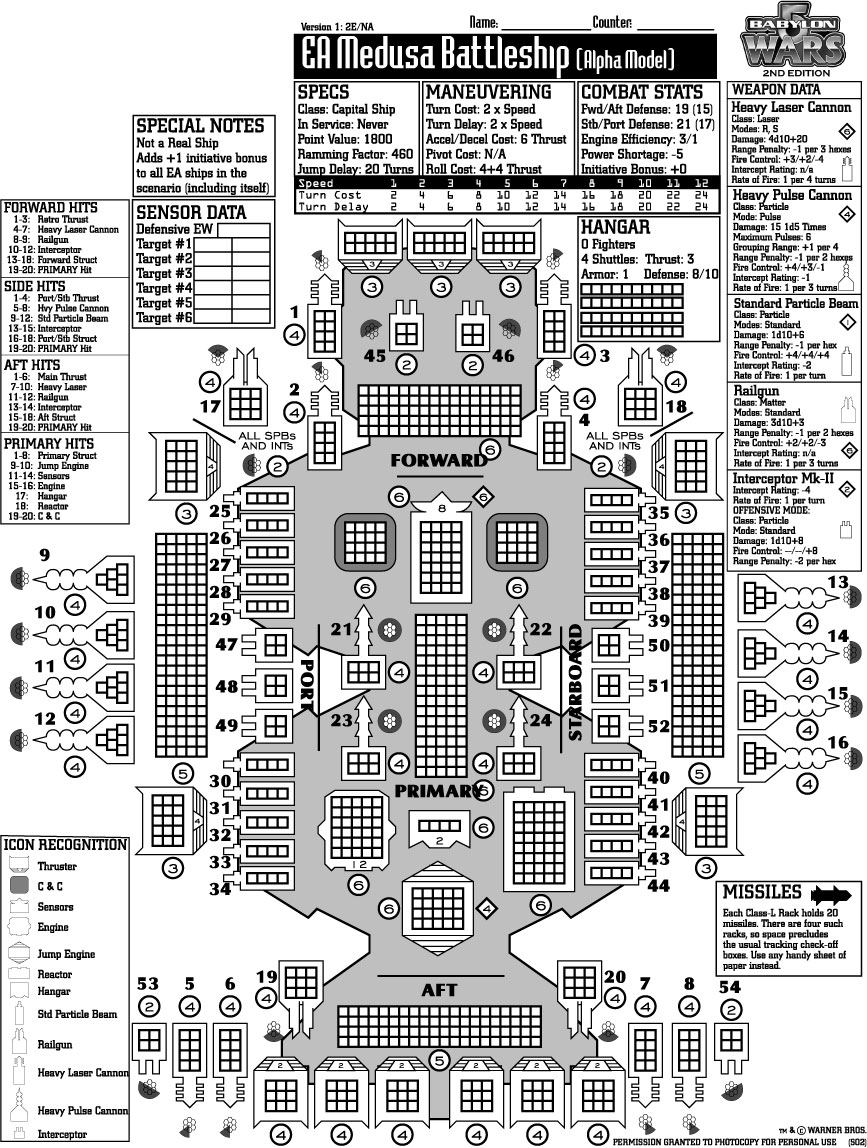 Previous Ships of the Month (in zipped PDF Format):

If you need rules for any of the ships from April 2001 or later, click here.