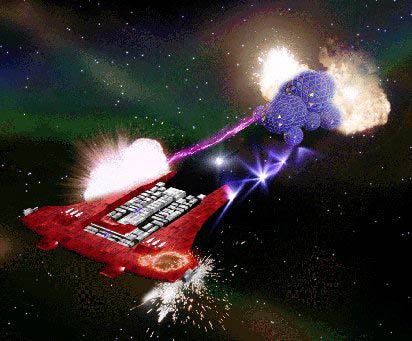 Some Star Fleet Battles products are offered by Agents of Gaming under a special license from Amarillo Design Bureau and Task Force Games. These products include the following:

If you want more info about Star Fleet Battles, or the latest news on SFB, check out the following links:

OMEGA SECTOR UPDATE: As many of you know, AOG has been heavily involved in producing a series of SFB products referred to as the OMEGA PROJECT. The Omega Sector, a new segment of the galaxy beyond the ISC, consists of dozens of new races in almost constant conflict. Module Omega-1 first appeared at Origins 1999, and Module Omega-2 (expanded rules and additional ships for the eleven races in Omega-1) went to press in February 2000. Modules Omega-3 and Omega-4 are in various stages of development. For further information on these products, see ADB's web site (above). Thanks to everyone who helped make the Omega Project a reality! --Agent One