Canadian border to Mt Vernon, Washington
Miles: 58
Terrain: Mostly flat except for about 15 miles of tough climbs
Weather: Sunny but hot (over 90)

The day began with a long drive from Lacey to the Canadian border, courtesy of Phil. Stopped at AAA on the way to get some maps, which are always good to have, even if they aren't designed for bicycling. We were able to get online and figure out a good route to take, and I hand wrote street names onto the map for later identification, which was good as otherwise I would've missed some turns. Not that it was easy to get lost, with a mountain ridge to the east and water to the west. All I had to do while riding south was make sure the mountains were always left of me and the coast on the right. I still needed street names, though, in order to find specific roads I needed to turn on.

The first 30 miles or so were fairly normal, mostly flat and not very populated, passing through a lot of fields and farms, plus the occasional power plant or factory tucked away in the middle of nowhere. Upon reaching Bellingham the hills started. Bellingham itself has some steep climbs in it, as it's built around a bay and rises up into the hills, so it has a tiered appearance (flat streets with buildings, then a steep climb up to the next street). I should've reloaded on water here, but I had no idea what was coming next. The first few hours of flat terrain had spoiled me, so I wasn't prepared for the difficult terrain ahead on Route 11. This road, one of the most scenic in the area, follows the coast through thick forests, up and over numerous tough hills. The scenery was definitely worth it, but I drained all my water bottles and my legs were hurting afterwards. Plus I still had 20 miles to go. Fortunately the rest of the day was flat with little to test me as I eventually rolled into Mt Vernon. I probably could've gone farther, but there was no need and the day's heat had taken its toll.

The hotel I chose was cheap, but still more expensive than what I'm used to back home. I paid $50 for a room that had no A/C and a flaky Internet connection (which was the main reason I wanted a hotel in the first place). The ice machine was also broken, but the kind lady running the place gave me some from her fridge, so I guess that's something.

Photos from today follow. Sorry, some turned out blurry for no identifiable reason.

The first batch are from the Canadian border. The sign facing you says "Leaving United States Border" or something like that, while the sign on the other side says pets must be on a leash. You can tell which country is more concerned about border crossings, can't you? 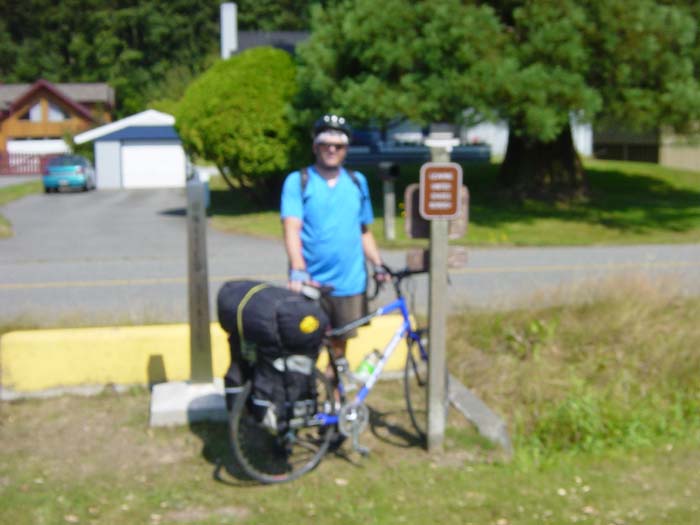 The other side of the yellow block on the ground is Canada. To the left and right there's a deep trench. Clearly the way to keep people out of Canada is to dig a trench and then block any access point with a thick yellow piece of concrete. That'll stop 'em! 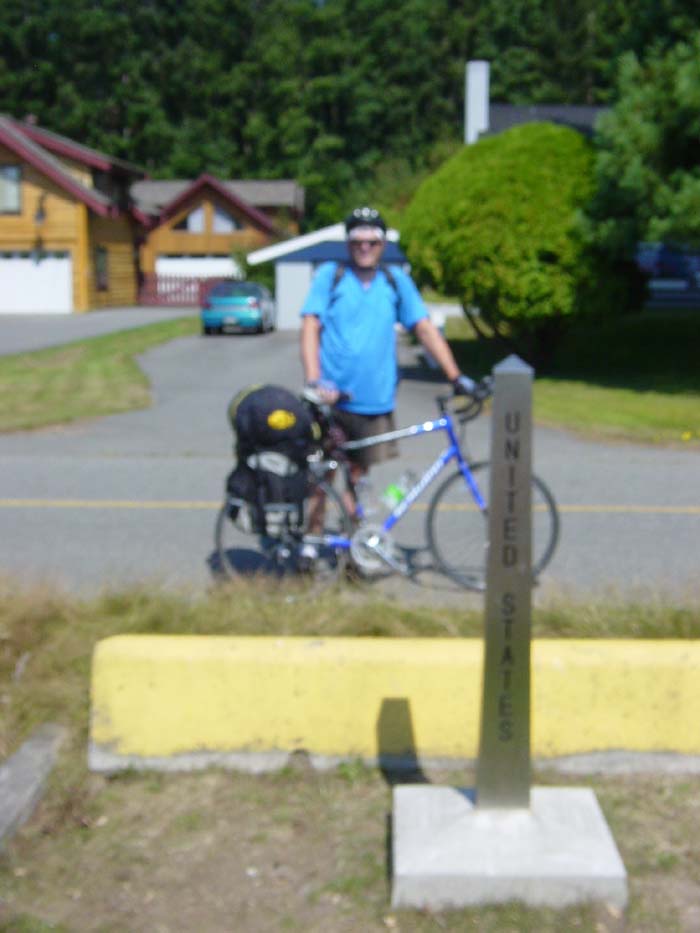 Yep, this must be Canada, all right. They have a flag. 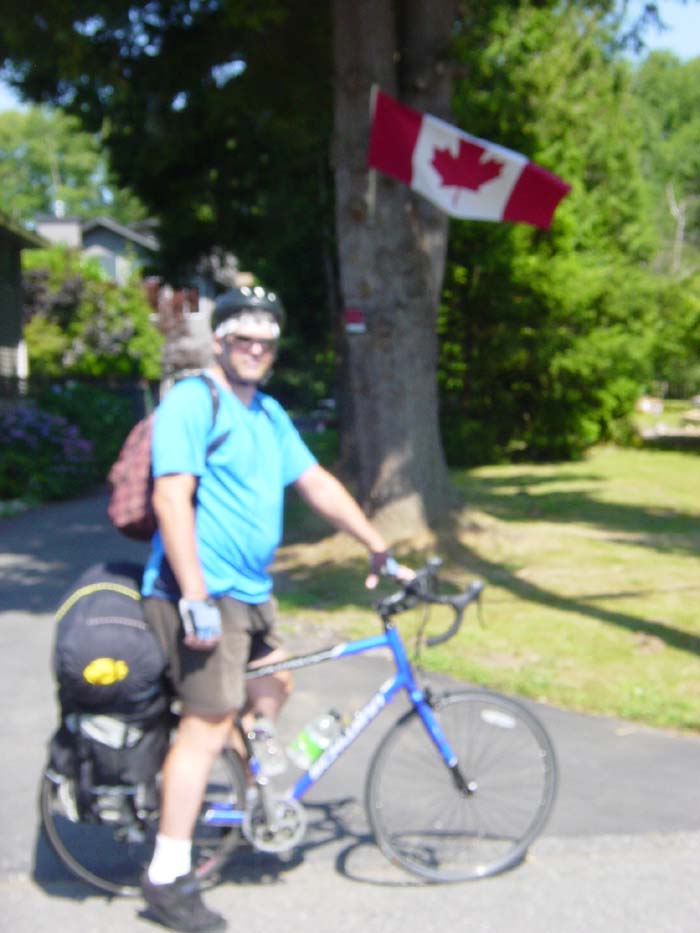 The Peace Arch is in the background. To the right, not visible in the picture, is a line of cars on that road there waiting to get past the border checkpoint. The wait was about 30 minutes, so I didn't bother trying to get my passport stamped (no reason to anyway as I wasn't actually going into Canada for any other reason, and I can step across the border just by going right a few yards). 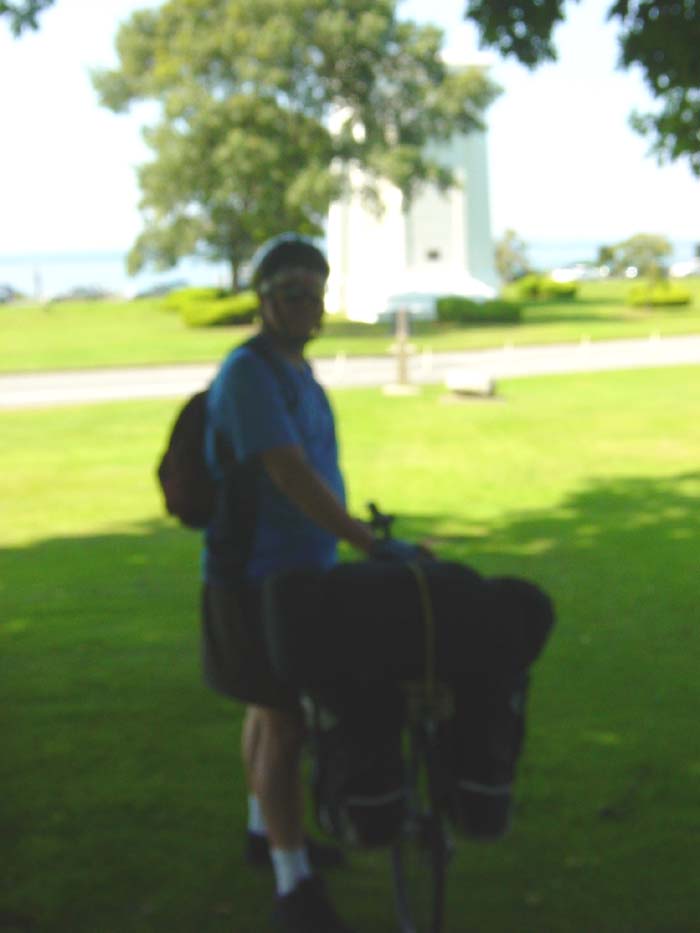 The Peace Arch. This is a monument to open borders between our two countries. Inside, there's a wrought iron gate that stands open, with an inscription saying "May these gates never close." 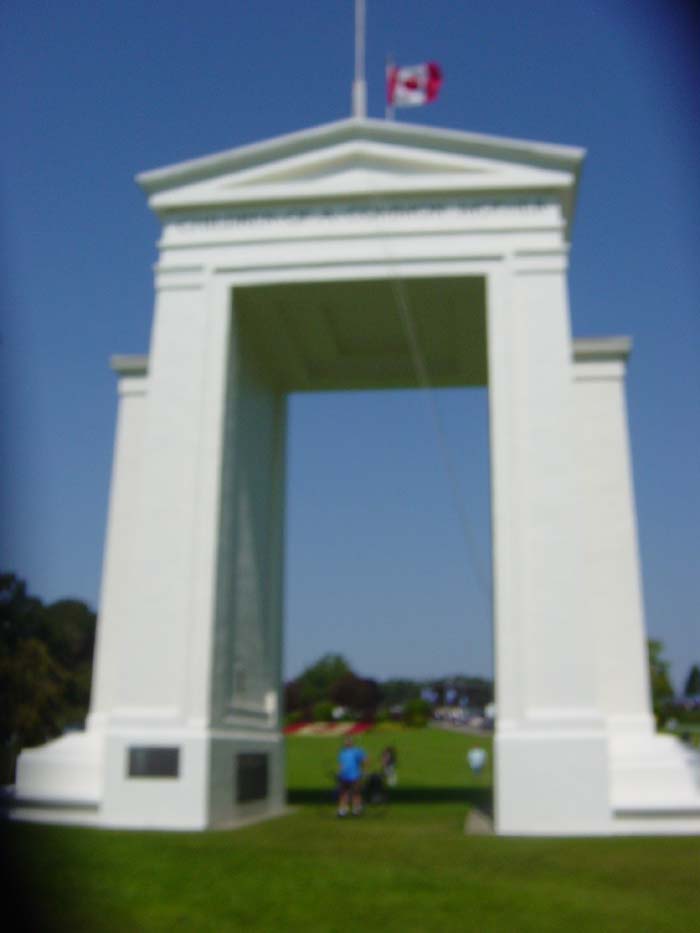 On the way back to the car, stopped for this picture on the border road in Canada, named "0 Ave." 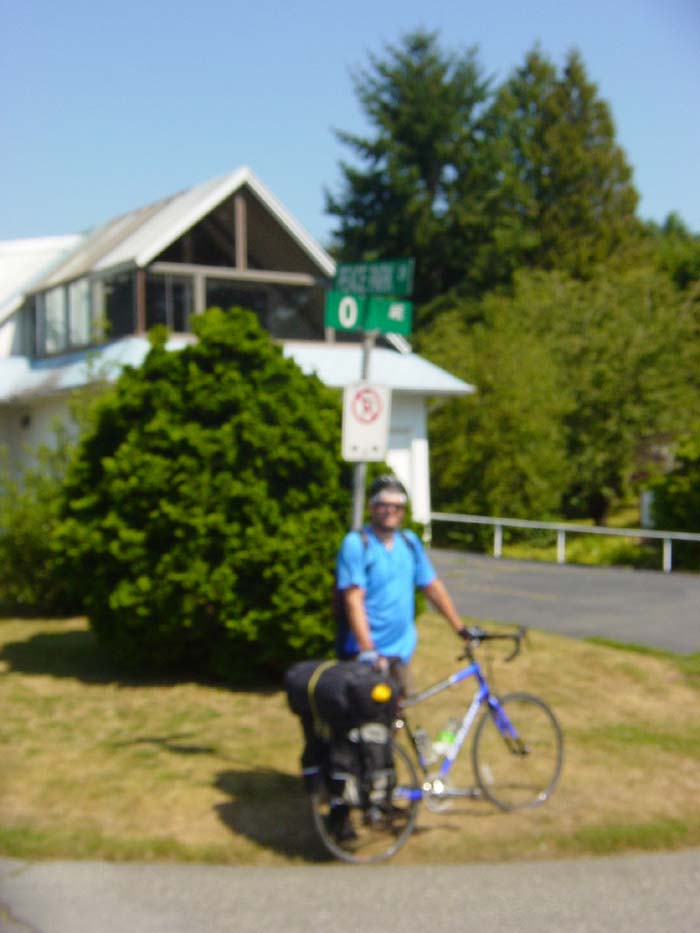 Now, mysteriously, the photo quality got better. Not sure what changed as I didn't do anything to the camera, but it's better now. One last shot of me leaving Peace Arch Park. The bike, by the way, is loaded down with about 40 pounds of gear. It took a while to get used to riding it with that much weight in the back. 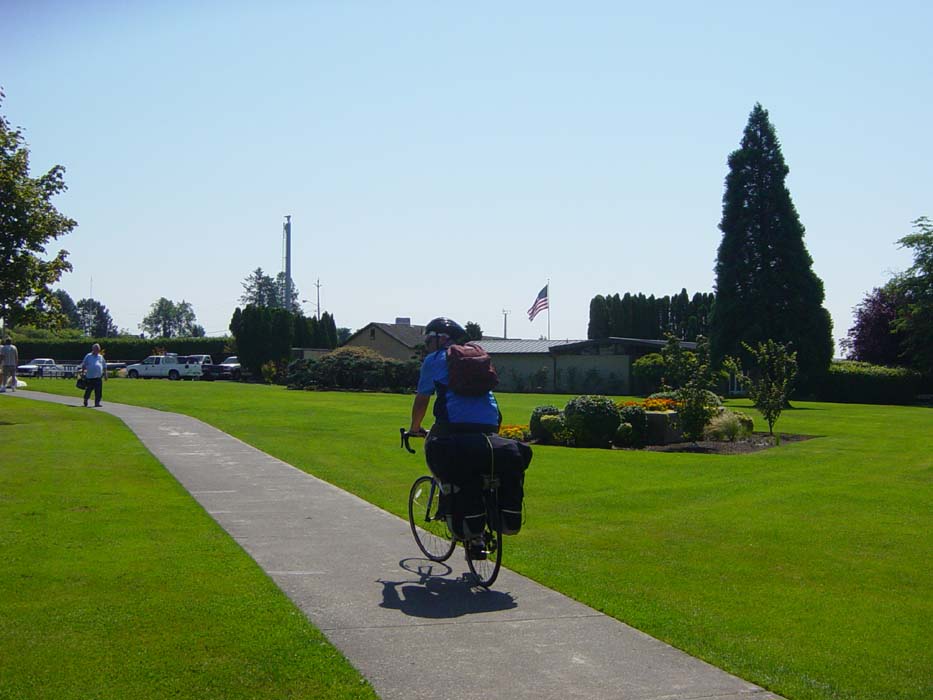 Stopped for a quick shot of this marina on the coast, which looked to me like a giant boat parking lot. Shortly after taking this, the ride moved inland for a while. 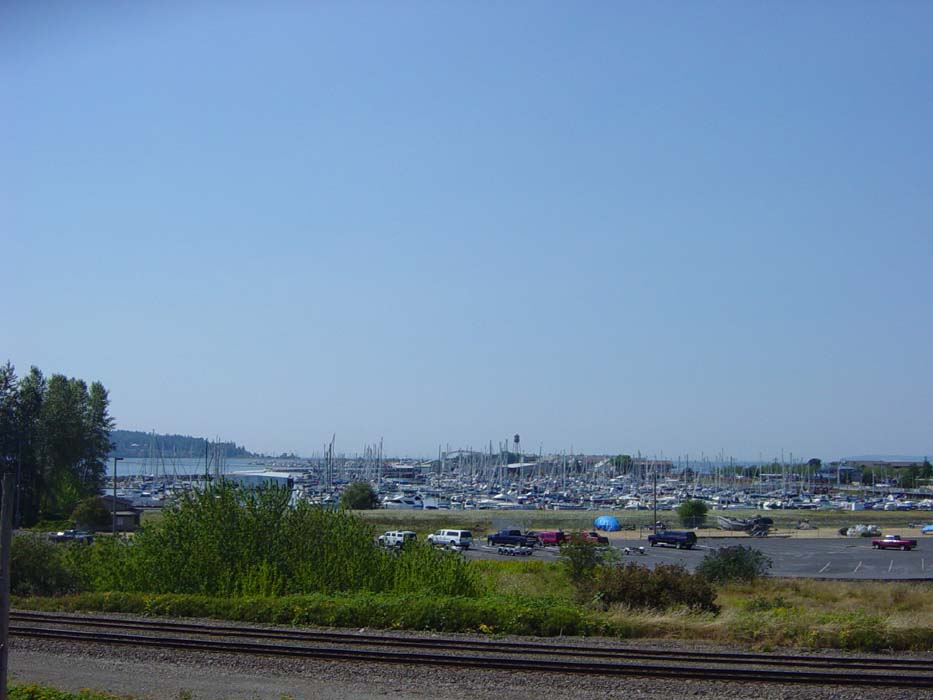 I kept passing through fields like these below, which I later found out were tulip farms. They aren't in full bloom yet, apparently. The scent was overpowering. (Update: These aren't tulips. Not sure what they are, really.) 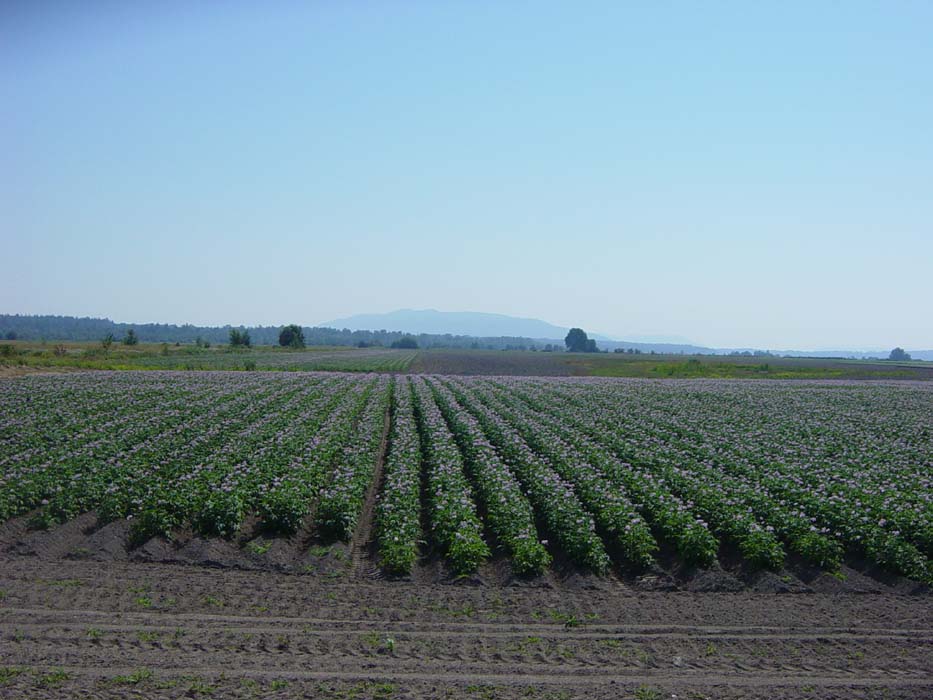 Turning east for a bit, I found Mount Rainier was directly ahead and snapped this picture. The peak didn't really show up that well, unfortunately. 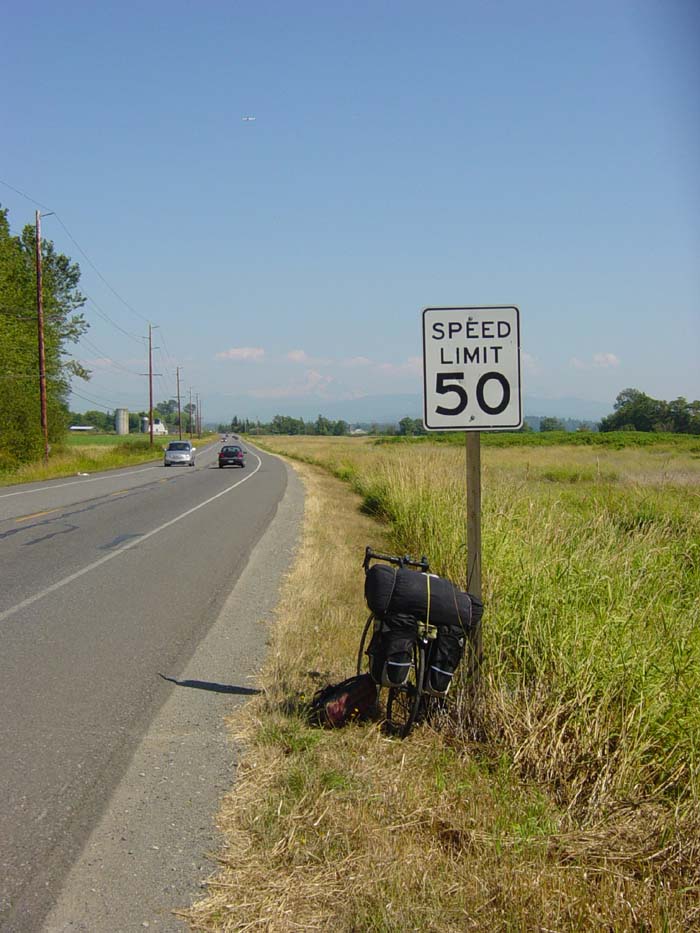 Getting close to Bellingham, finally got back to the coast again. This view is from a park looking out at the bay, with the town sprawled out all along the coast. That mountain there in the distance is what I had to go around later, following the line of the coast to the right. 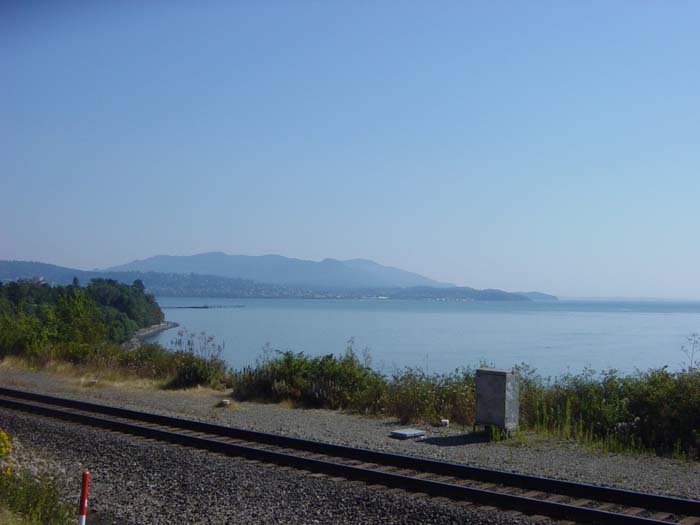 Photo opportunities were tough to find in the hills, as it was very shady so pictures didn't like to turn out. Plus, the road was winding and narrow, and most of the spots where it was wide enough to stop, the views were blocked by trees. Here's one picture I managed to get during a water stop. (At least the shade kept it cooler, because the temperature was over 90 degrees at this point, unusually hot for this area.) 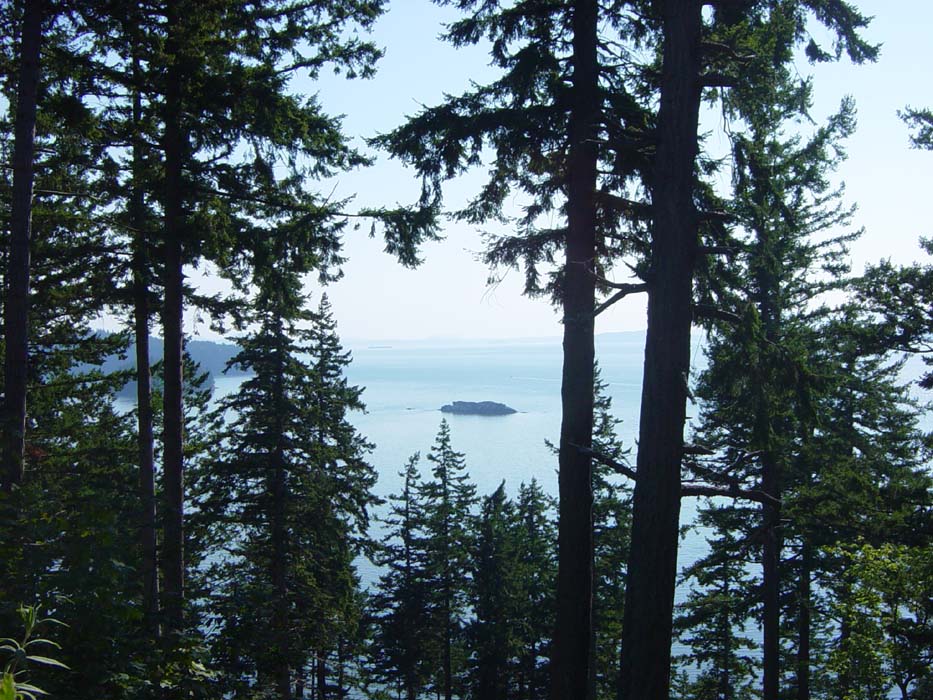 Occasionally the road would open out into the sunlight, but only rarely. Most of the time it just wound up and around through rocky cliffs and along steep dropoffs. This particular photo is looking back the way I just came, so you can get an idea of the kind of climbing I'm talking about. By the way, the scenery was amazing. If you live anywhere near here, take a drive up route 11 sometime, and maybe bring some hiking shoes. There were lots of places to stop and take short hikes. 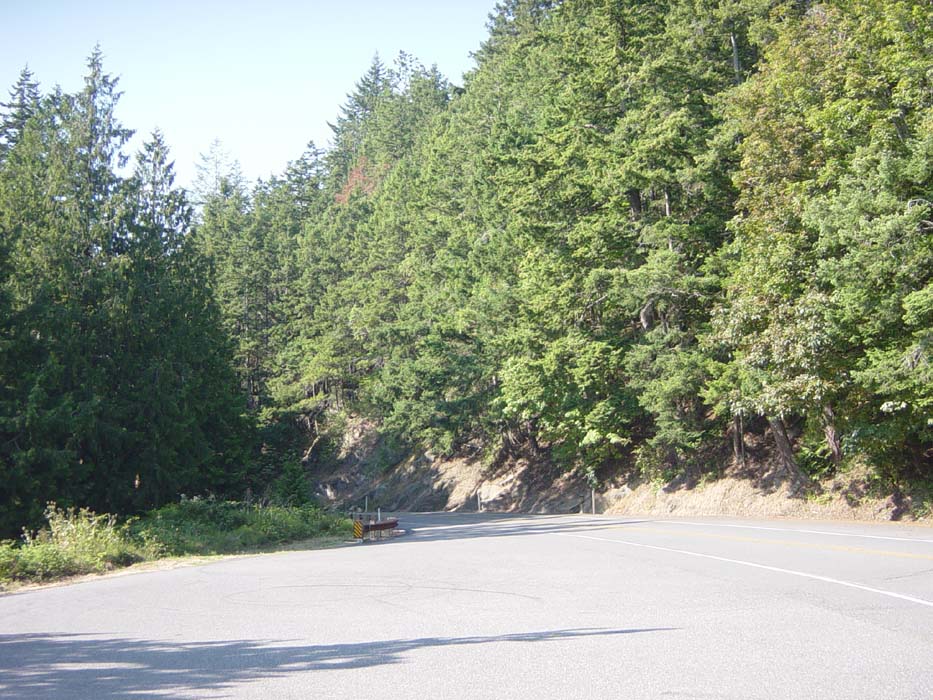 Another shot looking out at the bay. Note the freighters passing by in the distance. I tried to make a video of this particular scene using the digital camera, but the resolution was so low you can't see anything. 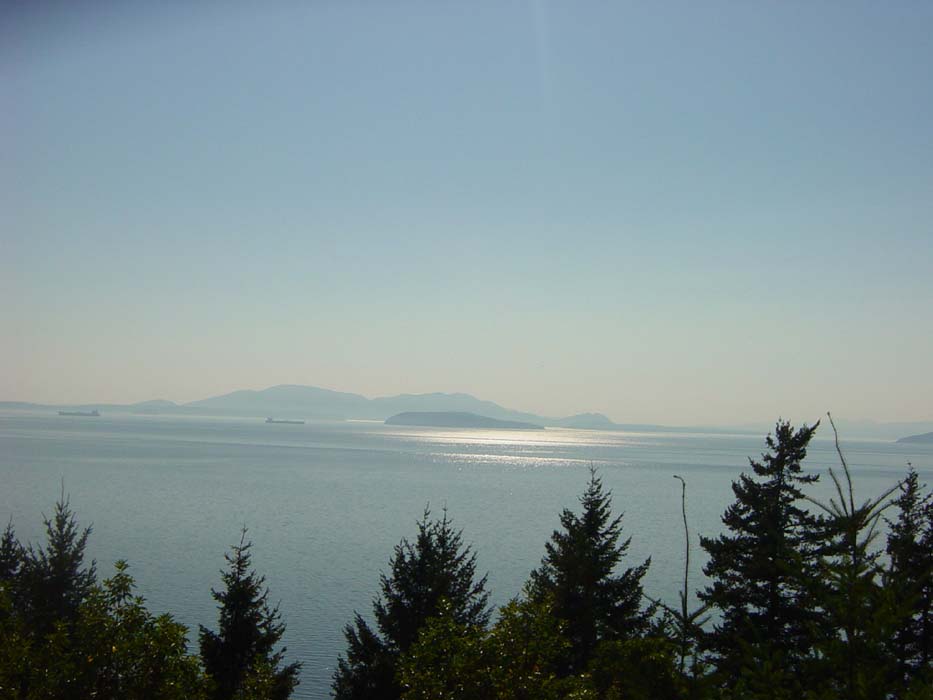 This photo is looking back at the mountains I just came over. From this point on it was basically flat and boring so this will be the last picture for today. Tomorrow will likely be more riding through populated areas, so there probably won't be as many photos. 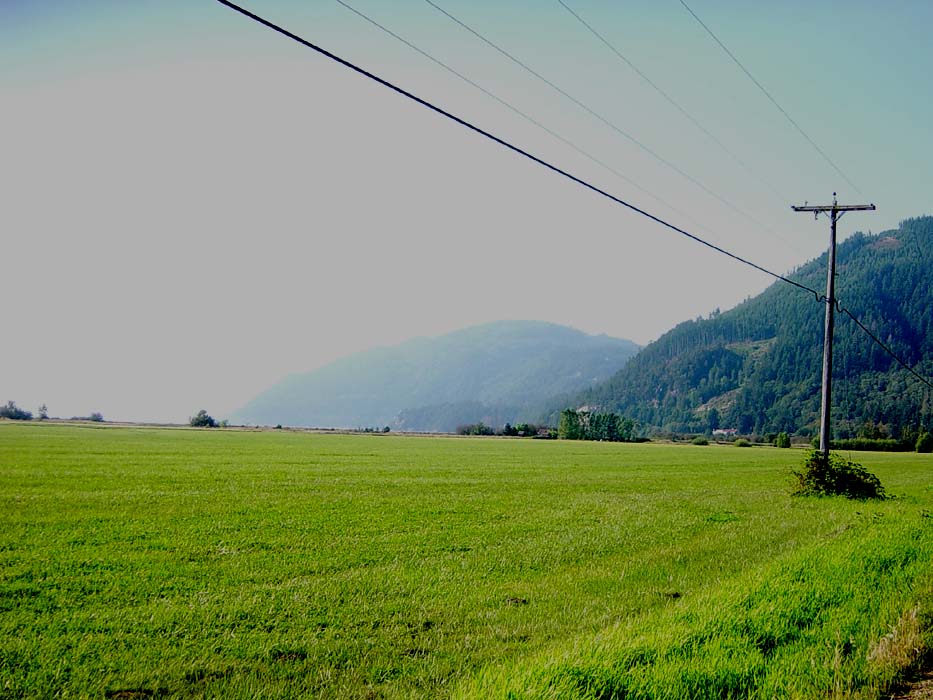