Today I decided to head to Phil's place in North Bend, a much shorter ride than the previous two days. The thought was to relax and have an easier day of it, and for the most part it was, as the terrain was fairly ordinary and the winds, while in my face, weren't all that terrible. However, I was having difficulties pedaling all day, and shifting the weight around on the back of the bike didn't seem to help. So I stopped at a bike store in Monroe, about 10 miles down the road, but it wasn't open for a couple of hours. The intent was to buy some chain lube (they don't let you take that stuff on airplanes, so I couldn't bring any along beforehand) and getting more hadn't been a real priority until now. Plus, the rear tire had finally worn out the previous day, so one of the evening's activities yesterday was to replace it with the spare I brought along. (If you look at some of the previous pictures, you can see this tire poking out underneath the duffel bag.) Although the new tire was pumped up with a compressor at Brandon's place, presumably to 100 psi, I knew it could stand a little more air. What I didn't realize, and found out much later, was it was only about 60 psi, meaning all the pedaling trouble was due to the low pressure. Once it was fixed, things got much better, but unfortunately that wasn't until the end of the day.

After leaving Monroe, I headed south to Duvall, and along the way found a set of car keys on the side of the road. Every now and then when cycling, you find odd lost things here and there. I've found cash, sunglasses, a portable radio, a satellite dish (yes really, it was one of those Dish Network ones still in the shipping box), and other similar items. So I picked these up, headed into Duvall and handed them over to the police lost and found. Then I went to get on a bike path I'd seen the previous night on Google Maps, intending to ride that all the way into North Bend, only to find the path was only crushed gravel, not paved. You can ride a mountain bike or hybrid on crushed gravel, but not a road bike with 40 pounds of gear on it, and especially not with low tires.

So, I stuck to the roads and went on through Carnation and Falls City, where the road turned east and I quickly learned why it was called Falls City. As it turns out, the Snoqualmie Falls (which are higher than Niagara Falls, actually) are at the top of a series of nasty switchbacks just a few miles ahead. The climb was brutal, and the only thing good about it was it was in the shade. At the top, I was exhausted and my legs felt like rubber, but after about 15 minutes exploring the (very popular) park and taking some pictures, I was ready to go again. The rest of the ride was a smooth easy run into North Bend, where the rest of the evening was spent hanging out with Phil and helping him deliver pizzas, which was surprisingly entertaining and not at all risky or dangerous. In fact, it seemed like cars tended to get out of our way once they saw the delivery sign on top.

Now for some pictures. The first one here is of downtown Monroe, a quaint little town that wasn't too busy or crowded. The bike shop I was here to visit is just to my right, but didn't open until 11 and it was only 9:30. I didn't wait.

Also, as an aside, there are "buy gold" places everywhere, in every town, not only here but back home as well. I guess buying gold is the new craze or something. Plus, as a bonus, at this place you can get your nails done while you sell your old jewelry. How convenient! 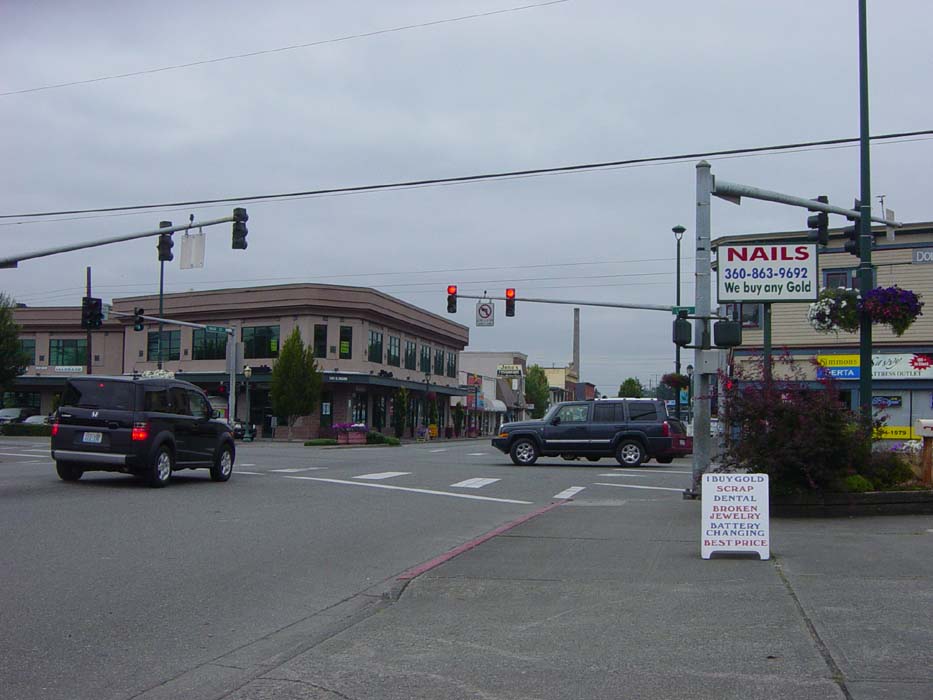 While riding along towards Duvall, the sound of a chainsaw pushed its way through the traffic noises, and looking back I saw a man high up in the trees trimming branches away. I thought perhaps this was someone cutting the tree down, but actually I think he was just clearing power lines. Still, he's awfully high up there. That's a job I wouldn't like to have. 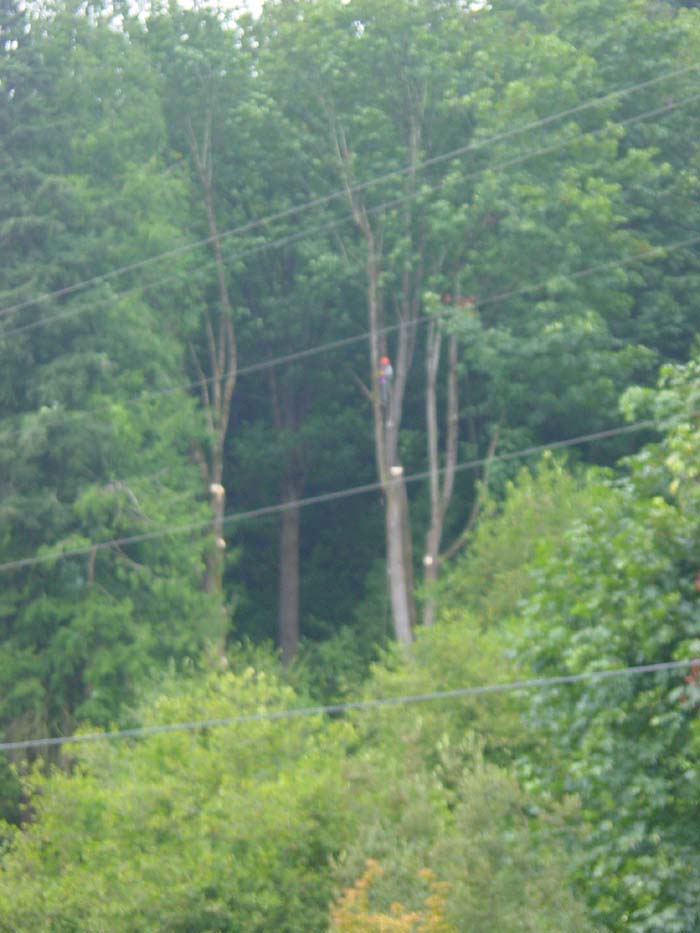 Wildlife Sighting of the Day: Further along, the road passed alongside miles of natural wetlands, mostly ponds and the like covered with lily pads and the usual sort of stuff you see in slow-moving water. There, right in the middle, was a great blue heron. You can see it perched on the branch in the middle. Unfortunately, at full zoom the camera loses resolution, but you get the idea. 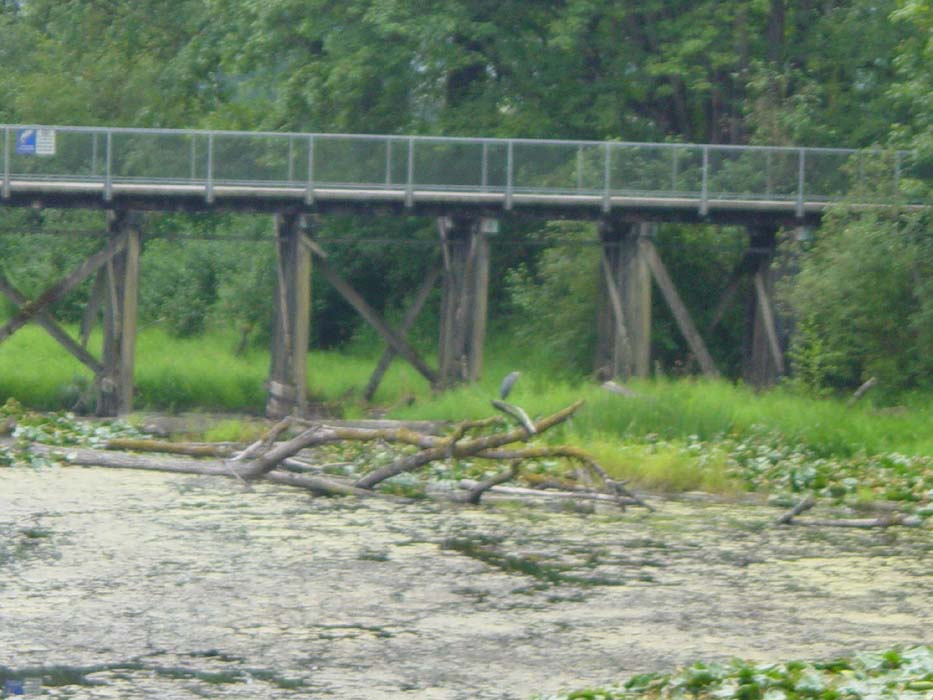 After stopping briefly to adjust the gears so they'd actually reach the biggest chainring (preparing for the climb to come, which Phil had warned me about), I finally got to the bottom of the switchbacks. This is a picture of the Snoqualmie River at the base of the mountain, which I then had to climb...and climb very, very slowly. I'm not sure my speed exceeded 5mph anywhere along the road, which went on for about 3 miles and about 1000ft of elevation gain (i.e., pretty steep). 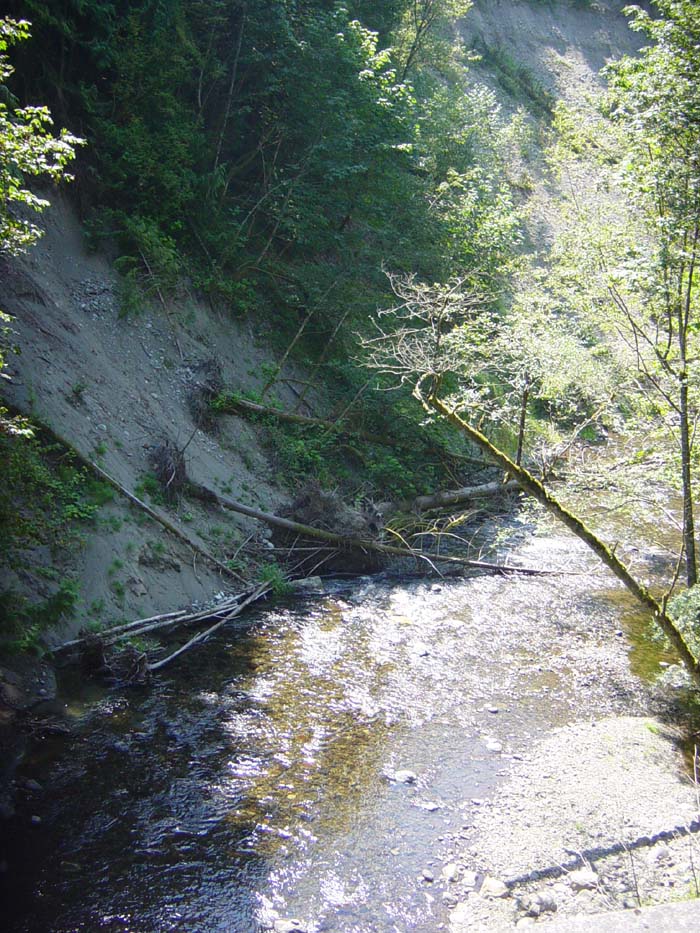 Halfway up the switchbacks, stopped for a break and this picture of the valley I was leaving. Too many spectacular views up here...I'm suffering from scenic view overload! 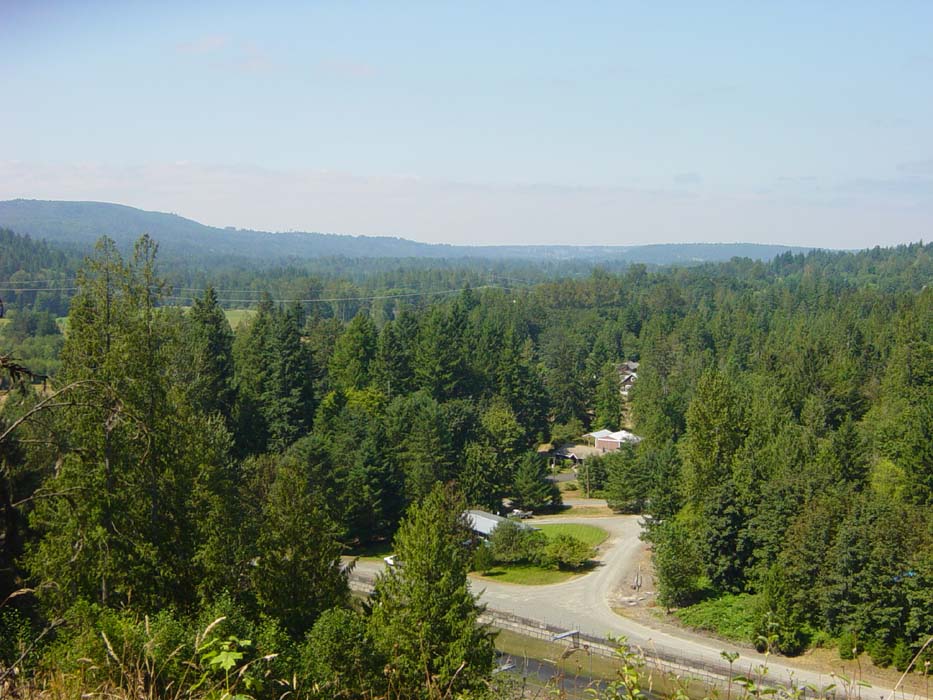 Now here's a high-res photo of the actual Snoqualmie Falls (use the scroll bar at the bottom of the screen to scroll right and see the whole image). Pretty impressive, for something few people have ever heard of. Niagara Falls gets all the press, but this was at least as cool. The construction equipment at the top is tearing down an old power transfer station and replacing it with a visitor's center, in case you were wondering. There's also a scenic train ride you can take that runs right along here...you can see the tracks behind the cranes. 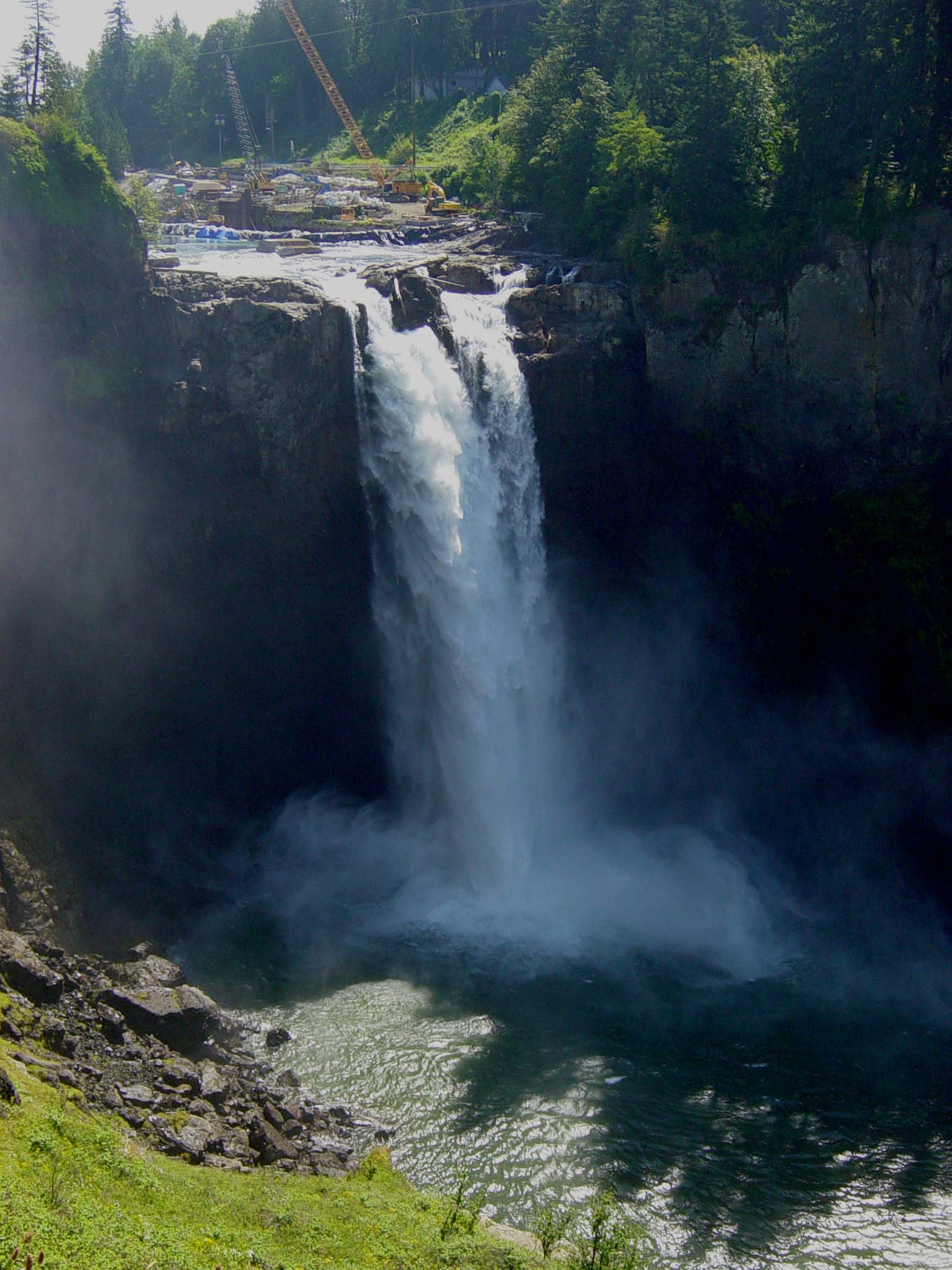 Just to prove I was really here, I had a random passerby snap this photo. When I got up today it was only 55 degrees, so I started off wearing the long-sleeve jersey and sweatpants. This had to go before the climb, so the sleeves are rolled up and the sweats are strapped under the bungee cords holding the duffel bag in place. 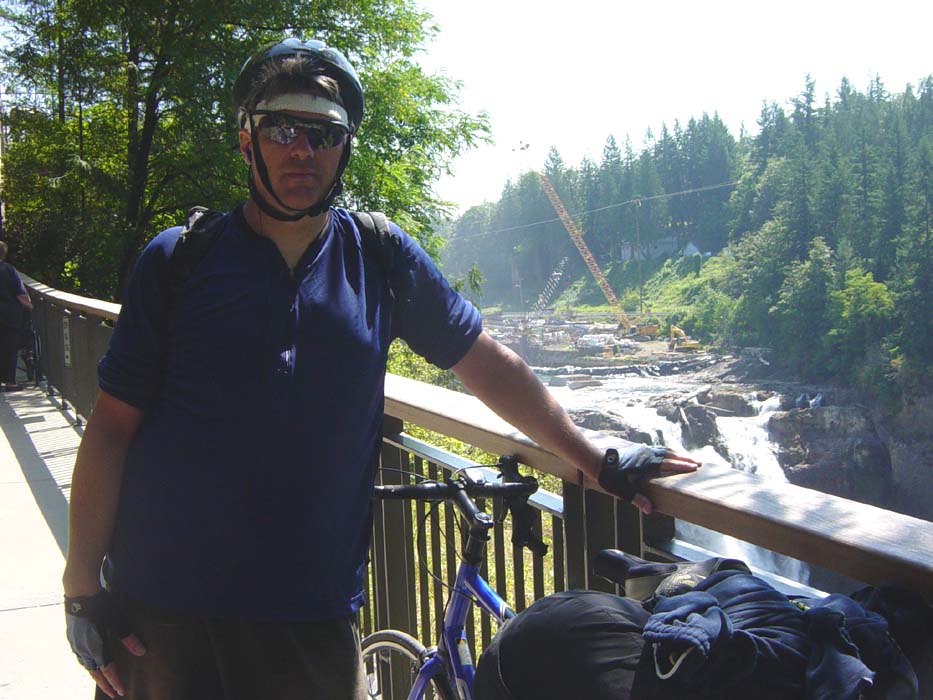 North Bend, if you don't know, is where the classic TV show Twin Peaks was filmed. This shot below shows the Tweeds Cafe, which was known as the Mar-T Cafe in the show. You can still buy a Twin Peaks Cherry Pie and Damn Fine Cup of Coffee there. I'm not sure what that means (having never seen the show) but fans will understand the reference, I'm sure. Also, just FYI, the view of the mountains around here is fantastic. 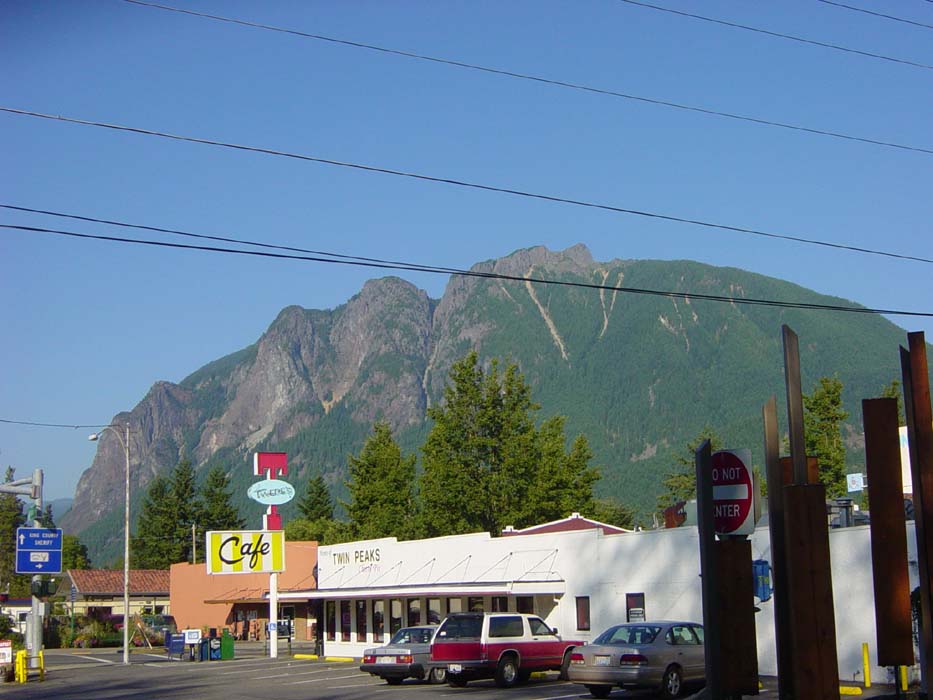 After getting here, I found a bicycle shop that was kind enough to sell me some chain lube, as well as some new handlebar tape (the old one finally worked its way loose and tore down the middle during the hot rides of the previous two days). The new stuff has gel pads underneath so maybe my hands won't get numb as quickly. Plus, as a bonus, they adjusted my brakes and pumped up the tires, which is good because tomorrow I have to climb Tiger Mountain, which will make today's climb look like a walk up a flight of stairs.