Bear Creek Campground to Lake Quinault Campground, Washington
Miles: 86
Terrain: Varied, some climbs, mostly forest, 11 miles of beach
Weather: Sunny and warm, except for the beach which was overcast and cold

For the first night of actual camping, I slept fairly well. The site was isolated, and close to the road (behind a line of trees), but traffic sounds didn't bother me too much. The main problem was just trying to stay on the air mattress and feeling squeezed in the sleeping bag. My legs were quite sore from all the constant riding, and so they wanted to move around a lot, but couldn't. However, there wasn't any cramping or anything like that.

Here's a pic of the campsite, by the way. There's a fire pit to the left which I didn't use. Otherwise, this is it. The place was ringed with trees and vegetation except for the narrow path coming in. Plus, it was free. Yay, free! 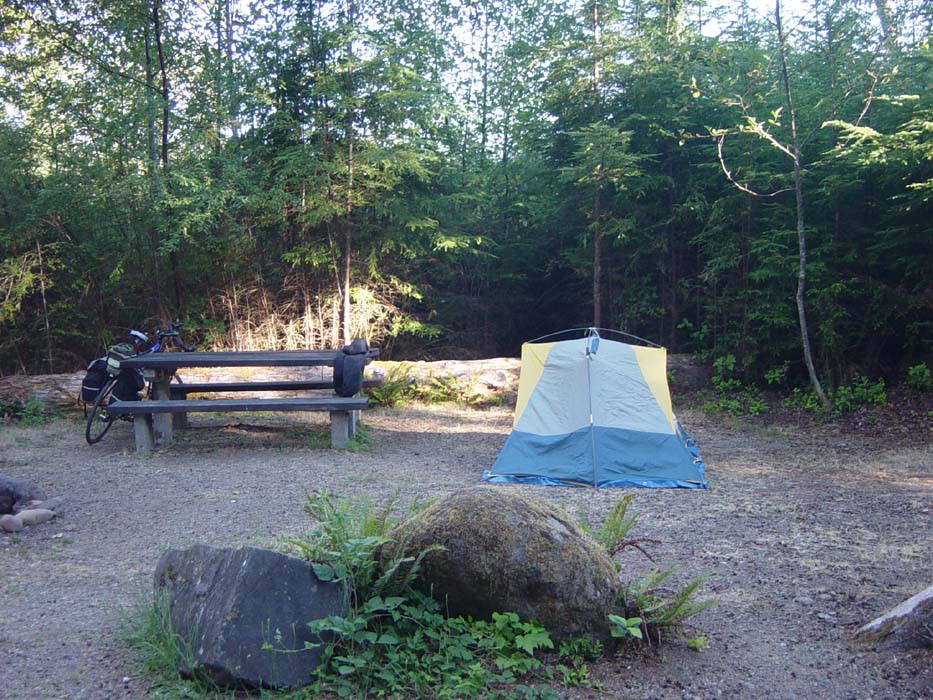 The diner nearby had wireless, so I was able to upload yesterday's report while I had breakfast. Normally I don't eat in the morning, but I was hungry. Usually I eat late (say, 10pm) then stay up until after midnight. There wasn't any point to that yesterday since there was nothing to do, sitting in the dark with no electricity, so I just went to bed at about 10. That threw off my food schedule making me hungry by morning. There were pancakes on the menu, but I decided to get French toast instead, which it turns out was good because the pancakes were monstrous. A couple sitting nearby had ordered 2 each and couldn't even eat half of their orders. I'm sure I would've made the same mistake. The place wasn't called the Hungry Bear Cafe for nothing, I guess.

As I was getting ready to leave, a couple rode up on a tandem touring bike and we swapped horror stories of the climbs from yesterday. They were heading to the Hoh Rainforest about 40 miles away and had been riding all morning (since sunup). I didn't actually leave until after 10am, because I figured on getting to the beach and camping there about 50 miles away, so I was in no hurry. They rode on, and I bumped into them again several times later in the day. They were the 3rd couple I'd seen touring in my direction (plus at least a dozen riders going the other way) but the first one on a tandem. Bicycling this route is popular, apparently.

Anyway, once I got started it was mostly forest for a while. Here's a shot of one area where they actually showed the planting and harvesting schedule for timber. The sign tells you when the next cutting will be. They plan ahead. 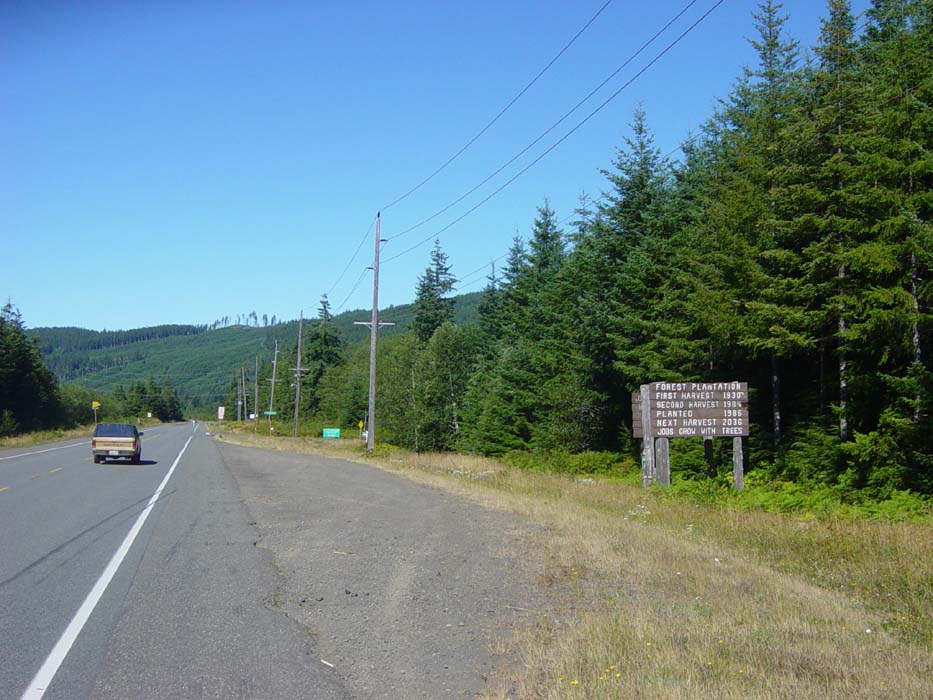 12 miles down the road I came to Forks, which any fan of the "Twilight" books and movies will recognize immediately. I didn't really like the first film all that much so it wasn't a big deal to me, but my sister gets into that stuff so I took a few pictures for her. Primarily to rub it in her face that I was in Forks and she wasn't. :) Anyway, this first one is whited out because the sun was right over the sign, but at least one of the swarming tourists was kind enough to take the shot. The town was full of pilgrims come to visit "Twilight Town." 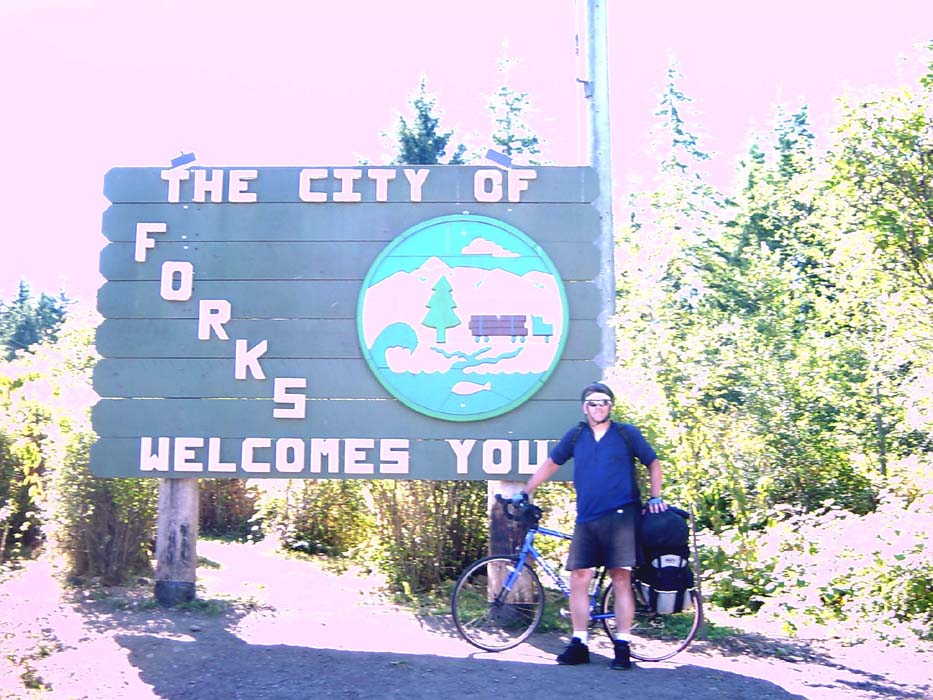 They might be the home of all things Twilight, but they need better proofreaders for their signs. (Spot the mistake!) 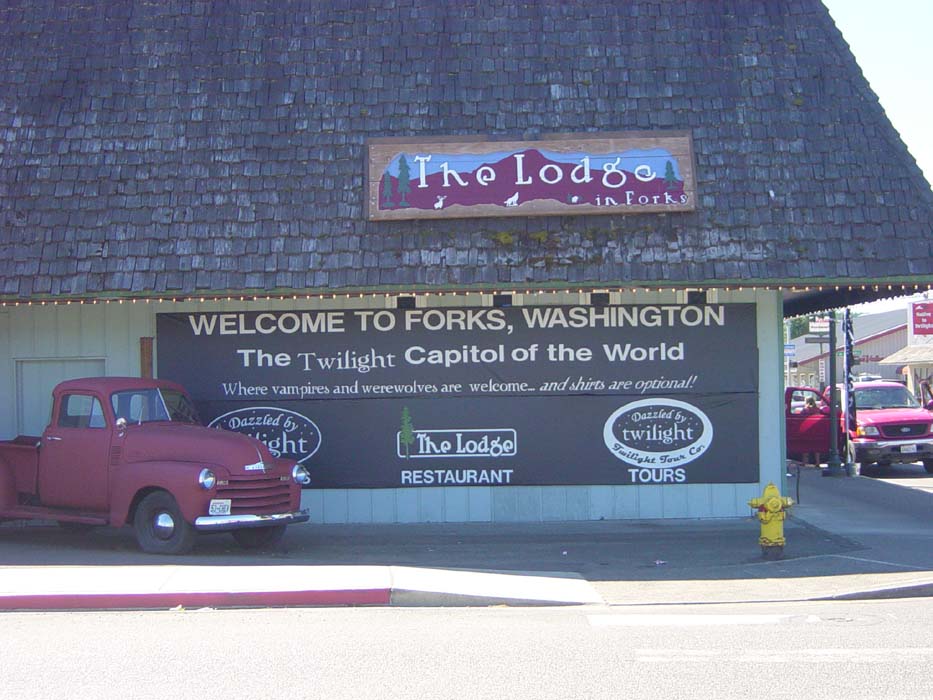 The road I've been riding on, apparently, has some historical significance, which I could appreciate. 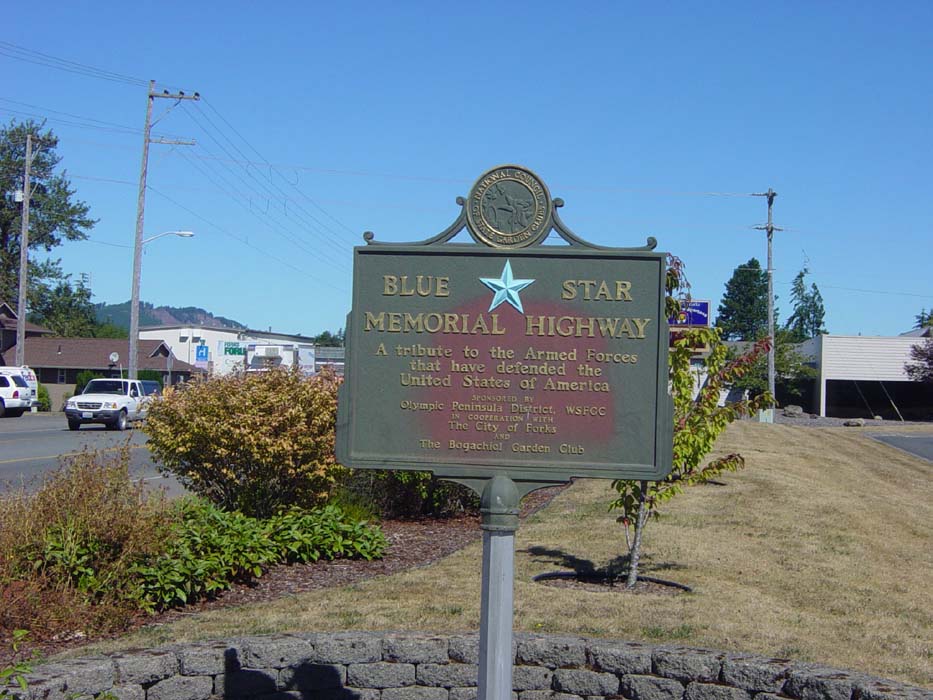 Apparently this is the truck the main character in the book drives around. This visitor information shack was full of Twilight fans, so much that I could barely get a free moment to take this picture. 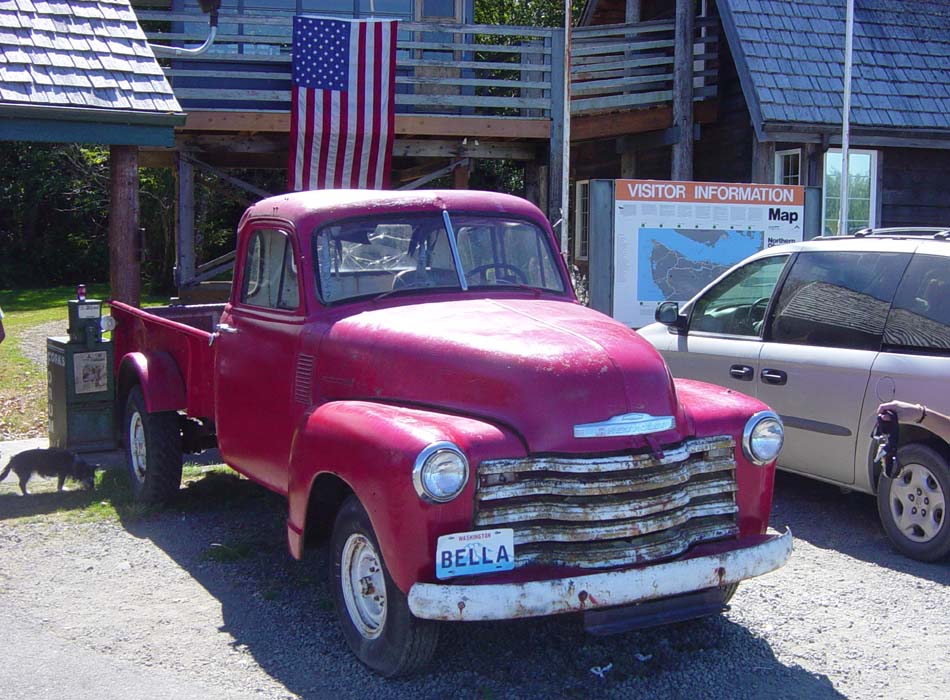 Before leaving I got a couple souvenirs for my sister and then got the heck out of there. I really feel sorry for the people living there, honestly. They're overrun with tourists on a daily basis. There was even a tour bus painted black with the movie logo on it and the name "Twilight Tours." How would you like it if your home town suddenly became a tourist destination? The population of the place was less than 4,000. I think it would drive me nuts.

So enough of Forks, back to the scenery! 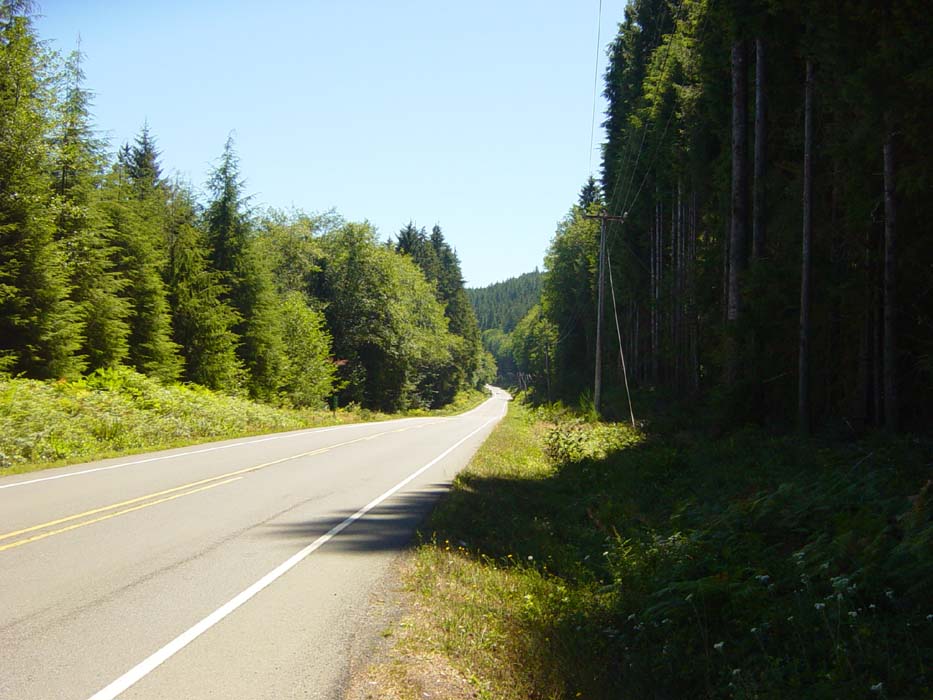 These pictures were of the Olympic National Forest, on my way to the beach. 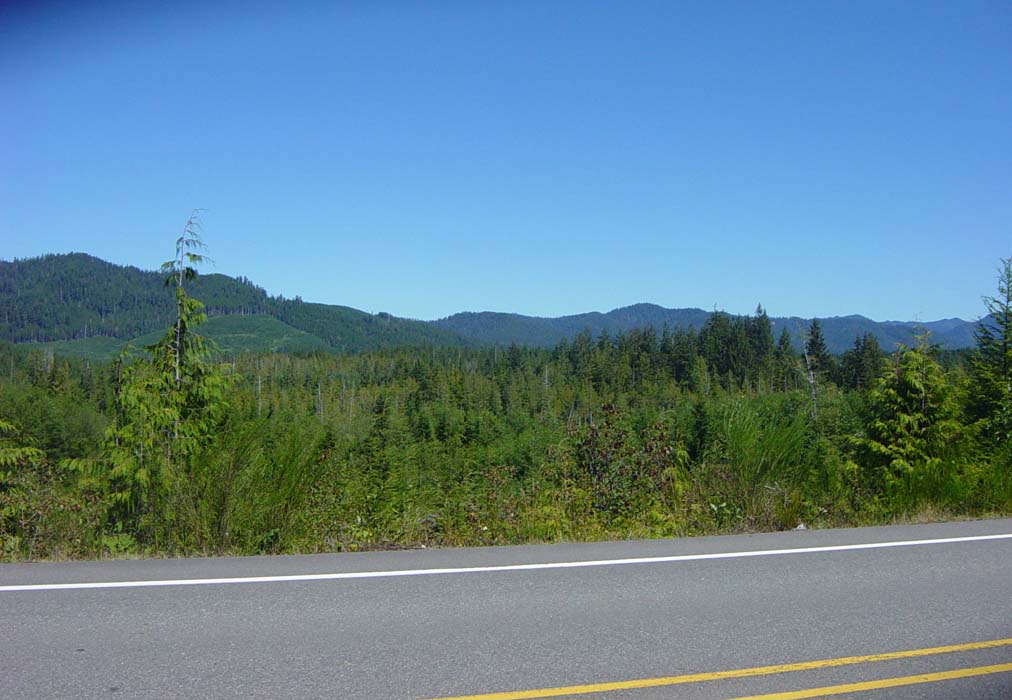 The Olympic Mountains are in the background pretty much all the way along here. 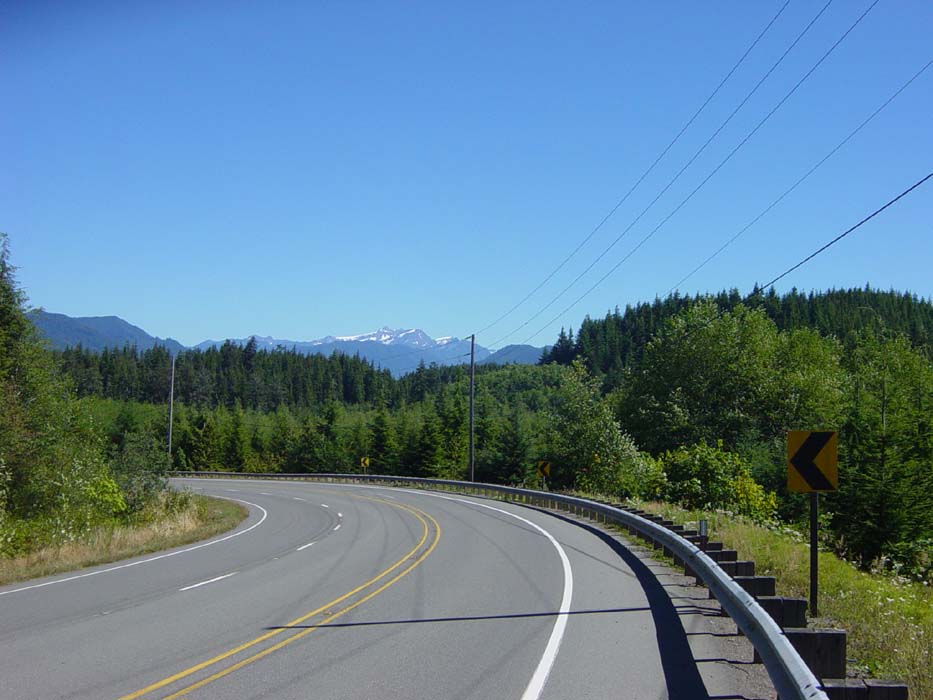 The Hoh River. Most of the river crossings I made were on narrow bridges making it impossible to stop for pics. This was one of the few with a nice wide shoulder. 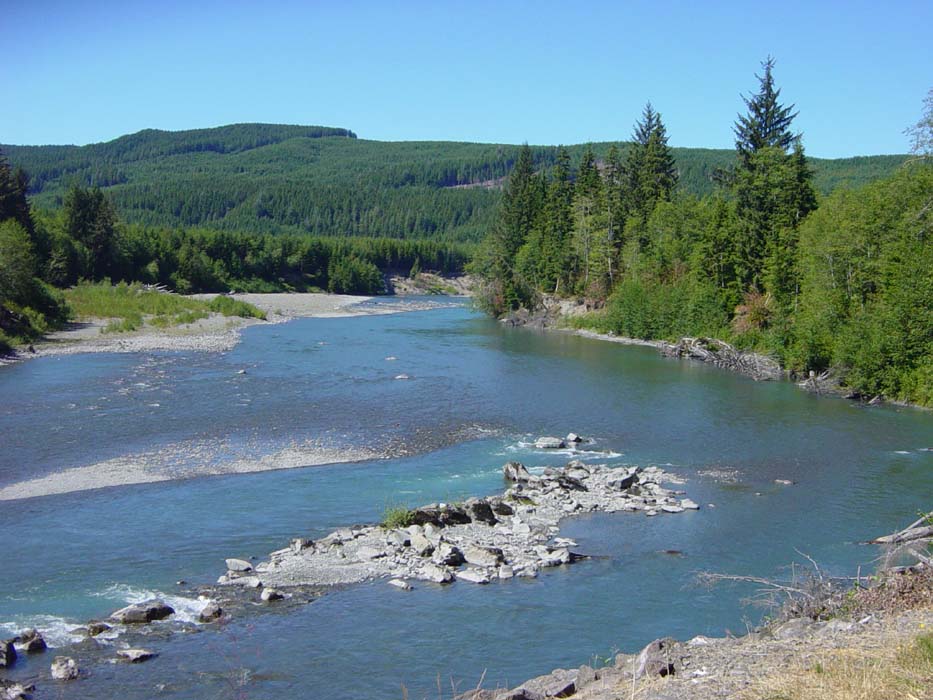 Sometimes the trees were sparse and well away from the road, other times they crowded in, like right here. I actually passed through several types of forest, with an actual rainforest only about 10 miles away (but not the direction I was headed). Notice in this shot that there's a faint line of mist crossing over the tops of the trees ahead. This is cloud cover over the beach a few miles away. What I didn't realize was that this low lying fog also signaled a huge temperature drop. In the space of a few miles, it went from mid-70s to mid-50s. Good thing I had on a long sleeve jersey with my sleeves rolled up (see the Forks sign photo above). 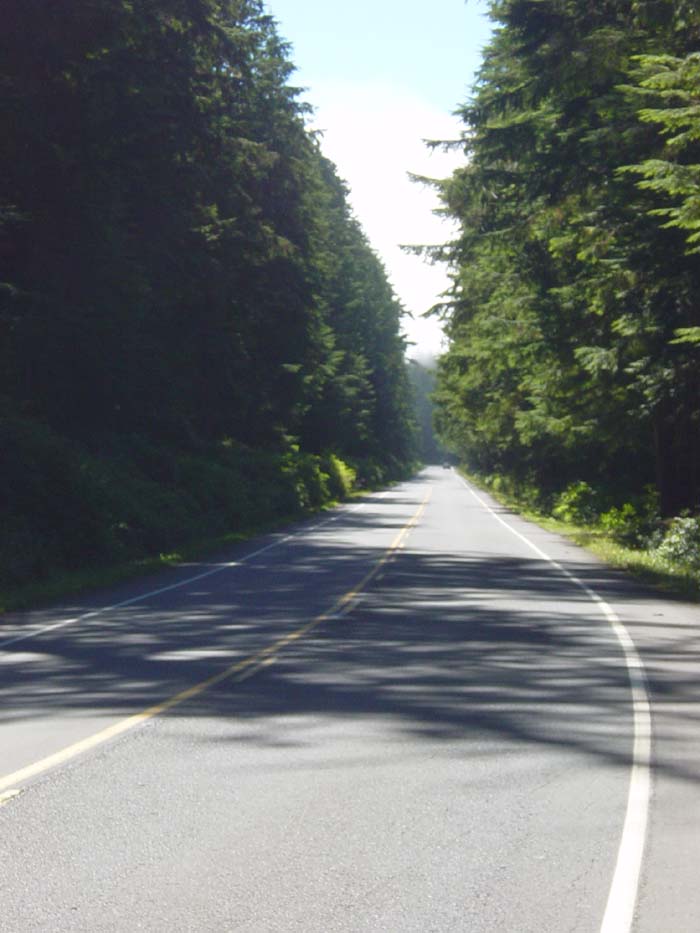 Now, the beach! Yes, that's it down there through the gap in the trees. You can hardly tell with all the fog, but it's there. This is the actual Pacific Ocean, not Puget Sound or the Strait of San Juan de Fuca, it's the real ocean, finally. 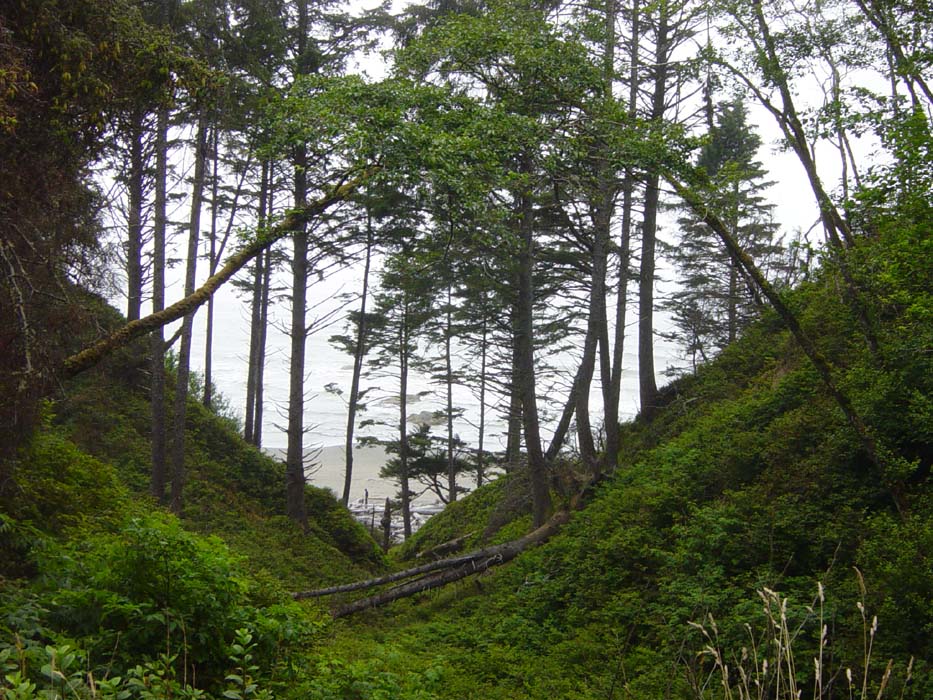 Stopped at an overlook point and took this picture down over the cliffs, which was quite a steep dropoff. 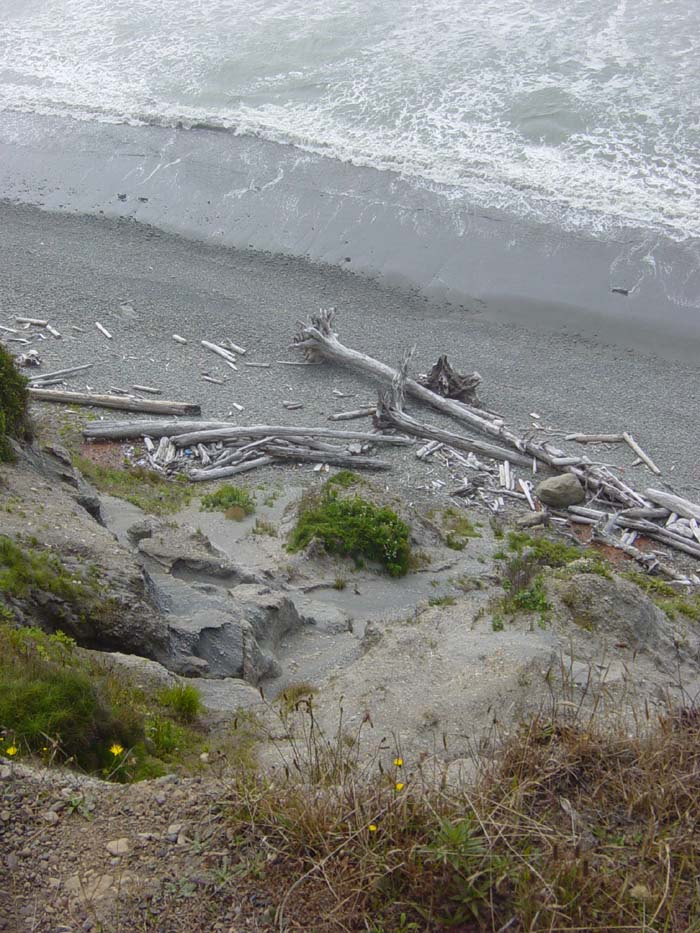 This would've looked a lot better if the sun wasn't covered up by those darn clouds... 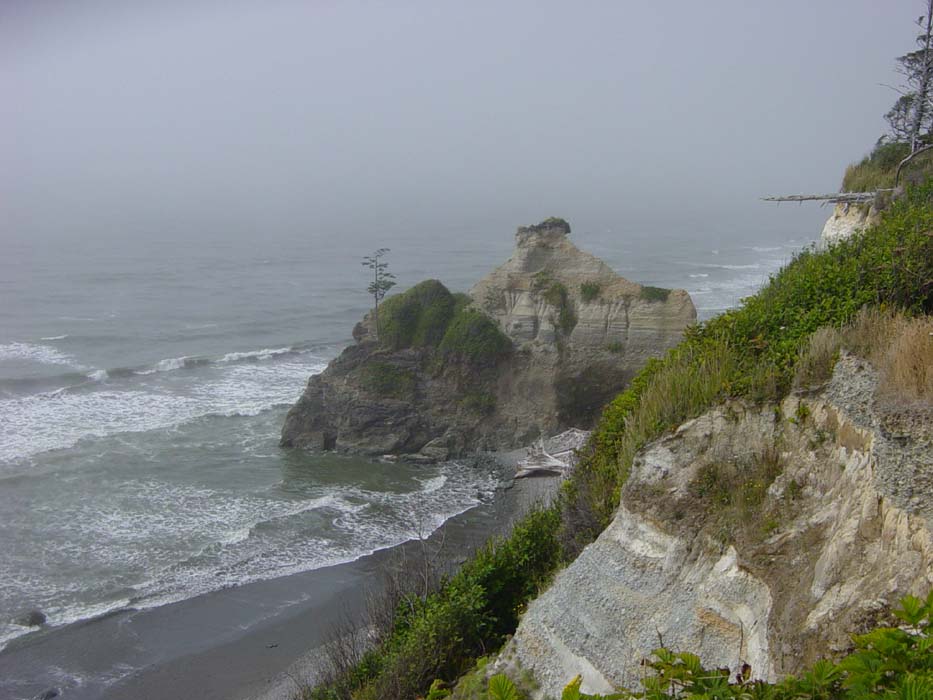 This is another of those signs you wouldn't see back in Ohio. At least, I'd hope not. 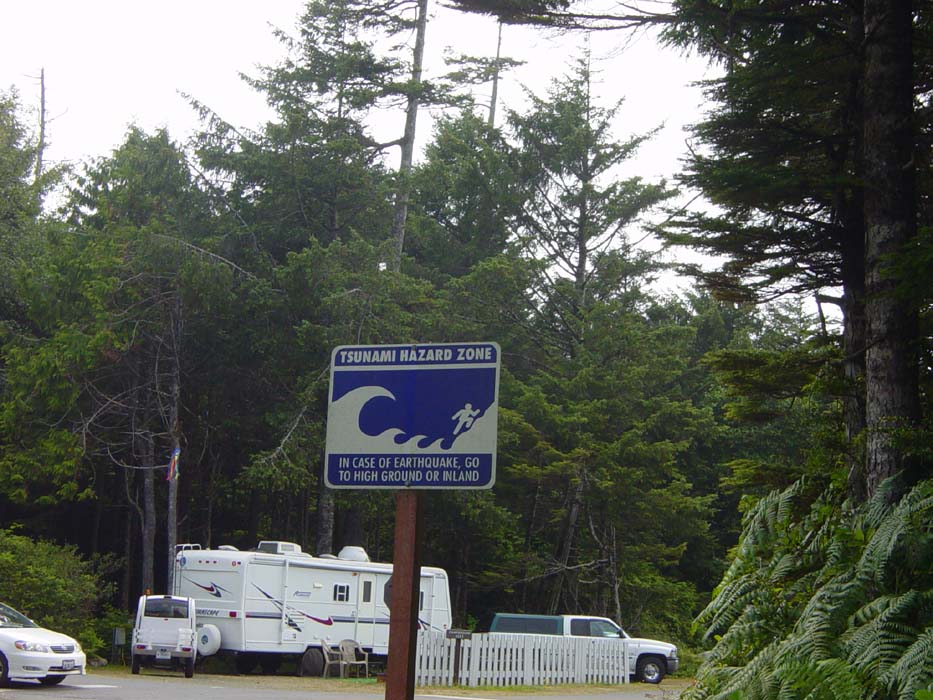 That was actually the campsite I'd intended to use tonight, but it was so c-c-cold, I didn't want to stay. Plus, it was only about 3 pm. There was more camping about 35 miles ahead, so I headed out of there, shivering all the way. Here's one last photo of a river I passed over, which again would've looked much better without all the fog. 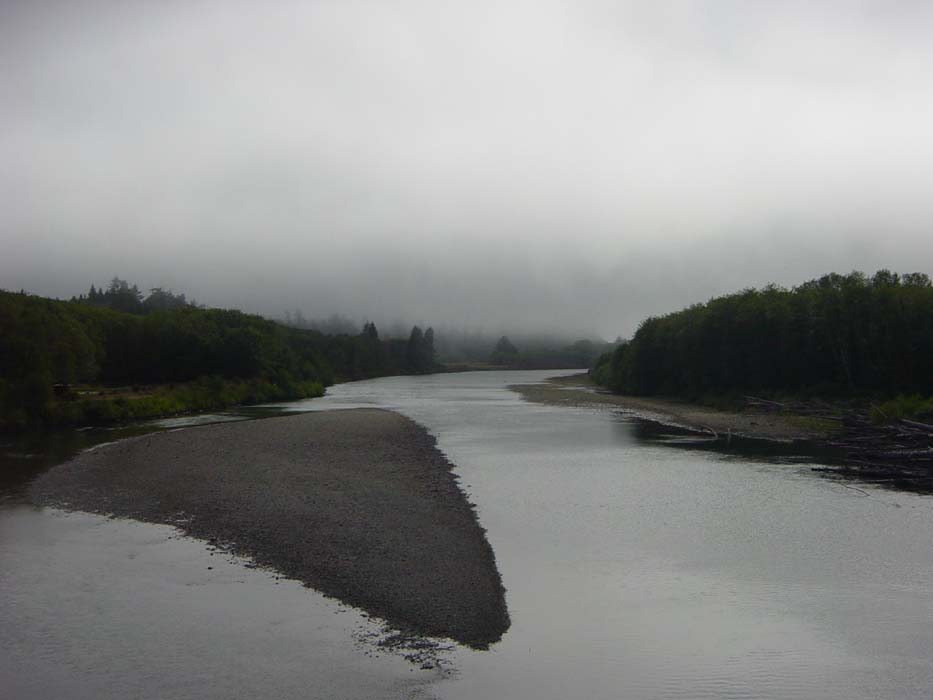 At last, sunny skies and warmth! Here's an area where they had done some logging recently, leaving a row of trees untouched behind the devastated remnants of what had been cut down. Don't worry, like I showed earlier on, they practice replanting techniques around here and trees are a completely renewable resource. 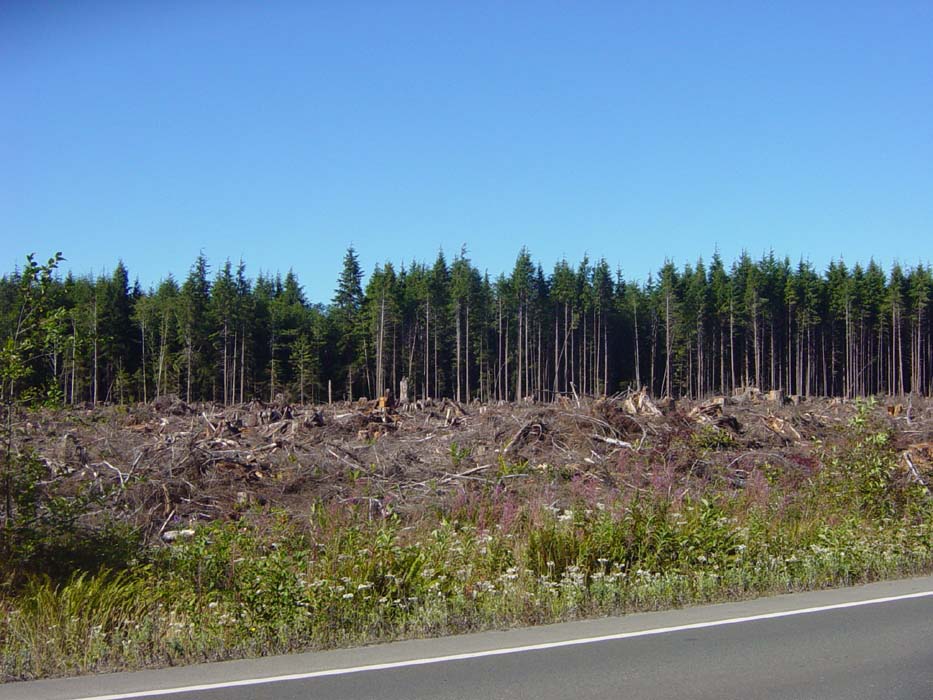 Another view of the road ahead, which by this point was mostly flat and enjoyable....for the moment. 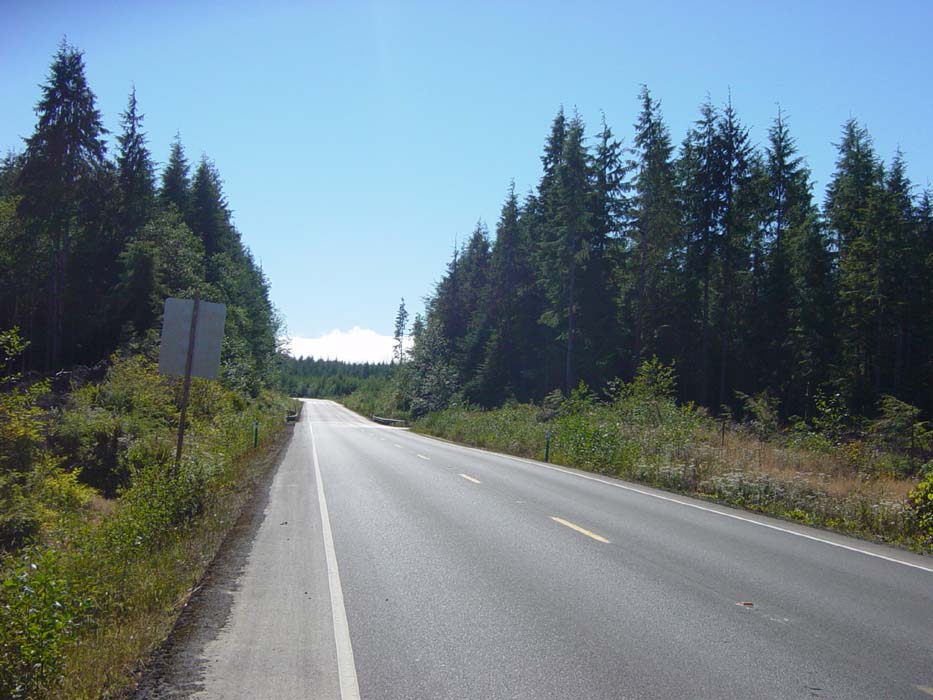 Now, several times earlier today I'd come across stretches of road 4 or 5 miles long where the surface wasn't smooth asphalt but some kind of gravel/tar mix that made riding uncomfortable and I'm sure didn't do anything for my tires. Well, now I came to a spot where they were ruining perfectly good road by putting this crap down. Except for brief stretches with clear shoulders like this here, the entire road was like this for over 10 miles. You can see the fresh tar and oil that completely covered my tires and made gravel stick and fly around with every pedal stroke. 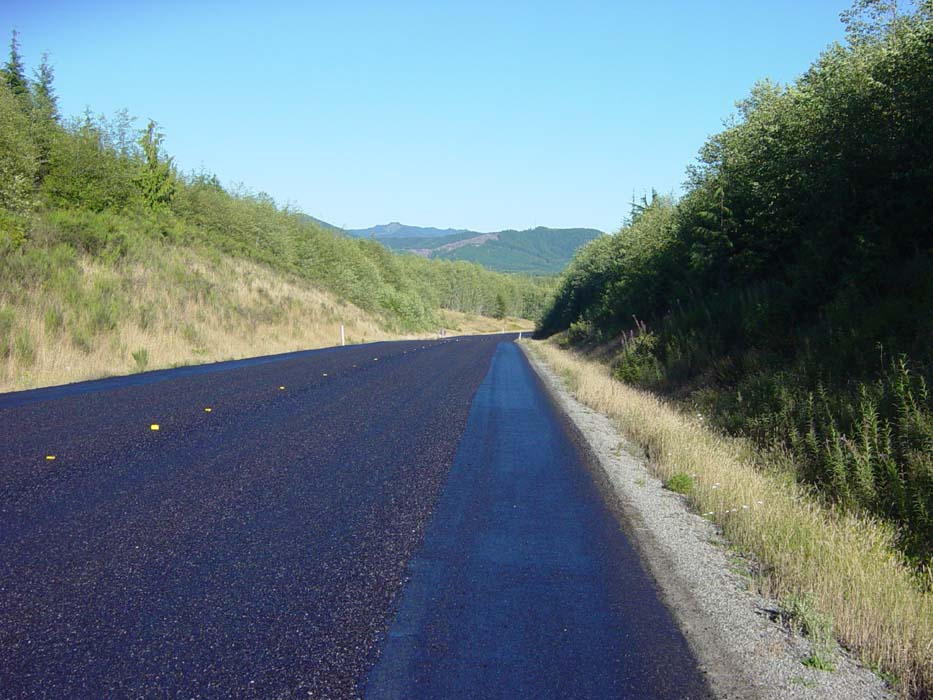 A close up of this crap so you can see what I'm talking about. I even asked one of the construction guys why they were destroying the road by covering it with chunky gravel, but he had no idea. "What the state wants, the state gets," he said. Well, state of Washington, your idea of road repairs sucks. 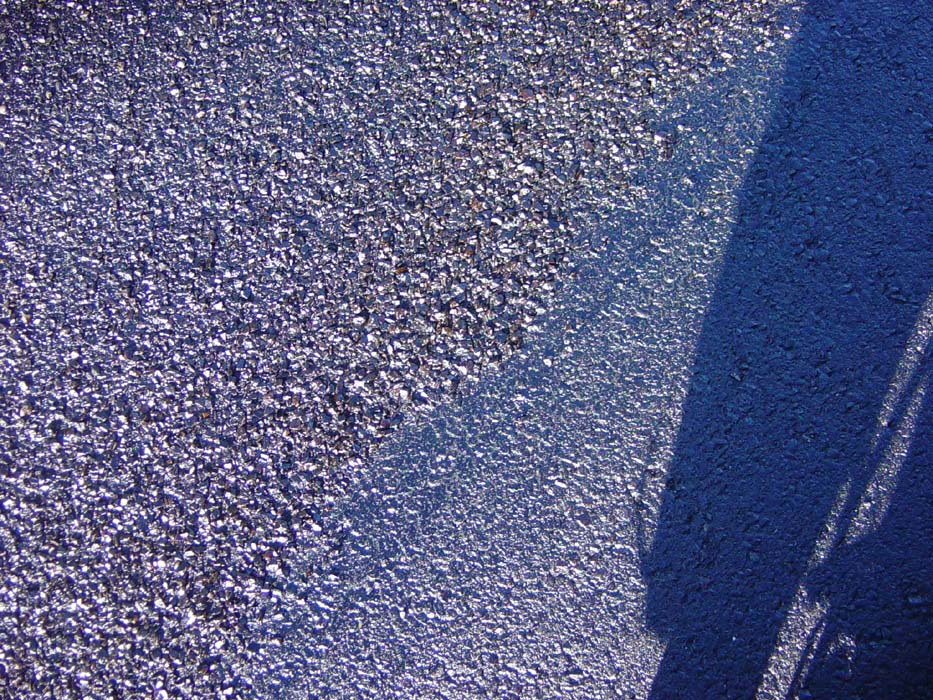 Anyway, 10 miles later, I came to a spot where the road was down to only one lane and I had to wait with a bunch of traffic to be waved through. Of course the cars went well ahead, forcing me to race as fast as I could so the next group could go. I don't think they were very happy with me, but I couldn't very well ride on the restricted side, and there was no shoulder. Ah well, it was all worth it, I got to see more of this: 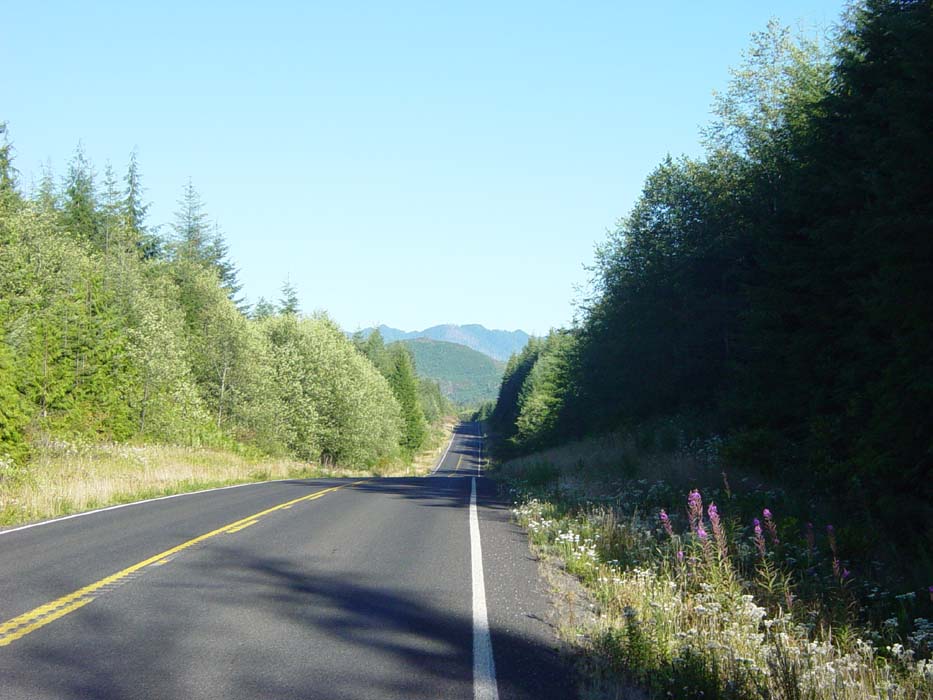 Since I keep showing pictures of the road ahead, I thought I'd include one of what's right next to me. The wildflowers everywhere made the ride colorful and the air smelled great (now that there was no more oil and tar). 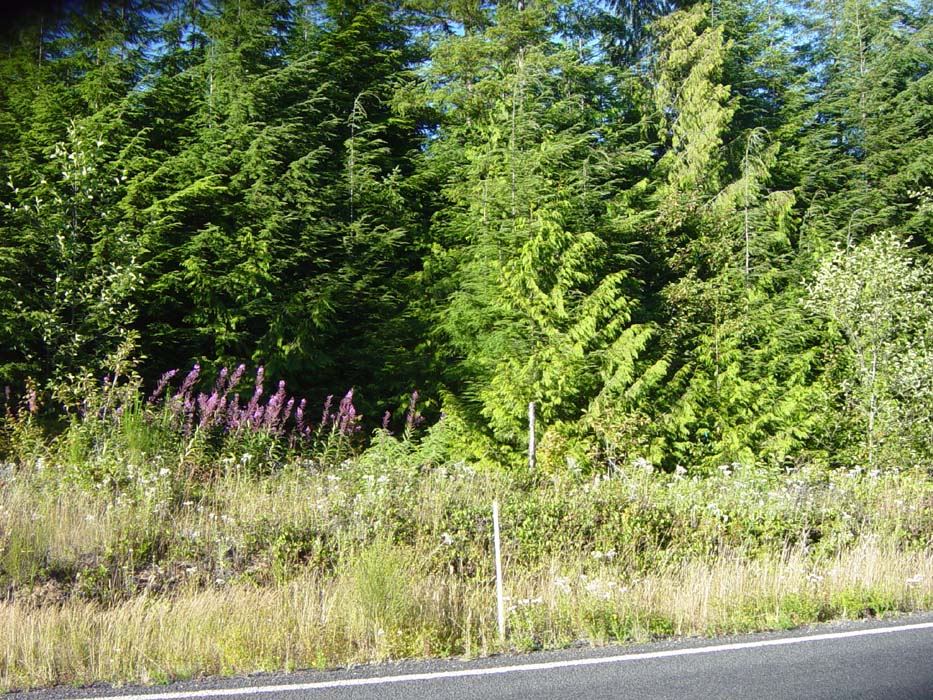 Eventually, I made it to Lake Quinault where the camping was. And what's this, an actual hotel? Yep, it's one of those little cheap places I like to stay in when touring, the kind with no frills and low prices. Or at least you'd think so. Take a guess what the rate was for a single in this tiny little motel. Go on, guess. I'll tell you after the picture. 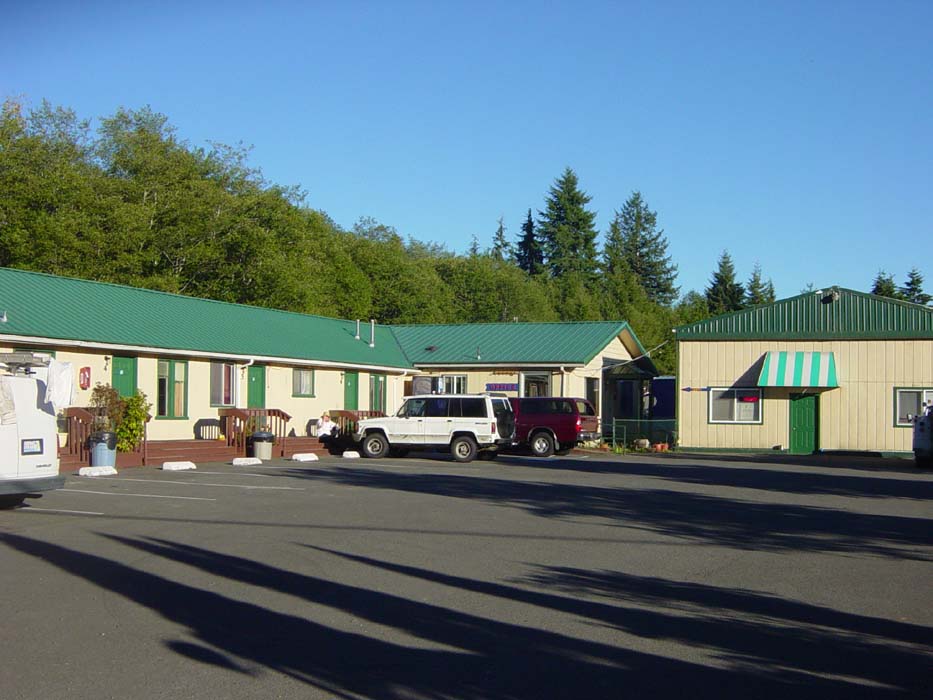 Answer: $77 before tax. I rode on. Clearly these people are nuts, so I'll just go camping. With the lake to the left, and campsites just ahead, I got back on the road. 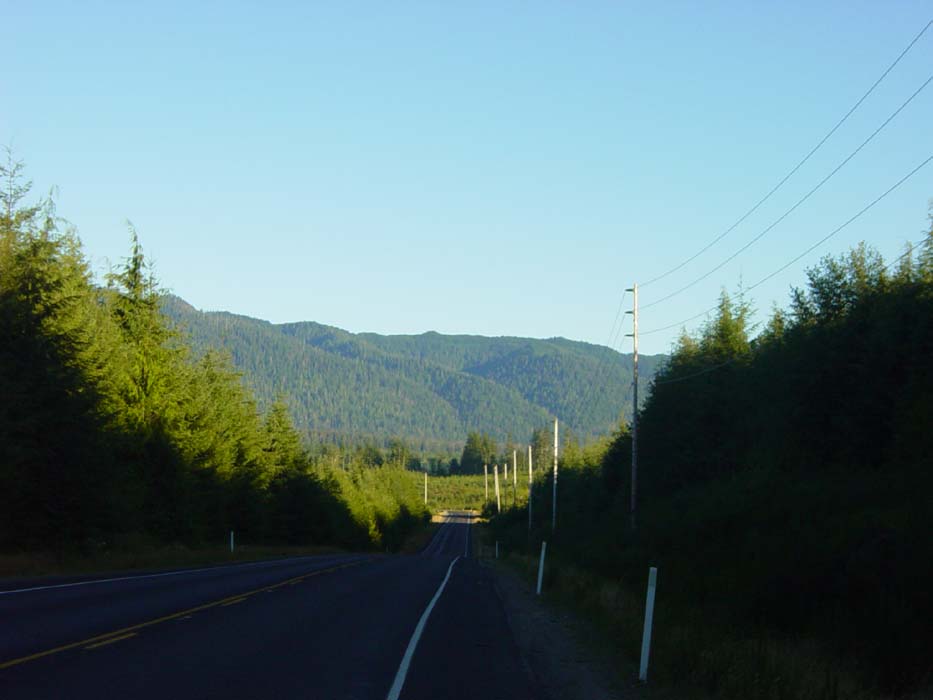 And here's the lake, which was magnificent. This picture doesn't even do this view justice. 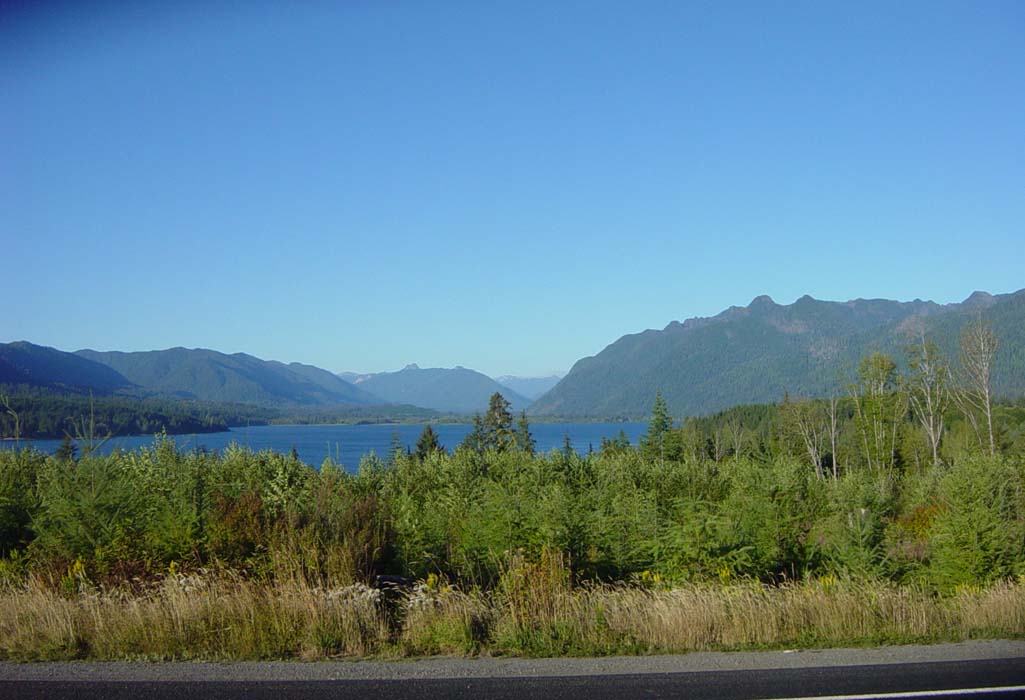 Hmm, I was sure this was the right place. Okay, moving on again. At least they pay attention to bicyclists around here. 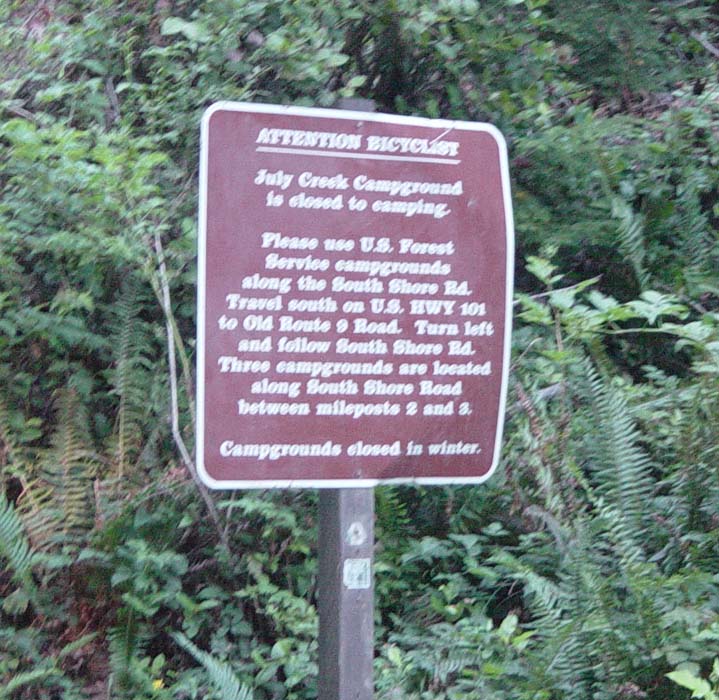 Hmm, I wonder if they have any amenities this way? 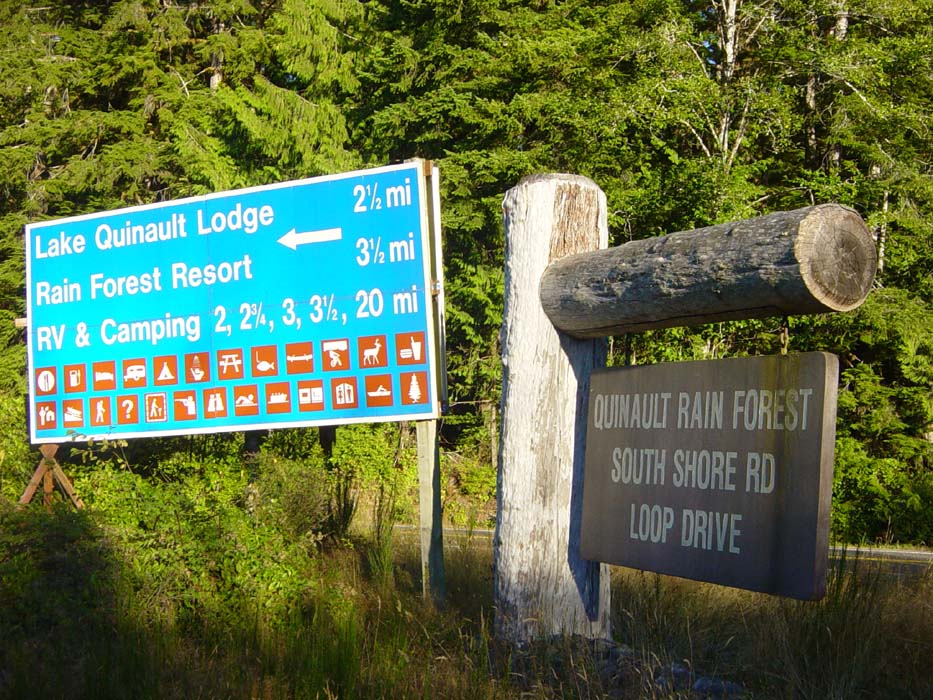 A couple miles down the road, there was the campsite off to the left. I got the second to last site in the place, as it turns out. There were lots of people here, and restrooms too. Camping was $20 for the night. I paid gladly, and the sun set on another cycling day. 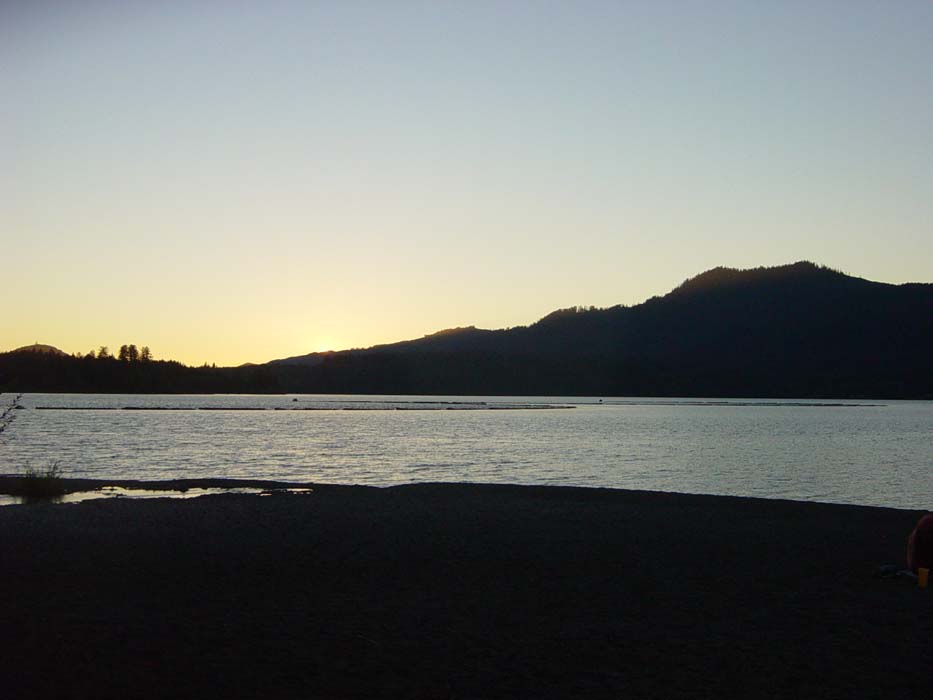