Lake Quinault Campground to Aberdeen, Washington
Miles: 54
Terrain: Mostly flat, a couple of climbs, nothing bad
Weather: Cloudy and cool, nice tailwinds most of the time

This time, I tried unzipping the sleeping bag and using it like a big blanket, so my legs could stretch out a bit more. This worked well, except the air mattress let the cold in underneath me. I woke up about 7am rolling around trying to find a comfortable spot, and wound up getting wrapped in the sleeping bag anyway. Then it was back to sleep for another hour or two.

I was in no hurry today as it was expected to be a short day with nothing difficult on the road ahead. This was mostly true, except the road was 40+ miles of that awful gravel/tar crap I mentioned yesterday. Fortunately, about 20 miles in, the shoulder opened up and was smooth the rest of the way, just cluttered with gravel and other junk. The irony is, you can actually see the perfectly fine smooth pavement underneath this horrible stuff they put down. It's like they wanted to ruin the roads.

Anyway, on to today's pictures. First off, here is my secluded campsite (surrounded by other campsites, you just can't see them through the trees). My tent is practicing the art of not being seen. 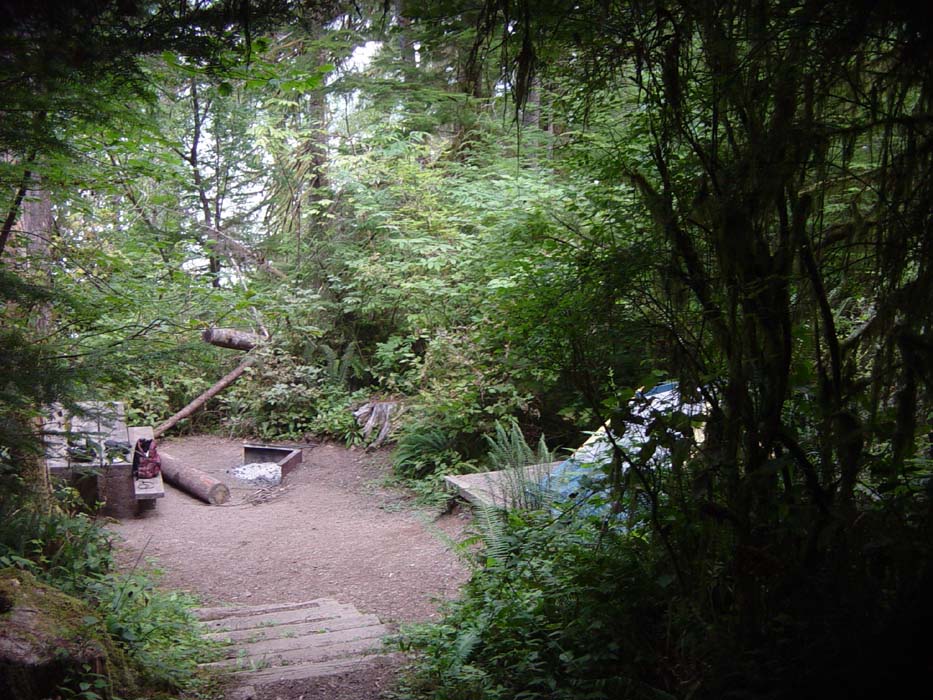 After spending about 2 hours managing this website (there were a ton of pictures yesterday and I didn't have a chance to do anything with the site until this morning), I finally got everything uploaded after breakfast. While sitting there in the diner, I learned from passersby that there was some kind of giant tree a couple miles down the road. So, before going back to the campsite to finish putting everything away, I headed down to check it out. Here you go, the world's largest spruce tree! 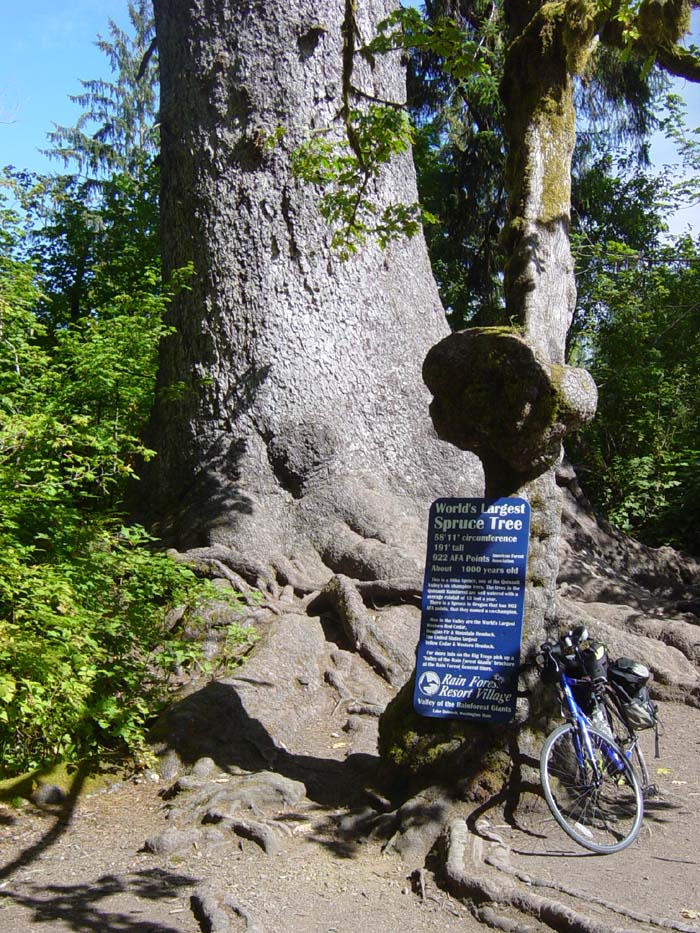 Here's another shot that gives you a better idea of the size of this monstrosity. 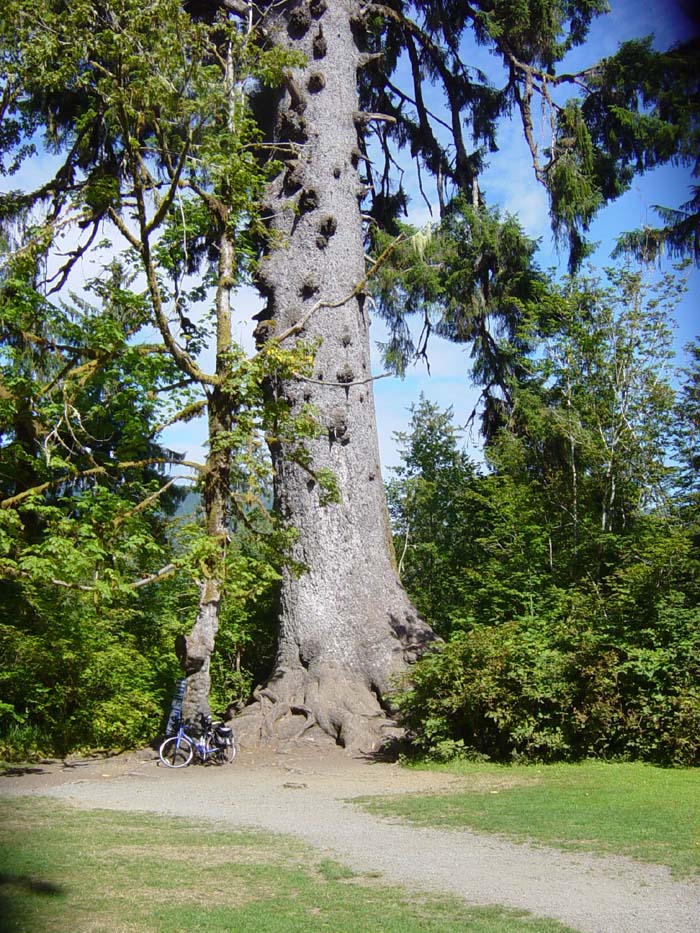 And another. Apparently the rainfall and climate here make for a lot of giant trees, as the sign mentions several other "world's largest" in the same area. 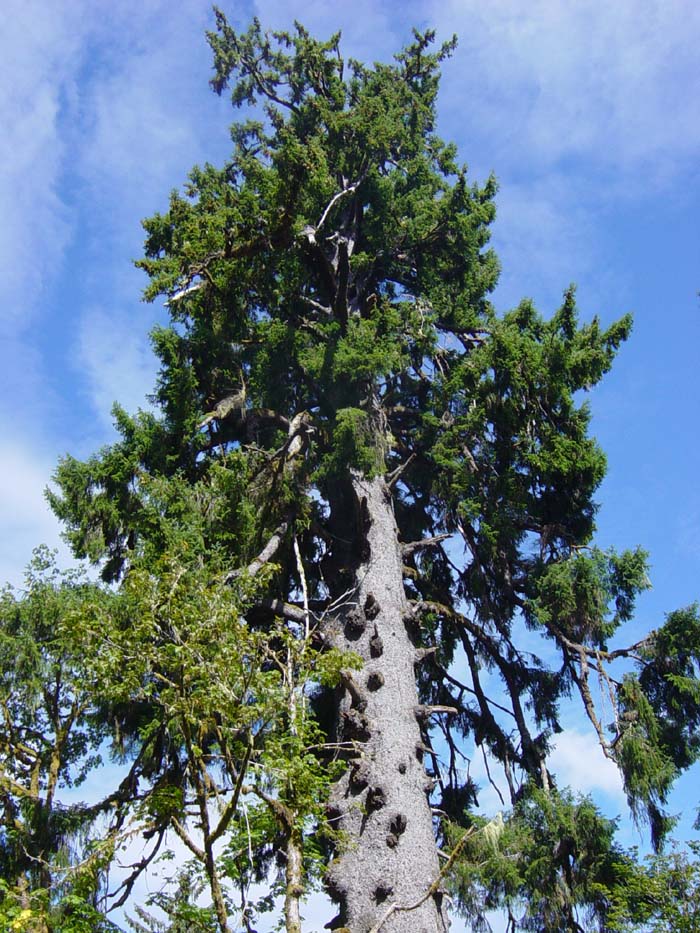 So sometime around noon I finally got out of there and proceeded on down the road, which climbed for a bit and then spent much of the day flat and winding. There were a couple more hills, but nothing bad. There also wasn't much in the way of civilization. This picture here is one of the last before leaving the Olympic National Forest. Note the crappy road surface covering even the shoulder so I had nowhere to ride except the center of the lane, where it was smoothed out by years of trucks. (Don't worry, there was hardly any traffic going this way.) 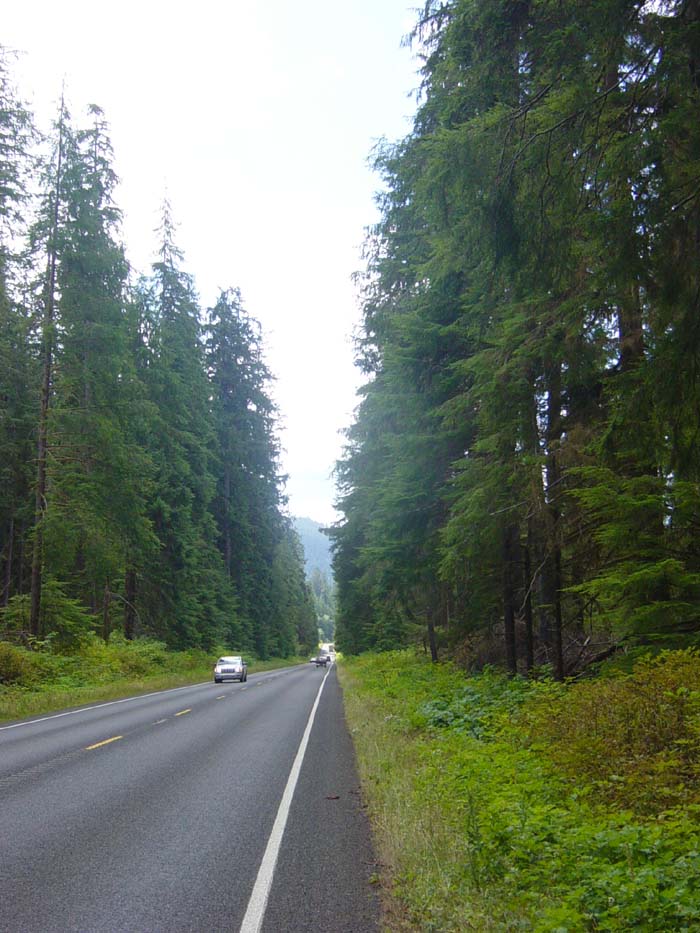 After that, the trees got a bit more spread out. Also, at this point the shoulder has widened and the ground is smoother. You can tell the entire road used to be this way, but for some inexplicable reason the morons covered it over with gravel crap. Oh, sorry, did I say that already? Yeah, it was that annoying. 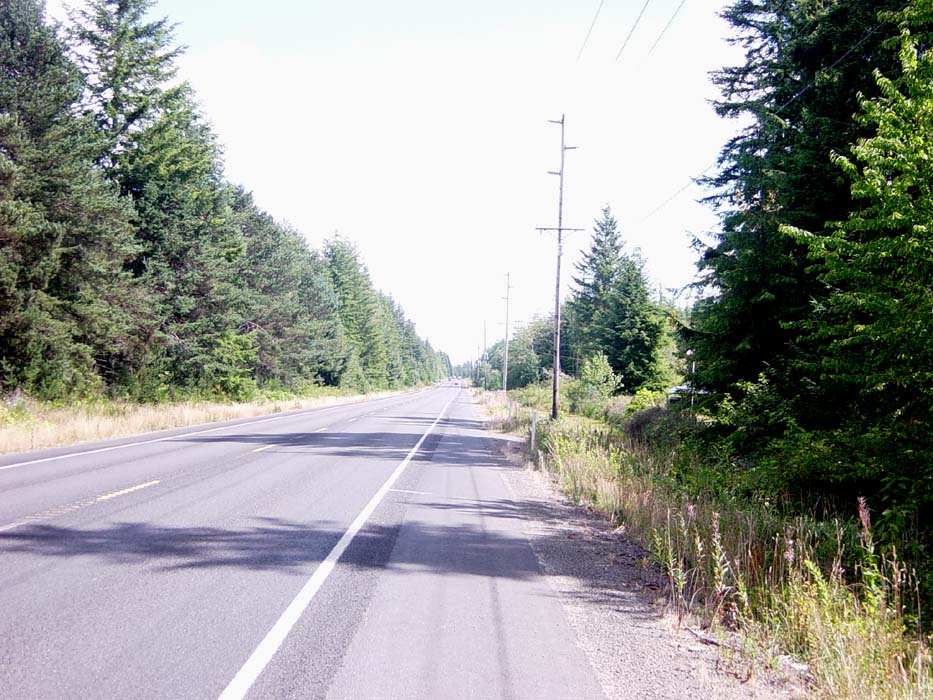 For the vast majority of the ride today, the terrain looked just like that previous picture, with no sign of civilization whatsoever. The only time I really saw anyone was in the tiny town of Humptulips (no I am not making up that name, it's on the map, go look if you don't believe me). Here, I ran into a cycling couple from Canada who were heading down the coast, same as I was. They were older, and had planned to go to the coast and take a ferry across the bay there, but found out in town that it wasn't running any more. They also mentioned they had done lots of touring, including a ride from Bangkok to Paris. I tried to wrap my mind around that one for a while, and couldn't.

Anyway, I left them behind (they were eating lunch and I wasn't that hungry) and pressed on, heading through logging territory and getting passed every few minutes by one of these. By the way, I took this picture while still riding, not bothering to stop, so that should show you how wide and safe these shoulders are. 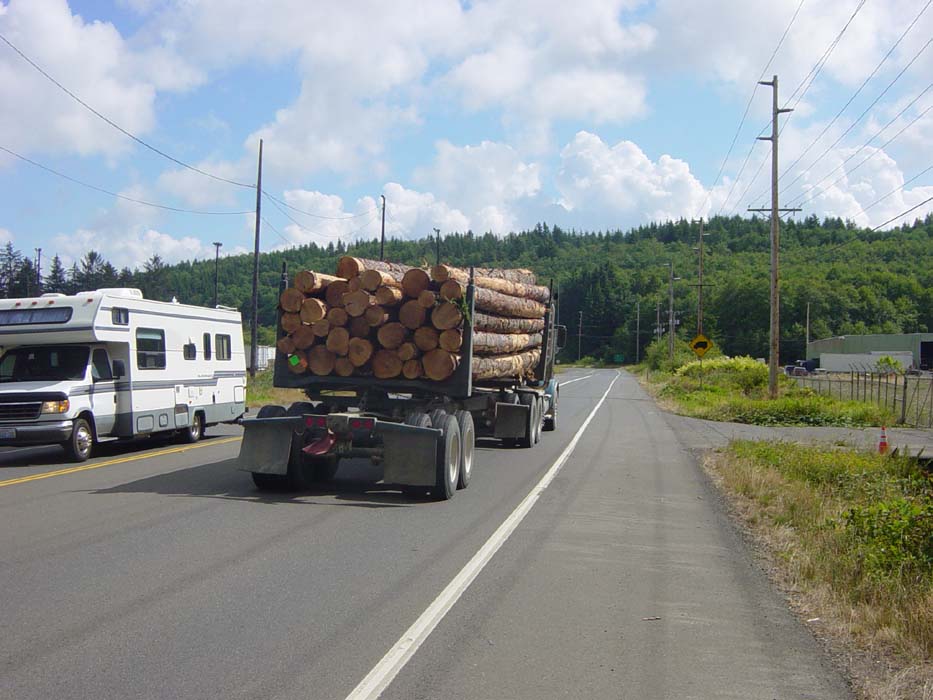 Finally approaching civilization, I stopped to get this picture of the Hoquiam River. 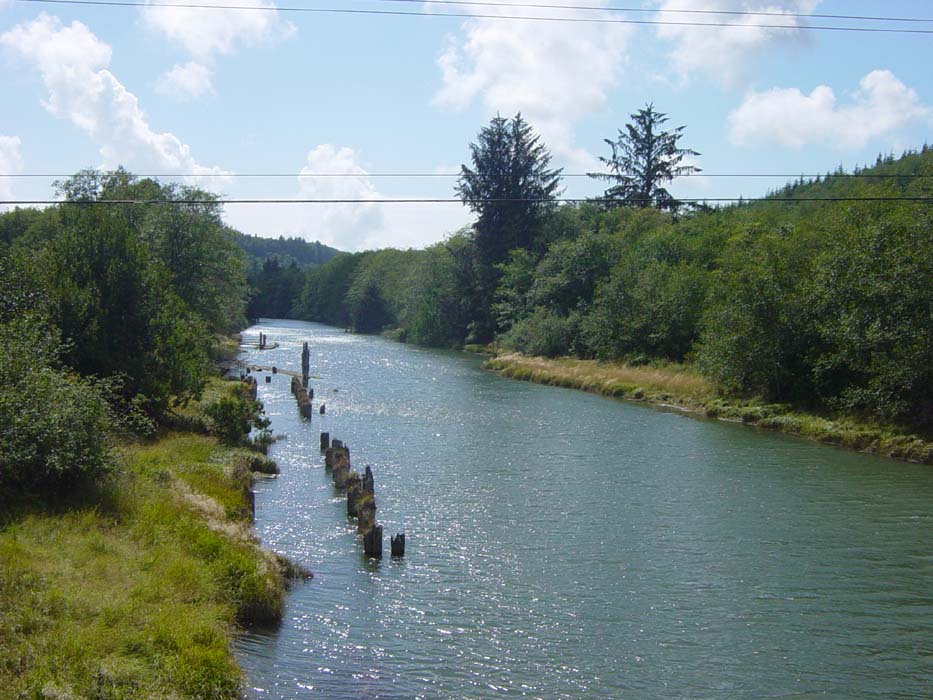 Speaking of Hoquiam, this is the town where I began my long cycling trip across the country many years ago. In fact, I'm pretty sure this spot pictured below is the exact place where I dipped my tires in the water before taking off. If this isn't the precise location, though, it was pretty close to here. 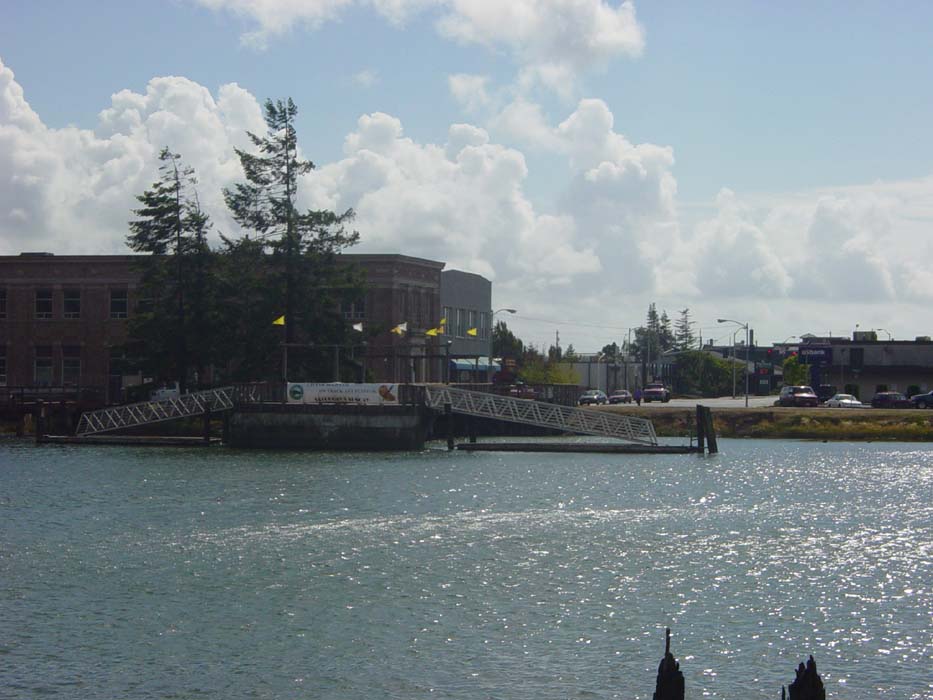 Upon reaching town I rode around for a bit looking for hotels (I got here with plenty of daylight left) and finally settled on a cheap one ($45 a night, cheapest I've seen so far, but I hadn't had a shower since Port Angeles, so I wasn't being picky). Since I was so early, I rode around looking at the town, and wound up at Grays Harbor, where I took this shot of the sun coming down over the bay: 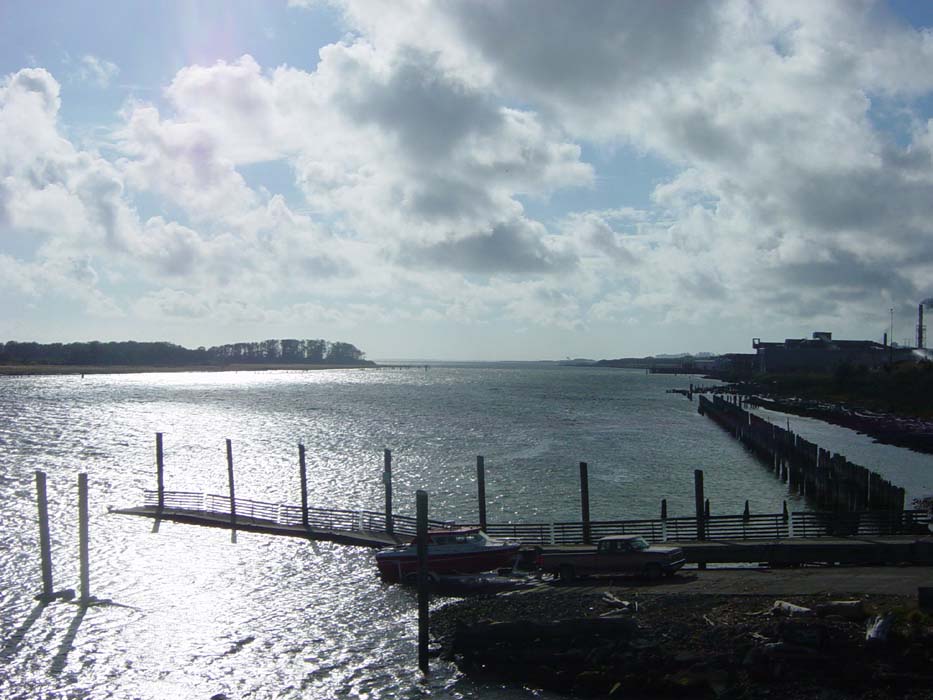 Here's another view just to the left of that previous one. 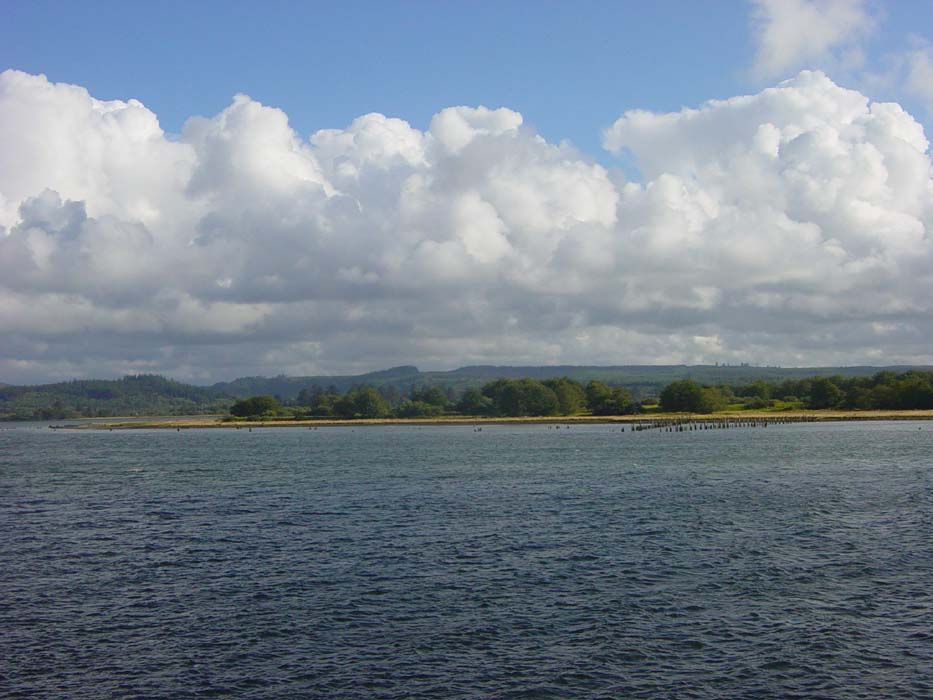 My bike enjoyed the view as well. 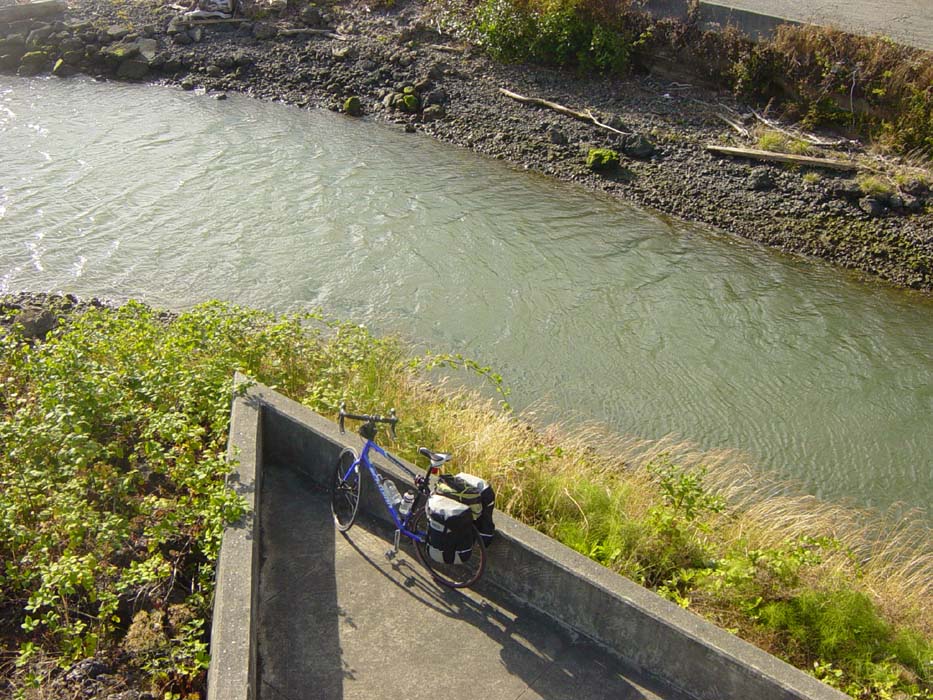 And that's all for today. I probably could've gone further, but I want to spend a day making a loop around the penninsula west of me, to Westport and points south along the coast. If I pressed on, I would miss that opportunity. Besides, it's nice to have an early day for a change and a chance to just sit back and relax.

Also, today I closed the book on the Olympic penninsula and press on with the main body of the Pacific Coast tour. From this point on, except for a few brief trips inland, I should be on or near the beach most of the time.