Ah, a night in hotel felt great after two days of camping. Actually the best thing was being able to actually take a shower. Now, if I could just get some laundry done, everything would be perfect. The cheap little hotel I chose last night (after searching around a while) didn't have laundry...the only hotel that did cost over $35 more for a night's stay. I can wait until my next off day if necessary.

Anyway, this was one of those days when I had a couple of choices of where to go next. I could've just headed straight down Route 101 due south and wound up near the Oregon border somewhere, but since this is supposed to be a sightseeing trip, I decided instead to head out and ride around the beach. Basically, there's a road called Route 105 that heads out and makes what they call the "Coastal Loop" all the way around, arriving back at 101 in the little town of Raymond (which, of course, everybody loves). (Sorry, couldn't resist.) This route would take about 60 miles to go what would've been only about 25 as the crow flies. However, that would've been far too boring, so off to the coast I went.

The ride to Westport, on the northwest coast of the Loop, was fairly uneventful, if a bit windy. There was this one spot where I crossed over some tidal flats that were perfect for oyster farming. You can see some of the crates for collecting them down by the water's edge. 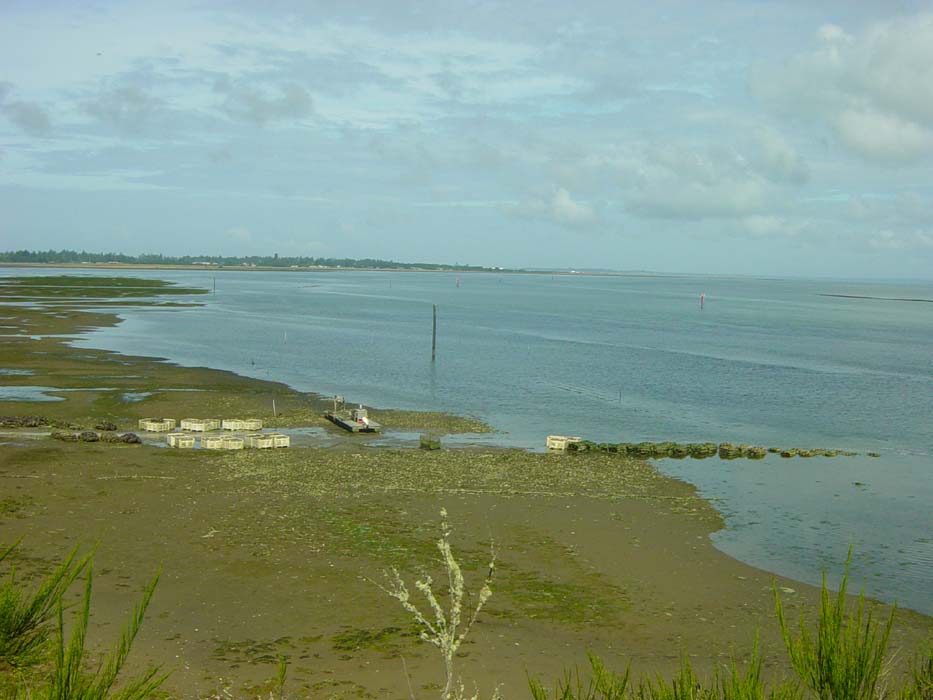 There wasn't much else to see until I got to Westport, which is a scenic little harbor town with a nice waterfront lined with shops, restaurants and markets. Many of the docks themselves had businesses, including one that was weighing and selling freshly caught fish and other seafood by the pound. This picture was taken from an observation platform close by. 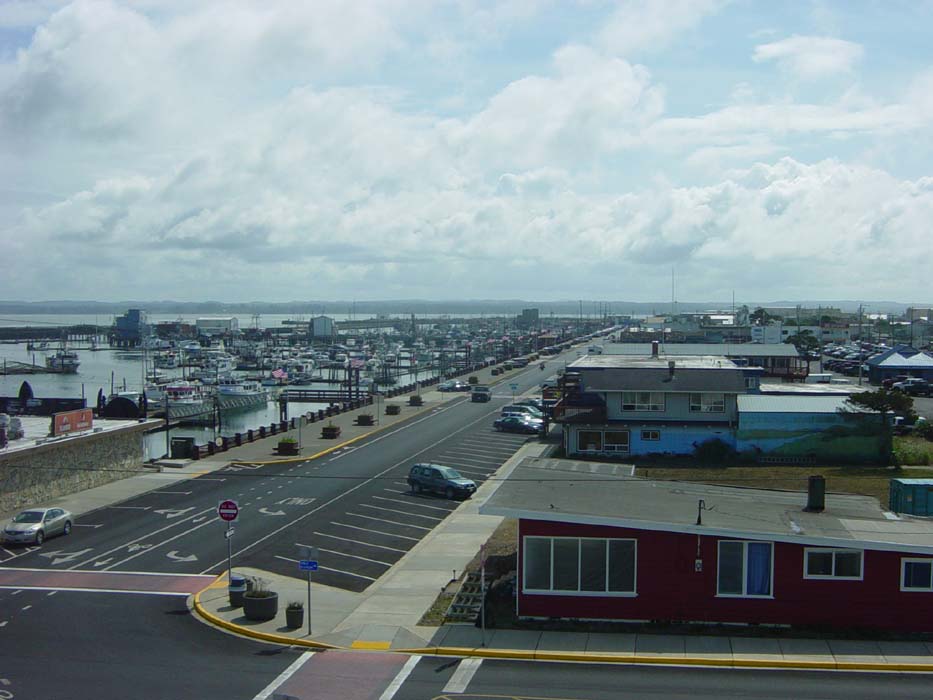 This is also from the observation tower, looking out over the bay. 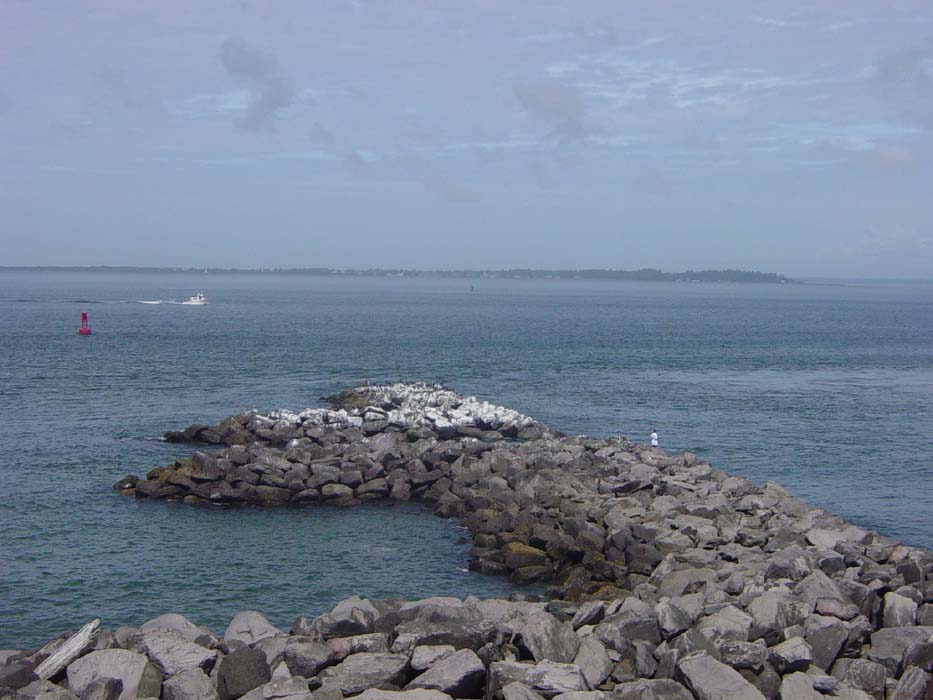 Now looking to the left, showing the breakwater behind the beach. Notice the nice little bike path running along there? I decided to see where that went. Why not, after all, that's why I'm here, to see what's where. 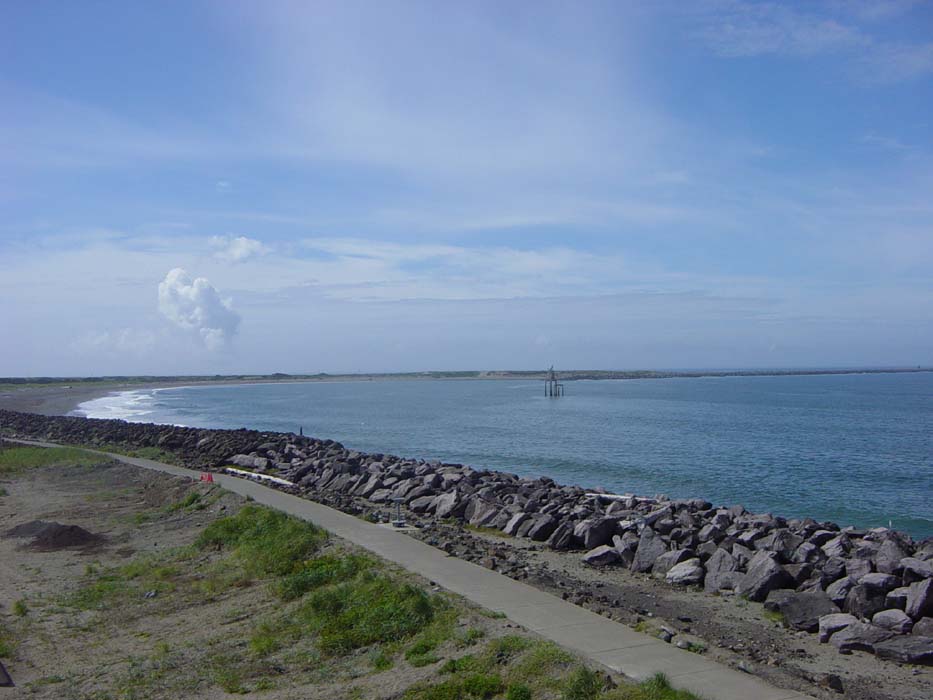 Well, as it turns out, it went all the way down along the beach, winding around through the windblown grasses and flattened shrubs that seemed to be everywhere along here. They weren't much to look at, but they kept the sand off the bike path. Anyway, this shot was taken just near the end of the trail, where it joined up with a street running in the general direction of my next stop. 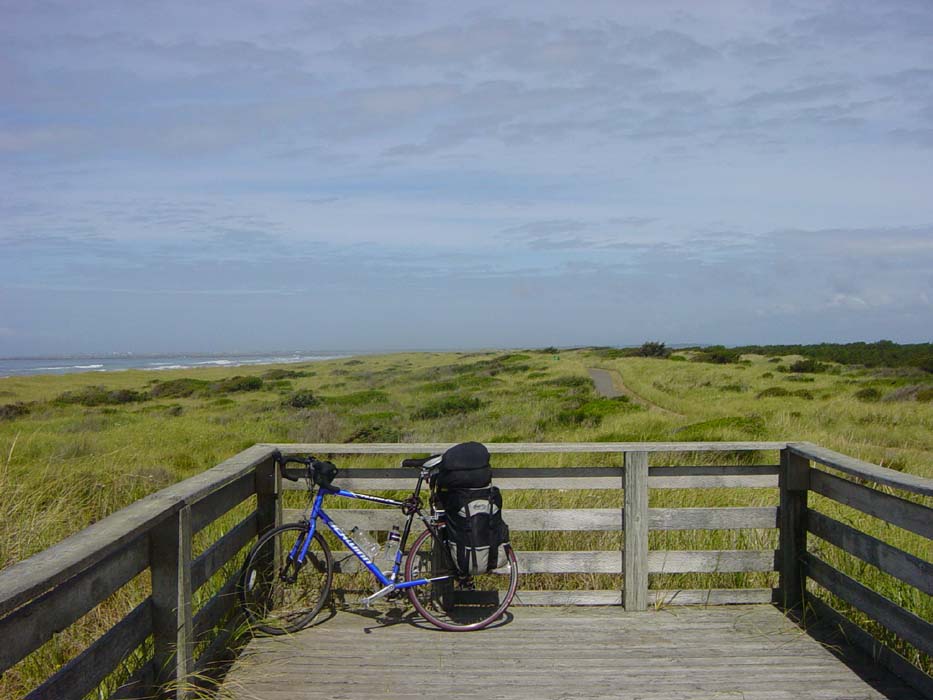 Which was this, the Grays Harbor Lighthouse, tallest lighthouse in the state! Note the bike leaning alongside, so you can get an idea how big this thing was. Reminds me of the giant spruce tree from yesterday, only not as knobby.

Anyway...there was a little gift shop inside and a staircase going up about 150 steps, but quite honestly I didn't feel like climbing a bunch of stairs midway through a 60-mile ride. (It's strange, but I can ride all day long, yet ask me to climb stairs and my knees give out.) 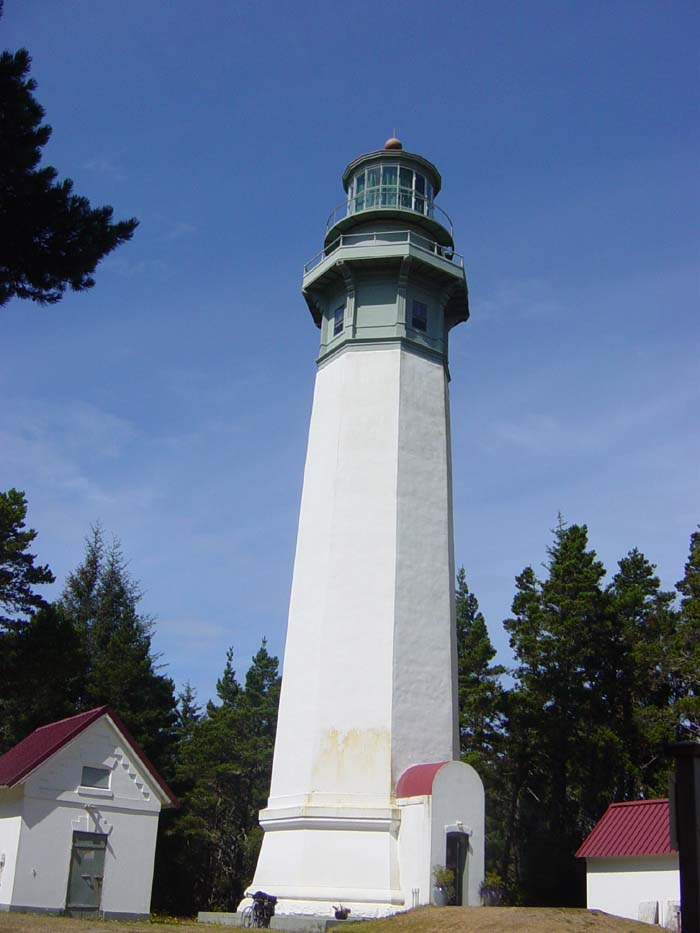 After that stop, headed out of Westport and down the coast southward. Unfortunately, for about the next dozen miles or so, there weren't any beach views. Most of what I saw looked like this. Notice once again the road is that terrible gravel stuff, although at least in some places there was a smooth shoulder. I sure hope Oregon doesn't pave their roads this badly. 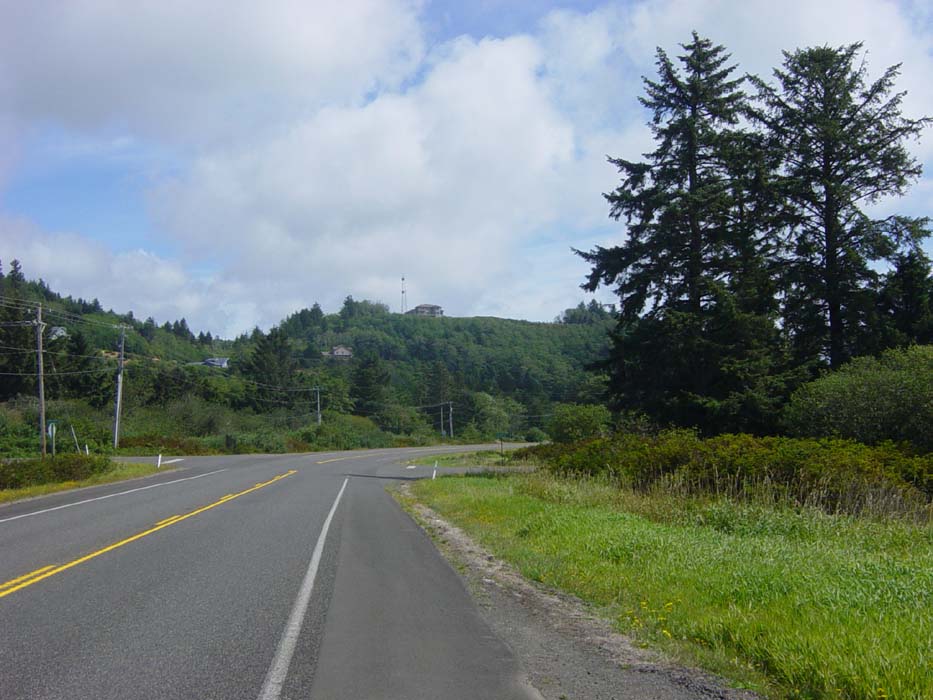 Sorry, I'm whining about the roads again, aren't I? My bad.

After grabbing some fish and chips at a nice little restaurant (the Mutineer) along the way, finally found my way back to the beach. Here are some of the better views. I like the single lonely (and probably dead) tree sticking up among the surf. 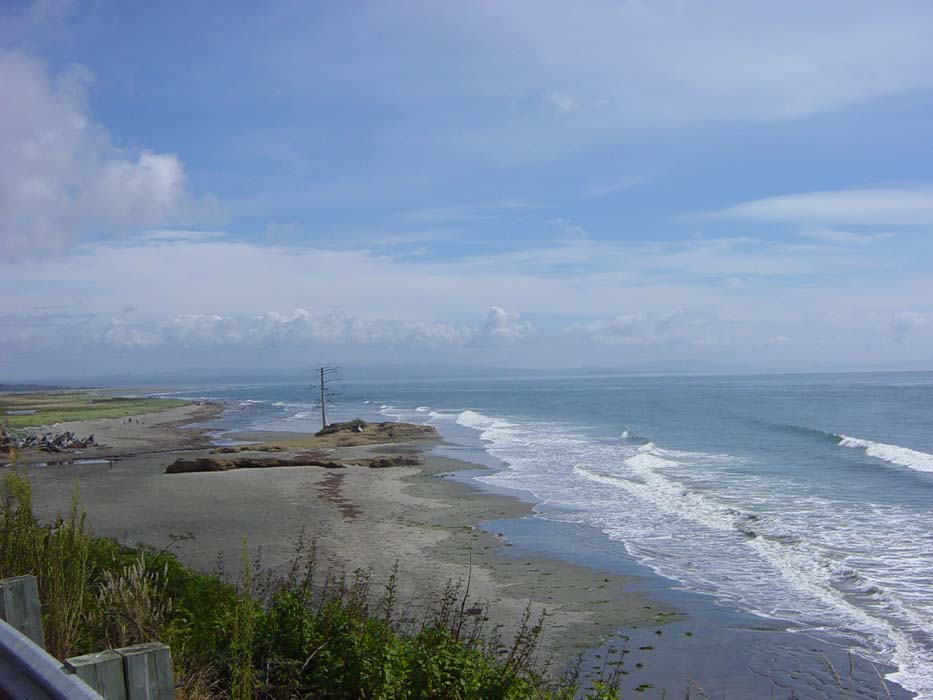 In some areas, there wasn't really a beach at all, just grass and/or wetlands all the way to the water's edge. 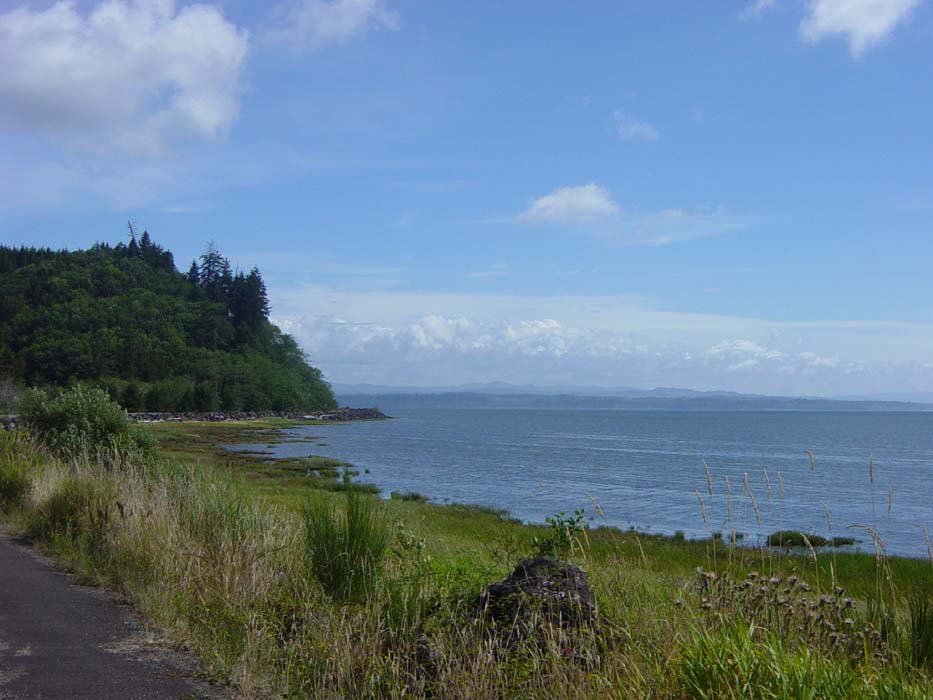 The views kept getting better, even as the wind finally worked its way around into a tailwind, making the rest of the day quite easy. For once I wasn't counting down the miles so I could get finished. 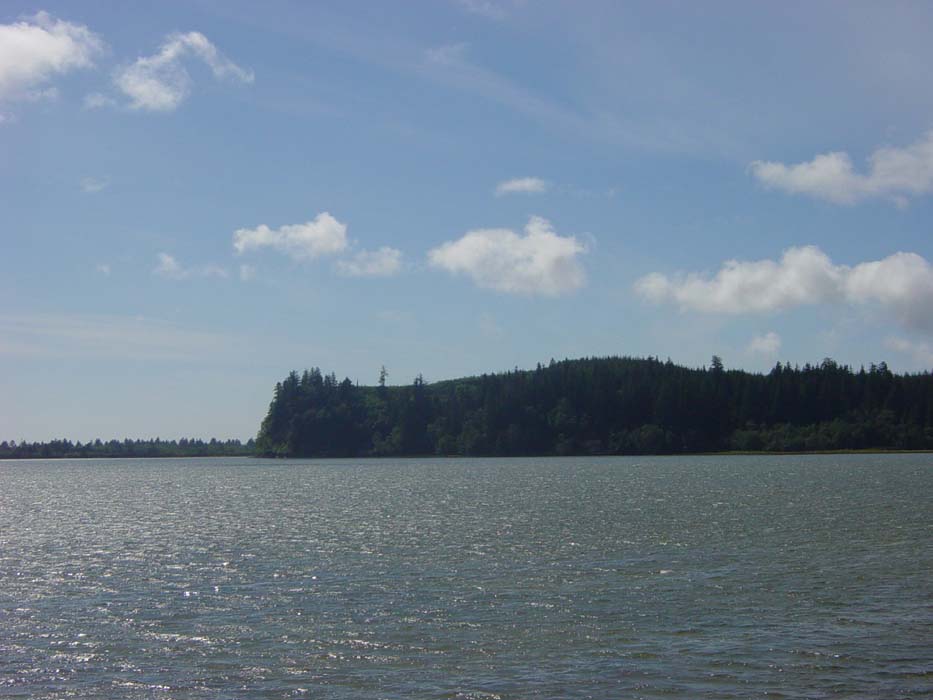 More coastline, this time with the town of Raymond just barely visible in the distance. 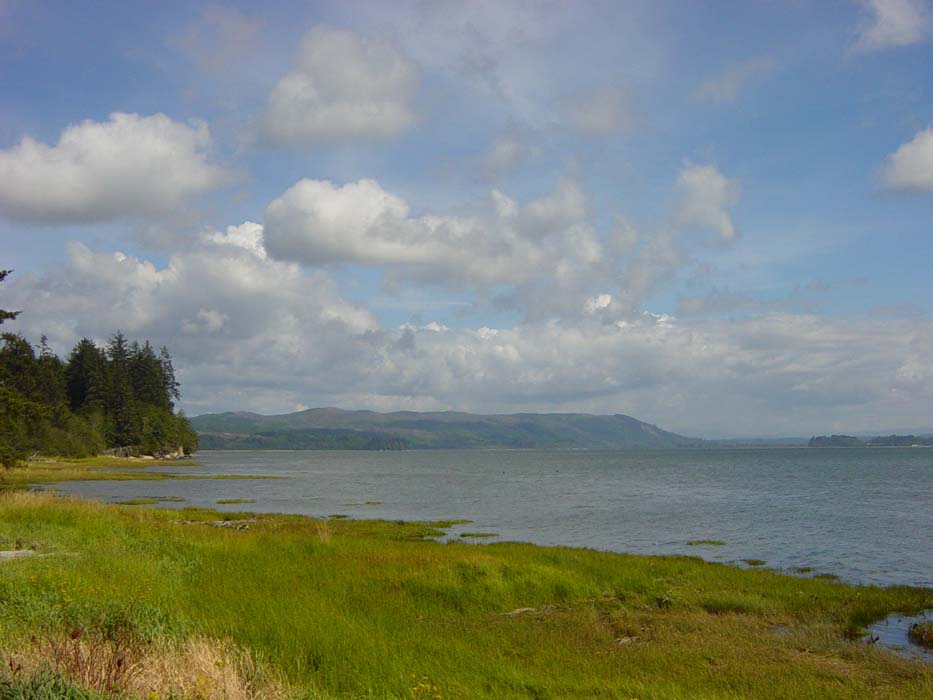 This picture is taken from the same spot as the previous one, looking back along the road I was on. I had to ride alongside that jagged rock breakwater for miles, with the water literally just a few feet away (and below). 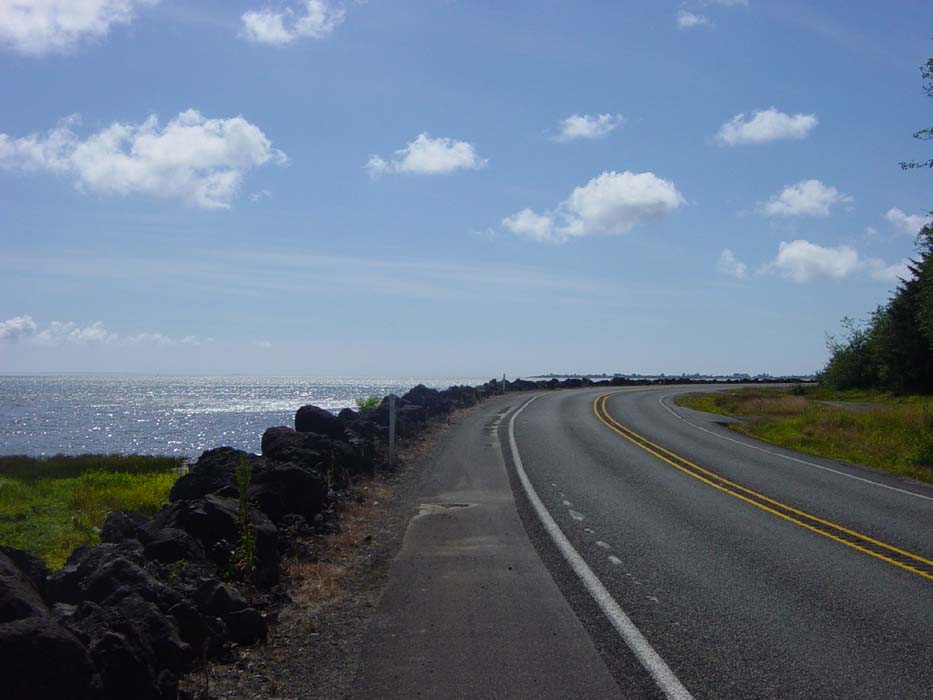 Once in Raymond, I discovered they'd lined most of the streets in this small town with metal figures (done by local artists) of people, animals, and machines. Most were standing alone, but here's one (near the carriage museum) attached to a real vehicle: 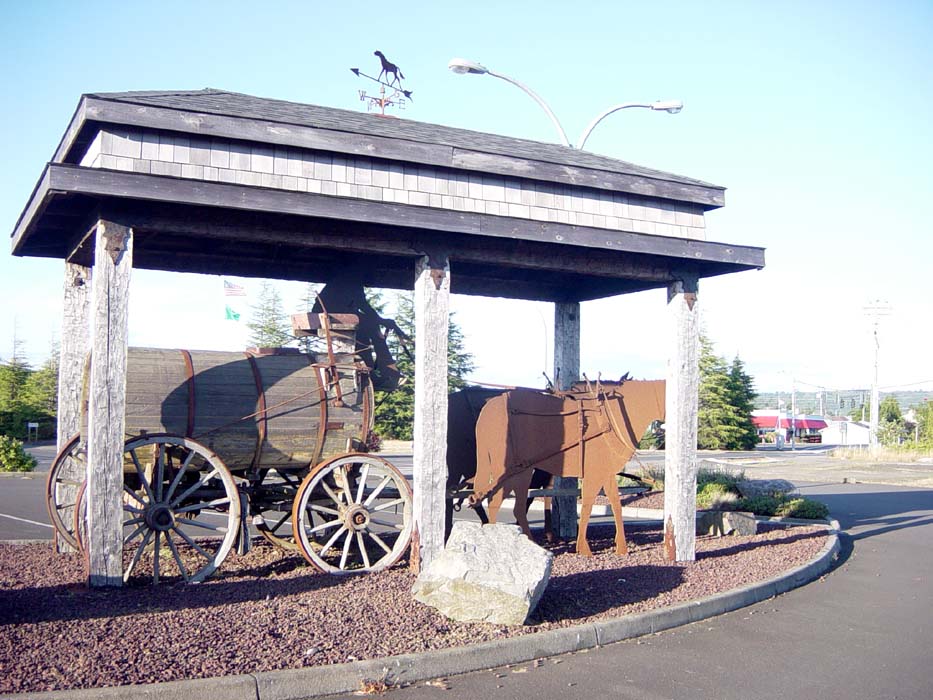 That's one big keg!  They must've had some huge parties back in those days.

Anyway, after this, it was time to find a hotel, and grab some food (spaghetti night!). By the time I got the food and headed back to the room, the sun was setting over the hills. 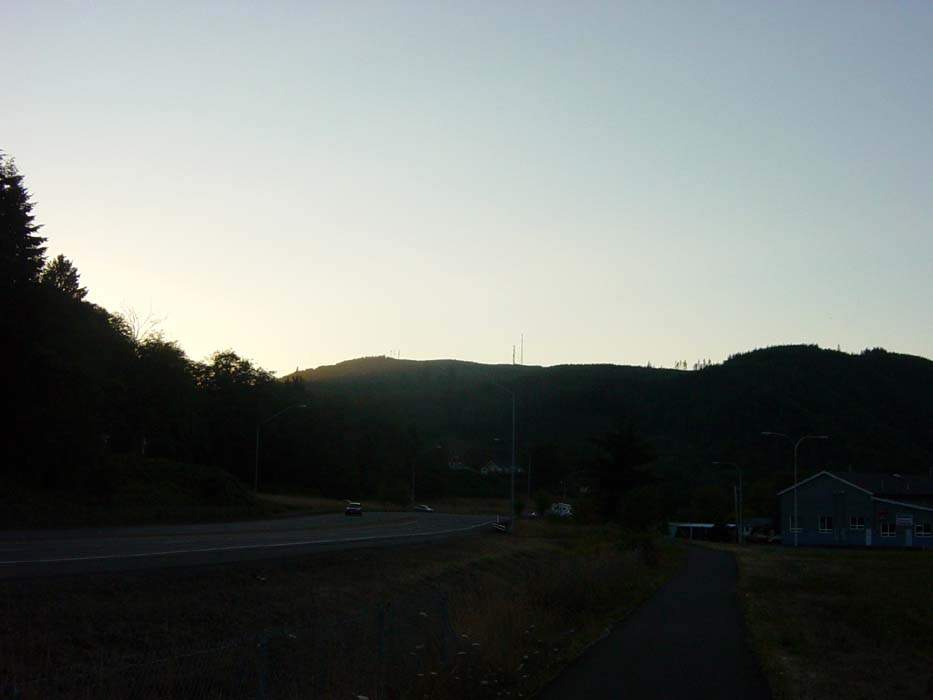 Now to eat and sleep. Tomorrow's ride should be at least as long as today's, with a brief trip to the beach. If I'm lucky, I might even make it to Oregon.