Yesterday, during the off day, I mentioned I ran into that touring couple on their tandem bike. Well, today as I was heading out of Astoria at about 10am, there they were again. This time, they were in the bike shop. Turns out that shortly after we parted ways yesterday, they suffered a severe bike problem and had to spend the night camping in the area. When I pulled into the shop to buy a new spare tire (finally...I put this off far too long) they were there having their wheel hub rebuilt. We exchanged names this time - they are Alan and Erin, and they've done a lot more touring than I have. We chatted for a while and then I took off after spending $40 on a nice tire that should be able to stand up to anything I put it through. I don't expect my front tire to last much longer, so this one will replace it when the time comes.

Now on to the ride. The road crossed another long bridge (about equal to the first half of the big one into Astoria, but without the giant hill) then settled into crusing along through small coastal towns. Then, approaching the beach, there was a very long climb (about 2 miles) that came with a great view at the end. This was the first of what is likely to be a number of such scenic viewpoints all along the Oregon coast. Here are some pictures: 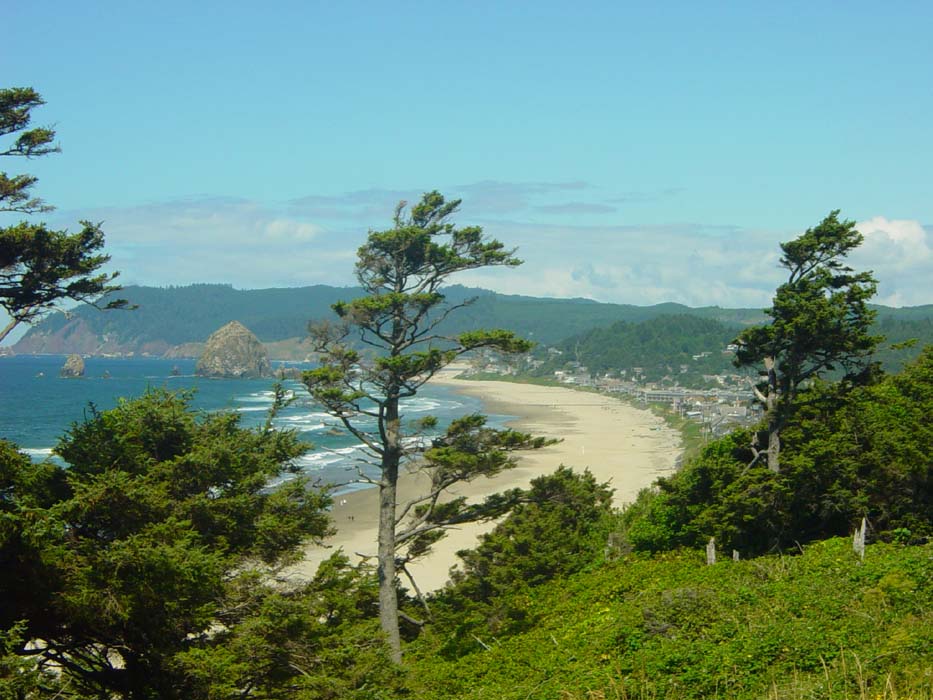 That big rock there on the left of the tree is "Haystack Rock," one of the ones you see often in photos of this state's scenic coast. The gorgeous strip of sand there is Cannon Beach.

Where I was standing (on the scenic overlook) there were several other rocks visible, including this one, called Jockey Cap because from the right angle it looks like, well, a jockey's cap. According to the placard there, this rock survived erosion (unlike the rest of the cliffs all around) because it's made of a specific type of stone, the name of which escapes me...but even so it will still be pounded to rubble within a few more hundred years. So enjoy looking at it while you can. 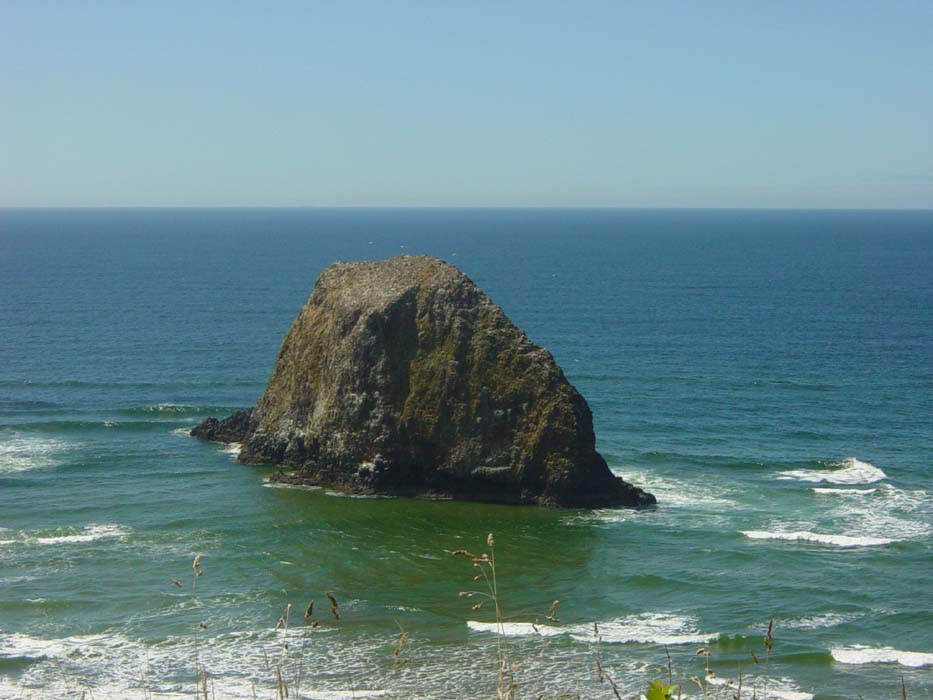 This next view is off to the left of the above, showing not only the beach and rocky shoreline, but also the terrain I face for the next few hours...i.e., I get to climb all those hills one after the other. 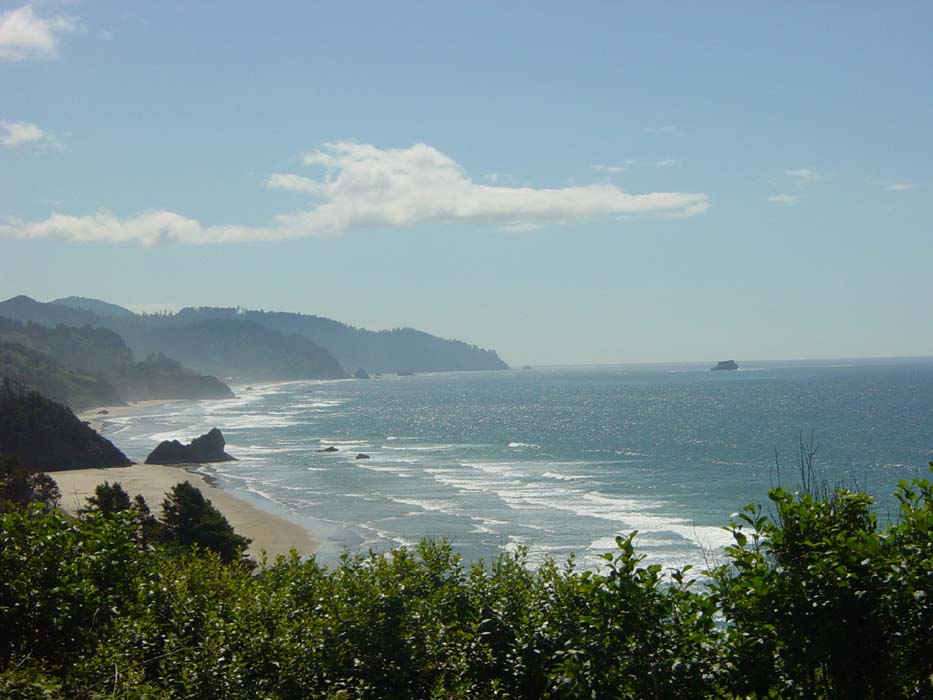 Or maybe not. Here's one I got to avoid simply by heading into this dark, narrow, and somewhat uphill tunnel. Notice the bicycle warning lights, which are nice, but I would've preferred a wider shoulder. At least the tunnel wasn't that long (you can see the end of it maybe a quarter mile ahead). 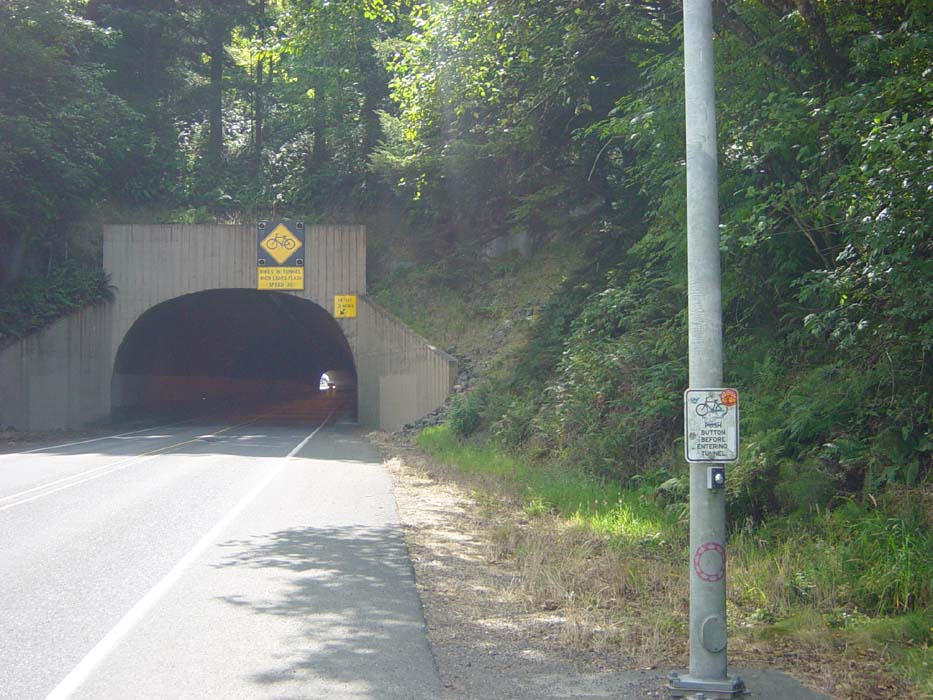 I took a couple more photos after this, but the batteries started dying on the digital camera, and the pics didn't really come out, because I was in shade at the time and the lighting didn't work. The ride, meanwhile, continued until I had to climb another massive hill, this one about 2.5 miles long and extremely brutal. At the top, though, the view was breathtaking. Here are some photos, but keep in mind the first two had to be fixed by adjusting brightness and contrast in Photoshop, so if the quality looks different, that's why.

In the first one here, notice how the road up winds along this rocky cliff with only a low wall to my right separating me from certain doom. This wasn't as bad as it sounds, seeing as I was barely moving during the climb, except when trucks blew past. What made it interesting was the descent later. But first, the view! 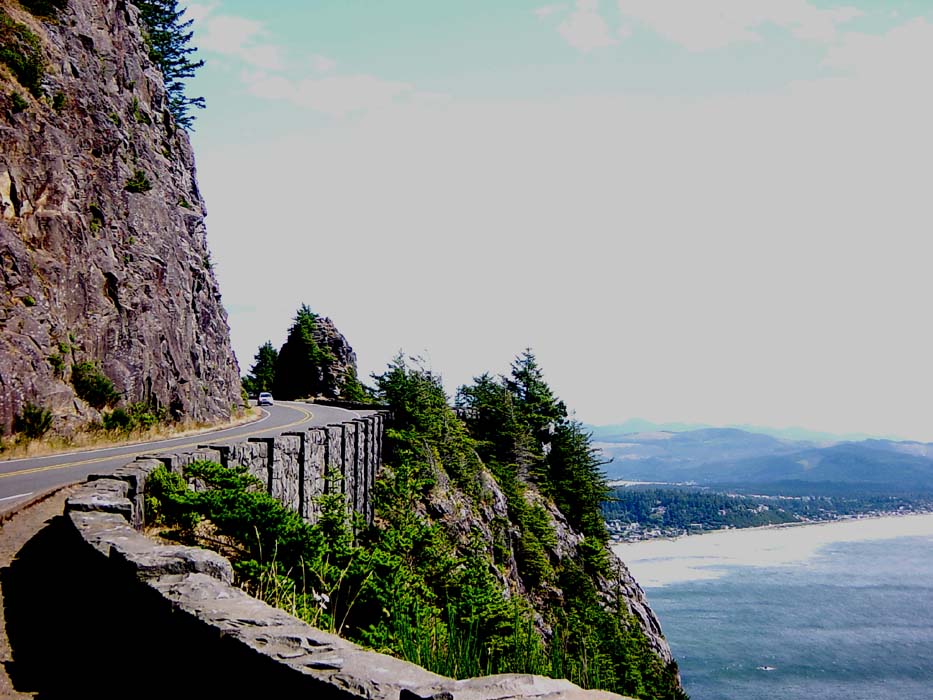 There were actually three or four scenic viewpoints here. This picture through the trees pretty much illustrates just how high I had to climb upwards to get to this point. Probably somewhere around 1000 feet, but I'm just guessing. It sure seemed like a lot, at least. 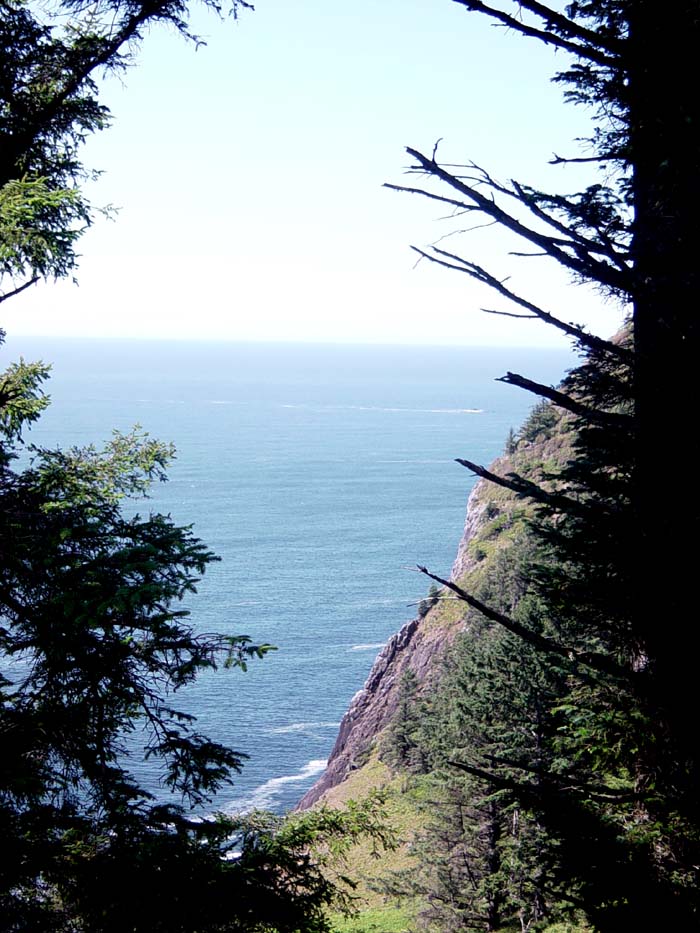 After taking these shots and some others that didn't turn out, I moved on to the next viewing platform and discovered the dying batteries. After replacing them, the images came out much better. Here's another look at the beach ahead (Nehalem Bay). The road looks to be a lot smoother for a while, once I make it down to the bottom. 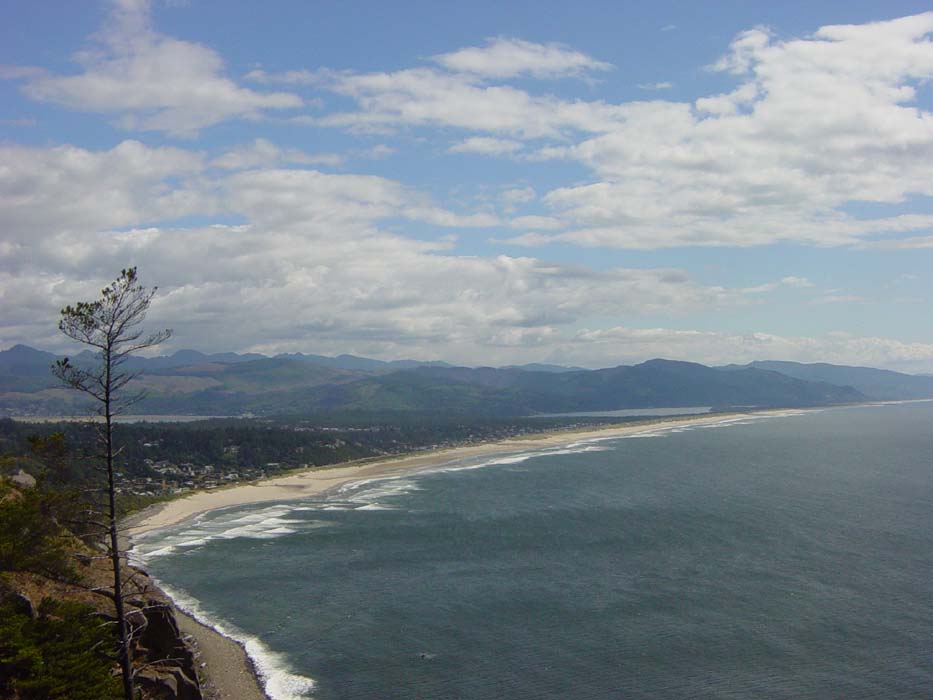 Another look back north that shows just how rugged this coast is most of the time. I actually rarely saw the beach, except at these scenic viewpoints. The road stayed mostly inland all day. 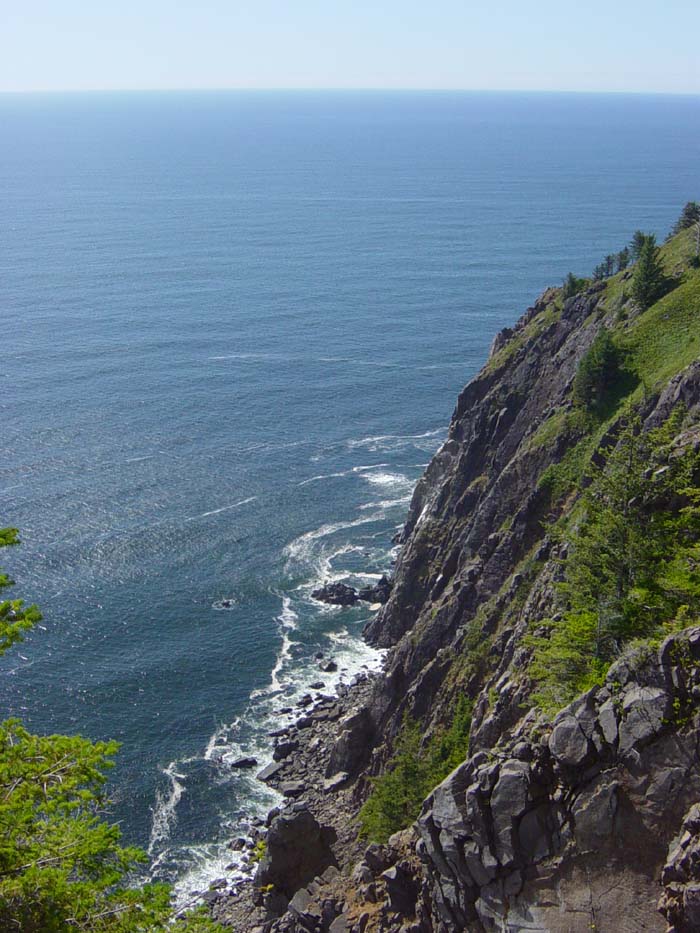 This shot is looking back at the hill I was just on, from a position all the way across Nehalem Bay (about an hour later). See that kind of notch on the very left hand side? That's where I was standing. I had no idea the mountain was so much higher...it really felt like I climbed a lot more than that. 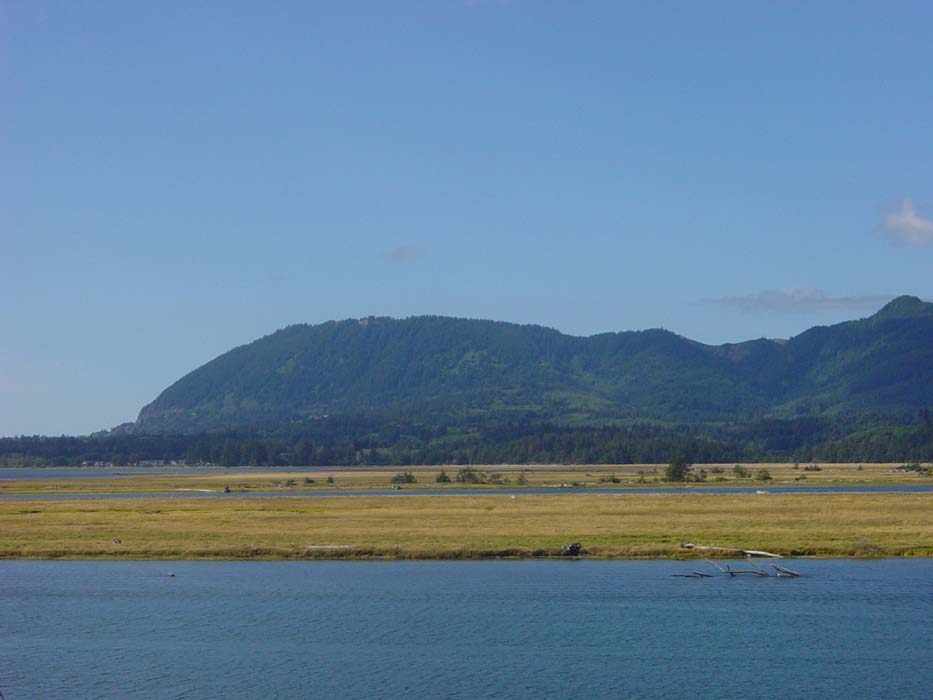 Heading onward, I passed through several small towns including this one, called Garibaldi. The name sticks in my head because, as you can see if you look very carefully, there's a giant "G" in the hillside over the place. I guess being a small town, unlike Hollywood, they could only afford one letter? (Just kidding, please no hate mail from Garibaldi residents.) 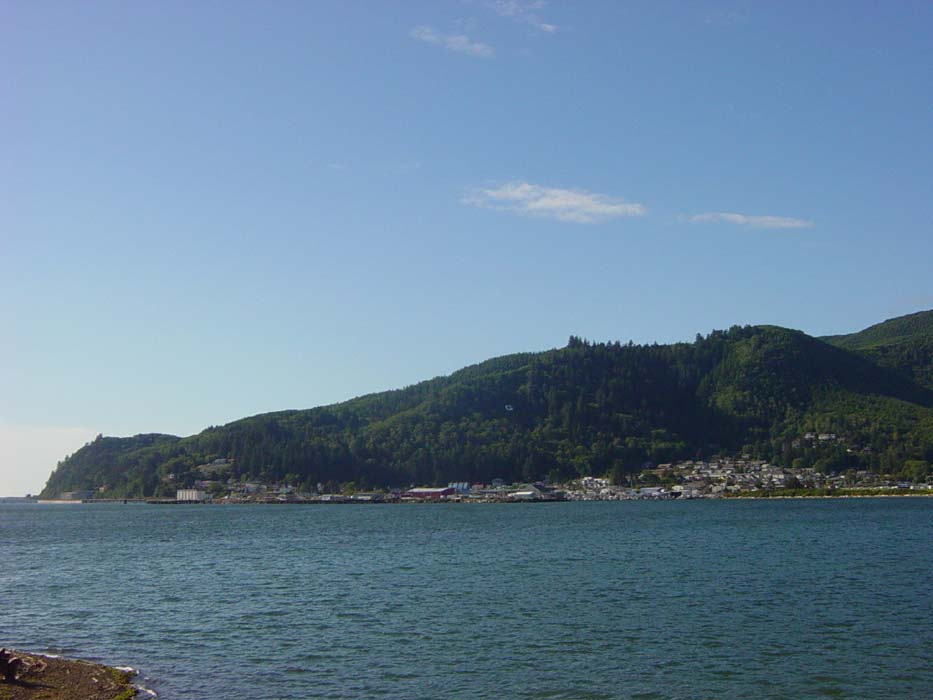 There was only one more photo today, this last waterfront shot before I headed inland towards Tillamook. 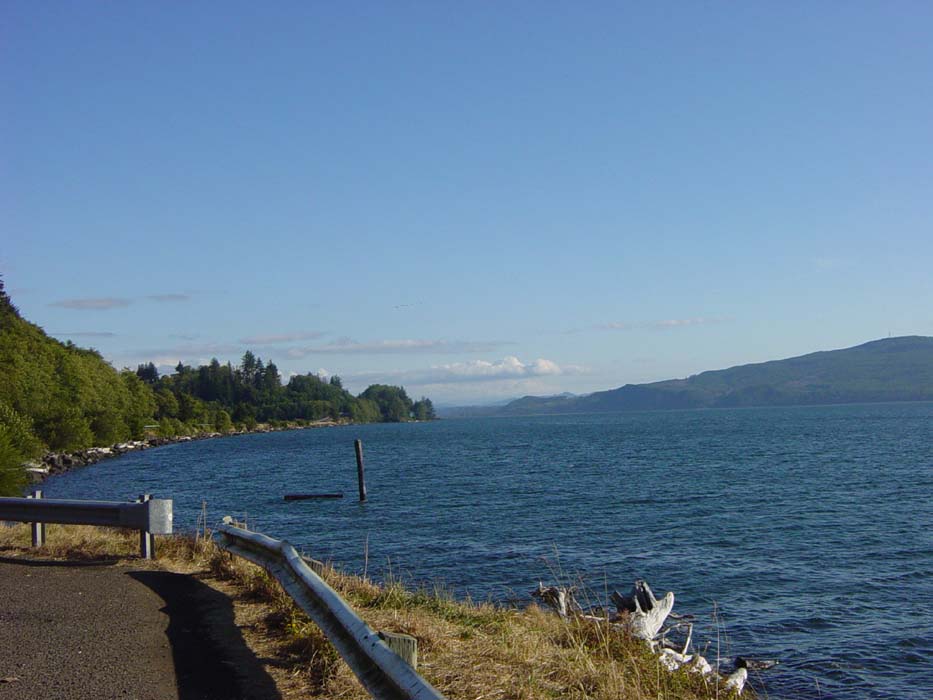 Tillamook is a medium sized town located a few miles inland from the coast, and there were several hotels there, but they all wanted at least $75 a night for a room, even the terrible looking places that wouldn't charge more than $35 back home. I still had 2 hours of light and the weather was good so I decided to camp, but first I had to find a site. There weren't any in town, but the map showed a couple of state parks on the coast, so I took off towards a town called Oceanside. This proved to be a mistake, as the road that way turned into another climb like the ones earlier in the day. I managed to get over it, but there wasn't any camping at all, so I had to go back. Fortunately, there was an RV park on the outskirts of town, near the river, that allowed tent camping. Plus, they were close enough that I could order a pizza. Exhausted, I set up my tent, ate dinner, and got very, very cold as the sun finally set. They did have wireless internet here, but no AC power, so there was no way to use the computer for long. With nothing to do, I got bored and fell asleep somewhere around 10:30.