North Bend to Port Orford, Oregon
Miles: 64
Terrain: Up and down all day, a couple tough climbs
Weather: Warm and sunny early, then cool and cloudy most of the day, then sun again late

The morning was nice enough, sunny and about 60 degrees, but I was in no particular hurry. According to the map, there was a town about 60 miles south and the next one was about 90 miles, which was beyond reach considering my legs were still pretty sore from yesterday's climbs. There was a campsite at the 65 mile point, which would be my target if no hotels were available. From this point on, I'm going to stay in hotels whenever possible, if for no other reason than I get better sleep and feel ready to go in the morning instead of dragging and aching all over. I'm willing to pay up to $65 for a hotel room, $70 if desperate, but anything above that is out of the question.

The ride out of North Bend and through the town of Coos Bay (pronounced "kooz," or so I heard on the weather channel that morning) was relatively easy and the sun was out, so I had my sleeves rolled up and shorts on, instead of the usual sweatpants. Once out of town, there were some moderate climbs, one serious one, and another one that was at least as high but wasn't as steep. Once on top of that, I cruised along for a bit, traveling inland away from the shore, and passing mostly through lots and lots of trees. Here's what I'm talking about: 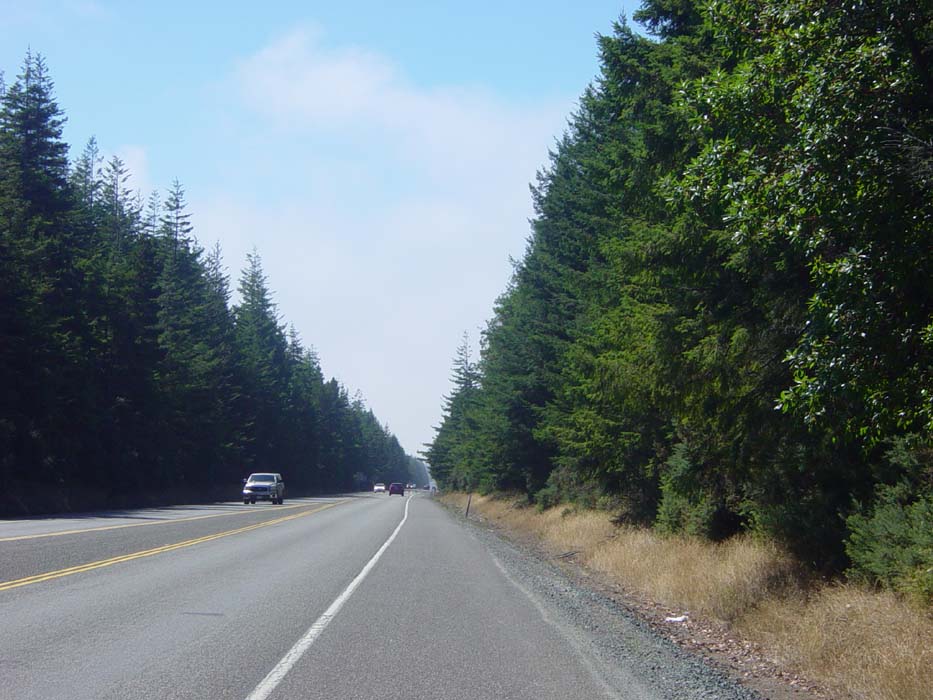 Trees everywhere...you'd think I was in a national forest or something. Anyway, notice how the sky is blue overhead but then starts to look white towards the horizon? That's because about this point (maybe 15 miles into the ride) I passed into another region of low clouds and fog. This lasted most of the rest of the day and cooled things off enough that I had to roll the sleeves back down and put the sweats back on. Plus it just made the whole day dark and gloomy.

At about the 30 mile point I was approaching the town of Bandon and came to a sign mentioning a lighthouse at the state park off to my right. Since I'd pretty much decided by this time not to try getting all the way to Gold Beach (the 90-mile town), I decided to go have a look. The park was pretty big and I didn't actually get to the beach for 3 more miles, so this side trip tacked 6 extra miles onto my ride, not that I minded much. The beach wasn't much to see, except for the seemingly endless wall of driftwood at the high tide level. See what I mean? 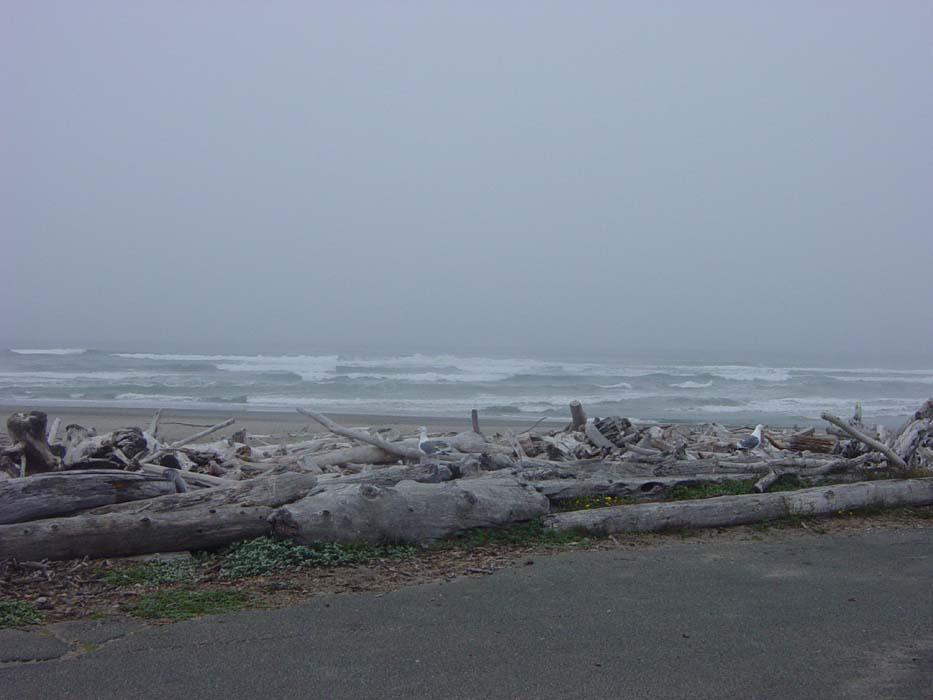 That also counts as the Random Wildlife Sighting of the day, even though it hardly seems worth mentioning as those birds are everywhere.

As for the lighthouse, here it is. This is an unusual one in that it didn't warn ships away from rocks, it was used to direct them into the narrow harbor entrance here between two jetties. Incidentally, if you don't know what a jetty is (I didn't, at least not really) it's a long sea wall that juts out into the ocean, keeping waves and shifting sandbars from blocking a nearby harbor. A welcome consequence of their presence is they attract a lot of marine life, which is why fishermen like to go out on them to try their luck. 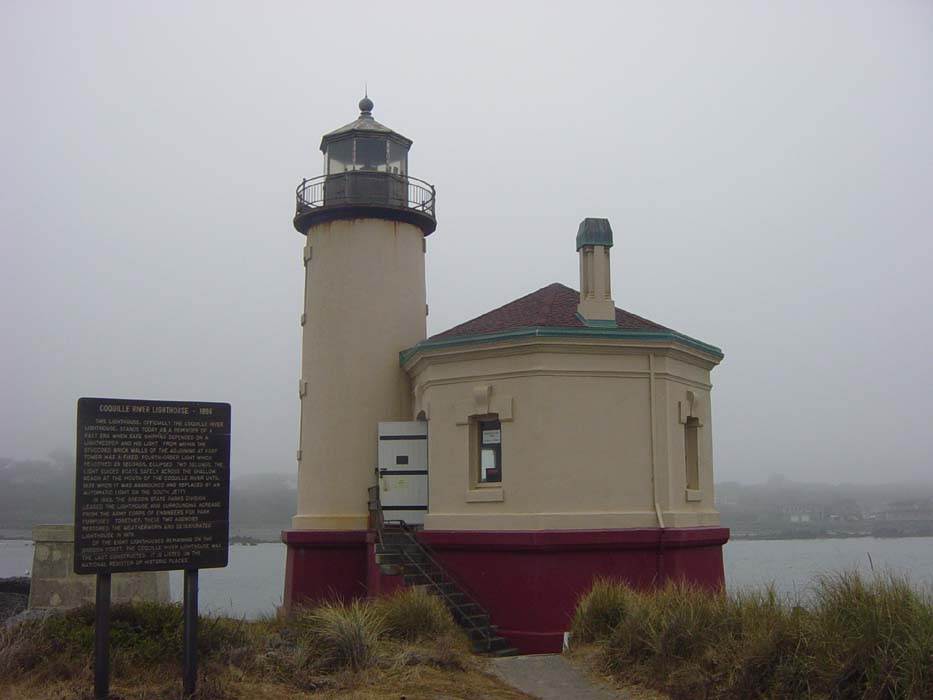 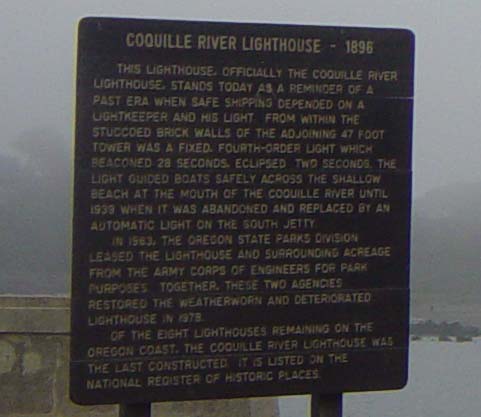 Heading back to Bandon, I crossed over the river there (yet another bridge crossing, not too bad this time though) and moved back inland. The road now became an endless series of short up and down hills broken only by a couple of half-mile to mile-long steep climbs. As usual, I dreaded the appearance of this sign here, which might as well say "Bicyclist Leg Pain Ahead." They don't put in passing lanes for anything other than hills. 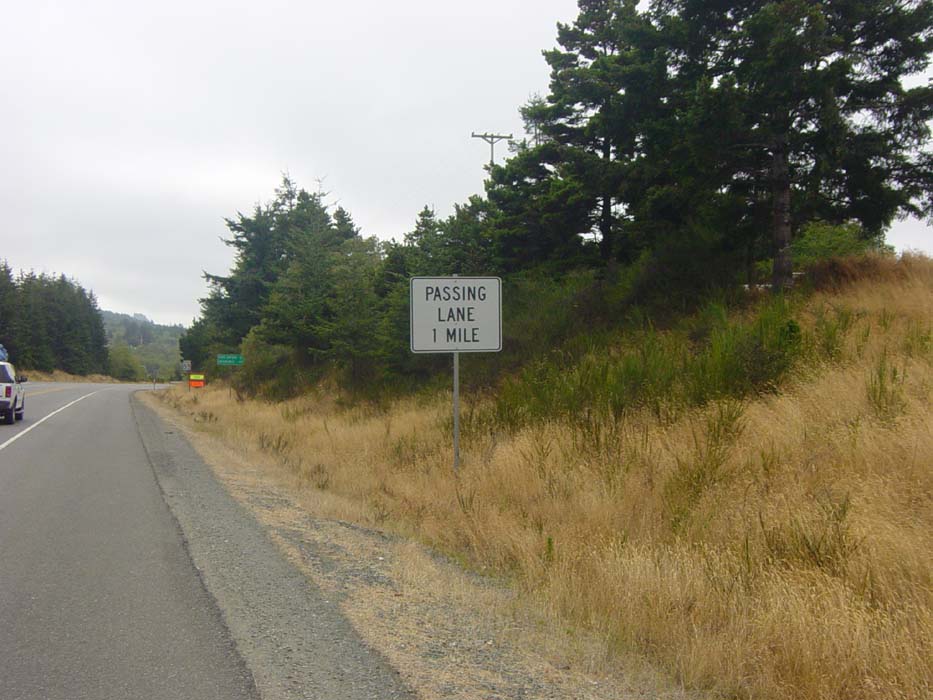 Yep, sure enough, here's the hill in question. This particular one was about 8/10ths of a mile and not terribly steep. My usual strategy for hill climbing is to conserve energy, slowing down as much as possible (too slow and I start wobbling around too much), shifting into the big chainring, and adopting as steady a pace as possible. I rarely get out of breath unless the climb is really bad. The major consequence is that my legs just start hurting, in slowly increasing degrees, and usually after a mile or so I have to stop and rest. It's impossible to drink water while climbing (need both hands on the handlebars while pedaling my overloaded and unstable bike) so I have to get some before the climb starts, during a break, or at the top. Lots of time I stop at the top anyway for a picture, anyway. 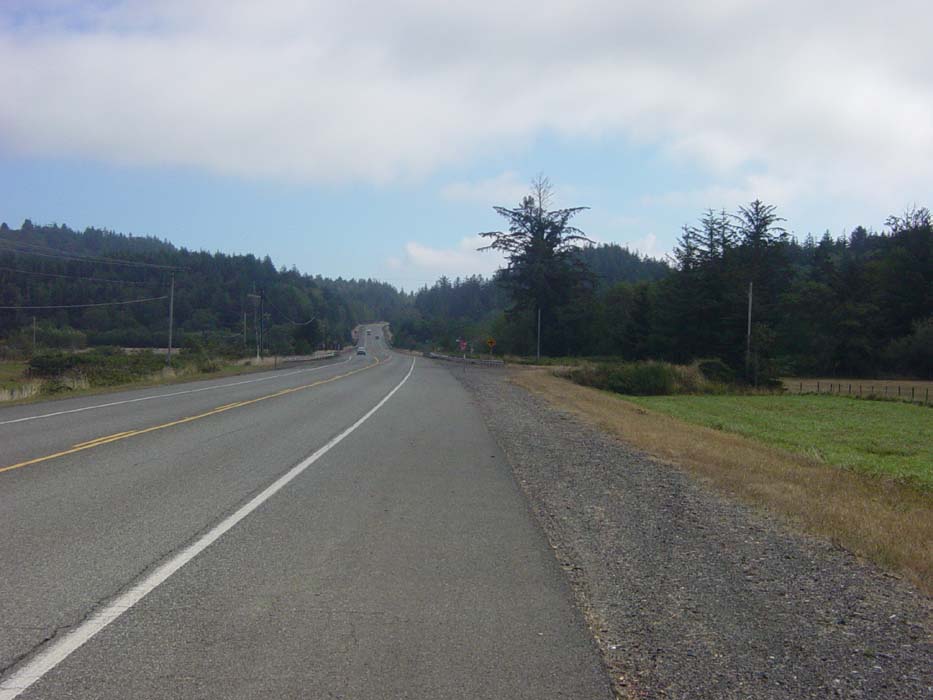 Notice that the sky is finally starting to clear. This is near the end of the day. As I got up over the hill, the sun was fully out. Finally I could see that much more happy sign, the one showing the passing lane is finally merging, meaning the uphill grind is finally over. (As it turned out, in this particular case, there was another one about a mile further down the road, but that was the last hill of the day.) 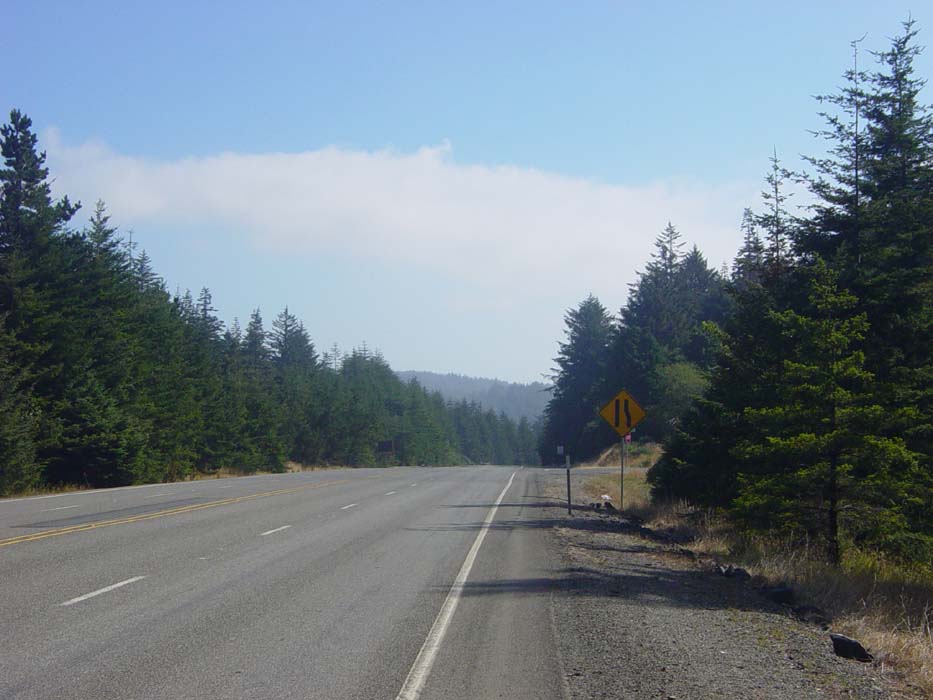 I don't really remember why I took this picture. Probably so I could show you how basically boring and desolate some of the terrain looked around here. After so many nice roads and clear views, this was about the best thing I had to look at all day. At least, 99% of it anyway. 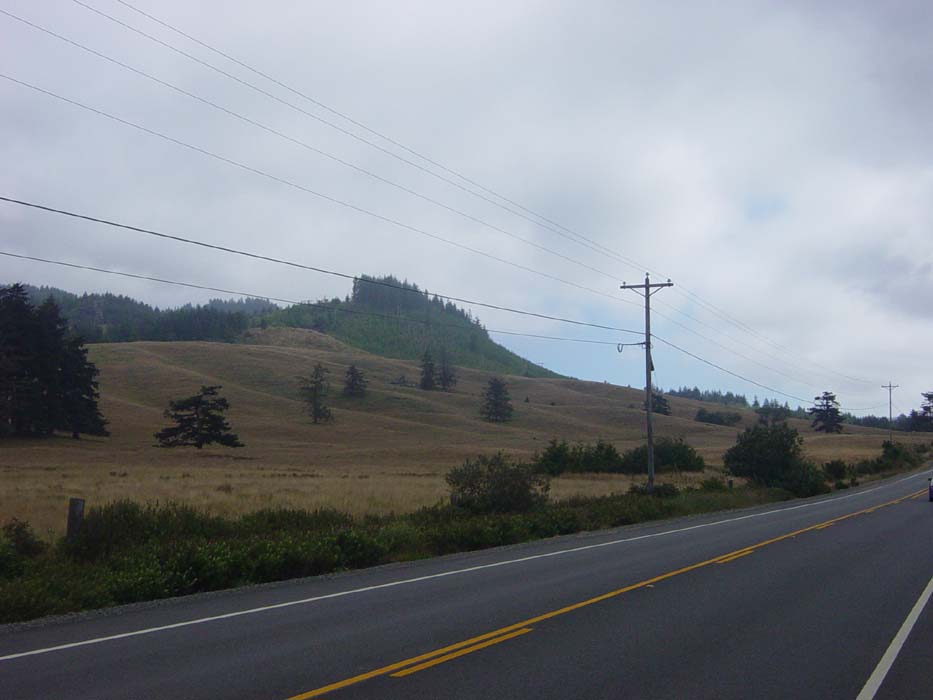 The I finally got back to the coast, the sun was out, and this sight greeted me at the town of Port Orford. 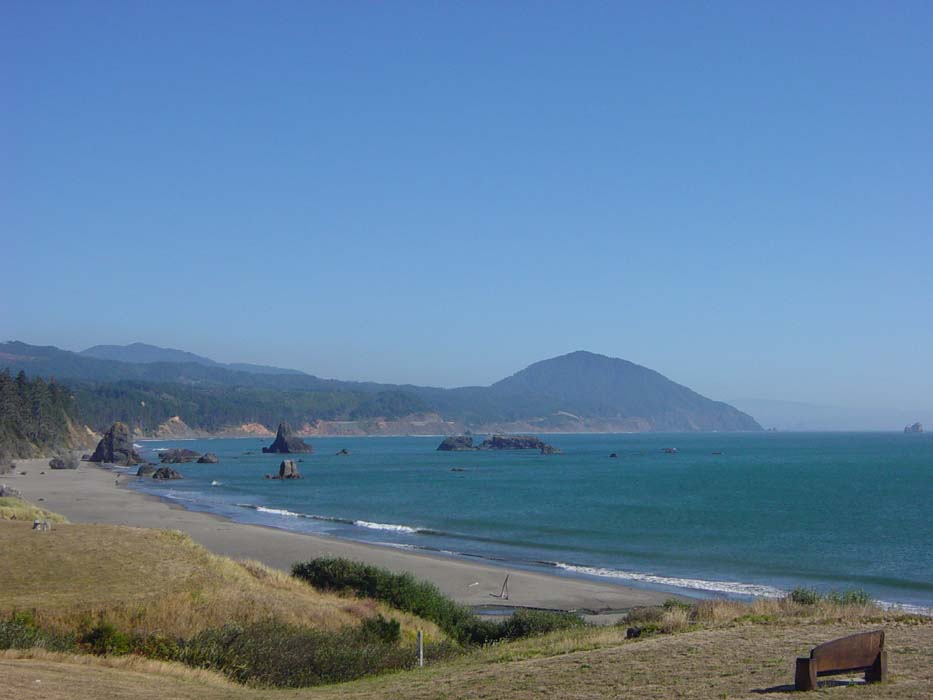 Now that's more like it! Just to the right of the above picture, there was another large rock, and beyond that a tugboat moving into position to start maneuvering a barge around the jetty. 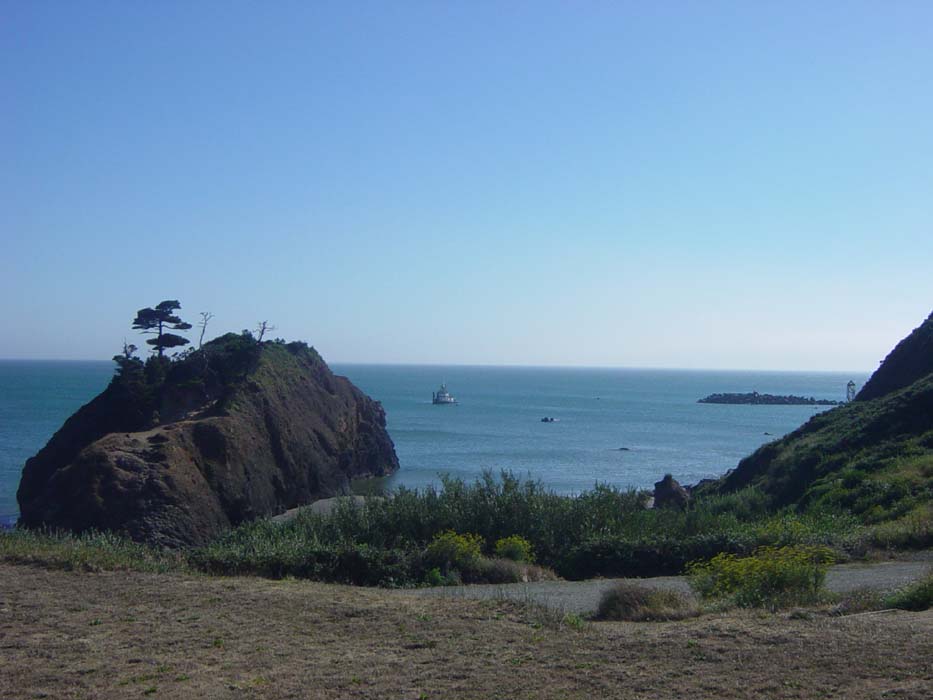 There was a short climb nearby so I headed up for a better view, by which point the tug was at work on the barge, pulling it out into the bay and eventually pushing it out of the harbor entirely. I can see why you'd want an experienced tug driver here, considering the sheer number of rocks sticking up out of the water, and probably just below the waterline too. 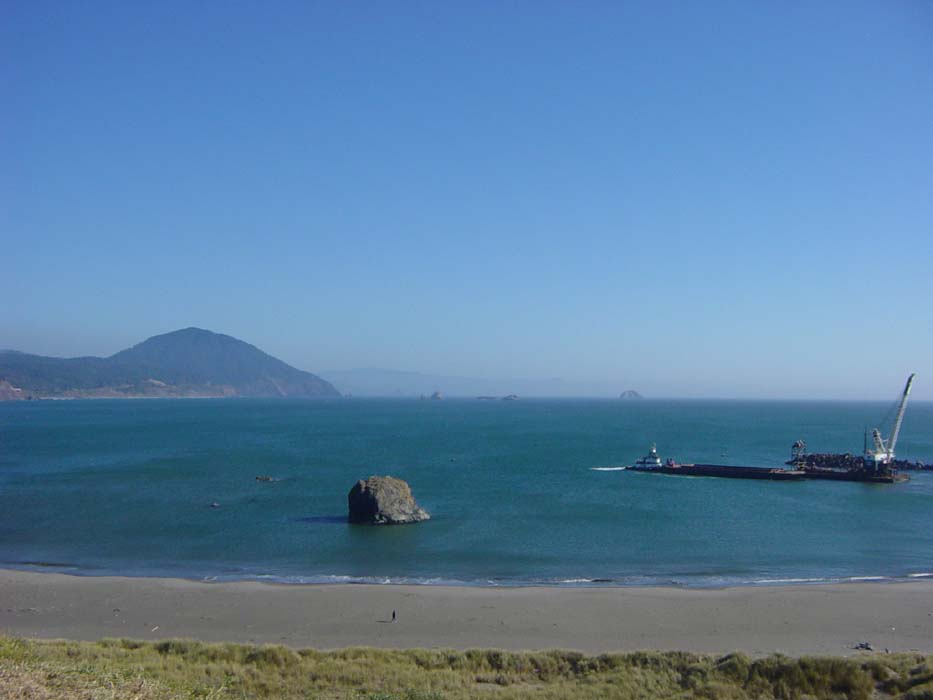 See that big hill in the background there? That's called Humbug Mountain, and it sticks up about 1,400 feet above sea level. Route 101 basically climbs up the side of it, probably about 2/3 of the way up. I knew this already from my map, and that's where the campsite was 5 miles down the road. Beyond that, there was nothing but "day use" parks (i.e. no overnight camping) until Gold Beach, another 25 miles past the mountain. The time was 5pm, so I theoretically could've made it to town...but my legs need rest, and I certainly wasn't in any mood to climb Humbug today. So I looked around for hotels and found one for $62. I was quite happy to find one the Friday before Labor Day, honestly, and as it turns out it was the last single room in town. There were a couple double rooms and that was it. Less than an hour later those were gone too. I guess that means I need to get finished earlier in the day...and that may well mean if I'd tried for Gold Beach I would've arrived to find everything full.

Tomorrow's ride should get me almost to the California border, by the way, but not only do I have to get over Humbug Mountain, there's another even worse one about 2/3 of the way along. At least they're along the coast, so that should mean some good pictures, I hope.