What a difference a day makes where the weather's concerned...yesterday was relatively warm and pleasant, whereas today was cold and gray and started out with drizzle that turned into light rain just as I reached the start of the hills I mentioned yesterday. See, where Route 1 splits off of US-101, the road starts out with a tremendous climb of about 1,000 feet over about 3.5 miles. This was the only warning I had of what was to come, and trust me, this did not bode well. 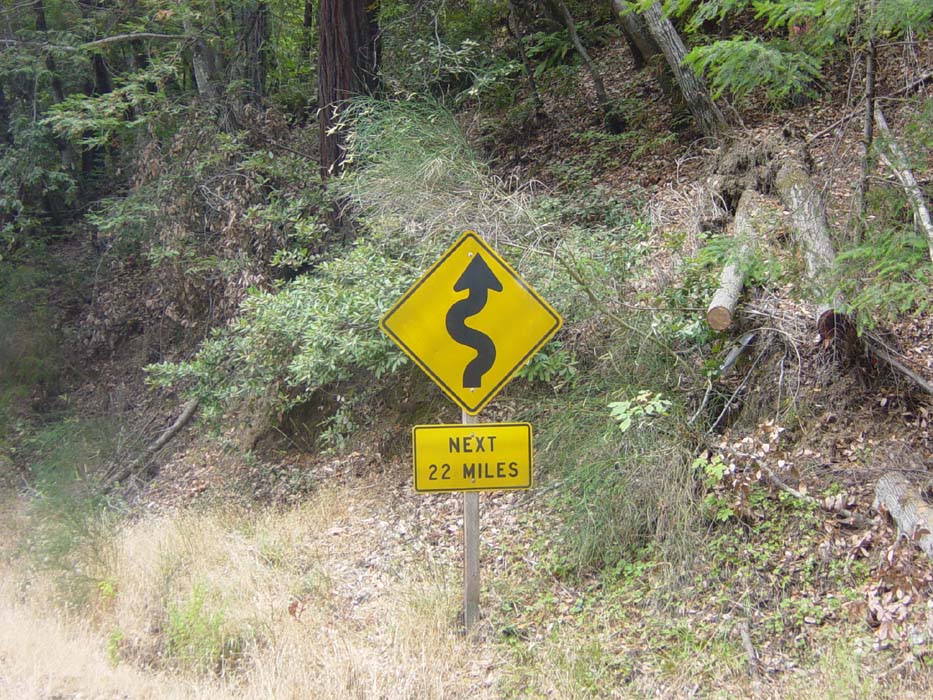 The climb went on and on, through nasty switchbacks and hairpin turns that made me really glad hardly anybody was driving through this narrow, twisting path. The few times anyone came along, they would dutifully slow down until they could see past me and safely go. All in all traffic didn't cause any real problems here. The main issues were the sheer steepness of the hill (mostly 6-7% grade but I'm pretty sure it hit 8% or more a couple of times). Incredibly, I only had to stop once on the climb, primarily because I just didn't want to stop and give my muscles a chance to lock up, but also because most of the time there wasn't really anyplace to safely rest, or take any good pictures. This is the only shot I was able to take and it was still raining (lightly) at the time. 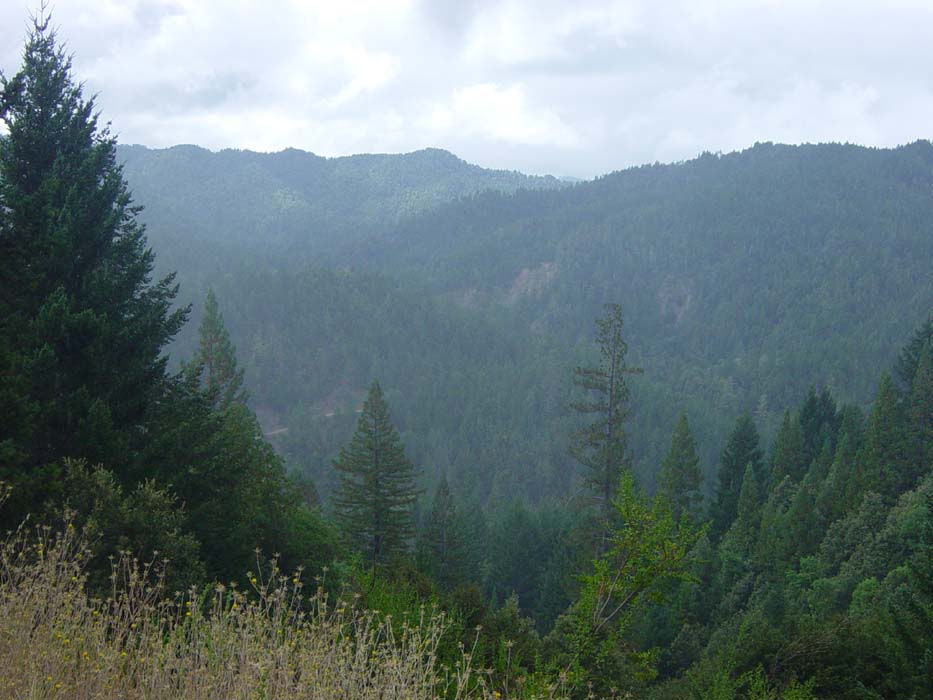 I had no idea how long this hill would go on so I just kept going, very slowly, watching around each hill for any sign I was near the top. Finally it just sort of topped off without any kind of warning or anything and I found myself going down the other side of the ridge. On this side of the mountain, the sun was out (briefly) and I snapped this pic of the sort of twisty, narrow road I had to descend. Keep in mind it was wet, too, even though it's hard to tell in this shot. Oh, also, where the road banks right up there, it immediately winds left (you can just barely make this out in the image), drops down behind that batch of trees and then makes a hairpin turn to the right again. There were lots of signs warning to slow down to 25, 20, or even as few as 10 miles per hour for certain blind corners, and most of the time there were huge scrapes in the asphalt from places where trucks and RVs had gouged out a chunk of the road on the way around. These made significant obstacles for the descent, forcing me to keep my brakes tightly gripped until my hands hurt. 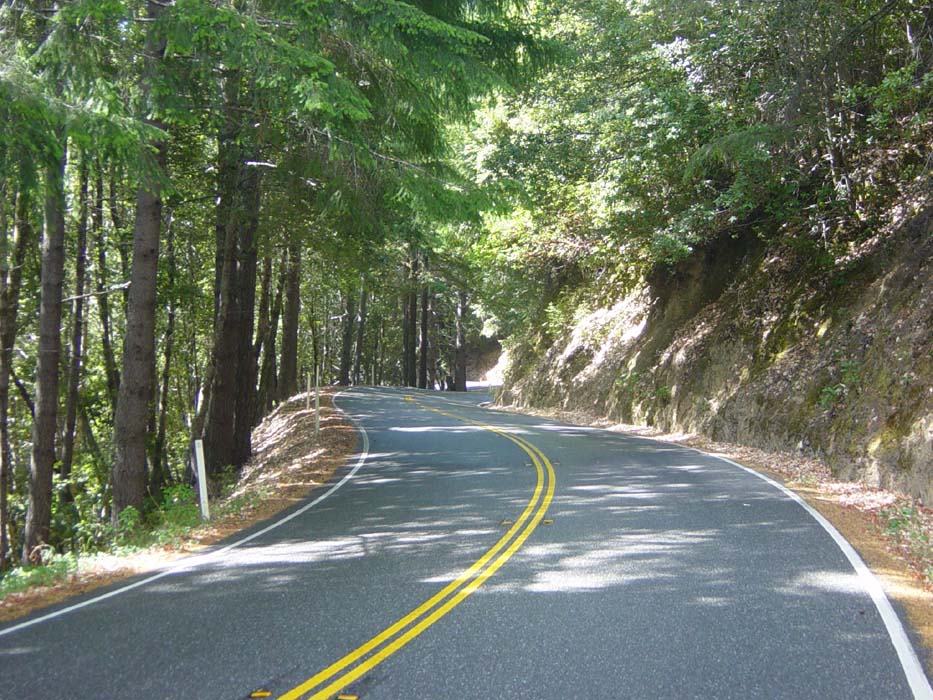 The rain stayed away for a bit after the road leveled out in the valley, whereupon I spent about 20 more miles just going up and down, never really getting to enjoy any flat spots or anything like that. Then, when I got to the other side of the valley, there was another gruelling 2.5 mile climb uphill before the final descent to the coast. Unfortunately there were almost no places to take decent pictures because the trees were so thick. Here's one of the few shots I was able to get, just a tantalizing view of what I might've been able to see if only there was a nice opening or ledge somewhere. 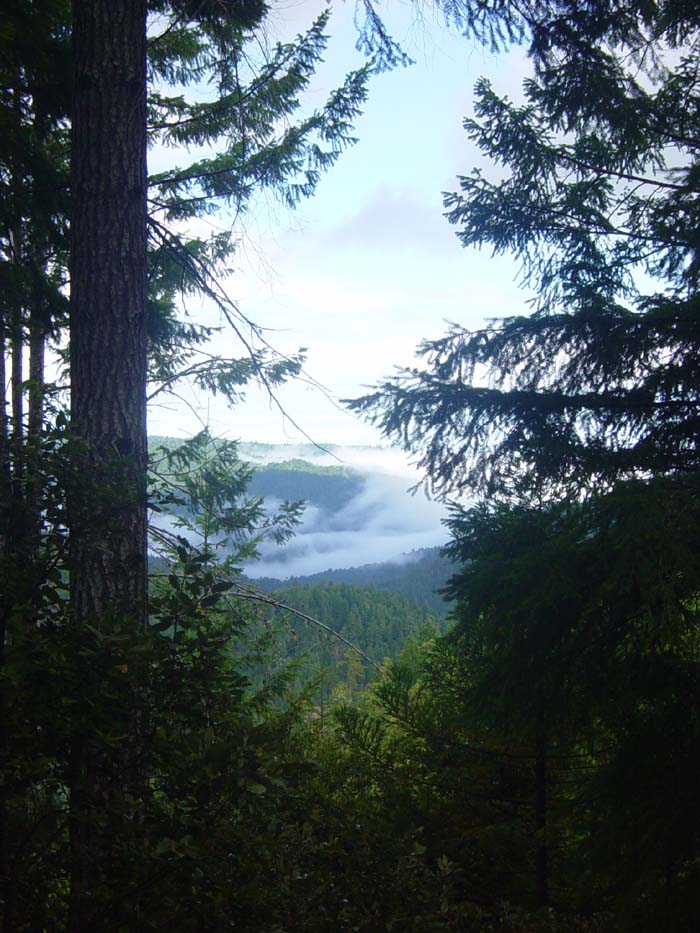 Don't get me wrong, the scenery wasn't all that bad along the road, sort of like this most of the time. This is one of the last times I would see the sun all day. By this point it was also extremely cold (probably about 55 degrees) and I had my jacket on, so underneath I was sweating and getting very chilly every time the wind started up. 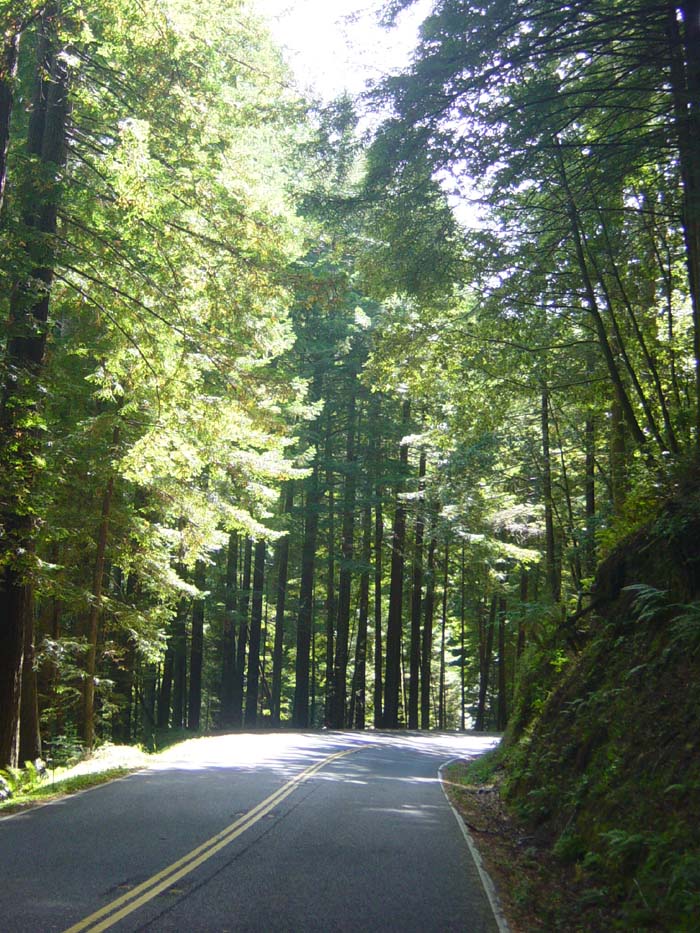 This was taken a couple minutes later, looking back at a section of hill I just climbed, as well as the thick forest all around. Again, note the low speed limit on the tight turns. 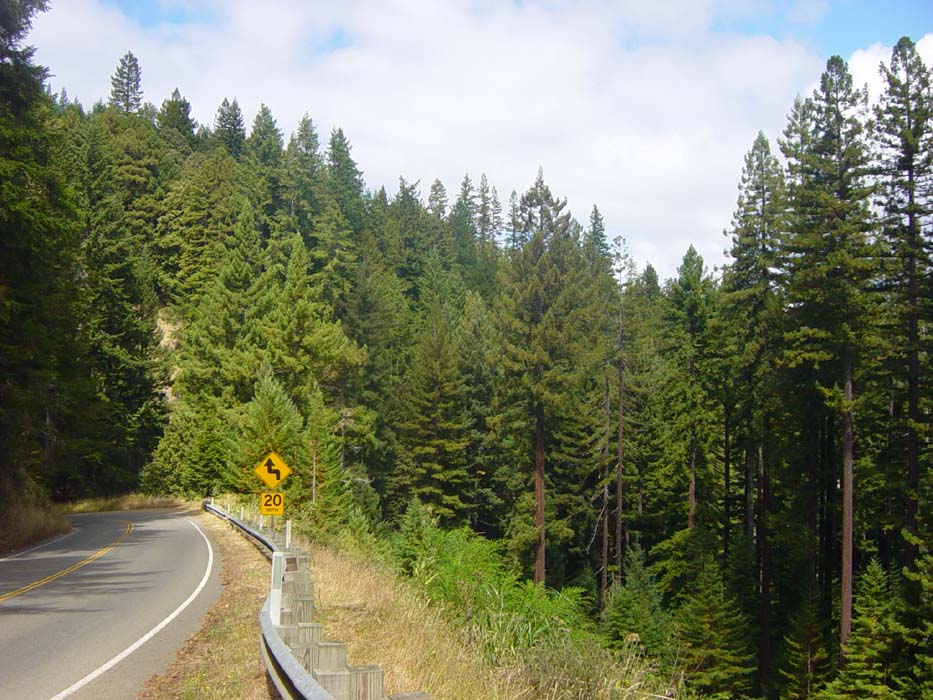 Finally I started descending the other side towards the ocean, which I haven't seen in days, and here's another shot of the mist lingering around the treetops near the coast. This doesn't bode well, either. I've seen fog like that before during an approach to the ocean and I know what that means. 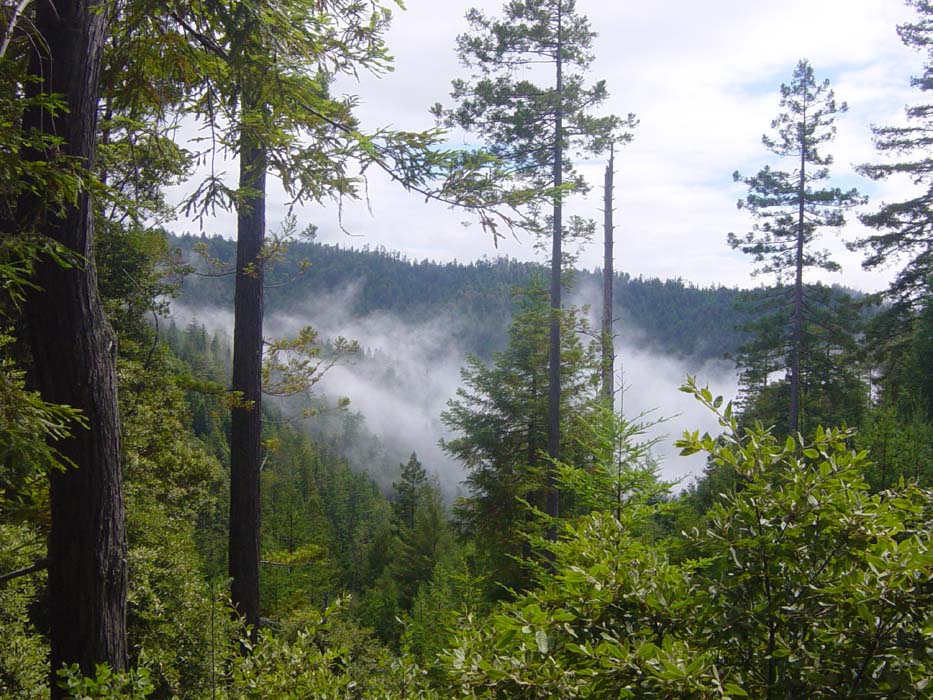 Yep, as soon as I reach the coast, here's what I got. Oh and the temperature dropped at least another 5 degrees so now I'm riding along in my soaked clothes under my jacket into a chill wind. There's no way to get dried off so all I can do is keep going so my circulation keeps up and I don't get hypothermia. 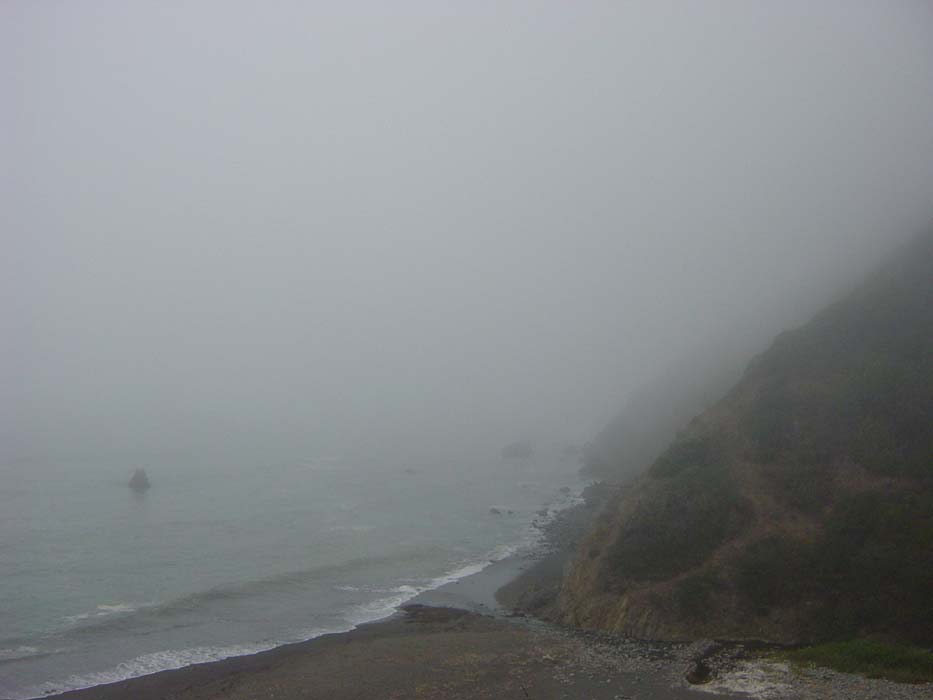 I'm sure this would've been really pretty if I could've actually seen it. 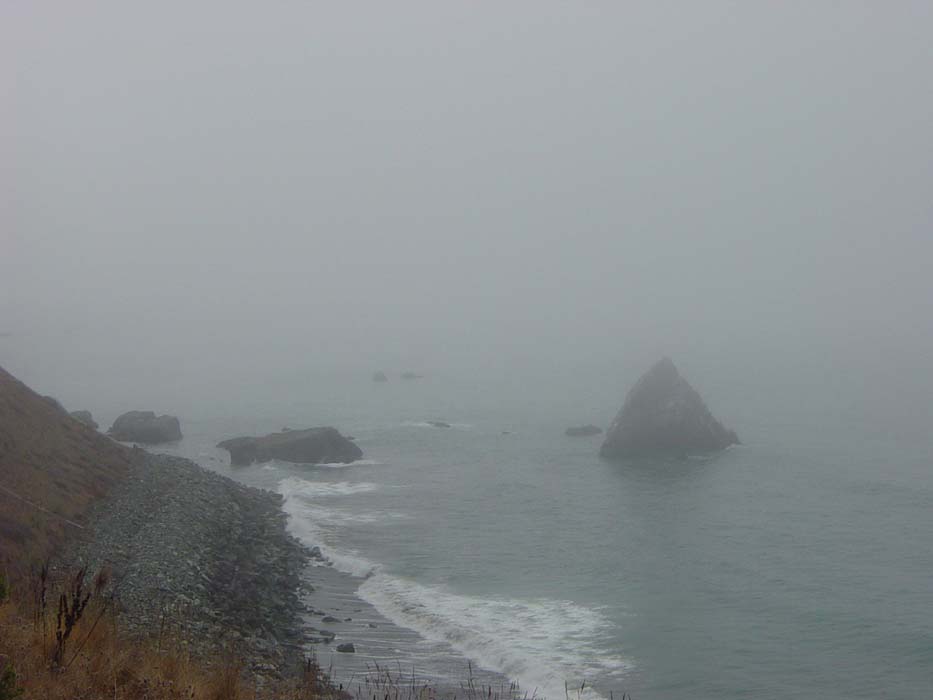 Here's a close-up of that triangular rock there, which actually had a hole through it once I got around to the correct angle. 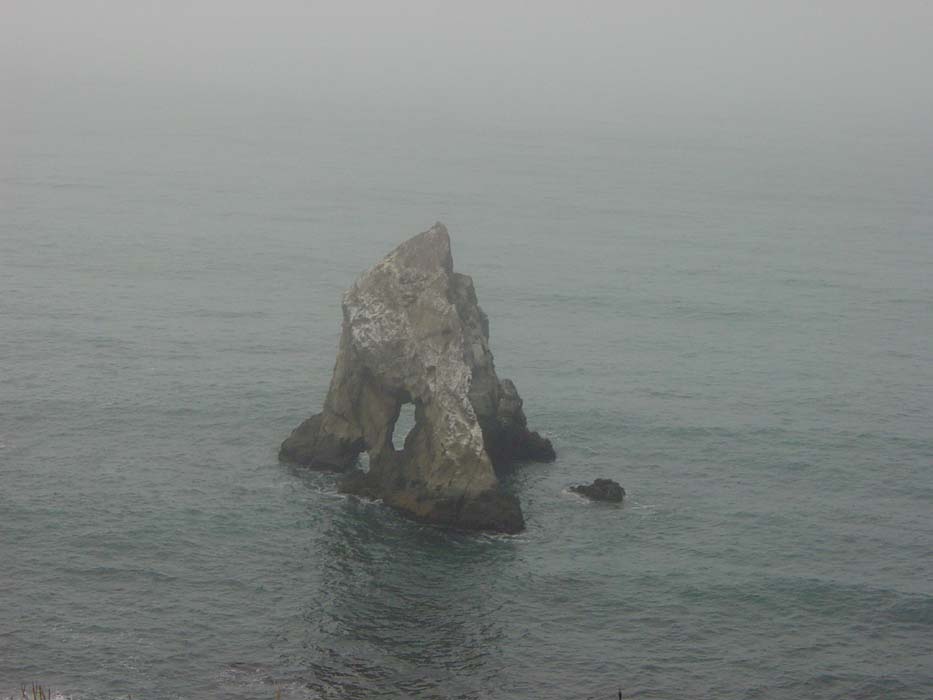 Hmm, could the fog be lifting? I can actually see a good portion of the coast now. 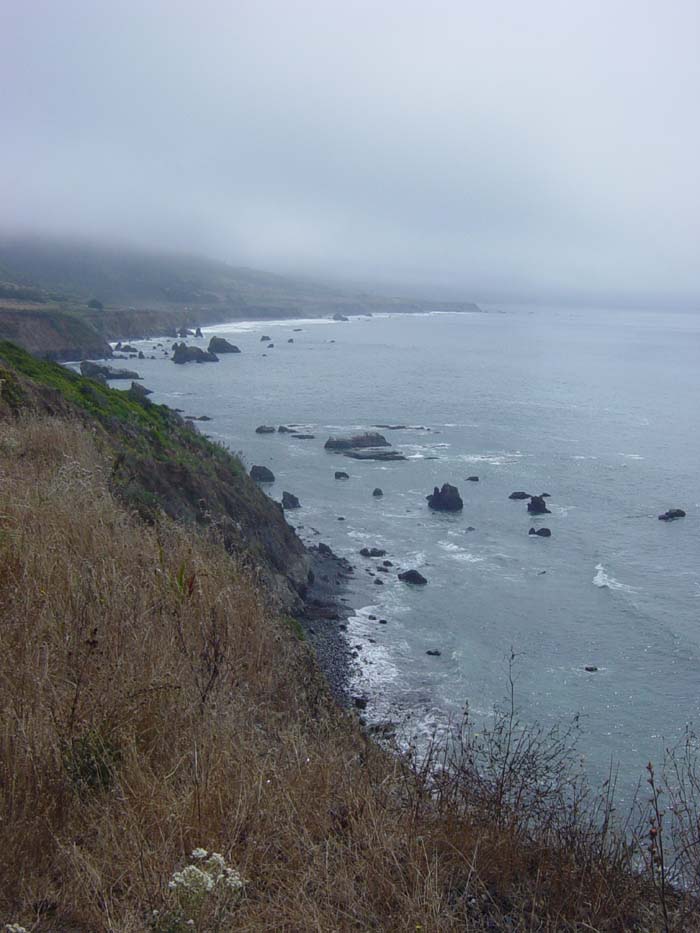 Nope, it's back. Sigh. Another nice view wasted. By the way, the coastal ride was just as hard as the earlier section of road, seeing as it basically meandered up and down along every hill and ravine I went through. Most of the time I was either descending at breakneck speed or grinding my way up another half-mile or mile-long 7% grade climb. At the 30 mile point I came to a small town, got a drink and refilled my water, and basically thought very seriously about quitting for the day. There were no hotels, though, and it's way too cold and wet to camp, so on I went. 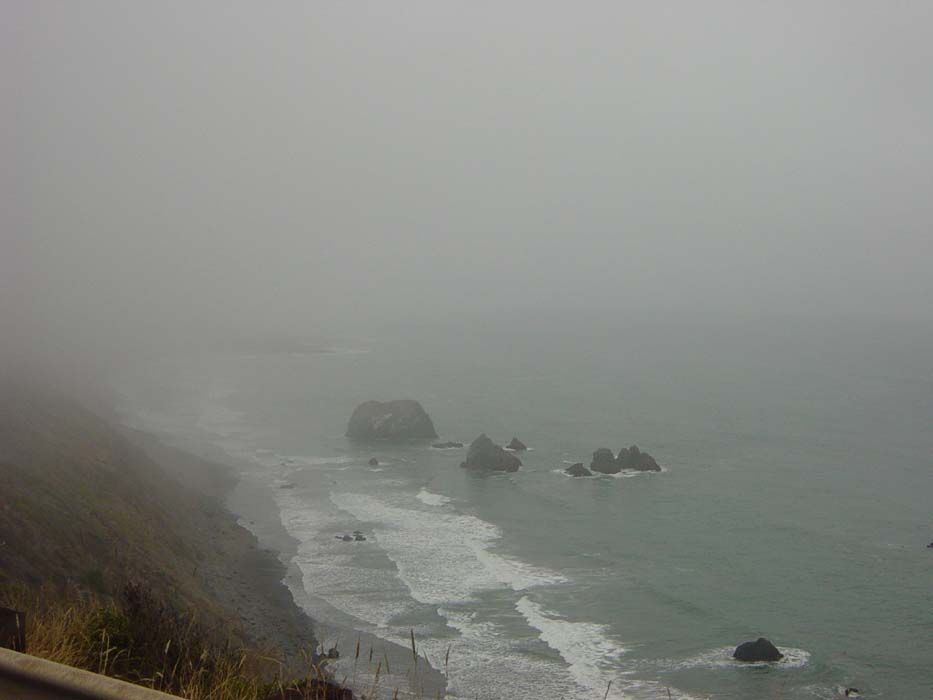 Here's another interesting rock formation off the coast. Shortly after this picture was taken, the road veered inward a bit and the hills became only slightly less steep, but still annoying. The wind also lessened somewhat. 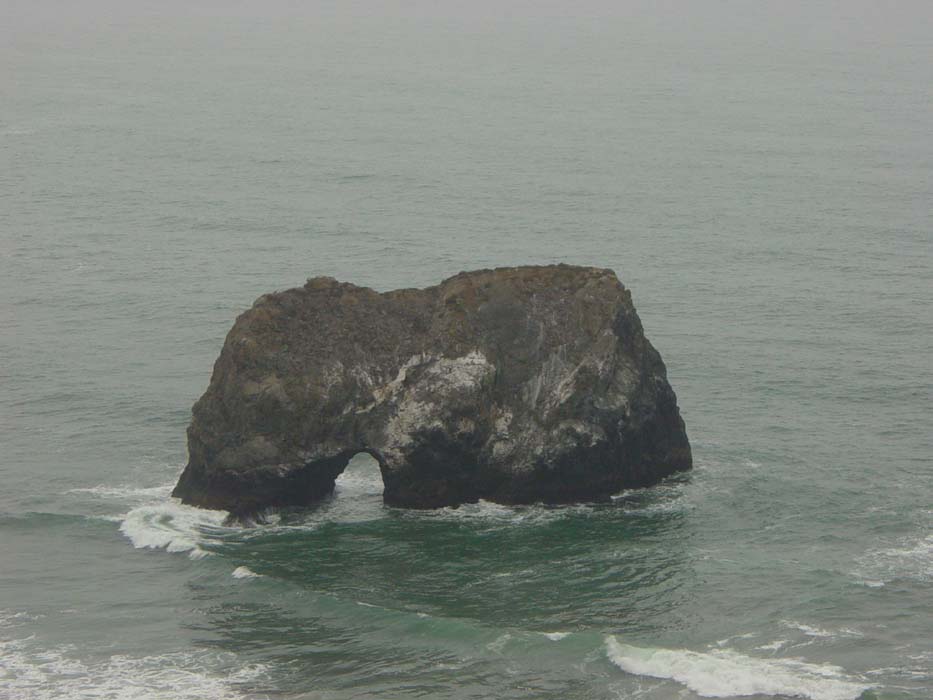 There was one more pass by the coast before the road headed back inland for the remainder of today's ride. Again, I really wish the weather would've been nicer for this. 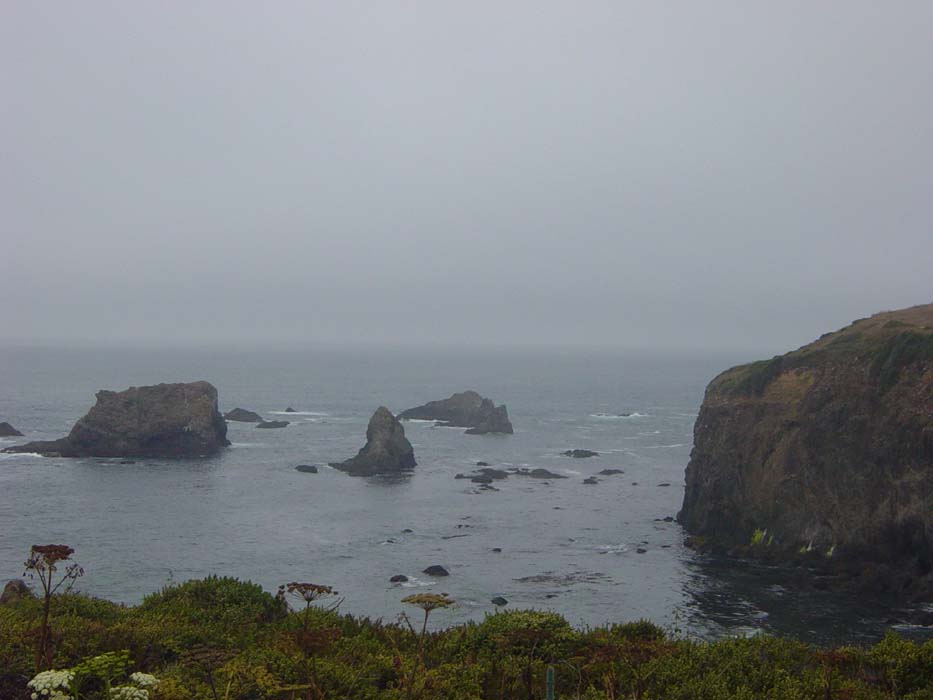 At Fort Bragg, about 45 miles of total riding for the day, I got some lunch (finally) and weighed my options. The wind had shifted by now and wasn't a factor any more, but I was soaked and freezing and the weather was supposed to turn to rain later on, which would've been really bad. Furthermore, the next town with hotels, Mendecino, was a tourist town where (according to locals) the price for a night's stay would've been a minimum of $150. There was a campground there...but no, not in this weather. The only other choice I had was to try to make another 30 miles to another beach town and pray for a reasonable hotel, but it was already 4:30pm and if the roads were as hilly as they had been all day, I'd only barely make it before sundown. So I chose to stop and hunt for a room. Fortunately there was a nice one for only $45 a night, far better than what I was likely to get if I rode on. Oh, and their room heater was able to completely dry out all my clothes before dinnertime, so I was able to tack on another few miles to the day's ride by heading out for soda and a calzone at a local Pizza Factory. On the way back to the room, I got this sunset shot to close out the day. 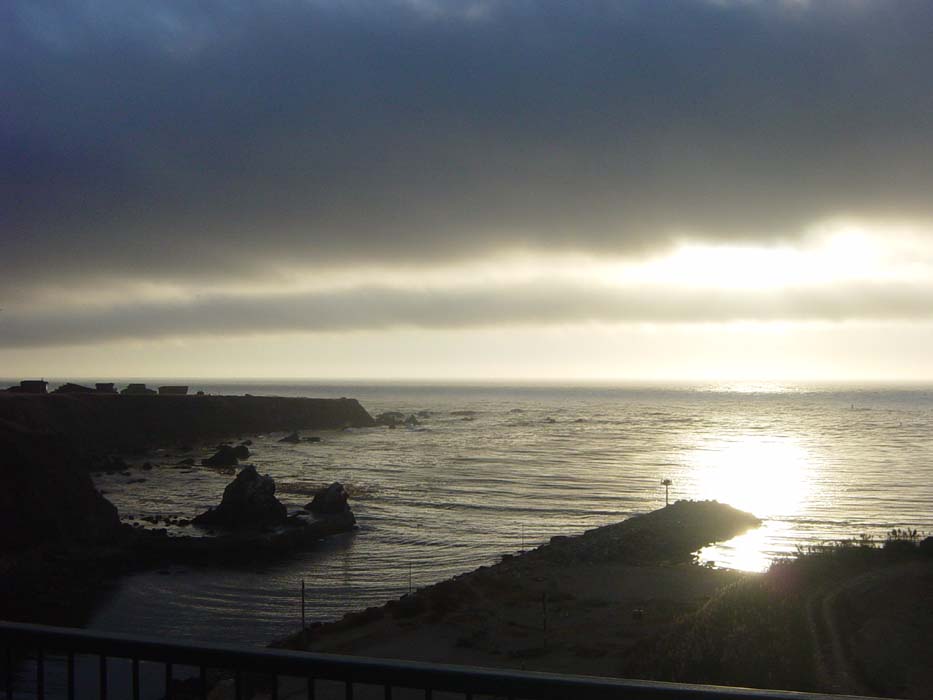 Tomorrow, according to the weather report, it will be cold again (top temperature 53 degrees) but at least it should be sunny. I'm about 180 miles from San Francisco, so I'm going to aim for 60 miles per day until I reach the bay area on Saturday night.