Today was supposed to be cold, but the sun stayed out most of the time so it really wasn't all that bad. I started off the morning with my jacket on, but figured out fairly quickly I didn't really need it. There was a bike shop in town (the first one I've seen in quite a while) so I was able to get my tires pumped up to proper levels, and off I went. There was some fog early on so I couldn't see much of the coast for the first 5 miles or so, which were graciously flat. Unfortunately, these would be the only flat miles I'd have all day. Here's what things looked like early: 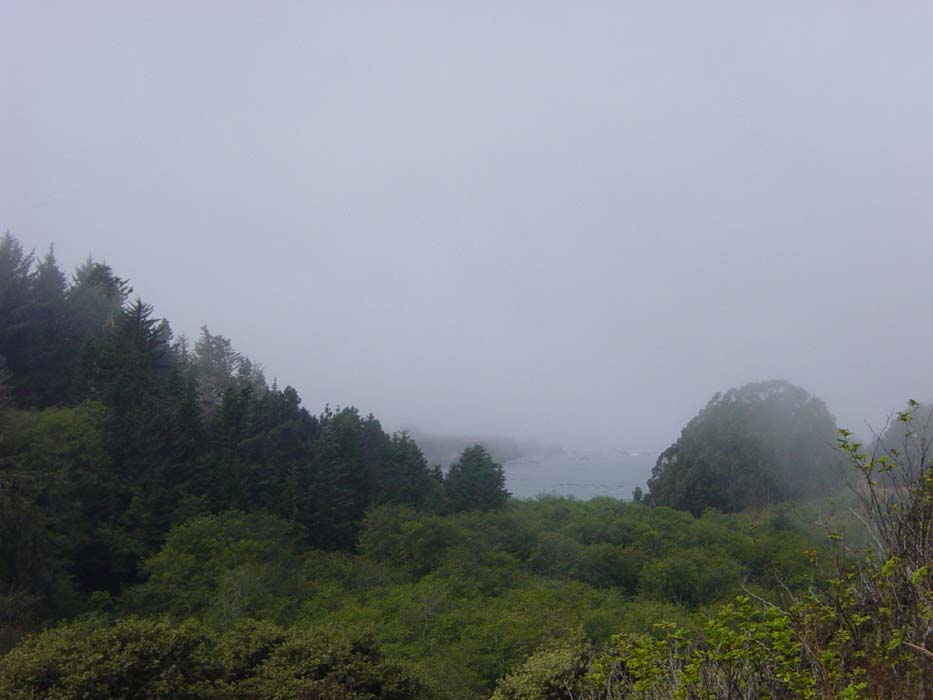 The sun came out shortly after this and the hill climbing began. Now, these weren't long, arduous nightmare hills like the last couple of days. Oh, no, they were little short things no more than a quarter to a half mile (except for a few exceptions). The problem is they were everywhere. One after another, on and on. At least I had the (faint) wind behind me most of the time, and of course some decent views to console my aching muscles. 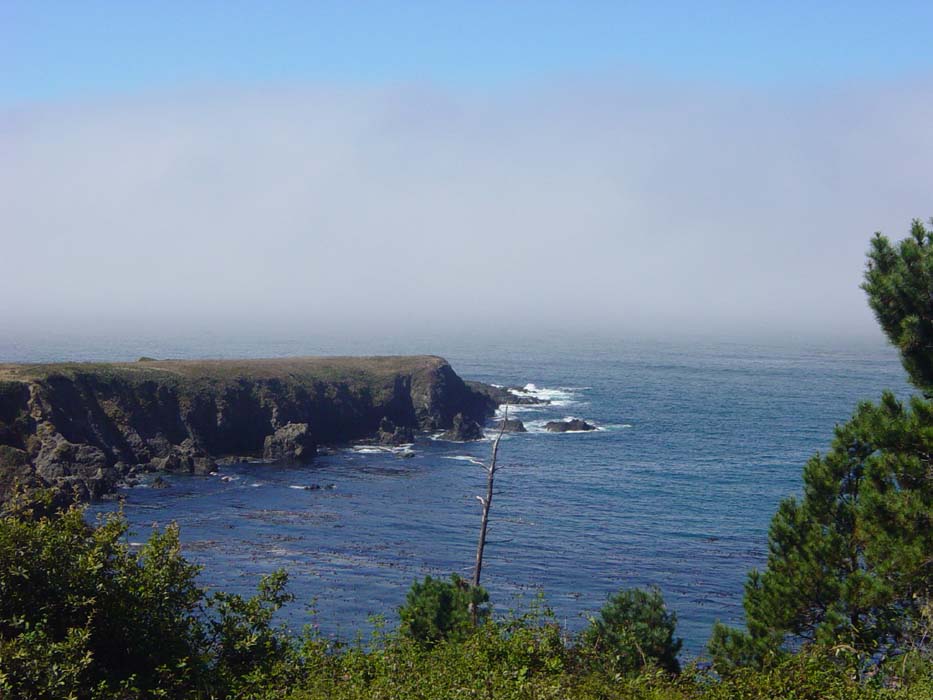 Here's a couple more photo opportunities from early on. 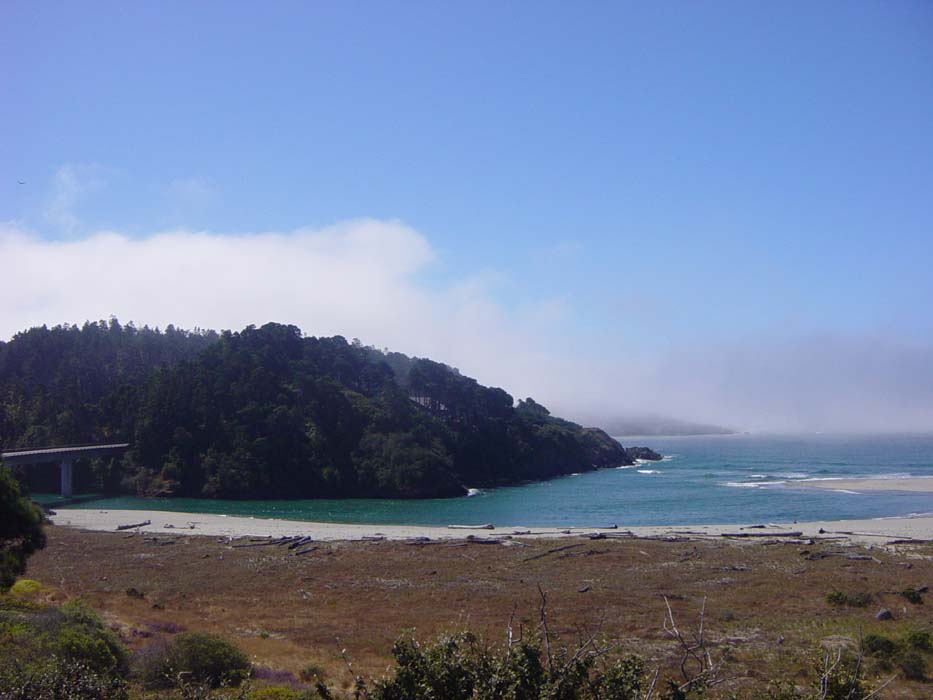 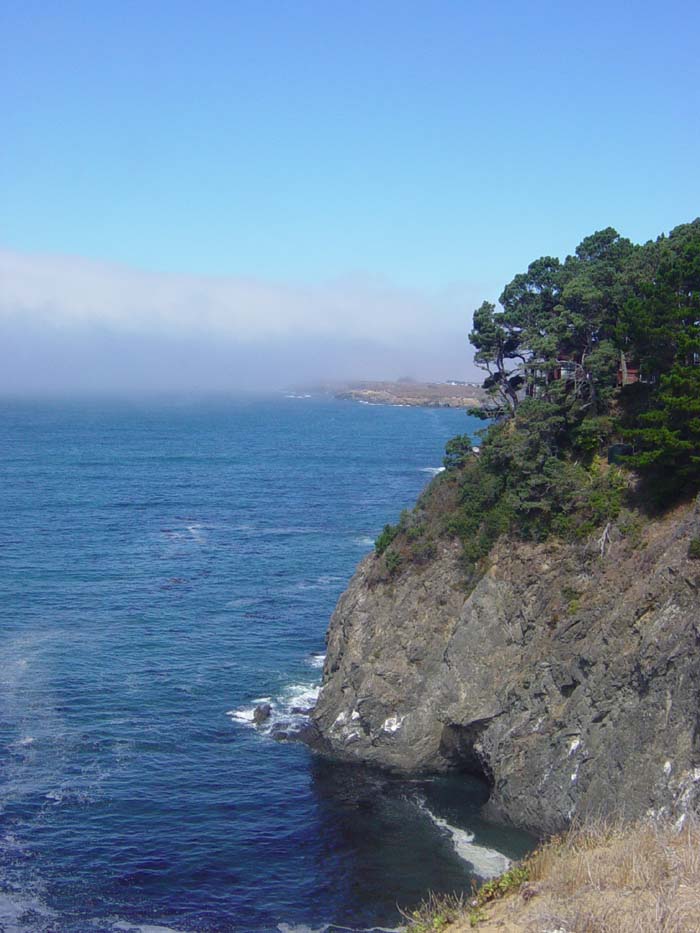 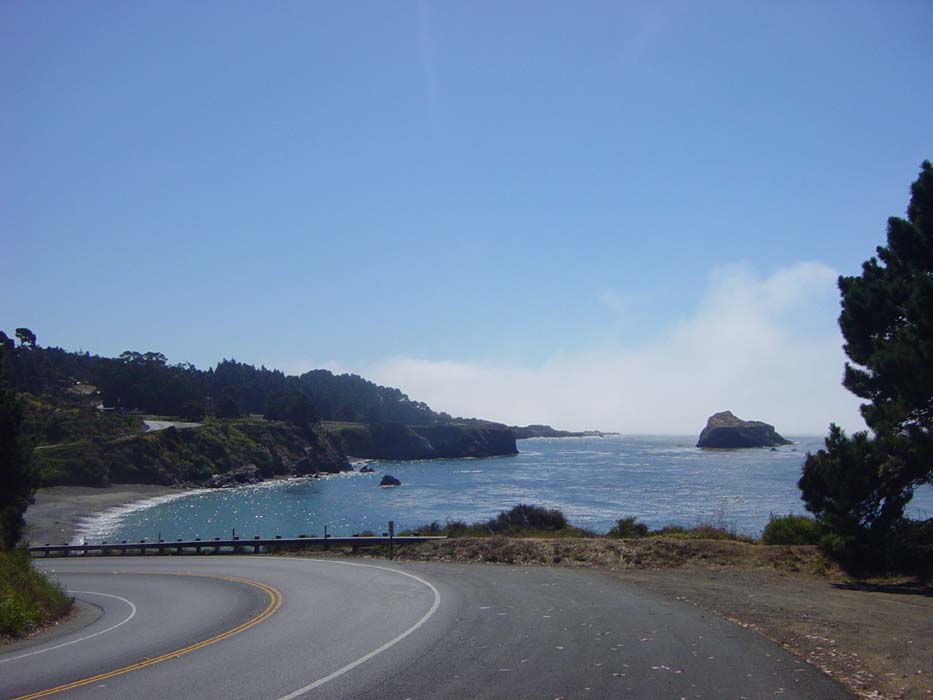 Keep in mind every time I descended down to near the water level, there was always a steep climb back up and out to the top of the next set of cliffs. I grew to dread the sight of any sort of bay or inlet up ahead, or the sign warning of a sharp curve left (which would mean a quick drop ending at a hairpin turn back to the right and up again). Here's a good example. Note the road meandering up the side of the cliff there. I'd be on that soon enough. 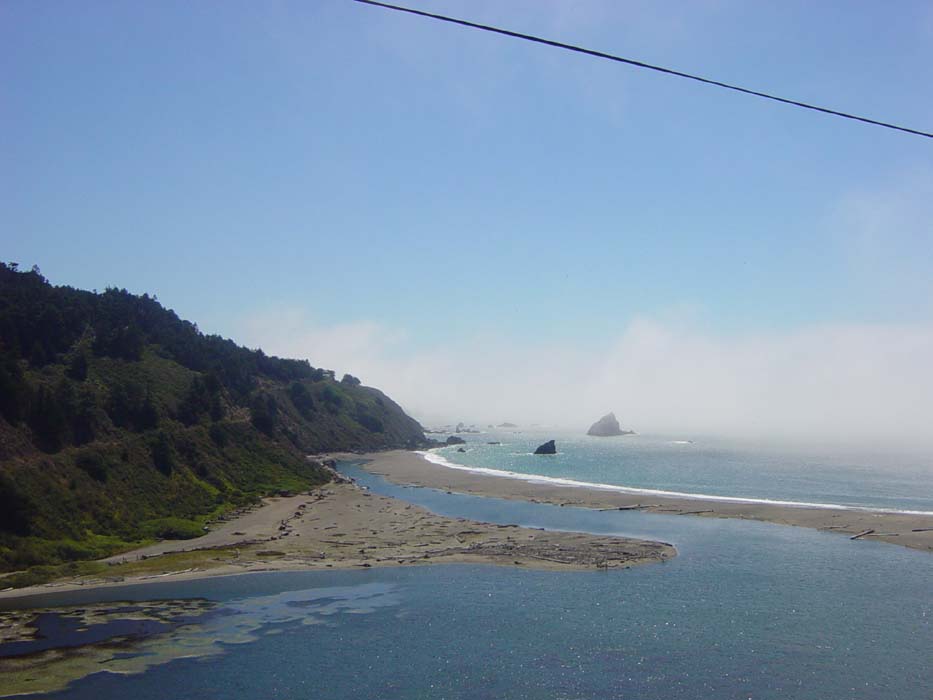 It was worth the pain for the view to follow... 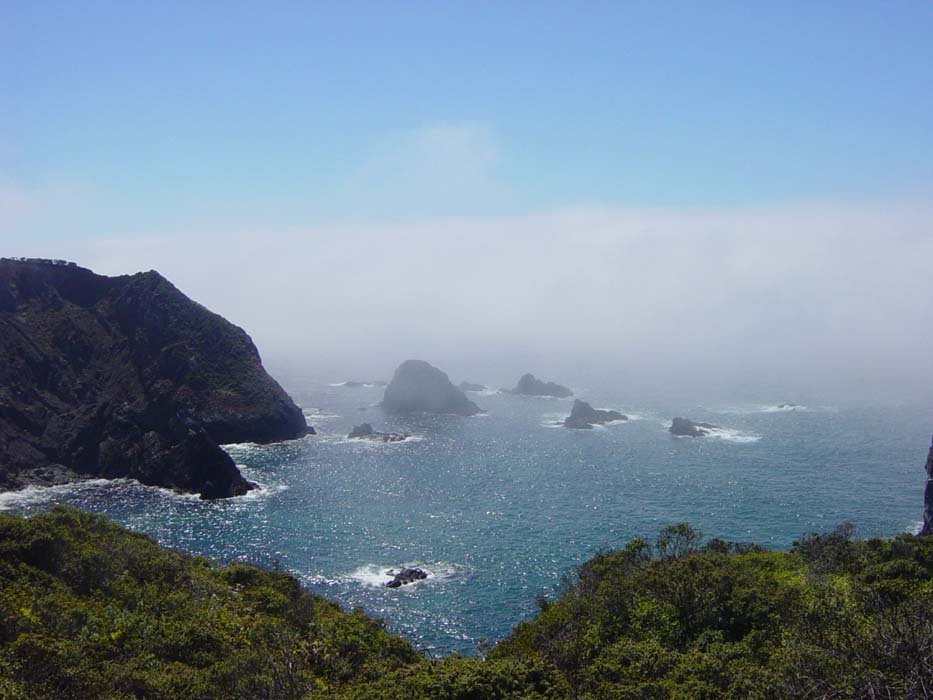 Here's another one shortly thereafter. 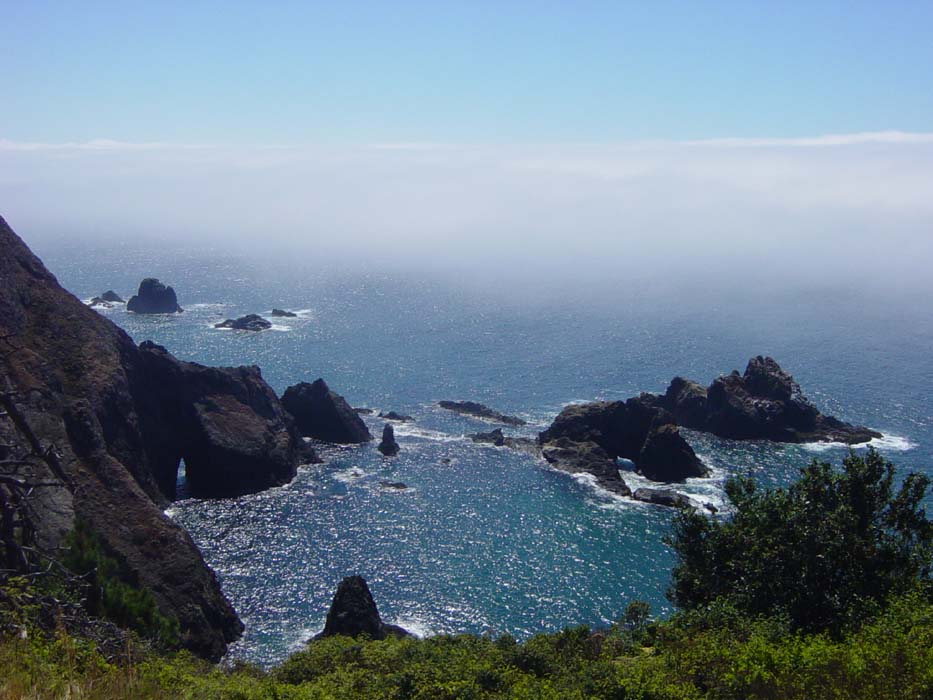 Keep in mind that while these views seemed endless, I did ride past quite a bit of boring areas slightly inland without a view of the sea. However, I won't trouble you with pictures of those. 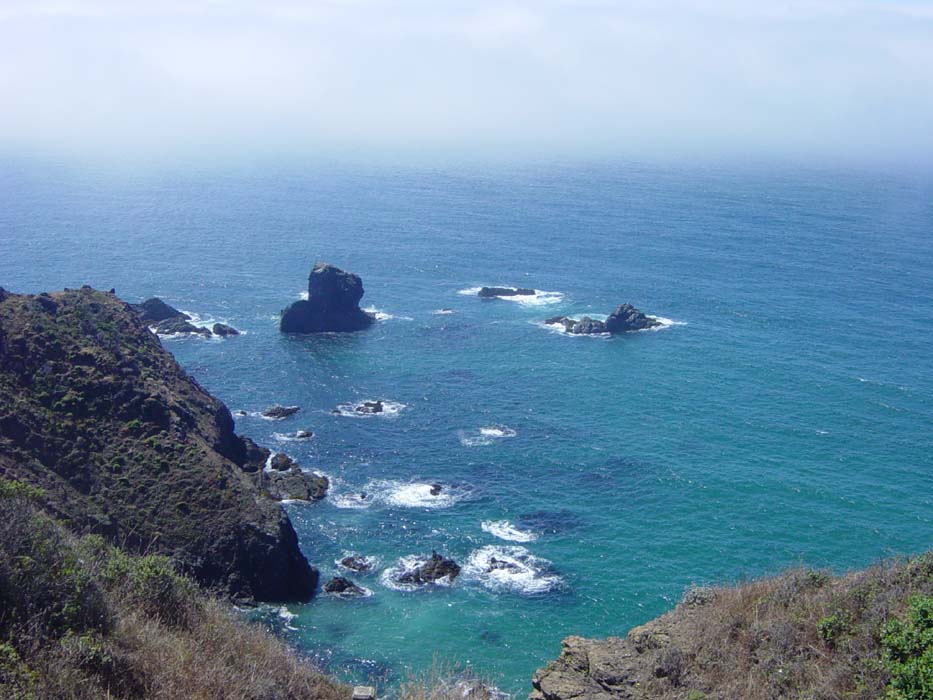 There were a couple of spots where the fog was blowing in over the ocean, like this picture here, and as I got further down the road it was literally rolling right over me. It felt like I could actually see the wind. 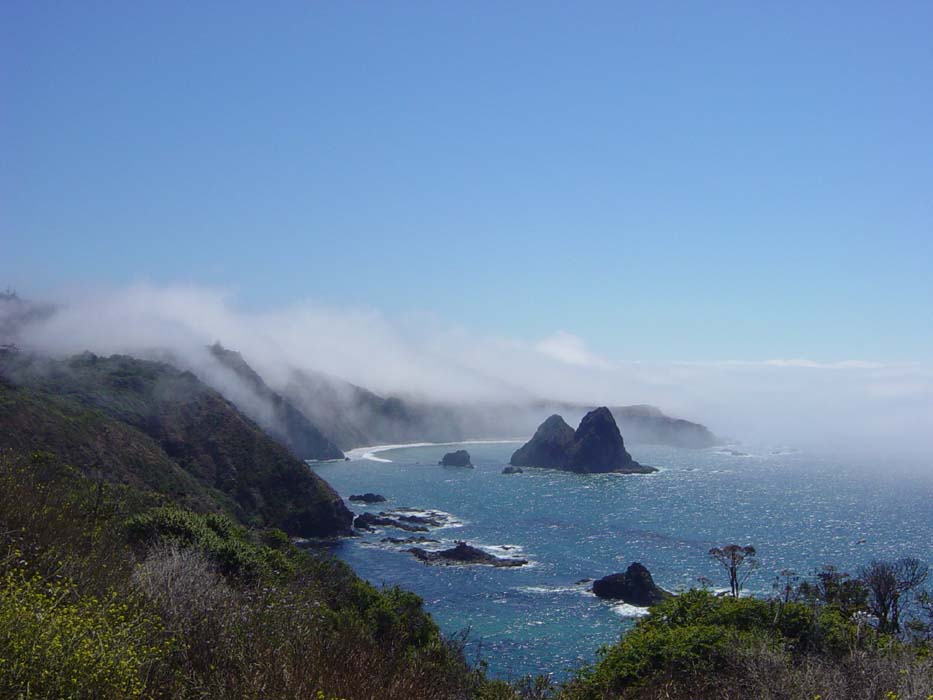 Most of the day the fog wasn't really an issue, but sometimes it lingered long enough to ruin an otherwise promising shot. 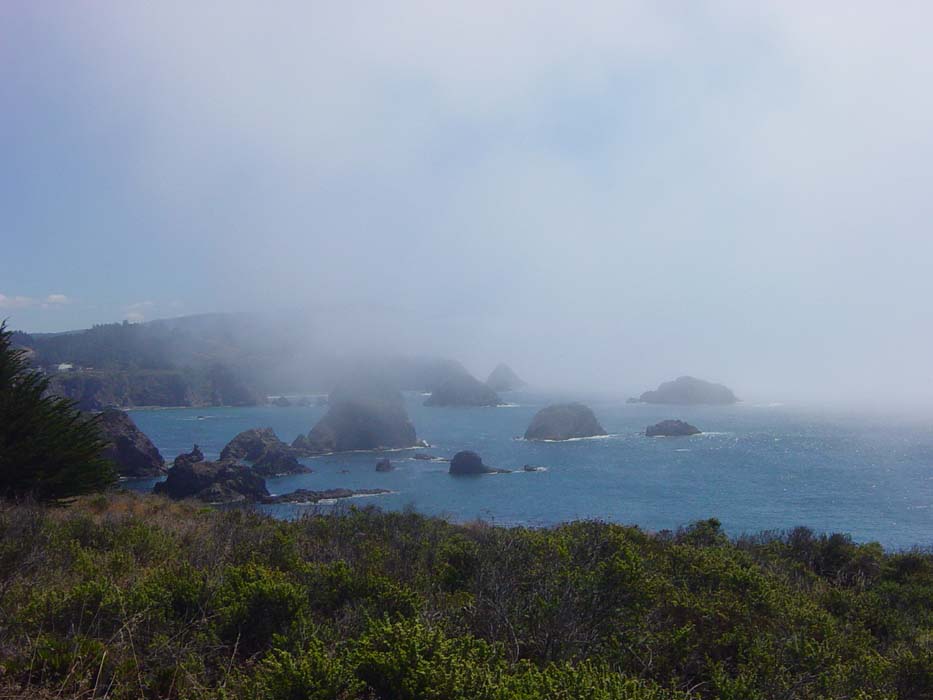 But then it would be gone around the next corner. 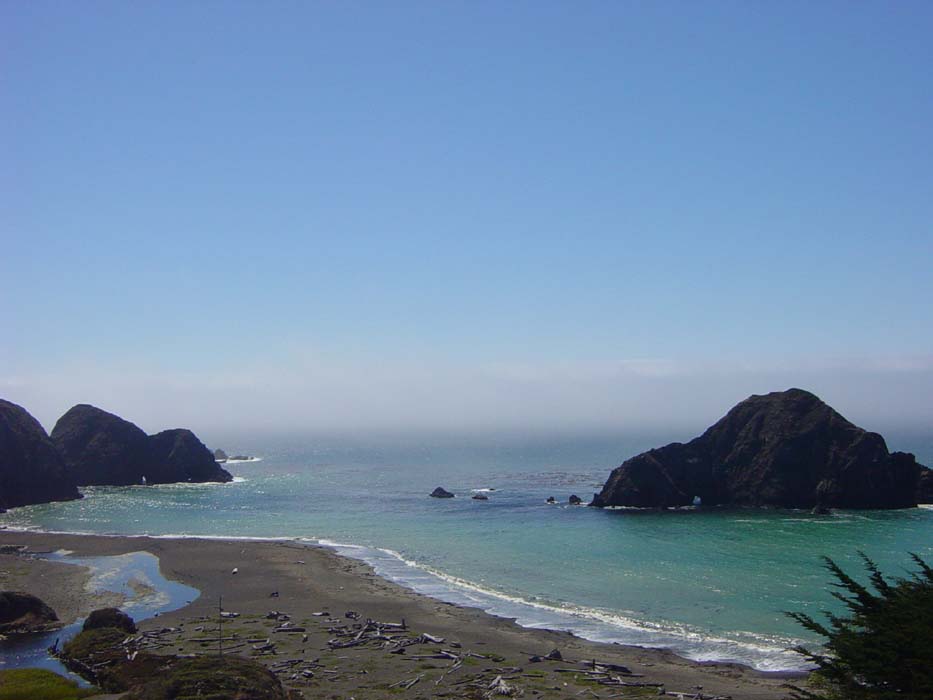 This is some of what the terrain looked like ahead of me, although much of the time it wasn't as green (often it was this ugly brown stuff that looked like it wasn't getting enough water, although how that's possible, I have no idea). Oh, and notice again the road I'm on is breaking left, then wayyyyy up there in the right center you can see where I wind up finishing the climb out of that ravine. Ouchie. 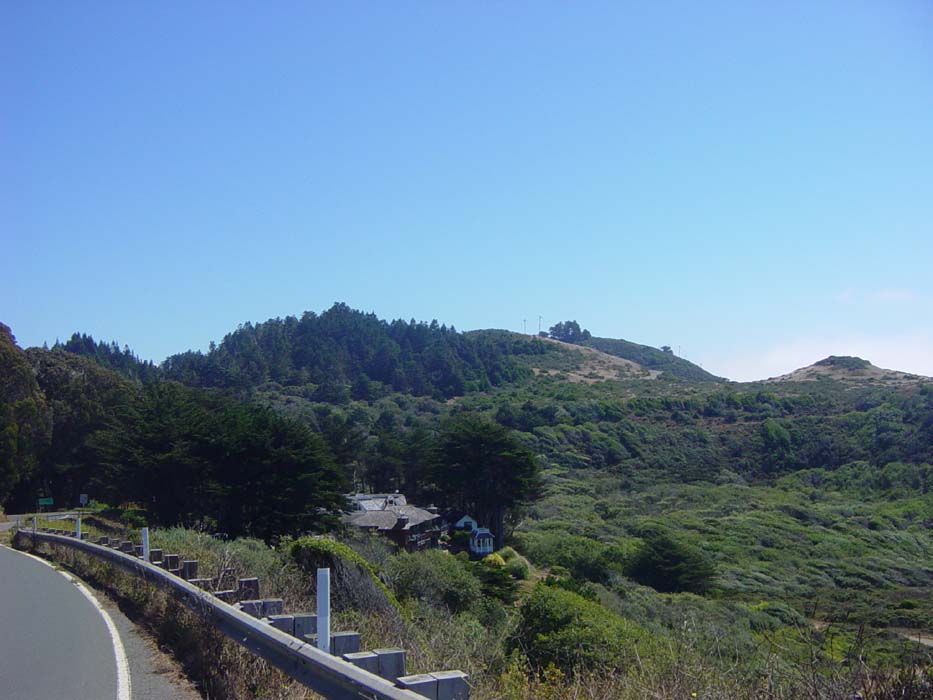 But again, the height wasn't without its rewards. 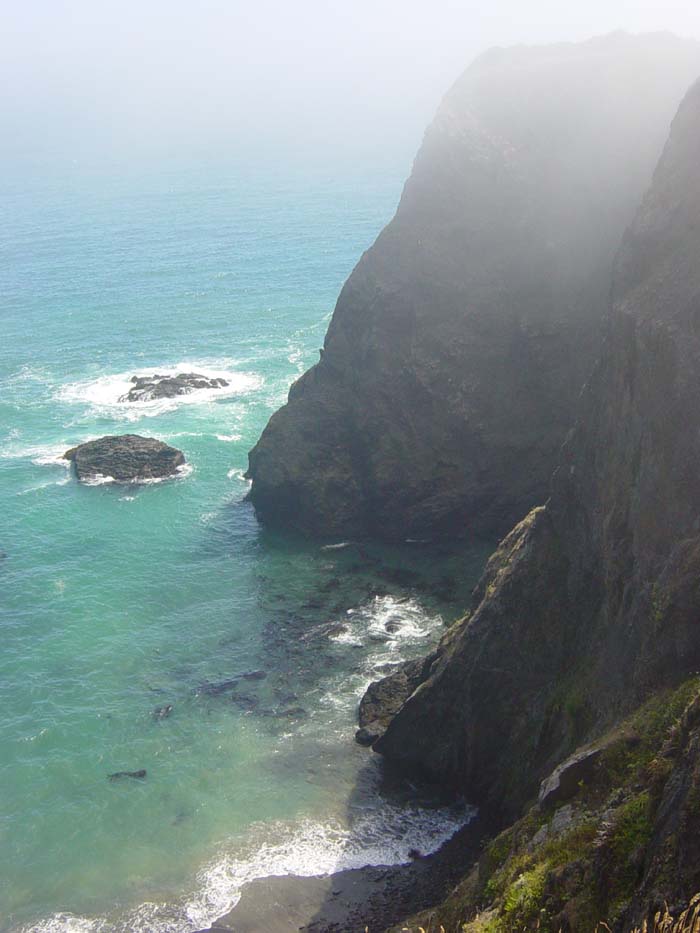 I know I keep saying this, but I really wonder how much a house with that kind of view costs? 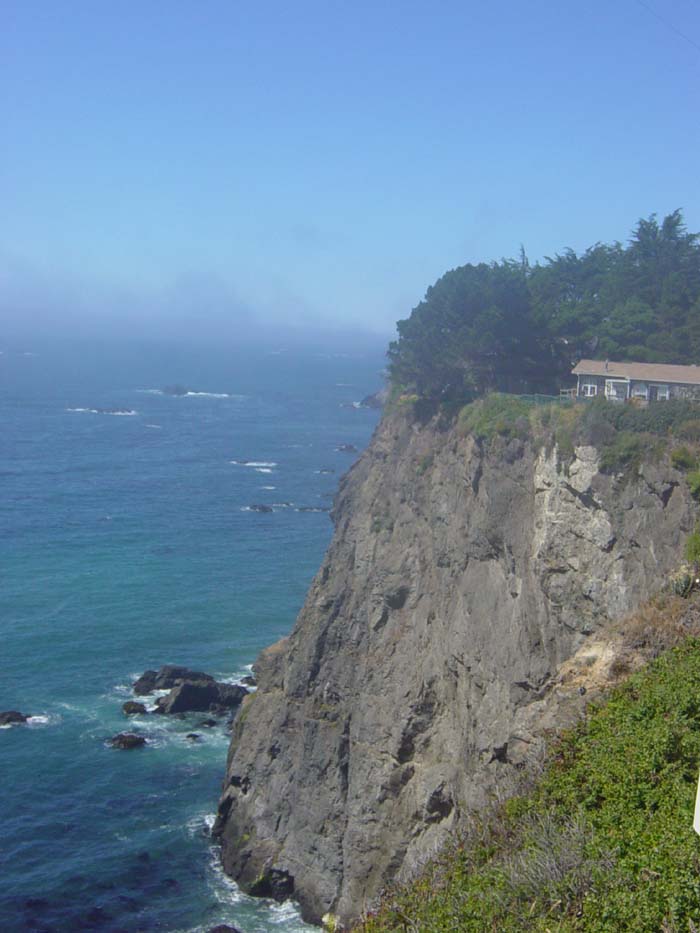 Ah, now we come to the most painful part of the day. About halfway through the ride I came up on this horrific sight, a multiple switchback death climb heading up the side of a steep hill. This was by far the steepest climb I've had to do the entire ride so far. The only thing keeping it from being the worst climb of the trip was that it didn't drag on and on like a few of the others. I doubt it was more than a mile, actually, but it was incredibly steep and there was no shoulder anywhere, so all I could do was sweep back and forth across my lane (so as to lessen the grade) and stop whenever a car came along. Also, at the corners, it was impossibly steep...there was no climbing there, I had no choice but to push. Even pushing was a struggle, quite honestly. 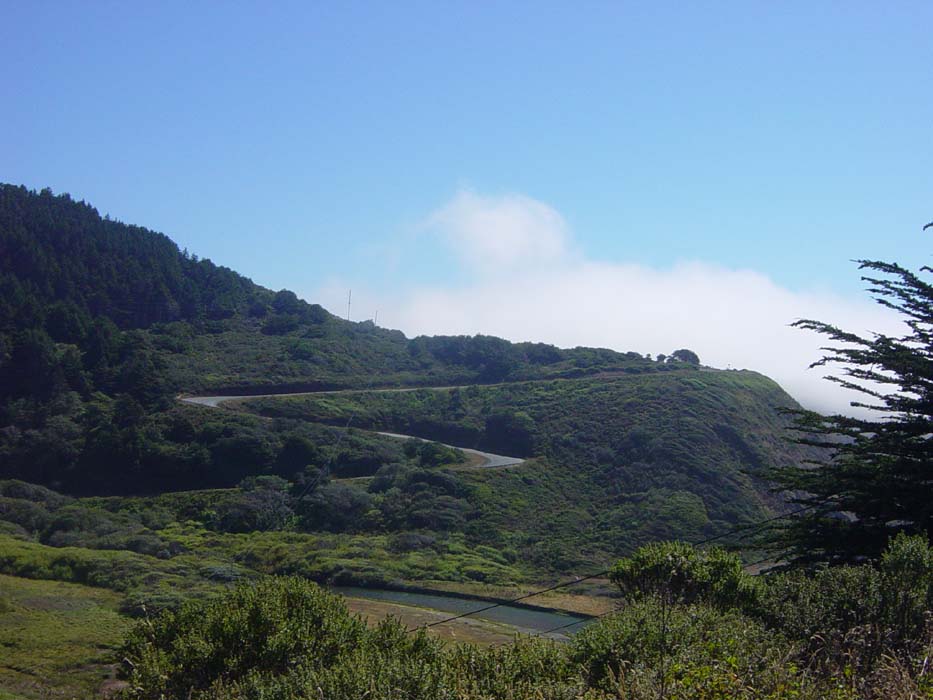 Fortunately this turned out to be the worst climb of the day, as nothing else was nearly as steep. Here's a shot looking back from the top. 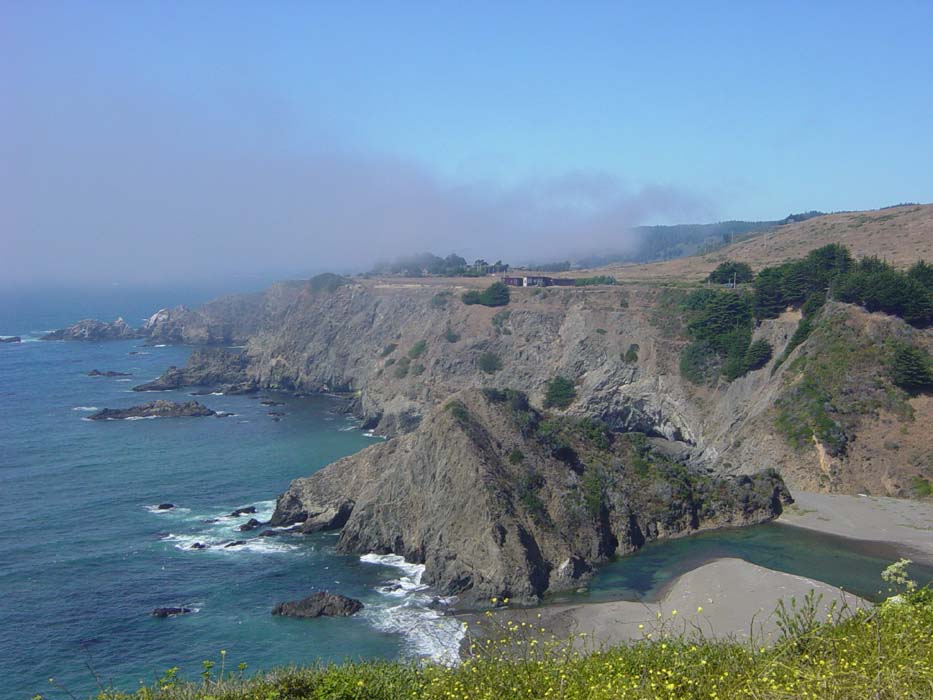 Moving on, the road went back to its previous pattern of short descents and climbs, with almost no level sections at all. Only the views and the wind made the going less painful. Here are some more pics. 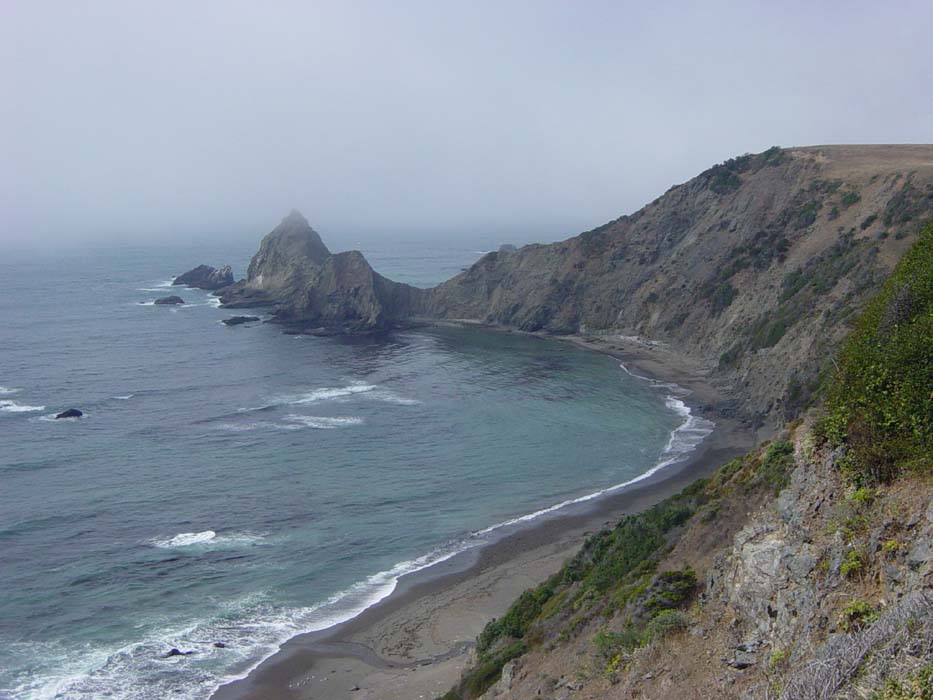 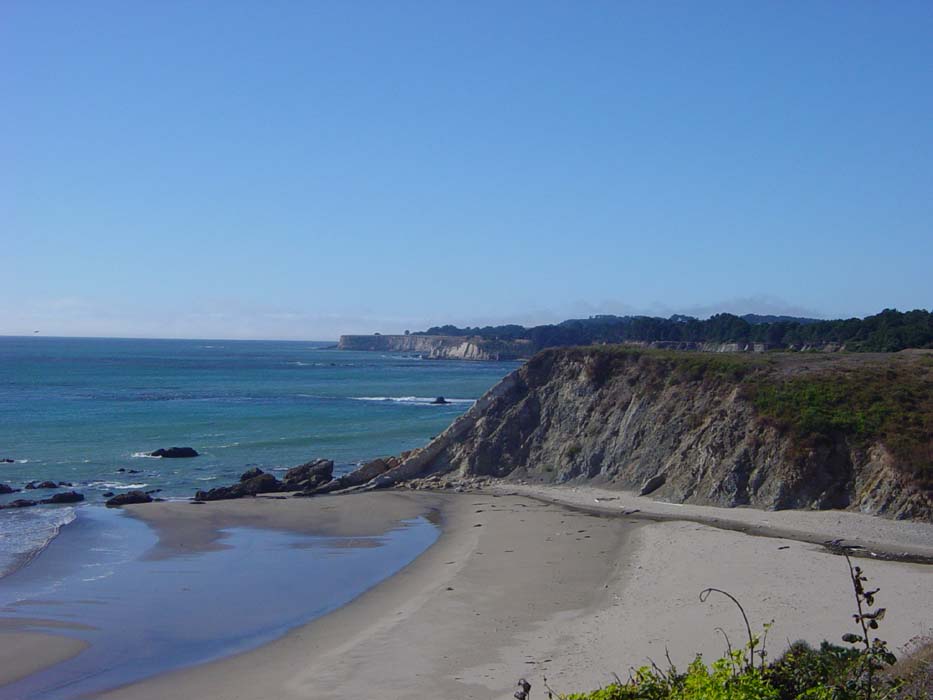 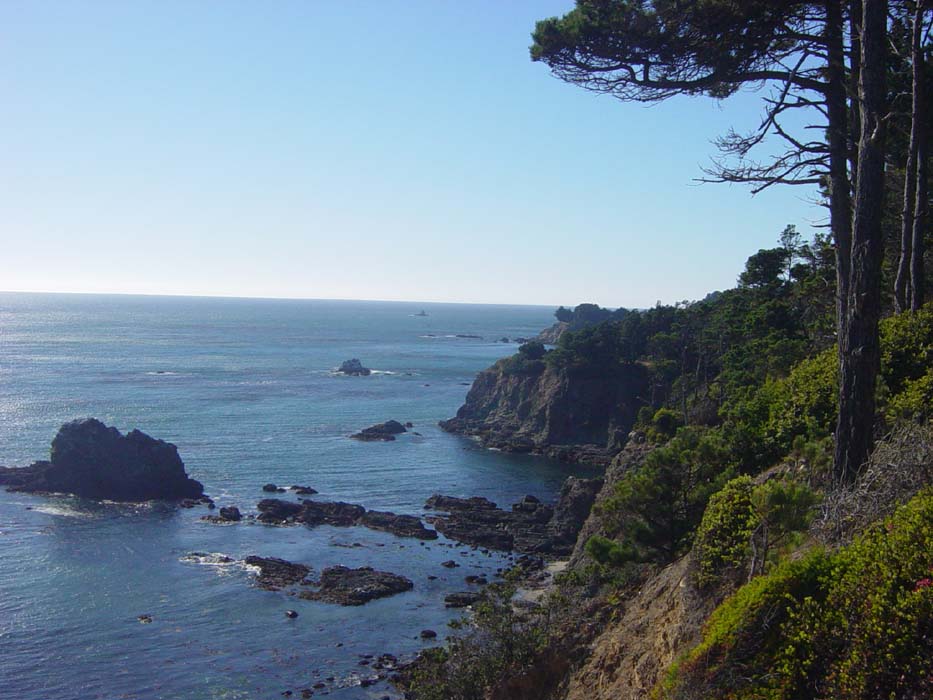 Eventually, I found myself in Gualala, pronounced "wa-la-la," a touristy beach town with a view something like this. 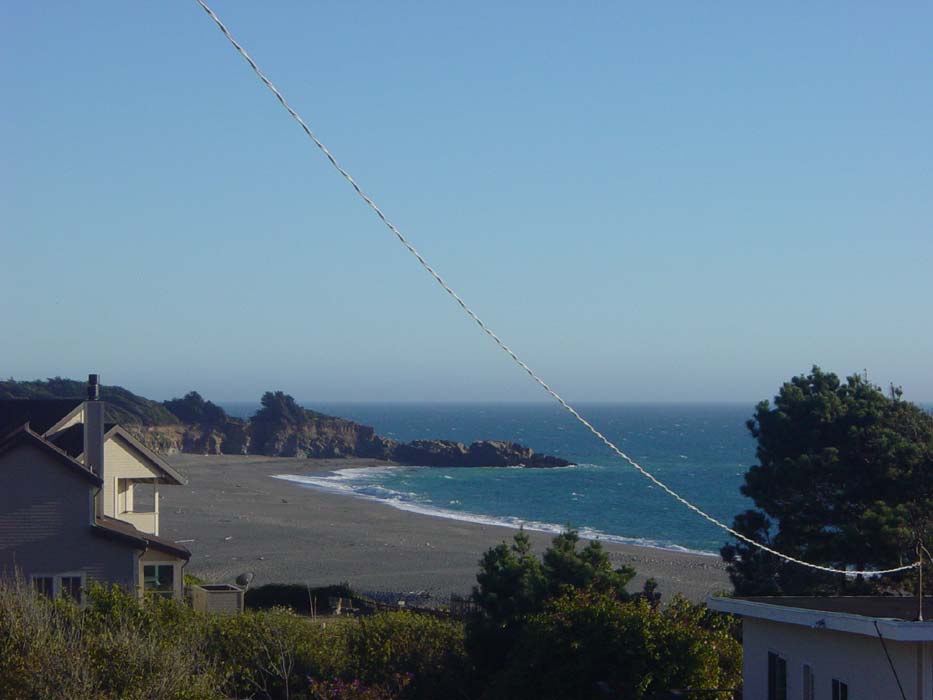 Unfortunately, the hotels were all very expensive, but when I mentioned that I'd head off to the nearest campground, one of the owners let me have a room for their winter rate, rather than leave the room empty for the night. $75 was still pretty steep for a hotel by my account, but it's pretty luxurious. Plus, it's the first place I've found with an actual direct line to the Internet instead of wireless. Oh, and they have a full breakfast in the morning, not just coffee, so I didn't have quite as large a dinner as usual. We'll see how breakfast treats me. Maybe it'll help me get through another day of these torturous climbs.