Before I could even get started today, there was one important order of business, namely, fixing my rear tire. You may recall that I had a disastrous blowout earlier on this trip and I wasn't going to let that happen on a day when I was heading into a very remote area. My poor rear tire has been supporting all the weight of all my camping gear and laptop as well as my own considerable bulk, and even though it was a special heavy-duty tire designed to take that kind of punishment, it had finally worn out. It did get me from Crescent Lake in the Olympic Penninsula of Washington all the way down to here, though, which is a lot of miles. Here's what it looked like right before it was changed out. Notice the worn spots where the lining underneath is showing through, and also the slight irregularity around that one place where the tire's starting to deform. I'm pretty sure this tire was about to go. (Remember, the one that blew out on Crescent Lake gave me no warning whatsoever.) 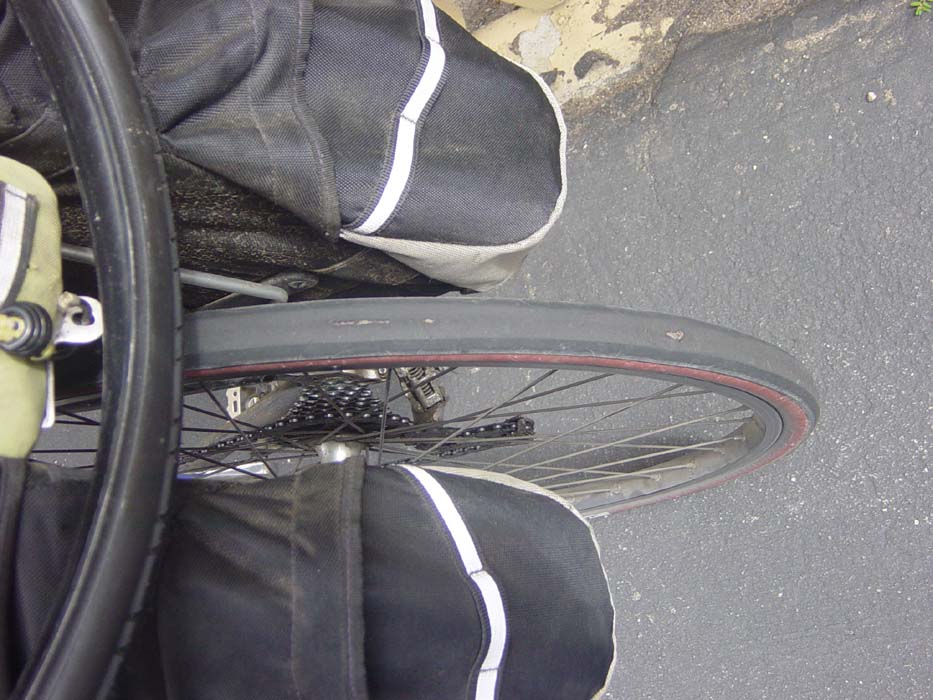 Now, on to today's ride. The tricky part about today was that Big Sur is located about 30 miles from where I was, and the next significant civilization is another 65 miles south of that. Since I knew the coast was going to involve some crazy hill climbing, I had no illusions of making it to the farther one. A 30-mile day seemd pretty weak, and besides, the weather was overcast early but forecast to clear up in the afternoon, so I blew off some time by taking a long leisurely cruise around Monterey Bay on that same bike path I was on yesterday. This would also serve to warm me up for the hill climbing, and also to give me time to get hungry enough to have lunch before heading off onto the coast (where there would be nothing until Big Sur).

Here's a sign I saw along the way. This is another example of the sort of thing you just don't see back in Ohio. 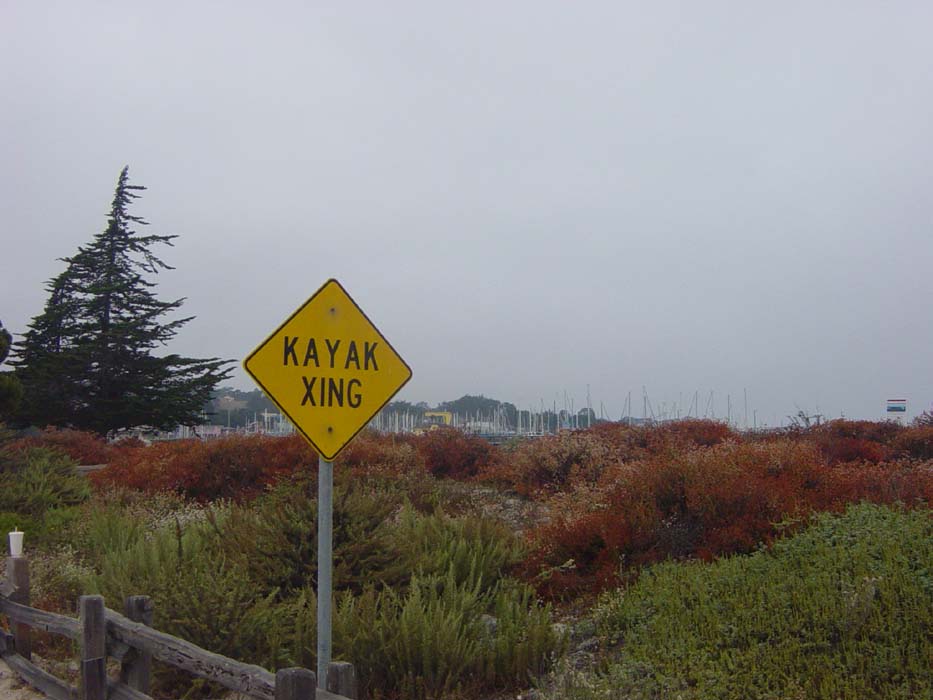 Random Wildlife Sighting: The bay here was home to a family of harbor seals. At first I hought they were big chunks of driftwood, but on closer inspection they are, in fact, alive. The one on the lower right actually looks like a seal, not a beached whale. 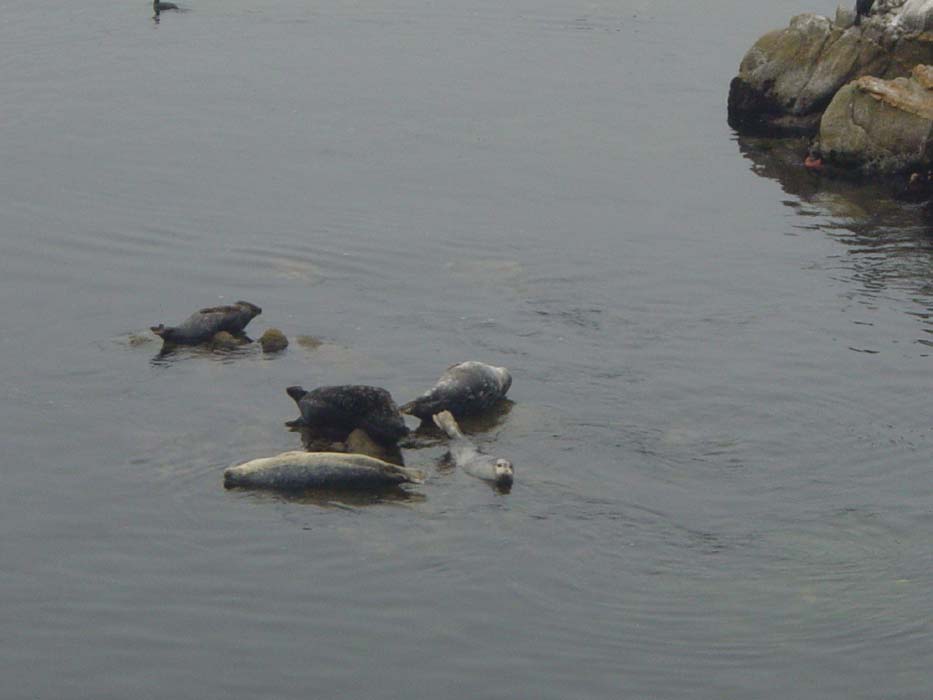 The coastal ride eventually took me past this place, which any golfer has probably heard of. 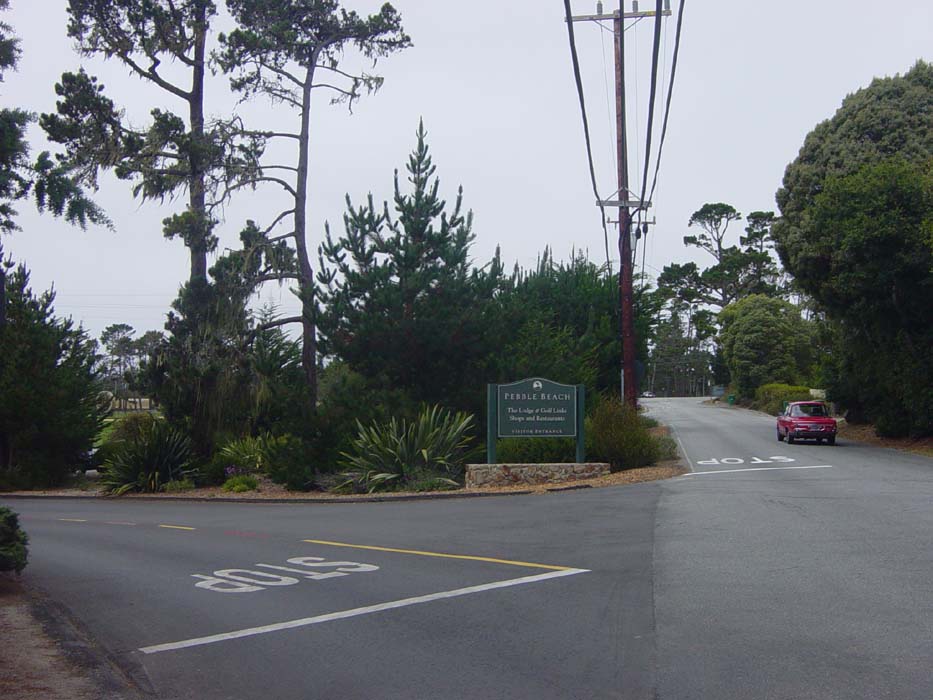 Here's a view looking at part of the course and some of the view the golfers have when playing here. There were also about a dozen other golf courses all around this one. I'm sure it costs a fortune to play on any of them, if the number of BMWs and Mercedes in the parking lots was any indication. 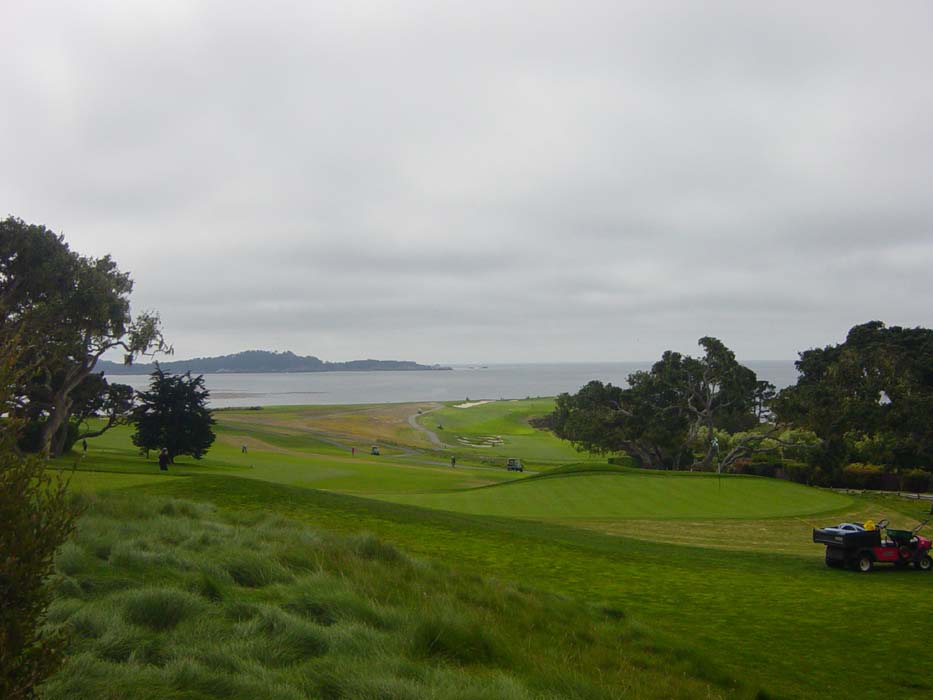 Continuing on past the golfing paradise I entered the town of Carmel (officially Carmel-by-the-sea), which is the place where Clint Eastwood was mayor a few years back. They have a famous mission here, and I took a couple of photos as I passed by. This first one is the left side which is the main buildings of the complex, along with a nice view of the mountain behind it (I'll be riding along the edge of that shortly). Notice it's now sunny, and except for some occasionl fog it'll stay that way the rest of the day. 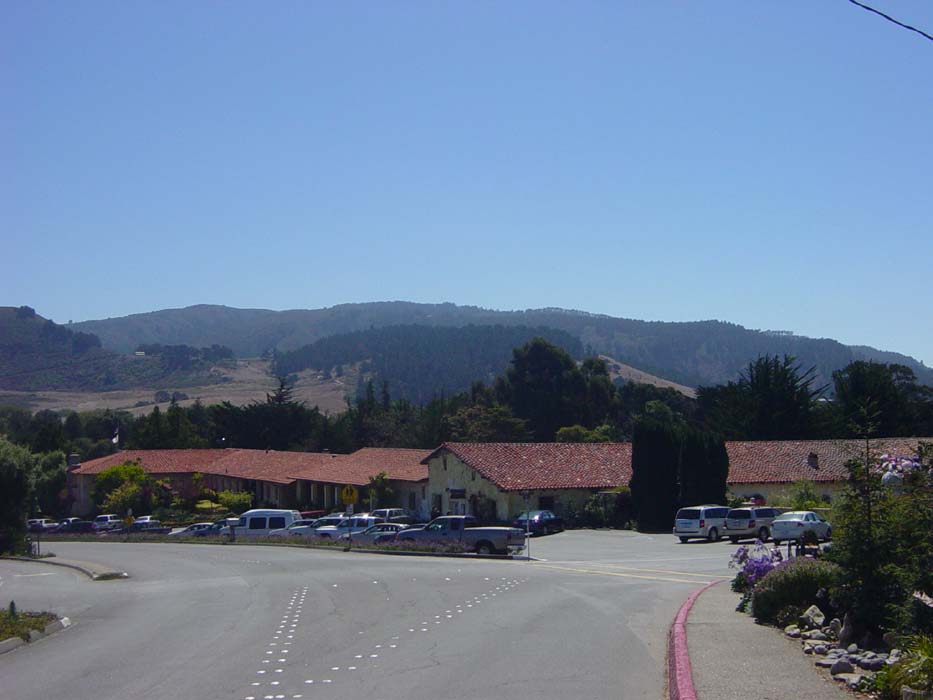 This is the mission itself. I walked around a bit but didn't do the museum tour or anything. This is actually still a functioning church and mass is held regularly. 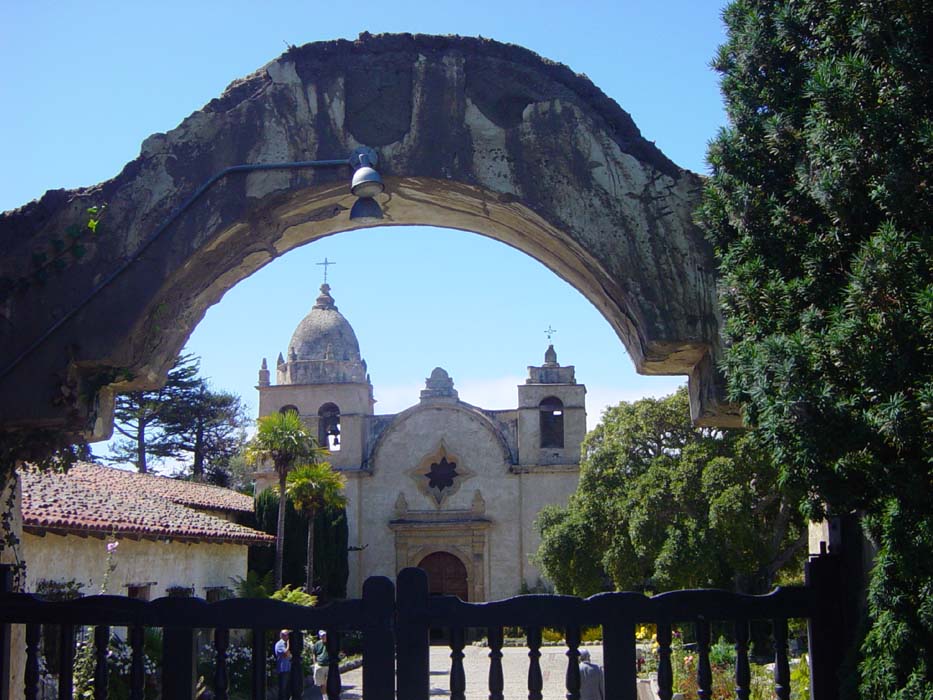 That concluded my tour of Monterey and Carmel, so I stopped for lunch (there are no fast food places here, only expensive restaurants where hamburgers cost $10 and you don't really want to know what a fountain drink costs). Once I paid the tourist tax, I moved on along Route 1, which was finally not a freeway anymore. Here's a picture of the early part of the route, where some fog has come in briefly, but you can see the blue sky past it. 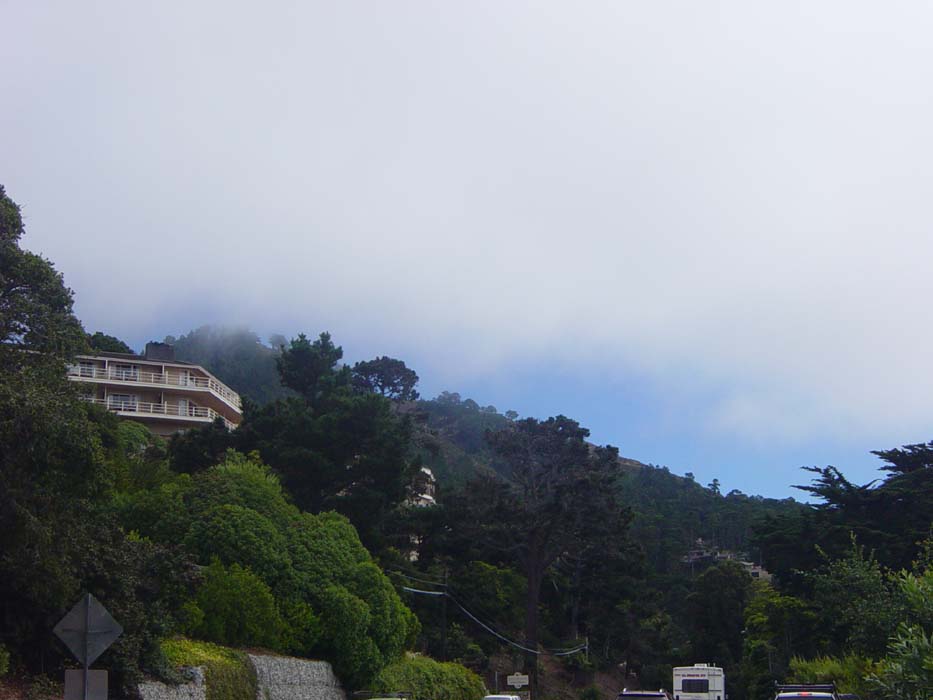 I was told the Route 1 drive along this coast has some of the most beautiful scenery in the world. We'll just see about that. Here's my first view of the coast coming up, through this gap in the hills. 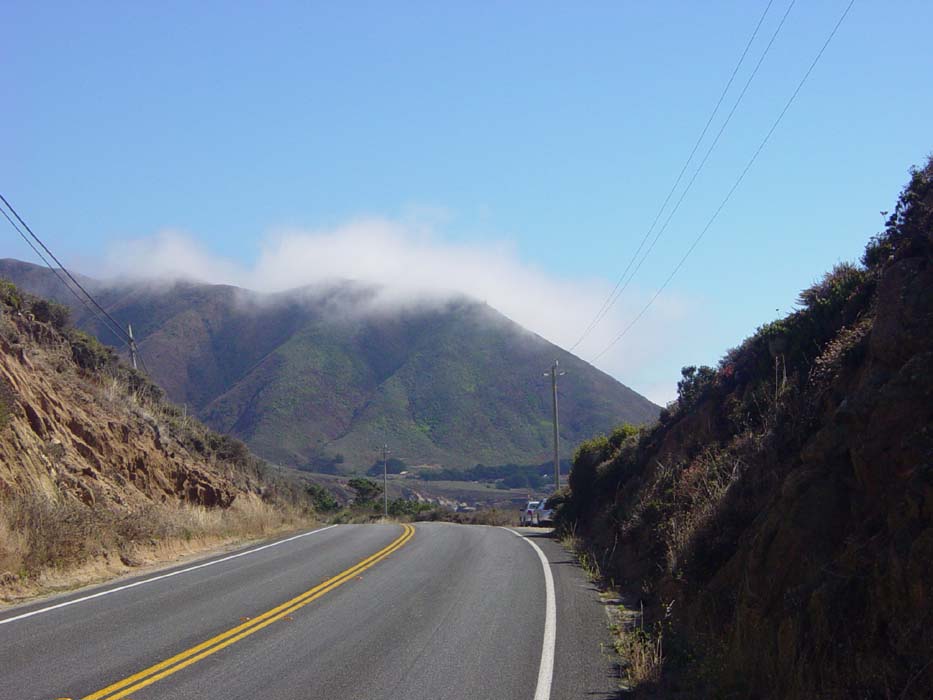 And now I'm through and this is what I see just to the right of the previous picture. Yeah, not bad, this might turn out to be pretty scenic. 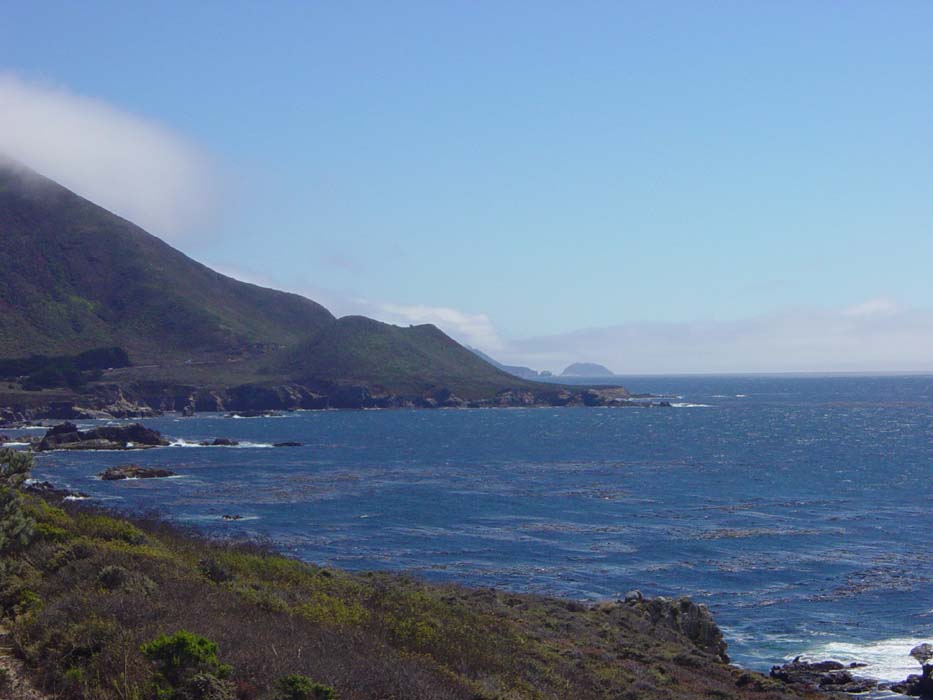 Another view of the same coastline. Not sure what I was trying to show here, unless maybe it was how fast the clouds were moving along the mountains, because this picture was taken only a few minutes later. 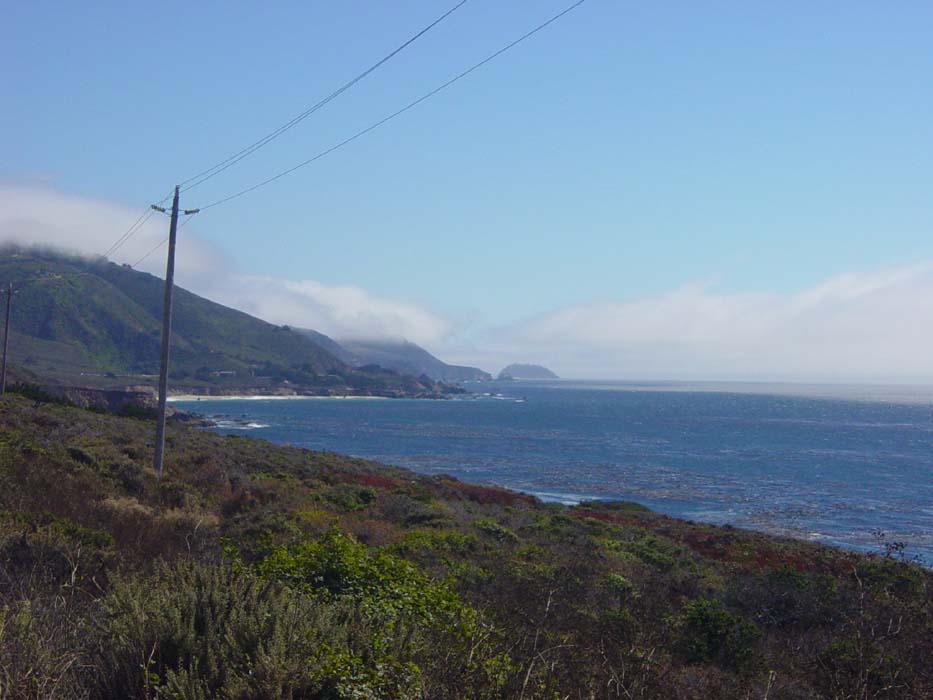 I got pretty close to the water on several occasions. This was from near sea level. I wouldn't stay that low for long. 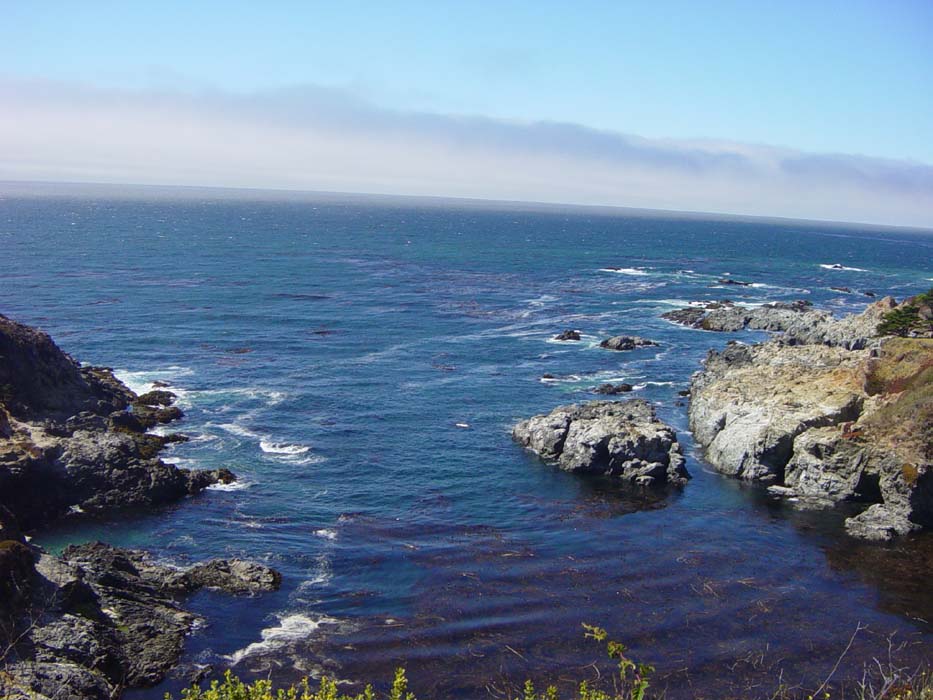 Coming around the next turn I saw the start of the hill that would turn out to be the most difficult climb of the day. This view was just amazing. Notice the bridge in the lower left, the road starting to wind upwards, the clouds cloaking the top of the hills and then that flat spot just below cloud level that indicates how high the road is at that point. Looks like a painful climb, but a lovely one. Nor was I mistaken on either count. 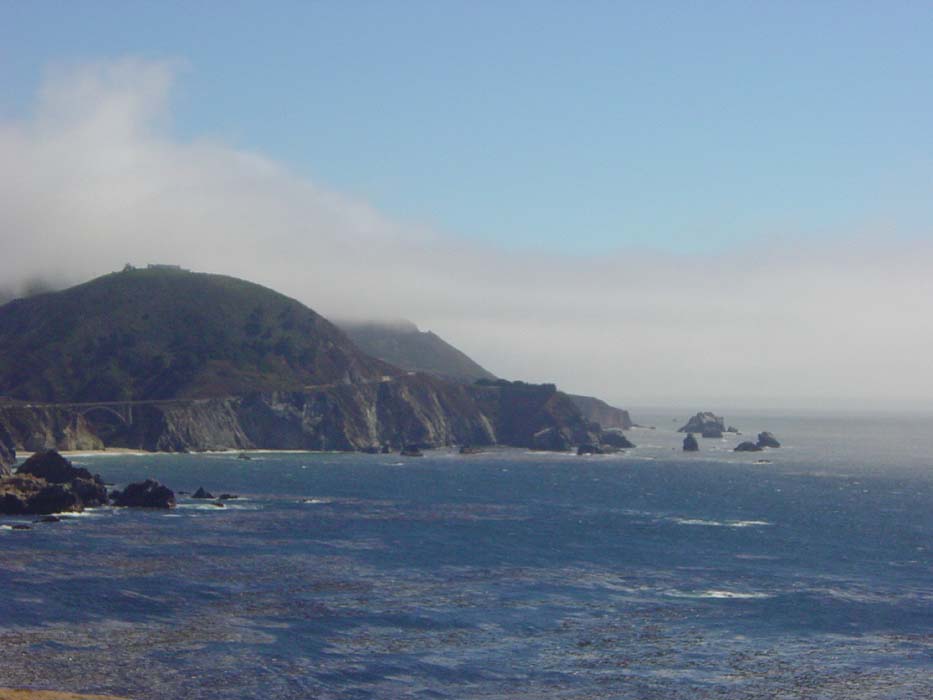 This was taken at the top of that first hill looking down into the cove there. 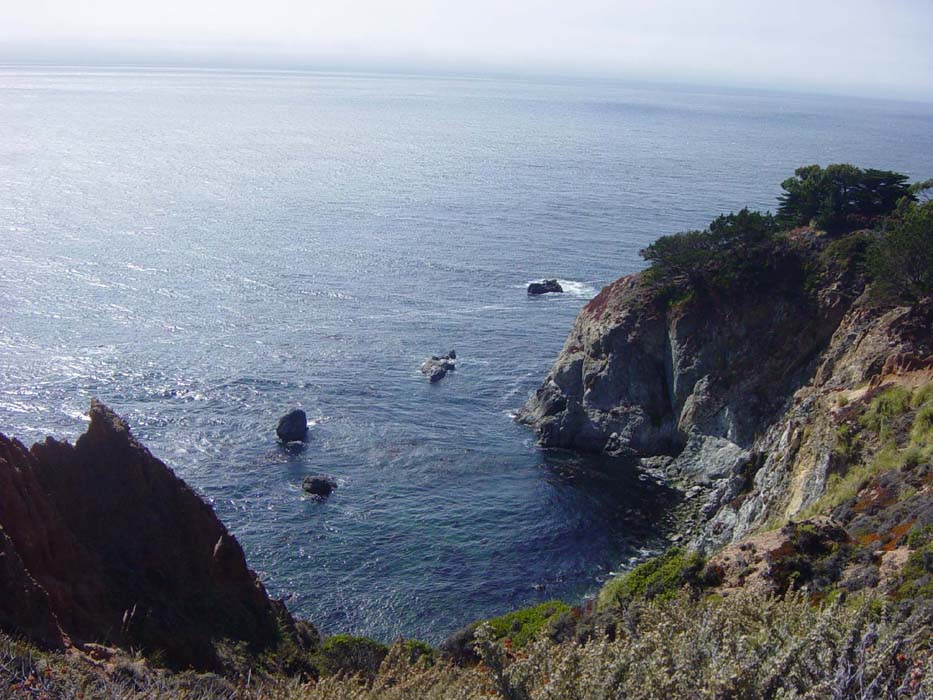 Looking back at the previous stretch of road. 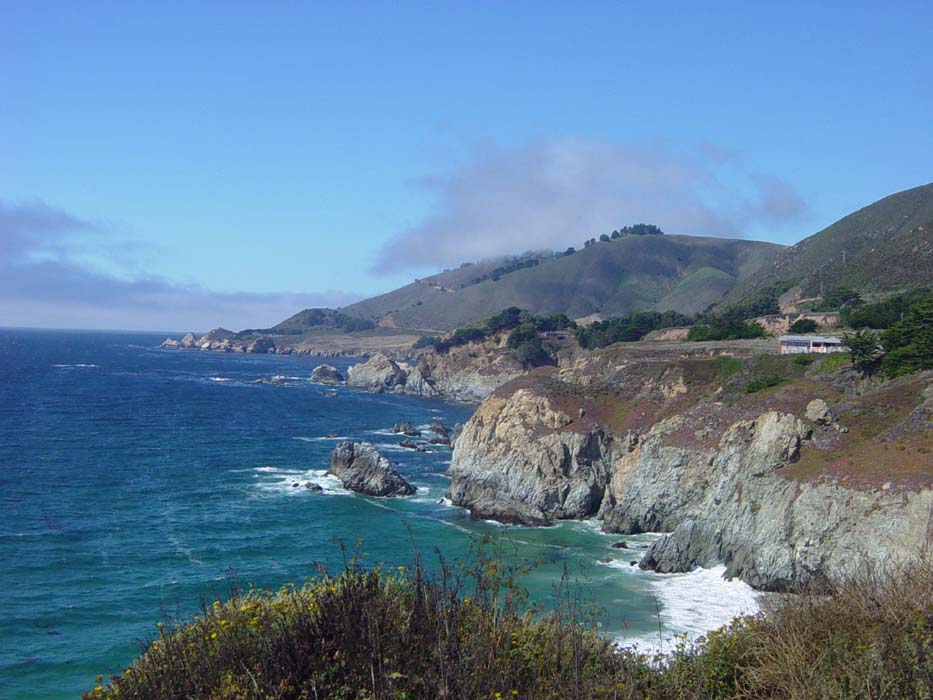 Ah, this bridge...there were many like it and they all saved me tons of climbing. On Route 1 north of Frisco, every little inlet and creek required the road to descend to sea level then rise all the way back up again. On this section, they built bridges instead. That made the road a whole lot more bearable. 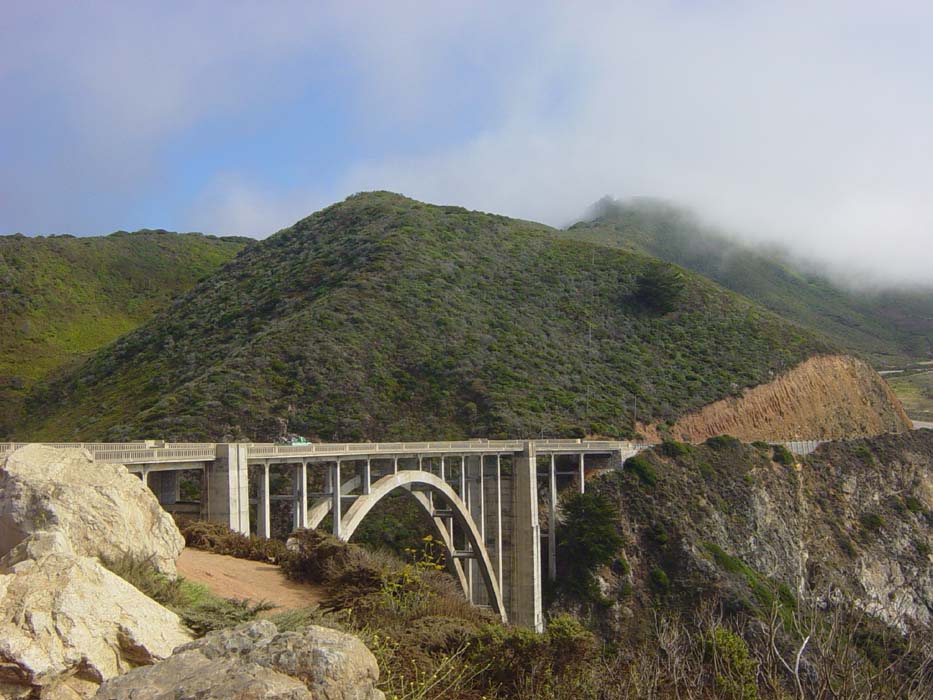 Here's the next section of hillside, from beach to cloud level. The fog is starting to hover around where that road is, threatening the view I will work so hard to earn. 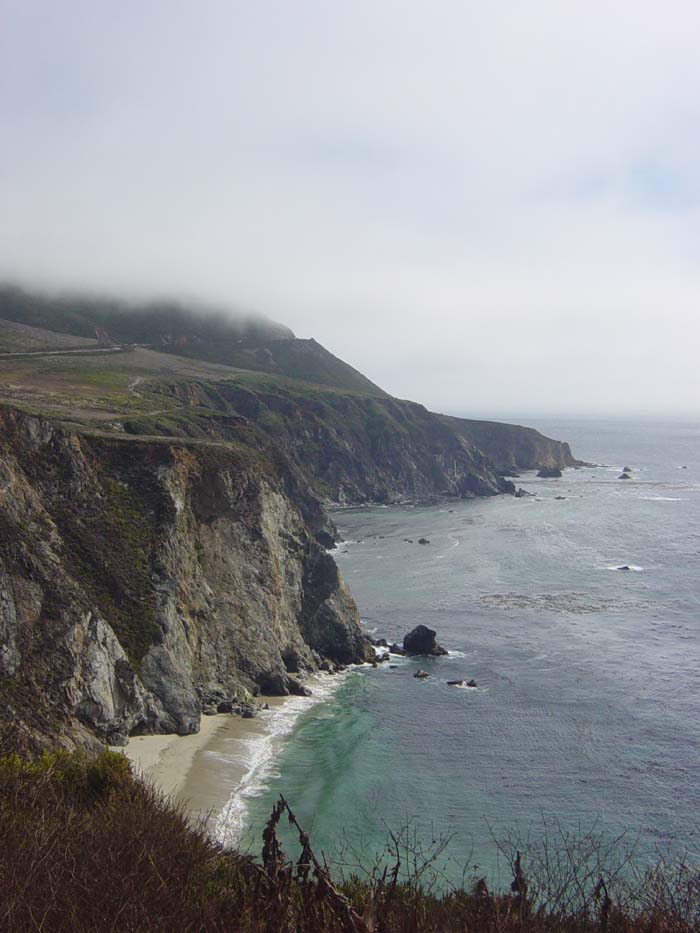 Fortunately, the fog stayed away. Here's a look back at the entirety of the climb. Ouch! Oh, and it's so windy up here, it's very nearly knocking my bike over. There was one place where the road turned into the wind and I literally couldn't ride up the slope and fight the wind at the same time without falling. Pushing was the only safe option. 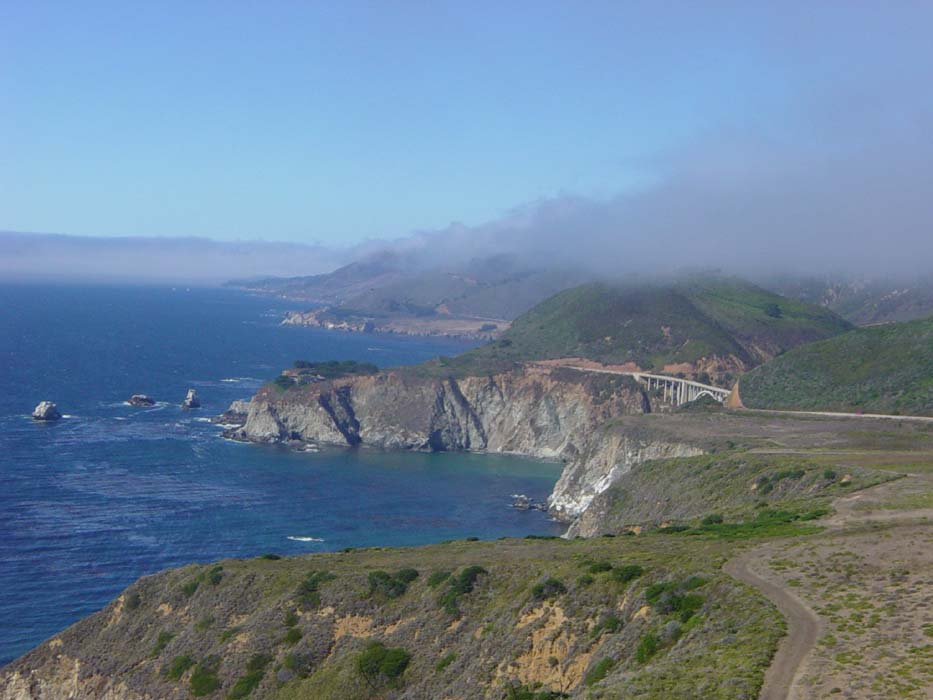 Looking left from the sam height, at a chunk of land sticking out into the ocean. Turns out this little penninsula used to be responsible for a lot of shipwrecks in the day. There's actually a lighthouse on it, but you can't tell yet, even in this zoom shot. 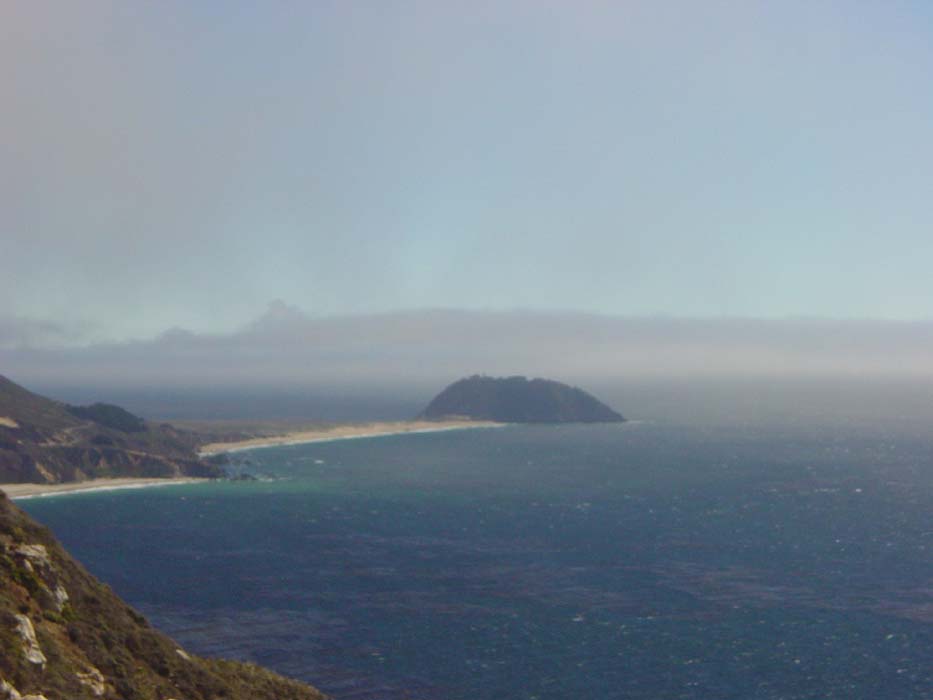 Now this is looking straight down about 900 feet from one of the many sheer dropoffs I passed. The wind was behind me mostly, but every now and then it would pop in from one side or the other and try to make me lose my balance. I went down the hill very, very carefully. 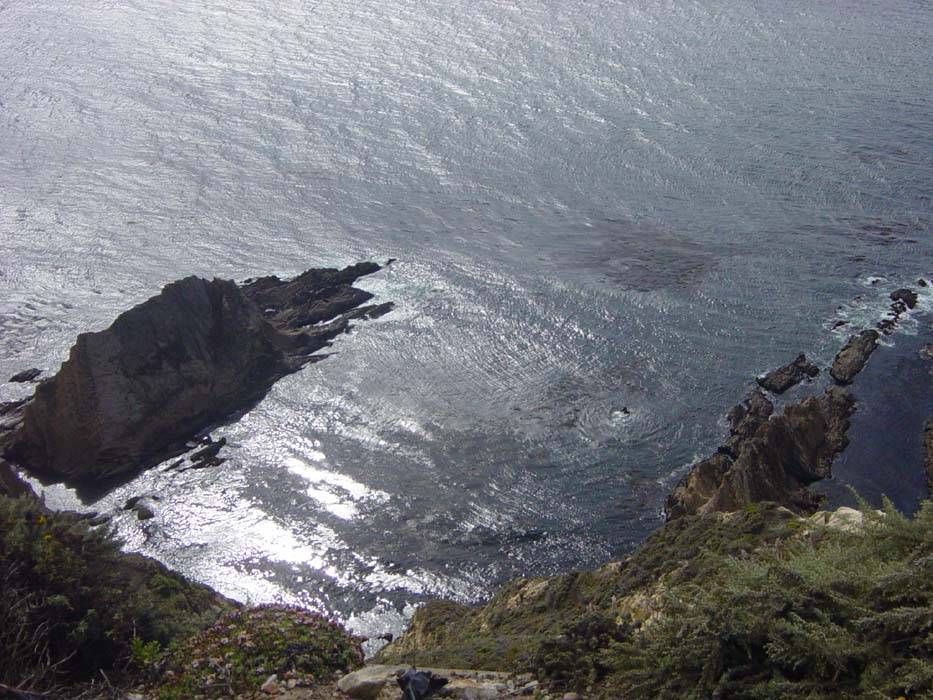 Another view from around the next corner. They weren't kidding about this being a beautiful stretch of road. 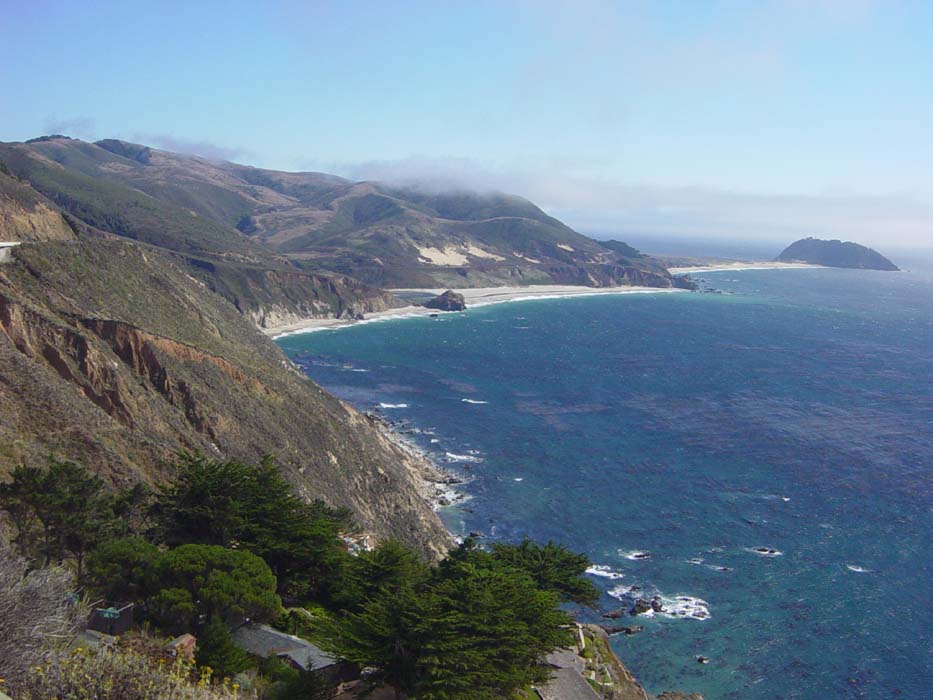 Here's that rocky penninsula again. The lighthouse is on the right side. Apparently there are tours, but you have to sign up in advance and they're only on weekends. Too bad for me, it's Wednesday. 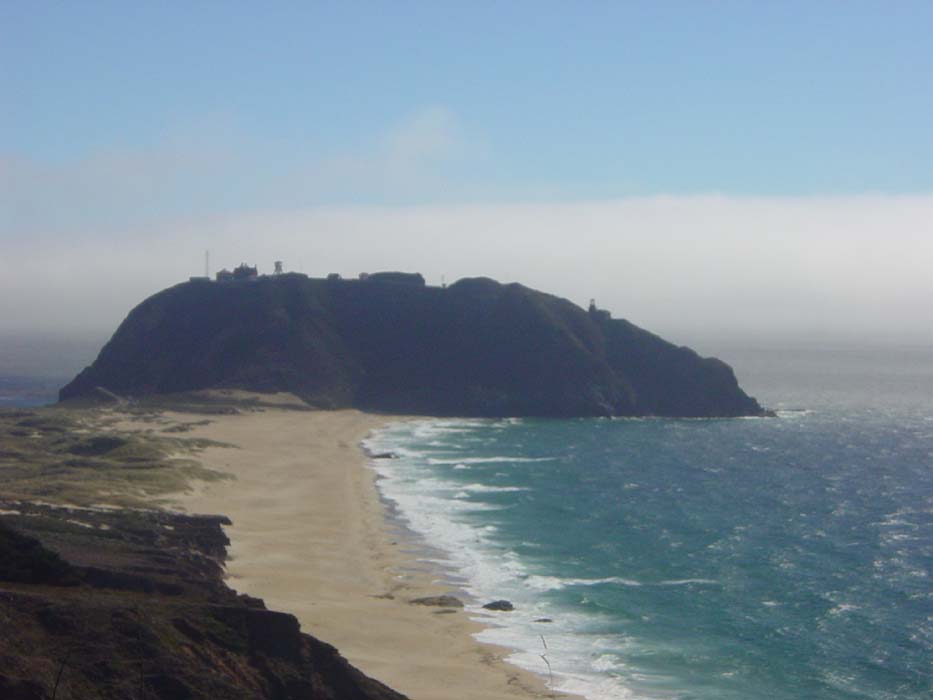 After this area the road turned inland, and I got this view of the hills I'd have to be climbing next. The wind pushed me along into that gap and a few miles later I was in Big Sur. 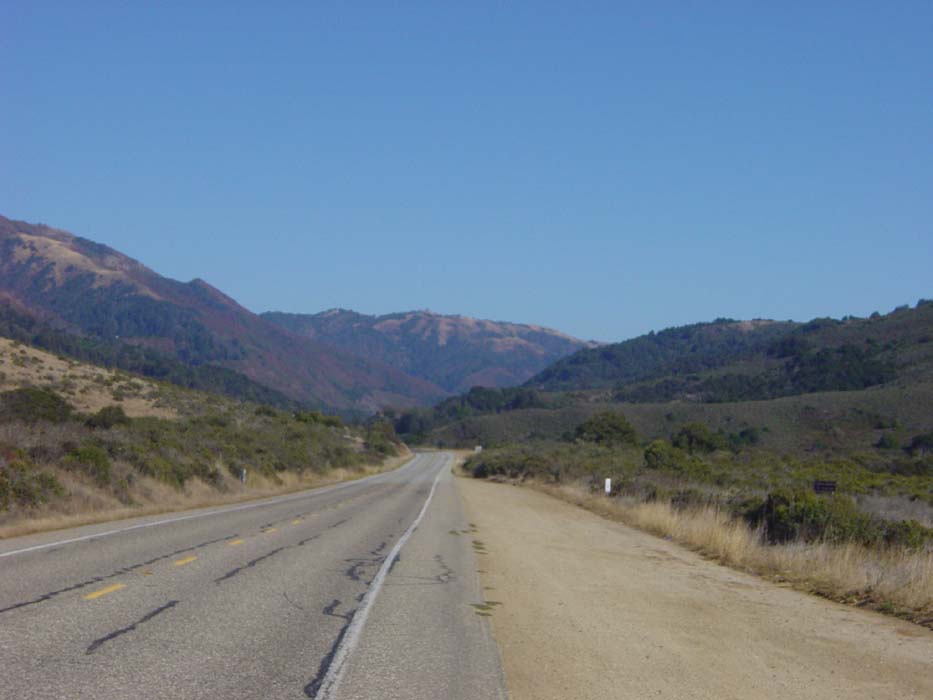 Big Sur is an expensive tourist area so I didn't think I would find an affordable room, and I was correct. I wound up camping amidst the redwoods, with no cell service, no Internet and no power. I did, however, find a restaurant close by that let me plug in while I ate, so I got to write this report there. However, it'll have to wait tomorrow night to be uploaded, by which time I hope to be in San Simeon.