Today I expected to head for Goleta, which sits a little bit west of Santa Barbara and is home to UCSB, as well as slightly cheaper hotels (but only slightly). The plan was to head south on 101, which according to Google Maps was a non restricted highway I could safely ride my bike on. The first hurdle, though, was I had to skirt a section of it in Santa Maria that actually was restricted. To do that, I had to make my way down some side roads and enter the highway one exit southeast of town. So that was the plan at the start.

As you can see from the picture here, the day was overcast and cool when I left at 10:30. While cleaning my sunglasses, I snapped off one of the arms, forcing me to stop and buy new ones. This wasn't a good sign to start the ride. Nonetheless, I proceeded on down this road here towards the side street that would eventually take me over some hills and then to 101. 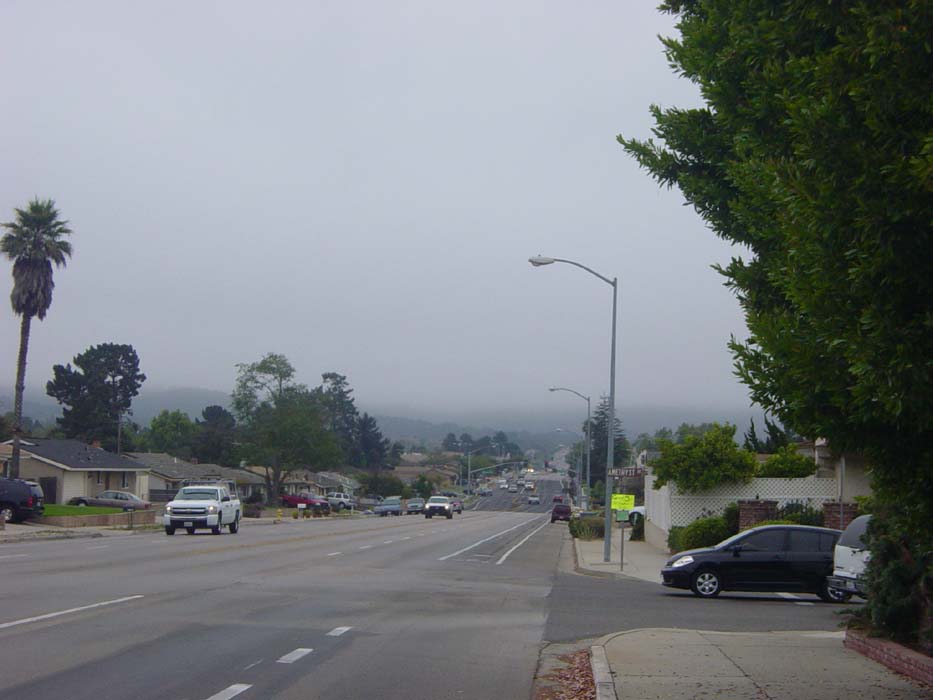 The only problem was, when I got about 3 miles further along, and halfway up said hills, the road I was supposed to turn on just wasn't there. There was a dirt road and some evidence that maybe at one time there'd been some curbs here, but that was it. A local resident told me the only thing out that way was private land. So I had to go back a couple miles and try another route. When I passed the 101 entrance, where I thought I couldn't enter, there was no sign telling me I couldn't, so I went ahead and got on. There was a police car parked on the other side, as it turned out, and the officer must've seen me, but didn't try to stop me, suggesting it was okay to be there. So on I went. About a mile later I came to the spot where I would've entered had I found the side road, and all that was there was a dirt path into a barbed wire fence with a farm beyond. There was no going through that way.

Anyhow, I headed on down the freeway with the wind at my back and except for a couple long (but gradual) climbs things went fairly well at first. The clouds cleared away about an hour into the ride (see next picture) and a few minutes after that shot was taken I had nothing but clear skies the rest of the day. 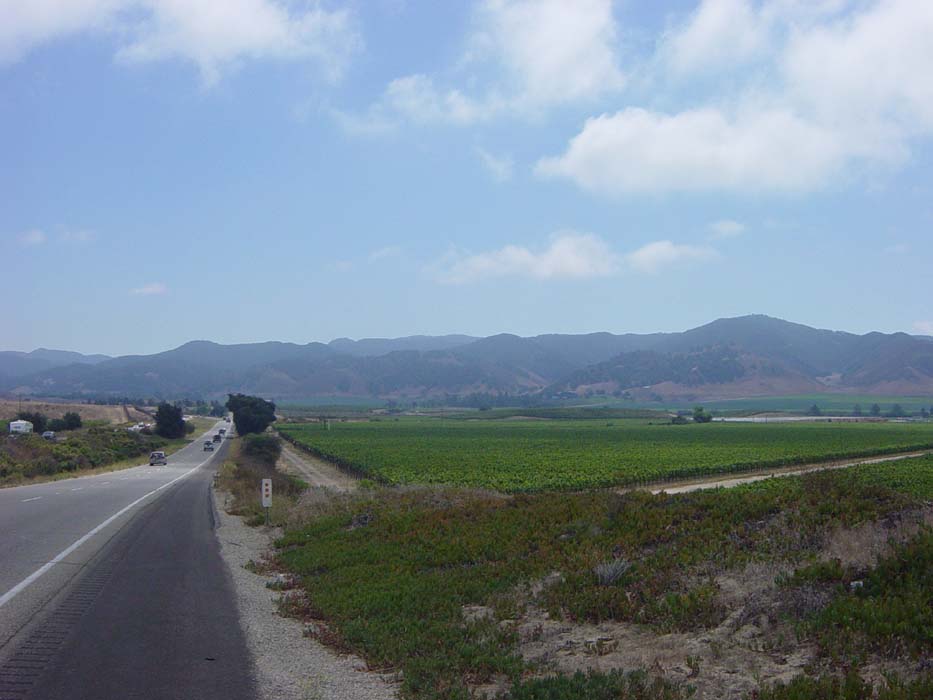 Here's a view of some of my surroundings as I headed down the freeway. Brown hills with some darker mountains beyond. It didn't feel much like a desert, but I did see some cacti here and there so it probably was one, technically. 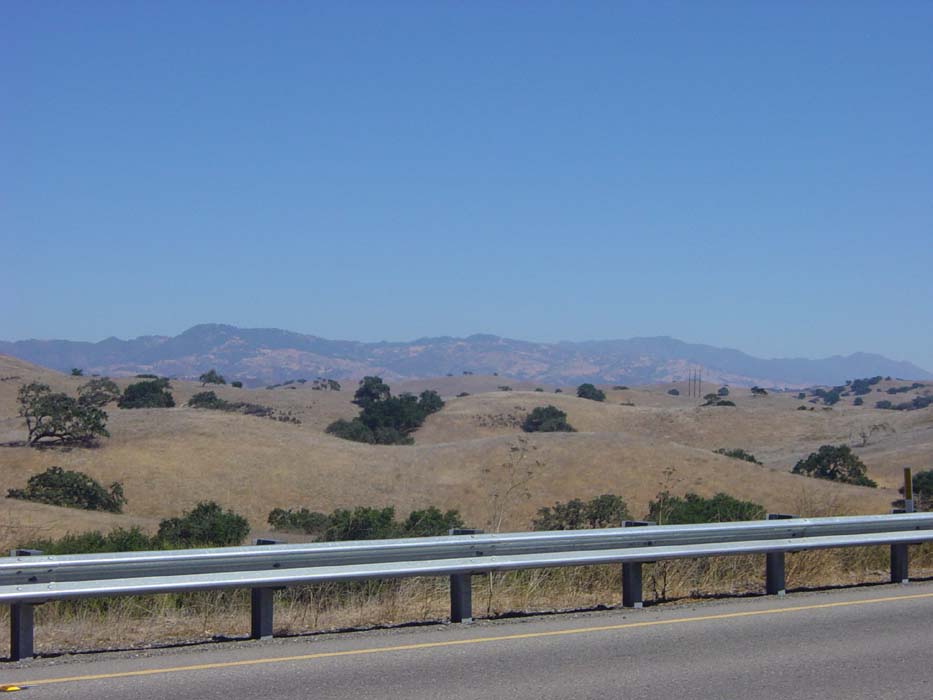 And then the real problems started. I was just riding along minding my own business and suddenly there was THE SIGN. 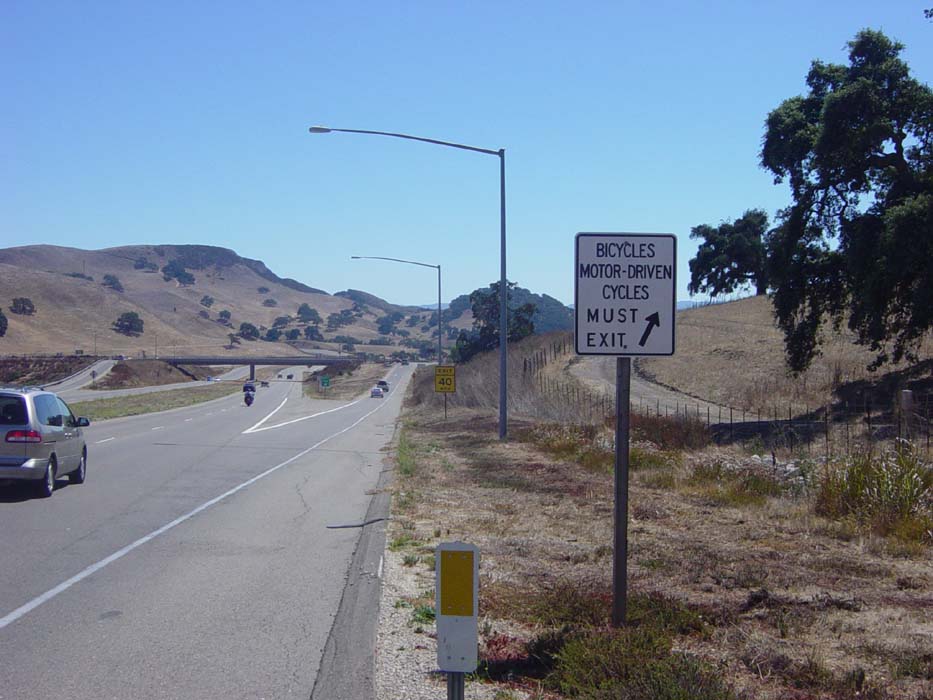 This annoyed me, seeing as my map showed no restricted access all day, but THE SIGN is all powerful and cannot be denied. I obeyed the will of THE SIGN and dutifully exited, even though as near as I could tell there was no difference between this section of freeway and any of what I'd just been on.

This took me through a small town where I had lunch and then checked the next on ramp to 101, and found no trace of THE SIGN. So I got back on the highway and continued onward. Everything seemed fine until about 6 miles later when THE SIGN was back. I had to exit at Route 154 and reconsider my options. I found a local with an up to date map, and found that the section of highway on to the next town was restricted, then there was an open area, and then once I hit the coast it was restricted again all the way to Santa Barbara. So there went my plan of skipping the mountains and going along the coast. All because of that damned SIGN.

So anyway, I steeled myself for the trials to come and rode southeast, with only the tailwind to keep me company. This is the mountain range I'm going to have to cross soon. I'm scared... 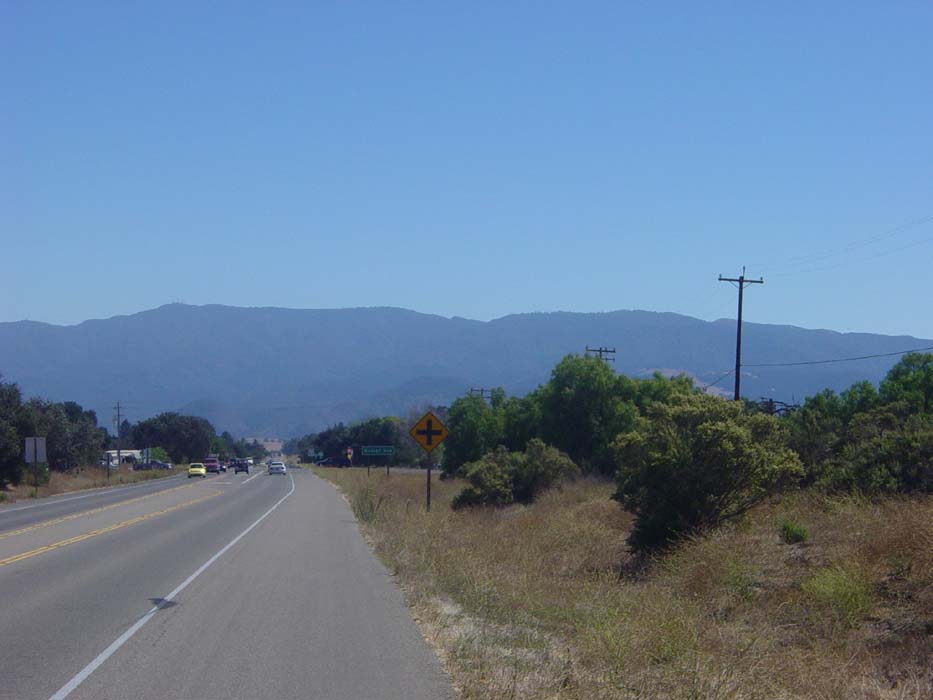 It looks even worse close up. 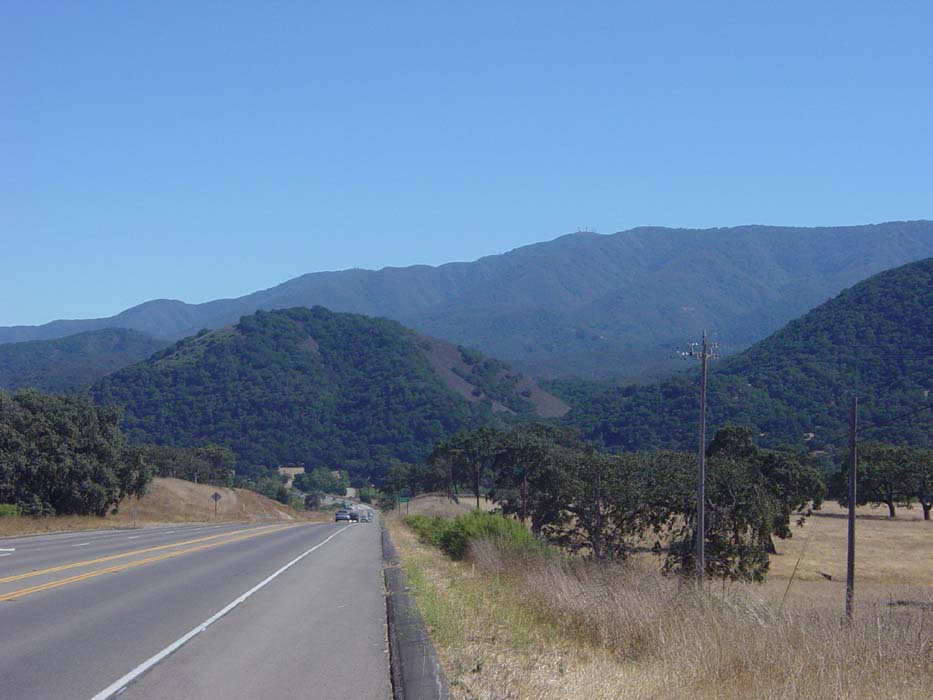 The road turned left and started working its way up into the foothills slowly. At one point I arrived at an RV park alongside this lake. There was never any thought of quitting and camping for the night. I'd been working myself up to do this mountain and that's what I was going to do. I did, however, take the opportunity to refresh the water bottles and use the faclities before tackling the climb. 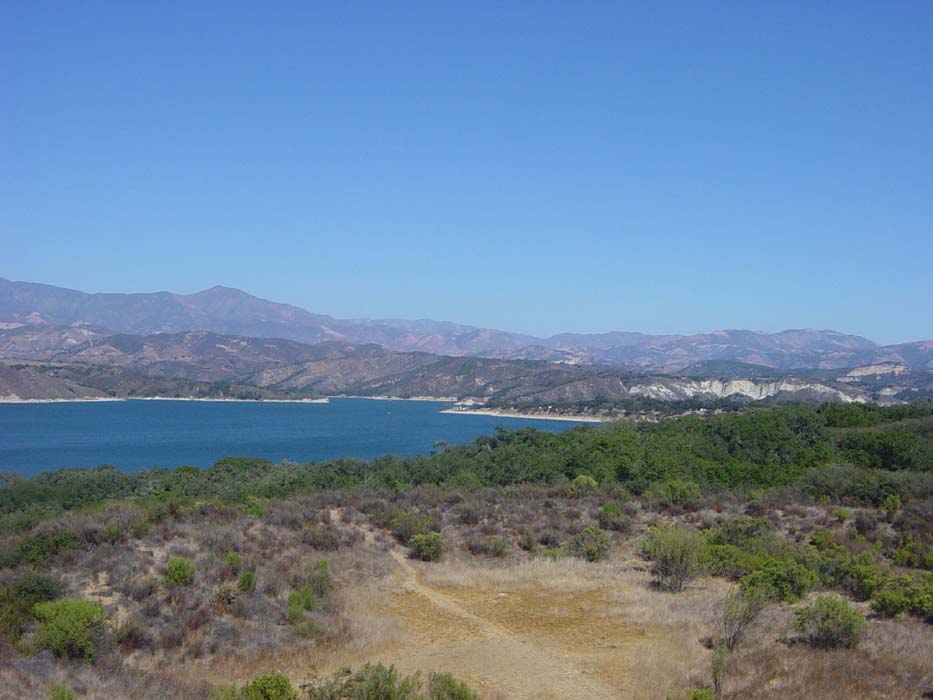 For the first 8 miles of the 12 involved in this ordeal, the road climbed a lot and then dropped some, forcing me to give up some of my elevation gain (which I did reluctantly). There were some nice views, like this one, but I hadn't even really started the climbing yet. 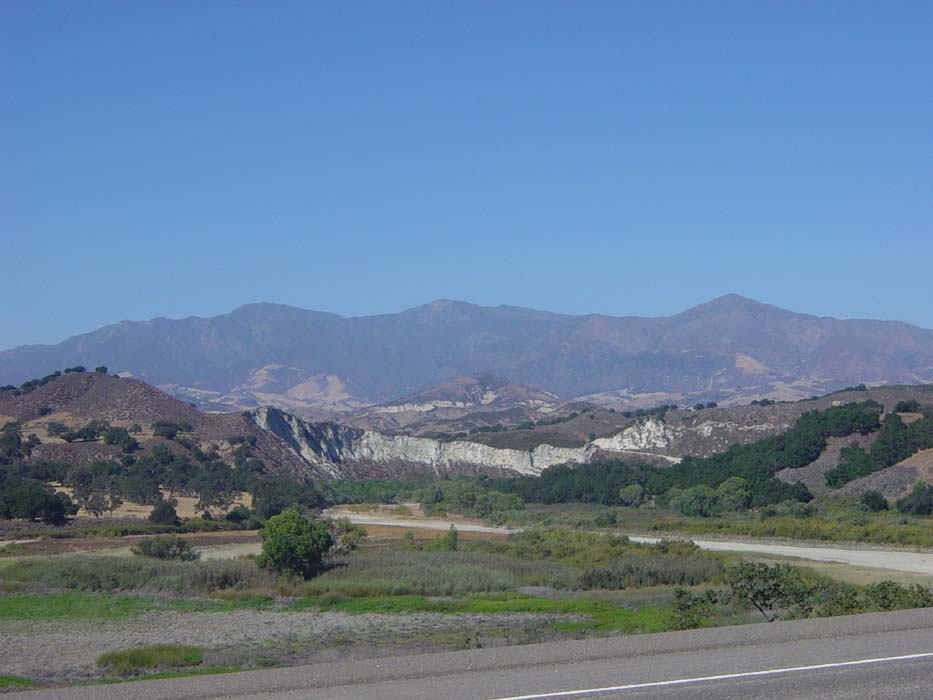 Aha. And so it begins. 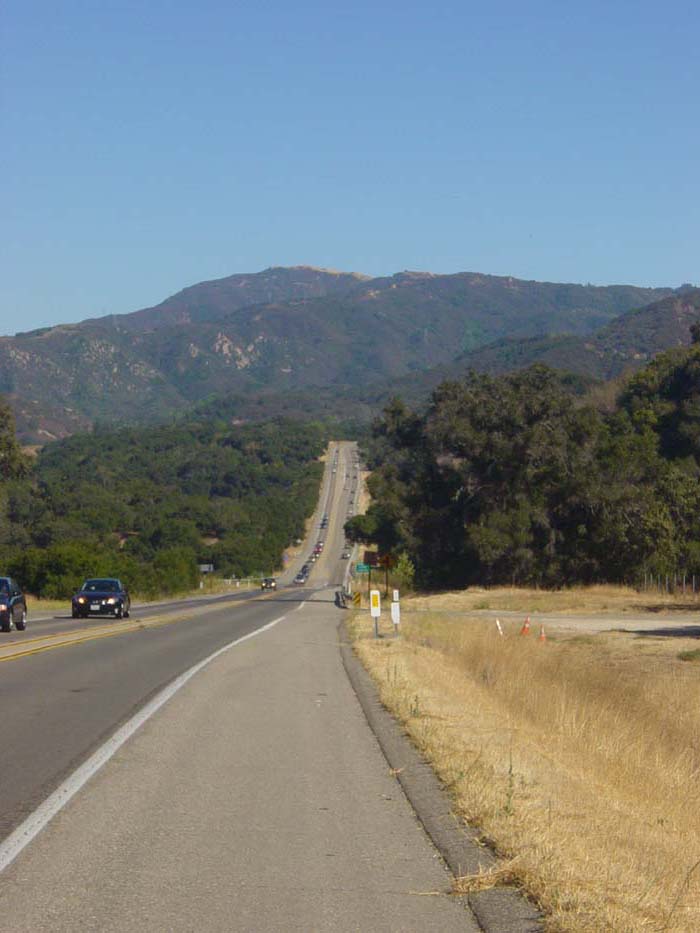 This was a grueling 4.5-mile steep uphill battle that took about an hour and a half to complete, because of all the rest stops required. This may well have been the most difficult hill of the ride, although it really didn't seem like it because it was alone (many of the others were combined with other giant hills throughout the day and thus seemed worse). Since I knew this was the only one I had to deal with all afternoon, I took it slowly and carefully. The shoulder was (usually) nice and wide and there wasn't that much traffic. Plus, the views were getting better with every pedal stroke. 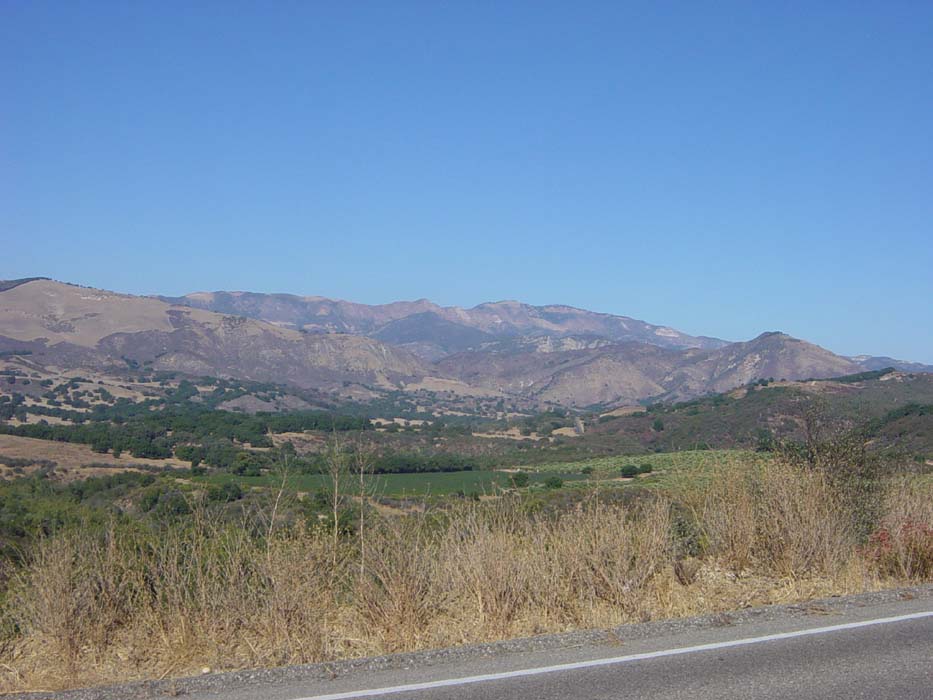 I thought that last one was nice but once I got a bit higher, it looked even better. 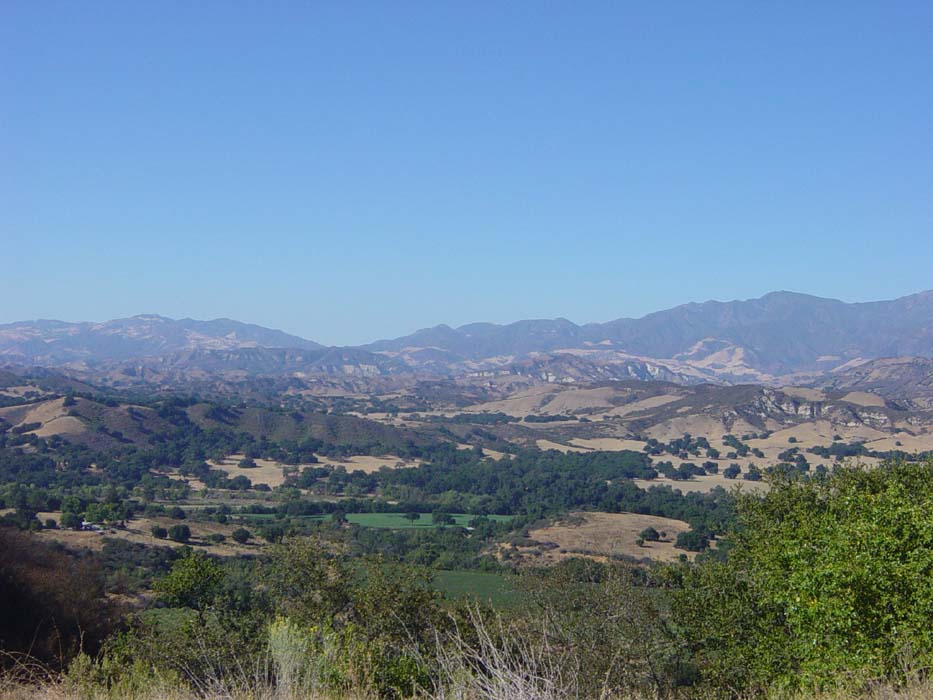 At one point there was this long, narrow bridge that seemed to go on forever. I took this picture looking back over my left shoulder, not on the bridge itself, because, well, there was no loitering allowed. 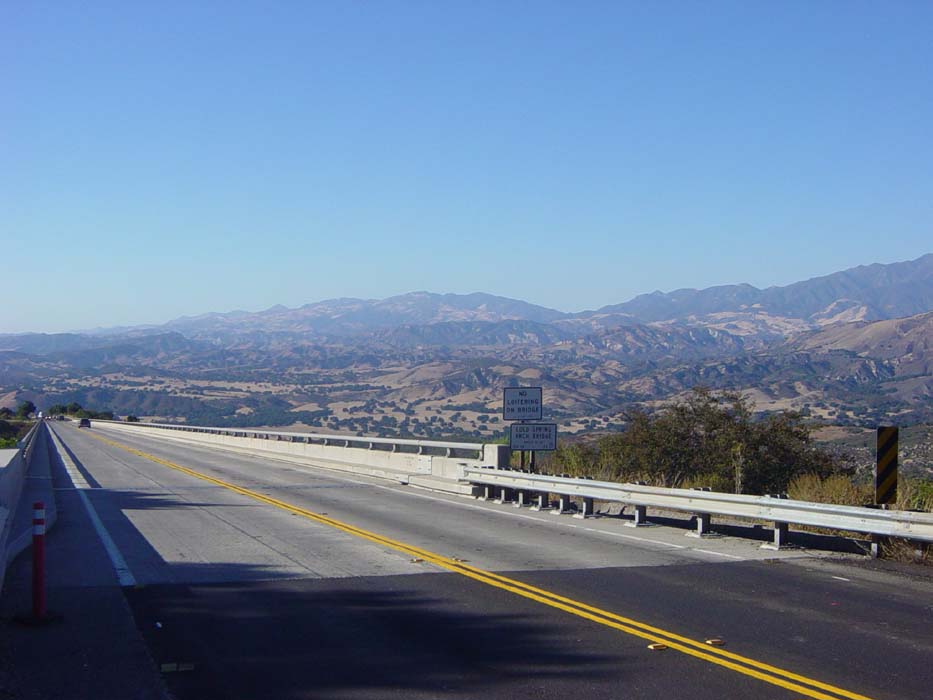 The road finally started to curve into a gap in the hills and the top was in sight. This was my last look at the north side. I found out later the elevation at the top of San Marcos Pass was just short of 2300 feet, definitely my highest climb of the ride. With all the other mini-climbs and mini-descents leading up to it, I'm sure that was at least 4000 elevation gain just in those 12 miles. 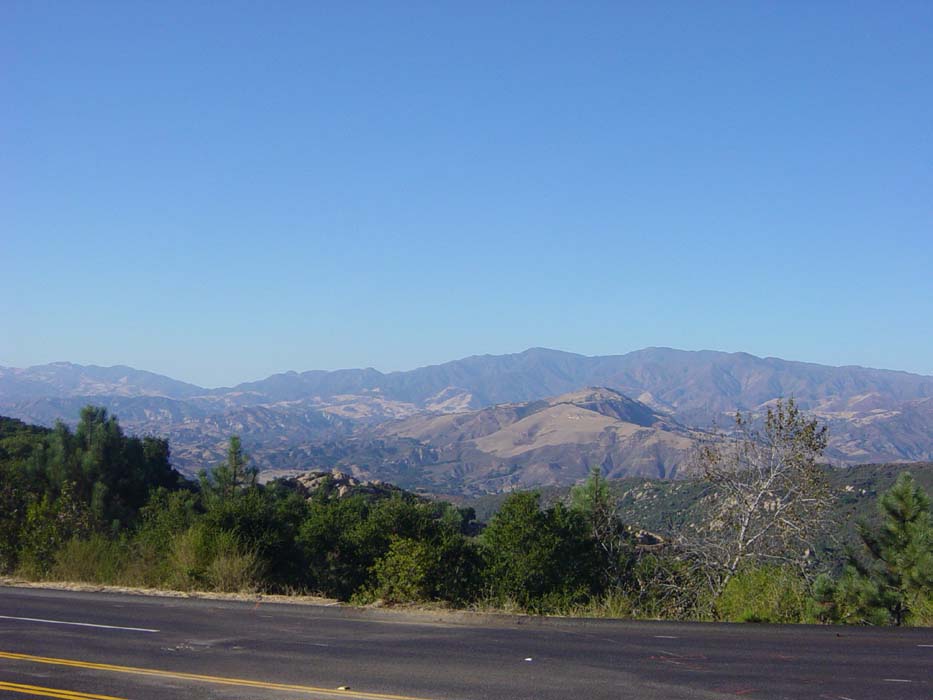 Once on the other side I was treated to some amazing views of Santa Barbara and the distant coast. It was all downhill from here. 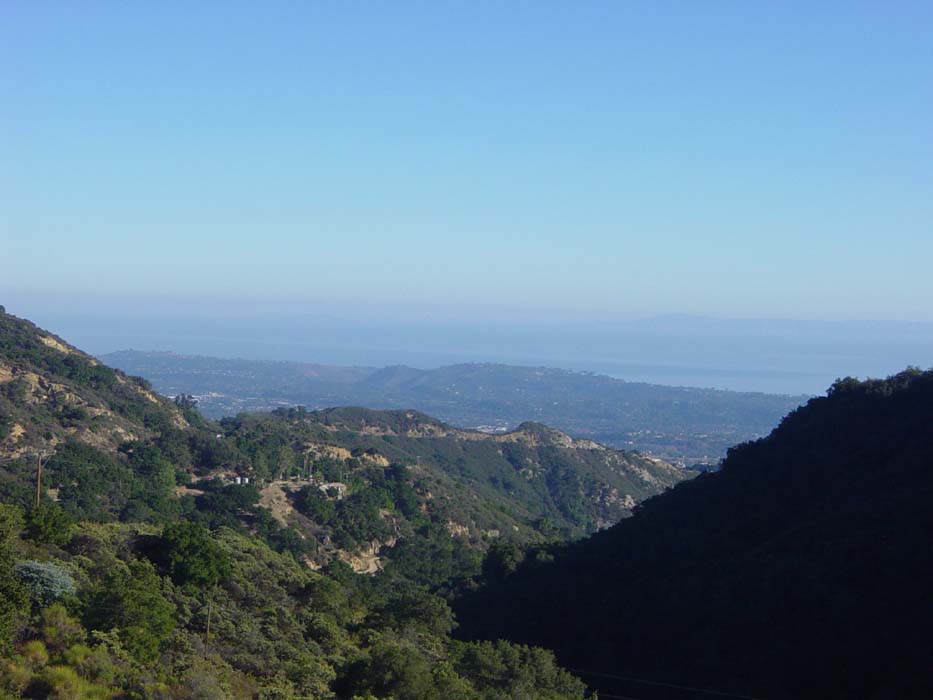 Here's what the road looked like ahead of me as I descended. Wasn't it nice of them to repave just for me? Of course, it would've been nice if the shoulder was better marked. 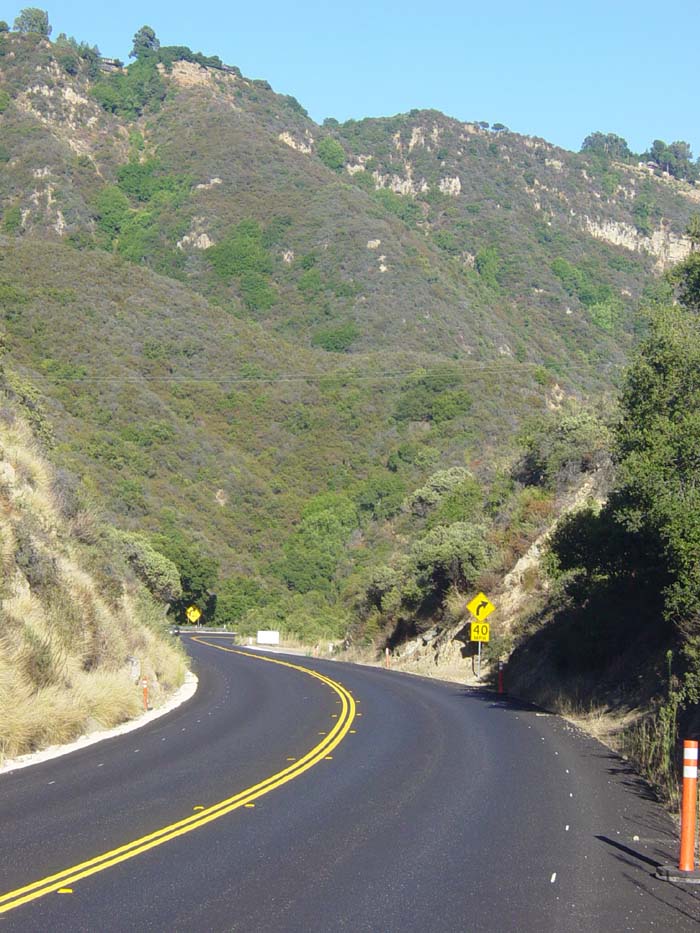 An even better look at the Goleta/Santa Barbara area. This picture doesn't do it justice, though. Standing there looking out at this amazing sight kept me busy for several minutes as I enjoyed the hard-earned view. 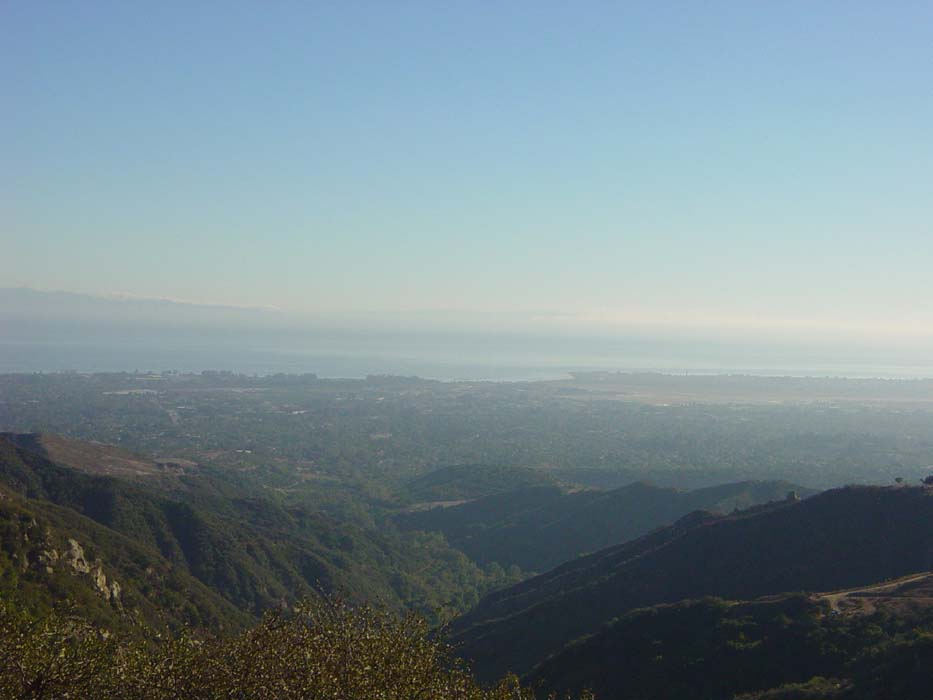 Another look from a bit further down the road. Again, the camera doesn't really give you the full impact of this vista. 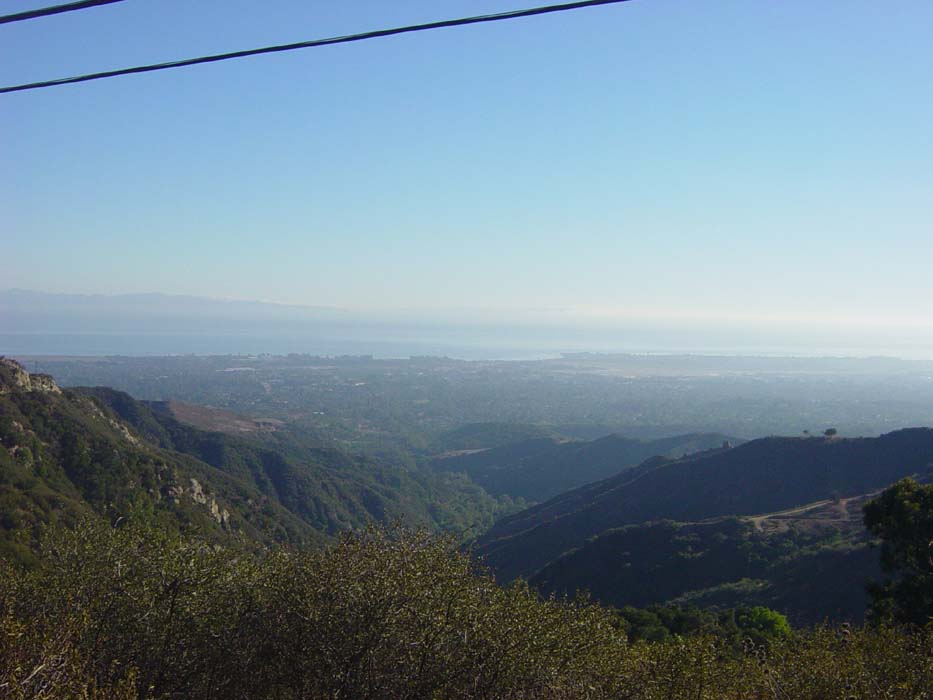 Yet another shot, this time with the road in view so you get a better idea of the sight I got to enjoy all the way down this hillside. 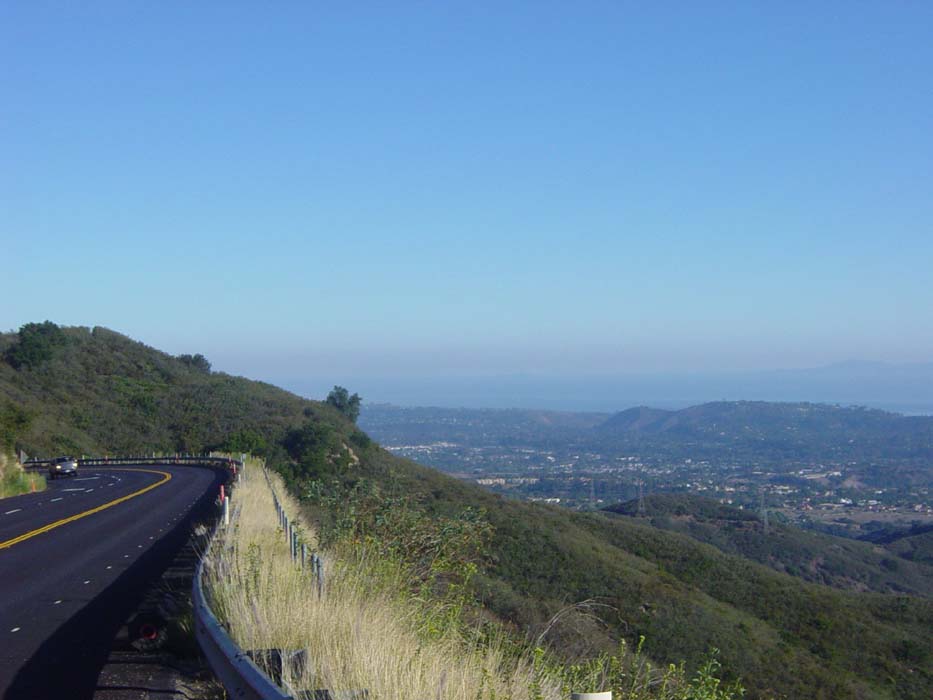 And one last picture, looking back up at the road behind me. 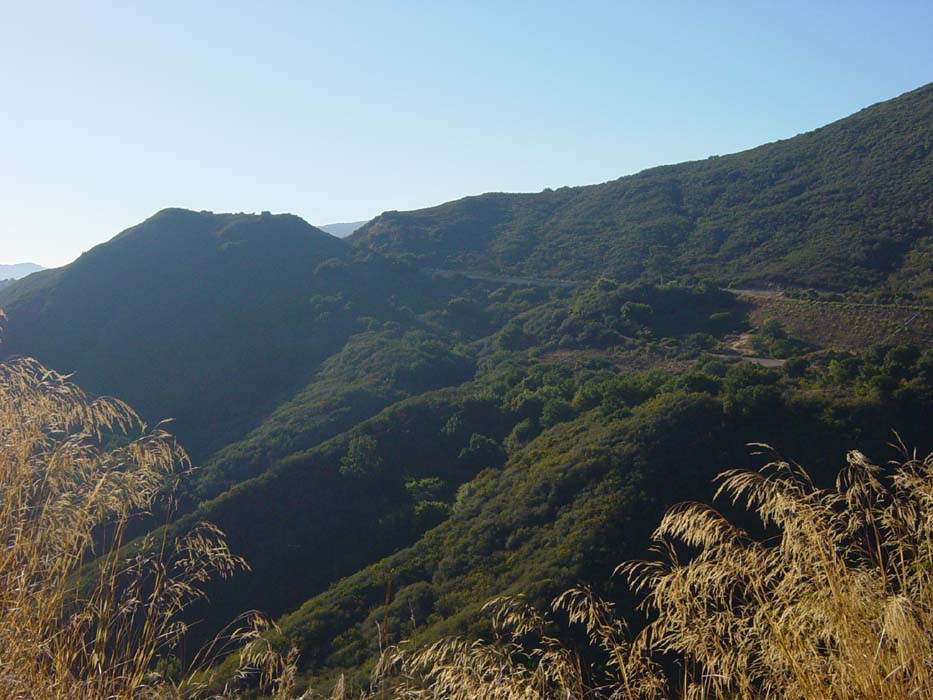 Arriving in Santa Barbara about 15 minutes later, I began the search for hotels, but apparently this is a busy town on a Saturday night, so there wasn't much available. I wound up in a tiny little place for an even $100, the most I've paid for any night's stay so far on this trip. Unfortunately, the same fate awaits me tomorrow as the only town I can reasonably expect to reach is Malibu, unless I go either 40 miles (too short) or 95 miles (too far). I'll have to make the decision at the 40-mile point to see if I want to try to go for the longer run. We'll see how I feel then