We were warned yesterday that the weather today was going to suck, and the prediction came true. The rain was steady, sometimes heavy, but unrelenting all day long...plus it was colder, probably in the mid-50s. As if that weren't enough, the wind was blowing in our faces nonstop, keeping us soaked and stinging our skin on the few times we picked up speed on a descent. Most of the day seemed to be spent climbing, and there were a couple real nasty ones that were quite steep. On my own bike I might have been able to take them, but with these the speed dropped too slow to stay in control, so we had to walk at one point. However, the sight of the German tour group riding the same route as us (a group of four who left half an hour beforehand, decked out in shorts and matching ponchos) was somewhat heartening. We'd caught up to them in about 5km and left them in our dust, and despite a fairly long rest stop at the 10km point, we never saw them again. Considering the volume of rain and their lack of appropriate attire, they were probably soaked and freezing somewhere a couple hours behind us by the time we got finished.

The route today meandered all over the place, turning hither and thither leaving us without any sense of where we really were, except the little "E" markers kept popping up to show us we were on the right track. We passed through numerous small towns and one larger one, Traunstein, where there was a brewery we might've taken a tour of if we weren't completely soaked. We did take a quick jaunt through the city just to check it out before returning to the river and following the path. Then we came to a spot where we got confused, and finding an "E" marker pointing back into town, we headed that way a couple klicks before realizing this couldn't possibly be the right way. After going back and confirming there really was an "E" there (pointing the wrong way) we guessed at staying on the river path and spent several anxious kilometers wondering if we'd find the next turn or if we were, in fact, totally lost. Fortunately we came to the railroad underpass on the directions and continued on, resolving to complain about this misleading arrow later when we filled out the tour evaluation form. (This wasn't the first such issue and probably won't be the last.)

When we reached Grabenstatt, about two-thirds of the way through the ride, we pulled out the map and had to figure out how to finish off the day. The instruction page (and "E" markers) guided us to Ubersee, a town on the southeast edge of the lake Chiemsee, which we'll be circling tomorrow. The problem is our hotel was in Bernau, about 10km to the west. Apparently we made our tour reservations late enough that the hotels in Ubersee were sold out, so they had to put us in this alternate one. Not a big deal (since tomorrow we loop around Chiemsee anyway so the distance will be the same), but it adds 10km to the ride today and there weren't any instructions on how to find the hotel. Fortunately, the maps provided were good enough to do the job and there were plenty of signs pointing us to Bernau anyway so we had little trouble (even though they tried real hard to hide the Jagerhof hotel, which resembled a large bed & breakfast, behind a used car lot).

Apparently today (which is Labor Day in the States) is also a holiday in Germany, so the people running the hotel were taking the day off. We managed to arrive just as they were leaving (right around 2pm, much sooner than they expected to see us), so they handed us some instructions and a key and took off. If we'd been a few minutes later, we would've been checking ourselves in (literally)...I must say it's amazing to find people so trusting these days. They were also nice enough to volunteer to toss our wet clothes in the dryer, but several hours later (as I write this) we haven't seen them again, so they'll probably not show up until tomorrow morning. Hopefully our shoes will be dry as well, because it's going to be cold again tomorrow and if we ride in wet shoes, our toes will be freezing all day.

In any case, we walked around town for a bit, had lunch at a small corner place (I had a half chicken with fries), and then it was back to the hotel for nap time. (The jet lag refuses to go away...sigh.) Around 8pm we headed to a local restaurant for dinner, but neither of us were very hungry this time so we just had a couple sausages and a pretzel. Plus, this time I took my own water bottle along, since I'm sick of paying ridiculous prices for drinks. If I had to live here, I think that would drive me completely crazy.

After that it was back to the room to update this log, study tomorrow's route, and get some much needed sleep. (By the way, I only had a light breakfast today, just some dry cereal and orange juice, and ran into no stomach troubles whatsoever.)

And now for today's pictures. Almost immediately after leaving Waging we came to a pretty steep hill and stopped partway up to catch our breaths (nothing like climbing a big hill first thing in the morning) and take some pictures. This is the view from that spot, which would've looked much better if it wasn't pouring down rain. 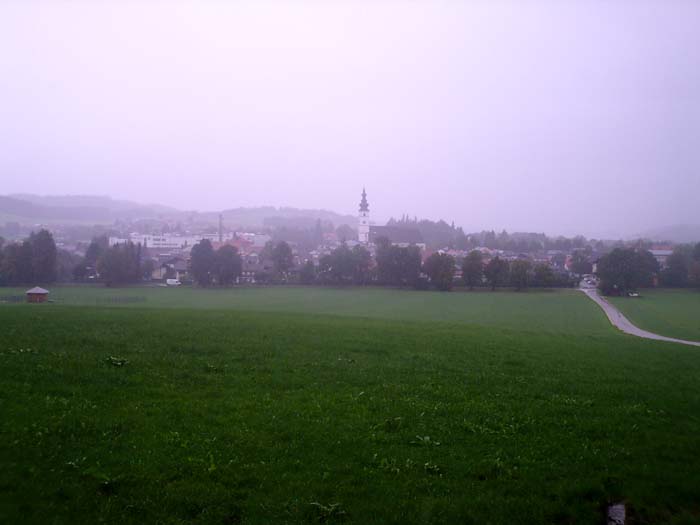 The road to the right there is what we climbed on the way to this spot. It's only one lane wide and is used by both cars and bikes. There are lots of roads like that, and sometimes even paths that look too narrow are still used by cars. You have to constantly be aware of the fact that a car might show up at any moment, from either direction. Fortunately, here in Germany they're quite used to cyclists and have no problem giving way when necessary. Back home, any cyclist who had the temerity to be in a driver's way will get a severe honking, or possibly a vicious yelling. Occasionally they even throw stuff. I have yet to be honked at even once over here. (Post-Ride Edit: Not a single honk the entire tour.)

Anyway, all ranting aside, I tried to get a picture of one of those elusive "E" markers I keep talking about, but because the camera adjusted the white balance a bit too much, you can hardly see it in this photo. It's between my fingers on the sign post. Finding them is sometimes quite a challenge, especially today with so much rain. (It looks bright, but trust me, we didn't see the sun all day...it's just the camera adjusting for the overcast conditions. The sunglasses are just there to keep the rain out of my eyes.) 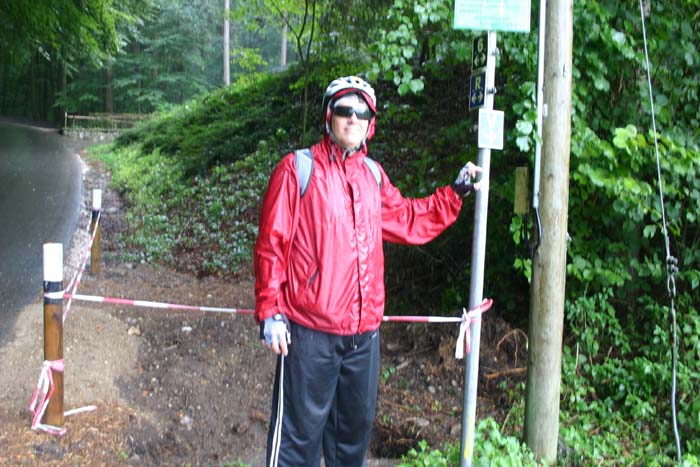 About 10km into the ride we stopped at a little shack in the middle of nowhere (it looked sort of like a bus stop, but I don't think buses ever stopped there, it was just shelter for travelers). This is what the terrain looked like: 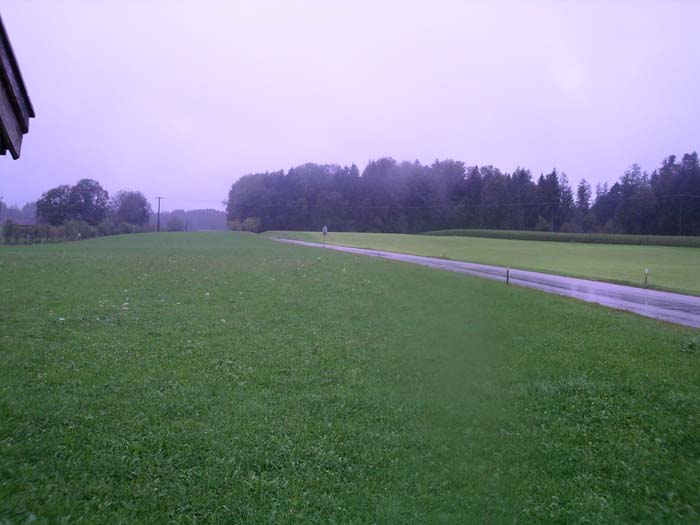 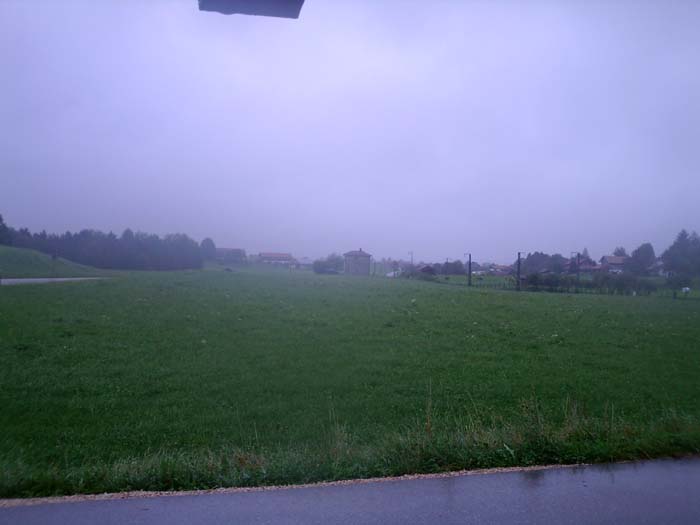 Pretty ordinary, huh? Well, not everything is picture postcard scenic, after all. This does give you a pretty good idea of how gray and rainy and basically disgusting the day was. Most of these pictures are in the same vein, so I'll try to quit complaining about the nasty weather.

Anyway, this is the town of Traunstein, which we were able to get a good view of from the top of a hill on the way into the city. Shortly after taking this picture, we made a sharp descent, hooked around on some narrow streets, and proceeded to nearly get lost. Incidentally, see that sign partially covered up on the right there? It says "Ettendorf," which is the name of the small town behind us, and the red line indicates you are now leaving said town. That's how they let you know you're exiting the city limits. 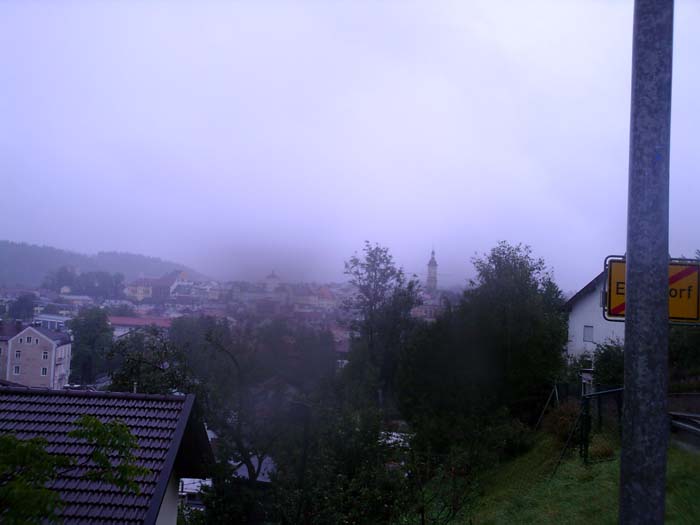 Once we got un-lost, we headed on towards Grabenstatt where we came to a spot where a bulldozer was sitting directly across the road we were supposed to use. Apparently there was road construction down there, but since we were pretty sure we'd get re-lost if we tried to go around, we just plowed on through. There was some gravel to deal with but nothing that caused any real problems, we continued on our way. Here's a picture of Grabenstatt when we finally got there (stupid rain): 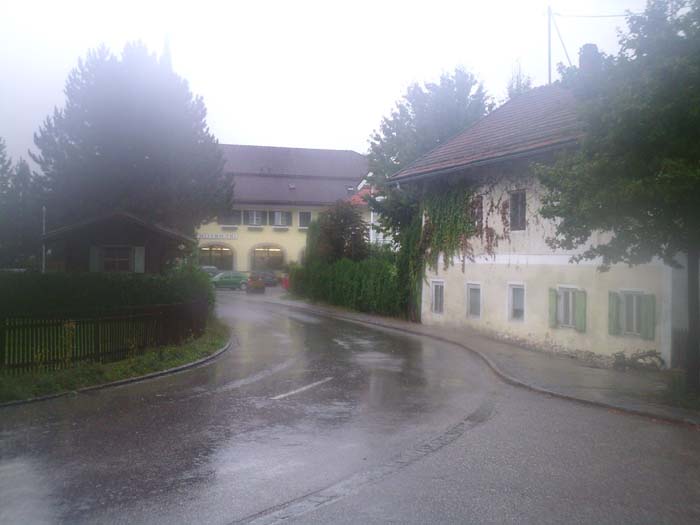 Once we left this town we experienced about another 10km of countryside, mostly on bike paths. Some of these paths were gravel, not pavement, which was somewhat annoying considering the weather (did I mention that it was raining?). Here are some pics from this section of the ride: 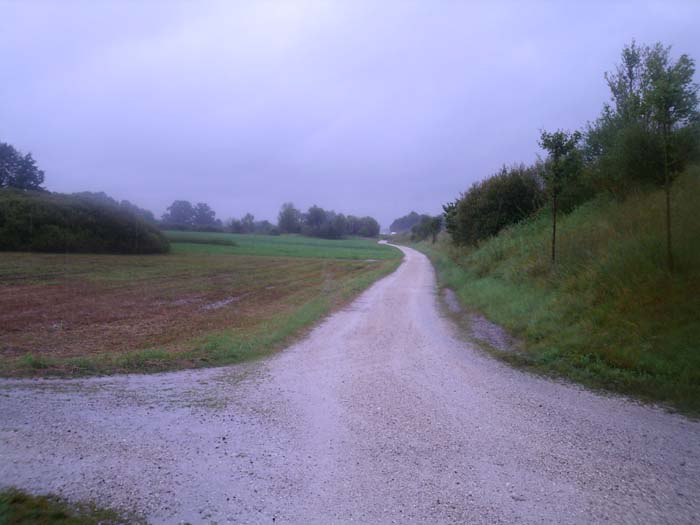 These were taken from the top of a railroad overpass on our way into Bernau, which would look pretty nice if it weren't for the damn RAIN!! 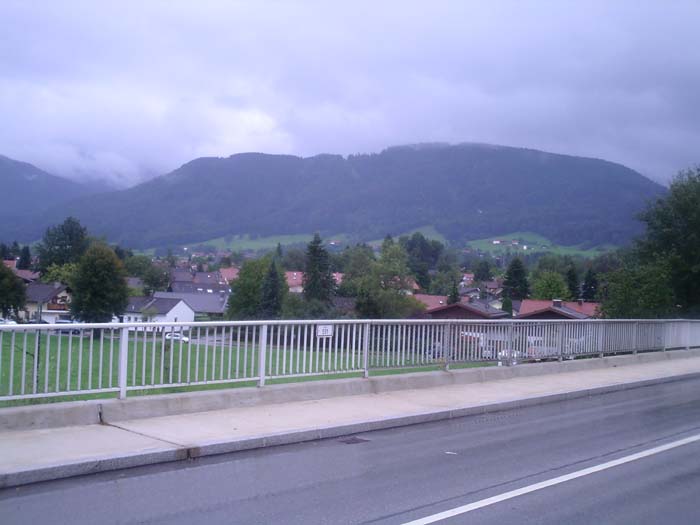 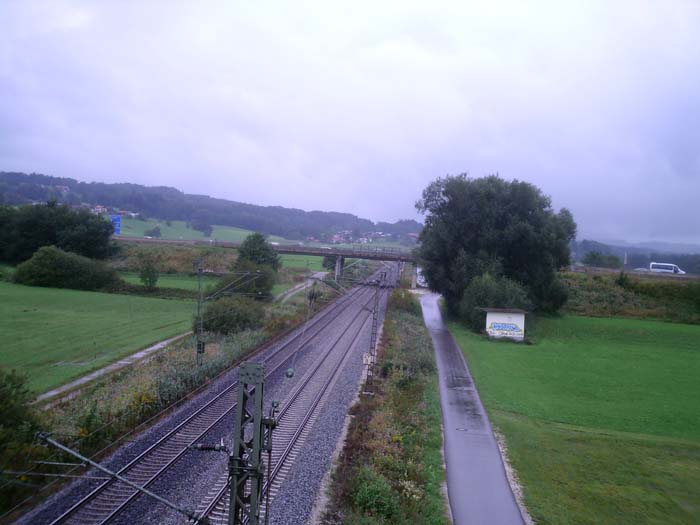 One bonus of heading out of the way to Bernau was that we passed a recognizable store...an Aldi food mart. If you don't know what this is, it's a low cost grocery (usually with just generic brands) that only takes cash, not credit cards or checks. Well, you've already heard me whining a couple times about not being able to find sodas, so we stopped in there to get some. They had 6-packs of a local cola brand called Topstar (and these are not 12-oz cans, they're 1.5 liter bottles) for like 2 euros, which is less for the entire 6-pack than you pay for a little 0.2 liter glass of Pepsi in a restaurant. We picked up this along with some cookies ("American style" chocolate chip) and gummi candy for energy snacks. Here's what the Topstar colas look like (compared to a 20oz bottle), and by the way, they taste pretty much just like Coke: 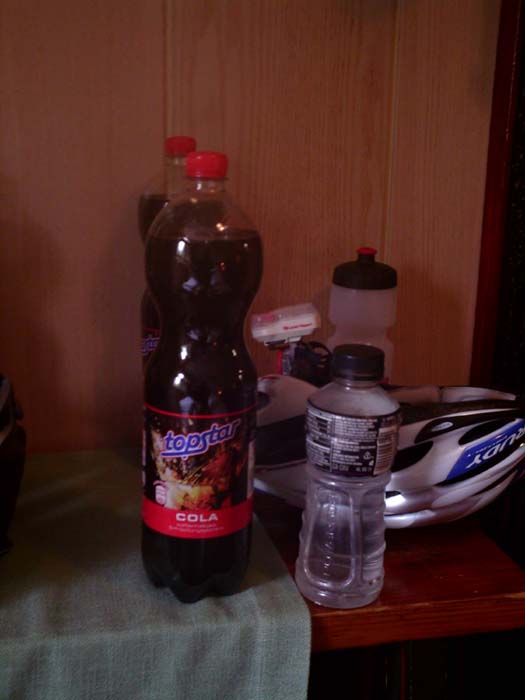 Here's what our hotel looked like (from the angle that isn't blocked by the used car dealership)...what you can see of it, that is: 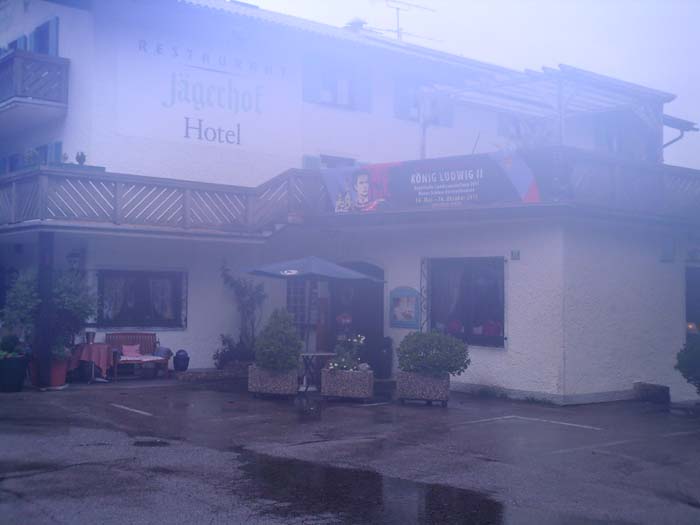 And this is the view out our hotel window. Actually, there's a pavilion out there, and I literally climbed out the window to get this picture. 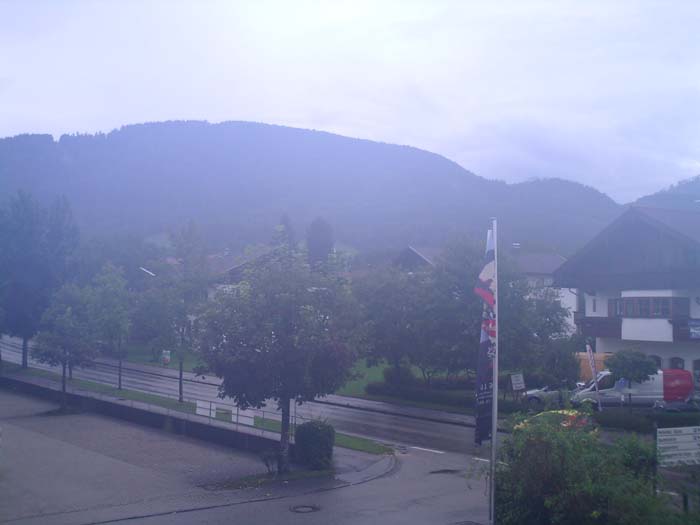 Supposedly, the rain is going to stop tonight and maybe I'll be able to take some less gray and foggy pics tomorrow. The weather will still be chilly, but that's a lot easier to deal with if it's not also wet and windy. Since we're looping around the lake, no matter what direction the wind is from, we're going to have headwinds part of the time and tailwinds the rest, so it should balance out. Theoretically, anyway. We'll see tomorrow.