Loop around Lake Chiemsee
Kilometers: 67
Terrain: Mostly flat with a couple of climbs early
Weather: Mild (a bit cool early on), sunny, light winds (basically the complete opposite of yesterday)

So yeah, the weather today was basically perfect, completely the reverse of yesterday's annoying drench-fest, for which we were immensely grateful since today was to be the longest ride of the tour (supposedly 60km). Since we were in a hotel 10km west of where we were supposed to be staying (as explained yesterday) we weren't entirely sure what the distance would be. Both hotels looked like they were about the same distance from Lake Chiemsee, but you can never be sure with these things, and internet access is so limited here I wasn't really able to do any searches or study any maps online. I've been rather fortunate to get on much at all.

In any case, because we were doing a loop and returning to the same hotel, there was no reason to check out or worry about packing the suitcases. We took our time and had breakfast (again I stuck with cereal) but the hotel people were kind enough to offer us the opportunity to make a sandwich and take some fruit with us for mid-day snacks on the loop. This little gesture probably saved us each about 15-20 euros as we would've not only stopped for lunch but also had to get a snack, seeing as we were out for something like 9 or 10 hours. We resolved to make it up to them by eating dinner in the hotel restaurant (even though it was a bit pricey) instead of some other place in town. The people running the hotel have been incredibly nice so far, bending over backwards to do nice things like dry our wet clothes from yesterday, provide maps and instructions, and so on, which makes it all the more imperative to reciprocate. We'll be sure to point out on our tour evaluation forms how much we enjoyed our stay here, too, so maybe they get more business from the tour company in the future. (Just to refresh your memory, it's the Hotel Jagerhof in Bernau, if you're ever in the area.)

Sometime around 9am we took off and the difference in the weather was immediate. I started off the day's pictures with a double shot of the mountains close by (I put them side by side, so if you have a widescreen monitor you should be able to see these in panorama format). Just compare these shots to anything from yesterday and you can see the difference a day makes.

Here's a closer view of the high bluff overlooking the city: 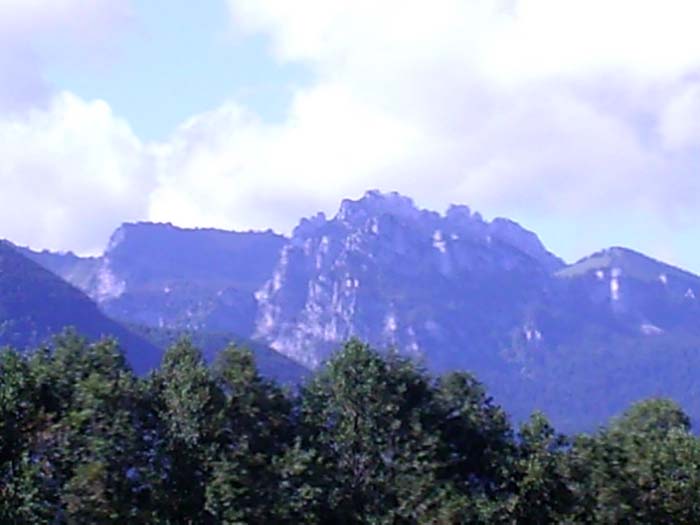 The guidebook told us we should circle the lake clockwise, but the hotel owner said it was better to go counterclockwise because the sun's direction would be more favorable...so we took his advice and went back towards Ubersee before going to the lake. This took us onto a gravel back road that paralleled a railway line. Here's a look at what we were on: 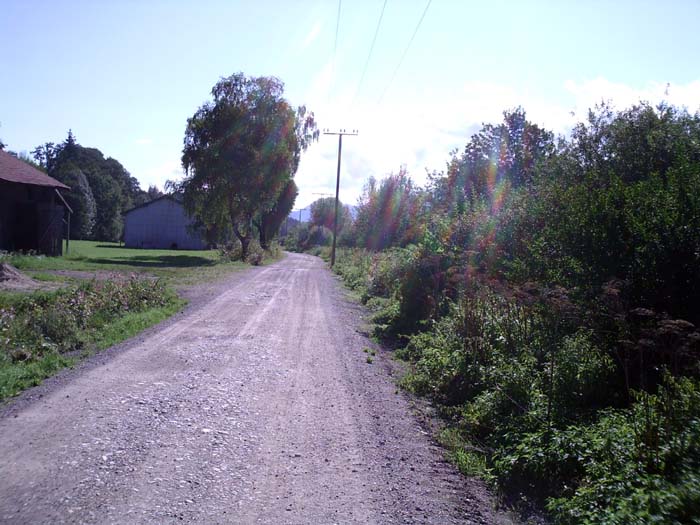 Here's a rare shot of me at our first quick break, just before we started up the hill towards Ubersee. A few seconds after this was taken, I shed the long pants, as it was already getting warm enough to not need them. 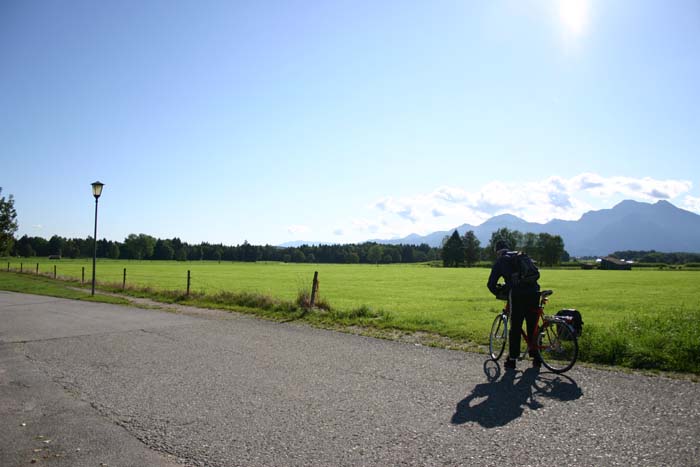 The crushed gravel wasn't too bad but it was still rough and a bit uncomfortable to ride on, so we hoped once we got to the lake we'd be on pavement for the well-publicized "Chiemseerundweg" bike route (we think that translates to "Chiemsee loop path" or something close to it). Well, we were wrong, as the loop was pretty much gravel all day long. Here's a shot of Kelly making his way along through one of the more wooded portions of the trail. Notice the other cyclist ahead of him...this bike route was incredibly crowded, unlike yesterday, when we hardly saw anybody (hmm, I wonder why). 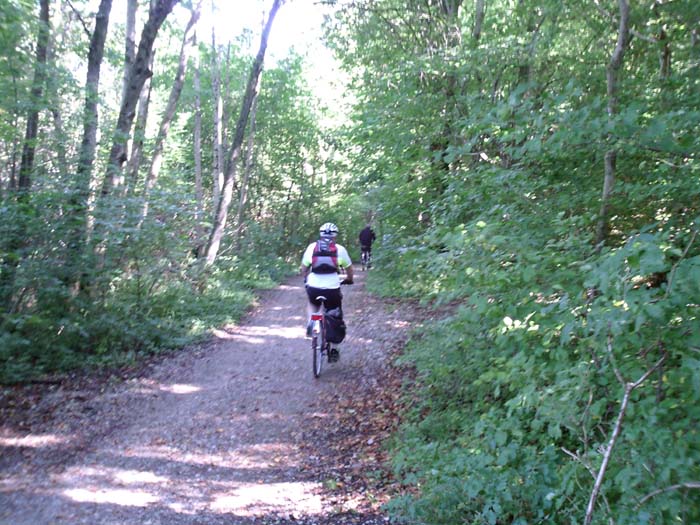 Sometimes the path narrowed a LOT...in this case, to almost nothing. Sorry about the glare. Fortunately we were only on this "goat path" for a very short period of time. 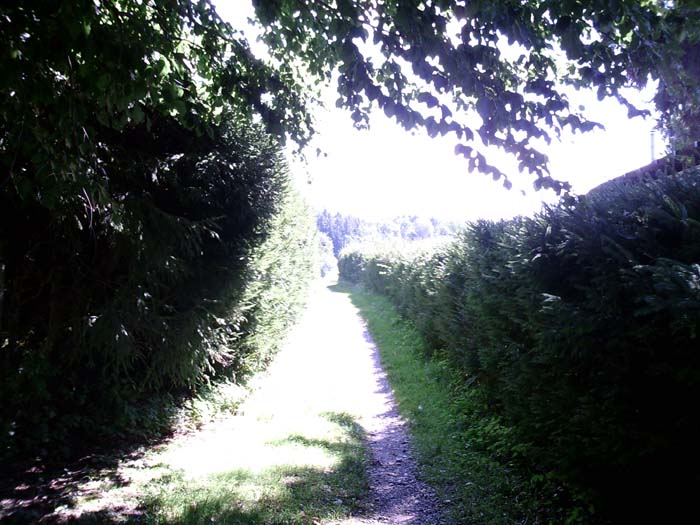 All complaining aside, we did see a lot of amazing views. Here's one looking back at the valley south of the lake: 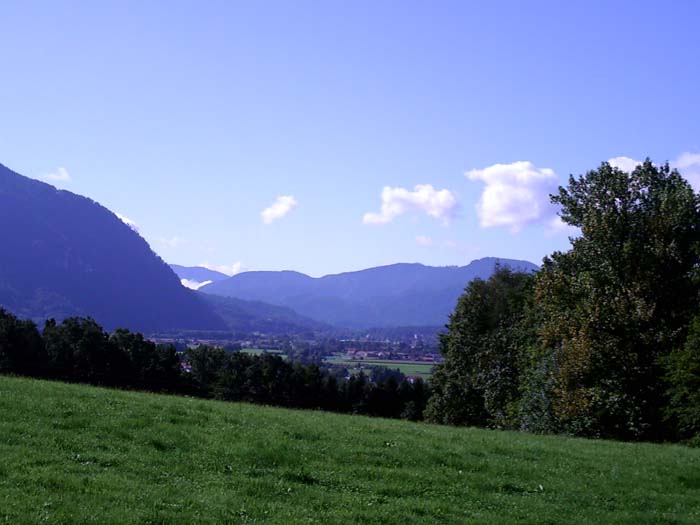 On the way to Ubersee, before turning north to get to the actual lake loop, we had to climb a fairly impressive hill, at the top of which we were able to enjoy this great view (again presented in panoramic mode):

The descent began a short while later and took us down into that area you see in the photos. After that we meandered along for a bit, working our way northeast, until we finally reached the lake. Here's our first view of it, but it will get much better, I assure you: 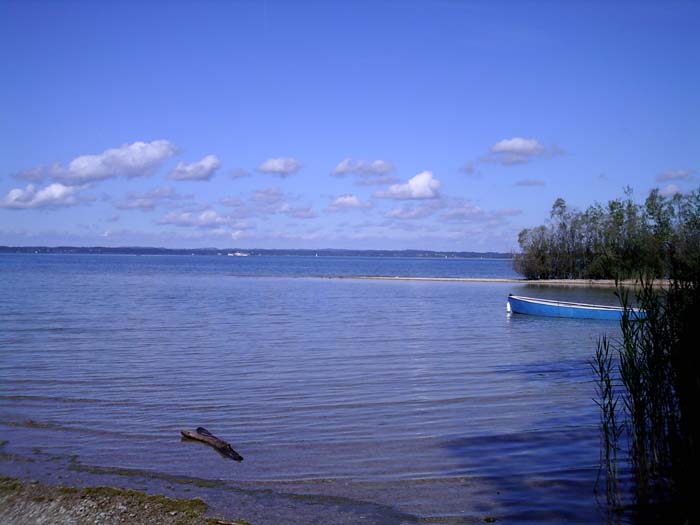 Another view, this time looking back the way we'd come, at the Alps in the background: 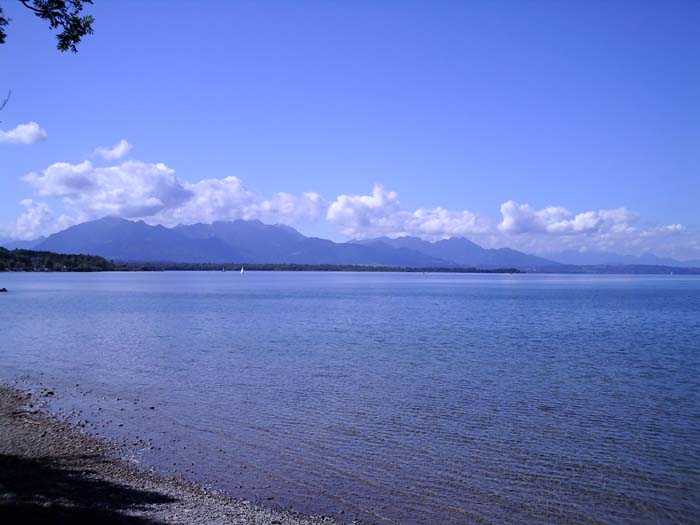 This was taken near Chieming, where we could've stopped for lunch but decided to press on since neither of us were all that hungry. We rode along for another hour or so before reaching Seebruck, on the north end of the lake, which was about the halfway point (or so). Here we ate lunch in this nice little park, and also refilled our water bottles. Water turned out to be no real problem today as there were plenty of facilities along the way. 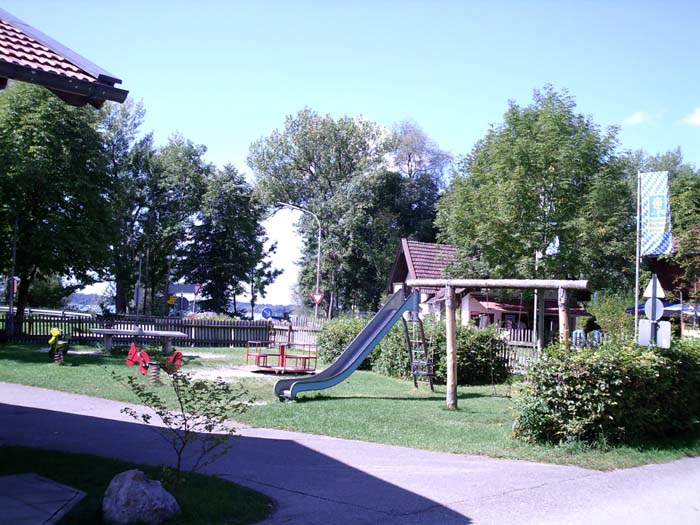 This is the center of Seebruck. See that tall tower thing in the middle there with all the symbols on it? I have no idea what those are for, but every town seems to have one. Also, the cyclist in the lower right indicates the route we took from here, which was a left turn from the direction we'd been going. Not all our turns today were that obvious (you couldn't always see the lake to get your bearings) and there were no handy "E" markers seeing as we were going the wrong way around the lake (plus we were in a hotel the Eurobike people didn't really plan for when they put out those symbols). The bike paths made a lot of funny turns and following the map was difficult at best, so we did a lot of "well I think the lake is over there, it must be this way" all day long. 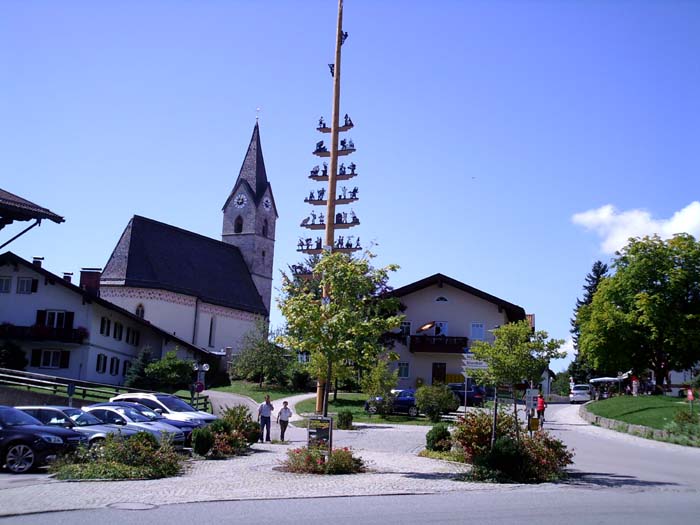 Here's a really nice look at the lake from a marina we passed by: 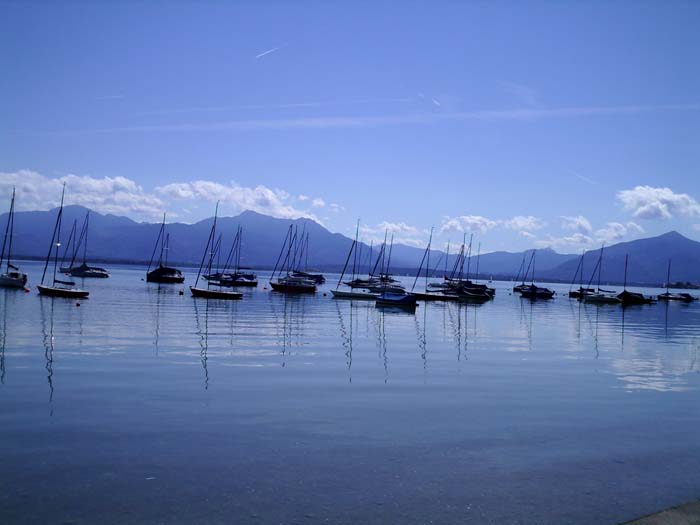 One thing we'd already decided to do before leaving this morning was take the ferry out to the islands in the middle of the lake (these were Herrenchiemsee and Frauenchiemsee, the first of which had an old palace on it, the second of which used to have a church and convent). Most of the rest of the pictures in today's batch are from one of these two islands. This one shows the latter island as well as the ferry about to dock with a load of passengers. The ferries were for the most part very crowded, as were the islands themselves, but not so much that you had to wait long for a ride. 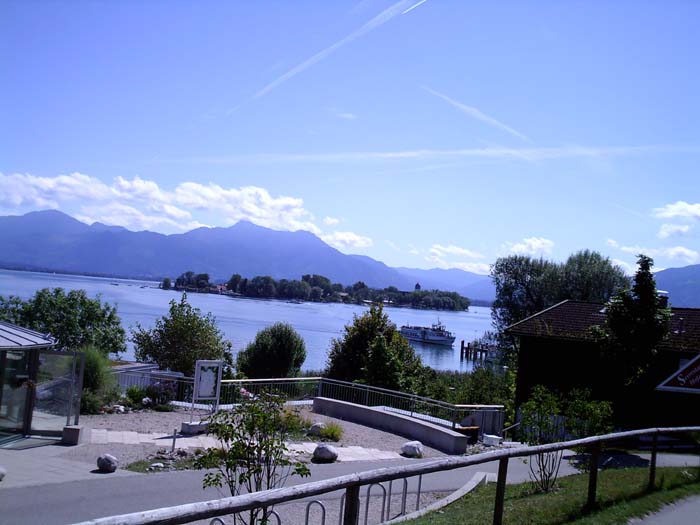 Here's a better shot of Frauenchiemsee, which we went to last (the ferry was passing by, so it made a good first pic from the boat): 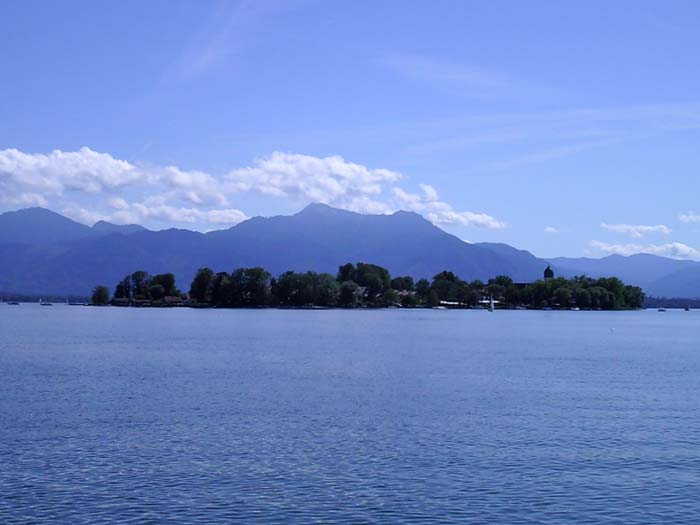 This is looking back at the town of Gstadt, where the ferry landing was: 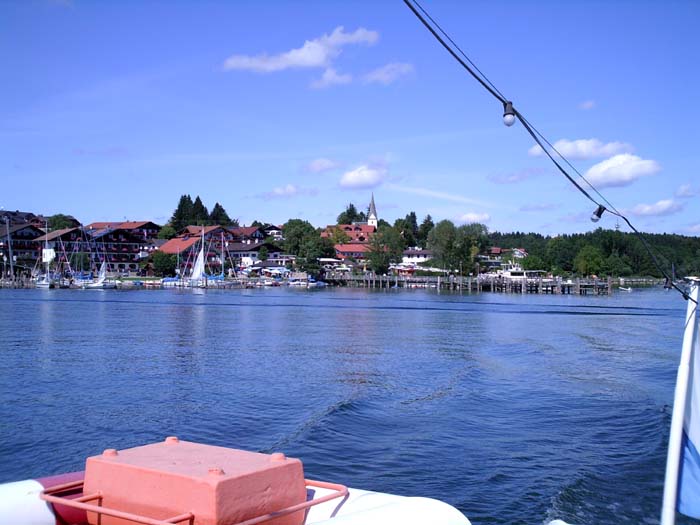 Another nice picture of the smaller island. Sailboats like this were everywhere on the lake, which as you can see is pretty smooth today. We didn't see any waterskiers or parasailers, though. Maybe the water was just too cold? 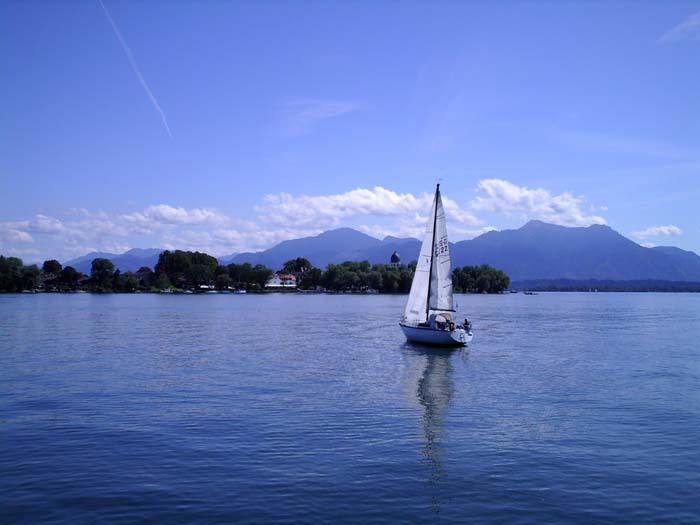 So after about 5 minutes we made it to the dock on Herrenchiemsee, and this should give you a good idea of the kind of crowds there were today. Incidentally, we couldn't bring our bikes onto the island (well, we could, but it cost more and you weren't allowed to ride them, so seriously what's the point?) 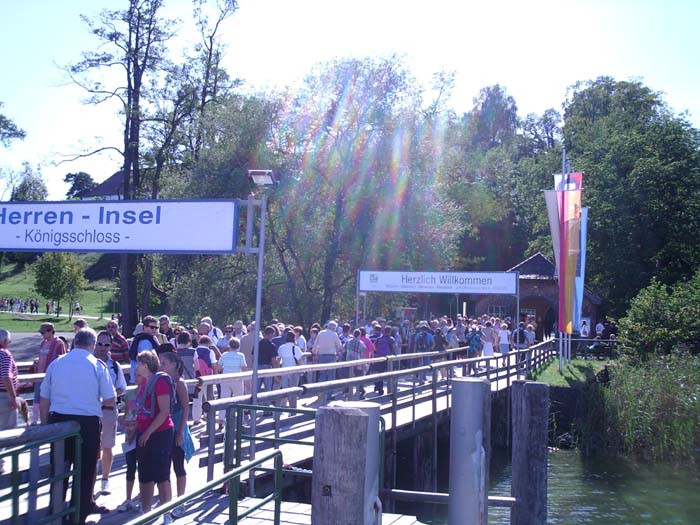 After arriving we chose not to pay for a (very expensive) guided tour and instead just walked around. All the various buildings and places had descriptive signs in both German and English, so we had no trouble figuring out what was going on. First off there was this old church (it's amazing how intricate the interiors are in these ancient buildings): 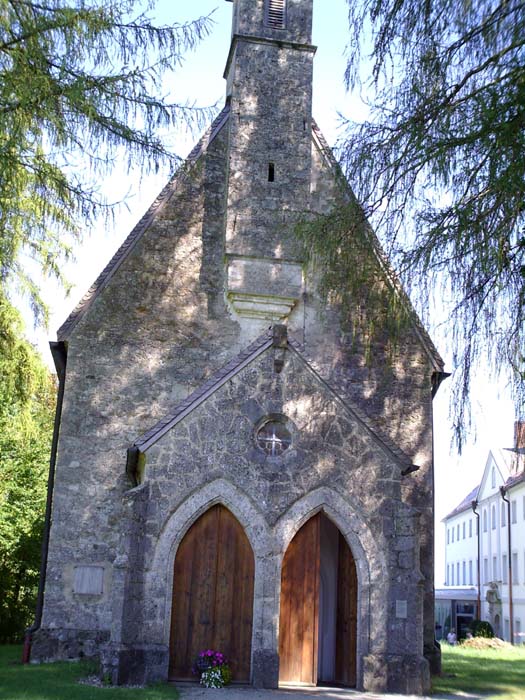 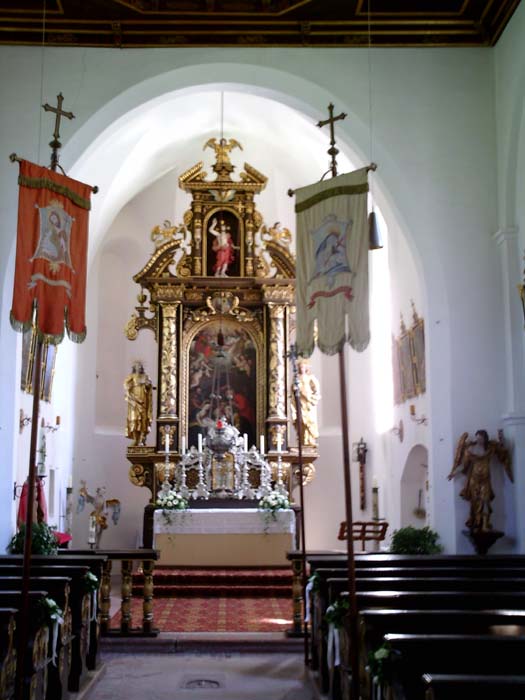 Next we came to an old cloister that was half in ruins. The interior had been restored and the gardens were being tended nicely, though. 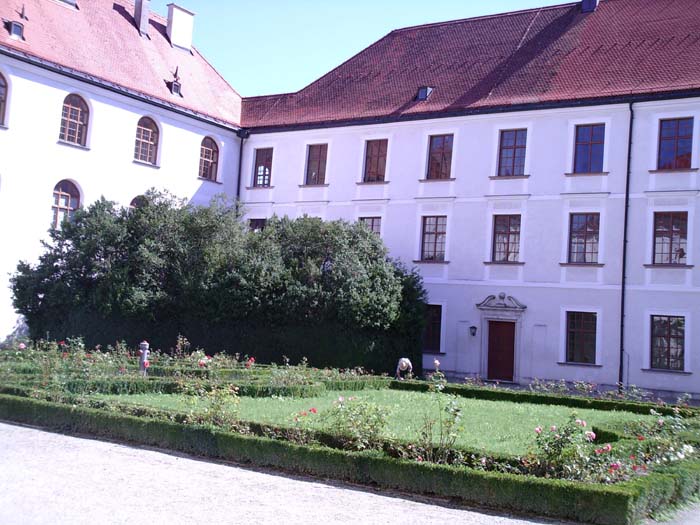 After this there was a LONG walk (about 15 minutes) to the palace once owned by King Ludwig II. Pretty nice place, huh? Considering it was located on this island in the middle of a lake, it's quite impressive. 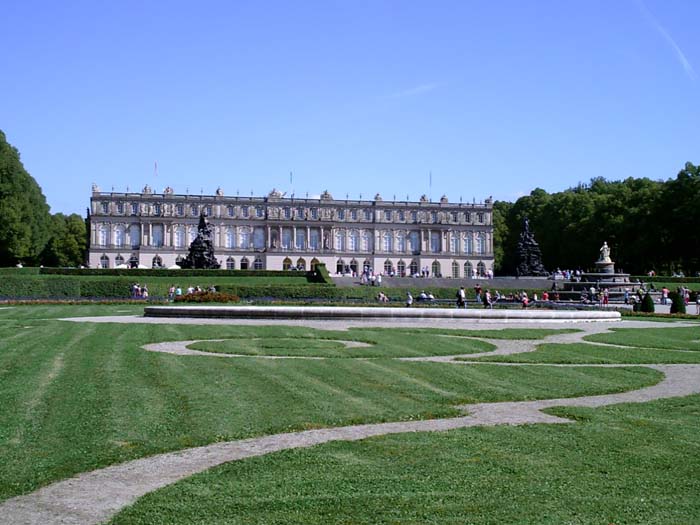 One of the statues in the fountains outside the front of the palace: 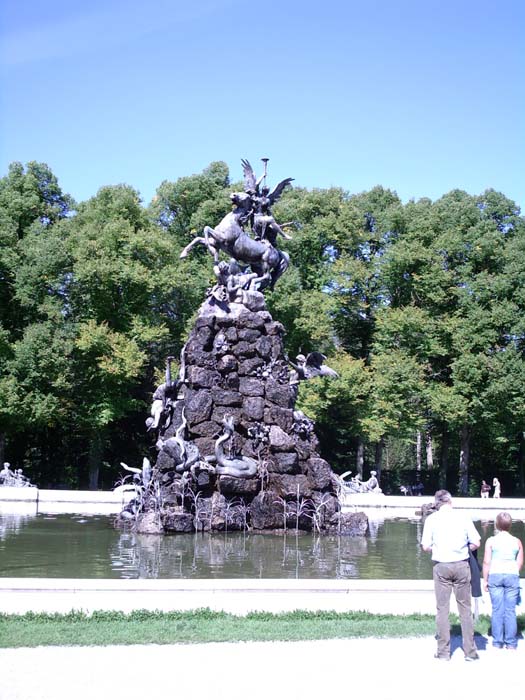 An amazing piece of art just inside the entrance to the palace: 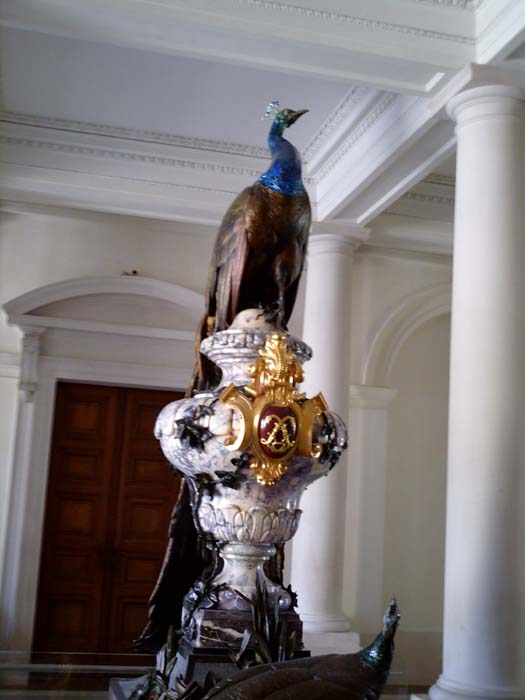 This is the back side of the palace, and you might be thinking why make it so nice when most people are going to approach from the front side...? 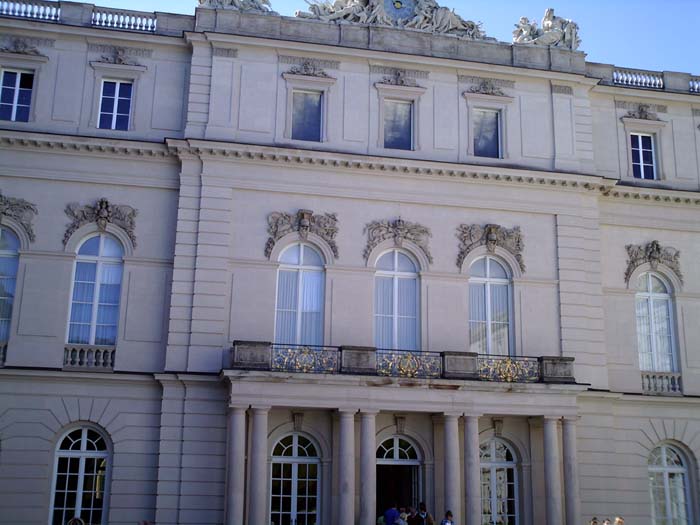 ...well, as you can see here, from this view looking the opposite way, there was a path leading down to the water's edge. Visitors to the royal palace would land there and advance to the palace from this direction, so this side was actually the first view they'd get of the place. The courtyard here is like 120' wide so there's plenty of room for any sort of reception the king wanted to throw for his guests. 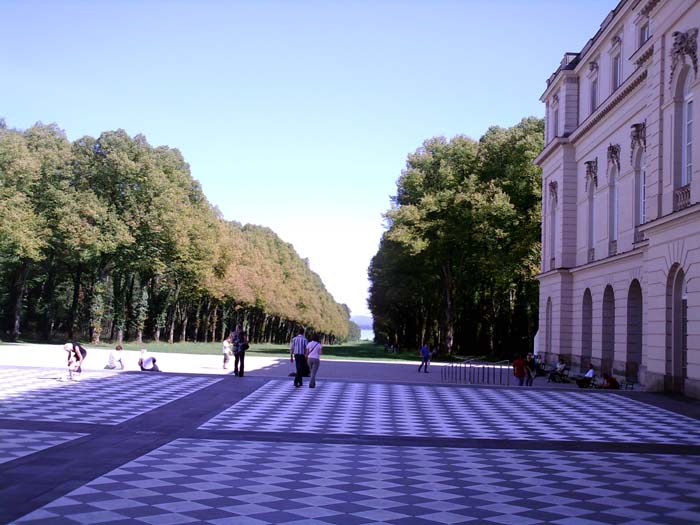 Inside the castle you got to look at amazing architecture and design like this: 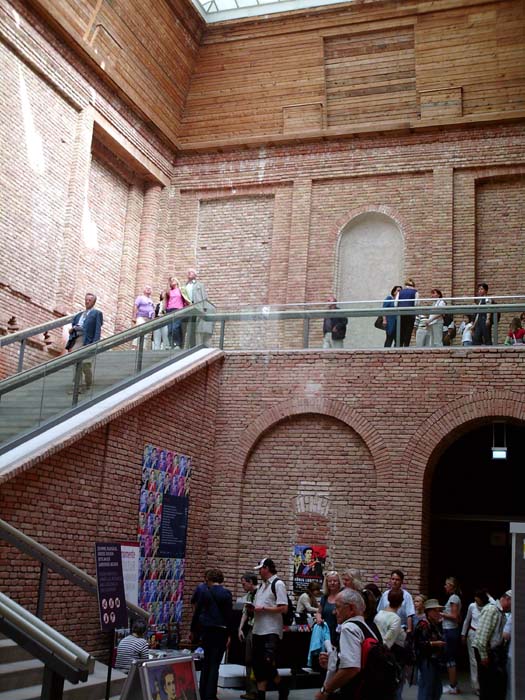 This is where the guided tours of the Ludwig II exhibits started, but since we're cheapskates we didn't shell out the 9.50 euros each (about $15), we didn't do that part. It's just as well as we probably would've been here way too long if we tried it.

Anyway, after this we went back to the ferry landing and got on the boat to Fraueninsel, where there was an old church and convent. This island was much smaller and easier to walk around (after the ride so far today and the walk to the palace and back, our feet were starting to complain). Here's a picture of the view from this island...again representative of the amazing weather and scenery we were able to enjoy today. 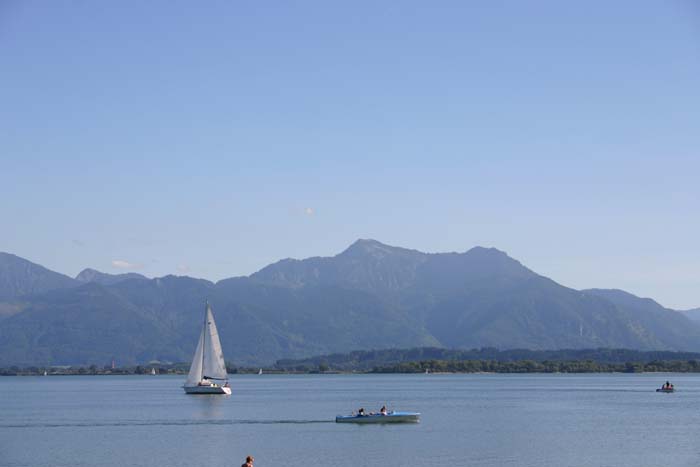 Now for a couple of views of the convent and church tower near the middle of the island: 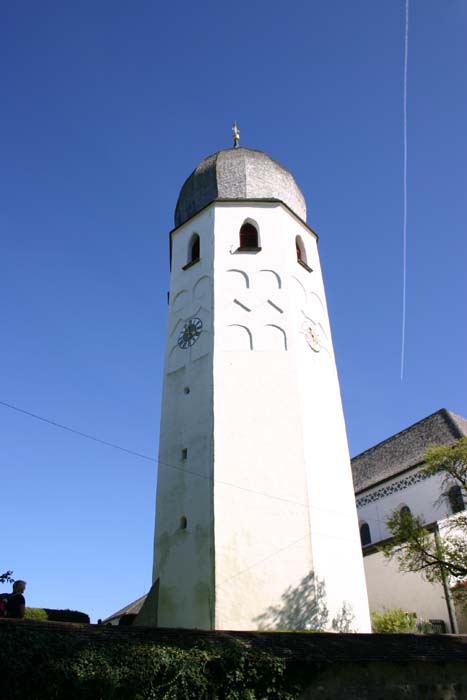 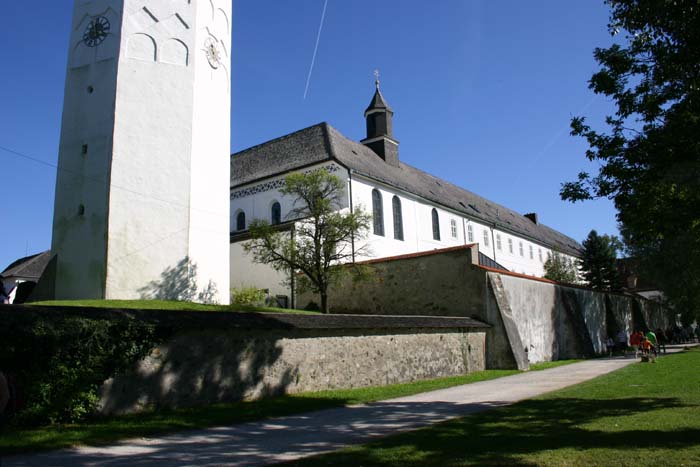 The interior of this church was absolutely stunning, but unfortunately they didn't allow pictures so we weren't able to get any shots of that. Instead, we headed back to the boat, returned to Gstadt, and headed on back towards Bernau. The ride the rest of the way was pretty easy (although of course the crushed gravel path was annoying) and we didn't really see anything else that new or impressive that we hadn't already taken pictures of. I will instead leave you with a single shot of the approach to Bernau, about two minutes from our hotel, as we headed up some narrow singletrack towards the main road. 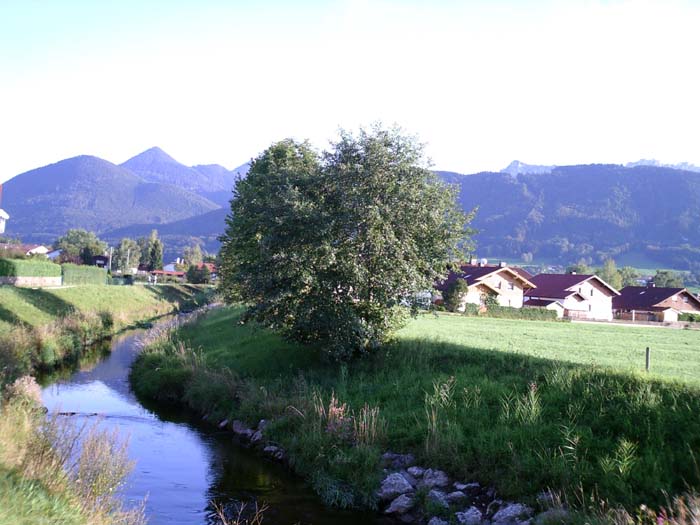 So that was a busy day...now to get some dinner (wienerschnitzel tonight!), relax in the hotel and get a good night's sleep before tomorrow, when we return to the hills.