With so little sleep yesterday, I expected to do a little catching up tonight. I did enjoy a bit of TV, though, because this'll be the last time I get to watch anything for a few days...I have reservations at campgrounds the next two evenings, and they won't have cable (or internet, for that matter, so expect daily posts to be late). Sometime around 11:15 I almost dozed off in my chair, so I gave up and went to bed. Almost 11 hours later, I woke up. I've been known to sleep 8 or 9 hours sometimes, but 10 is rare and 11 is basically unheard of. So, yeah, I must've been tired.

Even with all that sleep, I didn't really need to hurry. Everything was mostly packed already, so it didn't take long. I hit the road a few minutes after 11, using up every last minute before check-out. By this point I'd gotten both excited and worried about the ride, because on one hand I couldn't wait to get going, and on the other, it was gonna be hot. While I'm used to hot and humid summers in Ohio, those hadn't really come around yet so I didn't have any real practice this year. Plus, it's a lot easier when you're close to home and can easily get supplies and bring along all the water and Gatorade you can carry. Plus, I really don't like riding in those super-hot and humid conditions anyway.

The wind helped out, coming up out the south, and as the route took me mostly northeast, I didn't need to do battle with that. Unfortunately, most of the time the wind got blocked, except on when crossing between islands. By the time I got about 10 miles, I'd already started to feel that sort of wasted, almost nauseous feeling that comes with your body overheating. By this point my first water bottle was gone, so I took a break and started on the other one, refilling both at a handy gas station. This became the pattern of the day...draining all or most of my water and then hunting for a good spot to refill. The second time was at lunch (some fried chicken at another gas station), the third time at a ranger station at Bahia Honda State Park, and so on. I think I refilled the main (32-oz) bottle something like 6 times today, the backup (24-oz) one 3 times, and somewhere in between had a 64-oz lemonade and two refills of a McDonalds Hi-C Orange drink. That's a lot of liquid, and damn near all of it left my body in the form of sweat.

After 45 or so miles of riding, I came to Marathon, where I found not only that McD's, but also a K-mart and a Winn-Dixie, all in a nice little cluster. Perfect, because I needed to get some snack-type supplies (cookies, yay!) and a couple items I forgot or lost (such as toothpaste, and a new electric shaver, seeing as I managed to send that back home in the bike box). Plus, at McDonalds I picked up a 20-piece chicken nuggets pack for dinner later on, when I actually started getting hungry. Which, as I write this at 8pm, is right about now.

After that, the campsite wound up being only about 7 more miles down the road. It's a nice, cozy little place with a security gate and plenty of nice neighbors to talk to. I'm not sure it was worth 45 bucks, but that's dirt cheap compared to hotels in this area. I feel like I'm back in Santa Barbara or something. Anyway, I set up so my tent's screens will let a nice crosswind through overnight, so hopefully I won't get too hot. It seems a whole lot less oppressive now that the sun's setting.

And now for today's pictures. What's riding in the keys like? Well, basically, you can't get lost because there's only one road, sort of like Canada. (THAT'S A JOKE, please no hate mail! I actually like Canada.) US-1 is mostly a two-lane road with a (normally) nice shoulder and occasionally a bike path, although those come and go seemingly at random. Here's a couple of shots of ordinary stuff you might see while riding along. 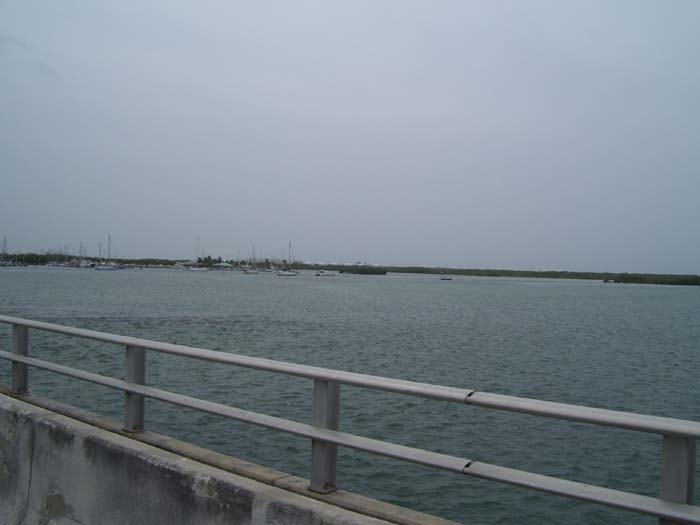 This was one of the few times early on where I had a bike path. 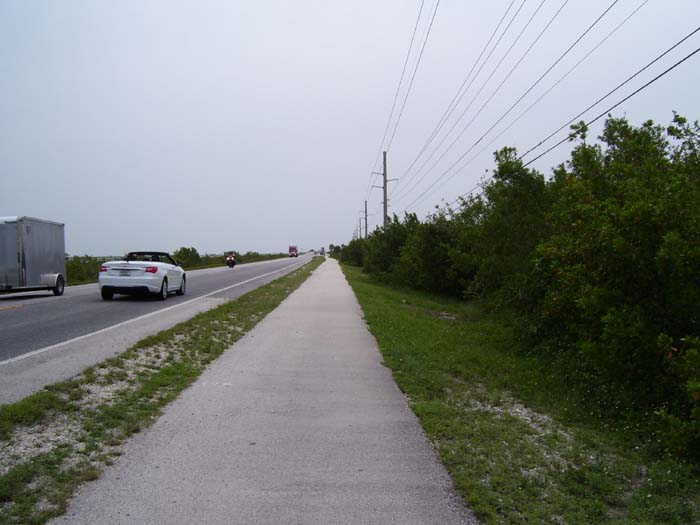 Quite often I found myself crossing between keys and off to my right I'd see the next key extending south, where it'd inevitably be packed with houses. Also, on some of these bridges, people would be fishing. Those power lines overhead were tangled up with fishing line in more than one place as I rode along. 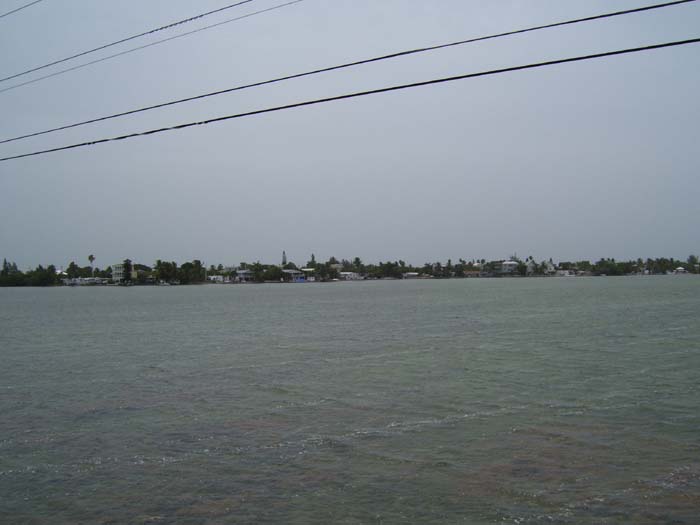 Here's a road that's actually crossing between keys. To the left there, you can see an old pedestrian/bike path that's fallen into disrepair. Most of the time, because of that, I'd have to ride along on the shoulder, but as you might note, it's pretty wide and in good repair. 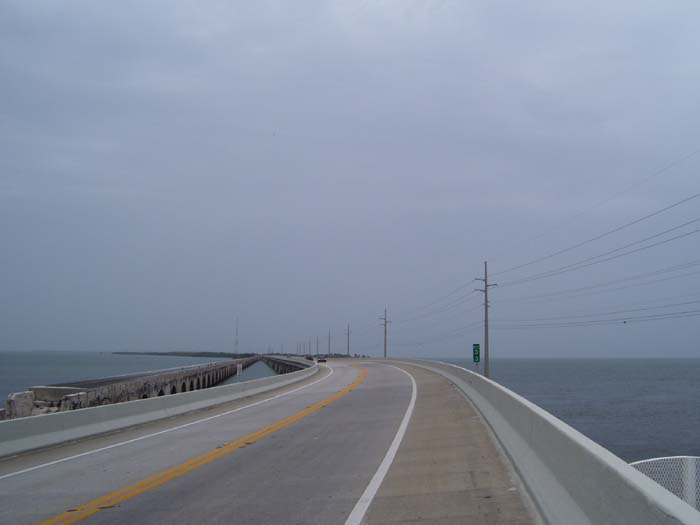 Here's where I took my first break, a nice little gazebo in the Saddlebunch Keys. Very pretty and comfortable, but unfortunately, no water, so I had to get some at a gas station a short distance later. 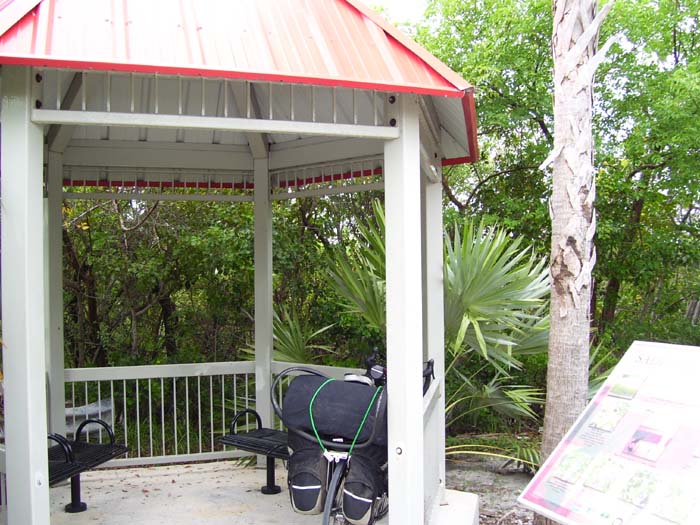 To the right of the gazebo there's this nice placard here (I didn't see most of those things, at least not close by). 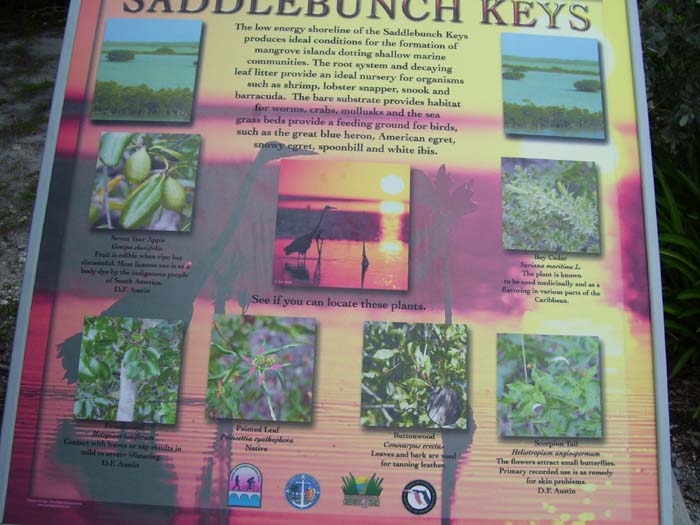 This is what I mean when I say the bike paths sometimes just ended unexpectedly. See how this one here just dead ends? And you'd think they'd make a little spur so you could hop over onto the shoulder there, but nope. After a while, I stopped using these paths, for the most part. 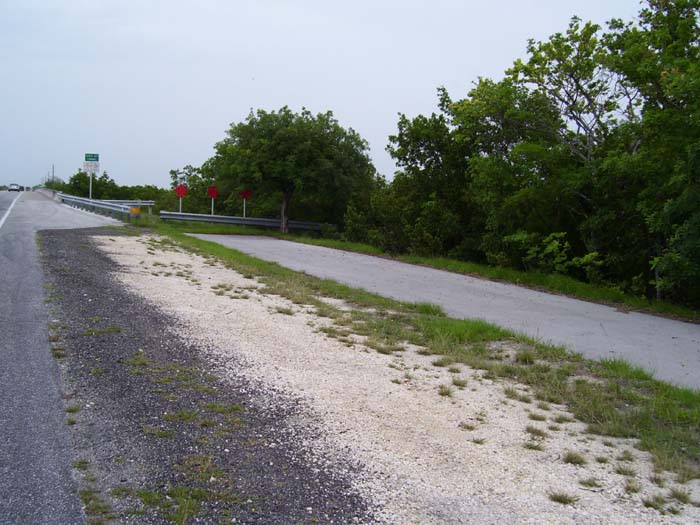 Here's another reason not to use these bike paths. This particular one made it almost all the way over from Bahia Honda, but not quite. 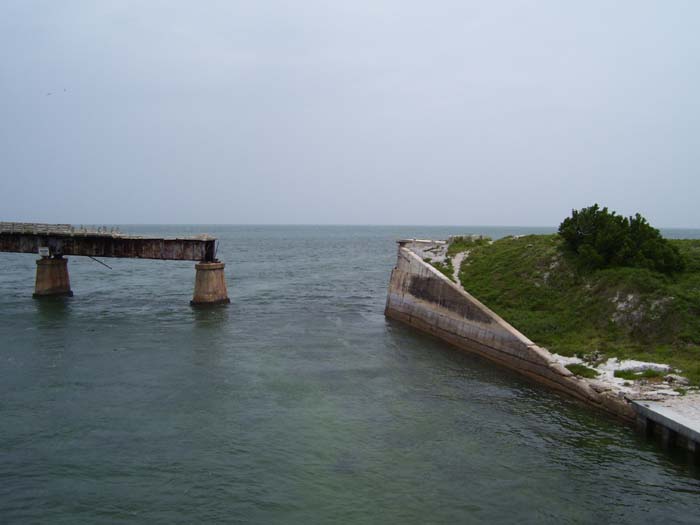 Speaking of Bahia Honda, here's the state park there, which had some campgrounds and day use beaches. I chatted with the rangers for a bit (enjoying the air conditioning and cold water) but even though someone suggested I check out the park in more detail, I decided not to, primarily because there was a fee to get in and I'm a cheap bastard, but also because I'll be staying at someplace almost identical to this later on. 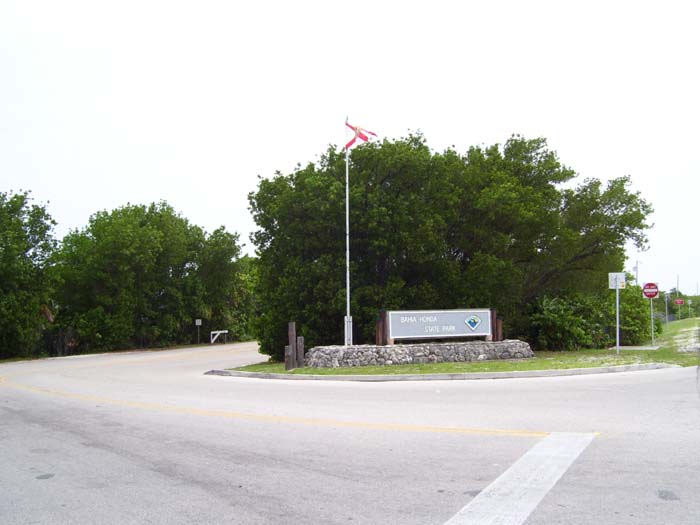 Shortly after that stop I found out I can't quite get away from Ohio as easily as I thought... 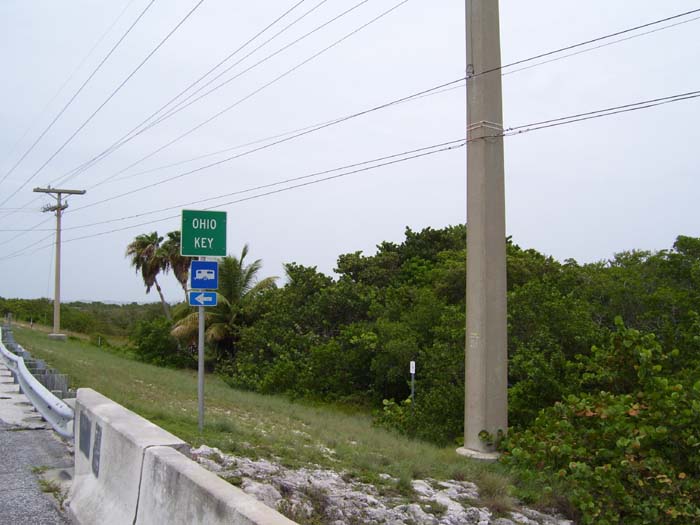 And shortly after that, I came to the infamous Seven Mile Bridge, which is a LIE, because it's only 6 and 3/4 miles long! I got ripped off! False advertising, I tell you! I want a refund! 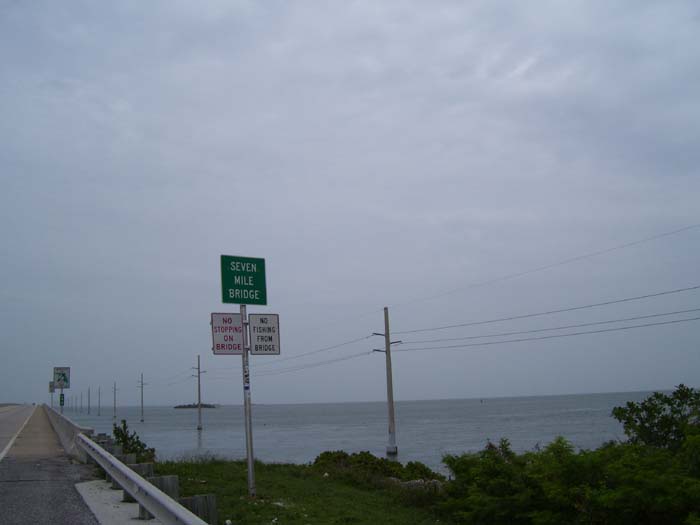 About 3 miles in, the bridge started to curve right, just after this tiny hill (an arch so boats can pass by underneath), and this turned out to be my biggest climb of the day. Yep, that's right, for about a minute I was actually CLIMBING! 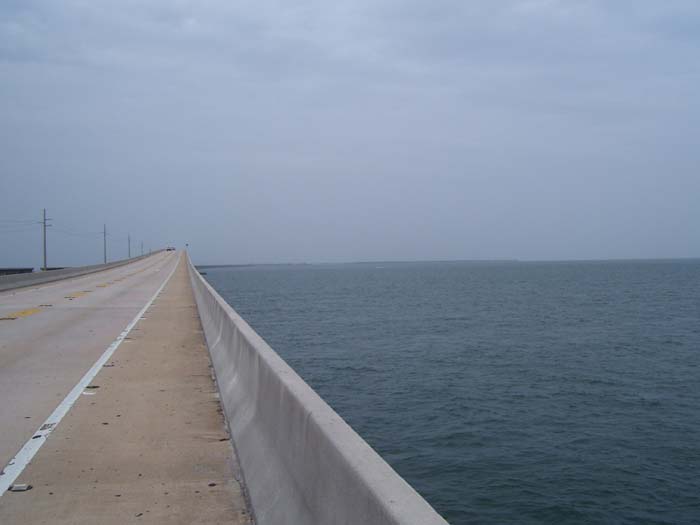 Here's the entrance to my destination for the day, Curry Hammock State Park: 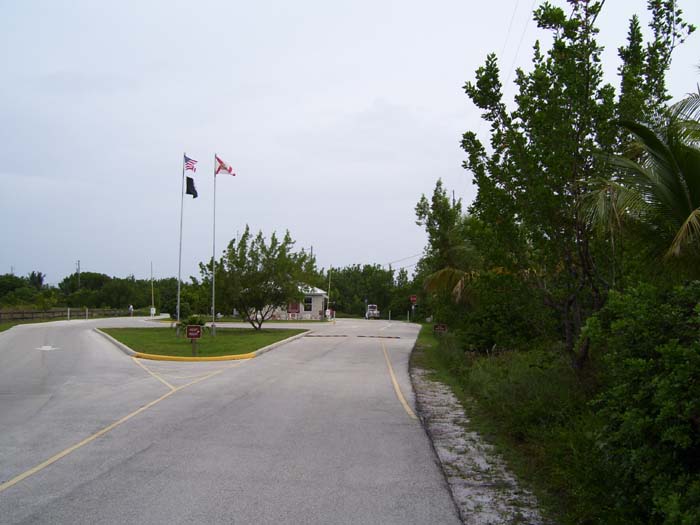 This is what it looks like from the second floor of the restrooms and showers. Not very big, but very comfortable. The wind comes in right off the ocean, and I managed to stay mostly cool, even as the mosquitoes feasted on me. 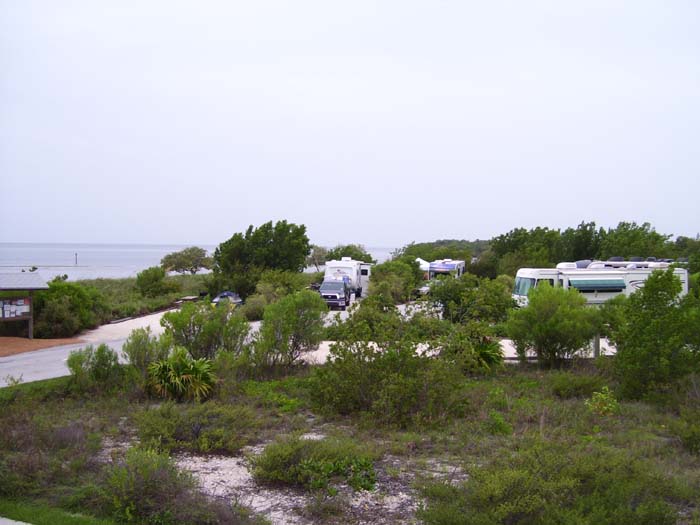 And here's what my campsite looks like. Impressive, huh? The ground's very sandy, so I didn't really have much trouble getting the tent stakes in. 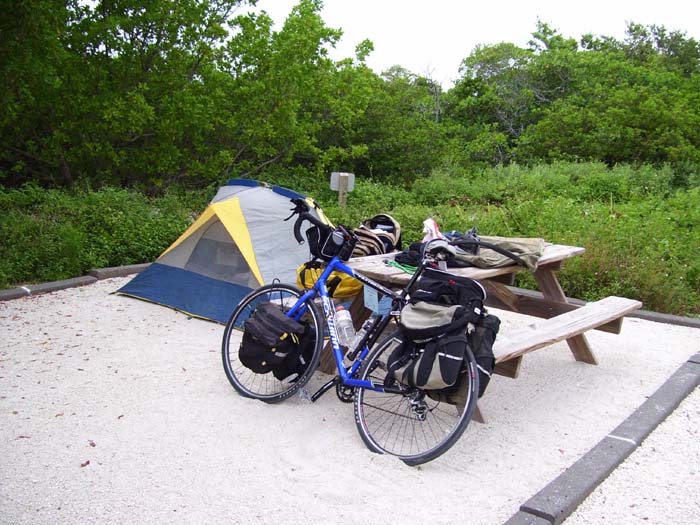 In addition to the mosquitoes, I also had to share my campsite with these guys, who were everywhere! 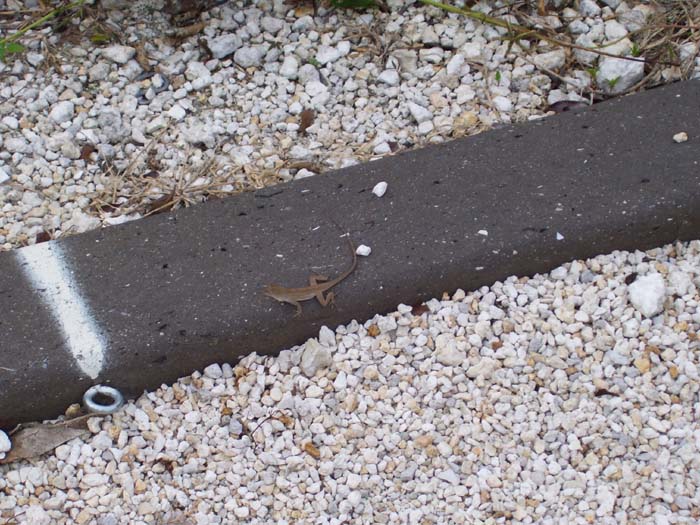 And that's basically it for the first day. Tomorrow, it's on to another campground!