As usual, a night in a tent basically sucked, and even worse this time because it never got below 80 degrees, so it felt like sleeping in a sauna. I woke up off and on all night long, a couple times to use the restroom (which is one more time than yesterday) but most of the others just for being uncomfortable. Then at 8AM some idiot woke me up with a cell phone spam call...you just can't get away from that, even down here in the Keys. They were doing a survey of cell phones and used an auto-dialer to deliberately call people on their cells, which I could've sworn was illegal. Too tired to deal with it anyway...

Also, as with every other bike tour I've been on, I started feeling sick at my stomach and the semi-nausea didn't let up all day. In addition to battling the heat and humidity, I had that to deal with, too. The pattern basically degenerated into riding 4 or 5 miles until I started gasping for breath (the warning sign that I'd overheated beyond the ability of sweat to control) and then stop for half an hour or more, preferably somewhere air-conditioned, but if not, just anywhere in the breeze would do. I didn't feel much like eating, and after finally forcing down a sandwich at Burger King several hours later, I still didn't feel any better. Pretty much nothing worked. Even sitting in an air-conditioned room for an hour didn't do anything, as I found out later around 4pm, when I almost passed out from the heat. At that point I did lie down and nap for about 10 minutes, but that didn't really help, either.

As a result, today wound up being quite miserable, and I have very few pictures of any real interest. It took almost 10 hours to go the 50 miles or so from one campground to the next, about the slowest I've ever gone 50 miles, but there's no way I could've made it there any faster. In the end, I'm glad to have made it at all. No more camping in this kind of weather (after tonight) if I can avoid it...I'll be looking for actual hotels tomorrow night, somewhere in the Miami area. In fact, if tomorrow winds up being as exhausting as today, I may not even bother trying to get that far...I'll just get through the Everglades and look for the first cheap hotel I come to. (My cheap hotel requirements are, in descending order of importance: bed, shower, wi-fi, TV, and nearby food...that's about all that matters.)

But enough about tomorrow...here's the few pictures I managed to take today. Not a whole lot of interesting things, I'm afraid. This first one is some of the mangrove-infested terrain around where I camped yesterday. 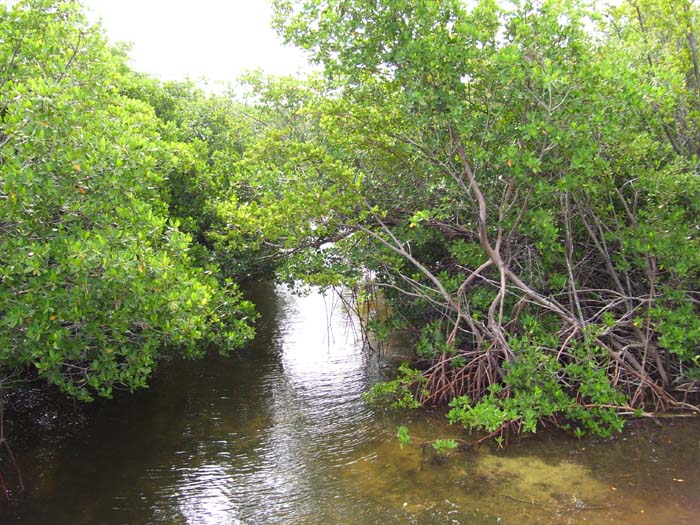 This road is typical of what I saw most of the day. Trees on one side, water on the other, sometimes mixed around, or with more water or more trees...and not a lot of civilization, until I got close to Key Largo. 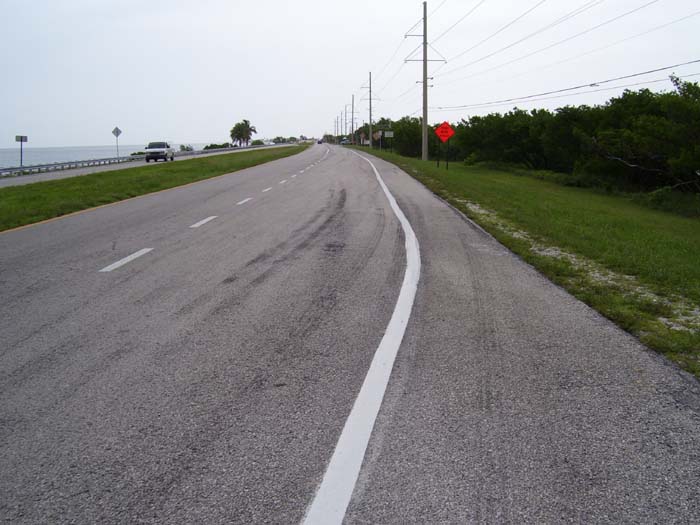 These birds were everywhere, and would sit on anything. 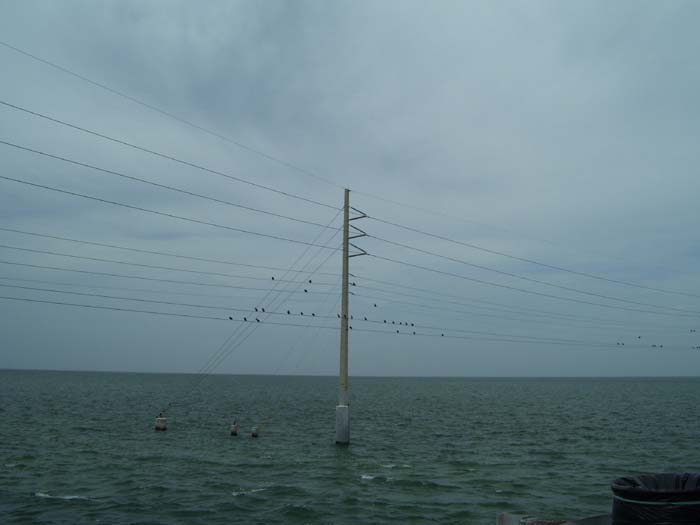 Another road typical of today. I'm coming down a slight slope, because this is one of the few times I had to deal with any climbing at all. Some of the roads between keys have arches to let boats go underneath. 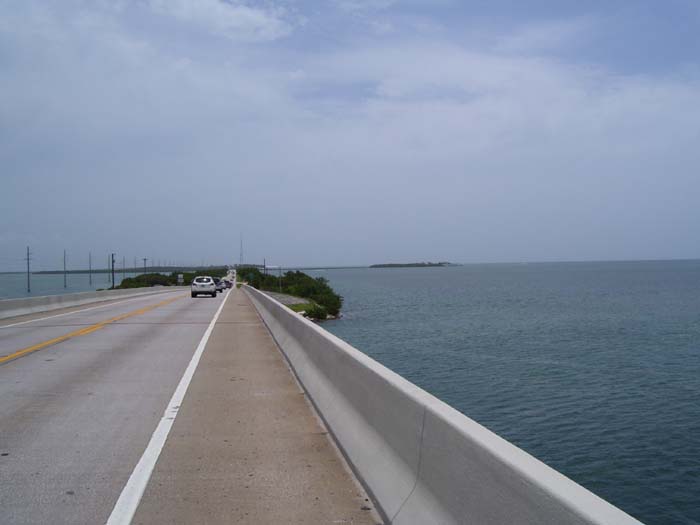 Looking off to one side or another, I often saw populated areas directly across from wildlife refuges. 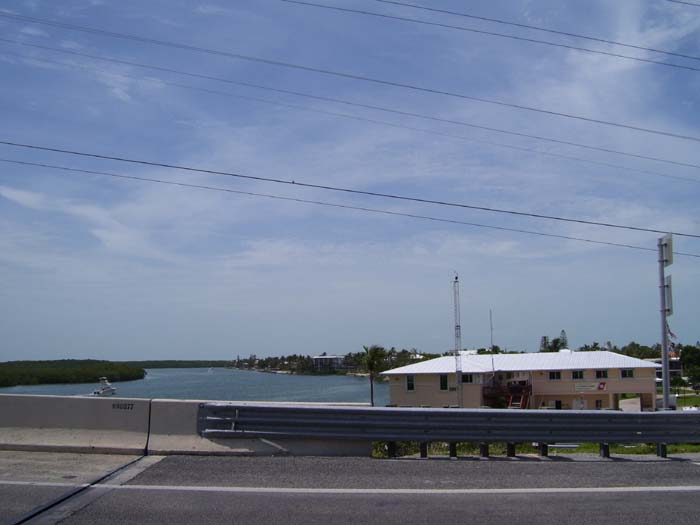 Run! The lobsters have mutated! 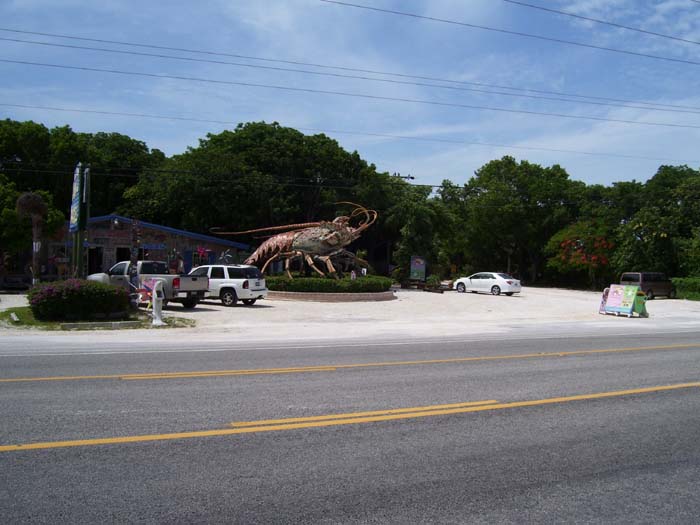 After a while the road widened and things started to look more like this. The closer to Key Largo, the less water visible in any direction. Also, the bike path returned, although it was somewhat difficult to use because all the tree roots underneath had made it bumpy. (Florida, that's a hint...a little path maintenance, please!) 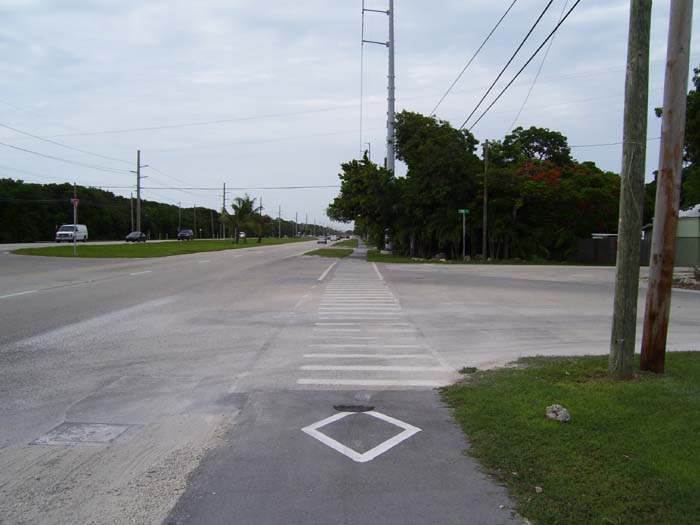 Finally, after what seemed like an eternity, I got to my destination...John Pennekamp Coral Reef State Park. 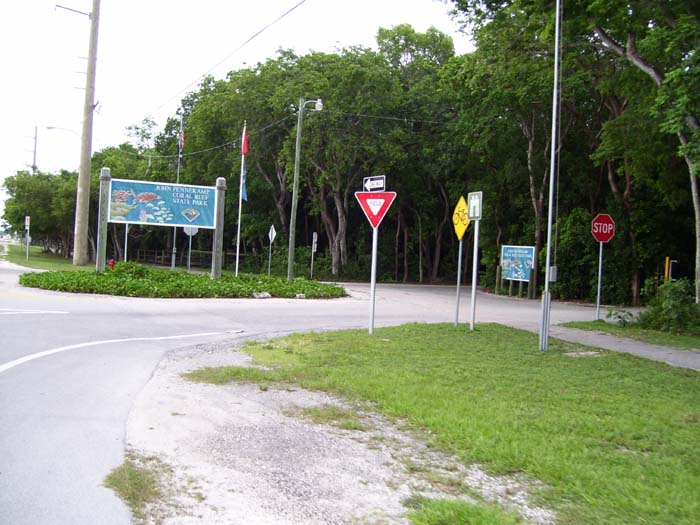 Since I got there after hours, nothing much was happening. A peaceful place, really. 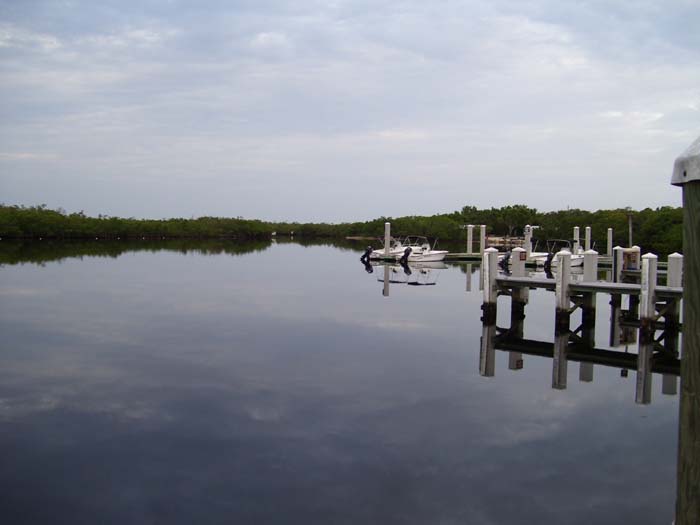 You can go snorkeling offshore, and they've even sunk a replica of a Spanish ship out there somewhere, so you can dive around like you've found a real shipwreck. 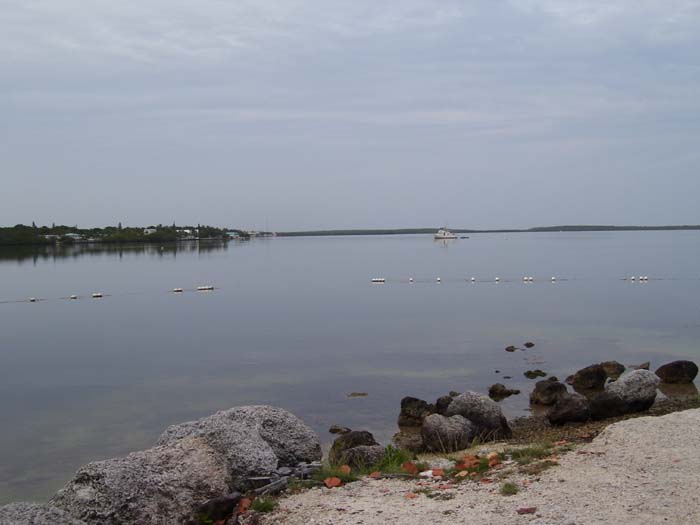 After this little tour of the park, I got dinner at a local Italian place (spaghetti and meatballs this time, not pizza...maybe something different will help quiet the stomach), rode back to the camp in the dark (about 3 miles), and worked on this blog until bedtime. Now, if I can survive another night in the tent sauna, we'll see about getting to a hotel tomorrow.