I awoke today to the sound of rain falling, which totally didn't agree with last night's forecast at all. I kind of hoped that would mean the winds might change, too, but nope...they stayed out of the northeast all day. However, that's about the only thing that went wrong. The temperature stayed reasonably comfortable (in the low 80s), the humidity didn't climb too high, and it never rained again. If only that wind had shifted about 60 degrees to the south...but you can't have everything, I suppose. Perfect cycling days are extremely rare, and besides, if they were always perfect, there'd be nothing for me to whine about, right?

So anyway, to try fending off the constant "butt pain" that's been steadily increasing for the last week, I tried something new...I wore two pairs of bike shorts instead of one. I know, that sounds silly, but it actually worked, I think. The problem didn't go away completely, but at least at the end of the day it didn't hurt nearly as much as yesterday, and I could actually sit in a chair in my hotel room instead of having to lay on my stomach all night long.

So I left shortly after 10am and almost immediately came upon this fort called Castillo de San Marcos, an old Spanish outpost that used to guard St Augustine from British and pirate attacks, and later was taken over by the US and turned into a shore battery. You can go inside if you fork over some cash, but not only am I too cheap to do such things, I also didn't want to leave my bike and all that gear sitting outside. So instead I just rode around taking pictures of the outside....like these here. 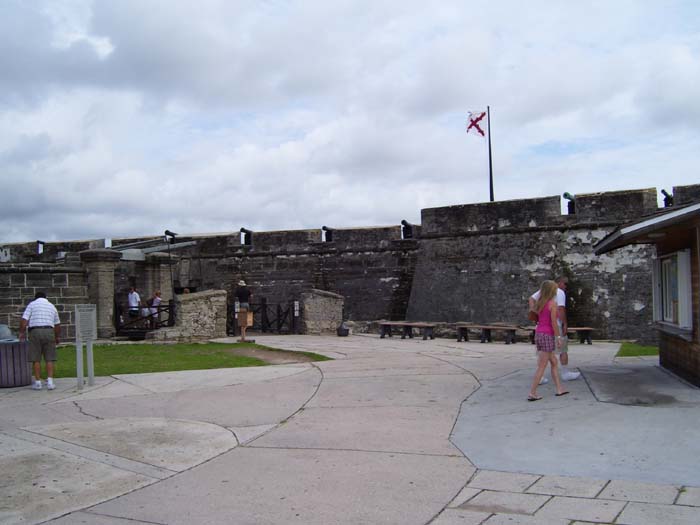 From a bit further away, so you can see the whole thing: 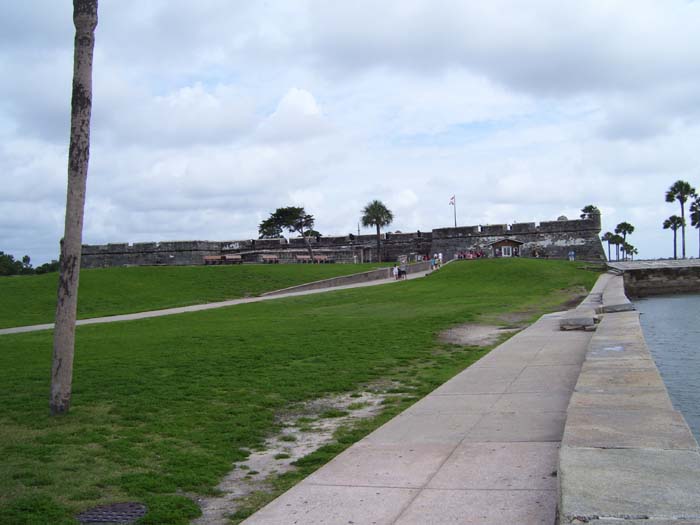 From a side angle so you can see the arrangement of the walls. You probably can't tell from here, but standing in that doorway they had a guy dressed in a guard's costume, complete with a musket replica, which was pretty cool. 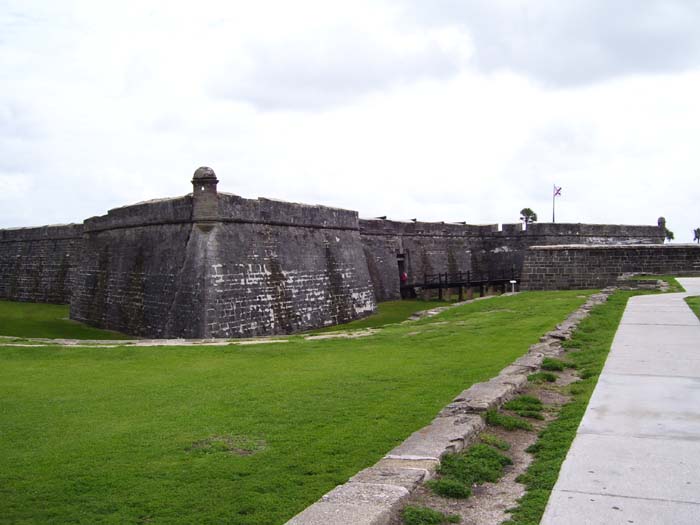 Moving right along, I went through St Augustine (which has a bunch of different historic trolley tours you can take if you want to see the entire old city, just in case you're ever visiting) and on the other side came to this sign pointing me towards Fort Mose Historic Park. I'd only gone a few miles so I didn't need a break yet, but decided to go anyway because I felt guilty about skipping out on most of this other cool stuff in town. Well, it turns out there's no fort left, all the remains having decayed ("it sank into the swamp"...haha) which is why the place doesn't get too many visitors, but the site's still pretty cool. It turns out that when Spain still controlled Florida, they announced that any escaped slaves that reached St Augustine would be freed so long as they converted to Christianity. (Now there's an underground railroad I bet none of you ever heard of.) Those who succeeded were sent to Fort Mose and became part of the defense of St Augustine and helped keep Spain in control of Florida until it got handed over to the British after some war or other (I forget). When that happened, the former slaves in Fort Mose fled to Cuba to avoid being recaptured and punished (or executed). After that, Mose just sort of fell into disrepair and eventually disappeared.

Anyway, I went out to the end of this causeway into the swamp and got to look out over at the spot where the fort used to stand. Not a very good place to build something, but then, the land was different in those days. Now the whole place is a protected wildlife preserve. Looking around, I spotted this bird (not nearly as close as that hawk, but still not too far away), the first blue heron I've seen. One of the signs on the walkway said it's a "tri-colored heron," one of several types you might see around here. 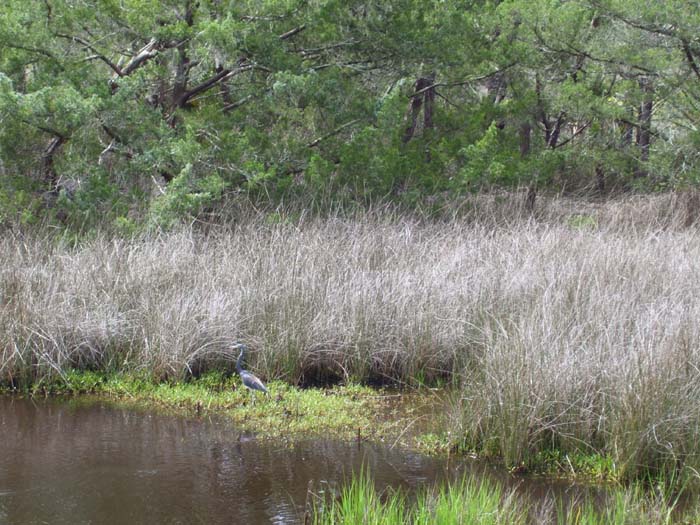 Also visible from the end of the walkway, this island of trees is speckled with white...well, those are "American egrets," which nest in these trees on a regular basis...often enough that the placard told me exactly where to look to spot them. I've seen egrets lots of times on this trip (they're everywhere down here) but always in the water or on the ground or a fencepost or something...this is the first time I've seen any up in a tree. 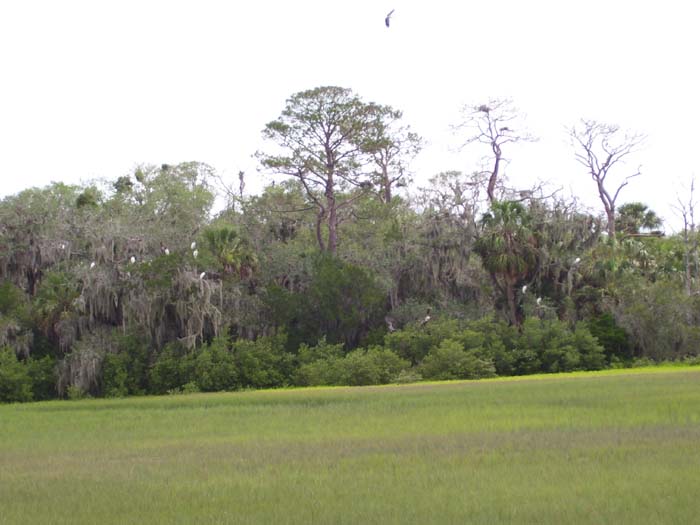 With that (and a quick visit to the water fountain to refill my big bottle) I said goodbye to St Augustine and headed out. I got to look at terrain like this for the next couple of hours as I headed for Jacksonville. The trees on the right helped out a lot by blocking the wind quite noticeably, so the day wasn't nearly as hellish as yesterday. In fact, I felt pretty good most of the time. 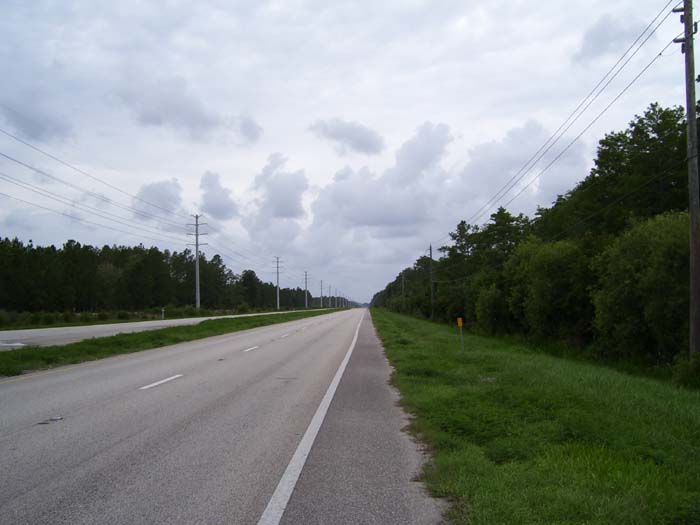 These next few pictures are of Jacksonville, which isn't on the coast like pretty much everything in Florida I've been to so far, but in a harbor. I'd left the coast by this point and won't see it again for a while...after this point there's too many swamps and rivers and such to make much headway staying by the water. Upon reaching Jacksonville, I had to go over a bridge, which fortutnately had a nicely protected pedestrian path, and took these photos. In this one, in the distance you can see the stadium where the Jaguars play football. 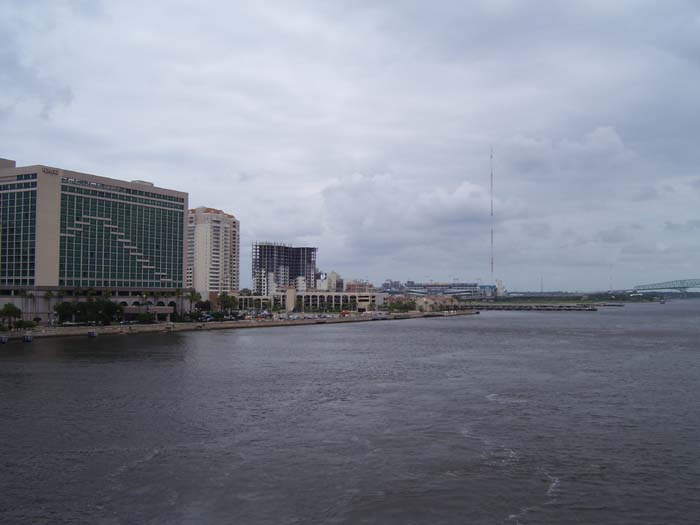 This shows some of the downtown area as well as the bridge I'm on. There's a little observation deck sticking out away from the guardrail, which is how I could get this shot. 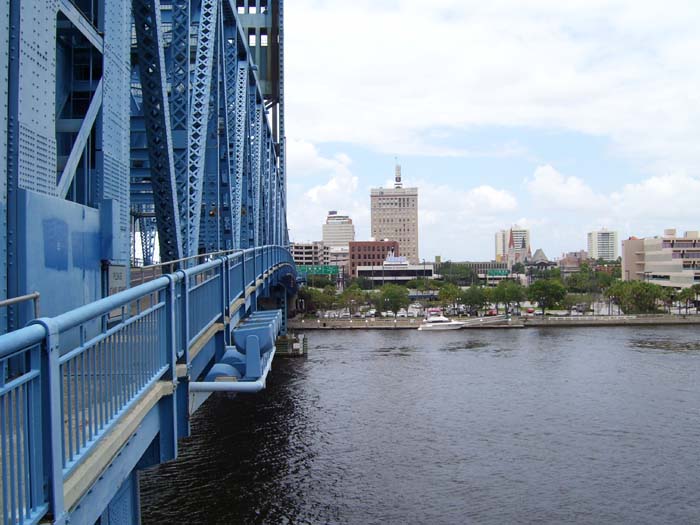 And that's the bridge I was just on, with a couple more bridges visible on the other side (but I don't know if it was safe for pedestrians to use those). In addition to the nice park here, you can actually tie up a boat along the edge of the river all along this section...I saw a couple doing just that. 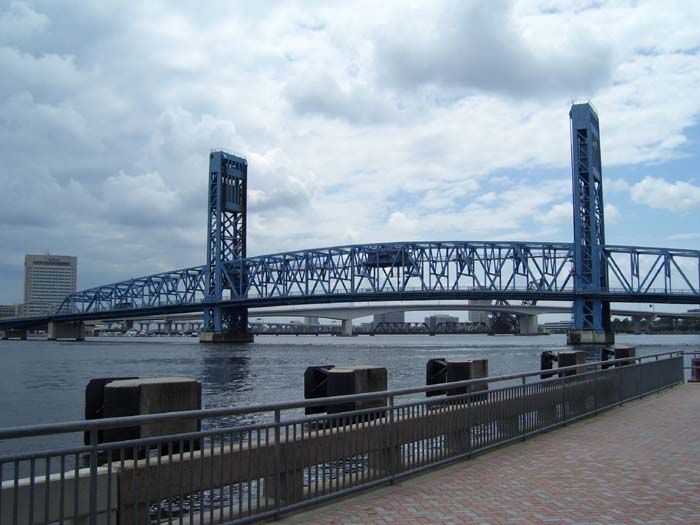 Pressing on, I continued on through downtown Jacksonville (which is very nice, by the way) and reached this spot, where I finally had to say goodbye to my nearly constant traveling partner, US-1. That road turned west at this point, but I needed to continue north, so I managed to ride almost (but not quite) the entire length of Route 1 through Florida. I'll now be on US-17 for a while. 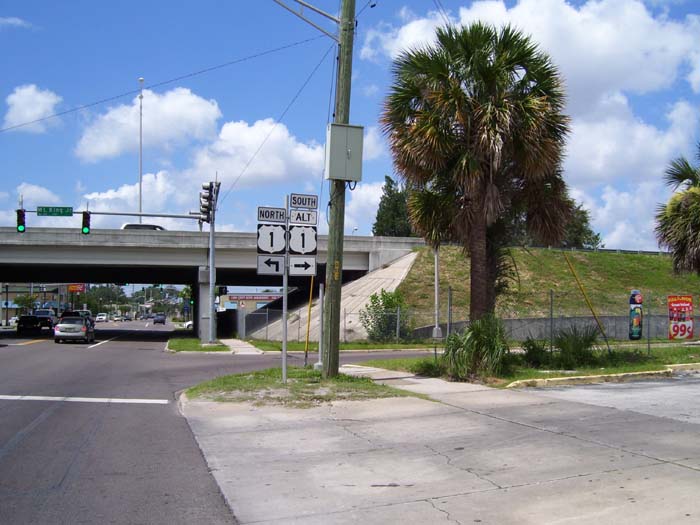 No more coast, but that doesn't mean there aren't any more bridges. This one gave me a nice view and a cooling blast of wind to the face. Interestingly, that little building to the right there had divers jumping off it attached to various lines and tethers...a diver training facility, perhaps? 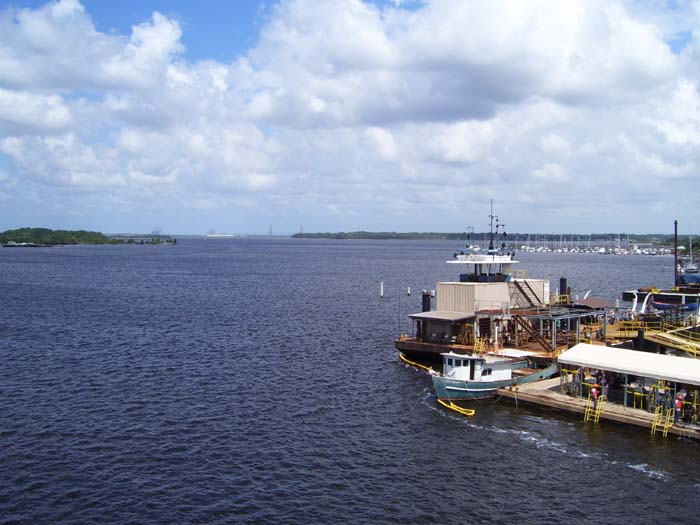 And then it's back on the road for a couple more hours, but now there were even more trees, so the wind got blunted most of the time. 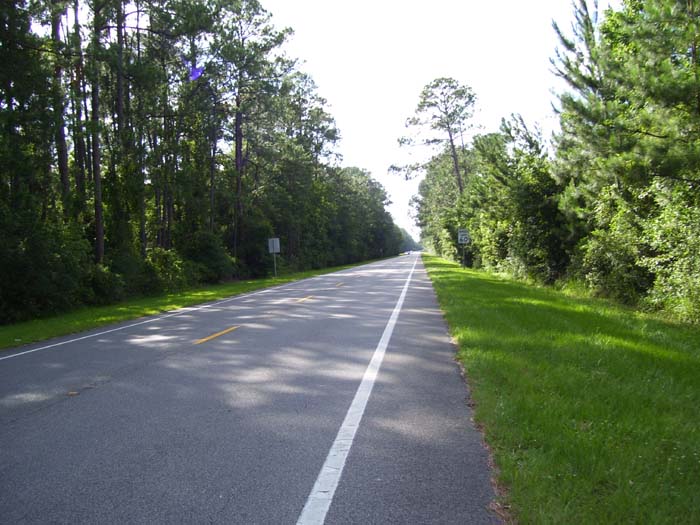 I could've probably gone on further, but when I got to the point where US-17 crossed I-95, I found a single lonely hotel with pretty decent rates, so I stopped so as to give my behind a break. About 3 miles further, I would've had to turn right and go a few miles back to I-95 (which goes northeast from here while I go north) to get to the rest of the area's hotels. Stopping here meant I could skip those extra miles into those tough headwinds. The only possible stumblilng block was getting dinner, because there's absolutely noplace to eat around here...but there was a single pizza place (Five Star Pizza) that delivers to this hotel, so it worked out. Interestingly, Five Star is located in Kingsland, GA, which means that while I'm staying in Florida tonight, my pizza actually came from Georgia.