Today's one of those days that would've been awesome, except the winds decided to ruin it. The weather was awesome, I felt great, and everything seemed fine except that every time I started to actually cruise along, the wind would slash through the trees and start hammering me in the face. Worse, every now and then I'd have to go out into the open, and that's when the nightmare really began. At one point I had to go past a small airport, and it felt like trying to pedal into a wall. I'd average 8-9mph during those times. Once, I had to climb one of those bridges that seem to be everywhere, and as I descended the other side I tried coasting, and didn't pick up any speed at all while going downhill...that's how bad the wind was today.

At least at the start of the day, it didn't seem too bad. I headed north-northwest, with the wind coming out of the northeast, and a heavy line of trees to my right, so I didn't have much trouble. In fact, I even went 18 straight miles without a break (the new record for this tour) before the road finally cut eastward and the soul-crushing gusts returned. Another 18 more miles later, at my second break (this shows how good I was feeling today, or I never would've made it that far in these conditions), while enjoying a much-needed 32-ounce Powerade, I found my legs already starting to hurt, so I formally gave up on trying to go farther than my original hotel target. The only other possibility would've been at least 15 miles further, and while I had the light to try it, I didn't see any reason to continue battling these winds today. There's always a chance the situation will change tomorrow...and according to the weather report, that just might happen.

Anyway, there's not as many pictures today, but not because of the weather...it's because I didn't really see a lot of interesting stuff. I'm inland now, passing through a lot of trees and swamp, which are pretty damn boring, actually. Before all of that, though, I had to first get into Georgia... 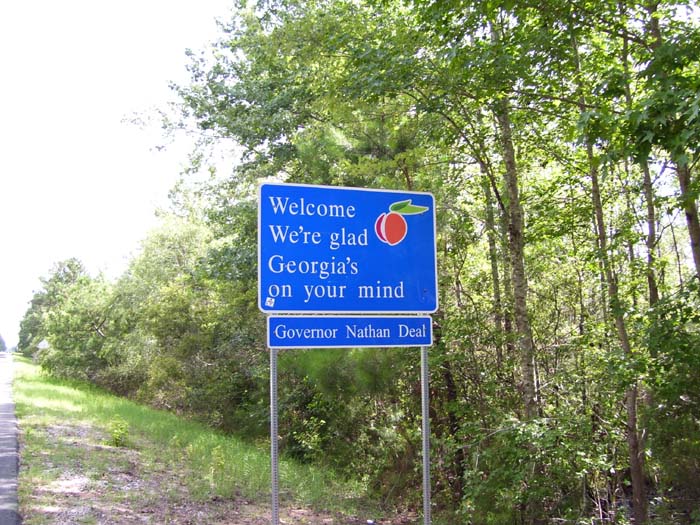 And this is what I got to look at most of the rest of the day, with a few exceptions when I left the trees and wished I hadn't. By the way, see that little sign there? It says I'm on North Bicycle Route 95, which I guess is some kind of state bike route that follows the highway. So far, it's pretty much followed US-17 and I'm still on it now, so we'll see how long this keeps up. 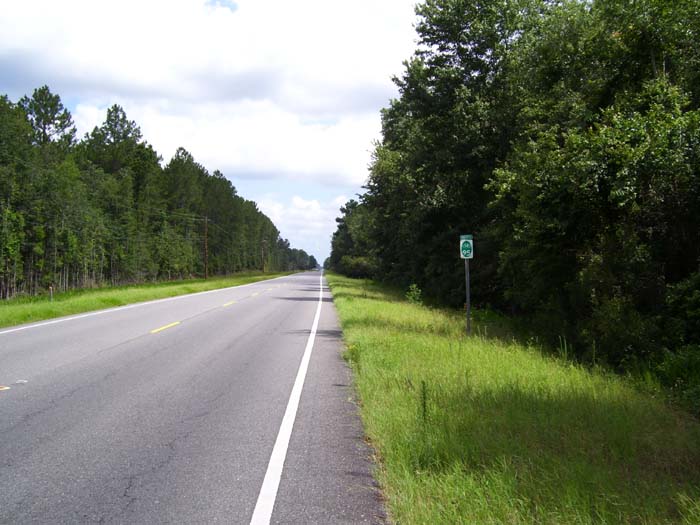 Here's something I saw a lot of today...dead, decaying businesses, sometimes out in the middle of nowhere. This particular one, the sign just barely advertising the "Georgia Girl Drive-In," looks like it might've been partially renovated at one time but then the owners gave up and now it's a crumbling ruin. Probably one of those places that didn't survive the arrival of the interstate. Notice how the parking lot is giving way to grass...in a few more years you won't even be able to see it, I bet. 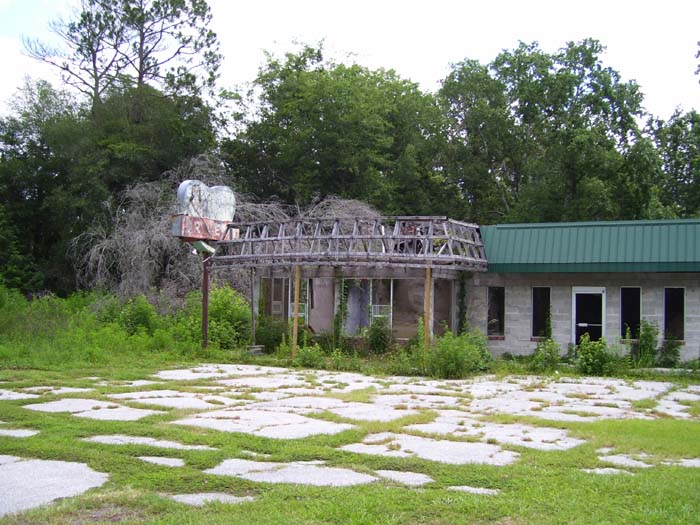 Here's a particularly wide river I had to cross, which proved exceptionally difficult thanks to the wind. This is the same bridge I was talking about earlier. 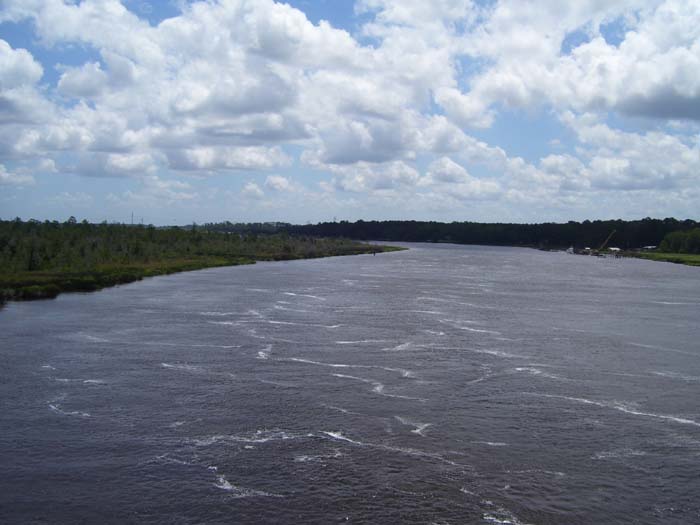 A bit later I reached a spot where I could either go left or right...both eventually looped around to the same point where I could then proceed on to Darien, and both routes looked about the same distance. I wound up picking the right turn because I saw this display in the distance, which turned out to be a local Air National Guard post. Of course, I found an airport right after that and had to deal with those insane winds again, but that turned out to be the last real trouble I had all day.

Speaking of the GPS, I haven't really talked much about that, but for something I almost didn't bother buying because I figured I wouldn't need it, the little device sure has come in handy. I always know exactly where I am, and even if I don't set up a route to a specific destination, at least I can check the maps on the fly, and zoom in and out at will. Plus it even shows topography (not a big issue so far) and vegetation, so for example, I could tell whenever I'd come to a forested area and get out of the wind. That's the kind of thing that's not really required, but sure helps my morale, since I know what's just around the next corner. I can't imagine how I ever did a bike tour without a GPS. If you don't have one, get one! 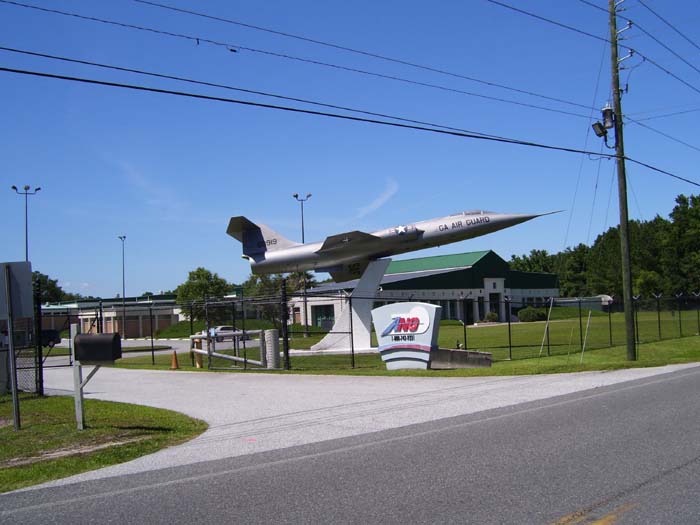 Anyway, riding along a bit further, I came to the entrance to a historic site, the Hofwyl-Broadfield Plantation, and the road going in looked just like you might expect in this part of the country... 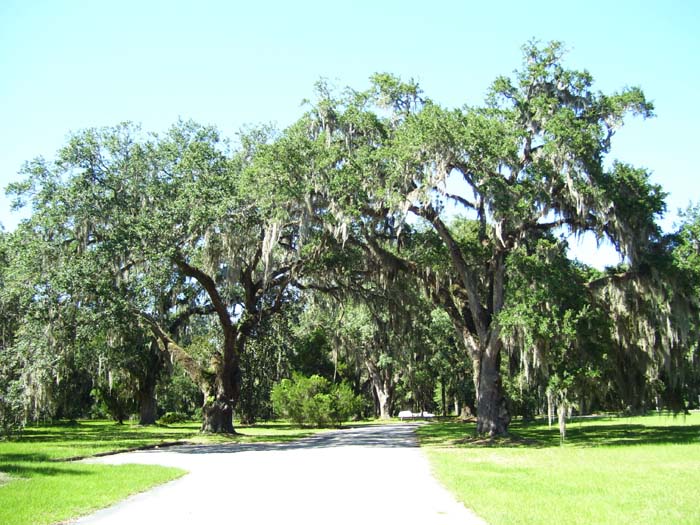 Here's a placard explaining what the place is all about (although I didn't pay the money to tour the grounds, because I would've had to leave my bike unattended, so I never actually saw the buildings). The bottom line: It's the last rice plantation in Georgia. Click on the pic below for a high-res version you can actually read. 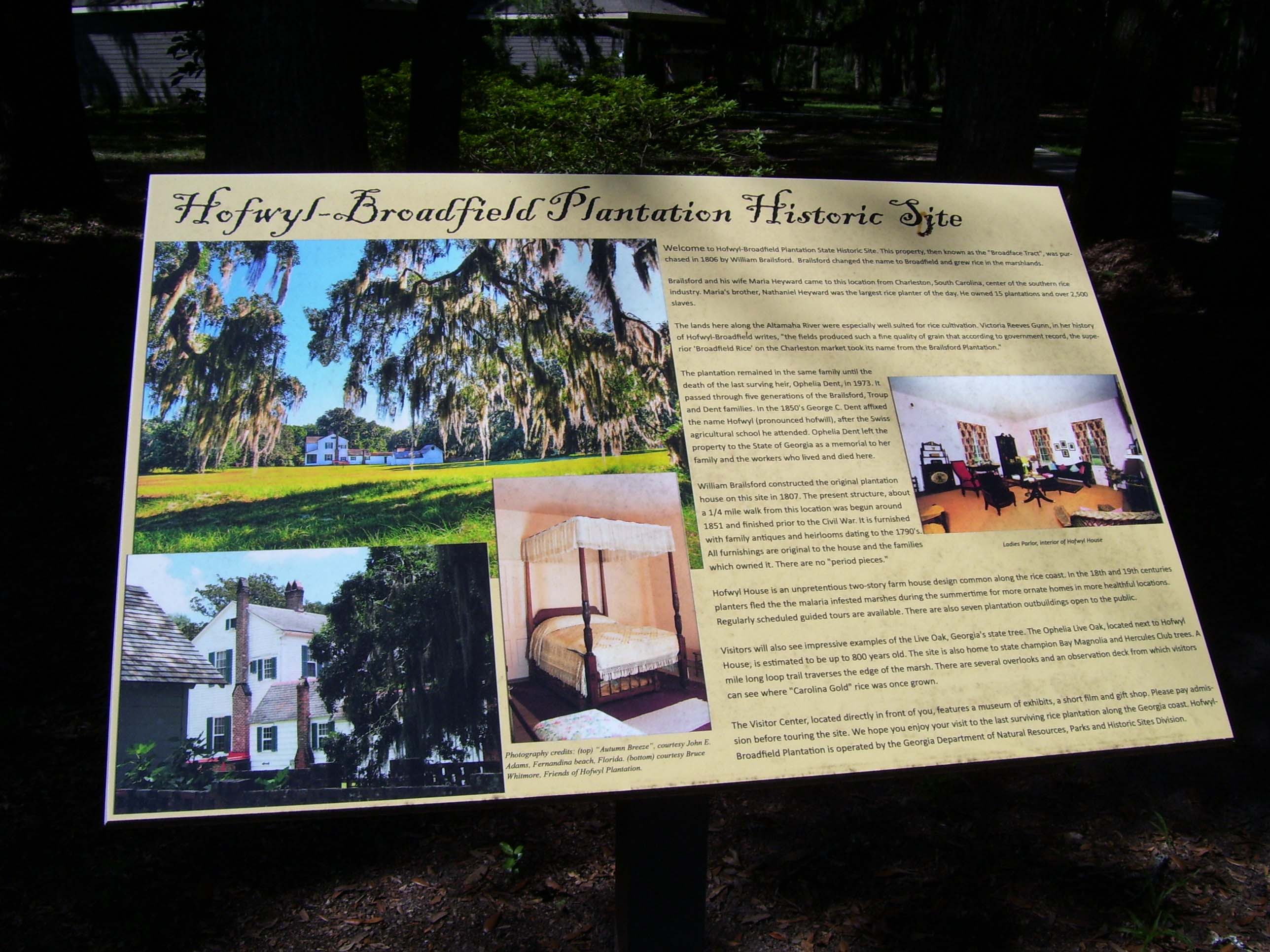 One last bridge to cross, and this one had a marina attached, the first of those I've seen in this area. Most of the rivers and creeks were basically deserted, even though it's the weekend. This one looked quite busy. 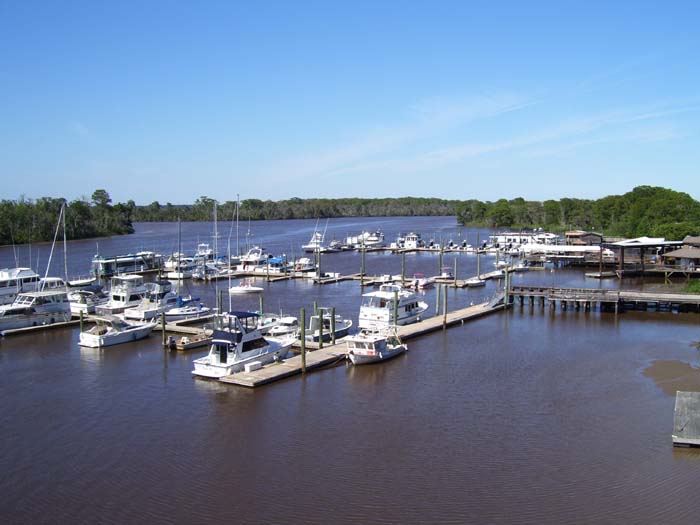 Arriving in Darien, I found signs leading me to another historic site, Fort King George, which was estabilished in 1721 and was the first fort built in Georgia (predating the town itself by many years). Again, you had to pay a fee to visit the place, and by this time the museum had closed, so all I got was this picture showing the small replica building barely visible behind those trees. 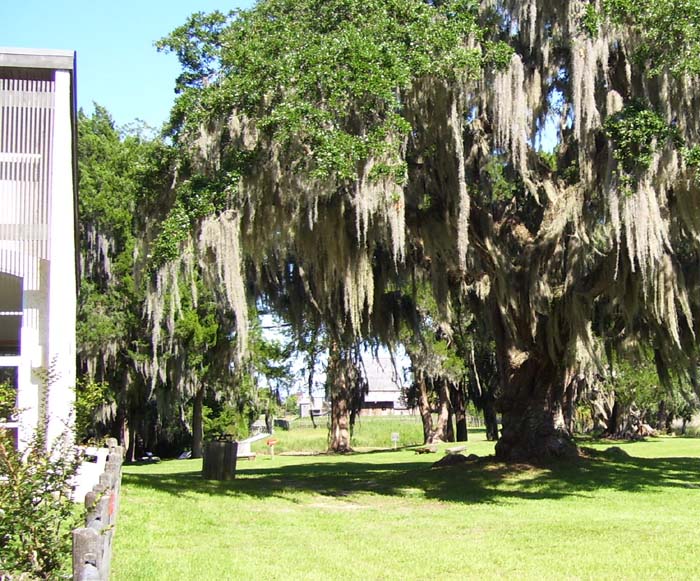 A few miles later I came to a tiny hotel on the edge of town, fortunately with a pizza place next door and grocery store not much farther. I've made it a habit to buy a pizza (or pasta) every night, along with a 2-liter of soda that hopefully doesn't have any caffeine. Usually I go for creme soda or lemon-lime stuff or maybe root beer, but tonight I saw something different...peach soda. Well, I'm in Georgia, right? So I tried some, and it's pretty good. 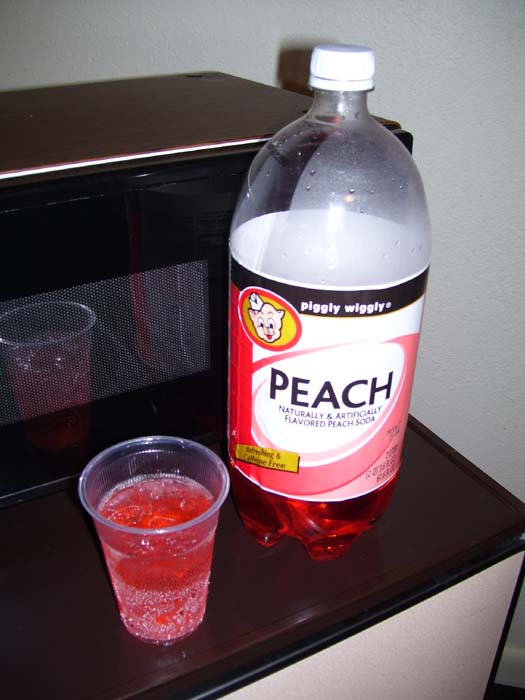 And that's it for today. Tomorrow I head for Savannah, and I'll have to stay to the west because my mapper won't route me over any of the downtown bridges, meaning they must not have pedestrian access. If I can make it 75 miles or more, I'll actually leave Georgia after only one night here, but we'll see how the winds are tomorrow before I decide about that.