The first 20 miles or so started out tough, as the wind continued what it did yesterday, namely, relentlessly slamming me in the face and trying to keep me from making any progress. I didn't even bother trying to go any kind of distance at all without stopping, but took a break at 10 miles and another at 20. I'd picked three possible stopping locations for today when looking at the map, and about this point I thought for sure it'd be the first one. The third, at about 95 miles away, was right out the window already.

However, at this point a funny thing happened...the wind shifted a bit to the northeast, and slowed down noticeably, until it barely seemed to be any trouble at all. I picked up the pace and started actually enjoying myself for the first time since these winds started. I kept expecting to ride out of the treeline someplace and get blasted, but it never happened. Even when the road turned east, directly into the face of it, I didn't even really have that much trouble. So I started thinking about that second choice of destinations, the one about 76 miles away (plus a few I added on little side trips and such here and there...it wound up being 80). Since I left this morning before 10am, I had plenty of time, and felt all right, so I didn't stop at 50 miles but pressed on towards Hardeeville.

By the time I got there, though, my rear hurt pretty badly and I'd started getting tightness and spikes of pain between my shoulder blades, both of which basically mean it's time to stop. I actually quit just before 6pm, which means I could've theoretically gone on and finished somewhere in the 90-95 mile range, but my body just said no. Best to not push it, I suppose.

Here's some of the things I saw today. The first is just another example of one of those dead buildings along the side of the road. I've probably seen 20+ of these so far, but this is the most overgrown example yet. 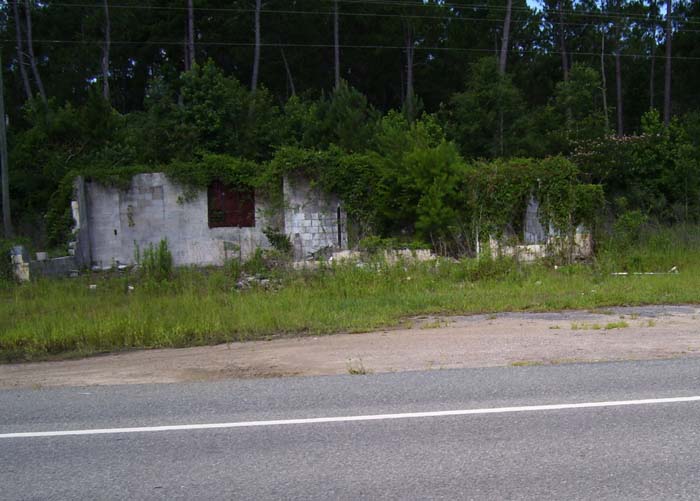 Now this is what you expect to ride through when you're bicycling in Georgia. 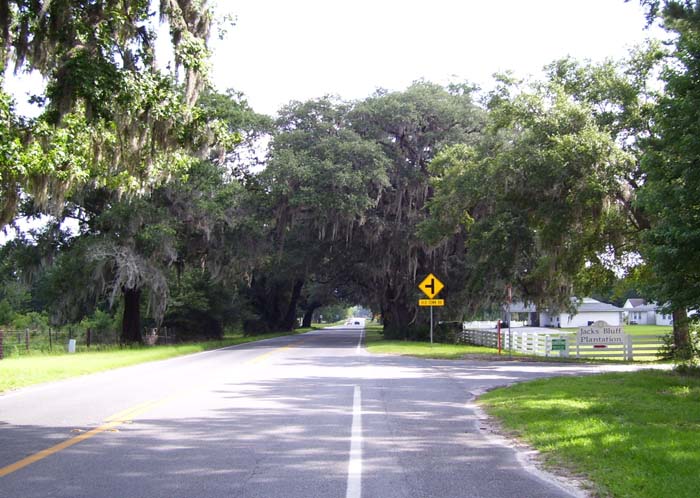 A bit later, I came to this, which the sign advertised as the "Smallest Church in America." Non-denominational, supposedly, but the sign said the place was "owned by Jesus Christ," so that sort of limits things a bit, don't you think? 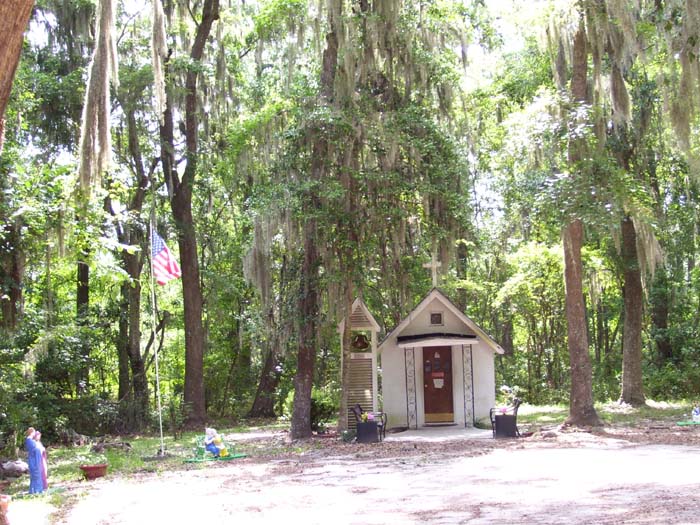 At my second break, while having a cold drink at McDonalds, I noticed this gas station across the street. Truth in advertising, perhaps? 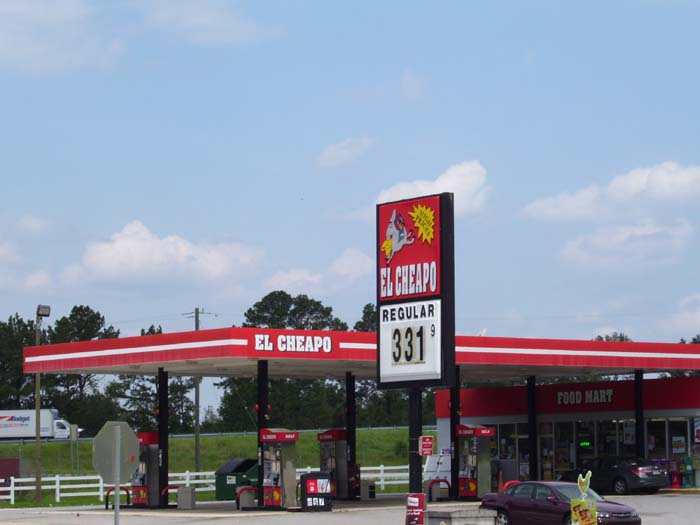 In the town of Midway, I came across this museum, which I know almost nothing else about, because it was closed (it's Sunday, don't forget) and the gate was locked. There was a placard outside saying something about two of Georgia's signers of the Declaration of Independence hailing from around here, so I suppose it has something to do with that, but that's all I know. 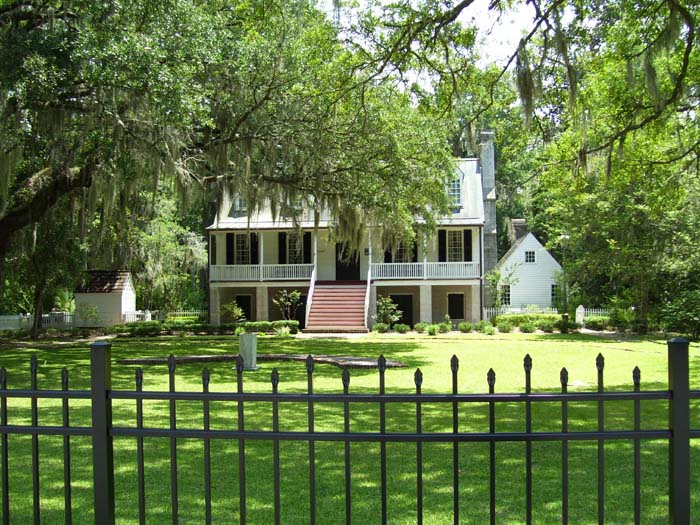 A little while later, US-17 turned into an almost-highway, with a center divider and everything. You probably can't tell, but they had rumble strips occupying the left half of the shoulder, so I had to hang to the right (this didn't stop me from taking photos while riding, though, so it's not that bad). A bit later on, in the next county, I got my own bike lane, but that didn't last too long. 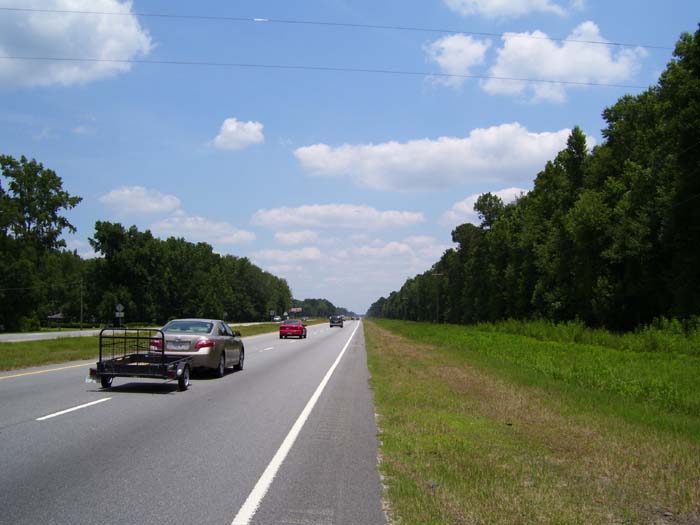 What do you do around here for Father's Day? Take Dad out boating on the river, that's what. 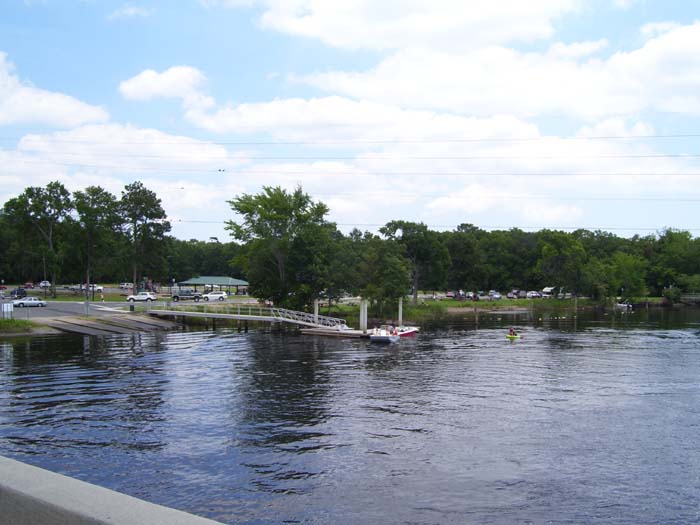 Quite a few times while riding I passed over creeks that ran deeper into swampy ground. It's not as scenic as the mountain vistas and cliffs from the West Coast tour, but still, it's a natural wetland, so what do you expect? 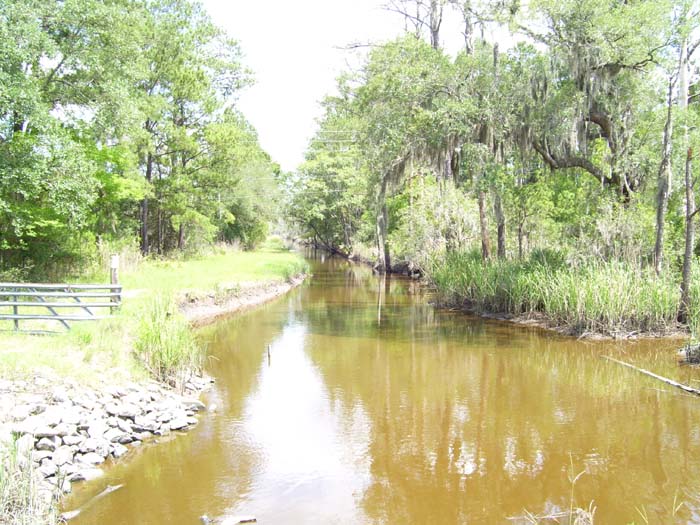 After about 55 miles of riding I came into this area, which basically meant I'm really out in the boonies now. 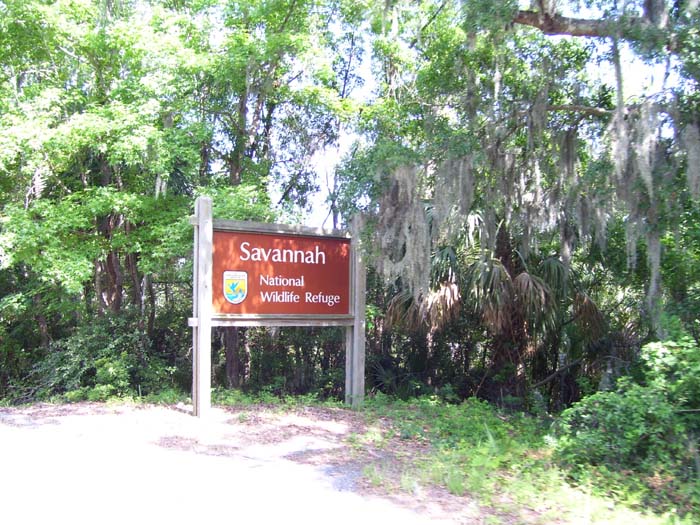 Looking out over the open ground, you can see Savannah in the distance (it's slightly left of center and hard to see, but it's there). This is about as close as I got to the city, because none of the bridges in town had pedestrian access (according to my mapper, anyway), so the only way to get over the river here was to pass well northwest of town. That's where I took this picture, actually...passing over the river in question. 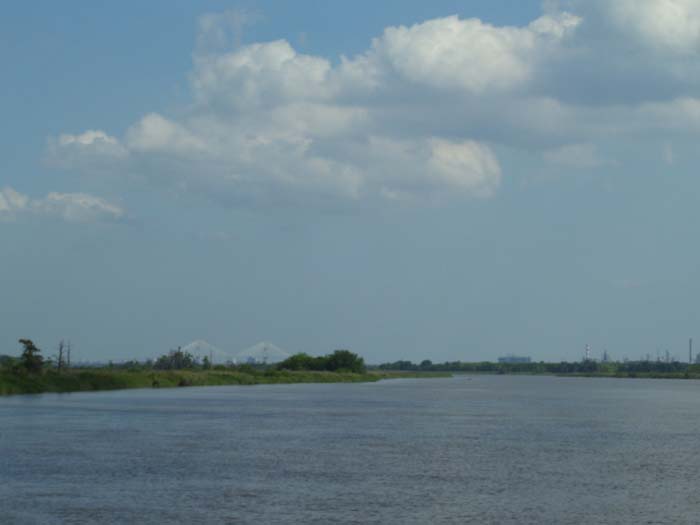 Immediately after doing that, I came to this sign...so there you have it, I only stayed in Georgia for one night (it did take almost two full day to completely cross, though). 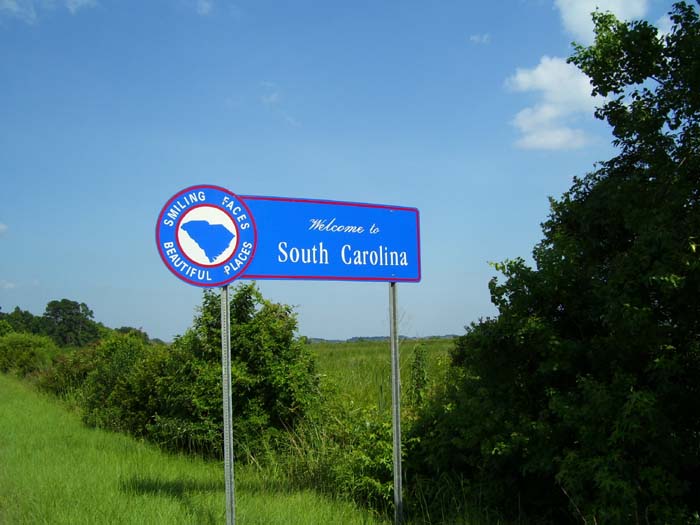 The wildlife refuge was all around me for at least 5 miles, with all kinds of birds flying around. I thought maybe I'd like to see an alligator, though, and while I kept looking for them, I didn't see any from the main road. I came across a road that wound through the refuge for about 4 miles, and almost took it, but when I saw it turned into dirt and gravel, I decided not to. Back on the street, there were lots of views like this, but no gators. 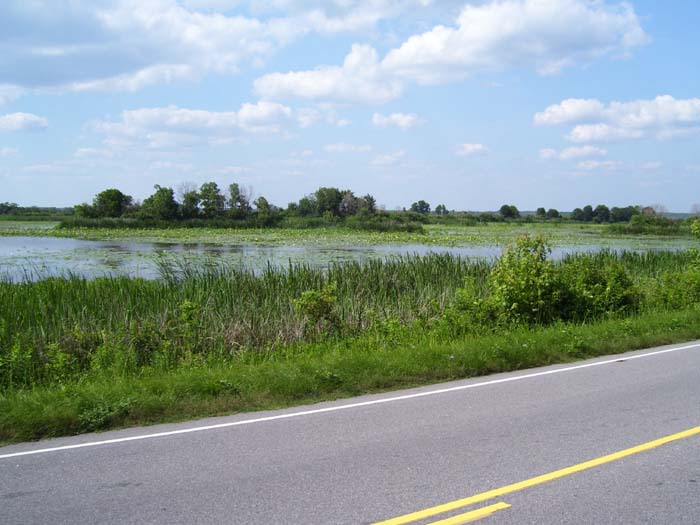 Finally I found a little side road that led to a pond where you could go fishing, and noticed this sign here. Good to know the rules, I guess. 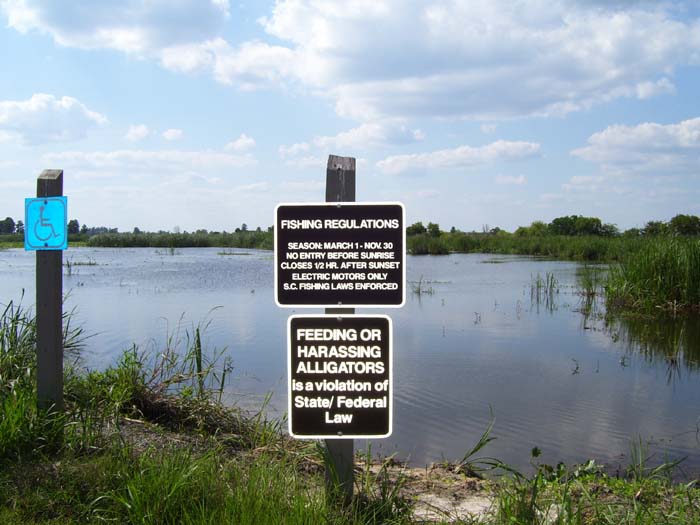 Shortly after that I noticed what looked like a log sitting out in the water, until it started moving. There you have it, my first alligator sighting of the tour! I did notice a couple more later on, but this was the first. 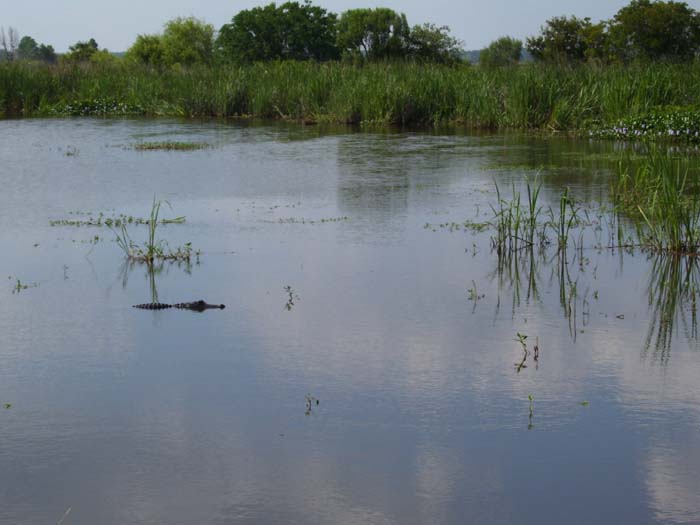 Shortly after this the road I was on left the refuge and joined back up with US-17 (I'd had to leave that earlier, because it went into downtown Savannah and turned into a restricted access highway). The road here had no shoulder and wasn't in very good shape, but it got me to my destination, an intersection of US-17 and I-95 that literally crawled with hotels. I guess this is a prime spot for cheap lodging, being so close to Hilton Head and all...I got my room for only $25.95, the cheapest hotel room I've had in recent memory. That's going to be tough to beat.