Today turned out to be quite the adventure. First of all, I knew from last evening's mapping that where to stop boiled down to two choices: a single small hotel at about the 55 mile point, or going all the way to the I-562/US-17 intersection in Charleston at about 87 miles. Considering yesterday's 80 miles left me pretty exhausted, and today's weather forecast was for hotter temperatures and an east wind (and I'm going east most of the day) I figured on the former. The problem, though, is that if I do that, the next day (where a big chunk of my ride passes through the Francis Marion National Forest, where there won't be any hotels) would be either 50 or 100 miles, with nothing in between. So basically if I wimped out today, I'd have an even shorter ride tomorrow. So my thought was to go for the 88-mile ride if at all possible.

So with that in mind I got started around 9:45, which would give me 10 full hours of daylight if I needed it. Things went well at first. The going proved easy, with the wind staying out of it for the most part. The only problem was the road conditions...have a look at this photo here. First of all, there's no shoulder at all, but at least here the interstate (I-95) was still close by, so this stretch of US-17 had little traffic. Also, notice the crack there on the right hand side of the road. That crack, along with plenty of little spurs sticking out here and there, went on for miles. This made things very bumpy, enough that at one point my right front pannier came loose and the strap managed to wrap itself around my wheel hub. Fortunately I stopped quickly enough to avoid any damage, but the strap was ruined. Oh well, there's few things that can't be fixed with the proper application of bungee cords. 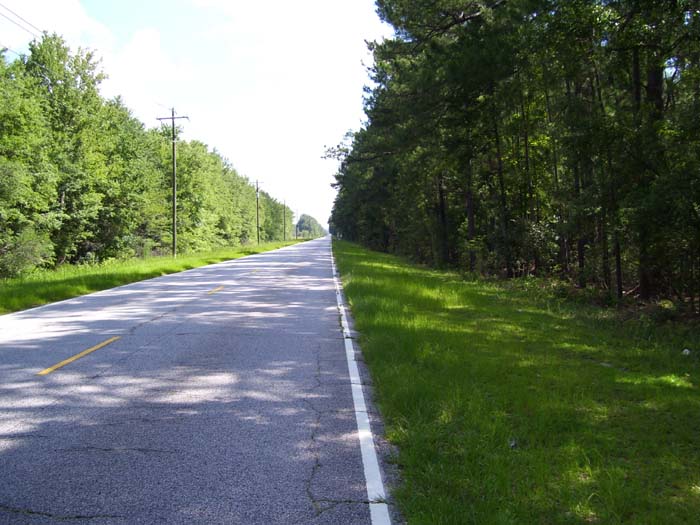 Anyone need any railroad ties, by the way? I know where you can get a whole bunch of them. 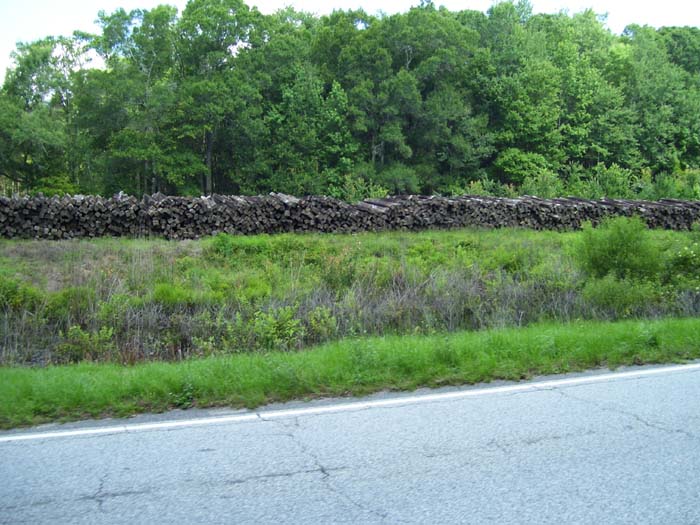 After a while, US-17 merged with I-95 and became a single (restricted access) highway, which you can see off to the left in this next photo The road I'm on is a frontage road that parallels the highway. Well, mostly, anyway. A few miles later, the frontage road basically ended at a dirt strip (with a sign saying "No Outlet") and a sharp right turn. So much for the map showing the frontage road paralelling the highway the whole time! If you'll look at the map from today (at the top of the page) you can see where this happened at the first pair of dots. Fortunately for me, I have my trusty GPS, so I never had to worry about getting lost or not figuring out how to get back on course. In fact, even though this added a few extra miles to my trip, I didn't really mind the side trip. 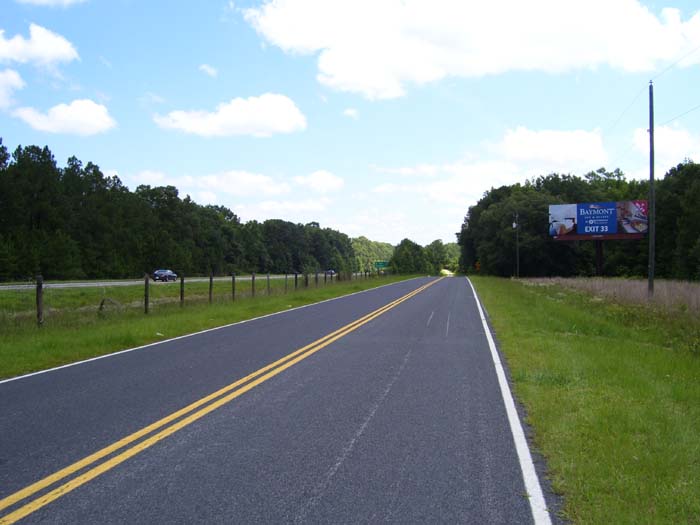 Eventually I linked back up with I-95 and rode alongside (the frontage road didn't disappear again) and it dumped me out here, at the overpass I'm on (the road I followed is over behind that offramp on the right). This was my last look at I-95, my constant traveling companion and excellent source of hotels for the last few days. At this point it continues north and I head east. 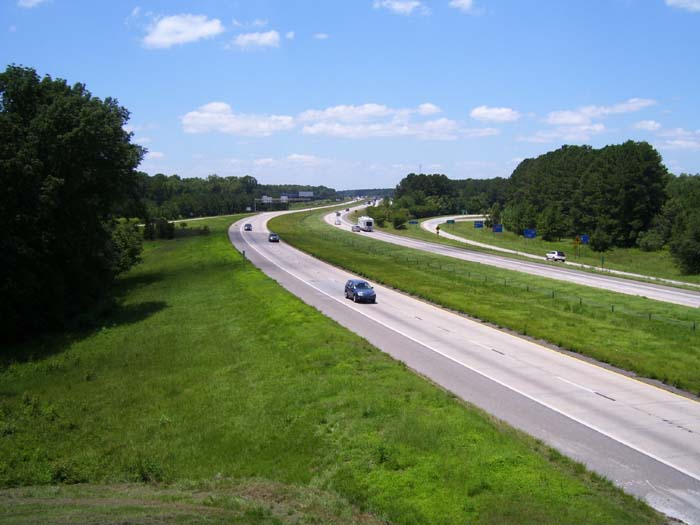 I got to look at lot of this today...lots of swamp, wetlands, marsh, that sort of thing. Not all that picturesque, but kind of serene, really...just this wide open, quiet-looking morass with nobody out there at all. 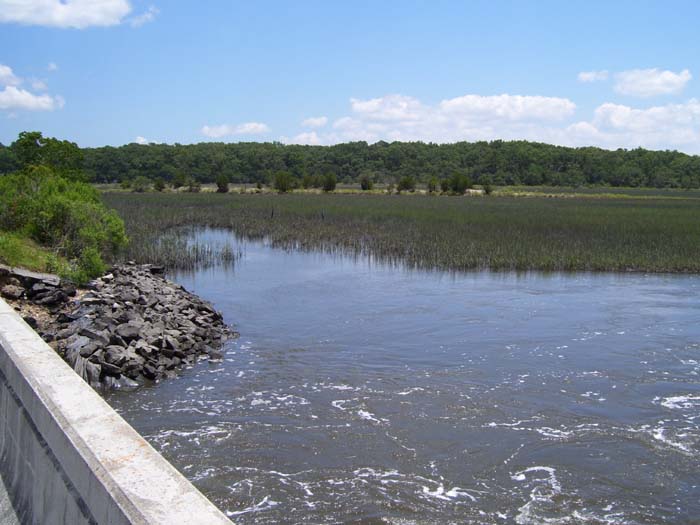 For a very brief time I actually got to ride on a bike path today. Only five miles or so, but still, it felt amazing. After spending the entire day with no shoulder (or if there was one, it had rumble strips in it so I had to tightrope-walk along) this felt like my own private lane. Too bad it didn't last. 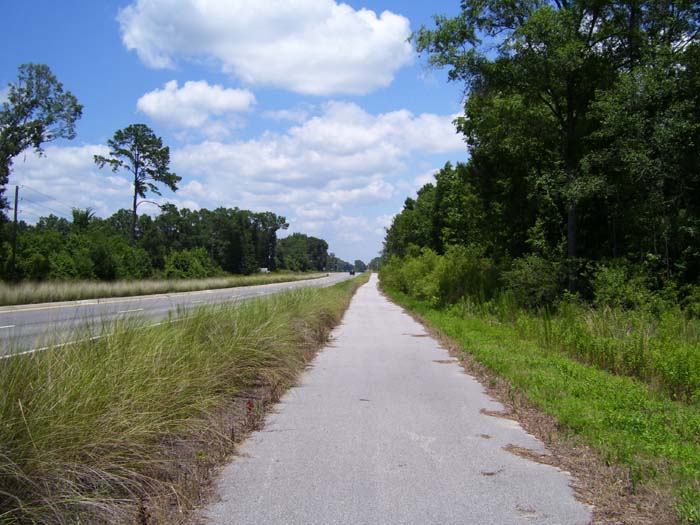 Here's another nice scenic view. Forest to the right, river in the middle and swamp on the left. Typical South Carolina terrain. 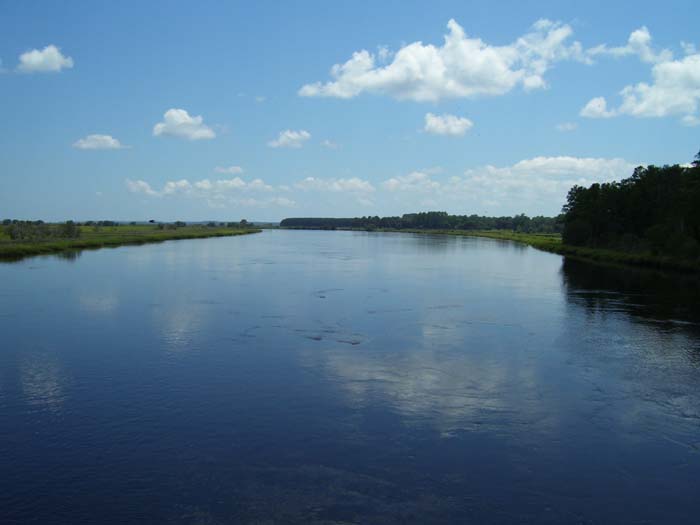 Here's an example of what I was talking about earlier. As soon as US-17 left I-95, it got much busier. For a while it stayed at 4 lanes, but for a stretch of about 15 miles, it dropped down to only 2. That's when things got tough. As you can see, I had to deal with trucks zipping by at 55+ mph on a constant basis, with only that tiny strip of shoulder there (and the white line has bumps on it, I guess so the drunks can tell when they're weaving off the road, or something). So I spent about an hour and a half doing a balancing act along here, praying some truck wouldn't buzz me close enough to take my head off with its rear-view mirror. Oh, and forget about taking a drink of water or anything like that, because doing that means I have to risk wobbling the bike a bit to grab the bottle...and that could put me into traffic, or right off the road altogether. If I needed a drink, I had to pull over, like I did here on a tiny side street. (No, I didn't try to snap a picture of a passing truck while riding on this narrow shoulder. I might've been able to do it, but then again, I might not.) 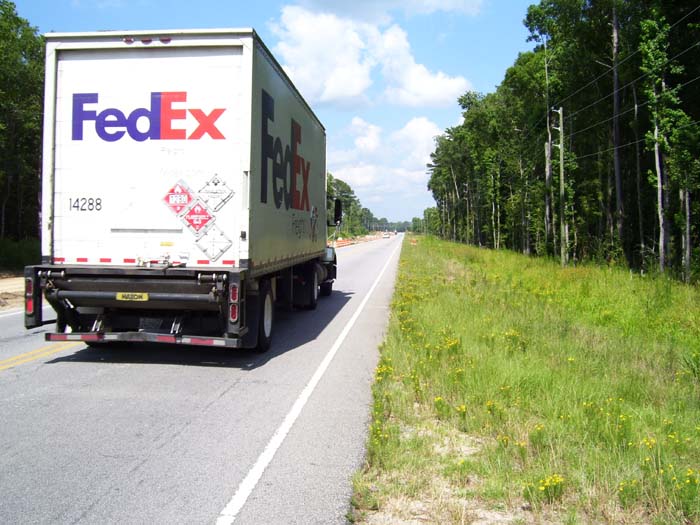 So when I spotted a little wildlife viewing area a bit later, I jumped at the chance to take a much-needed break there. Here's a glimpse of what the little walking path looked like through the trees. I didn't go very far, though, because the mosquitoes were pretty bad. Instead, I drank half a bottle of water and moved on, glad for the shade, because at this point the temp was up over 85. 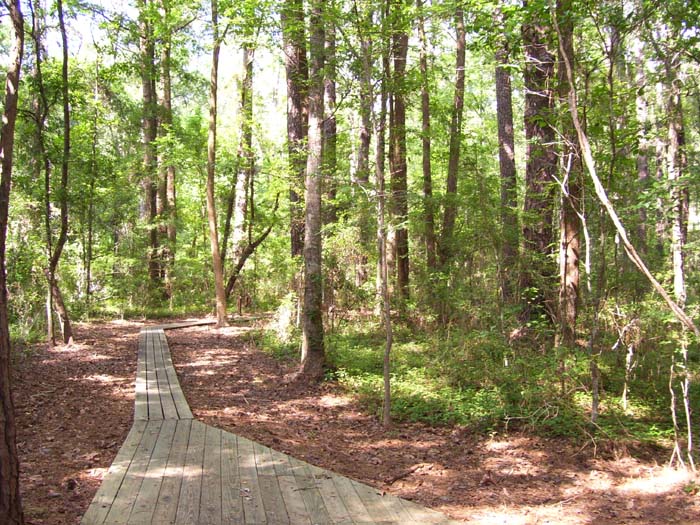 The two-lane road eventually expanded back to four lanes, but even that scant shoulder you saw earlier went away, so I had to ride along sticking out in the lane. Fortunately, most everyone gave me a wide berth. There was one incident where a guy started honking and I edged right onto the side, just barely not dropping off into the ditch, and some jerk raced by about a foot away from my left shoulder. And this was right after I passed a "Share the Road" sign telling motorists to give bicyclists a break. He couldn't even give me a couple of feet of clearance? What's that all about? Anyway, I was glad to finally get my shoulder back about 10 miles out of Charleston, and right around there I took this last picture of the day. That's one of those white egrets I mentioned earlier in the blog. I hadn't included a really good shot of one of them, primarily because they're so skittish they fly away any time I get close, so this is it. 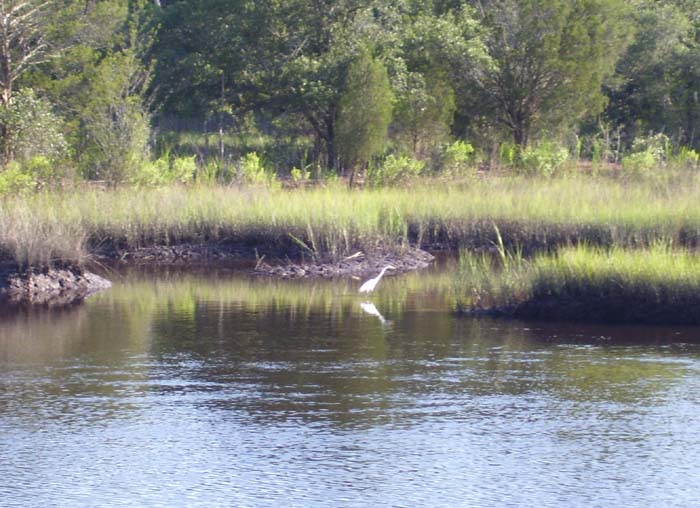 Upon reaching Charleston, I made my way to the nearest hotel, got some food, and fired up the laundry, because it's been way too long and things are starting to get really foul around here.