After yesterday's marathon ride, I wanted something a bit shorter, but unfortunately the hotels didn't cooperate. There just wasn't anything closer than Georgetown, about 70 miles away, because of that national forest I mentioned before. In fact, I expected to find absolutely no amenities at all in the 30 or so miles I'd be in that area, so I packed extra water and topped off beforehand.

Before that, though, I had to actually leave the hotel, which proved more difficult than usual. I'd noticed last night that my rear tire seemed a bit low (when that happens, you can tell because the wheel feels different when you run over bumps in the road). Of course, it's been quite a while since my last visit to a bike shop to top off the pressure, so that didn't seem unusual. Before going to bed, I used my hand pump to add 15 or 20 psi, getting it up to maybe 60 psi (when I prefer 80). I figured that would be fine...but when I got up this morning, the tire had lost a lot of that air already, a sure sign of a slow leak.

So I took the tire off and fixed the puncture, and that's when I discovered I didn't have a liner inside the rim. I consider tire liners essential on tours, because one flat can ruin your entire day (imagine if I'd had one yesterday, for example). So to not have one really annoyed me. When my bike shop rebuilt the rear wheel back home, they obviously didn't put a liner in even though I specificially asked if they had and was told a firm "yes." So whoever that was really didn't know and was just telling me what I wanted to hear. You'll recall these are the same people who screwed up my spokes, too, so when I get home they're going to have an unpleasant visit from me.

Anyway, after getting the tire fixed and grumbling about how I never would've had that flat at all if the liner would've been there, I packed up and left just before 11. A couple miles down the road I found a bike shop and bought some tire liners (which I'll put in after my next inevitable flat) and topped off my air. Then I headed into downtown Charleston, worked my way around to the pedestrian access ramp to the bridge, and that's when I got a real good look at what I had to climb: 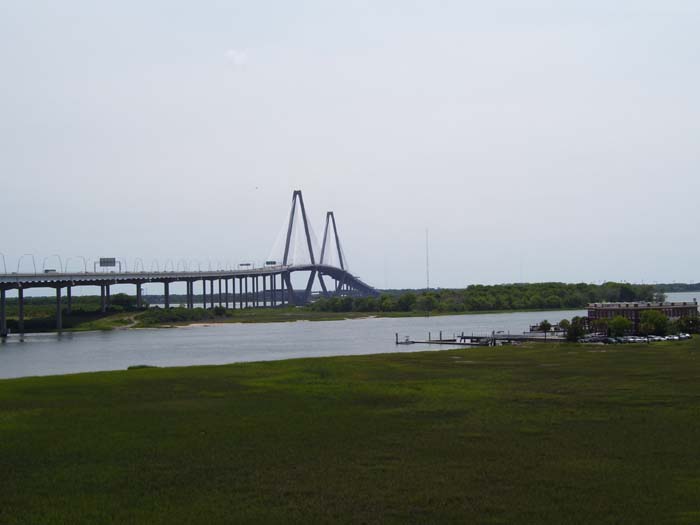 Doesn't look too bad, but that's almost 2 miles of climbing right there--by far the highest and longest hill of the tour so far. Back on the west coast trip, I would've done 4 or 5 of these by noon on the worst days, so I know it sounds weak to complain about just one climb, but then, I didn't do the west coast in 85 degree weather, either. There were some good views from up top, though... 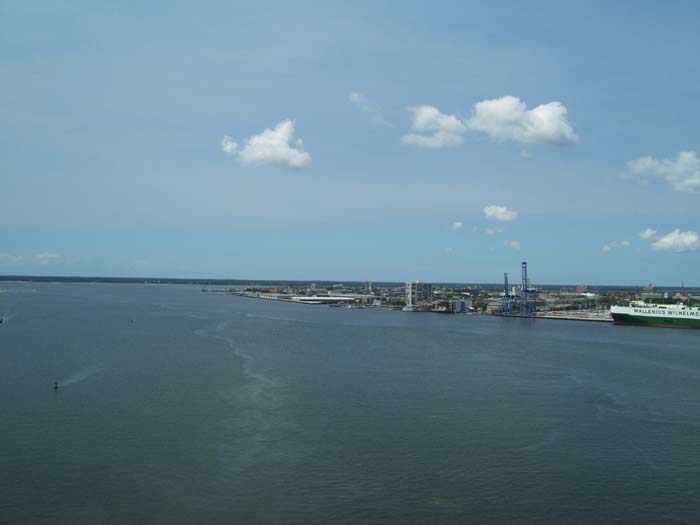 Over on the other side, they had this aircraft carrier parked along the shoreline, obviously a museum piece, and since I'm heading in that general direction anyway, I decided to check it out later. 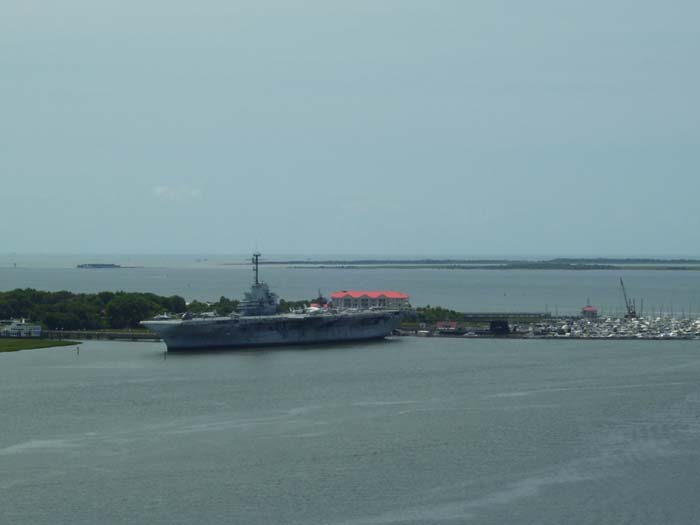 This view is looking back the way I came. Notice how the road sort of sweeps around to the left...that's just the pedestrian accessway. The road part goes staight through. If I'd tried to come up that way, I would've been in the wrong place. It pays to do your homework sometimes. 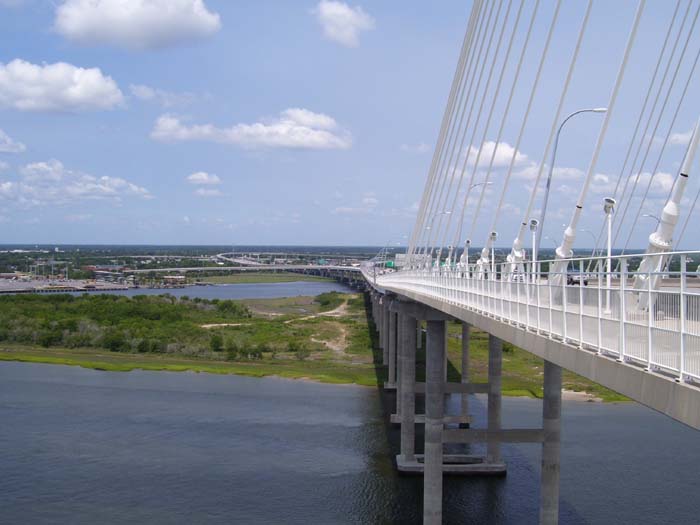 Oh, and speaking of the pedestrian walkway, look how wide it is. Bicyclists were to ride on the left, and walkers/runners on the right. It's so wide you could have a runner and two cyclists passing each other at the same time. 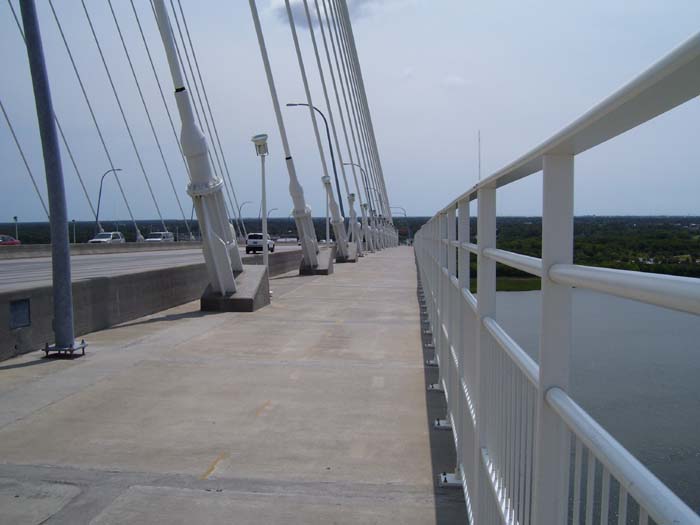 One last picture from up here and then I'll be on my way. 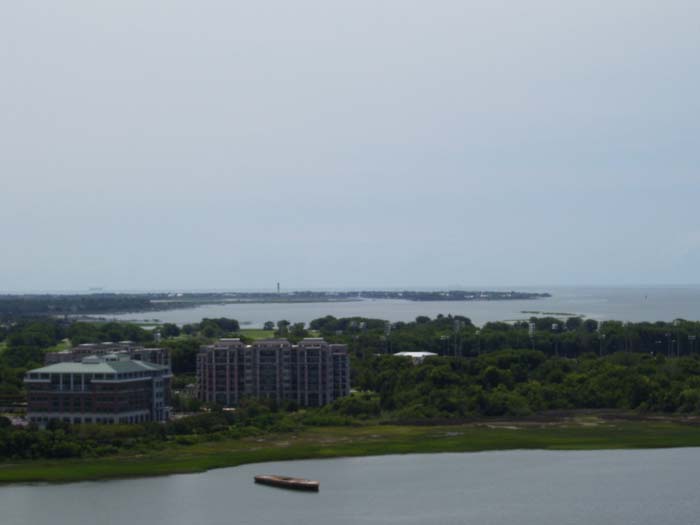 At the bottom of the descent, the ramp again headed off away from the main road, but that was okay because it's the direction I wanted to go. There's a place called Patriot Point with all sorts of military museums, displays, and memorials (mostly naval), like this one here. It's not a real sub, but a mock-up designed to look like it's cruising through the water (the landscaping gives the impression of the water frothing all around as the sub plows ahead). This is a memorial to all the people who served on submarines during the Cold War era, as it turns out. 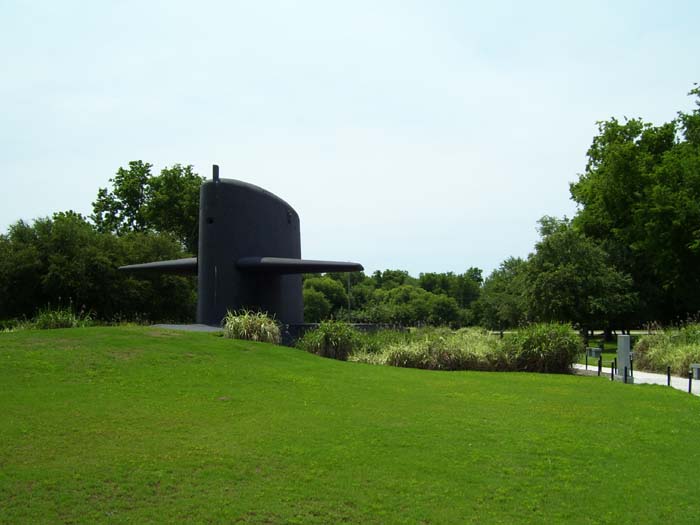 But why should I explain it when you can read it yourself from this display? Just click on the image below for a close-up of the text. 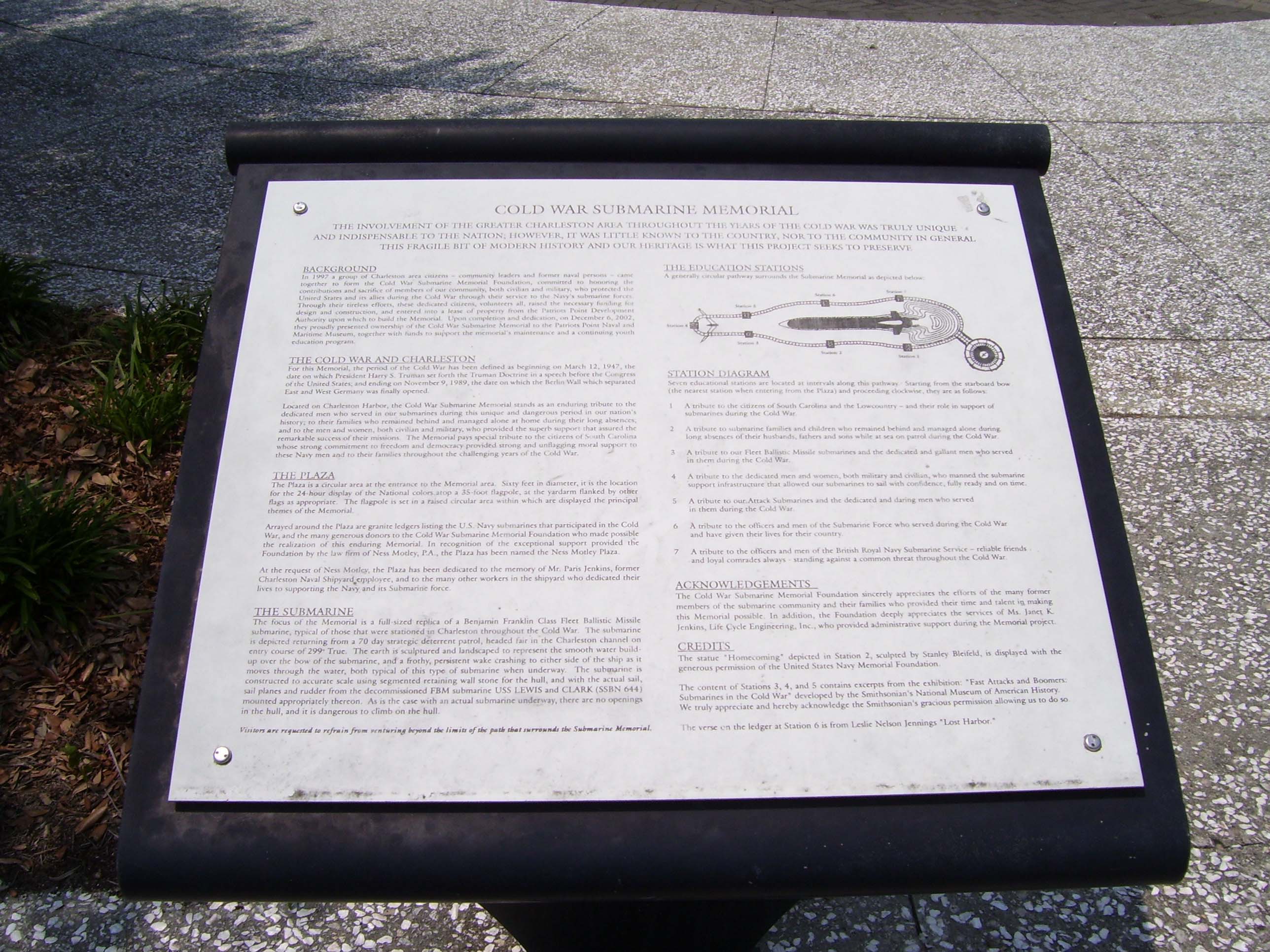 Over across the street, I came to the aircraft carrier, which turned out to be the USS Yorktown. There were tons of people over on the deck wandering around and taking photos. I asked if I could take my bike on board (how cool would it be to bike along the deck of an aircraft carrier?) but they said no, darn it. 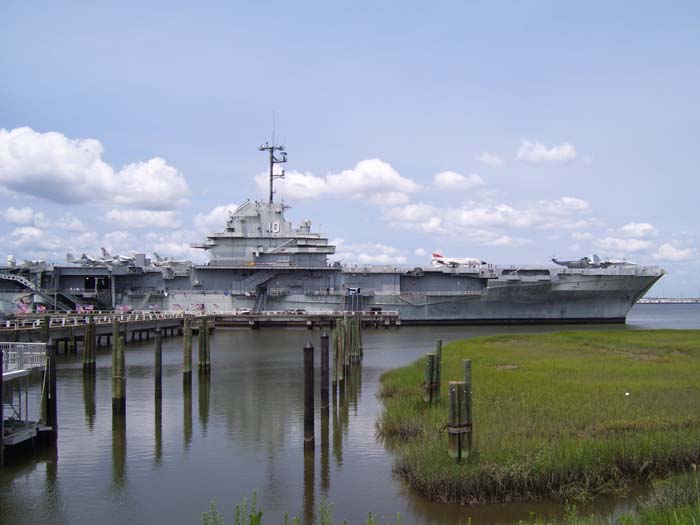 A bit further along I found this mock-up of a support base from the Vietnam era, complete with various different helicopters. Check out the very specific location on the sign. 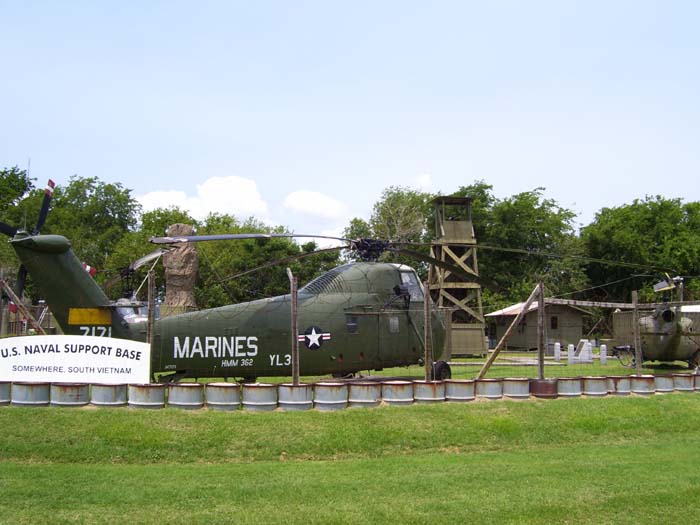 I got the impression there's a lot more to Patriot Point than I had time to look at, but at least I checked it out for about a half hour or so. I added a few miles to the trip counter for the day, but it seemed worth it to me. Besides, anything to delay my return to the awful highway I'm stuck riding on... 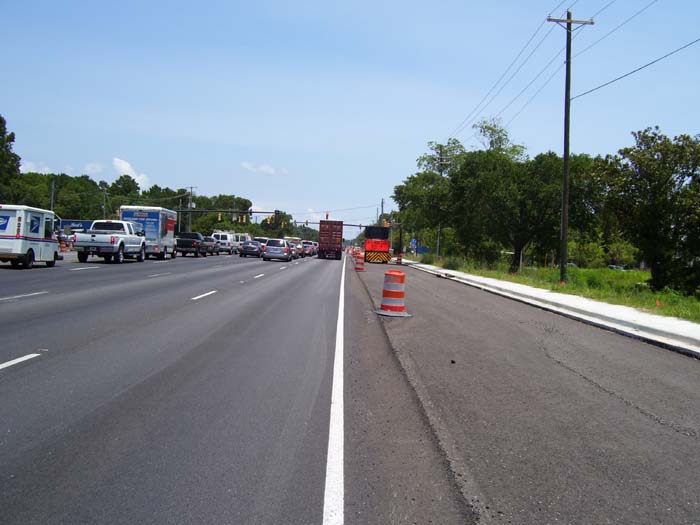 Nice, huh? Those stupid barrels kept me sticking out in the road all day, and no, I couldn't ride down in that fresh asphalt because they had it blocked off by vehicles or barrels pretty much all the time. This construction went on for at least 15 miles until I finally came to the national forest. 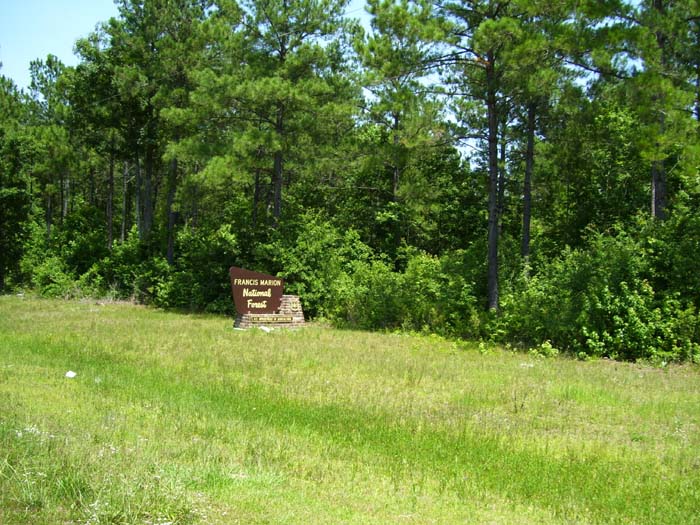 There was far less traffic now, but still, I would've liked a shoulder on the road...ah well, at least there weren't as many trucks going through here. Anyhow, a few miles after entering the forest I saw a sign for this visitor center, and pulled in so I could top off my water. 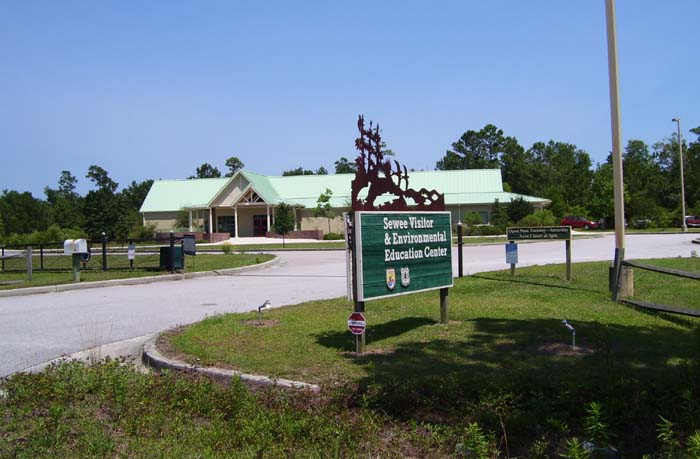 Well, it turns out they had all kinds of displays and cool information in this lovely air-conditioned building with its beautiful little water fountains. I spent a while checking these out, chatting with the rangers and eventually taking the mile-long nature trail, which looked something like this: 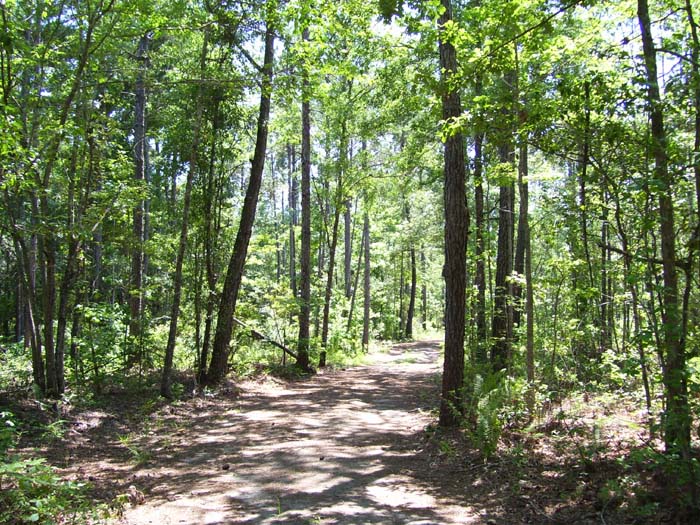 Wide enough for a bike and not too gravelly, so I didn't have any problems. At least, not with the bike, anyway. The main problem was the swarming mosquitoes, which decided to make a buffet out of me. Especially when I stopped to take a photo of this little secluded pond. 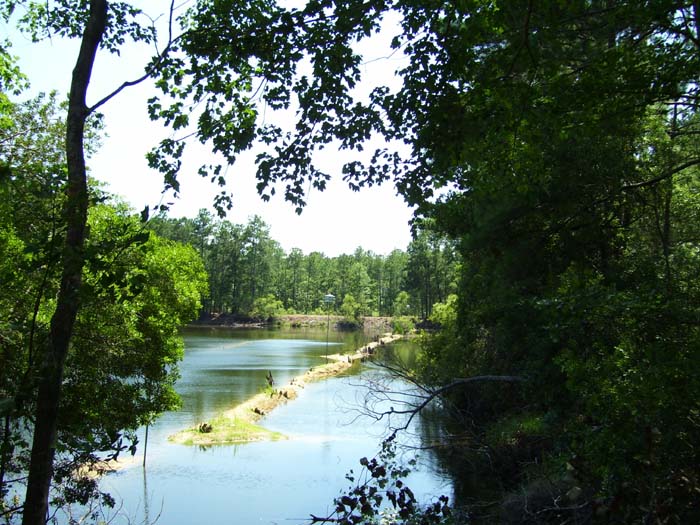 At that point I took out my camera, got the shot, put it away, looked down and saw my legs basically covered with mosquitoes...at least a dozen of them, and more circling looking for landing spots. I swatted them all off and rushed back out to the main road, after which I got one last shot of this alligator-infested pond (supposedly, at least...I didn't see any). Then I went back inside, got some more water, and left, whereupon I spent the next hour trying really hard not to scratch, and mostly failing. 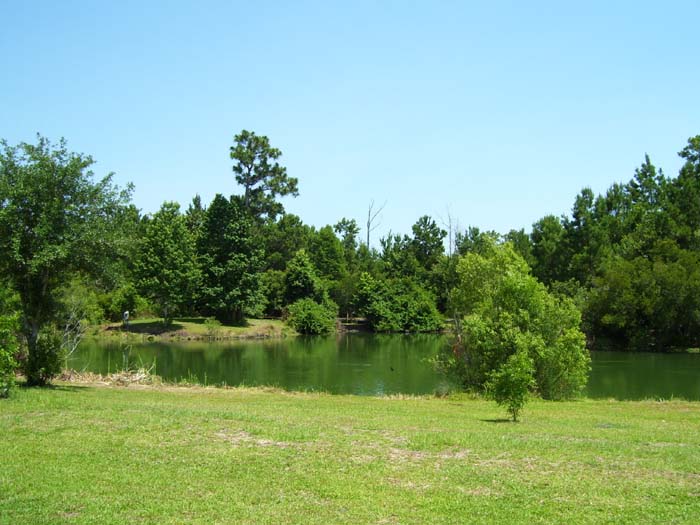 The rest of the day passed mostly uneventfully, although it did get very hot...almost, but not quite, as bad as those first few days back in Florida. The humidity's still high, but nothing like those days, so I didn't have too much trouble. Mostly I saw nothing but forest...you can see how thick it is around one of the few rivers I passed over. 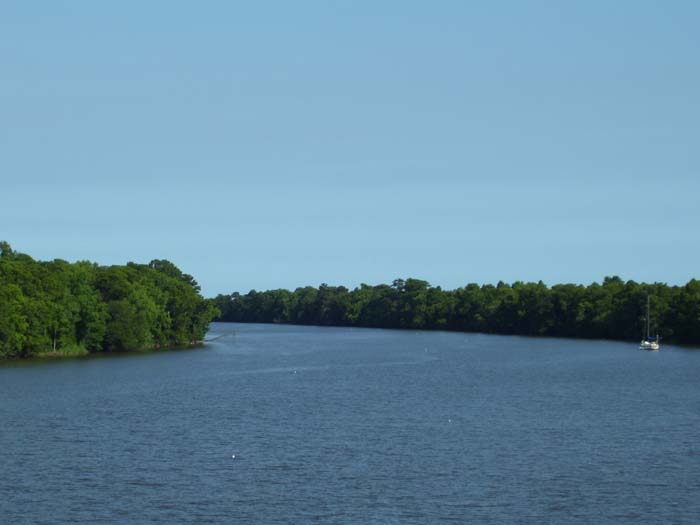 Finally, when I got to Georgetown, I faced another steep climb up a long bridge (not quite as long as this morning's, but pretty bad) and that's when I realized how much the heat had taken out of me. I barely made it to the top, but once I got there and snapped a couple pictures, I recovered quickly. I could tell I needed food now, though. (I haven't been eating anything at all until dinnertime for about a week now. I make it the whole day, even yesterday's 91 miles, on nothing but Gatorade and water. I really don't know why, but it works for me). Anyhow, here's one picture of Georgetown from the top of this bridge. 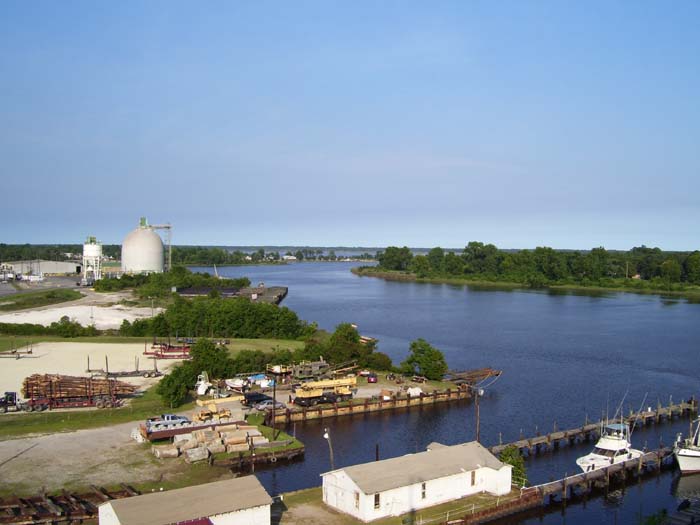 And another view to the left of that one. At least I had a shoulder on the bridge, right? That's the only shoulder I had all day. 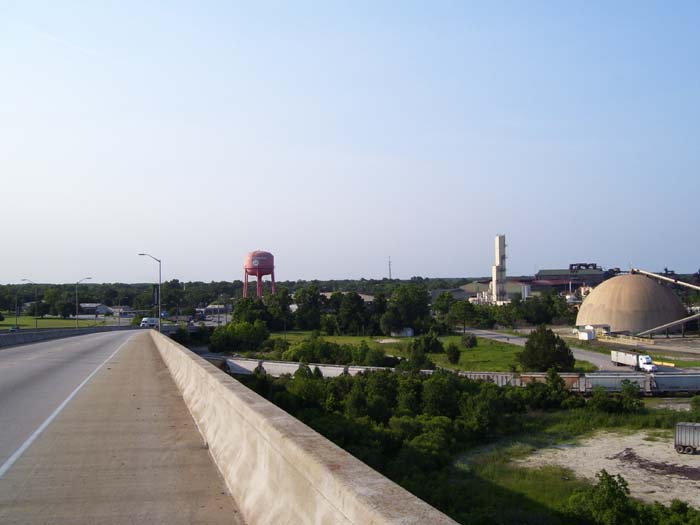 A couple miles after this, I found a hotel, got food, stuffed myself and took care of updating this. That's all for now...tomorrow, I return to the ocean with a trip to Myrtle Beach.