Today is the summer solstice, meaning it's the first day of summer and the longest day of the year (that is, the day with the most sunlight). So it seems somehow appropriate that most of the country experienced the hottest day of the year so far, including (unfortunately) South Carolina. Since I passed through Myrtle Beach and the rest of the "Grand Strand," I went past a lot of businesses with time and temperature readouts on their signs...and most of those were over 90 (the highest I saw being 95). It hasn't been this hot since I was in South Florida, and I could really feel it...I needed more breaks, and I started feeling that faint nausea and difficulty breathing again, although that might've come from all the exhaust fumes I had to breathe all day. Seriously, this place is packed with people...I'm still not entirely sure how I made it through some parts of US-17 without getting run off the road. And those roads had their own hazards, too, as you'll see shortly.

But first off, I had to climb a double bridge over the river leading out of Georgetown, right in my first mile of the trip. I could feel my leg muscles hurting already, which wasn't a good sign. Plus, even though I left just before 10am, it was already well into the 80s, so at the top I stopped to catch a little of the breeze and take this photo. Not much to see, really, but it's kind of picturesque, and this is as clear as the sky would be all day. 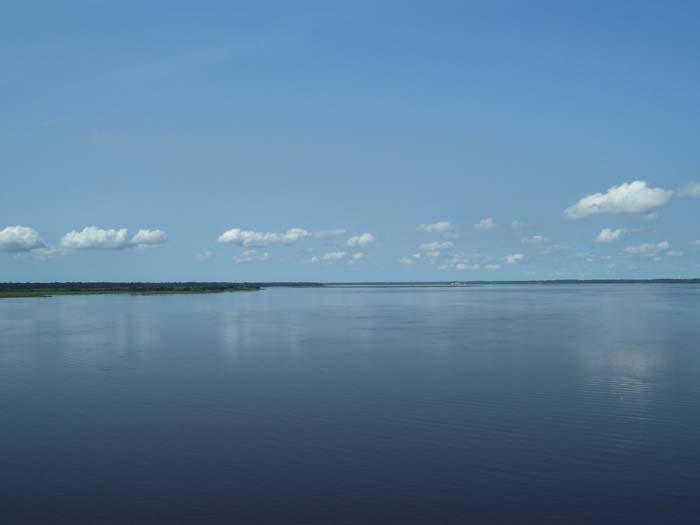 About 9 miles into the ride, I suddenly heard a thumping coming from somewhere underneath me, which means something's gone wrong with the bike. Hoping it was just a rock stuck in the brakes, or something like that, I quickly stopped to find what I really didn't want to see...this industrial size staple stuck right in the middle of my rear tire. Remember when I said I'd put those tire liners in the next time I got a puncture? Well, that didn't take long. Somehow, both ends of that rusty staple got jammed right through my kevlar-lined puncture-resistant tire, and of course a double puncture is almost impossible to patch, so I had to switch to one of my two spares. At least the liner's in there now, though...although I'm really not even sure that would've stopped this inch-long (seriously) chunk of metal. How something like that positions itself to drive straight into my tire, I've got no idea. 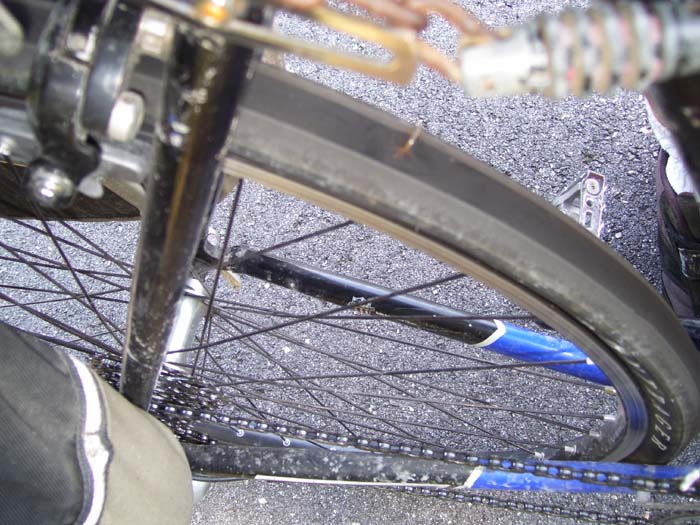 So after about a 45 minute delay, by which point the temperature started to approach 90, I headed offf down US-17 towards Myrtle Beach. A few miles later I came across this bike path winding along through the trees near the road, and got to enjoy some shade for a few miles before it just came to an end, dumping me back on the busy highway. By this point I'd started laboring pretty hard, mostly because the air pressure in my rear tire hadn't been pumped up high enough, something I rectified later, but I'm sure the heat didn't do me any favors. 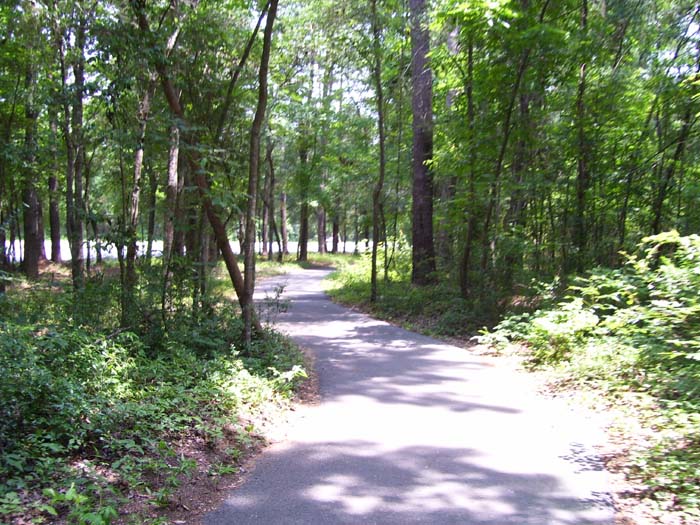 Finally, Myrtle Beach...which actually had its own bike lane through almost the entire town. Not that it mattered much, since people just turned right in front of me, or pulled outof hotel parking lots without looking, pretty much all day long. I even had a guy make a left turn without seeing me at all, forcing me to almost slam on my brakes to avoid getting run over. Did he somehow not see me, or what? 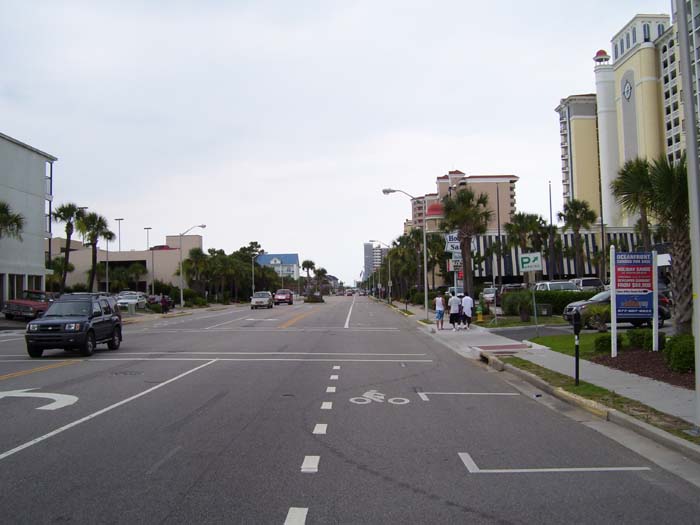 But not everyone was rude and careless. I spoke with several random people today, all of whom seemed genuinely interested in where I'd been and where I was headed. One worked in the McDonalds where I had my second break, another was riding his bike to work in one of the hotels, and the third worked in the pizza place where I got dinner. If any of you are reading this, thanks for talking to me...every little bit of encouragement helps!

But back to the ride...once in the center of Myrtle Beach, I and my bike went up to the third floor restuarant at one of the piers, where I enjoyed a nice break and took this photo of the boardwalk and beachfront down below. Too bad it was overcast or this might look better. Like I said, it's pretty crowded down there. 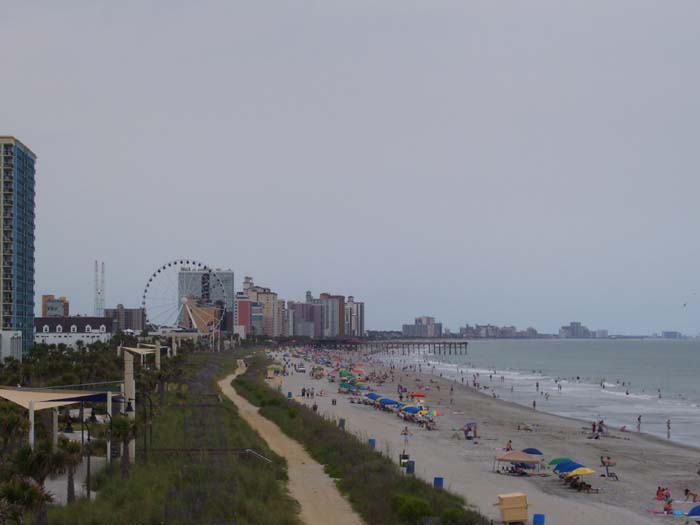 Speaking of the boardwalk, after the break I rode along that for a while, which I probably wasn't supposed to do, but I got away with it. 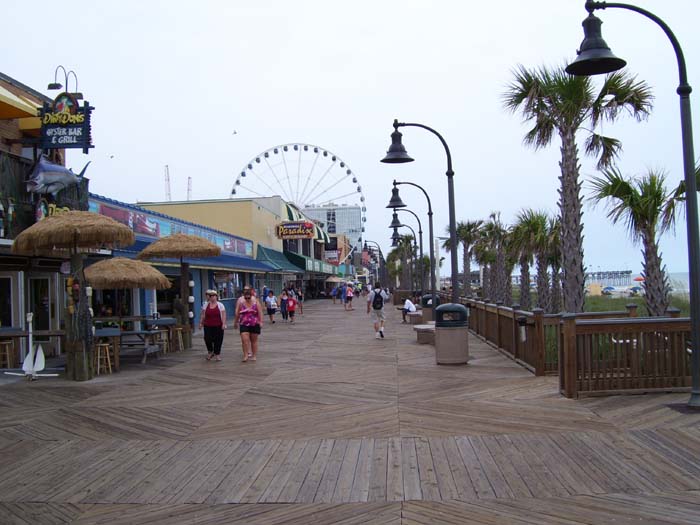 It kept getting hotter, so I started looking or reasons to stop and take quick breaks all the way along the rest of the ride. I saw tons of adventure golf (miniature golf, that is) places, including this one here, which I just had to take a picture of. They actually had a plane "crashing" at Mayday Golf here in the North Myrtle Beach area someplace. I also saw erupting volcanos, pirate ships and plenty of other choices. If you like miniature golf, this is the place for you. 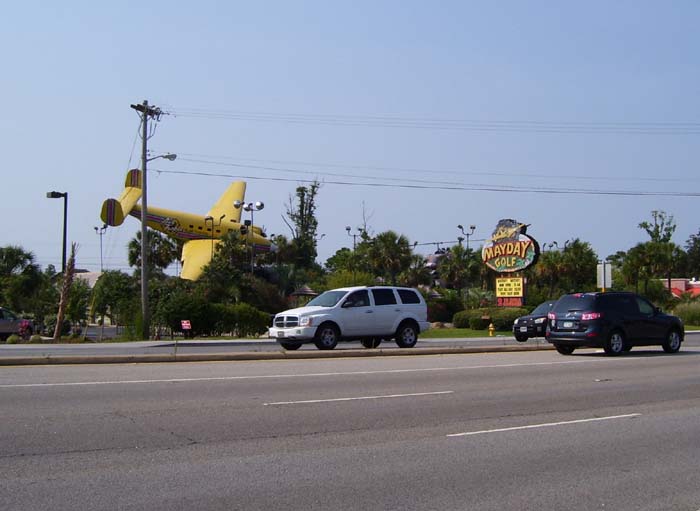 Then it was back across the Intercoastal Waterway on my last climb of the day, giving me this nice view of the numerous docks and riverside businesses all along the shore. 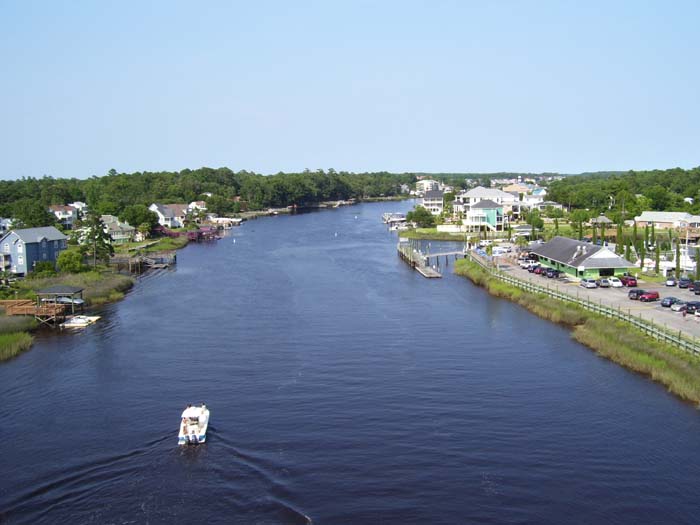 I managed to eke out another 10 miles or so after this until reaching Little River, which according to my maps is the very last place to get a hotel before Wilmington, about 60 miles away. Obviously there's no way in hell I'm doing another 60 miles in this heat, so I had to stop. There were only a few places to stay here, all of which were $70+ except this one little local place called the Mineola Motel, which was $40...but didn't have internet. The room's really nice, though, and unlike a few hotels I've been in, I actually fit in the shower. So rather than pay an extra $30 just to get wi-fi, I went with the cheaper option.

Now one last thing before I sign off for today. I've been having problems with my feet for the last few days, primarily because standing on the same spot in my bike shoes all day starts to wear on me. Yesterday it got so bad I could hardly walk after finishing. Here's why...this photo shows the bottom of my shoe, which has a clip recessed into it. That clip goes into the corresponding slot on the pedal (to the right). So because the clip, called "SPD" in the parlance of bicyclers, sits in a hollowed-out area on the bottom of my shoe, there's not a lot of material between that and my foot. As you can imagine, having this clip pressing down on the same place all day long gets pretty annoying. 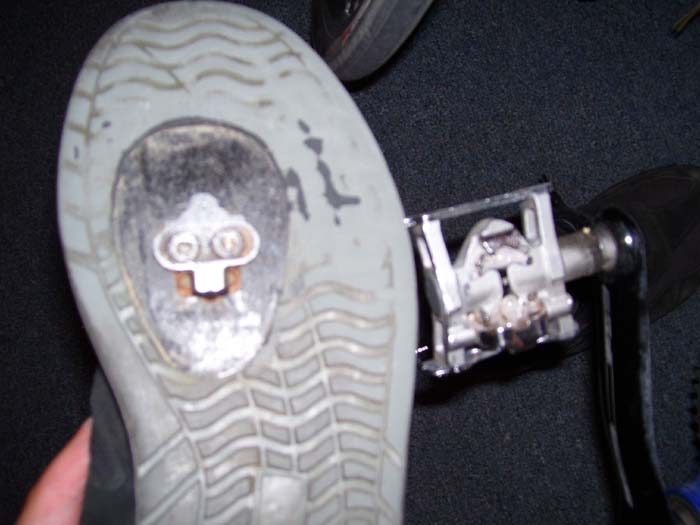 Anyway, I've tried several solutions to this, including folding up some toilet paper as padding, or wearing 2 pairs of shoes, but those don't work. Finally I bought some of those gel pads and put those in, but results were inconclusive. We'll see if things get better in the next few days.