As cycling days go (this tour), today turned out to be one of the better ones. I had a reservation (as I likely will for the next few days due to the coming holiday) at a Motel 6 in New Jersey, and the weather promised to be less steamy (it still got into the 90s, but that's not so bad compared to the 100+ of the last three days). Plus I was supposed to have a light tailwind, and best of all, the hills finally let up a bit. In fact, I only experienced a couple that really slowed me down all that much, and after what I went through yesterday, they didn't seem that bad at all. I got to the 36-mile point with only 2 breaks and basically enjoyed a nice morning, until the wind slowly turned to the north and started hassling me. But after all the trouble I've had the last week, today still felt like a breeze. I got to my destination before 5pm, and that was after spending some time touring in Philadelphia, too.

Anyway, almost immediately after leaving my hotel, I moved on into a state I've never visited before, Delaware. Here's the photo (this is the only state welcome sign I saw all day, even though I entered two more states). Oh, and notice that comment under the sign? Home of tax-free shopping...yep, they've got no sales tax here. When I stopped for my usual $1 drink at McDonalds, I didn't have to fish in my pocket for change. Oh, and they also don't allow texting or talking on cell phones while driving, either. I like this state already. 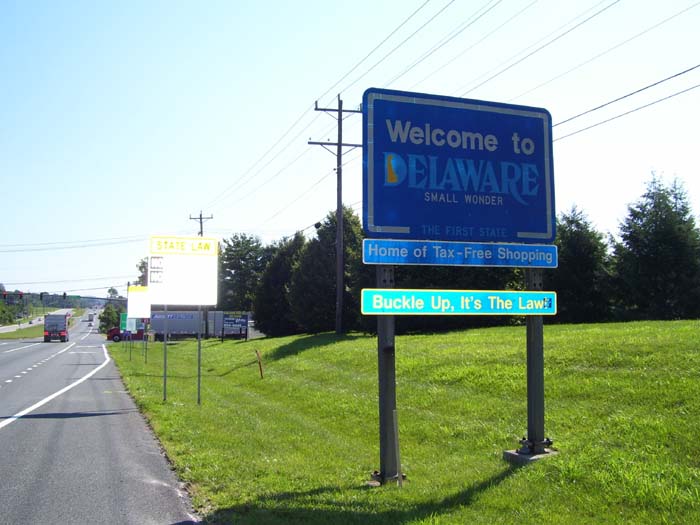 Shortly after this I actually found a bike path running along the road (this is after I turned onto Delaware Route 4, which I followed for quite a ways). 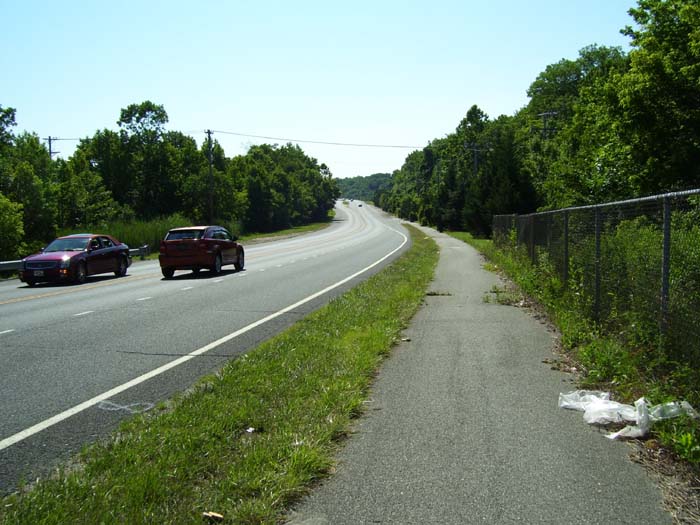 However, the path was littered with debris and cracks, and once I got this shoulder here, I stopped using the path altogether (why bother?). It went away a few miles later anyway. 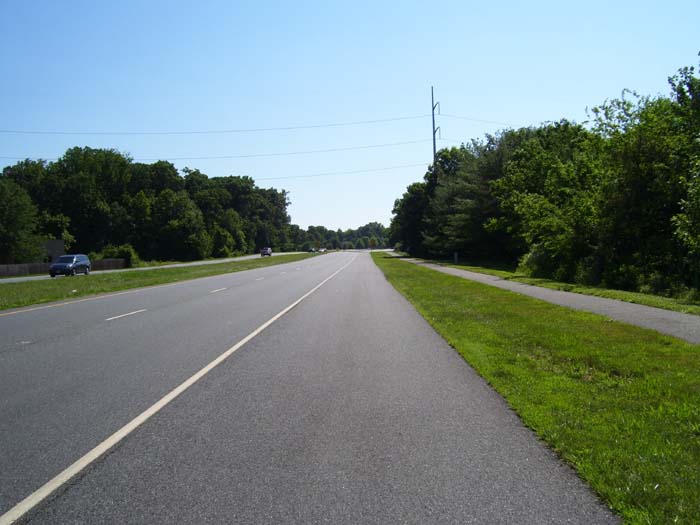 Continuing on, I soon came to Wilmington, a pretty large city (something I'll be seeing a lot of these days, apparently). Up ahead is one of the few hills I had to deal with today...a far cry from the steep climbs everywhere around Baltimore. 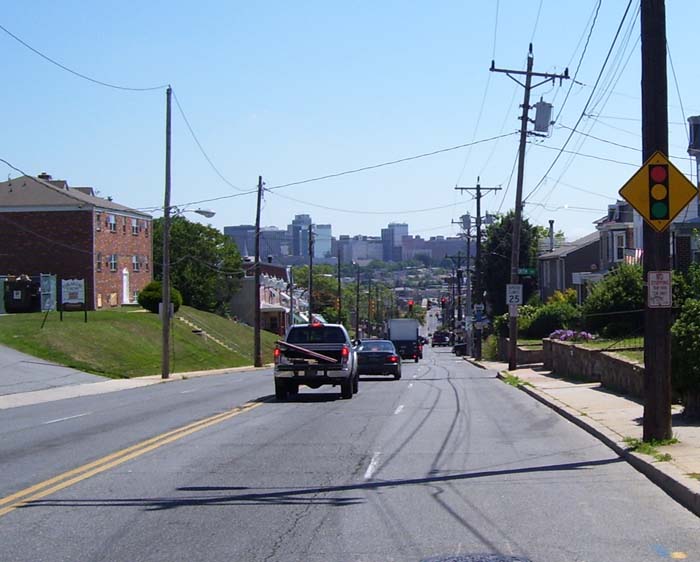 Sometime after passing through Wilmington, I crossed into Pennsylvania (a state I've biked in before), but this is the only welcome sign I ever saw. Oh, and those industrial type structures were all over the place today, too. Not the most scenic area to ride through. 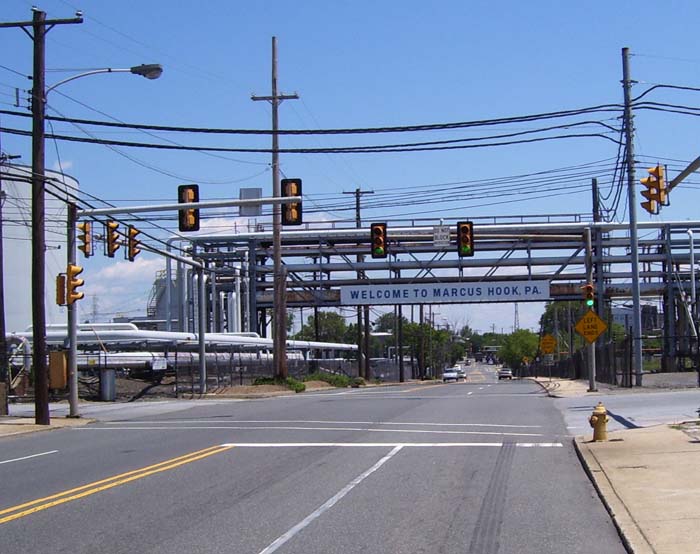 About 15 miles from Philly I came to this stadium, tucked in among some highway loops and a high bridge. I'd never heard of PPL Park before...turns out it's where the Philadelphia Union (a Major League Soccer team) plays. 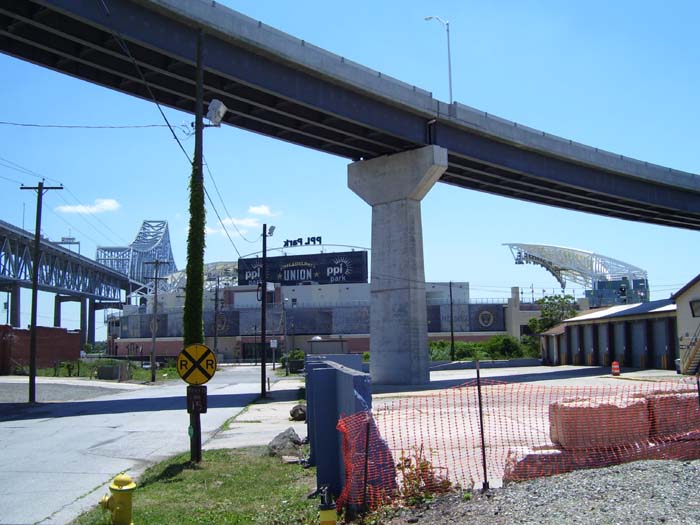 Moving along, I encountered Bridge Adventure #1 for the day...a closed bridge that would've sent me at least 5 miles out of my way. There was no warning about this until I reached the bridge itself, either. However, as I sat there wondering about it, I noticed that traffic coming from up ahead. How could those guys get across the bridge if it's "out"? Well, the answer is, it wasn't "out," they had it down to one lane and only westbound traffic could come through. And guess what, it had a sidewalk. So all I did was wait for a break in traffic, get up on the sidewalk, and walk my bike across. Problem solved. 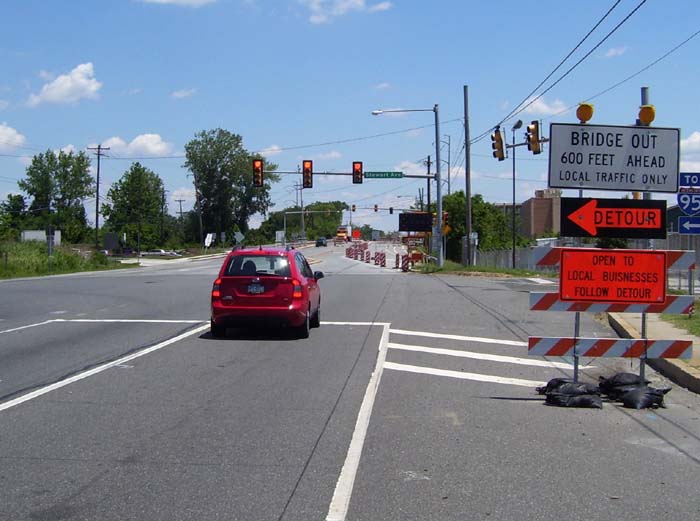 A bit further on, my route took me to the Philadelphia airport. Turns out I had to actually go right through the airport, not around the front or anything like that. So I'm sure all those people at the baggage claims and taxi stations were wondering what the hell I was doing riding through there, but whatever gets the job done, I suppose. 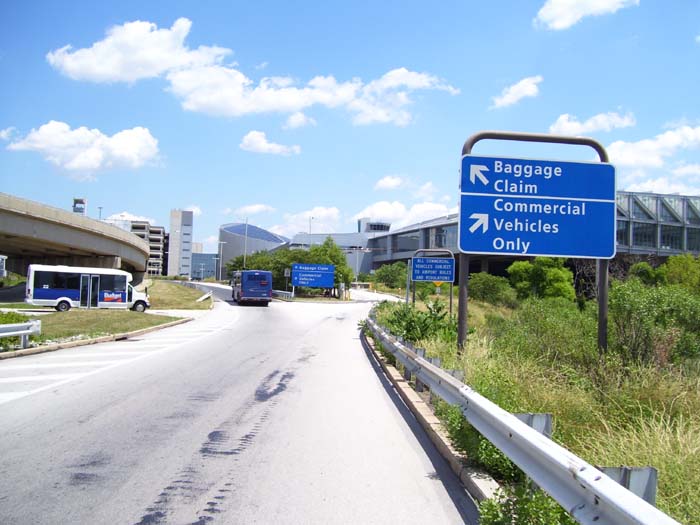 Right after that it's Bridge Adventure #2, as the route I was on took me to this bridge...which would've been okay to ride on, except for this construction that had it down to a two-lane road (oh and notice that it's speed limit 35, but the display way up there is showing "50"...nobody was obeying that speed limit). So yeah, 2-lane narrow bridge with no shoulder? Legal or not, I think I'll go another way. I wound up heading a couple miles north and taking a much nicer bridge over, one that actually had a pedestrian path separate from the main road. 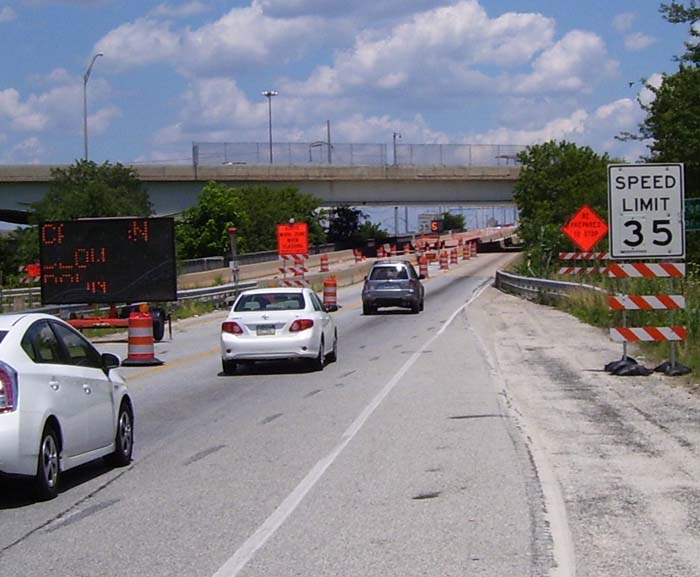 In fact, here's the view of Philadelphia from that same bridge (to my left). 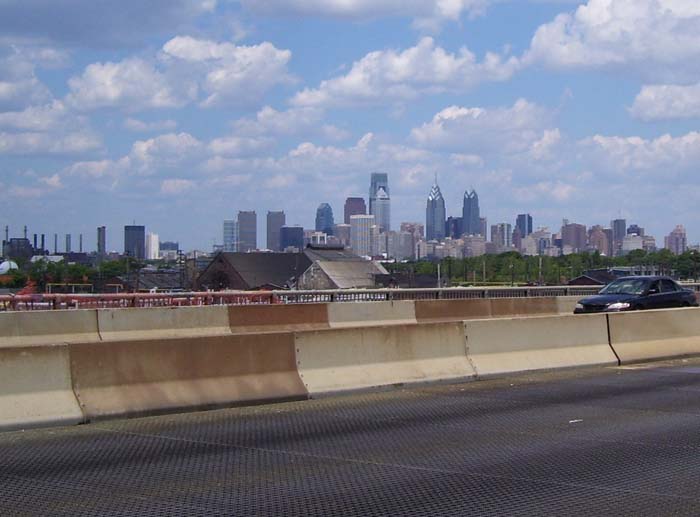 This is the view looking to the right. Again, not so scenic.. 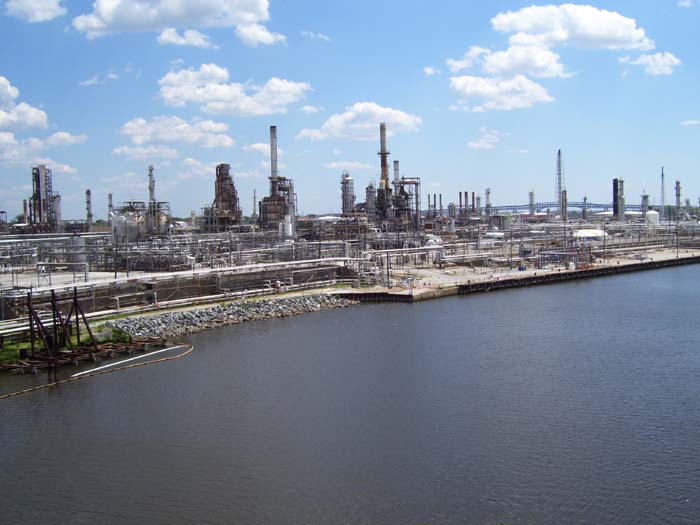 After reaching the end of the bridge and navigating a few challenging turns, I made my way into Philadelphia, which I rode all the way through on my way towards the tourist stuff. This is what the roads looked like most of the way...one-way, one-lane routes packed with parked cars. But I didn't encounter much moving traffic, because through traffic stuck to the larger streets, and there were so many stop signs and lights that nobody could ever catch up to me.

Finally, I got to the Liberty Bell, which used to be in Independence Hall but is now kept in a nearby climate-controlled building. The line to get inside was 45 minutes long, so I didn't bother, since they had a viewing window outside. Here's the plaque on the nearby wall (click for larger, readable view). 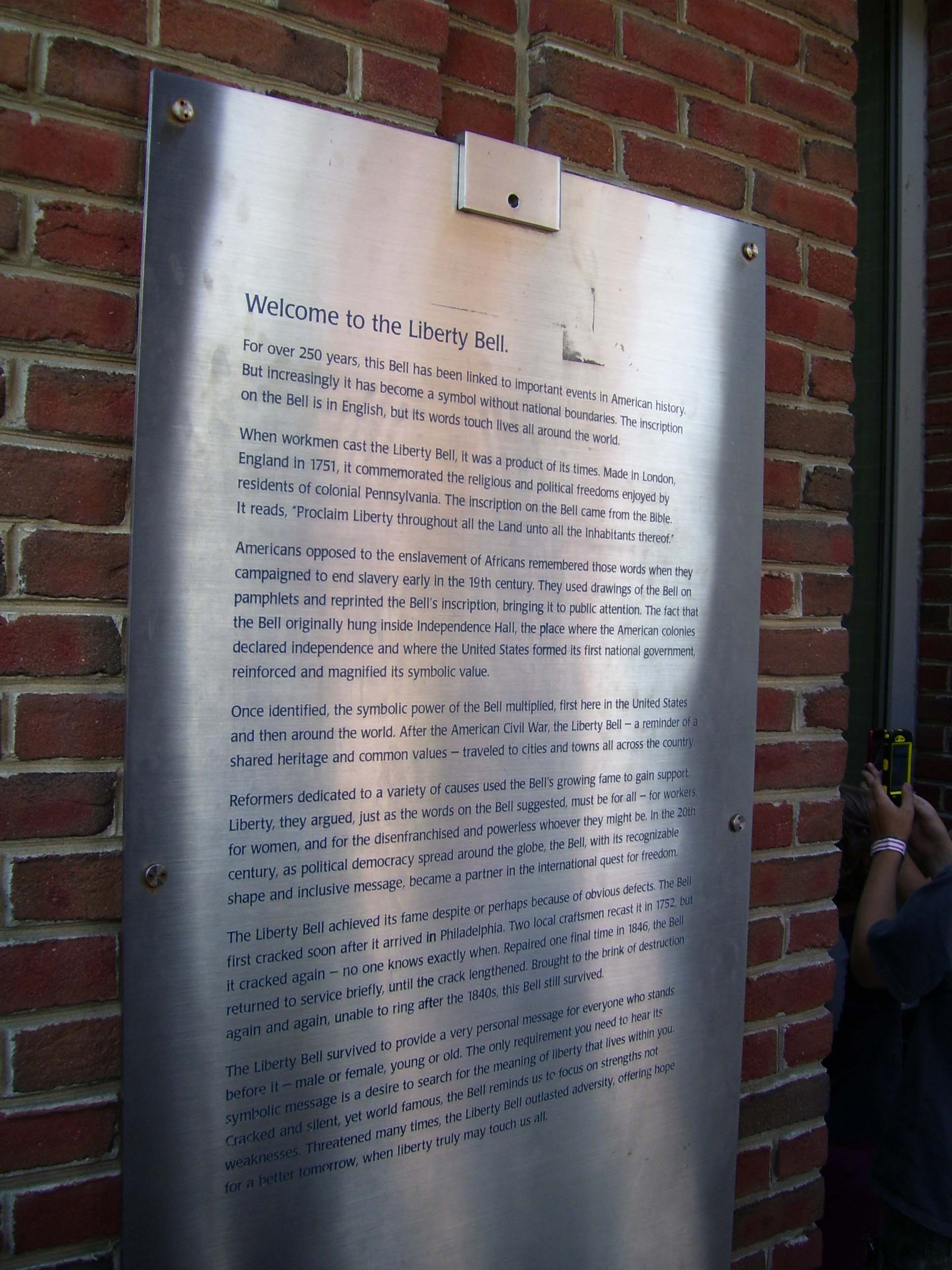 And here's the bell itself. I can't deactivate the flash on this camera, and it insisted on going off in this shadowed area, so I covered it up with my hand as best I could. This is the only picture that came out...sorry for the red glare. 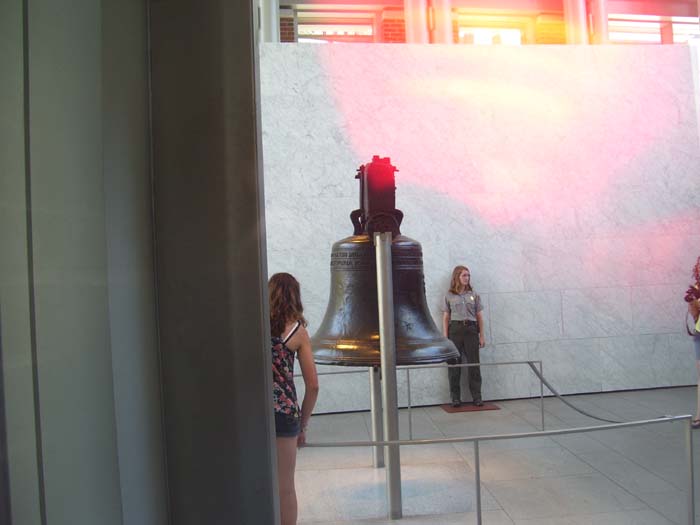 Just a short distance away from here stands Independence Hall. Just below the edge of the picture (which I cut off on purpose) they were busy building some kind of Fourth of July structure, so I didn't include that. 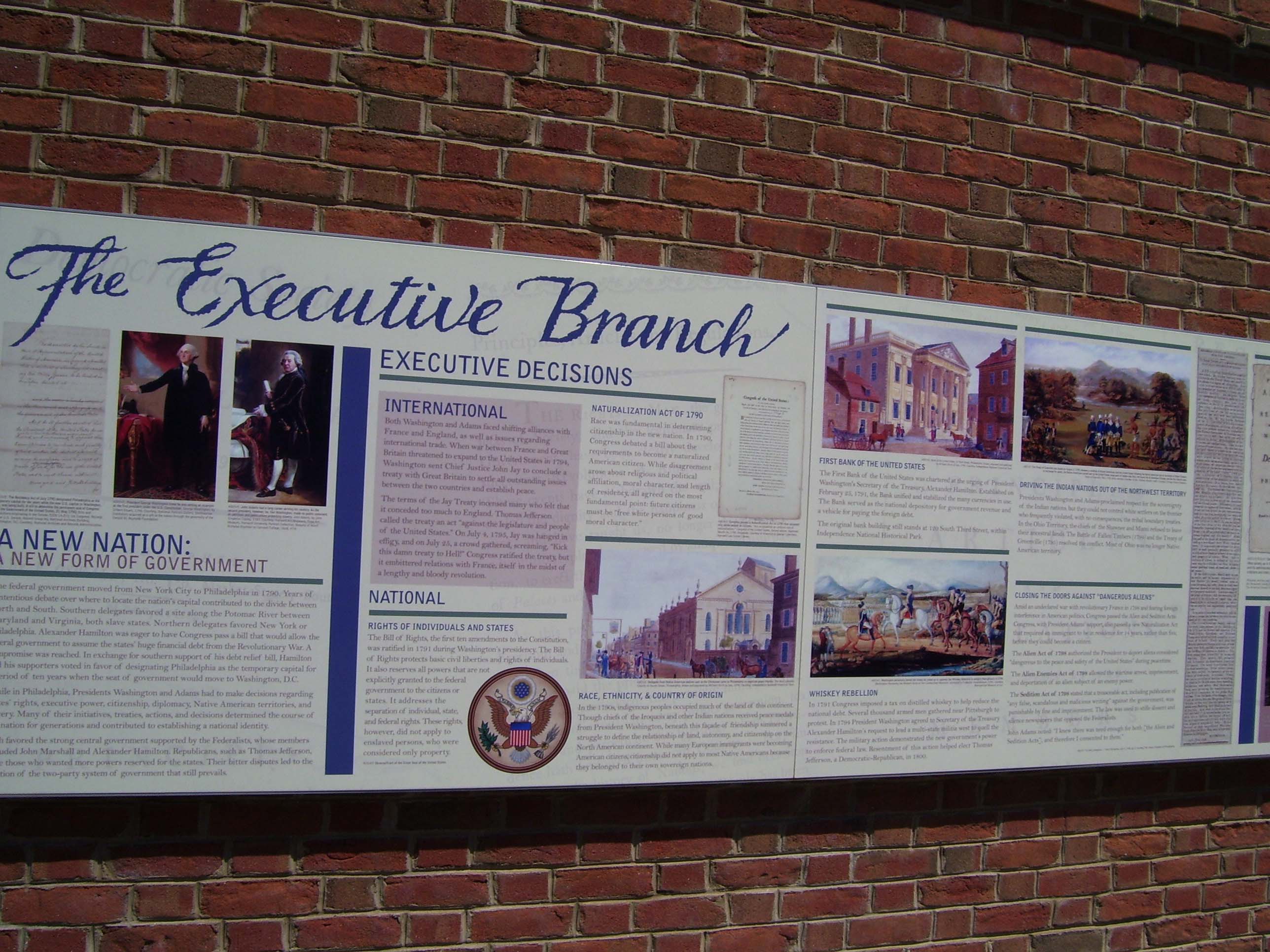 And across the street is the National Constitution Center, which doesn't actually house the Constitution, but rather has all kinds of facts and presentations about it and those who drafted or signed it. They also had the second floor all set up for election coverage. 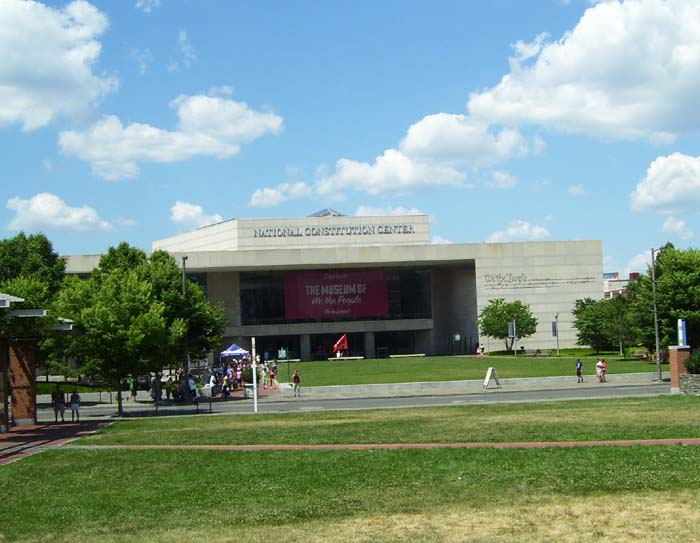 And right around the corner from here is the cemetery where Benjamin Franklin rests. 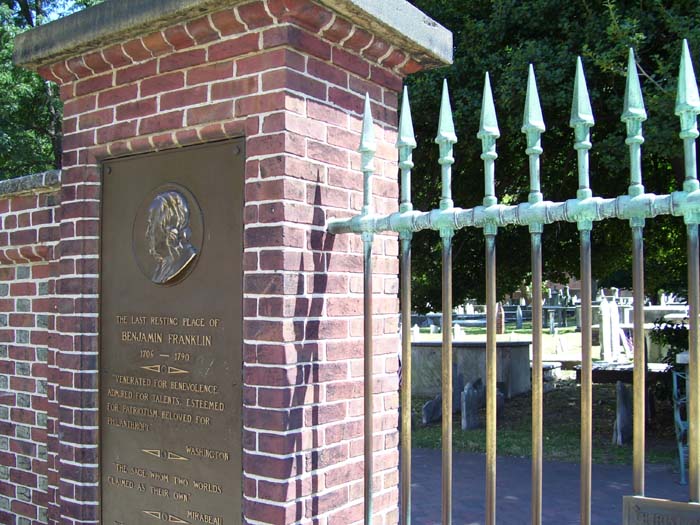 And that was it for tourist stuff in Philly. The entrance to the Benjamin Franklin Bridge wasn't far, and this is what it looked like going up (and up, and up, and up....) 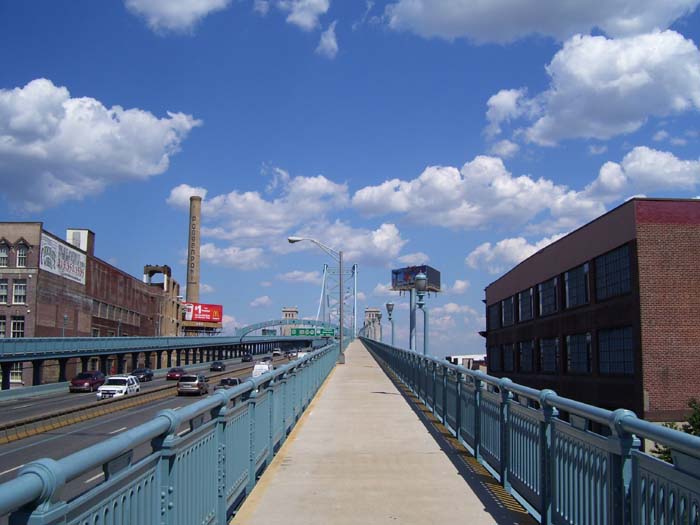 About halfway over, I took this photo looking back at the city. You can see there's actually a rail line running along under the bridge (with a train on it, as it turns out).

Looking out over the river, just to the left of the above scene. 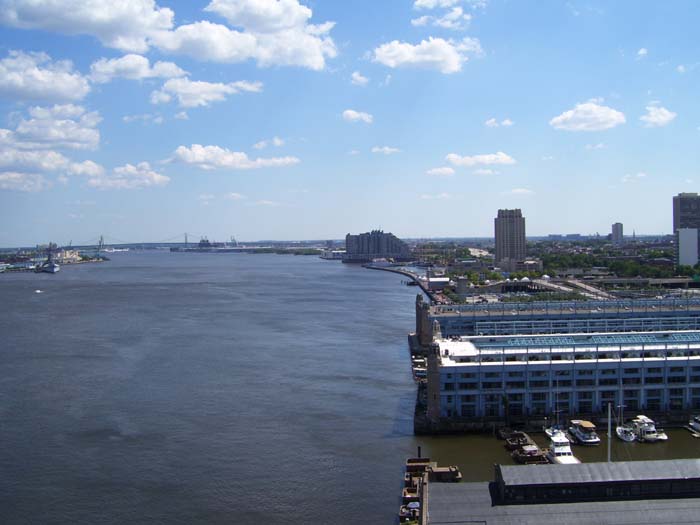 And this is the view looking ahead, at Camden, New Jersey. 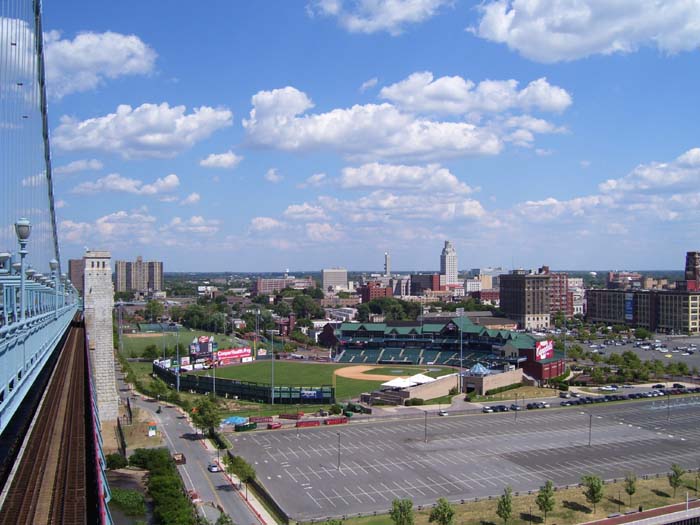 The bridge ended at a stairway, which I had a lot of trouble hauling my heavy bike down (good thing I didn't have camping gear still). Why they didn't finish the ramp, I had no idea. And as I headed into Jersey, I found the road intolerably bad. They'd built it out of rectangular sections of concrete that no longer lined up properly, so every 10 feet or so I'd drop down a few inches into the next block. Combine that with all the cracks and debris and occasional gullies carved the width of the road (no idea what that was all about), I felt like I was barely moving. But then after about 5 miles I came to a wall blocking access to a major thoroughfare, and after going around that, everything got much better. I did find some really weird intersections (like a place where two major streets intersected at an angle, but formed a kind of half traffic circle), but otherwise it didn't seem all that bad. We'll see how that holds out tomorrow as I head deeper into New Jersey on my way to the fringes of New York City.