Before I get started talking about today's ride, let's talk about my search for a hotel room for tonight. Normally, when I get to my room on any given night, I update this page (not all at once, but I at least get started by transferring the Google Maps route to the new webpage), and then take a look at tomorrow's potential riding options. Looking at the map, I could see that the New London/Groton area was around 60-65 miles away, and there were plenty of hotels in the area. So I didn't feel that concerned at first. Then I checked a few websites, like Motel6.com (where I found the nearest Motel 6 was going for $85, a bad sign) and Super8.com (which shows anything in the Wyndham group, like Super8, Knights Inn, Days Inn, and more upscale places). The nearest Super8 and Knights Inns were both full and the Days Inn was quoting a rate of over $100. Now I started getting worried.

As it turns out, I'd picked up one of these coupon books, which are good ways to find low priced places to stop along major interstates. I had one of these books back in Florida and the Carolinas, but after leaving the I-95 corridor, I didn't need that one anymore. So I pulled out the Northeast area one, shown below, and had a look. 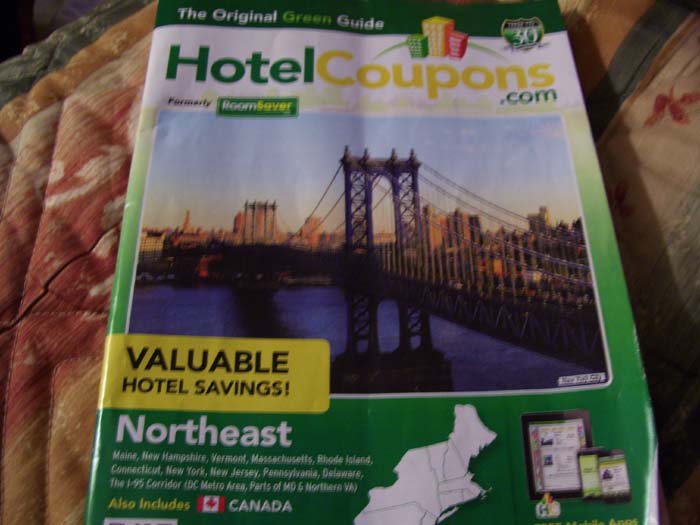 Here's the page of coupons for the New London/Groton area. Not too bad...there's a few low priced ones, right? But forget the Super8 and Ramada and Days Inn...they're full, according to the website. And look closely at the prices. It's hard to see on the fuzzy image, but they all say "Sun-Thur" for the rate quoted, with a higher price for Fridays and Saturdays. The EconoLodge ad at the bottom is easiest to read. $49.99, add $10 on Friday and $20 on Saturday. Fair enough, weekend rates, I get that. 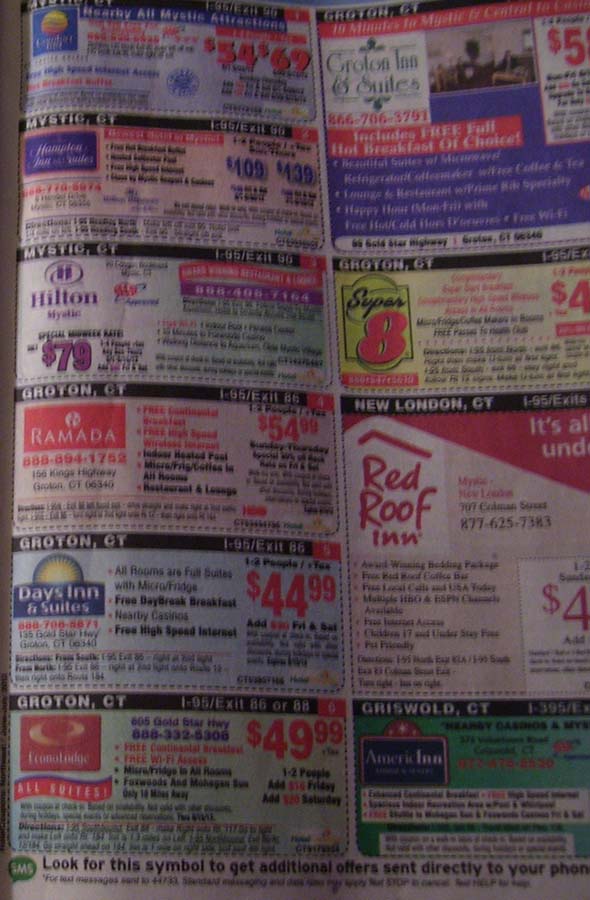 So I checked EconoLodge's website, and they showed a price of $99 for tomorrow, which is of course a Friday. That's a lot more than the $59.99 with the coupon. I called them to ask, and they said they wouldn't honor the coupon because of the holiday (which was 2 days ago, but whatever). Back to hunting.

Okay...here's a local hotel, not a chain, and it's the only coupon on the page that doesn't increase the price on Friday, just on Saturday. See below for a readable close-up view. Also, see that note about casinos? Aha, that explains why the rates go up so much on weekends. Anyway, I call them, and they tell me the rate for tomorrow is $129, and they won't honor the coupon because of a Corvette show that's in town (on Sunday, as it turns out). Wow, really, you doubled the price? Sheesh... 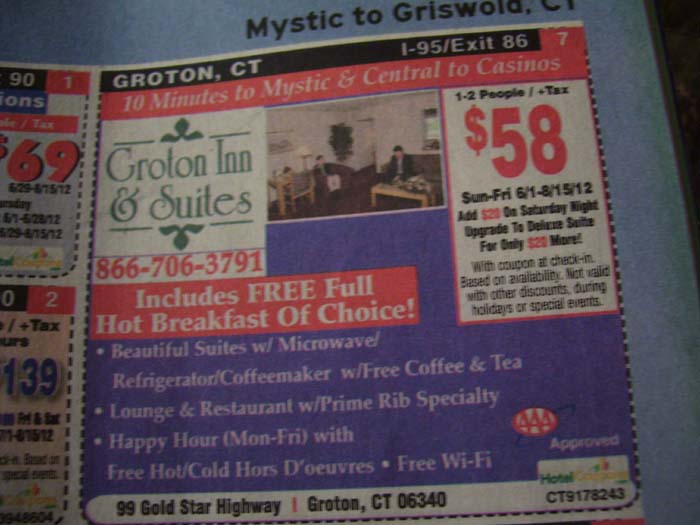 Anyway, I checked a bunch more hotels and got the same basic story every time...they were either full, or had their rates jacked up too high to be affordable. The best in Groton I could come up with was $89. Bookings.com, though, showed me an America's Best Value in nearby Niantic (about 8 miles west) for only $55, but there were only a few left at that price. Well, I wanted to ride farther, but for a price difference of $30, 8 miles just isn't worth it. So I made the reservation, glad to have taken care of this beforehand, because the alternative would've been to arrive in Groton tonight and learn all this the hard way.

So with my destination already picked out, I started riding around 10:15 and passed through New Haven shortly thereafter. Here's a random shot from inside the city limits. 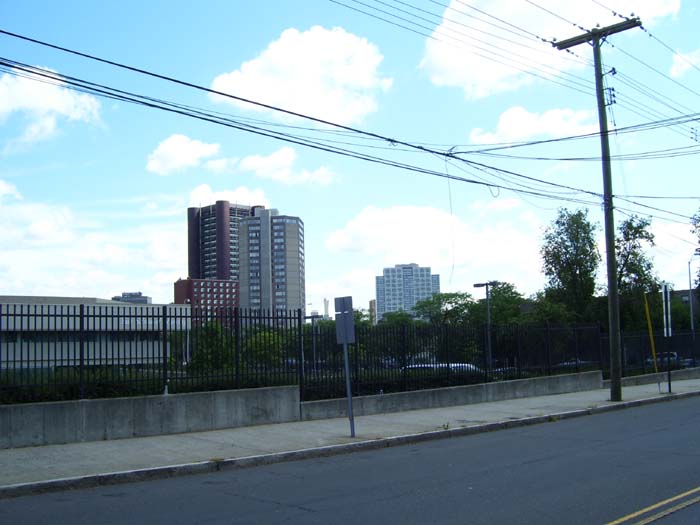 A bit further on, passing under I-95 for what seems like the hundredth time this trip, I came across this sign...I've never seen that one before. Guess I'd better be careful on those tracks, huh? They turned out to not be that bad, actually. I guess they did some road work but forgot to remove the sign. 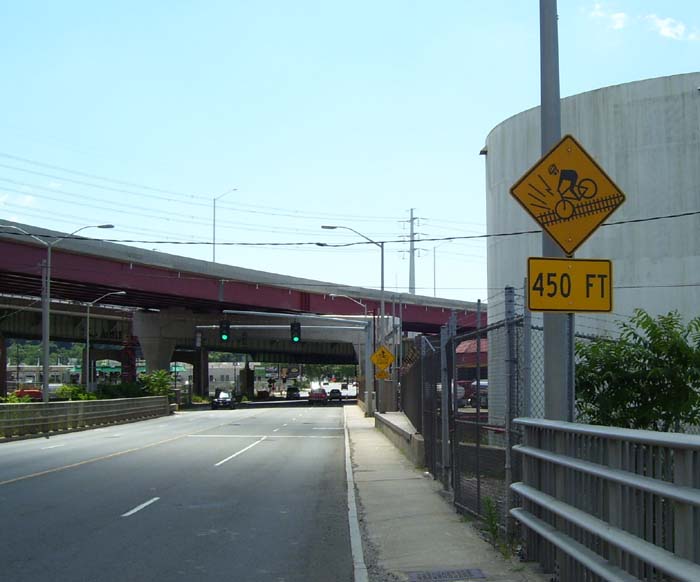 For the first time in a few days I acually had a few periods of flat riding, and noticed the bike seemed to be moving a little sluggishly. Well, it's been a while since my last infusion of air in the tires, so I figured it was time to find a bike shop. Sure enough, about 5 miles later I spotted this one (right near a McDonalds, too, so I could take a break and get a drink). The guy manning the repair counter was friendly and genuinely interested in my trip, and pumped up my tires (which were down about 20 psi) for no charge. Here's a shot of the exterior...I particularly like the bicycle up on the roof. 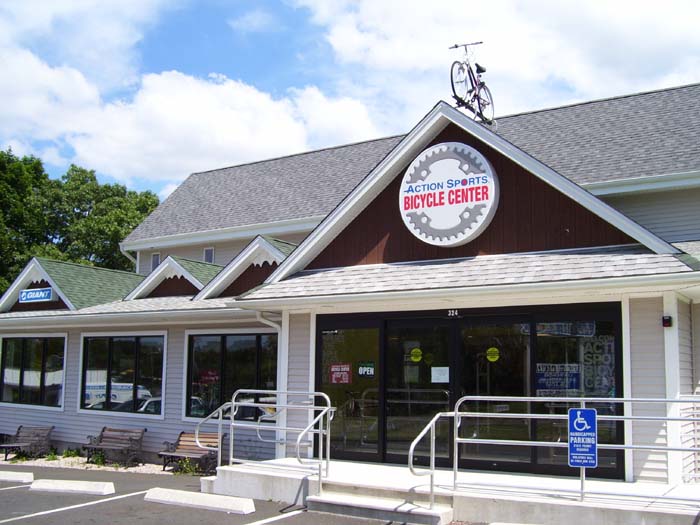 Then it was back to the road, which wound through several small towns, climbing a few hills but nothing severe like the previous couple of days. Here's a random street shot, where you can see the decent shoulder and fair conditions I enjoyed most of the day. 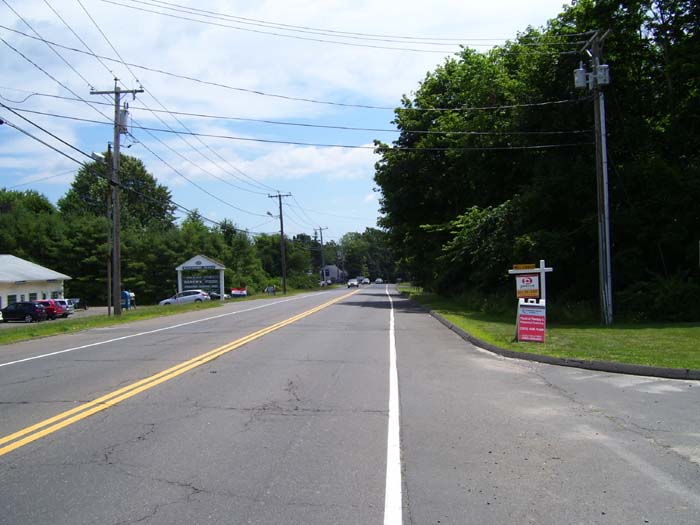 And here's one of those small towns. Notice I'm back on US-1, actually having linked back up with it yesterday (but the picture didn't come out). I'll be on US-1 for quite a bit longer, actually...almost the entire rest of the ride. 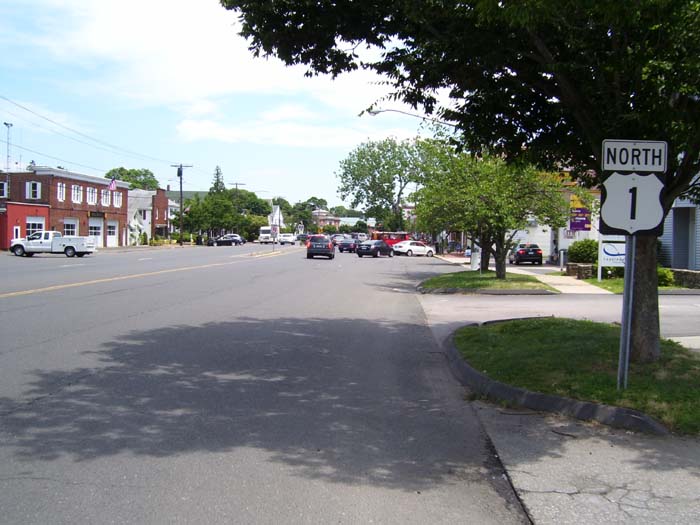 The road got close to the ocean several times, passing over plenty of small rivers and close to lots of crowded marinas. 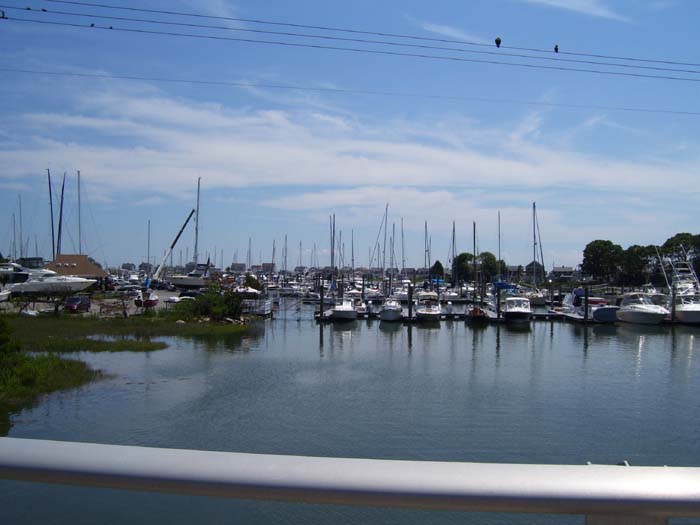 Another one of those amazing New England churches. 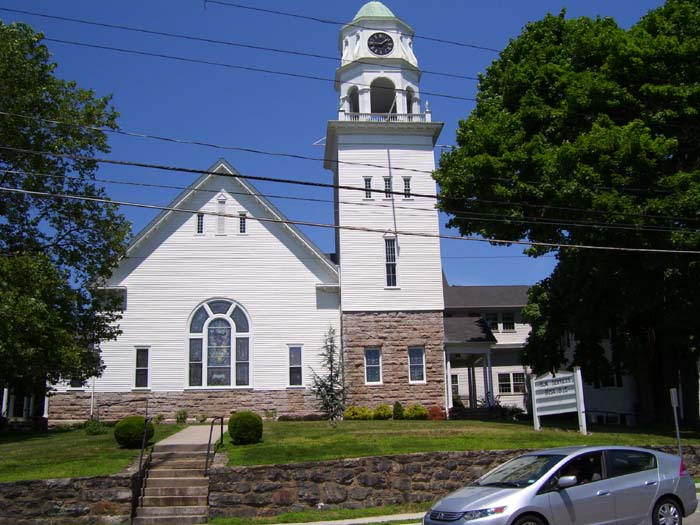 The only major bridge today was over the Connecticut River. I found the bridge easily enough, but how do I get on it? I couldn't seem to find any way up to the pedestrian accessway I knew was there (I checked yesterday to be sure). Turns out the only way on is from the opposite side of the highway. Fortunately, a couple of bike route markers led me there. 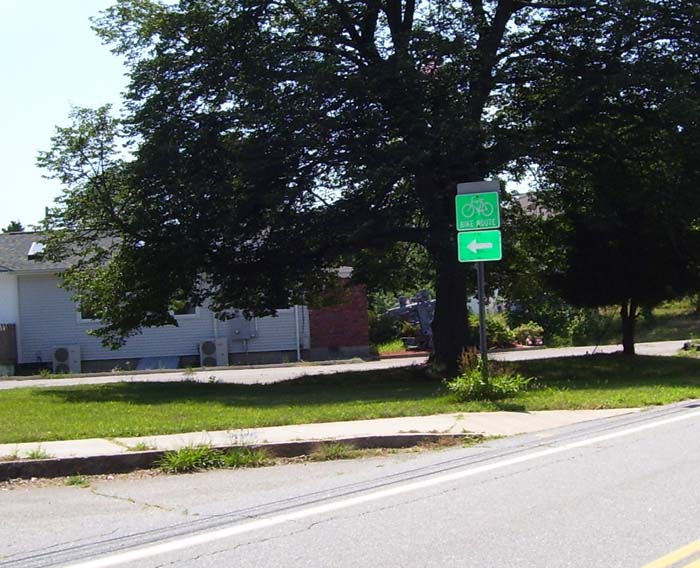 Here's the view looking ahead on the bridge, which I share with I-95. The pedestrian walkway is wide and clean, and in fact, while I stood there looking aound, someone went past me on a motor scooter. This is the first time I've had to share any bike route with a motorized vehicle anywhere on this tour, but I suppose this is the only way a scooter could get across this bridge, so I can understand that (plus there's plenty of room, anyway). 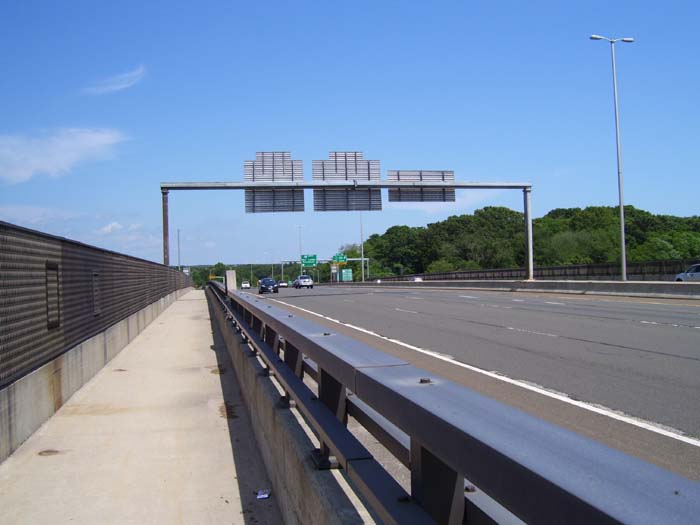 The obligatory view from the bridge (I had to stick my camera through that fence to get the shot). 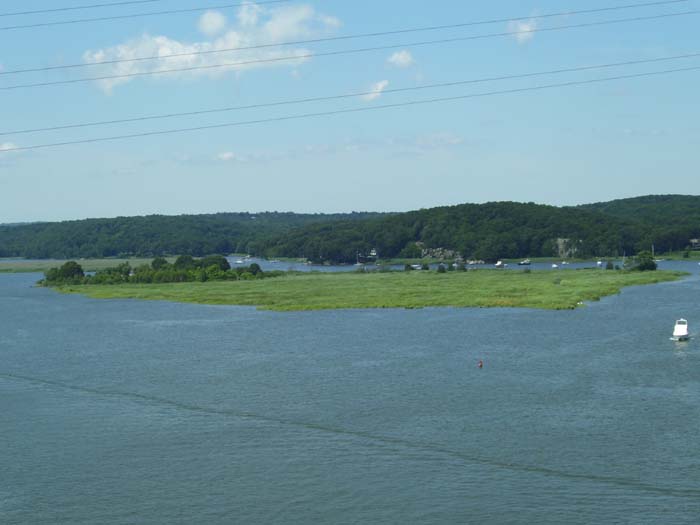 On the way off the bridge, they had a little bike path running off down a short hillside, with a sign saying "River View." I went ahead and checked it out, where I found this secluded little park looking over the river. This looked like a good stop for a break, and seeing as I still had plenty of water, I sat down on the nearby park bench and took this photo. Those plaques down there talk about the history of the river, its geology, and all the bridges that have crossed here. I probably spent 20 minutes relaxing and watching boats go by, and not one person intruded on me the whole time. This is a forgotten place, that's for sure...a little diamond in the rough, if you know where to find it. 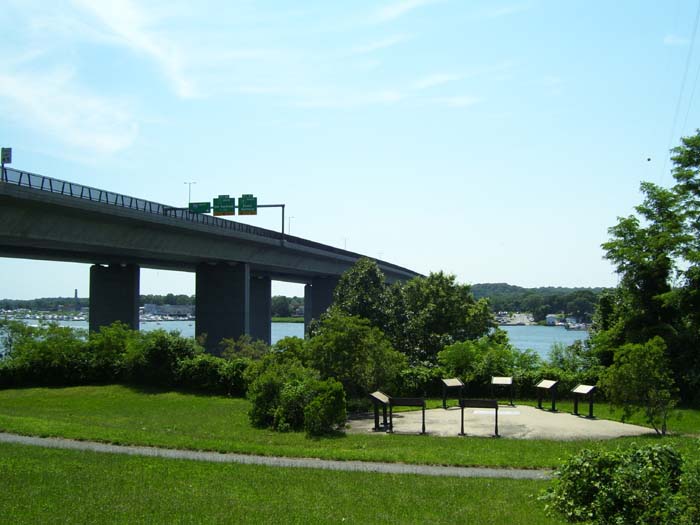 After that stop I had only about 10 more miles to go, which wound through some very nice scenery, and some shade, too. The heat wasn't as bad today as previous days, but 85+ is still uncomfortable, no matter how you slice it. 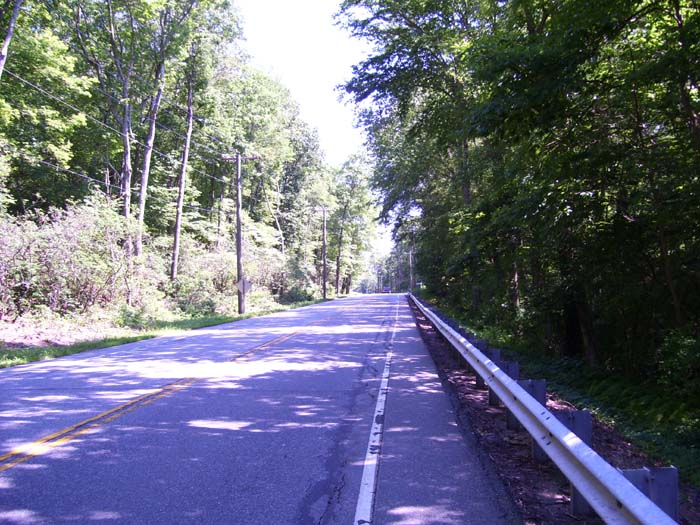 The worst hills of the day came in the last few miles through here, but I just took my time and enjoyed myself. Actually, as cycling days go, this was one of the better ones, even if it was just about getting from point A to point B. I'll have to go some extra miles tomorrow to make up for the shorter ride today, but if the weather holds up, I should be all right.