Today's ride looked easy on paper...just stay on US-1 all day, without any major towns or turns or anything. Within moments of leaving my hotel, though, the hills began, and didn't really let up until about the 55-mile point, although there was this one mile-long stretch at mile 28 that was basically flat. Somebody asked me the other day how this ride compares to the west coast, and I'll go into that more once I'm done with this tour, but basically, here's the thing...on the other side of the country, the hills went on and on, sometimes for two miles or more, which is extremely exhausting, but afterwards I could usually count on several miles of flat or downhill runs to compensate. Here, the hills are shorter, usually half a mile or less, but they come back to back to back, often with only a brief descent (if any), the rest of the elevation gain getting lost in some huge drop whenever I come to the next river. So basically, I'm still climbing just as much as on the west coast, just in a different way. And it's no less tiring, either. My legs are really sore, and have been for a couple of weeks.

But that's not to say it's horrible, awful torture. That part's behind me now, back when I had to climb like this in 100-degree weather. Today the high was in the low 80s, with a nice coastal wind cooling me off at the top of each hill, so I didn't mind so much. The weather makes all the difference, really. 15 or 20 degrees mean everything, it seems. Thats my number one lesson from this trip, that's for sure: the climbing's not too bad, as long as the temperature's comfortable. Again, I made pretty good time, despite all the hills, and also despite spending about a third of the day heading southeast into that wind I mentioned before. Best of all, the hills started to flatten out near the end, letting me cruise for the final 7 or 8 miles into town. Being able to cruise along like that is something of a treat for this trip, and I definitely enjoyed it.

Now for today's pictures. First off is one of several looks out over the water as I passed along one of the many bays and lakes US-1 goes past here in "Downeast" Maine. That house there sure has a great view, doesn't it? 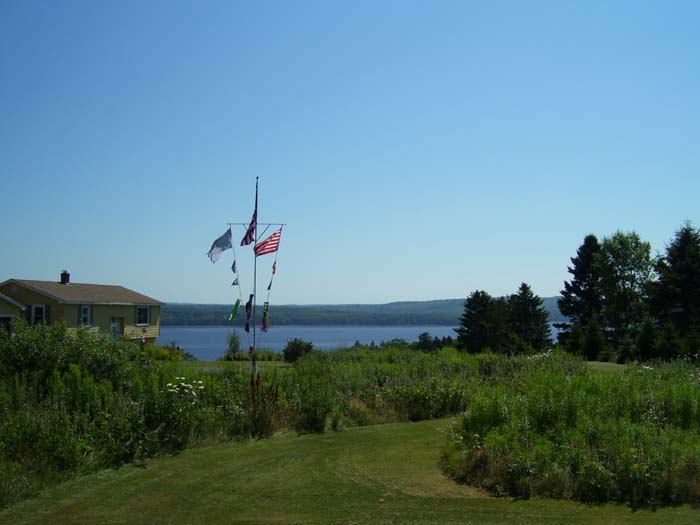 Speaking of houses with great views, how about this one here? It sits way down off the main road, accessable only via a tiny driveway, looking out over a lake you can barely see in the distance. 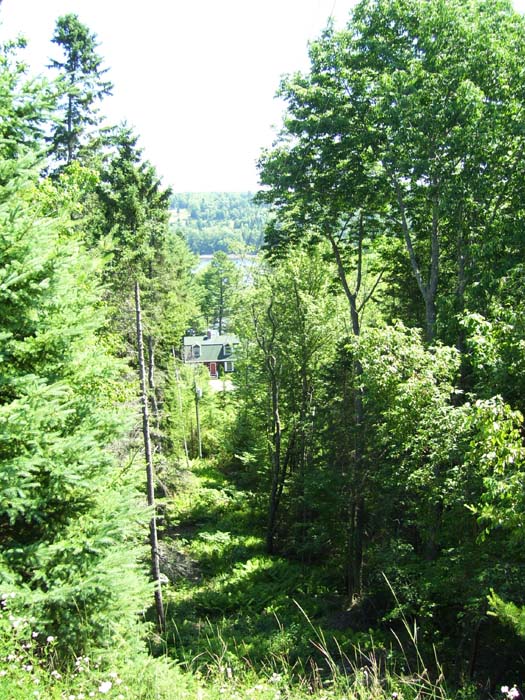 Shortly after that I reached this bridge over the Penobscot River. (Actually, there's a second bridge behind the more modern one...that's the shorter spans you can see in the background. That particular bridge is falling apart.) 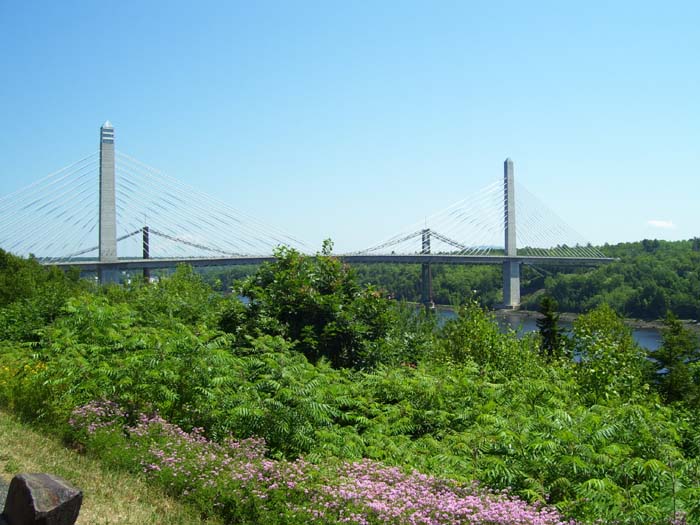 Approaching the bridge, you can see they really had to do some work on the hillside here to make the road connect up. I got the impression perhaps the original road was further to the right, but they moved it over here for safety reasons. Higher up there in the hill, higher than I wanted to climb, there's an observatory hiding there. 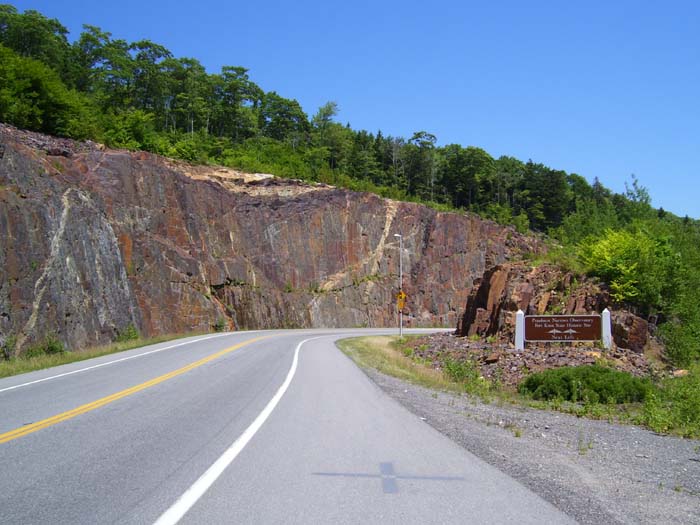 The view from this bridge was pretty spectacular, and the cool wind coming up this estuary felt fantastic (especially after climbing all the way up here). 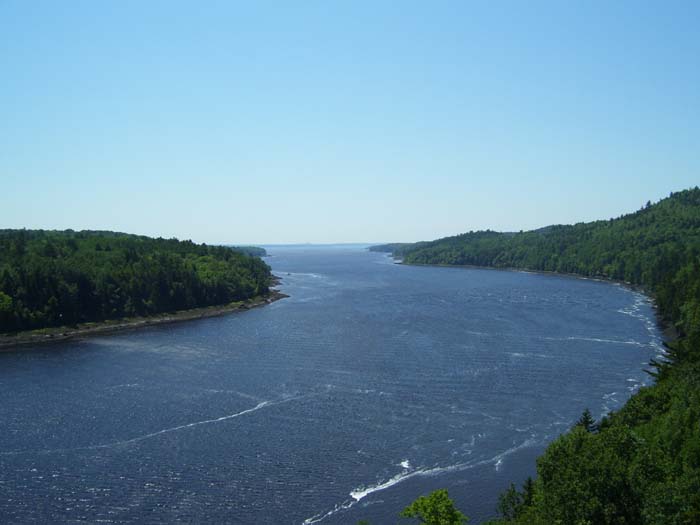 On the other side of the bridge, I turned around and came back a ways to get this clear shot of the nearby town of Bucksport. 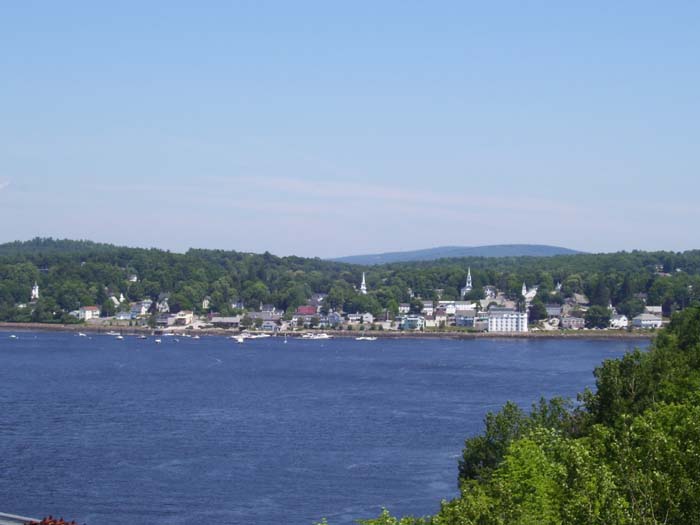 The view from the road out of town wasn't that bad, either. I didn't have to climb that entire hill there in the distance, but I did get pretty close to it. Notice that for the moment, the shoulder's not too bad. 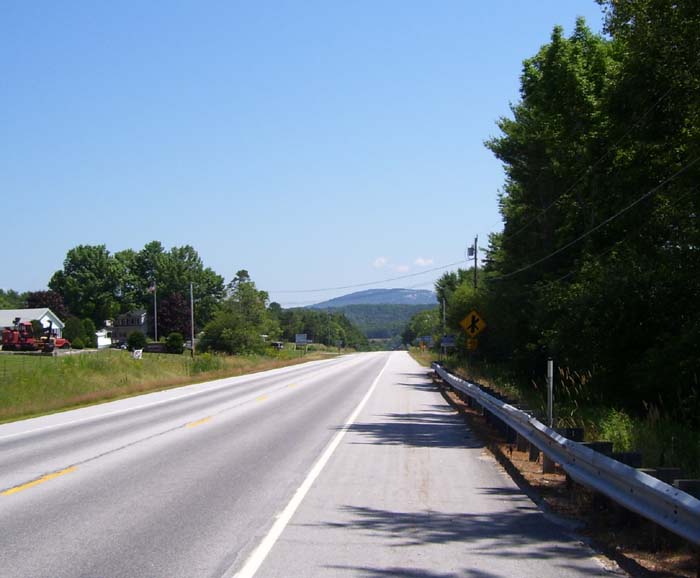 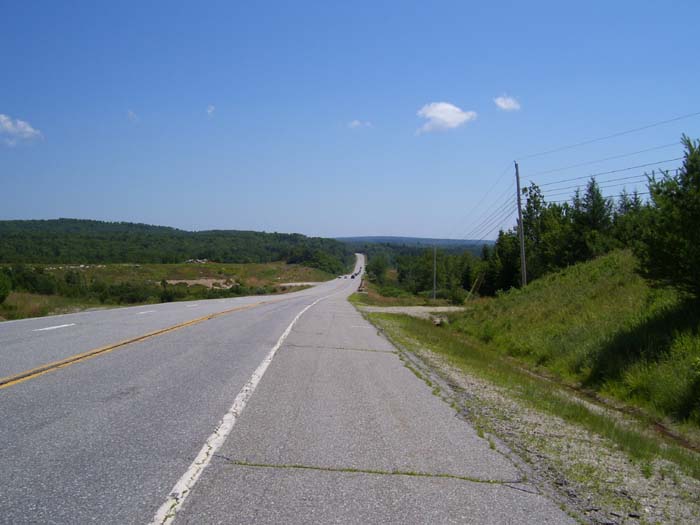 But I suppose I shouldn't complain too much, because later it looked like this here, forcing me onto the road itself. At least traffic was light, I guess. And yeah, that's a real nasty hill coming up, too. Makes my legs hurt just looking at it. 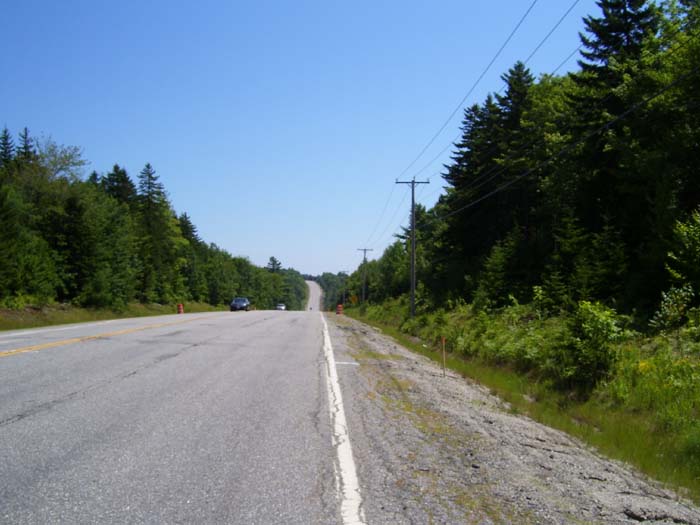 This was the largest town of the day, downtown Ellsworth, a typically crowded place with steep hills running in and out (I descended very sharply on my way there, and got to enjoy the reverse on the way out). On the other side of town, I found a McDonalds and refreshed my lemonade, probably the last fast food joint I'll see this tour. 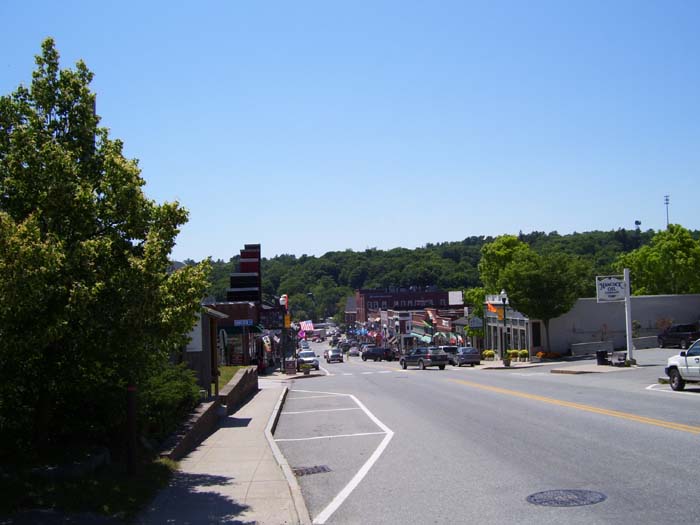 After Ellsworth the shoulder got much better, but the hills kept right on going. 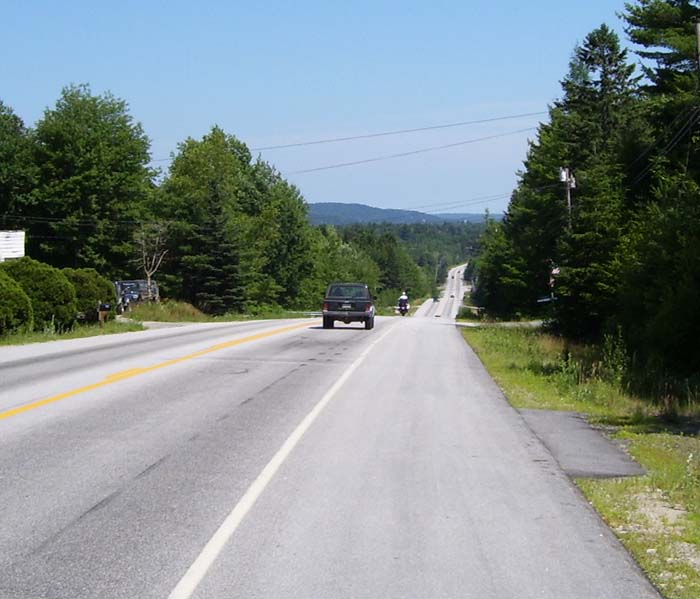 The scenery all around was pretty nice, though. 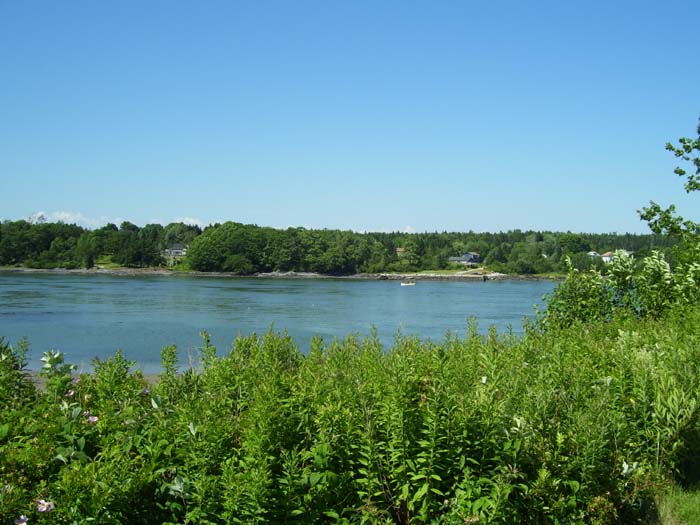 More of the same, from a bridge between Hancock and Sullivan. There was a rest stop there, at the bridge entrance, where little placards explained the area's history and the various attempts to build bridges over this river. That gap you see below, between those clumps of trees, is well known for its nasty currents and tendency to form a kind of reverse waterfall if the tides are right. This makes boating up and down the river very difficult, as you might imagine. Back when the automobile was starting to get popular, this area was known for granite production (for use in curbs, and so forth). A lot of people made big fortunes back in those days. 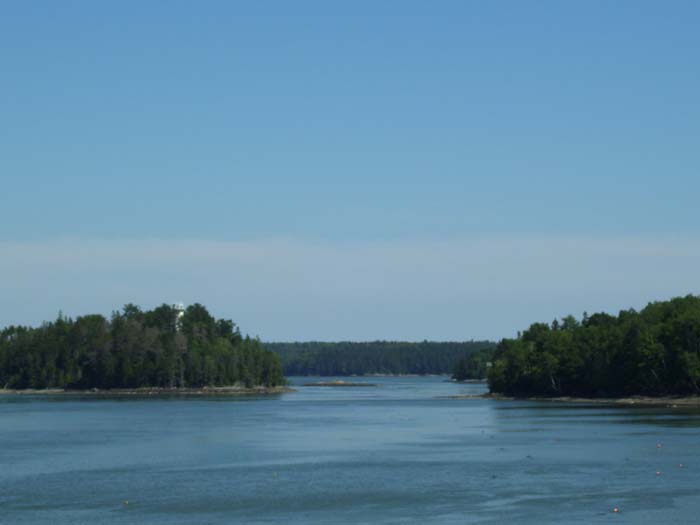 More scenic views from a bit further on. Most of the time the trees blocked my view, so I was grateful for any water sighting. 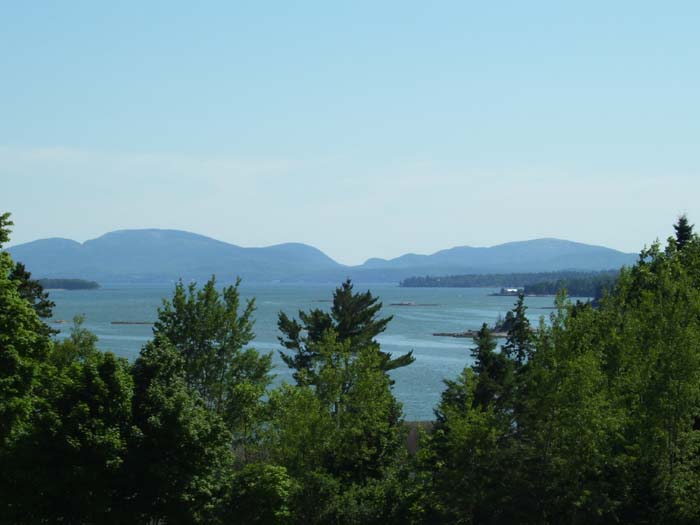 Here's a shot from one of the few times the road actually ran right along the water's edge. 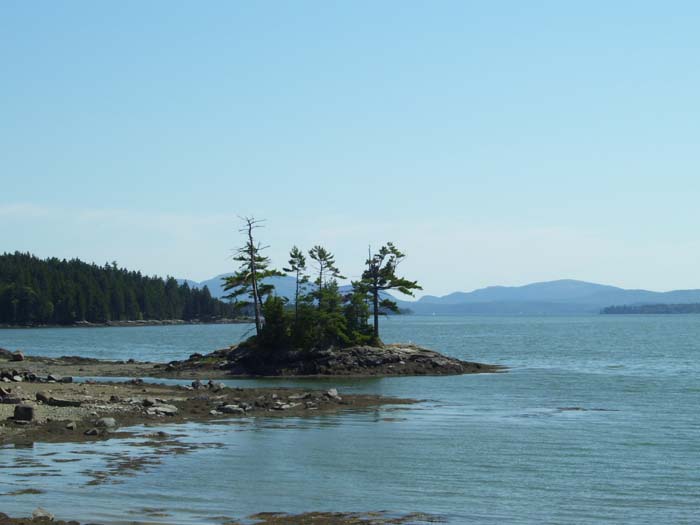 Close to the end of the day, I spotted this scene off to my left. 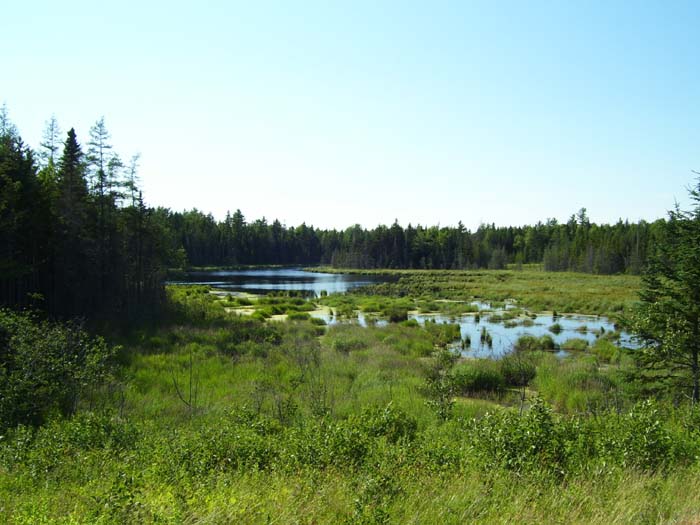 A few miles later the south wind pushed me right into Milbridge, my destination for the day, where I say goodbye to US-1 and turn right on 1A for the final leg of my trip tomorrow. Oh, and see that sign on the very left ofthe frame, the one that says "Red Barn"? That's my hotel for tonight (and only $50, too). So I'm staying right where the road splits. 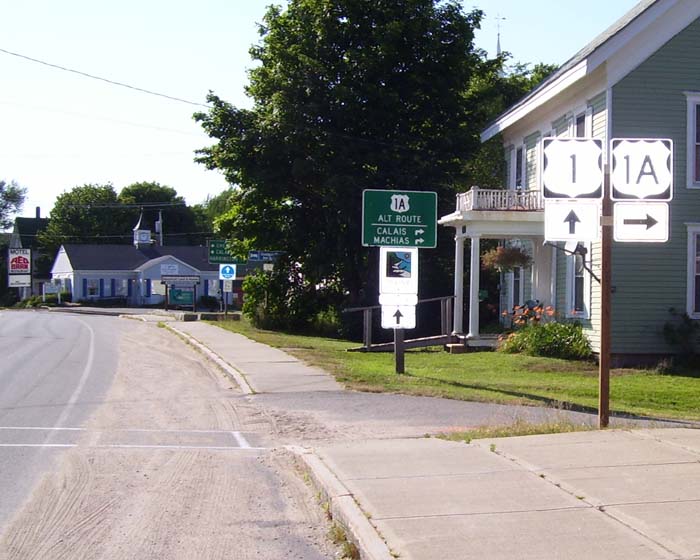 This is the view out the back of my hotel. Not a bad way to end my last night on the road. 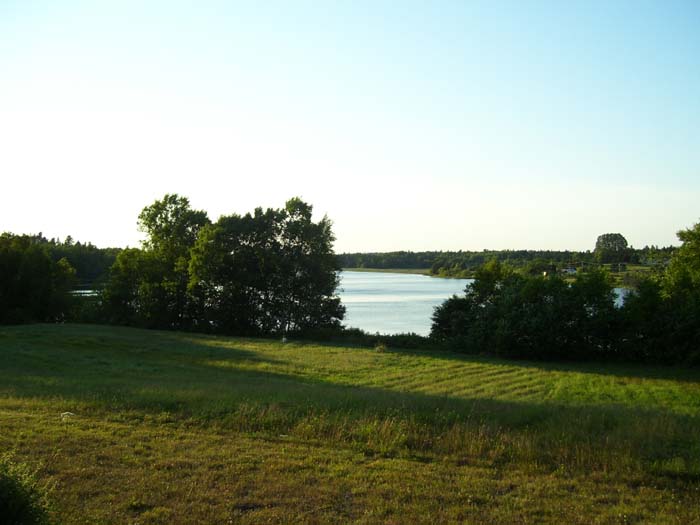 Also, I decided to finally try a local treat, the infamous lobster roll. The local take-out place had a special, two rolls and fries for $15, which sounded like a pretty good deal. Here's what the plate looks like. While tasty, the lobster rolls turned out to not be very filling, so I had to go back and buy a calzone for dessert. 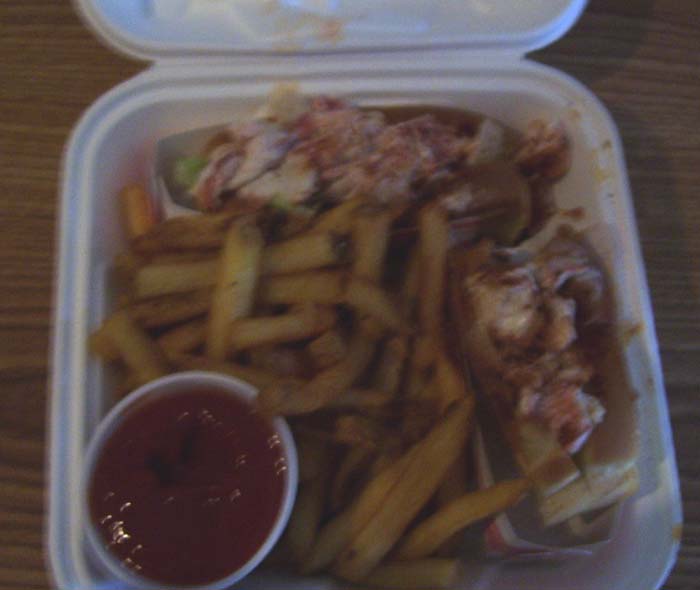 This was the only hotel in town (the rest are all B&Bs) so I was happy to get a room here (I made a reservation last night, just to be sure). The place is completely full, too, so it's a good thing I did that. Now to relax and let my legs recover for the home stretch tomorrow.