The weather forecast warned me about today, but it's one thing to read about it and another to wake up and look out your window to rainy skies and wet ground, and know you have to go out in that. It took a while to get moving this morning, that's for sure. I set my sights on the small town of Hawkins about 65 miles away, with Gladewater an unlikely longer choice, and Longview the extreme long shot for the day. Obviously, as you can see from the headers on this page, I went with the second option.

The other weather issue today would be the 10mph northeast winds (I just can't seem to shake the easterly winds for some reason), which I expected to harass me constantly like last time, but almost immediately upon setting out, it became apparent they weren't that much of a bother. I think it's because I've finally entered an area with trees, and they did a decent job of blocking out the light winds. In fact, except for a few areas of more open space, I barely noticed the wind at all today. I hope that holds up because it's going to be more northeast winds for the next couple of days, it appears.

Also, once I finally got started, the rain dropped to a light drizzle, just enough to keep the roads moist and little else. Even the passing trucks didn't kick up all that much spray. The main problem I had was that stupid coarse road surface I keep whining about, which lasted most of the day today. Here's an early photo showing what I'm talking about, with the road still wet but no standing water. The shoulder was so rough and annoying that I mostly just stayed on the white line (traffic was super light on this road, what with I-20 paralleling it just a couple miles south) and drivers just avoided me. Except for the rare instances where the shoulder got smooth for a few miles, I maintained this strategy all day, even in heavy downpours. 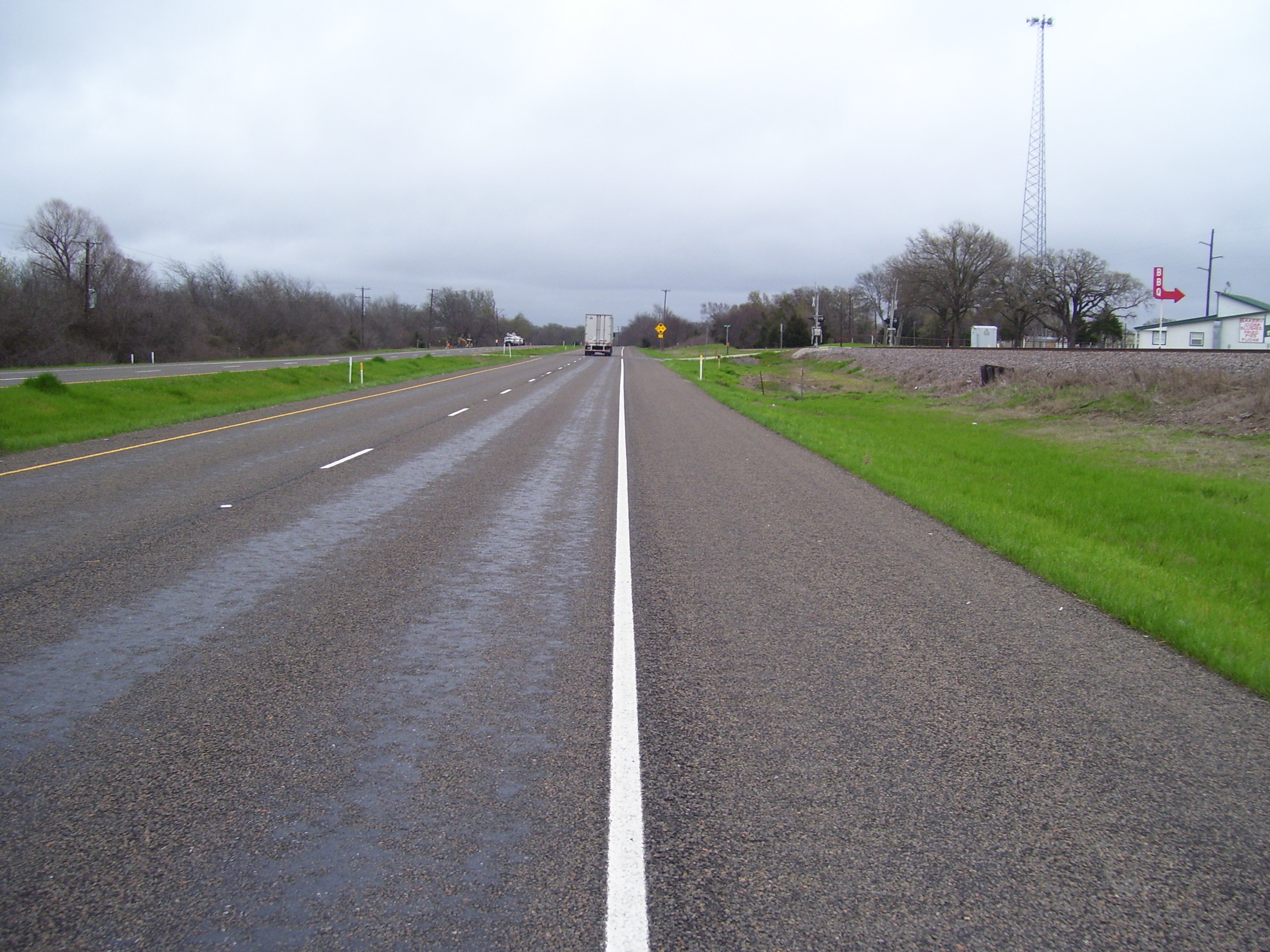 Cattle were everywhere, so much so that taking a photo of them seems kind of boring and pointless. I will, however, challenge you to pick out the one thing from this picture that doesn't quite belong. I think someone has infiltrated the herd! 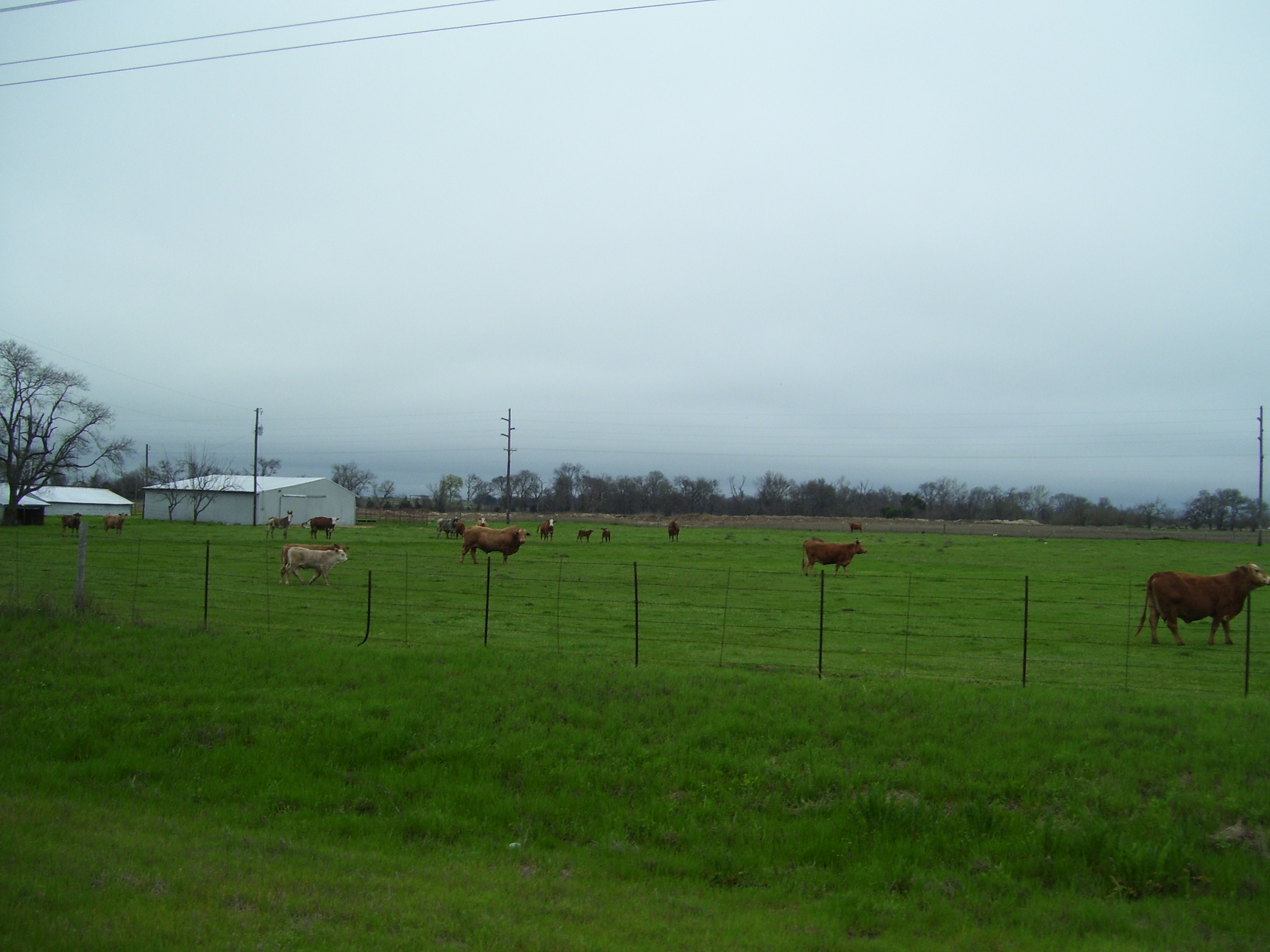 On many occasions going through small towns I've come upon veterans memorials and monuments, usually some plaques and a flag. This one, in the town of Wills Point, had an actual howitzer. 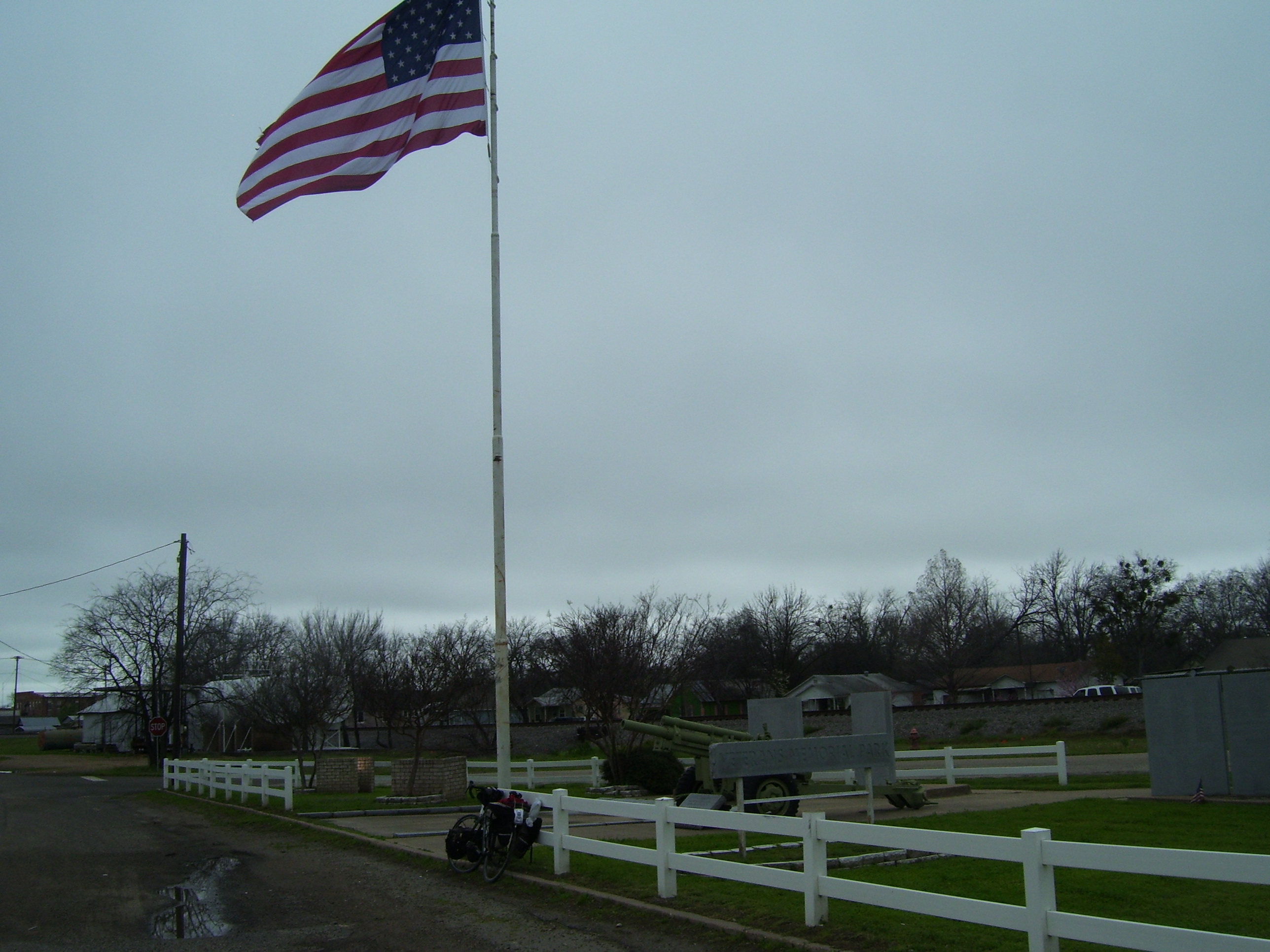 This is also the third or fourth time I've seen one of these places. I guess if the town's too small for a full-sized Wal-Mart, they'll bring in one of these miniature versions. Just another way Wal-Mart is taking over everything, I guess... 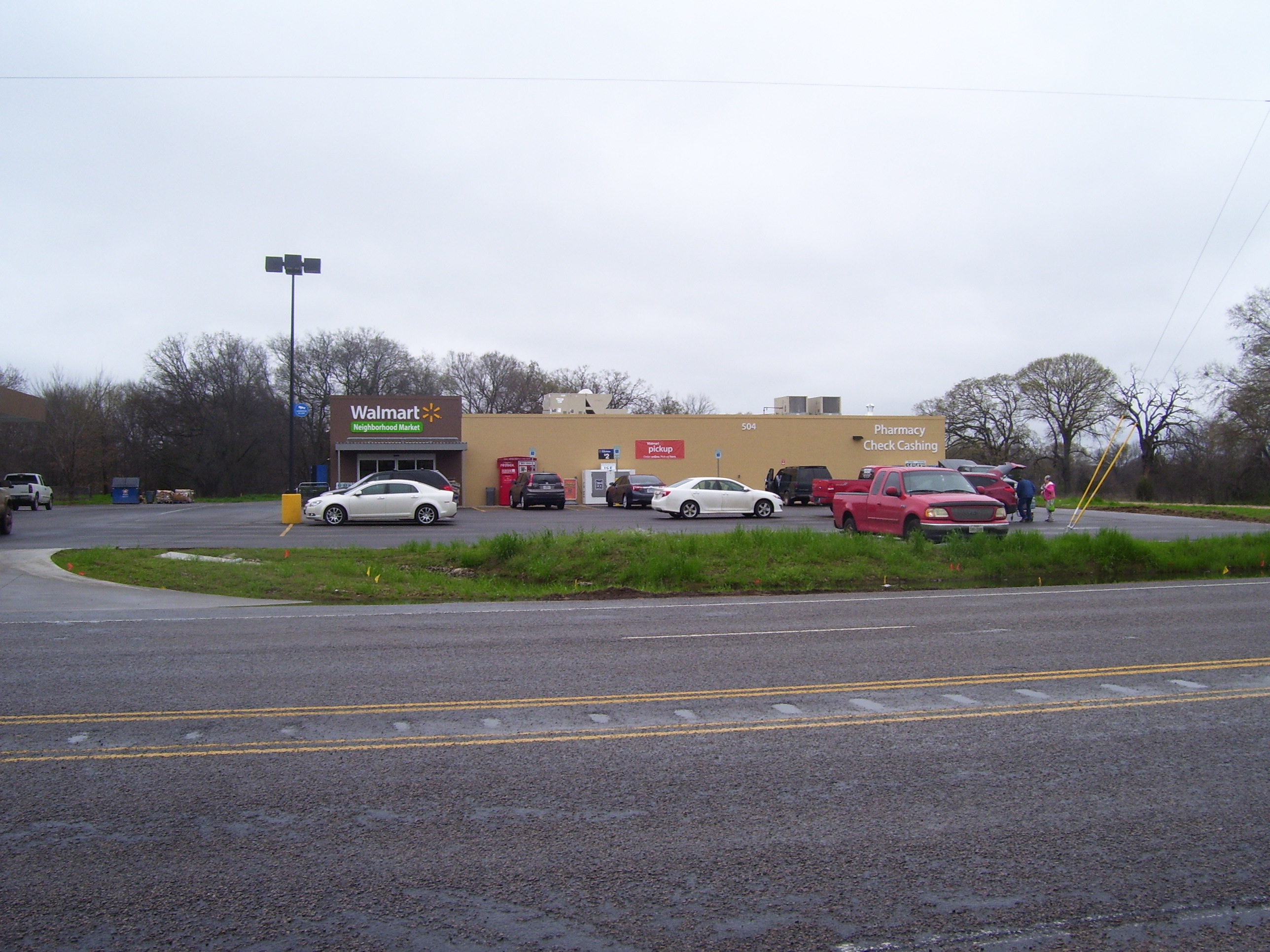 About halfway through the day's ride I came to the one really interesting site for today's touring, the town of Grand Saline, which is famous for its massive salt mine. Here's a gigantic chunk of salt so big I can lean my bike against it. (Yes, it does gradually deteriorate in the elements. Apparently they replace this thing every few years.) 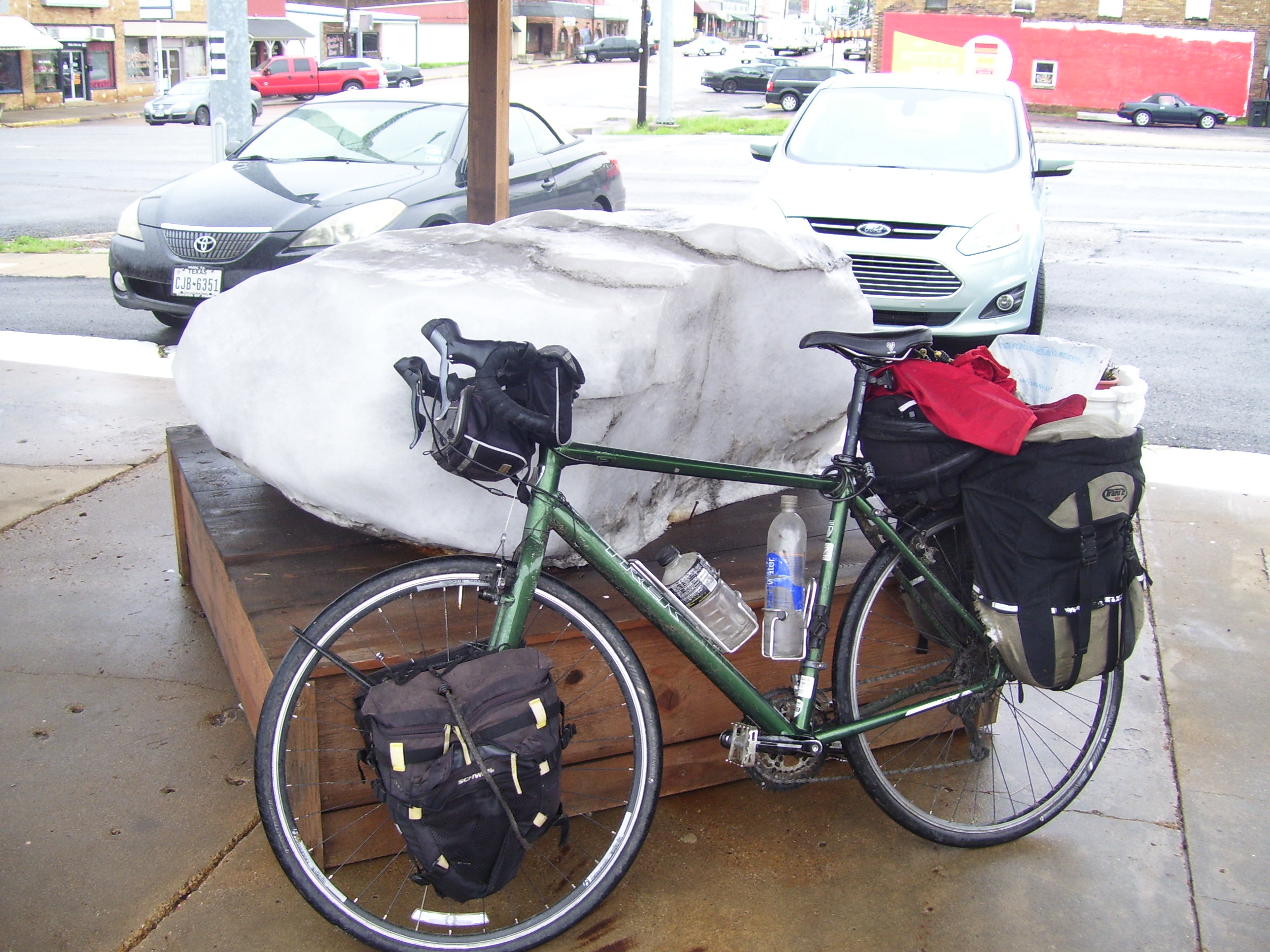 Next to that is the Salt Palace, a small (free) museum and visitor's center with walls made entirely out of blocks of salt. Again, this is something that has to be replaced occasionally, but I guess they don't mind too much. Who else can say they go to work every day in a salt building? 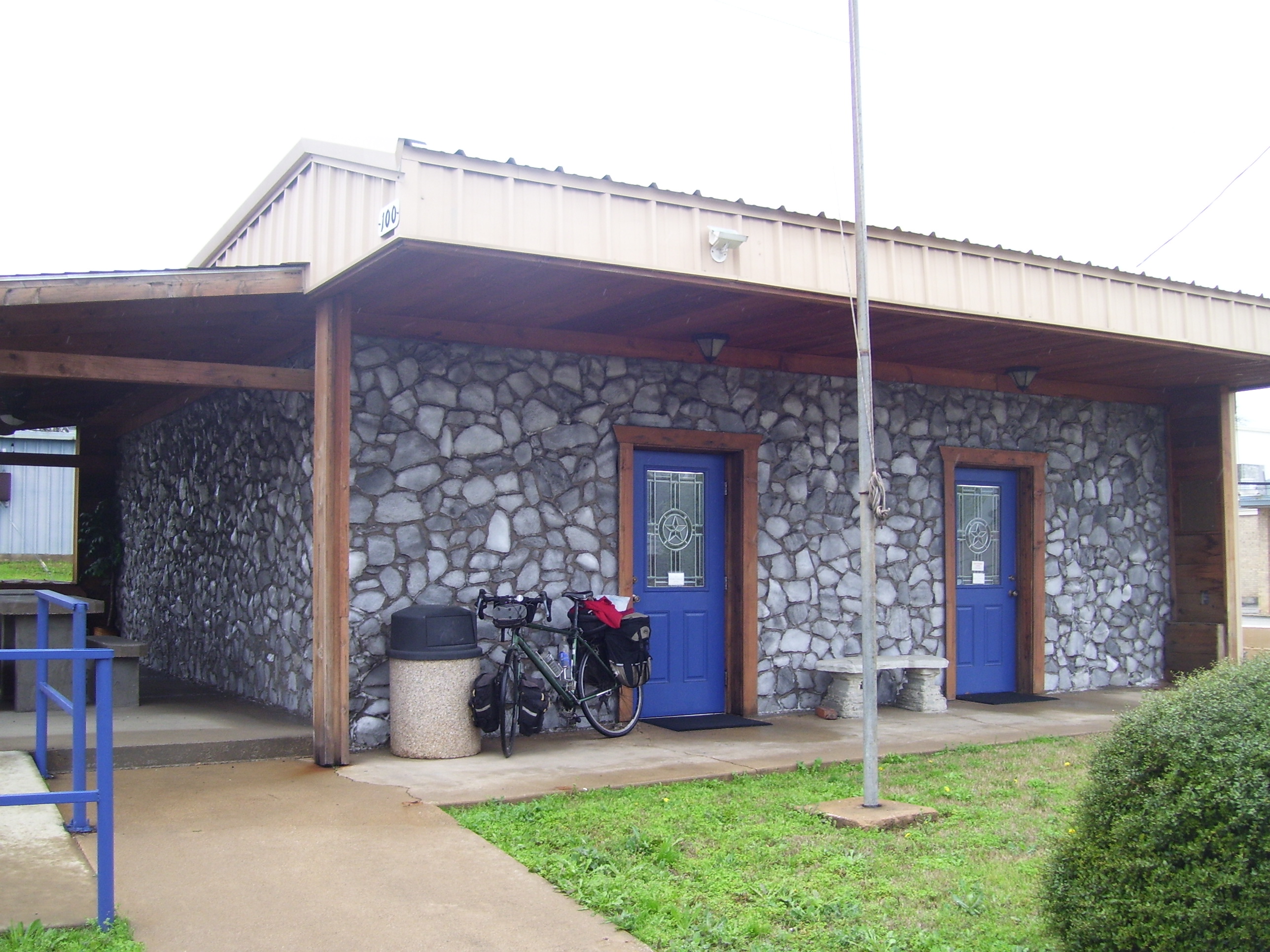 Apparently one thing tourists are encouraged to do is lick the walls. And you know what? It tastes just like salt. 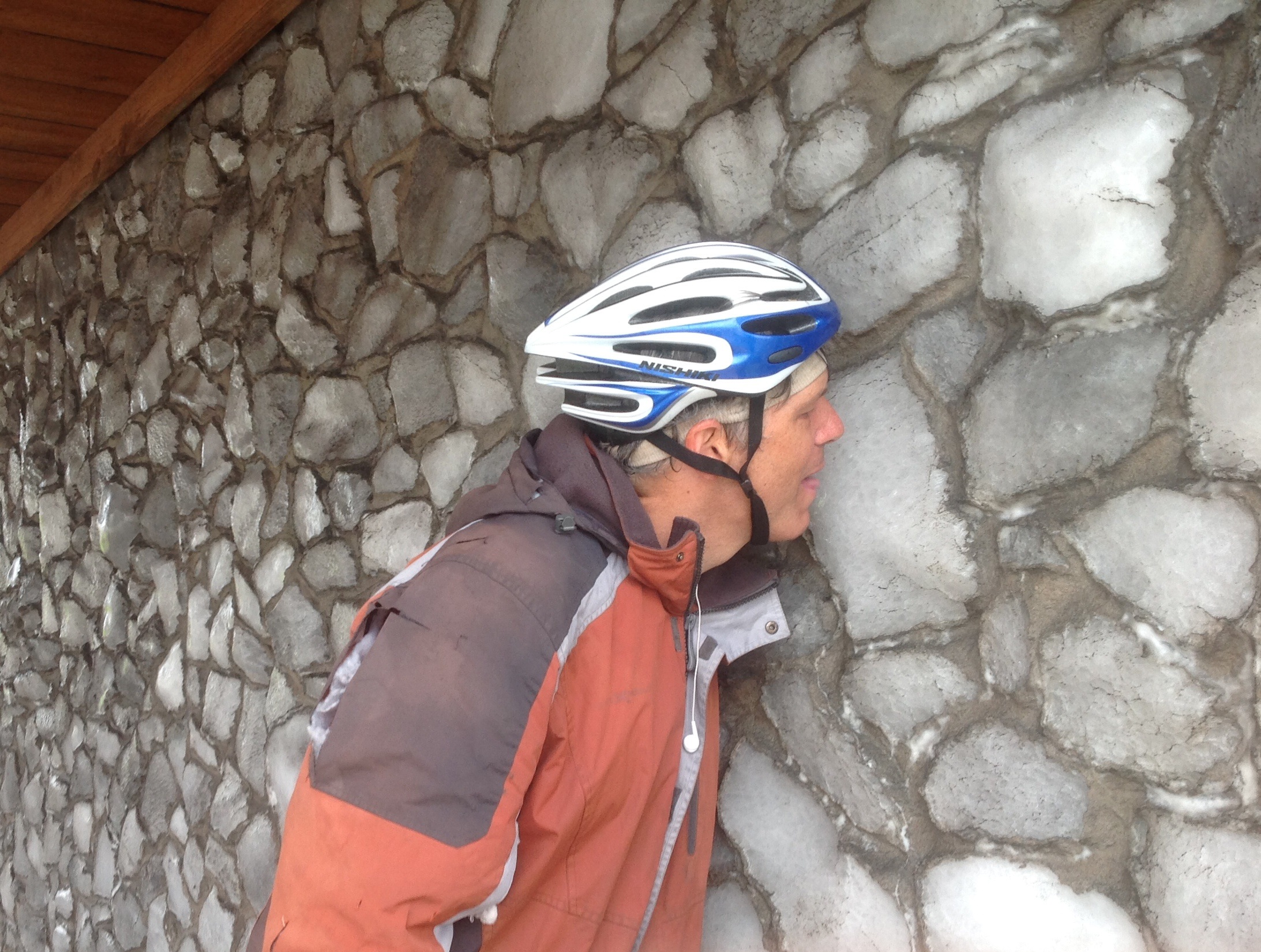 Before you get all grossed out (too late, probably) let me point out what the museum worker told me...salt is deadly to germs, so the wall is actually pretty sterile. You really can't get sick from licking it, although, I suppose, if you stood there all day trying to lick your way through to the other side, you might hurt yourself.

After touring the tiny museum (and getting my souvenir chunk of salt) I rode down the road about a mile to check out the factory. Not much to see...it's barely visible in the back of this selfie. From what I was told, though, the salt mine is so huge and has so much salt in it, that every other salt producing facility in the USA could shut down, and this one place could supply the entire country with all the salt we need for the next several thousand years. 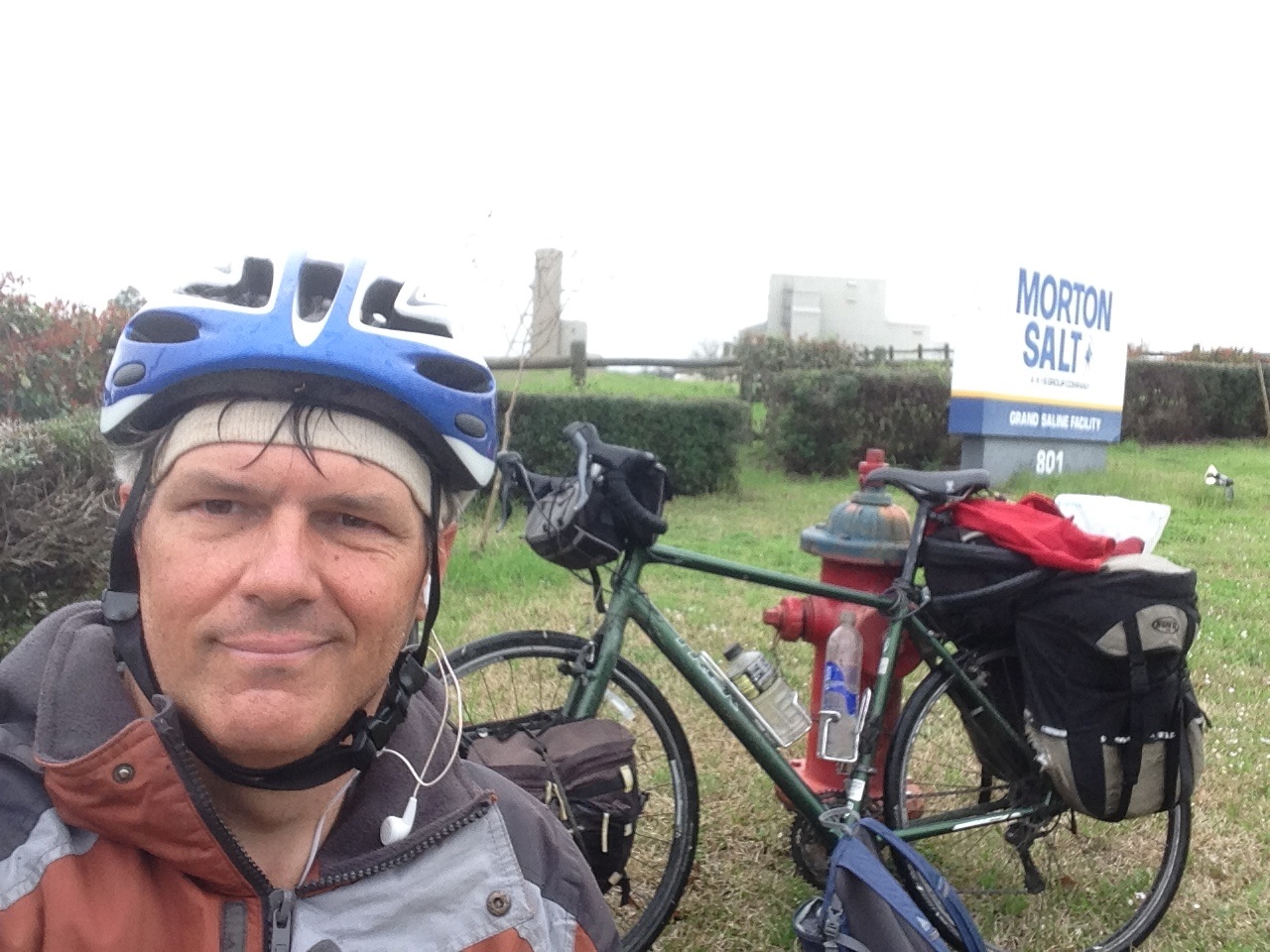 There's a lot more to that factory, by the way, such as the unique design of the mine itself, and the way it's carved out in such a way that whole rooms are left inside that you could walk around in...check out the Grand Saline wikipedia page, or other online resources, for more info if you're interested.

I had lunch at a little cafe across the street, then moved on during a lull in the rain. Here's today's random historical marker: 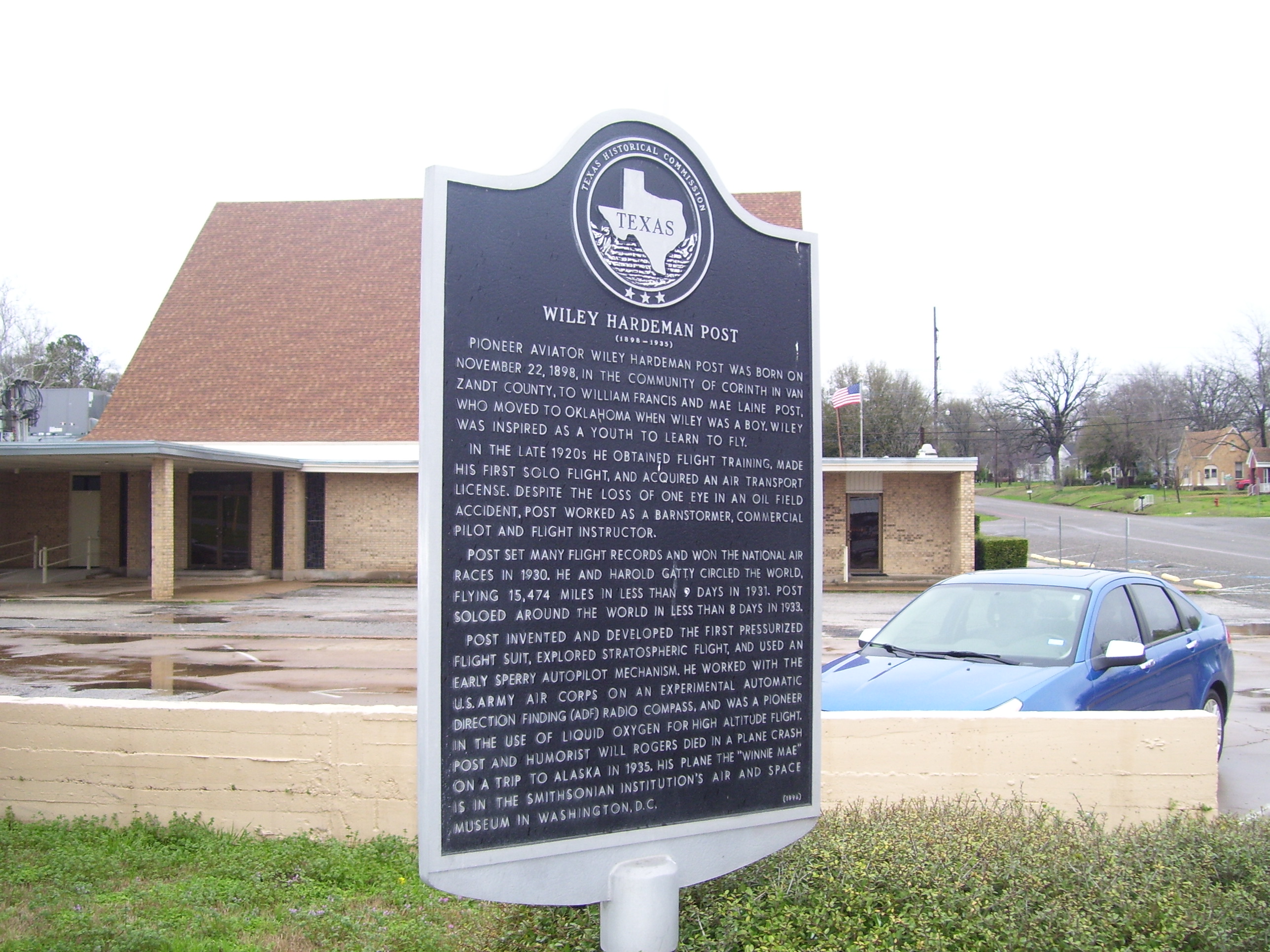 The rain came and went for the next couple of hours. As I rode on I could see lots of areas that were flooded out, kind of like this one here, making me glad I stuck to major roads today...I bet many of the smaller side roads were impassible. 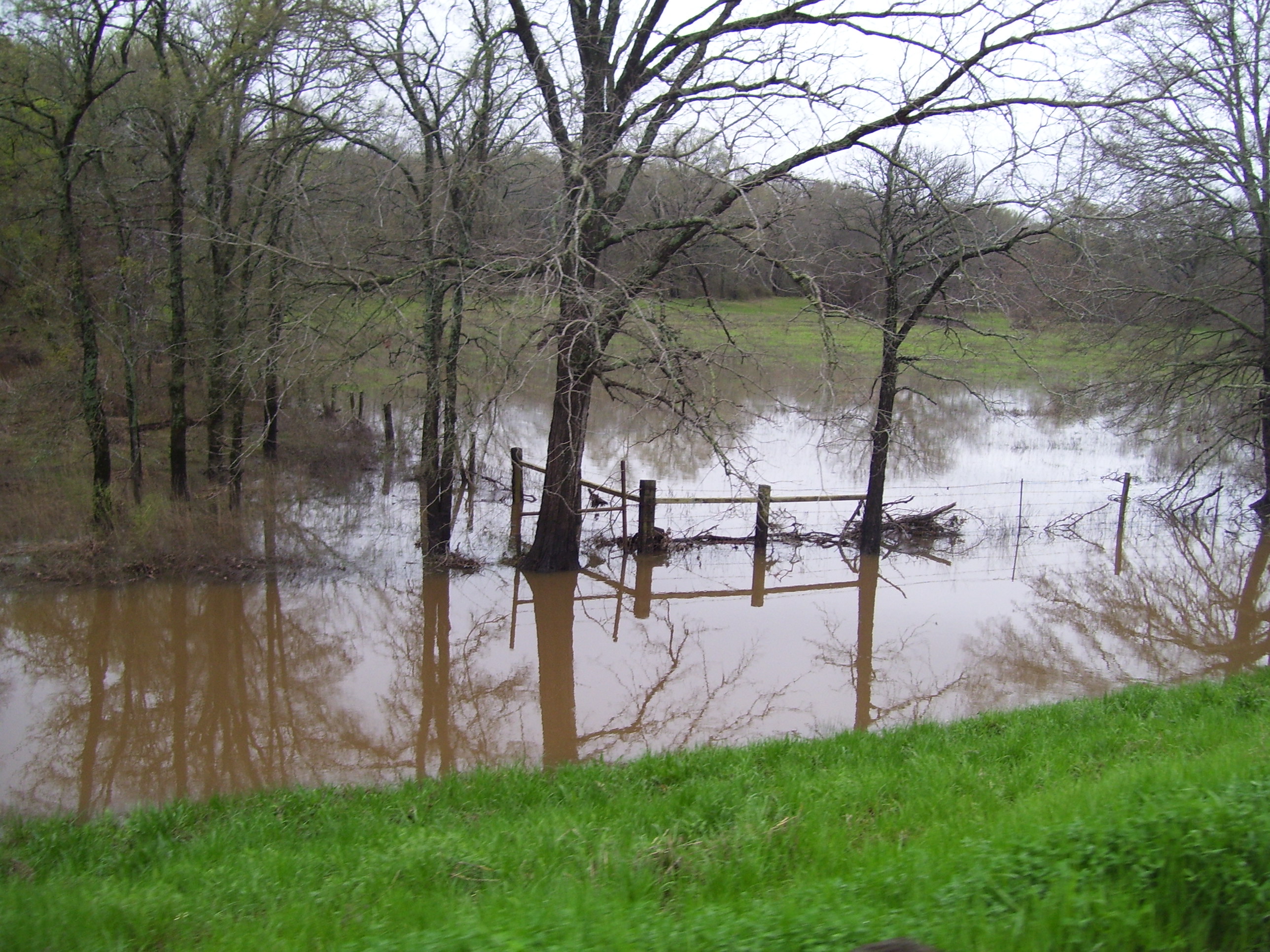 Shortly after 2pm it started raining harder and I got a steady diet of this for the rest of the afternoon. In fact, several times I heard thunder as well, but never saw any lightning flashes. A few times the rain really got strong, too, but that never lasted. Mostly it was just a steady downpour. 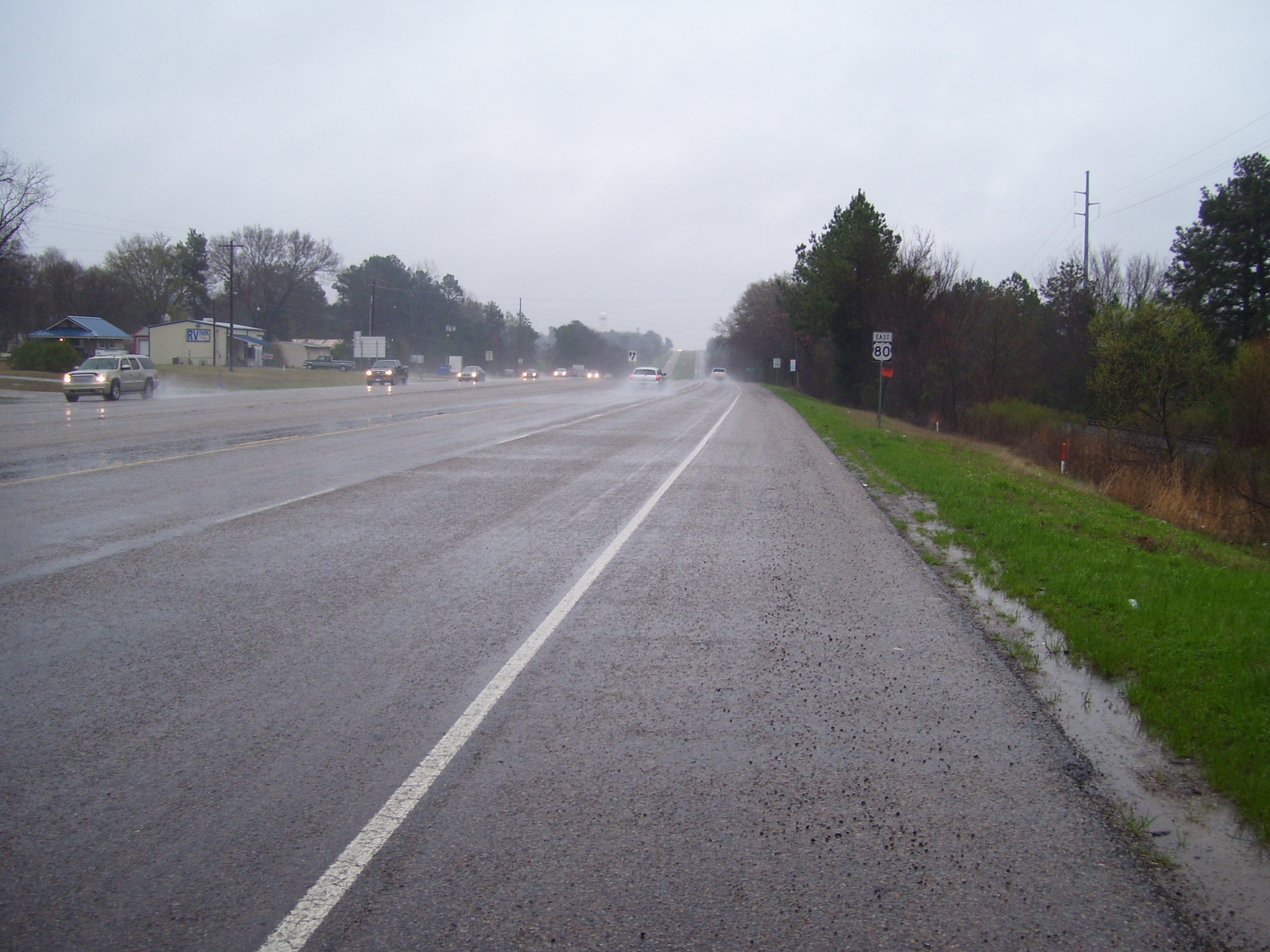 I took a break at one of those picnic areas, but unfortunately had no cover. The rain became off-and-on for a while, and finally stopped about 5pm for maybe an hour. 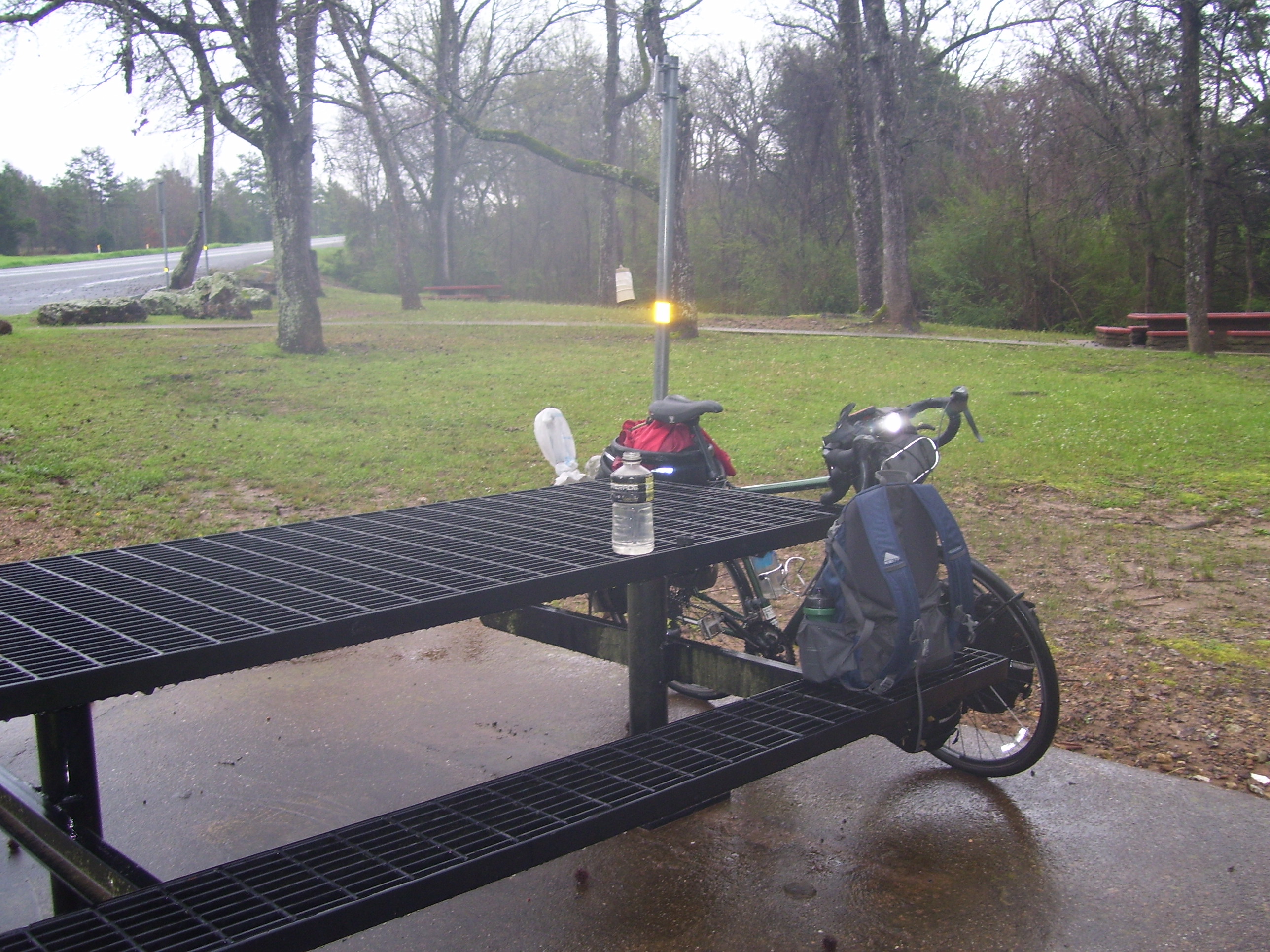 At about 5:30 I got to my first stopping option, but with the rain temporarily halted, winds not an issue, and Gladewater only 15 miles away, I decided to press on. I went through the town of Big Sandy, which had another example of the classic western storefronts downtown (and all closed since it was after hours on a Friday): 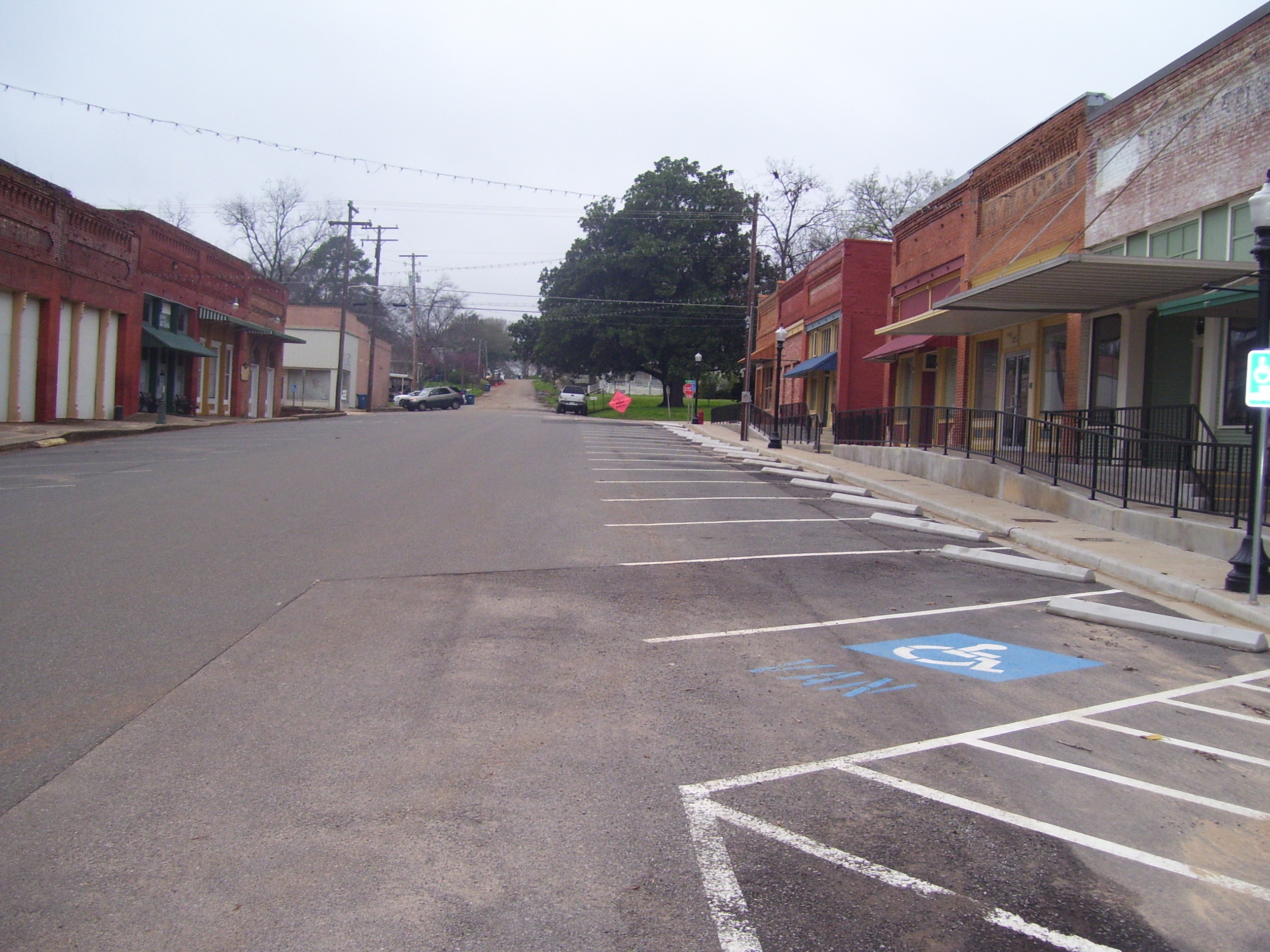 The rain resumed shortly after this photo and kept up for the rest of the ride, so when I arrived I was totally wet through. The plastic bags I used for the computer only barely worked, so I need to come up with another solution for that since tomorrow it's expected to rain all day. My clothes were dry in the panniers, though, so holding onto all the plastic bags I've collected from store visits this trip certainly paid off. I'm currently cycling my wet biking gear through stints in front of the hotel room heater, but even so, they're just going to be totally soaked again within the first hour tomorrow. I really ought to take the day off...but no, I'll go out in it, I'm just not sure how far I'll get. The Louisiana border is within striking distance, so I'll set my sights on that and see what happens.