Pre-Ride Comments from Agent One

Naturally, the first thing everyone wants to know is, "Am I crazy?" Well, I must be a little bit nuts if I'm going to try something like this, right?

I've actually been dreaming about such a ride for about 10 years, ever since the first day I biked a couple of miles over to pick up the mail from my PO box. Since then I've exceeded at least 10,000 miles of bicycling, including over 3,000 last year alone, and not counting a couple thousand on a recumbent. (Eventually I realized that 6'2", 240# is too much for that particular bike to support over the long haul, and switched back to a standard upright.)

During the last four years (which is when I really got serious about this), I've biked from Milwaukee to Dayton twice (400+ miles in 4 days each time) - in August - plus taken on numerous smaller multi-day trips. In the process, I managed to annoy most of my co-workers by insisting on bringing the bike to conventions as part of my ongoing effort to bike in every state of the USA ("biking" being defined as at least 10 miles at a time during a real visit to the area, not just hopping out at a rest stop while driving through - and also while riding MY bike, not a rental or loaner). So far, I have Ohio, Kentucky, Michigan, Wisconsin, Indiana, Illinois, New York, Connecticut, Massachusetts, Virginia, Florida, and Georgia, plus England for bonus credit. During the Bikeabout, I'll pick up several more states (Washington, Idaho, Montana, North Dakota, Vermont, New Hampshire, and Maine, hopefully, plus bonus provinces of Ontario and Quebec) - basically covering the entire north and finishing off most of New England. Taking care of Hawaii and Alaska are going to be interesting challenges.

Some have asked me what kind of bike I'm taking on a trip like this. Well, it's up to you, but I prefer hybrids, which are basically touring bikes with mountain bike handlebars. My lower back can't stand the bent over position of a road bike, but hybrids work out fine. The one I'm riding this time is a Trek 7300. To tow all the gear I need, especially for those nights where a hotel can't be found, I have a BOB YAK trailer (www.bobgear.com), which I highly recommend (while it looks unwieldy, the thing tracks the rear wheel perfectly, so it's amazingly easy to control). Here are a couple of photos, complete with tags listing all the junk you have to have to stay on the road for 40-plus days. 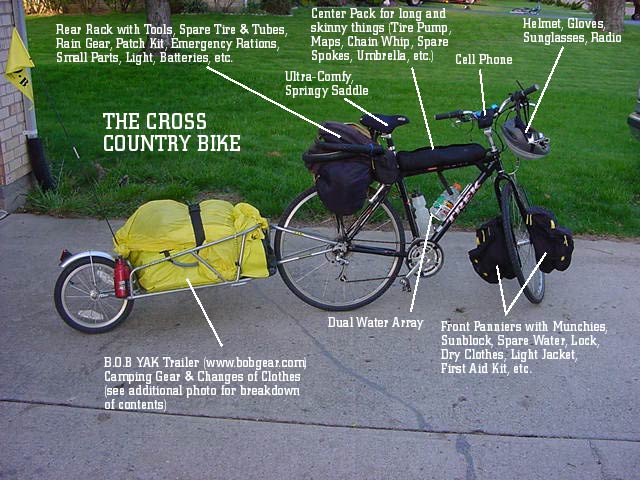 Now, some of you have probably seen gear like this before, but the #1 question I get from people when I'm riding is, "What the heck is that long, flat thing on the top tube?" Actually, it's a BagJob, a refugee from my BikeE Recumbent bike that isn't really designed for upright types. It's long enough for the extra-power air pump I carry, though, and protects it from the elements, so I attached it to the Trek using its built-in Velcro straps. After a while, I started putting other long, skinny things in it for storage, like a chain whip (this is a tool to remove the freewheel so you can change broken spokes, of which I have my annoying share), crescent wrench, umbrella, maps, and a batch of spare spokes. Without the BagJob, I'd have real trouble figuring out where to put all that stuff. If you want to know more about the BagJob, visit this site. 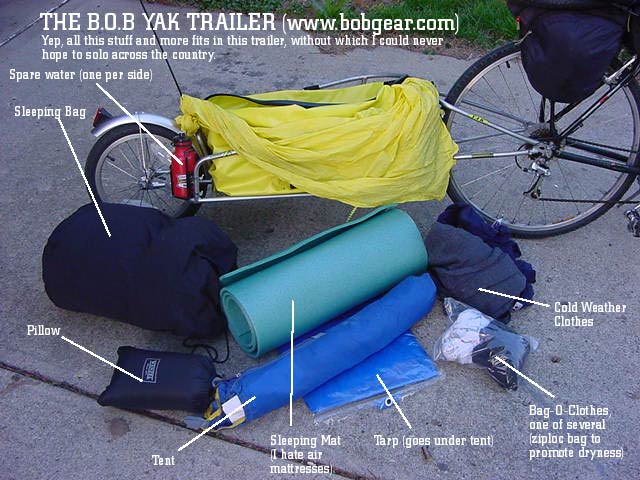 While I'd rather stay in a hotel every night, I know from experience this won't be possible, so camping gear is a necessity. The above is actually the minimum I need to pull this trip off. The final packed trailer will also include about 4 more bags of dry clothes, plus a couple bags of food, in case they don't have McDonald's in Montana. The top of the trailer bag (the yellow thing) won't close with all this stuff packed in it, so the tarp will wind up wrapped around it to keep everything dry. As I learned recently, you also really need a tarp under a tent so water doesn't seep under you when it rains. So, the tarp serves a dual purpose.

As to getting all this junk to Seattle, everything but the bike is already on its way. The bike goes in a special transport box and goes along on the plane. I won't trust it to UPS or another freight company, and really am not comfortable with the airline baggage handlers either, but they got it to and from England okay, so a trip to the west coast shouldn't be too bad.