This morning I awoke and checked the cyclist's best friend on the road, the Weather Channel, to see what the day looked like. It sounded perfect - already 59 degrees with a high of 75, clear and sunny, with a northwest wind 10-20 mph turning southwest in the afternoon. Route 2 took me east and southeast today, so it looked like I might have a shot at reaching Grand Forks, over 140 miles away, and almost at the Minnesota border.

Unfortunately, the forecast turned out to be wrong. As soon as I walked out the door I knew I was in for trouble. That "northwest" wind was actually coming from the northeast, and for a bicyclist going east, the difference between a northwest and a northeast wind is the difference between an easy cruise and a grueling battle. Instead of the 14-15mph pace I was hoping for, I set off at 10mph and hoped this was a fluke wind that would soon turn to the "correct" northwest direction.

Needless to say, it didn't. In fact, it slowly turned to the east and eventually to the southeast, so that when I started my SE run towards Devils Lake it was right in my face. So, insead of a northwest wind turning southwest, I had the opposite, a northeast wind turning southeast. Someone in the forecasting department mixed up their wests and easts, obviously. Local radio channels had it wrong too, so it must have been a conspiracy.

The result was that by the time I reached Lakota, which had the last hotel before Grand Forks (60 more miles away), it was almost 7pm. I ended my cycling day after riding 86 miles in 10 hours, including about 4 breaks and almost an hour for lunch and a much needed rest. This was definitely not my best day of riding, but I guess after all those easy days with a tailwind, I'm entitled to the occasional tough day. As long as it doesn't become a habit. (Tomorrow the forecast is for a 25-30 mph northwest wind. If that's as northwest as today's wind, I'll be in real trouble.)

As for photos today, I saw nothing interesting out there (just more plains, wetlands and farms). At one point a truck did turn around in front of me and pull over, after which the driver got out, ran into the median, and picked up a plastic bag that had obviously blown out of the truck. However, I was so stunned by this amazing sight (when was the last time you saw someone go back to get some trash that had blown out of their vehicle?) I didn't think to get out the camera until it was over.

So, the only picture I have is this one. Let me explain: I wear padded cycling gloves to avoid pinching the nerves in my palms (and I still have to move the hands around a lot to avoid numbness). After a couple of weeks of riding, the sun has tanned everything the gloves don't cover, giving my hands this ludicrous look. The brown spot is particularly amusing and is a real eyecatcher when I'm not riding. People who see me without the gloves usually think I'm diseased or something. 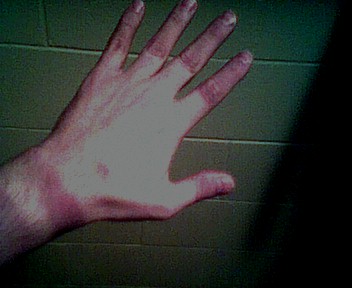 The white line on the wrist is from my watch, by the way.