Today's forecast was grim - highs around 50, lots of rain, and windy. Fortunately the wind came out of the northwest, making things a bit easier. But I didn't know that (there was no weather channel forecast in my hotel) and getting motivated to get on the road today was tough. I didn't leave until after 9:30, my latest start of the trip so far.

To stay warm I wore the cold-weather gear I used during my trip over the Pass, and once I got going it wasn't so bad. I had my feet wrapped in plastic bags (under the shoes) to keep the wind and rain off them, and this little trick worked like a charm, though I'm sure I looked strange with plastic sticking out around my socks.

While the rain mostly stayed away, I was unfortunately plagued with mechanical problems. First was a flat on the front tire (caused by a chunk of glass that managed to bypass the tire liner - I also found two other pieces of glass imbedded in the tire that the liner had stopped). Then, I lost the screw that held the clip plate on my pedal, causing the plate to fall off. I didn't notice this until after I'd left my break spot (at a gas station) and had to go back to find the plate. A quick trip to a hardware store got me two replacement screws and I was on my way (fortunately this problem cropped up virtually next to the shop). Finally, not five miles later, I got yet another flat, this time on the back tire. A huge piece of metal was the culprit. Normally finding the cause of a flat can be difficult, but this time it was painfully obvious - the metal rod was sticking out of the sidewall. I'm still trying to figure out how it managed to drive itself through the side of my tire like that. Anyway, fortunately for me the rains didn't start until after these problems. Changing a flat in the rain is no fun.

As for photos, I did see a few interesting things today. The first was the Big Fish Restaurant near Cass Lake, which looks something like this: 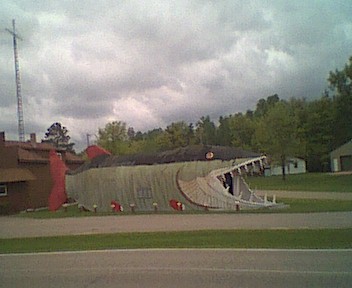 When they say Big Fish, they aren't joking. I've also started moving back into forested areas, a welcome change from the plains. This shot is of my surroundings while passing through the Chippewa National Forest: 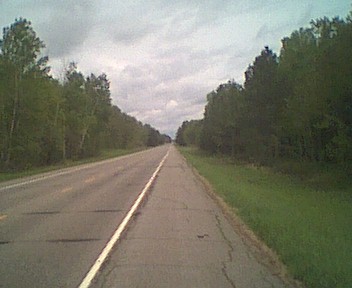 I crossed many rivers and streams today, but this one was different. I expected it to be somewhat larger, but I guess even the mightiest rivers have to start small somewhere. It was little more than a fairly wide stream at this point. I later found out I was actually passing through the headwaters, which, to be honest, weren't all that impressive. 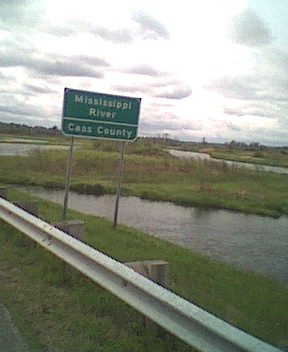 Anyhow, tomorrow looks to be more of the same weather (cold, wet and windy). I'm hoping to get through Duluth and into Wisconsin, but we'll see what happens.