Another lovely day of rain, cold, wind and hills. There was a slight improvement, however, in that the temperature actually broke 50F degrees, and instead of raining all day it just rained part of it. I tell you, this is really my worst nightmare come to pass. I plod along at 8-10 miles per hour, glancing down every few minutes to see if I've completed another mile yet and counting down the distance to the day's finish. It's not the cold, or the rain, or even the hills. It's the wind. Fighting a 15-20mph wind is like climbing an endless steep grade that you know you'll never crest. All I can do is hope the direction changes tomorrow (though it doesn't look like it will).

Along the way I did stop at a couple of scenic spots, mostly as an excuse to take a break and a long drink of water. Here's a shot from one of those locations. Mostly trees, but beyond them are some islands on Lake Superior called the Apostle Islands. Unfortunately, they're only barely visible in this shot. 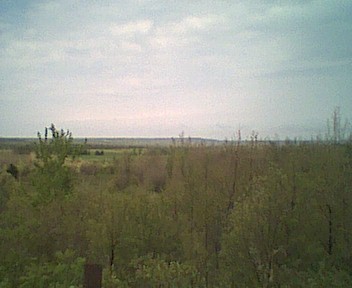 Shortly after taking this picture I moved on into my next state: 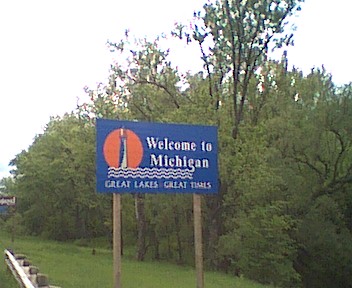 About an hour later, I moved into Eastern time. There was this little sign in the middle of nowhere (on a county border) letting me know it was time to change my watch. I stopped in Bergland about a half hour later, so I'm virtually sleeping on the time zone boundary tonight (it's only a few miles away).

Today also marks the end of my third week on the road. The total mileage so far is 2,043, an average of 97.3 miles per day (but that won't keep up if this wind continues). This leaves approximately 1,200 miles to go. If I continue to eke out a miserable 70 miles per day for the rest of the trip, it'll take me just over 17 more days to finish. Hopefully things will change in the weather and I'll be able to make a little better speed than that.