Question of the day: What's worse than cold, wet and wind to a cyclist? Cold, wet, wind and hills. That pretty much sums up today. The four worst things I can think of, all in the same day! Without a doubt, this was the worst day of the trip so far. For the record, the high was 45F, the winds were 15-20 mph out of the northeast, it rained most of the time, and except for a stretch of about 10 miles on the way out of Superior, I spent the day going up and down over hills. I'm still not sure how I managed to get 68 miles, but I do know it took over 8 hours, with only a single break for lunch (after which I was so cold I regretted ever stopping).

The reason for all this misery, which actually started several days ago, is a giant low pressure system over pretty much the entire Midwest. If you want to see what I'm talking about, just turn on the Weather Channel. The low pressure area actually looks like a huge, very slow hurricane with its "eye" sitting in the south of Wisconsin. It's rotating counterclockwise, which is why I have the northeast winds. A couple of days ago, as I approached the area, I was getting northwest winds, but that's history. I can probably expect winds from the east for at least a week, which will mean slow going. Incidentally, for those of you enjoying the thunderstorms in the south and east, you can blame this same weather system. The "arms" of the "hurricane" are sweeping across those areas right now. Until the thing disperses or moves on, I'm in for miserable weather.

Some have asked why I don't just take a day or two off and wait for the weather to pass. Well, it's not going to pass any time soon. If I wait a day, and the weather's the same or worse the next day, do I sit around again? What about the day after that? How about a week later? At that rate I'll never finish this journey, will I? It's better to do 40 or 50 or 60 miles and quit, and at least make progress, than to put up a big zero. Zero doesn't get me closer to the finish. So I press on. At least it isn't snowing, I tell myself.

Just one photo today. Most of the ride was through forest and hills, but near the end I was riding along Lake Superior (where there was nothing to blunt the winds, by the way). This was the view I had. I'm sure if it were warmer, and not raining, and not so windy, it would probably be pretty neat. 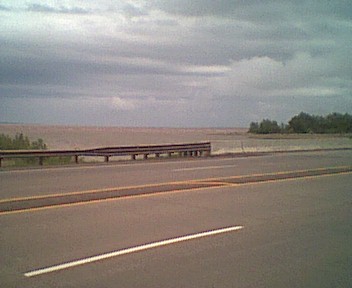