I wasn't really looking forward to today at all. The radio's weather report had warned me to expect rain and southeast winds all day (and, of course, I was going southeast). So, when morning rolled around, I was in no mood to get up. I finally dragged myself out of bed after 9 and grudgingly got ready to go. I moved out slowly, into the rain and wind, but the rain soon stopped and the winds became lodged in the trees to my right. I moved on through the rolling hills, averaging 11 or 12 mph and happy the winds weren't worse. Eventually the clouds even dispersed, and the temperature reached a balmy 20C. Along the way I enjoyed a few nice views including this hydroelectric dam: 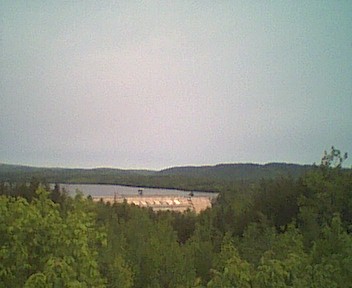 Shortly after this I turned away from the river and towards the States. I almost missed the turn onto Route 15, though. Seems it was labeled Route 29. I happened to know, however, that in about 40 miles I'd be getting on Route 29 in a town called Smith Falls. It made no sense that both 15 and 29 would start in the same general area and go to the same place. A quick check at a gas station revealed that a short while ago they renumbered the road to 29, which explained why my computer map was wrong the night before. Mystery solved, I headed down the road, grateful to finally be off Route 17 (the Trans-Canada Highway) and its endless series of trucks.

The winds got steadily stronger as I rode, but the clouds returned (the forecast was for rain beginning in the evening and running through the rest of the weekend) and the winds died out shortly after that. I reached Smith Falls at about 77 miles and a little bit after 4pm. I started looking for a hotel, figuring it would be raining soon. The only one I saw looked expensive, so I continued on. After a few minutes I started thinking I wouldn't find another place and that I should turn back, but the bike just kept going. I kept thinking there was no way I could get to Brockville today (50km away according to the sign) but the bike wouldn't turn around. It wanted to go on, so on I went. I figured I'd pay for this later with rain or winds, but they didn't come. By 7pm I was in Brockville and checking into a Days Inn after completing my longest ride since Day 17, when the bad weather and winds began.

Last night I finished off a short story I'd been cooking up in my head during this trip. It begins with a cyclist on a lonely road, but takes an unexpected turn. Here's the first installment. I'll continue with the next part tomorrow night.

Part One: The Discovery

Devon Richards studied the hill ahead and tried to ignore the oppressive heat. The sun was directly overhead, and the temperature was already in the low 90’s. With almost eighteen miles still to go before lunch, Devon knew he was in for a long day. His immediate problem, however, was the hill.

He stood up for a moment, letting his legs relax from the constant pedaling, and took a few gulps from his CamelBak. Absently, he noted that the hydration pack was now empty, and he sucked the last drop out of as he hit the leading edge of the hill. Still out of the saddle, he started climbing, letting the bike rock back and forth as he moved up the slope. His legs felt strong, so he pressed on, intent on reaching the top without having to sit and shift into a lower gear. About halfway up, the heat changed his mind and he settled back into the saddle, dropped two gears, and moved along at a slower pace.

At the top, he passed an old building with a sign marking the place as “Windy Hill” something-or-other. He needed water, so he was looking for a gas station or restaurant, and he had no idea how far away the next such store was. Richmond, Indiana, where he planned to break for lunch, was at least 15 miles ahead. Already he regretted his decision to pass through Vandalia, Ohio without stopping, but how was he to know it would get so hot in just an hour?

He wiped away the sweat from his forehead and shifted back in the saddle, resting briefly as he coasted down a slight incline. For the umpteenth time he reminded himself not to overdo it so early in the ride. He was on his way to St. Louis, still at least five days away, to spend a weekend with an old college friend. The highlight of the trip was a Cardinals doubleheader on Sunday, seven days from today. His friends all thought he was nuts biking all that way just to see a baseball game, but they just didn’t understand.

Devon loved bicycling, ever since his parents bought him his first Schwinn to help with his paper route when he was a kid. In high school, while his classmates showed off their hot rods and drove to class, he rode his bike every day, even in winter. He didn’t even own a car until he graduated from college and moved to Troy for his technical design job. Even now he only drove it when he had to, preferring to bike whenever possible. For fun, he tried to see how many days in a row he could bike-commute to work without having to drive. His record was thirty-one, a streak currently being interrupted by his two-week vacation.

After four years in Ohio he was used to hot summers, but it was only May, so he hadn’t expected or planned for today’s temperatures. His normally light skin was coated in sunscreen, particularly around his forehead and neck, which were most susceptible to damaging rays. Unfortunately, he was wearing a black shirt, and didn’t have a light-colored pair of shorts over the black Lycra riding shorts. The dark clothing was noticeably contributing to his discomfort.

He considered stopping and finding shade, but without water it was pointless. He needed to find some, and fast. Something to eat, even if just a pack of cookies, would also help. Any gas station would be able to provide these things, but he saw nothing ahead but trees and road. Wasn’t I-75 to his left somewhere? He thought about taking a side street, but not knowing the area, he could wind up at an underpass with nothing around, worse off than before. He kept going, hoping for the best.

It wasn’t forthcoming. Each curve brought more empty road and rolling hills. The climbs, while not terribly challenging, began to take their toll. Devon began to feel parched, and his lips were uncomfortably chapped. He wiped the sweat away again, shook his hands to relieve the pressure from the handlebars, and plowed ahead, determined to finish his ride.

As he sped along, he began to concentrate on the trip. St. Louis was his eventual target, so that was what he thought about. In just five days, or less if things went well, he’d be there, visiting his friend and enjoying some baseball. All he had to do was get through this ride.

Focusing on that goal, he kept his head down and his eyes on the road. The white line marking the division between traffic lane and shoulder was a convenient target for his gaze. The paint of the line was actually much smoother to ride on than the shoulder itself, so he concentrated on keeping his tires there.

Unconsciously he reached up to wipe the sweat away from his forehead once again, but there wasn’t any. Devon didn’t notice, his concentration now locked on the road and the white line. After a few minutes this was all he could see, his vision narrowing tunnel-like to just the few feet of road ahead of his bike. He had no idea that his body was starting to shut down, unable to operate without food or water. He was in big trouble, but was too locked on getting to St. Louis that he didn’t even realize it.

Then, to his surprise, the heat turned off and the wind stopped. This was enough to shake Devon out of his near-trance. Looking up, he saw nothing but gray ahead, the white line stretching towards it as if reaching into infinity. He stopped pedaling, confused, and all the complaints of his body suddenly penetrated the haze surrounding his brain. He was hungry, thirsty, hot, tired, and shaky all at once. He had to get off the bike and rest!

He pulled on the brakes.

The world shifted and he found himself slowing to a halt in front of a stoplight. A car swerved to avoid him, honking, and he instinctively dodged up onto the sidewalk next to a fountain. A stretch of shadow beckoned, and he somehow managed to get off the bike and into the shade. The bicycle fell over, forgotten, as he all but collapsed onto the sidewalk, breathing heavily. Sweat suddenly began to pour out of his skin, and his fingers and toes began to tingle almost painfully. His hands shook, but all he could do was lay there on the concrete, feeling as though he were about to pass out.

Maybe he did faint – he had no idea how long he lay there in the shade, sucking in hasty breath after hasty breath and wondering what the hell he’d been thinking. He’d been riding long enough to know what it felt like to “bonk,” and should have recognized the warning signs. There might even be some heat stroke mixed in. He wouldn’t know for sure until later on. His riding day was probably over.

Devon opened his eyes. The question had come from a grizzled-looking old man with long white hair. The man was wearing a trench coat, of all things, which was almost laughable in this heat. Except...it wasn’t all that hot. In fact, he noticed for the first time the cool breeze that was already making him feel better. How had the temperature changed so suddenly?

Oh yeah, the old man. “I could—” Devon coughed a few times, his throat almost too dry to form the words. “Water,” he croaked.

“Right. Thought you might need some. Here.” He held out a wizened hand, offering a cup.

With difficulty, Devon sat up and took a sip. The water was cool and felt fantastic, but he knew from experience not to guzzle it. Instead he drank it slowly, enjoying its cool moistness on his parched throat. Already he felt much better, and he sat up completely, shaking his head to clear away the last of the faintness.

“Where you from?” the old man asked. “You look like you’ve been riding a while.”

“Troy,” Devon answered. “Trying to get to Indianapolis today, and St. Louis by the weekend.”

Devon just gaped at him, not sure whether to laugh aloud or proclaim the old-timer insane. Then he started to look around for the first time at what he’d assumed was Richmond. He now realized, though, that this place was far too expansive for that. The fountain he’d collapsed next to sat in a kind of town square, surrounded in all directions by buildings. Tall buildings. In fact, there were so many buildings he could barely see any sky anywhere, except down a couple of the streets. And, through one of these few openings between the towers, in the distance he could see the curving silver arc of the Gateway Arch.

The old man was right. This really was St. Louis.