Yep, still in Canada, and probably will be tomorrow as well. However, I'm down to only a little over 500 miles to go. I think this ride is in its final week.

Today was another one of those days where, looking back on it, I'm not quite sure how I got as far as I did. The 73 miles I managed to go took over 9 hours to achieve and left me drained physically and mentally. Why? It was the wind, of course. It left me alone yesterday while I battled the hills, but today, when I finally made it into a more level area, it howled out of the southeast right into my face. I knew I was in trouble when I left that morning and immediately started fighting a strong headwind (usually the winds don't really get started until closer to noon). It only grew stronger as the day wore on. Worse, all potential tree cover went away until I was out in open land, with nothing to blunt the wind's force. Where was this flat, open land yesterday when the wind was at my back?

But the worst was yet to come. As I rode on, head down, straining against the 25mph (or stronger) gusts, rain clouds began to build on the horizon. I had hoped to get to Renfrew (90 miles) today, having already given up on Arnprior (105 miles), the point at which I finally turn back towards the States. However, the thought of rain slamming into me at 25mph (plus my own speed) as well as the grueling wind battle made me look for a place to stop. I knew Cobden was close, but didn't know how close. I wanted to hurry, but it just wasn't possible to make any better speed under these conditions. The rain started as I saw the top of the town's water tower on the horizon. Head down, I pounded on, and reached Cobden a few minutes later, just slightly damp. Fortunately, there was a hotel (attached to a gas station, of all things), with a pizza place right across the street. By the time I'd showered, the rain had thoroughly soaked the countryside. I can't imagine still being out in that.

Tomorrow, I continue in the same direction (southeast), and if the wind doesn't change I'll be in for another short day. On the other hand, if things improve, I might reach the St. Lawrence by the evening. And speaking of rivers, here's a view of the Ottawa River: 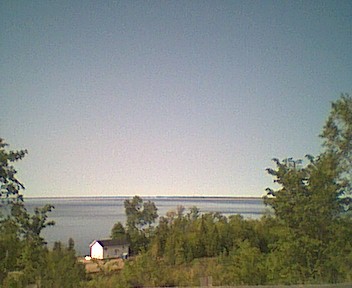 Looks more like a lake, doesn't it? I left the river shortly after taking this photo, and never took another picture during the day. There just wasn't anything scenic, and I was too busy staring at the road, hammering away into the wind, to really see much else. Sigh.