I was looking forward to this day of riding more than most, primarily because the weather was projected to be quite nice - sunny all day with temperatures reaching 16C, and a light northwest wind. As I was heading east and southeast all day, I was hopeful about the wind, but having been burned by "northwest" winds several times already, my hopefulness was cautious. As it turned out, the prediction was correct and the wind wasn't much of a factor today, and the few times I felt it blowing, it only lasted a few moments.

However, the wind was of no real use to me because of my main nemisis on today's ride, hills. Yes, that's right, hills and lots of them. After about 11 miles of flat conditions in the morning (as I finished passing Lake Nipissing), the climbing began. Up and down I went all day long, even while passing through North Bay. (North Bay, like Sudbury yesterday, actually had a "Danger: Falling Rocks" sign along one of its streets.) Once out of the town, I plugged along until I reached the Ottawa River, where my route took me alongside it for the rest of the day. I had hoped this would result in a gently winding, slightly descending trip (as several other river routes have been so far) but no dice. In fact, the hills became much worse. At one point I climbed what must have been a 6-7% grade for almost 2 miles, a small mountain. Later, I rode up a "staircase" of about 4 similar grades, each about a half mile (while the amount of climbing was the same, I appreciated the brief breaks between "stairs"). Here's one such hill: 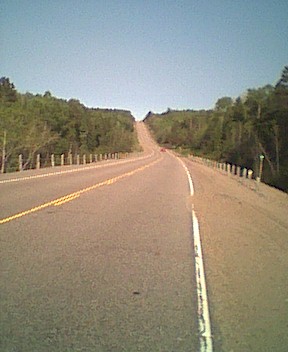 It doesn't look too bad, but keep in mind I'm looking up another slope towards it, and the camera doesn't capture the angle very well. Hills like this one slow me down to about 5-6 mph as I creep up the side, and despite the inevitable descent later, I still lose out on average time.

Even so, I still managed a century ride, but the hills slowed me down so much I was running out of light. The next town was still 20 miles away (probably 2 hours if the climbs continued, so I'd get there just as the sun set assuming nothing went wrong) when I came across a motel in a tiny town called Stonecliffe. I hadn't expected to find lodging in this one gas-station place, and felt lucky to have spotted it. Like many such places I've seen in Canada, it's actually a hotel/restaurant combo, so I had everything I needed (food and lodging) in one site. Plus, when I went to pay for the room, it cost only US$15! This is by far the cheapest motel room I've ever seen. I was feeling pretty lucky about all this until I got to the room, and found out I got what I paid for. Here's a photo: 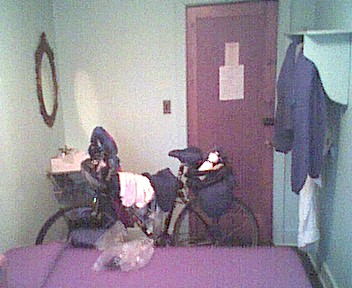 It's more of a prison cell than a room. You can see how wide it is by comparing the distance between the walls with the length of my bike. Yes, the door is really that narrow. In the left corner you can see the sink. There is no bathroom; you have to use a community one (for showers too). There's no phone and no TV (probably wouldn't get cable in this little town anyhow) and the bed is only about 3' wide. What you can't see: There's a second bed and a dresser below the camera level. That's it. Oh, and of course there's no heat control in the room, so I'm going to be cold tonight. I keep telling myself it's not as if I had a choice, I shouldn't have risked trying to make the next town anyway, but it's a small comfort.

Cycling From Bad to Worse

(Note: All of these things happened today.)

Bad: You see a sign indicating a passing lane a couple of miles ahead (this means you'll be facing a steep climb, one bad enough to slow down trucks for a significant length of time).

Worse: The sign shows up while you're ALREADY on a steep hill.

Bad: You're on a two-lane road, and ahead of you, coming in your direction, a truck starts to pass another truck.

Worse: There's no shoulder...and the crosswind is from left to right.

Bad: The road is covered with potholes, cracks, gravel and debris.

Worse: You're on a steep descent.

Bad: You're in a hotel room like the one pictured above.

Worse: A railroad line runs right past the place. (I guess I can forget getting any sleep tonight.)