Another day at exactly 100 miles. I think that's my fourth that landed on that number. I assure you, I'm not going out of my way to arrange this mileage. I just wind up at 100 at the end of the day.

Anyway, got up this morning and faced a strong (27kph) north wind as I headed northeast towards Sudbury. I also climbed a LOT of hills. I doubt I went more than half a mile at a time without a new hill to force my way over. And, as I reached the top of each one, I was struck by a blast of arctic air, because the temperature today never exceeded 10C degrees, even though the sun was shining all day. I rode 43 miles before stopping for lunch at a Subway, and afterwards, I was so cold as I started riding again that my shivering was making it hard to keep the bike going straight.

And that in itself was important, because as I rode today I had virtually no shoulders on any of the roads I traveled. To the right of the white stripe was less than a foot of pavement followed by a drop of a couple of inches and (if I was lucky) a couple of feet of gravel. To slip into that stuff would have probably sent my bike out of control. So I struggled to stay in the tiny area I had allotted to me while being constantly buffeted by gusts of wind from passing trucks. Two of my fingers are still numb from gripping the handlebars tightly all day.

I also got to take the scenic tour of Sudbury, as Route 17 turned into a highway about 10 miles before I reached the city. Fortunately, the side road (Regional Route 55) meandered through the town and ended at Route 17 on the other side. Unfortunately I didn't know this due to poor information from my mapping program (it showed 55 as 17 all the way through, when actually it's marked as 55 on the roads and 17 is never mentioned). Also unfortunately, the quality of this road was extremely poor. I'm amazed I got through it without damage and without getting run over as I dodged the many potholes, grates and deep ruts.

Once out of Sudbury, I climbed and fought the wind to this point: 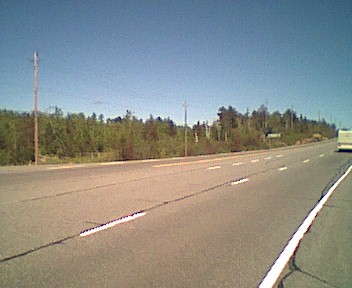 I know it doesn't look like much, but this is actually the furthest north I'll travel on the Bikeabout. Once I left this area, I started to move gradually southeast and the north wind became less of a factor. I won't say the going was easy, but it was at least less challenging than the previous 60 miles. After going southeast for a while I gradually moved more eastward and the crosswinds began, ending any dream of getting to North Bay today (where I would have been able to get a cell signal to upload this page). By the time I got to Sturgeon Falls, my legs were lead weights. So ends another tough cycling day. I really miss the plains.

Here's one other photo I took today. It's one of the many lakes I rode past as I moved through prime fishing country in Ontario. The clear sky shows the kind of weather I'm having now (a far cry from the week of rains I endured before yesterday). If only the winds were more friendly... 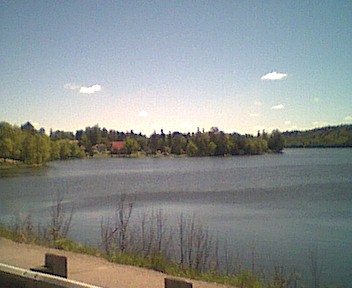