It looks like I might have limited cell phone access after all, so hopefully this page will get updated tonight. I can't guarantee any further updates will get posted, but I'll upload them when I can.

Today was another grueling wind- and hill-fighting battle (at least it didn't rain, for the first time in over a week). Once again the weather report said I'd have a northwest wind, but it didn't turn out that way. Instead, it blew out of the north or northeast all day, and it was at least 20 mph (the Canadian equivalent of the Weather Channel said it was gusting as high as 40 kph). Nearly all of the route was through twisting, winding curves and up and over hills, with the wind blasting at me all the way along. And, of course, when I had a chance to stop early, I decided to press on to my planned destination (Espanola), hoping to find a motel with a laundry service (I didn't). By the time I reached my stopping point, I was exhausted. My legs hurt more today than they have in quite a while, even through the many days of headwinds I've faced recently.

Here's a sample of the kind of terrain I saw all day here in Ontario. This is one of the few relatively flat spots, by the way. 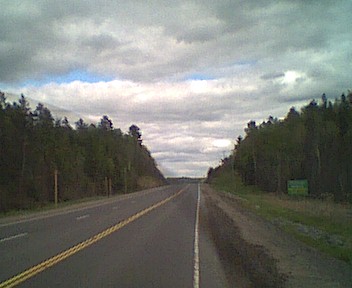 In amidst the struggle against the wind and constant climbs, I did see some beautiful scenery. Here's an example of one of the rivers I crossed (and got very close to): 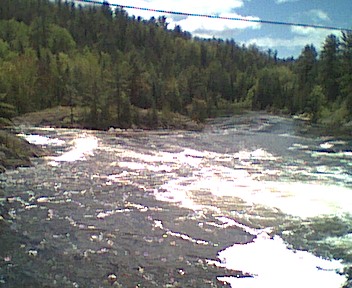 Because the main language is the same in Canada as it is in the US, I often find myself forgetting I'm in a foreign country. There are a lot of similarities. For example, phone numbers use the same kind of area code system and you don't have to use international calling to reach the other side of the border. Car license plates are similar, and the cars are the same size and shape (not like, for example, those in Europe). Roads have the same kind of lines (e.g., a solid yellow line means no passing while a dashed one means passing is OK) and the same kinds of signs. And so on. However, there are still enough differences to remind me this isn't the USA. Some examples:

Naturally, there are plenty of other differences, but these are the ones that jumped out at me while cycling through Ontario.

One other thing. I find it interesting that the exchange rate of US to Canadian dollars is almost identical to the conversion rate of miles to kilometers. Is this just a coincidence, or one of those strange mysteries of the universe that would drive you crazy if you ever completely understood it?