Unfortunately, last night I couldn't sustain a connection to upload my daily report and warn all of you that I was entering Canada today. While in Canada, it turns out I won't have any cell phone access at all, so I can't upload any pages. I suppose in a few days you'll get a whole bunch of pages all at once. Sorry about that. I hope no one worried too much about what was going on.

Anyway, today was my longest ride in almost a week. This happened despite an annoying pseudo-northwest wind (much like the one of Day 16). It taunted me by blowing all the flags I passed (and there were a lot of them this morning, it being Memorial Day and all) in my direction, but it wouldn't help me one bit. The best I could expect all day was a neutral situation, as though the wind weren't blowing at all. If I tried to go faster than 12 mph, the wind was in my face, fighting me, no matter what direction I was going. Nonetheless, I was determined to get a century today, and succeeded.

I had a bit of an adventure trying to get across the bridge into Canada. First I had to find it. I couldn't approach it on I-75 because it was a restricted access highway, so I tried to take an alternate route and turn back to the entrance to the bridge. This wasn't marked, however, so I missed it and wound up having to backtrack. Once at the entrance, I then discovered (at the customs booth) that it was only a two-lane bridge (!) and had no pedestrian or bicycle access at all. Attempting to cross a three-mile, two-lane bridge in what felt like 20mph crosswinds would be suicide, if it had even been legal. Further inquiries revealed that there were no ferries or other means to get to the other side. So, I was stuck.

Fortunately, the people at the toll booth took pity on me and arranged for a maintenance van to lug me and my bike to the other side. While I appreciated this kindness, I worried that accepting would taint the ride, which was supposed to be entirely under pedal power. However, it's not like I had a choice. It would have been one thing if I'd had an option to ride over and taken the easy way out, but crossing by bike or by foot wasn't allowed. So taking a trip by van was really just another ferry ride over an otherwise impassible body of water (and I've already taken ferries, back on Day 2). Just like the Vashon Island ferries, I'm obviously not counting those miles in my total. Oh, and while on the bridge, I did manage to snap off a photo: 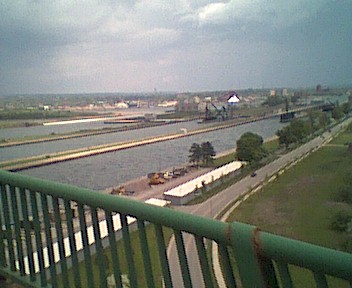 Once in Canada, I battled my way through the street maze to Route 17, but managed to forget to exchange currency, so now I'm stuck paying for everything with a credit card until I can get to a bank. Canada has some different road signs, but otherwise the roads are much the same as they are in the States. Drivers still give me plenty of room, and the shoulders are about comparable to those in Washington, with varying widths and roughness. Hotels seem plentiful, though we'll see how many I find tomorrow, when I expect to have to stop well before the next major city (Sudbury).

Also today, once again my effort to "go the extra mile" was not rewarded. It seems like every time I decide to press on and shave another 10 or 20 miles off the trip, something happens. Either I get a flat tire, or a paranoid farmer throws me out in a storm, or lightning bolts come down from the skies, it's always something. I was in a small town at the 88-mile point, with a hotel and restaurant readily available, but I already knew about a hotel in Thessalon (from a billboard) and decided I could handle another 12 miles (it was only 5:30). With only 5 miles to go, a thunderstorm blew up behind me. I then played "race the storm" as I hurried along. Lightning flashed in the distance, but it was a long way off, at least 15 seconds between bolt and thunder. Another mile and it was down to 13 seconds. It began to rain lightly. I raced faster, climbed a hill, and saw the sign for Thessalon in the distance. More lightning...10 seconds this time. The rain got harder and I moved even faster. I climbed a hill...and there was the hotel. I pulled in and watched the storm blow by, never quite reaching me. I just barely missed it.

The hotel actually is on a beach of Lake Huron, and is very picturesque. For example, here's a view out of the picture window in my motel room. The sunset over the lake was quite relaxing, as you can well imagine. 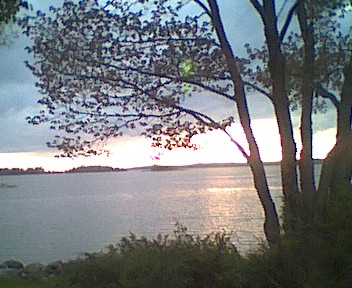