Today I found out firsthand that people like the Cold-Hearted Farmer (see Day 13) are fortunately not in the majority in this country. But I get ahead of myself.

The weather actually looked better today when I got up. The wind was out of the north, which, while not a tailwind, at least wasn't another headwind. The temperature was already at 50F, and was expected to reach 60. And, best of all, it wasn't raining. I got a hopeful start, but shortly after leaving the rains began, and I was just as cold and wet as I'd been the previous several days. After climbing one large hill, things flattened out for a while and I made decent time, primarily because the north wind wasn't interfering. The 12 mph average I made for about four hours was my best pace in five days.

At about 3pm, I reached my destination of Newberry, where there were several hotels. I stopped here for a break at a McDonalds, and a nice passerby (who was very interested in my trip) informed me that I wouldn't find another place to stay until Raco, about forty-five more miles east. Well, it was only 3, and I felt pretty good, so I decided to try it. (It just didn't seem right to stop so early.) If I could maintain the 12-mph pace, I'd be there by 7, with almost 2 hours of light to spare in case things went wrong.

Unfortunately, the wind decided to shift and come out of the east, and the going got much tougher. My legs, which had felt OK after the break, began to get tired quickly. Then it started to rain again, and I decided if I saw anyplace to stop for the day, I'd take it. I found a likely target at Hulbert, where I spotted a motel at the top of a tough hill. Though I doubted it would have cable (the area is pretty remote), I was ready to quit, so I did. This turned out to be my best decision yet. Here's a photo of the Hulbert Hills Motel office, so you can get an idea of how things looked before I go on. (Note: The actual hotel rooms are off to the right. I wasn't actually going to be staying in this little building.) 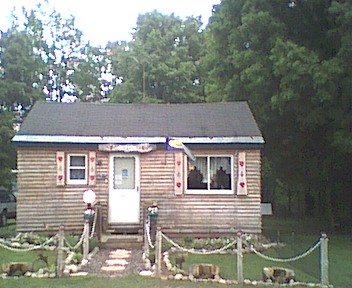 As it turns out, the couple who run this place (Dennis & Meg) are the nicest people I've met on this trip to date. They were genuinely interested in my adventures and happy to share some experiences they've had with cross-country cyclists in the past. They were also willing to bend over backwards to help out a tired and soaking rider after a tough day. Here are just a few examples of the things they did for me:

Anyway, without a doubt this was my best stay of the trip so far (and it's going to be hard to top). If you're ever in the eastern Upper Penninsula of Michigan, whether it be for cycling, hunting, snowmobiling, camping, or whatever, go out of your way to find this place: Hulbert Hills Motel, on Michigan Route 28 at Hulbert Corners, PO Box 97, Hulbert MI 49748, (906) 876-2328. Agent One gives it his highest recommendation.