Yet another long ride, but unlike the previous ones, this one was not at all easy. The weatherman forecast a 25 mph northwest wind, but it died out shortly after lunch. Even so, I was making great time, so when I got to Culbertson (the last town in Montana with a hotel) I decided to press on. Williston was only 43 miles away, I figured, and I still had plenty of daylight left. I can make it.

Bad move. Turns out the east side of Montana is not nearly so flat as the central part, and I soon found myself creeping up hills as bad as any I'd seen in the Rockies. There was always a big descent after each climb, but never enough to give me enough speed to top the next hill (which always seemed to be taller than the last one). Even so, I might have made it with plenty of time if not for the thunderstorm.

All day long I'd been drizzled and rained on by passing clouds. When the sky behind me darkened again I just figured it was another shower. Then I heard the thunder. To a cyclist out on the open road, the message thunder sends is "start looking for shelter." Unfortunately, I didn't see anything. I was in the middle of nowhere. I rode on, hoping I could find something before the storm front reached me. Then, just as the rain and wind began, I saw a little farmhouse. Hurriedly I dismounted and ran towards it, hoping to take shelter in the leeward side of the building. From nearby, someone yelled, "What are you doing?"

Already soaking wet and cold, I replied, "Would you mind if I took shelter here from the storm?"

"Yes, I would!" came the angry voice.

Immediately I turned around. "All right, I'm leaving," I called back over my shoulder. I hurried out to the road, rolled the bike into a ditch, and ducked down into it to keep out of the wind as much as possible. Fortunately, I carry an umbrella, so once I got that out I was able to stay reasonably dry. The rain got much worse, and there was hail as well, but eventually it went away and the sun came back out.

Now, thunderstorms are a fact of life while cycling cross-country. I've sat through many others, sometimes under trees or bridges, other times in restaurants or other buildings I've found in the desperation of the moment. But I have never had anyone turn me away, back into the storm, when all I wanted was to keep out of the wind and rain and then be on my way. So, to this unknown, cold-hearted farmer, I give a hearty "Screw you!" May you get turned away the next time you need help or shelter.

As for Montana, I promise not to judge it on the merits of the last person I met before departing. Everyone else I met was very friendly, and most were happy to chat about cycling, nearby hotels, and the like. I think I just picked the wrong farmhouse to get stuck in a storm near. Anyway, I'm now in North Dakota, as you can see from the photo below. In the distance behind the sign is the thunderstorm that got me. 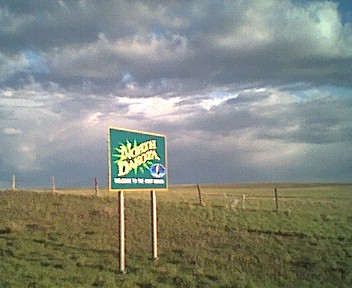