I had two options today: Ride to Stanley or press on to Minot, 125 miles away. Any of the previous three days, I could have taken the longer trip, but nothing seemed to go right today. First off, after getting in late last night, I discovered I'd crossed into Central time, so I was an hour later getting to bed than normal. Thus, I was subsequently late getting up. Then, I spent the first two hours this morning fighting a 25mph crosswind during the 15 mile or so ride north before Route 2 turned east again. By the time I reached my lunch spot, I was already exhausted, so I rested there a bit longer than usual.

After that I started to notice a peculiar wobble in my back wheel as I rode along climbing hill after hill (making very poor time). I stopped twice to true the wheel as best I could, but it still wobbled like it had a broken spoke. All sorts of bad thoughts started going through my head...did I have a bent rim? Was the wheel about to collapse? The nearest bike shop was in Minot, still 80+ miles ahead, and at my pace I wouldn't get there until after sunset and after the shops closed.

When I reached Stanley I asked some locals if there were any hotels between the town and Minot, hoping for a safety net if I ran out of time, but there were none. No hotels for over 50 miles! It was Stanley, with four hours of daylight left, or risk Minot and hope nothing went wrong. The memory of yesterday's thunderstorm was still fresh when I gave the wheel another spin, looking for the reason for the wobble. Now I saw it. The sidewall was wearing away from the rim! See what I mean in this photo: 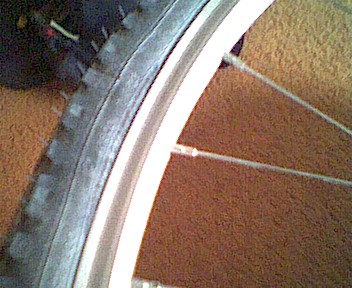 It's hard to see in this grainy shot (my digicam isn't designed for close up work) but if you follow the edge of the tire along the rim, you can see the wear. The sidewall line also curves away, showing how the inner tube is now trying to force its way out through the worn spot. If I'd continued on this tire for much longer, it would have continued to pull away from the rim until the tube poked through and burst - probably destroying it, and possibly resulting in disaster for me (this is not something you want to have happen if you're on a downhill run or if a truck's passing you).

Anyhow, I had a spare tire (you can see it if you go back to Day 10 and look at the first photo - it's under the seat, with the spare water bottle resting on it). However, by the time I could swap them out, I'd definitely be out of time to get to Minot, even at my best speed. Oh well, I needed a short day anyway, after the marathon 300+ miles of the previous two days. Tomorrow I'll try another century and we'll see what happens.