Another day, another mountain to climb. Today I set off knowing there was a hefty mountain ahead and that it ended at the top of Crawford Notch, a pass in the middle of New Hampshire. I even knew how far away this was: 45 miles. My hotel was at 400 feet, and the Notch was at 2100 feet above sea level, so I had some significant climbing to do. Not as bad as the Cascades or Rockies, but still hefty. Just like yesterday, the first few miles were fairly easy, with views like this one: 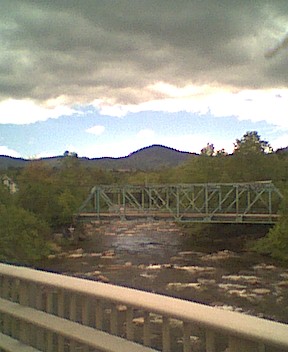 After a while the clouds went away and I rode on upwards towards the sun. Once I got to Littleton and had a brief bite to eat, the climbing got tougher. I heaved myself up a mile-long 7% grade on the way to Pierce Bridge, then things smoothed out and I went up gradually. Slowly the miles ticked off and I looked around every corner anxiously, waiting for the final steep climb to the top of the Notch, after which I could descend for the rest of the day. Finally it started, and I slowly crept up the slope...only to have it end after only a half-mile, leaving me at the summit. All the long gradual climbing must have taken me almost to the top! I wasn't even tired, and it was almost a let-down after getting so worked up...almost. This was the sight that greeted me as I looked down into Crawford Notch State Park: 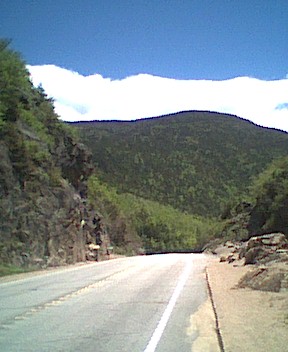 Just before I took this shot I passed a sign that warned of a 13% grade descent ahead, and this made me very glad I didn't try climbing the Notch from the other direction. I rode down this hill with both brakes clenched, afraid that if I let them go, I'd hurtle into the guardrail at the next curve, or lose control when I hit one of the many cracks in the road. After a while it became more gradual and I let myself coast, stopping to take photos of views like this: 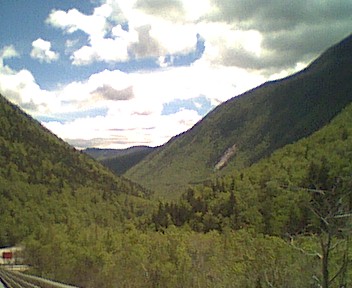 I'd hoped to spend the rest of the day cruising downhill, but the road actually leveled out and I returned to a series of low, rolling hills, which is what I expect tomorrow to be like. It's also expected to be a beautiful day, without even a chance of rain, and with favorable winds...the first time I've had that combination in a long while.