Today's objective was to get across Vermont. Though my route was less than 80 miles, Vermont showed me why it was known as the Green Mountain State. See what I mean: 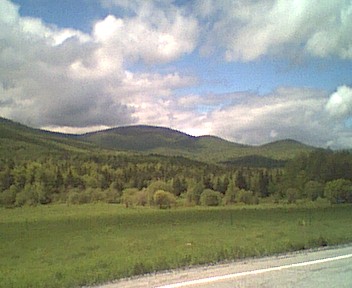 I had to climb a couple of those mountains. I started off the morning with a couple of miles of steep ascent out of Burlington, followed by a 40-mile gradual ascent to Montpelier and Barre. During this part of the ride, Route 2 (yes, the same Route 2 I had been on up until I got to Canada) followed I-89 through some nice scenery and along a lovely river, treating me to views like this: 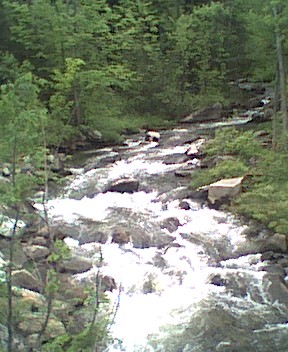 Then things got hairy. The next 20 miles or so were one long climb, broken by a brief descent that served only to trick me into thinking I had crested the mountain. Most of the hills were moderate to severely steep, and for one period of about three miles I just slowly crept along in the lowest gear, sweating profusely and hoping for a slight gust of wind to cool me off. The wind didn't come until near the end of the climb, when it basically signaled (by coming over the top of the mountain) that I was done with the ordeal. Then I just coasted downhill all the way to New Hampshire, enjoying the afternoon sun and more nice views like this one: 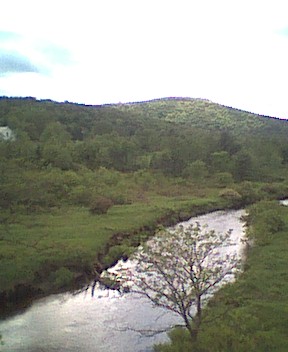 Unfortunately, my mountain-climbing isn't through yet. Tomorrow will be much like today, with a gradual ascent followed by a mountain and another long downhill stretch. Trust me, it's thinking about the long descent that gets you up these things in the first place.

The next day was as fun as he’d hoped. Devon played around with the line, seeing how short or long a jump he could make. Going from Houston to Dallas was as easy as Dallas to Sacramento, though the length of time under the strange gray sky varied with the distance of the trip. He didn’t even need a direct road between towns, he discovered. As the highlight of his day, he went from Miami to Seattle in a single shot. It took almost fifteen seconds of gray to get him there, but it worked. The Mariners put on a pretty good game that evening.

He still had a lot of questions that needed to be answered, though, so the next day he set out to learn more. He hoped to get some information from another White Liner, so he visited several major landmarks and watched for arrivals. There were many cyclists, but he never saw one appear from thin air. He thought about just asking someone, but remembered what the old man had said. If he gave out the secret, it wouldn’t work any more.

He went back to St. Louis, looking for the old man, but he was nowhere to be seen. Devon wasn’t surprised. Finding just one man in a city that big would be all but impossible. Or would it? Could he use the white line to transport himself to a person instead of a place? He tried it, but nothing happened. Maybe that had something to do with the taboo against talking to people about the power. It made some amount of sense. Appearing in front of someone would pretty much rule out any other kind of explanation, wouldn’t it?

He went back to experimenting with traveling and visiting new cities. He had clam chowder in Boston, and jambalaya in Shreveport. He saw a movie at Mann’s Chinese Theater and enjoyed the view from the top of the Space Needle. He caught an early ball game in Atlanta, then zipped to the west coast for a late-starting game in Anaheim. He skipped across borders, getting a tequila in Tijuana and sipping it while enjoying a scenic view of the vast forests near Vancouver. He couldn’t remember when he’d had so much fun in his entire life.

The next morning, he rose early and zipped across the continent to New York, where he had a new experiment to try. He wondered if he might have tea and crumpets for breakfast in London. So far, he’d limited his travels only between towns on the continent, but he couldn’t see why there wouldn’t be lines of power across the ocean as well. People traveled to those places on aircraft and ships, so it made sense that there’d be lines between the major destinations. As long as he stayed on those routes he should be okay.

He rode to a spot near LaGuardia and watched the planes take off. Every now and then one would head out over the ocean, going east. As it climbed, it left a white line trail behind it. That was the line he’d follow.

He started riding towards the ocean, concentrating on that line, and thinking about Big Ben.

The man who called himself Marvin Taylor watched from the window of a nearby building as Devon moved through the street. The old man shook his head sadly as the cyclist disappeared. He sighed to himself. Too bad, he thought. This one certainly had developed excellent control, and very quickly too.

It was always the same, he thought, each time a new talent appeared. They always burned themselves out, always went one step too far. They never stopped to consider the possible consequences. The thirst for more and greater power always consumed them. The need to expand their boundaries and test their limits would never cease.

At one time he’d tried to instruct them. Even then they didn’t listen. Always they ignored him, trying to go farther, faster, higher. Eventually he’d given up being a mentor. Now he just explained a little of the facts, and let them play around. Telepaths, pyrokinetics, transformers, he’d seen them all come and go. This one was a teleporter, though uniquely tied to his bicycle, which was interesting. The lame story about the white line had worked pretty well, the old man thought to himself, but there was some truth in it. Magic really did flow across the land, following lines of power. Too bad it didn’t go across the ocean.

He sighed, but was not upset or distraught at this latest failure. Once, a long time ago, he had cared about finding a successor enough to try to train them every step of the way. The world had paid the price for that failure, and he would never let himself forget Morgan le Fay. No, if his time were to come, it would have to be in the form of a self-taught, self-controlled wizard who found his own path. Until then, Merlin could wait. He’d waited for this long, hadn’t he?

Turning away from the window, he decided a cup of clam chowder would hit the spot this morning. He stepped through the doorway and emerged in his favorite Boston restaurant, where his usual table awaited him.

“Holy smokes, Hank, take a look at this.”

The big fisherman ambled over to the net his co-worker had just hauled aboard the trawler. Embedded in its webbing amidst the squirming fish was a relatively new touring bicycle, one waterlogged pannier still dangling from the rear rack. “Nice bike,” Hank observed. “Now, how do you suppose that got all the way out here in the North Atlantic?”

“Beats the heck out of me.”