This morning I set out on what will likely be the longest ride of the rest of the trip. Fortunately, the winds were in my favor for the first half, as I headed east across upstate New York. The first ten miles were uphill, but after that I coasted to the border of the Green Mountain State (that name doesn't bode well, by the way). 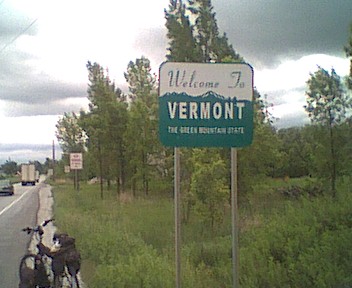 Once in Vermont, I crossed a couple of islands (I haven't ridden all the way across an island since Day Two) and was treated to views like this: 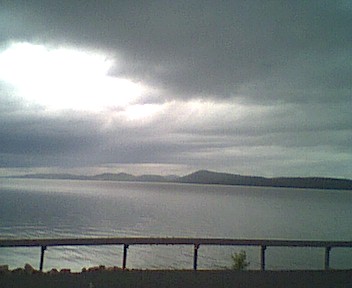 Too bad it was overcast all day. This would have been much more scenic with a little sun. (It rained on me a few times, but never for very long, and now it looks like the rain's over for the rest of the week.) Even so, the ride across the islands of Lake Champlain was one of the best times I've had on this trip. Anyone who's into boating should check out this part of the country.

After I left the islands, I had only about 10 miles to go to get to Burlington. Unfortunately, these proved to be the most difficult miles of the day. The wide shoulder I'd enjoyed since entering Vermont disappeared, dark clouds moved in, and it started raining. Then the hill-climbing started. It seemed to take forever to get to Burlington, but the potholes and traffic didn't stop me, and here I am.

Remember back on Day 10, when I said I hoped there weren't going to be any mountains the rest of this trip? Well, I'm sitting at the bottom of one right now. Tomorrow I'll try to climb it. After that it's the final run to the coast.

The cooler Missouri air felt much better than the massive heat he’d been experiencing in Ohio. This worried Devon, who was afraid the hot conditions might have been part of the formula. He hadn’t eaten anything, and while he’d refilled the CamelBak, he hadn’t used it. He still felt somewhat wobbly as he headed out of St. Louis on Route 40, but this time he had several energy bars available to use after his little experiment.

Part of him doubted very seriously that this was going to work. The other part argued that it already had, and he was on the verge of something that would change his life. If he could control this power, he could go anywhere, do anything he wanted. He could even go to a Cardinals game any time, not just when they were playing the Reds in Cincinnati. The possibilities boggled the mind.

He stared at it as he rode. The shoulder was fairly wide here, but he kept his wheels on the line, thinking about Denver. He’d been there only a few times, and had no landmarks to focus on, so he just thought about Coors Field, where the Rockies played. He was thirsty, but he ignored the water nozzle dangling near his face, and pedaled hard, trying to wear himself out.

It didn’t take long. He hadn’t eaten a thing since his near-bonk a couple of hours ago, and the ride to this point had drained all the energy he’d recovered during his rest at the fountain. His stomach was beyond growling for food, and instead just ached distantly. He was fatigued beyond belief. Still, he concentrated on keeping his wheels on the white line, his legs pedaling away almost of their own accord. Denver. He forced himself to think about Denver. He wanted to see a Rockies game tonight.

This time he felt something just before the transition. It was something like a wave of tingling through his body, as though he almost shivered. He looked up to see a flat gray nothingness, with a single white line stretching toward the horizon. It was working!

He continued pedaling, not sure what else to do. Last time, in his shock, he’d braked instinctively. This time he just rode on, looking around at the strange view. Without warning, it shifted, and he found himself looking at Coors Field.

He came to a stop quickly, afraid he might run into something, but he was still on the side of the road, on the white line. The entrance to the parking lot was just ahead, though only a few cars were present. A huge sign announced tonight’s ball game started at 7:10 pm.

Devon raised his arms to the air and let out a loud whoop of triumph. It had worked, and he’d controlled it!

Then, exhausted, he collapsed onto the ground.

The next day, as he started on the road out of town, he went over what he’d thought about the night before during the baseball game. It wouldn’t do to have to continue bonking in order to use this power. It put too much stress on his body, for one thing. What if he came out of the transportation effect in an intersection? So far re-entry was pretty smooth, but that probably wasn’t guaranteed. He had to be ready to react, and if he were near fainting, that wouldn’t happen.

Thinking about it, he’d realized there were only three things in common with the two trips he’d made so far. One was his fatigue, another was his hunger and thirst, and the third was his utter concentration on the white line and his destination. The Denver jump had eliminated the heat and weather conditions from consideration. Perhaps he could get rid of the other troublesome factors if he could get the concentration right.

The old man had talked about focus. Maybe that was all he really needed. So, he ate a hearty breakfast this morning and had plenty of water. He was ready for a long day of riding, if that’s what it took to figure this thing out. Using local roads, he made his way to Route 6, which eventually joined I-70. He hoped to jump over it in the same way as he had the day before.

He had trouble at first. He concentrated on the line and the destination as best he could, but couldn’t seem to get the power to work. He wound up traveling back and forth over the same stretch of Route 6 several times. Anyone who’d seen him go by over and over was probably thinking he was nuts.

After about three hours of trying, he finally felt the tingle and looked up to see the now-familiar gray, featureless plain. A moment later he was on the Strip in Las Vegas, where he pulled up onto the sidewalk and dismounted. No one paid him any heed, which he found strange. Wouldn’t a cyclist appearing in the street at least attract some amount of attention? Maybe no one had seen him, or maybe his sudden arrival was such a non sequitur that they just assumed they’d been mistaken about what they’d seen.

That was just the smaller mystery, however. What he didn’t understand was why he couldn’t use the power right away, but later on (without changing anything in the formula) it activated. He wasn’t hungry or fatigued, so that couldn’t explain it. He knew his concentration on the goal and the line hadn’t been any more intense when it worked than when it didn’t. What was the connection?

He got back on the bike, determined to figure this out, and headed west out of town. It was hot, but he ignored the sun, intent on the mystery. After about half an hour of riding, he transported himself to Los Angeles. Another half hour later and he was in San Francisco. Next it was Seattle, where arrived in the rain.

Over lunch, while drying himself off, he mulled this over. Why had it taken so long to get this to work at first? Was it just too early in the day? Maybe he’d been too tired to get focused? No, that didn’t seem right. It didn’t take him too long to get going in the morning. Maybe he hadn’t been warmed up? Hmm...there could be something there. Each time he’d used the line, he’d been rolling along smoothly, pedaling evenly, everything in balance. Maybe the secret was as simple as being in the groove.

The rest of the afternoon proved this theory. By the end of the day, he could access the line after fifteen minutes of smooth riding, once his muscles were loose and his breathing steady. He’d also made almost a complete circuit of the country, ending the day watching a Florida Marlins home game and thinking about all the things he could do tomorrow.